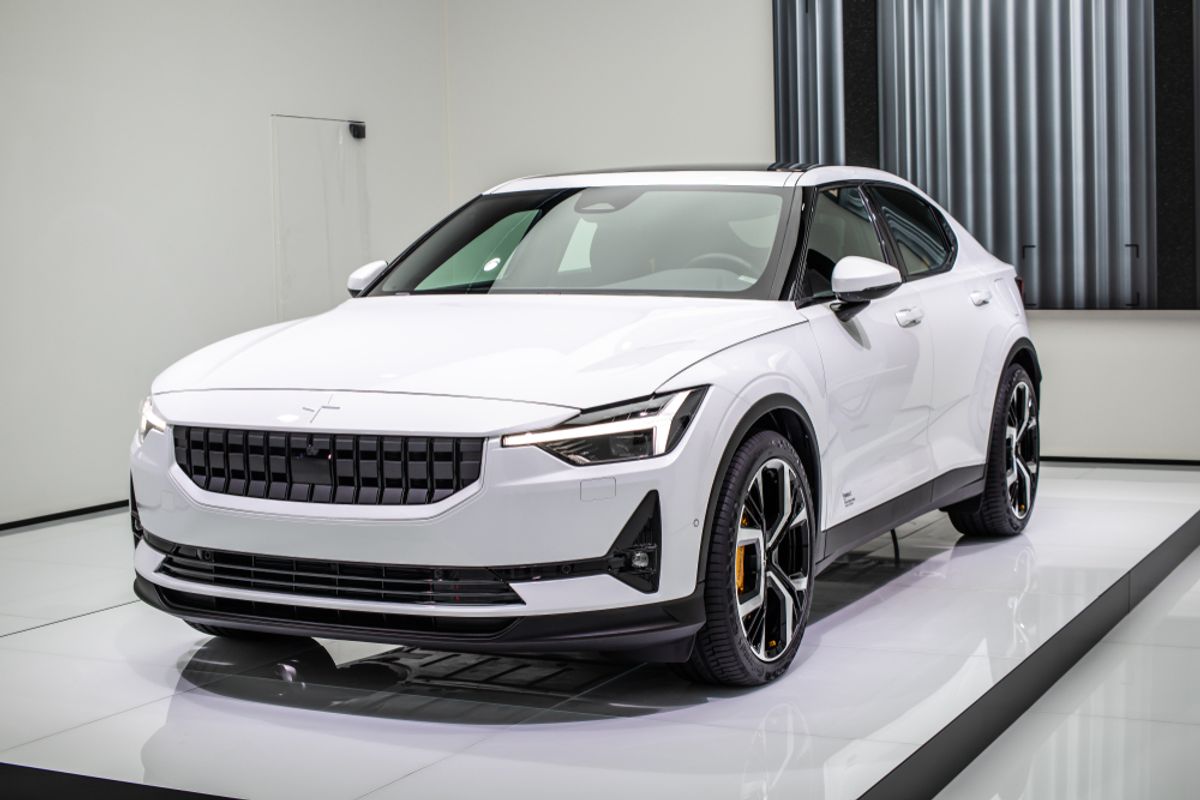 The Polestar 2 is a relatively new entrant into the electric car market, boasting a 0 to 60 time of seven seconds, 231 horsepower, and up to a 270-mile range for its front-wheel-drive option — or a head-turning 0 to 60 in 4.5 seconds with close to 250 miles on one charge for the all-while drive option. The price is reasonable for high-performance electric vehicles, starting at around $46,000 — but with a price tag like that, you might want to do some comparison shopping.

Here are 12 cars similar to the Polestar 2. 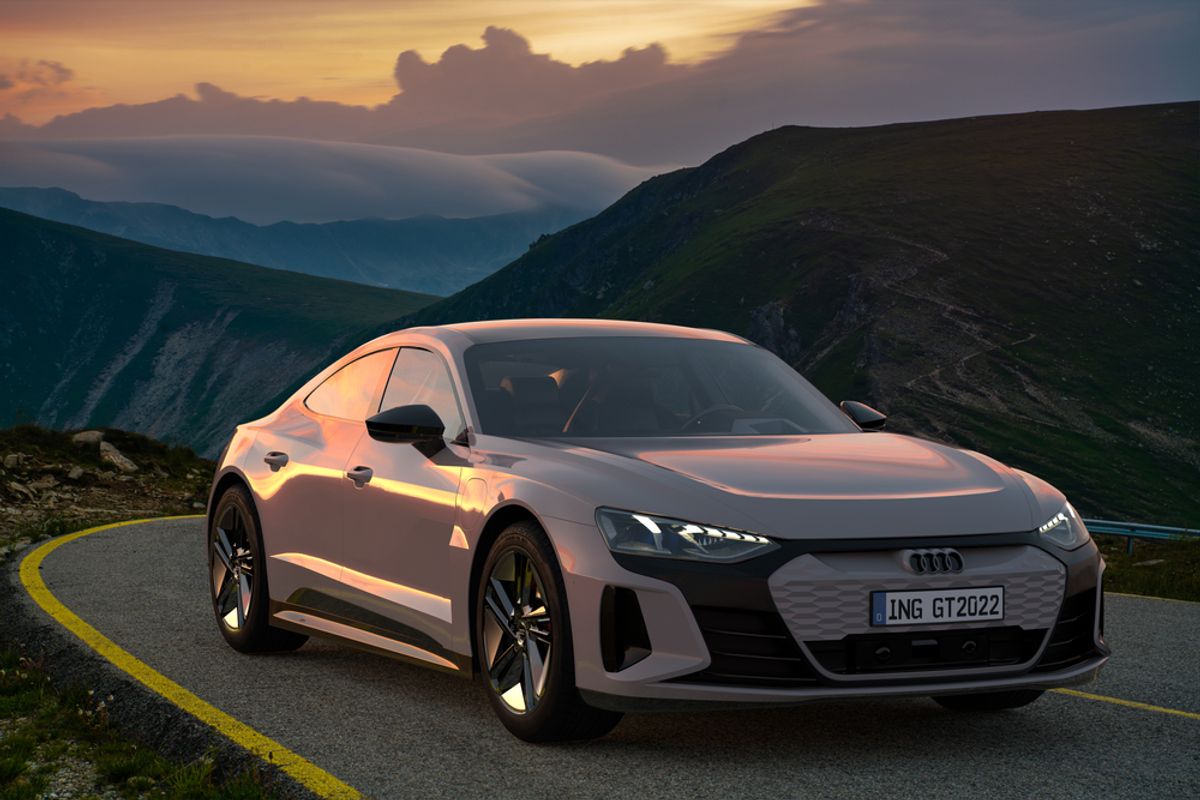 The luxury SUV, starting at just over $65,000, brings the performance you’d expect from Audi via an all-wheel driving system that brings some flashy stats. With its boost engaged, it can manage more than 400 horsepower and 490 lb-ft of torque, getting from 0 to 6 in 5.5 seconds. It also has an impeccable design, with a front grill going a long way to making it one of the more attractive electric cars out there.

Its driver assistance will even step in and brake for you if it senses a collision is imminent, helping contribute to its 5-star safety rating from the National Highway Traffic Safety Administration. 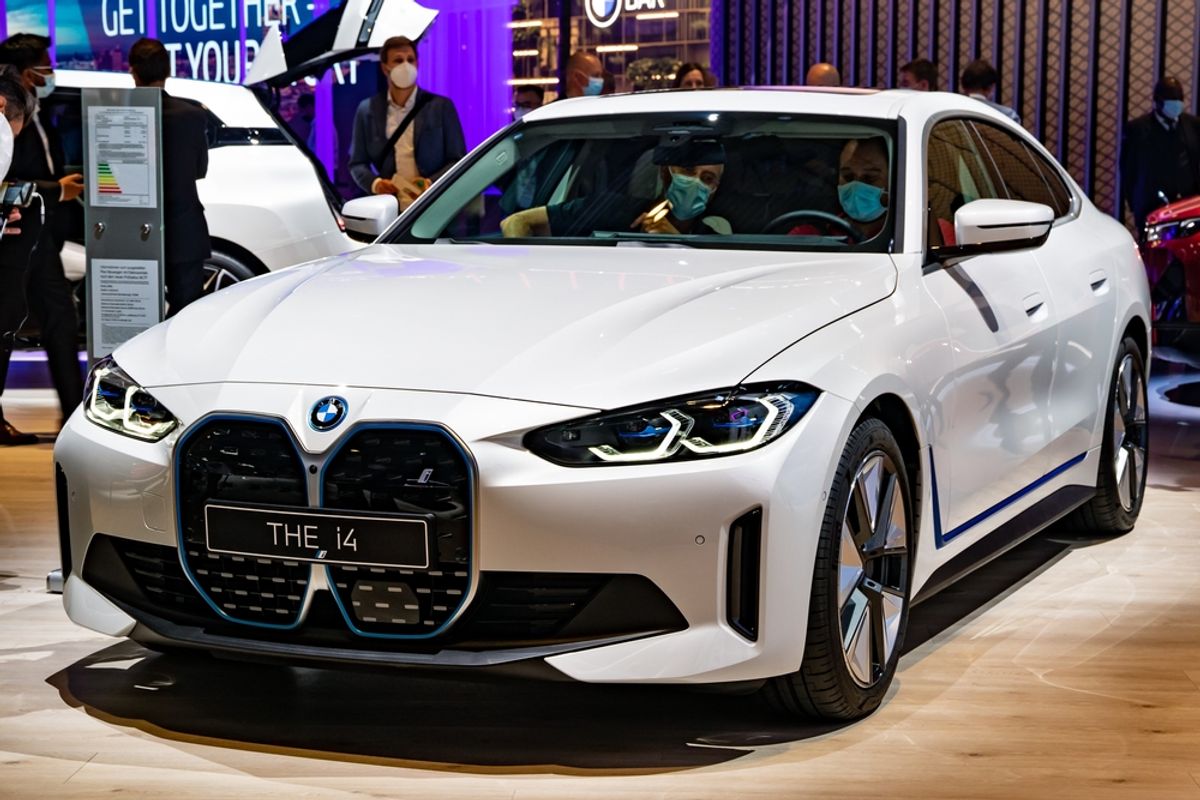 BMW’s dabbled in electric vehicles for a while, and now it’s rolled out two versions of its i4, with the eDrive 40 version (with 335 horsepower and going 0 to 60 in 5.5 seconds) priced around $55,000, and the M50 running about $65,000 (with 536 horsepower and a 0 to 60 time of 3.7 seconds). Both four-door sedans bring the class you’d come to expect from a BMW, with a sleek exterior and a stylish interior with leather and Sensatec options, standard features like a moonroof and power tailgate, and an optional Parking Assistance Package to help secure your vehicle when you can’t be driving it. 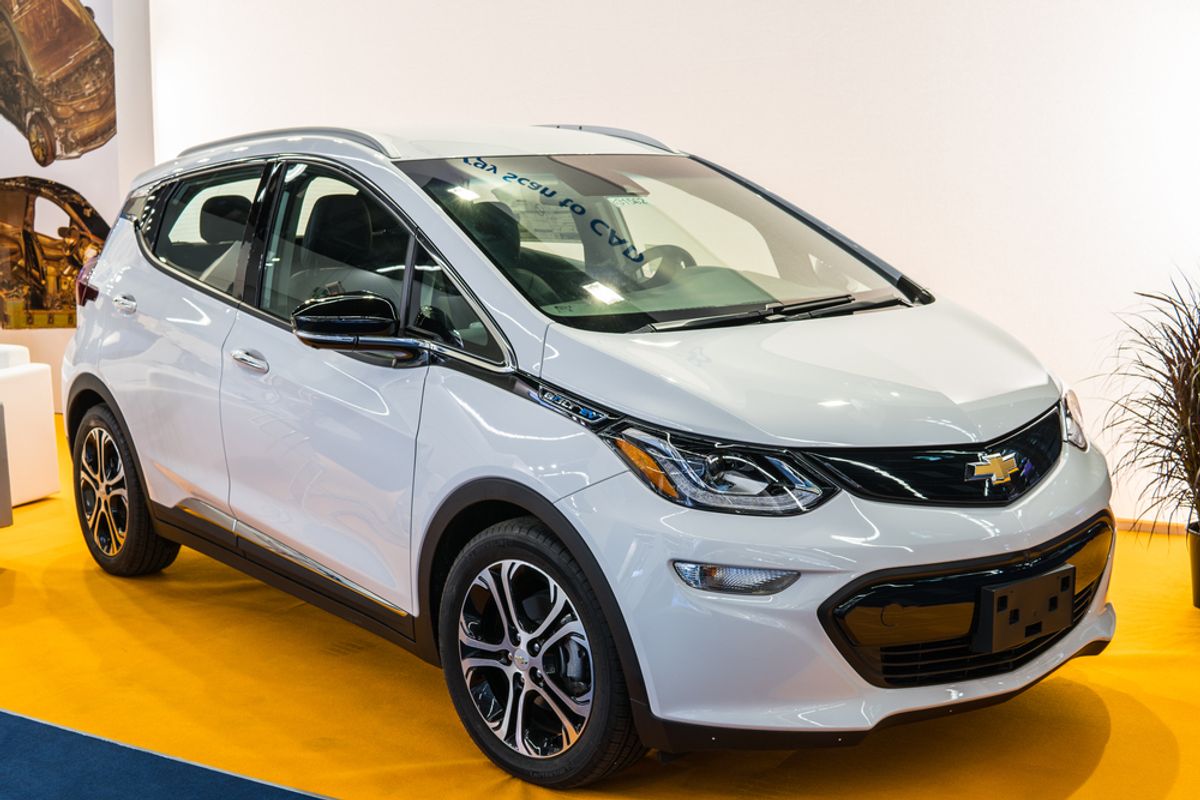 Chevy now has two versions of the electric vehicle which it has featured since 2017; the EUV is distinct from its EV hatchback, feeling and driving more like an SUV, and being decidedly roomier. It delivers a 247-mile range on a charge, 7-second 0 to 60 acceleration, and 200 horsepower. There’s one particularly special feature that drivers will certainly be curious to try — a hands-free option that works on more than 200,000 miles of American and Canadian roads, providing the ultimate in driver-assisted driving.

The car company’s also looking to entice drivers to go electric by footing the bill for Level 2 charger installation in each new Bolt owner’s home. 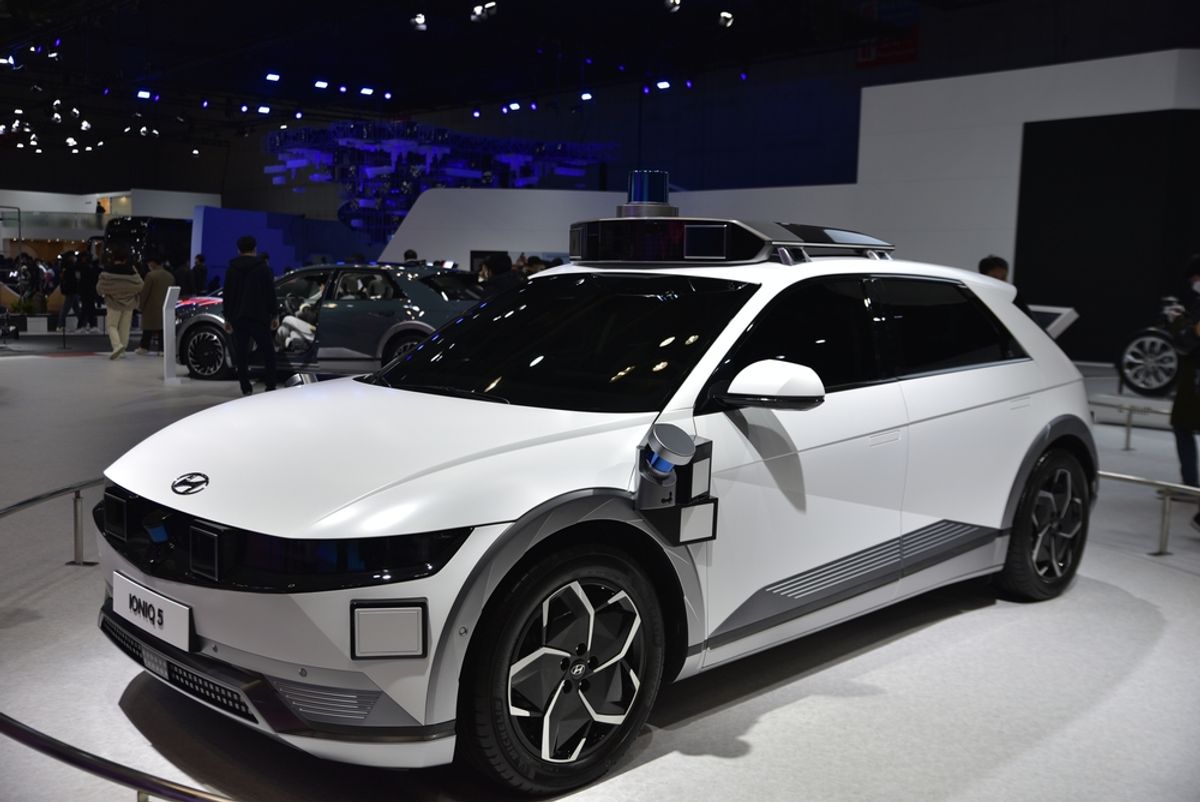 Hyundai come a long way in recent years, and the all-electric IONIQ 5 is evidence of how competitive the South Korean car company is with its Japanese, German and American counterparts. The IONIQ 5 delivers just over a 300-mile range, and Hyundai’s looking to entice buyers with two years of free 30-minute charges for the $40,000 to $50,000 price tag, depending on the model. With 225 horsepower and a 7.4 0 to 60 time to start, it’s not the spunkiest of choices but definitely gets the job done.

It also boasts a variety of features, like blind-spot rear monitors, remote smart parking assist, and a hands-free smart liftgate, making it an appealing selection for drivers thinking about navigating cities and suburbs with kids rather than bolting for the open road. 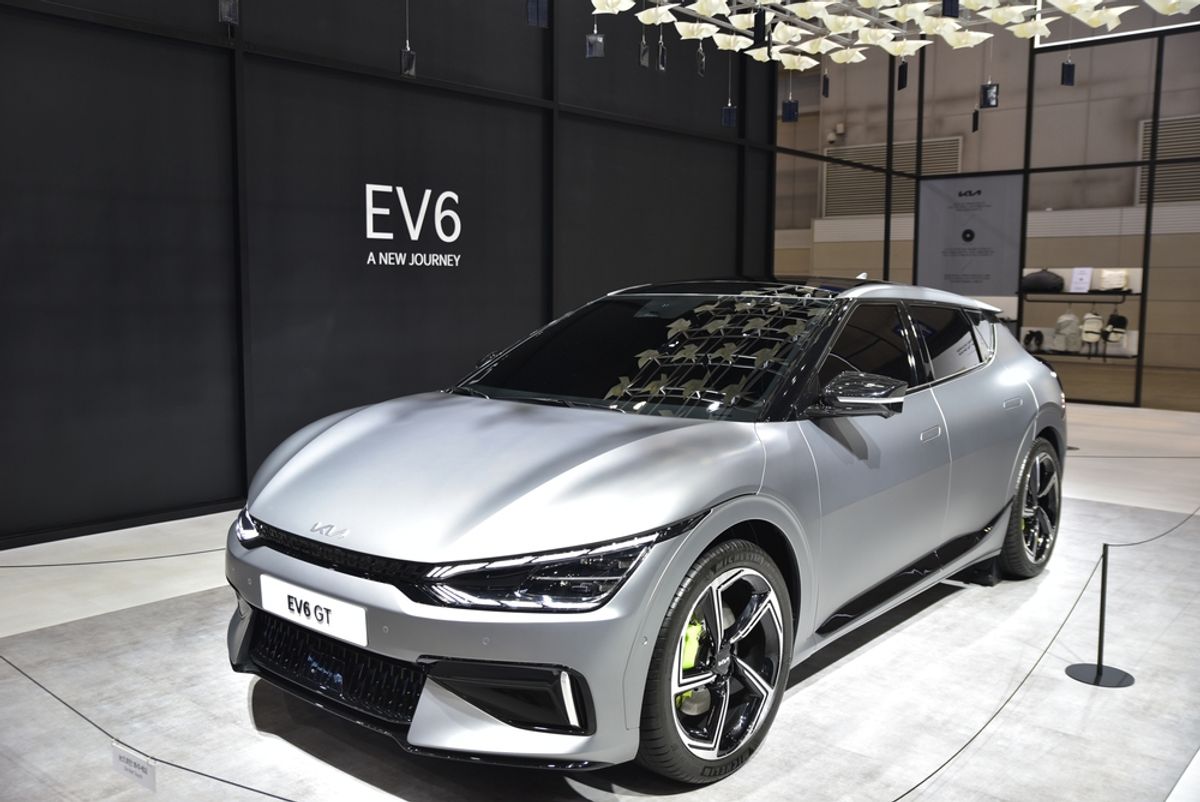 Like its Hyundai counterpart, the EV6 from KIA shows that a South Korean car company with a reputation for creating economy cars can produce a solid electric crossover SUV in the $40,000 range. It starts with over 300 miles of range per charge, and a 20-minute charge extends you another 218 miles. It also is quicker than you might expect, getting from 0 to 60 in 4.6 seconds.

It’s also housing 320 horsepower, and perhaps deceptively for its looks, can tow up to 2300 pounds if you need it to. Its appeal extends to an interior that can fit five adults comfortably and a number of features that help drivers maintain safety and alertness while also lending an assist through its “hands-on semi-autonomous driving technology.” 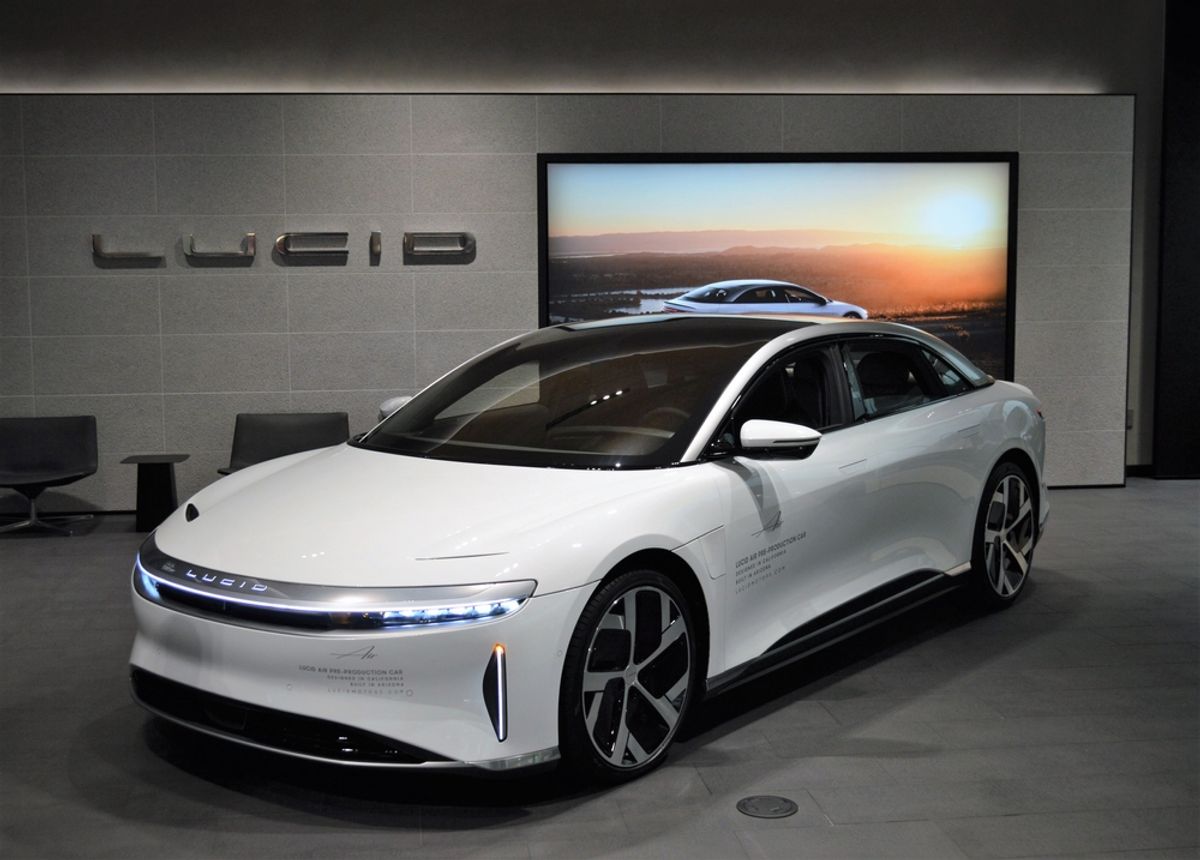 Winning 2022’s edition of the coveted Motor Trend Car of the Year award, the Lucid Air stretched beyond the known capabilities of an electric car. At the maximum end of the spectrum, you can get the Dream Edition and either go the performance route and max out at 1,111 horsepower and get from 0 to 60 in just 2.5 seconds — or you can “settle” for 933 horsepower to get a car that can go 520 miles on a single charge. Plus, you can get enough power from a 20-minute charge to move 300 more miles down the road.

The Air also got impeccable design, and it’s roomy where it counts but still boasts aerodynamic design. That comes with a price tag, though: specifically, $169,000. The base model, though, known as the Air Pure, sells for under $80,000 and provides more than 400 horsepower and 406 miles of range, with three years of complimentary charging thrown in. 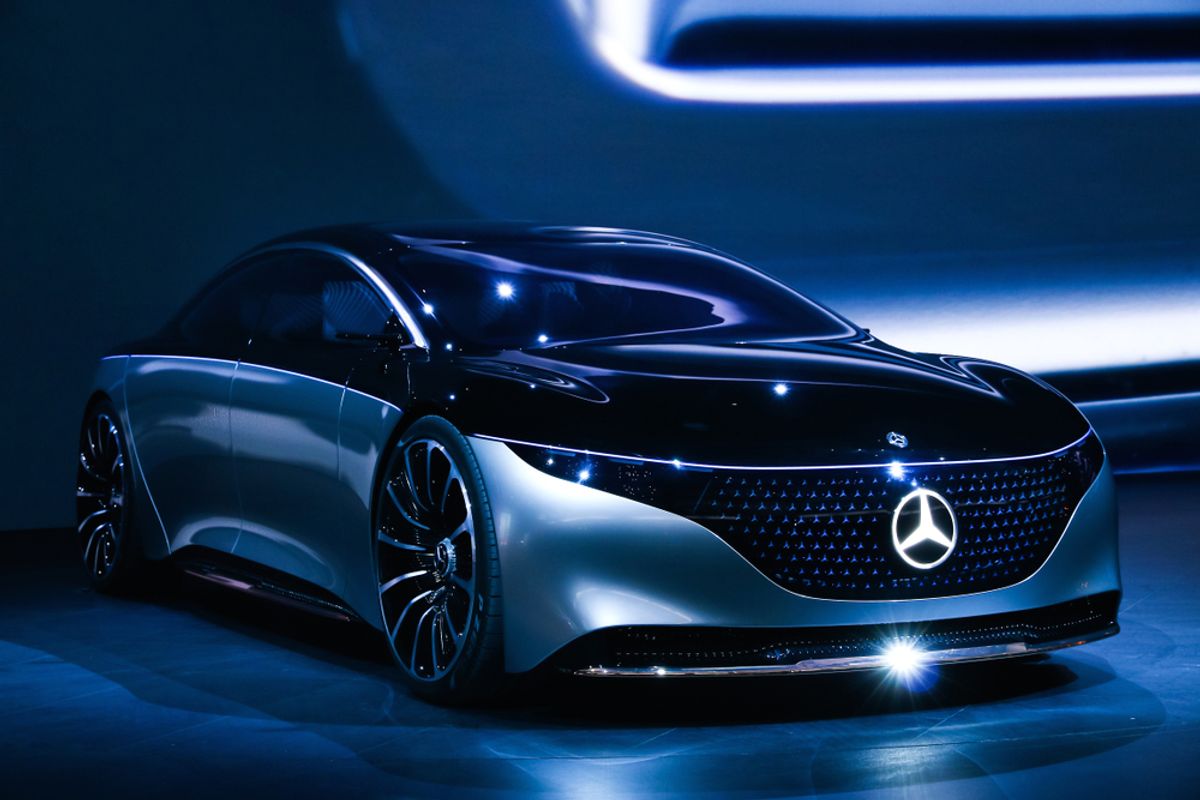 The luxury German car company has entered the electric vehicle arena with a sleek sedan that looks like it’s from the future, with its aerodynamic exterior and a door-to-door-width hyper screen stretching across the full interior dash. The EQS looks expensive, and it most definitely is, starting at an eyebrow-raising $102,000 for the 450+ (giving you 329 horsepower and a 5.9 second 0 to 60 time, and bumping up to nearly $120,000 for the higher-performance 580 4Matic Sedan, which cuts the acceleration time to 4.1 seconds and brings horsepower up to 516. Both versions have a range right around 350 miles, putting it in a similar company with its competitors, but fancier. 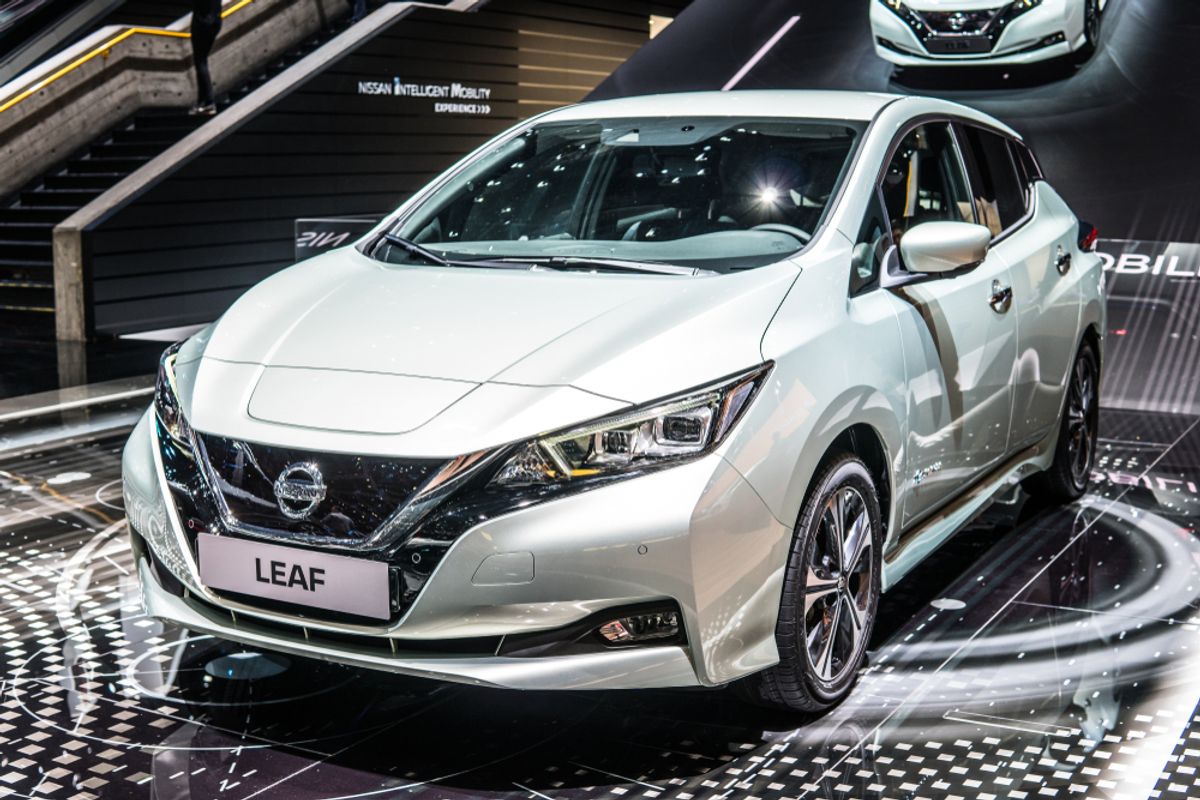 The utilitarian Leaf is one of the more established electric car brands and starting at $27,400, it’s one of the most affordable, though the 226-mile range makes it a little less appealing for longer trips than some other electric car options — and that’s if you go with the 62 kWh battery option, which brings 216 horsepower and the longer-range that comes with it. But for a city or suburb-dwelling commuter, there’s a lot to like about the Leaf, including a complete package of driver safety and driver-assist technologies, and a roomy interior with great cargo space for its size. 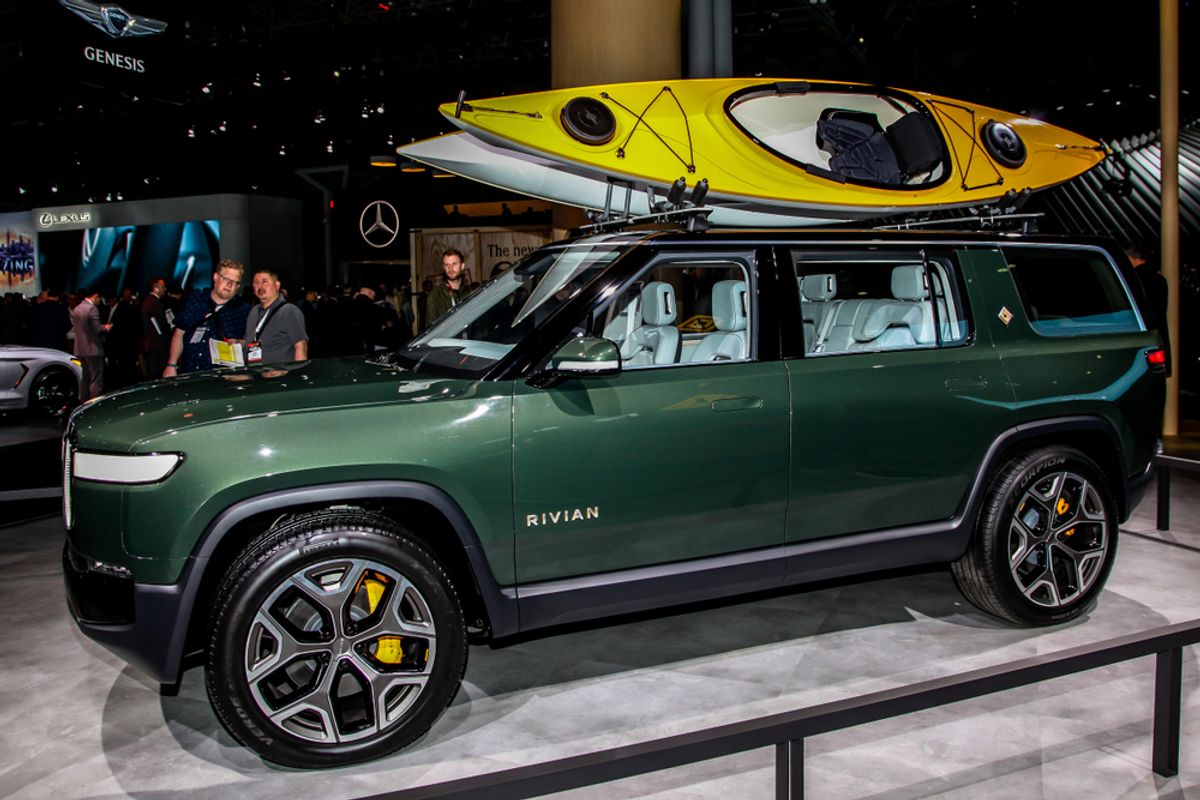 Imagine a Land Rover-like SUV that can go 0 to 60 in three seconds with quad-motor technology, along with a battery that can do it from 130 degrees to -25 degrees Fahrenheit, providing a range of over 300 miles, and able to tow up to 7,700 pounds. That’s the promise of the Rivian R1S, priced from $70,000, and looking to take a significant percentage of the electric car market after its relatively recent 2009 launch. Rivian’s also creating its own network of chargers, initially capable of extending a trip 140 miles in just 20 minutes.

Passengers can either focus on their screens with the SUV’s WiFi capabilities or unplug and gaze out of the large glass roof that helps define the car. 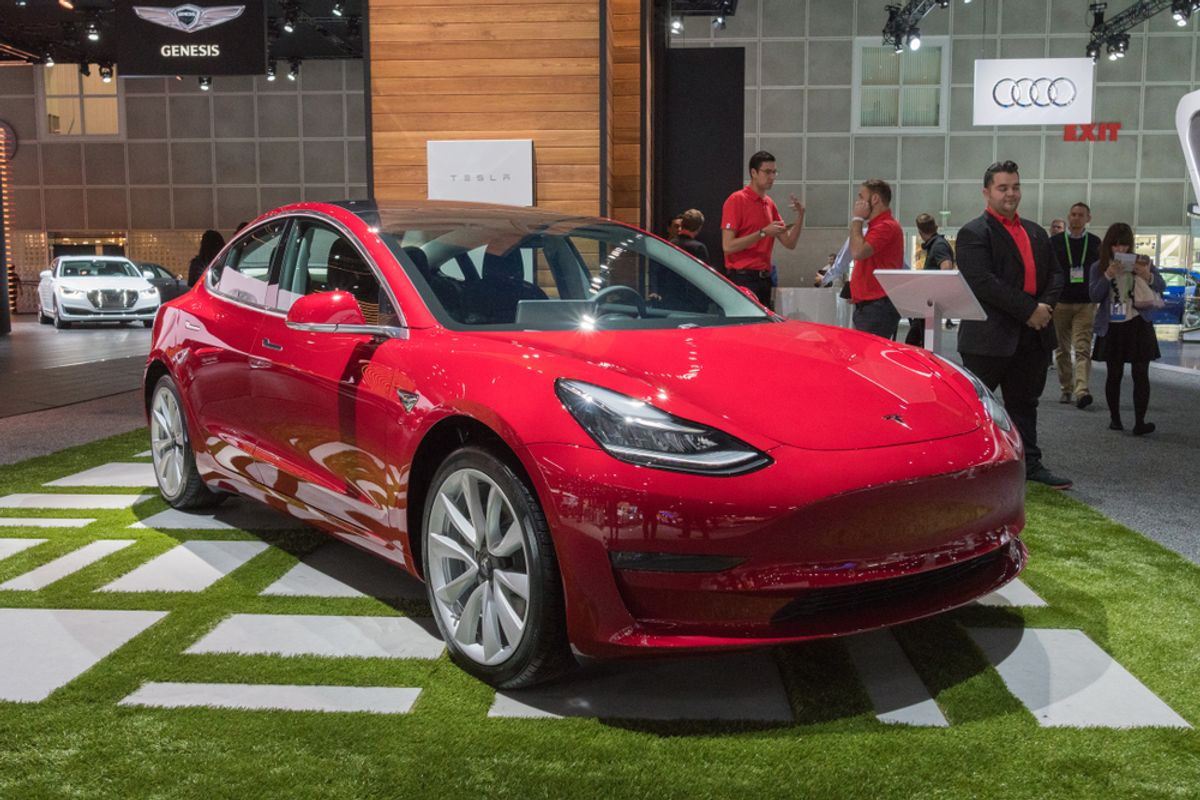 If you’re really inspired to drag race, the Performance edition lets you get off the blocks at 3.1 seconds. If you’re willing to spend an extra $12,000, you can really get into the future with Tesla’s self-driving capability, which won’t quite make the vehicle fully autonomous, but will do a lot of the driving and parking work for you. 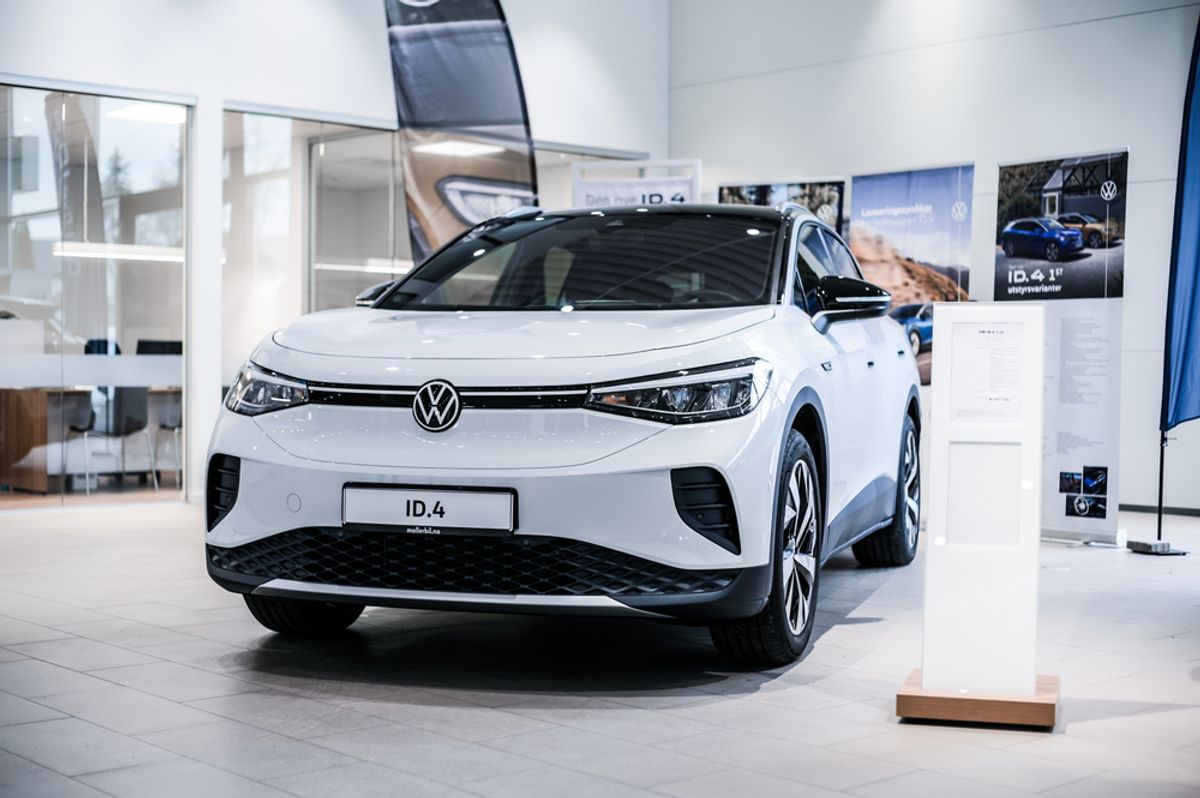 The in-demand ID.4 starts at about $40,000, though many of the people who want them are currently having to put in reservations for their delivery — they’re just that popular. Features like instant torque and driver assistance technologies provide a winning balance of safety and performance, though the Pro S is what you want over the Pro if leatherette seats and a panoramic fixed glass roof speak to you. You can also opt for all-wheel drive, which will cost close to an additional $4,000 — but will bring your horsepower up from 201 to 295, and get you a faster 0 to 60 speed to boot.

No matter which direction you go, the ID.4 brings one of the roomiest interiors and most fun driving experiences in its class. 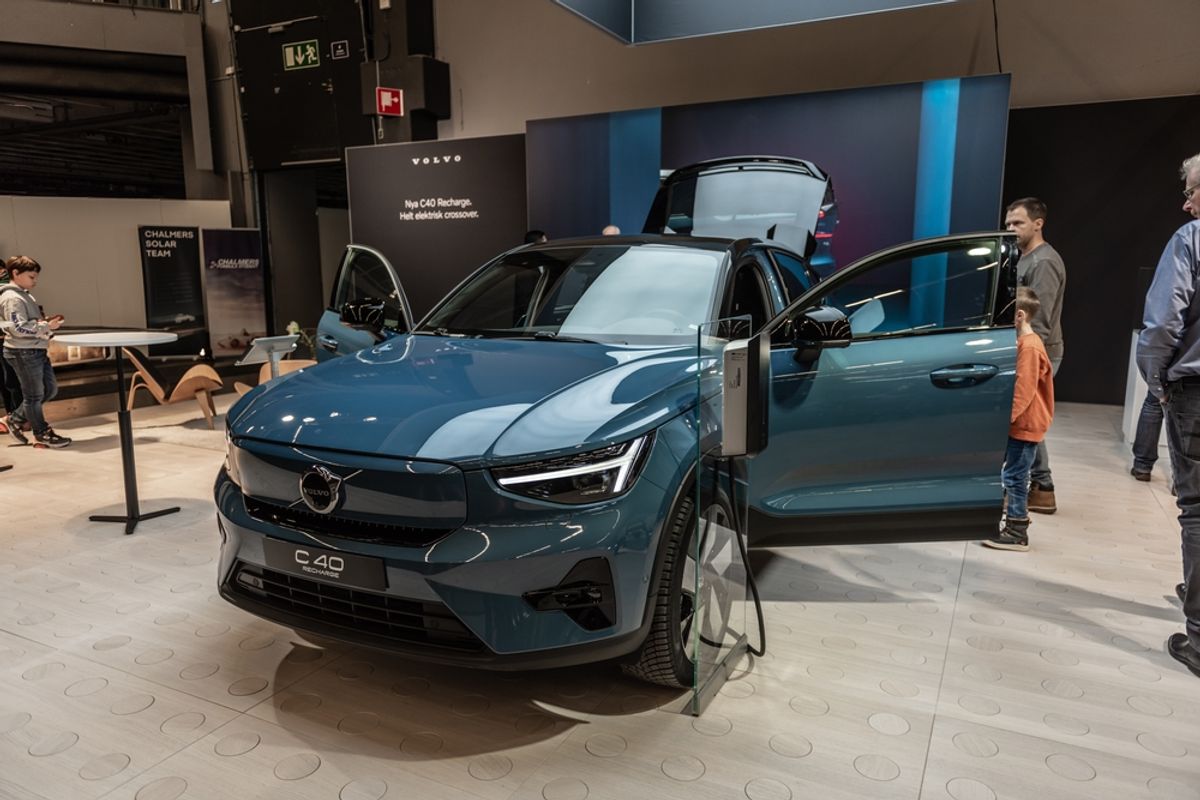 Volvo’s pure electric vehicle — a cousin of its XC40 plug-in model — has some features that distinguish it from other entrants in the luxury electric vehicle realm, boasting a 100% leather-free interior it touts as being “crafted with respect,” pixel lighting technology, and Google integration (including Google Maps, Google Assistant and Google Play) to help drivers navigate and be entertained. Volvo aims to be leather-free and all-electric by 2030, and the C40 is paving the way to those ambitious goals with a car that can get from 0 to 60 in 4.7 seconds and can go more than 200 miles on a single charge. It does run from around $59,000, though, placing it in the higher-priced tier of electric cars.