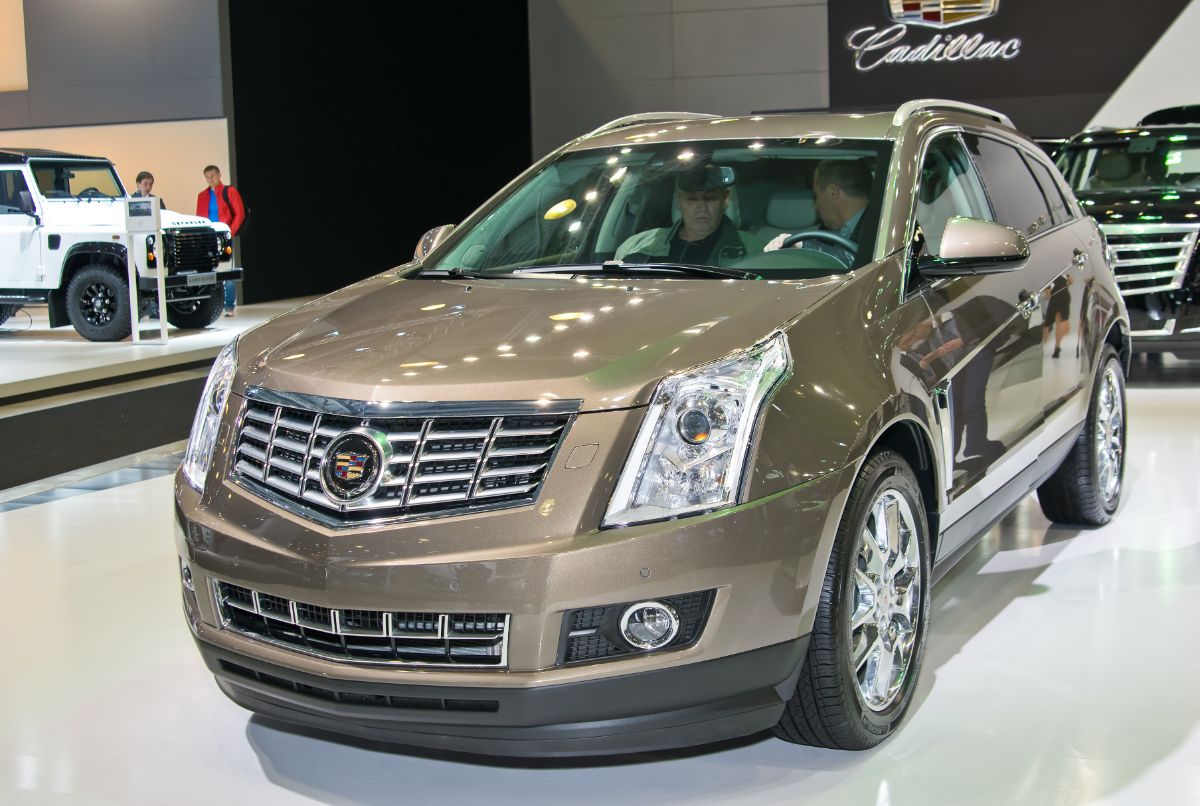 At its advent, it was available with a 4.6 liter Northstar V8. By its second model year in 2005, its towing capacity had reached 4250 pounds. For an automobile made in the early 2000s, that was impressive.

In 2010, GM completely changed the platform of the SRX from the ground up and axed the Northstar V8, turned it into a front-wheel-drive car with an all-wheel-drive option, and dropped in a turbocharged 2.8 liter V6.

The stylistic change doubled their sales and kept the SRX on the market for five more years. In its last model year, 2016, the standard power was a Flex-fuel (gas/ethanol) 3.6 liter V6 that produced 308 horsepower at 265-pound feet of torque.

Mated to a six-speed automatic, it could run from 0-60 mph in 7.3 seconds, and mileage is 20 city/29 highway/23 combined miles per gallon. Towing capacity for a 2016 SRX is 2500 pounds. The competition could meet or match that ability, often at a lower price.

I liked the first rendition of the Cadillac SRX, and I would still consider one with low mileage and Northstar power. However, the later models began to look like everything else.

Even though the SRX is a Caddie, Lexus, Infiniti, Acura, and even GMC make SUVs as luxurious and have more seats than the five offered in the SRX. The MSRP of a 2016 Cadillac SRX was $38,000 when new.

A few cars in this list are standouts, and I’ve had a thing for Porsche Cayenne’s since I saw the first one, read the specs, and fell in love. I also appreciated the carved lines of the original Cadillac SRX.

The fact a Northstar V8 powered it was merely icing on that cake. The Land Rover Evoque is another such car. I saw its lines before I knew what it was and wondered what it was. Such is the way of cars, especially for the enthusiast. 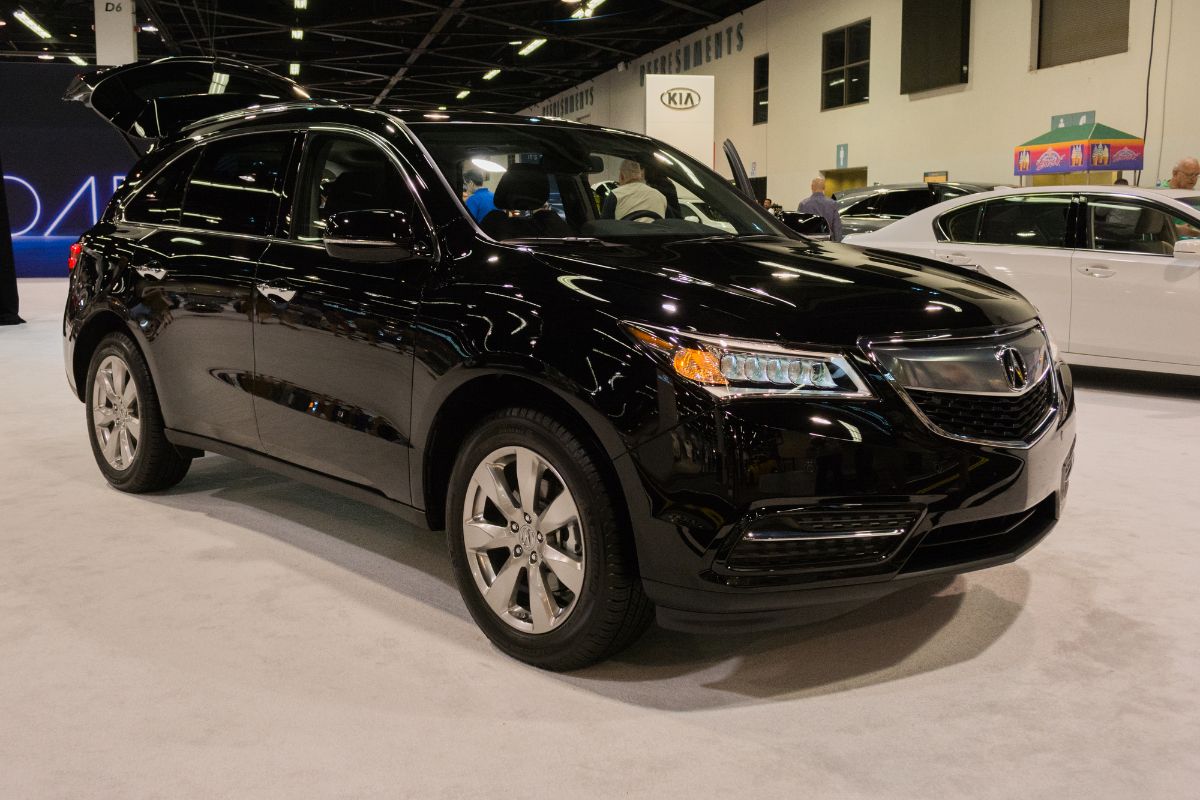 Almost identical in size, the 2016 Acura MDX was stiff competition for the Cadillac SRX of that year. However, the Acura MDX ticked off all the boxes to build a mid-size SUV that could hold up against the competition, especially the SRX.

It was a challenging model for anyone to beat with seating for seven, a nine-speed transmission, better gas mileage than others, and available all-wheel drive.

Powered by a gas-fueled 3.5 liter V6 that produces 290 horsepower at 267-pound feet of torque, the MDX has slightly less power than the SRX. 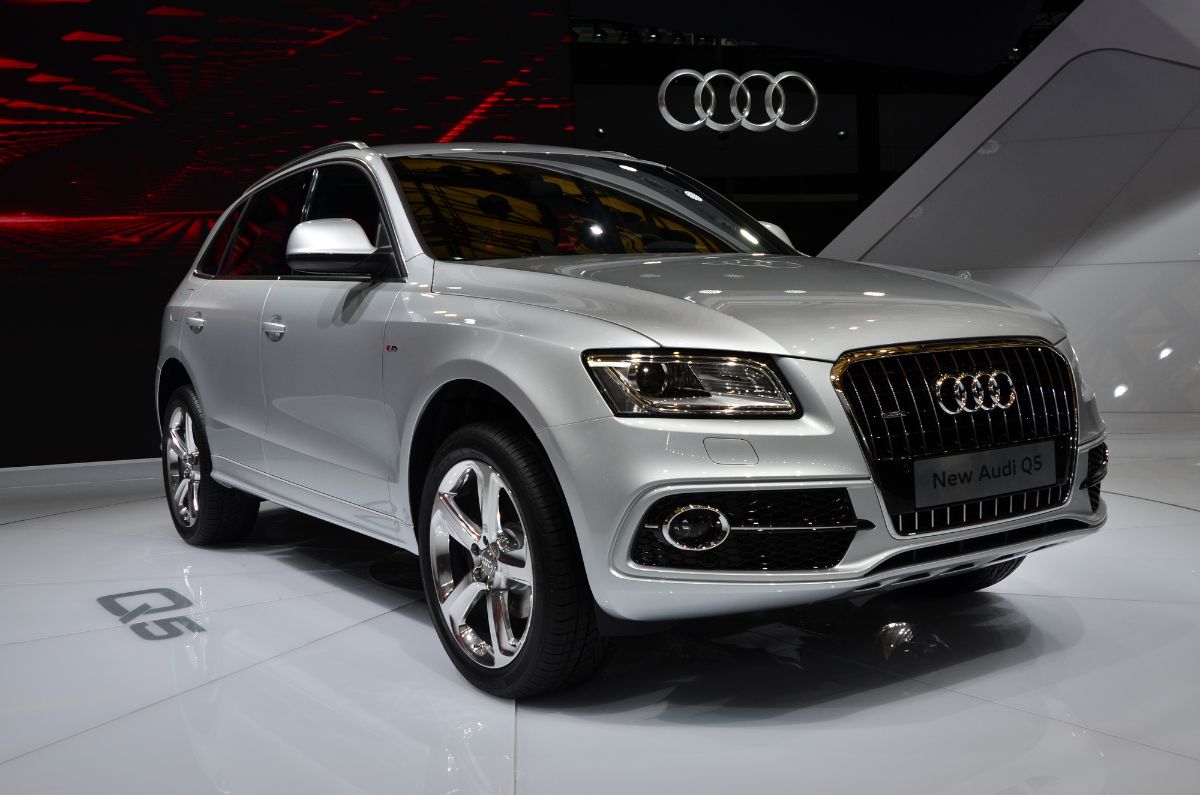 However, what you are missing at that price is a six-cylinder gas power plant, which the SRX supplied as standard but was an option on the Q5.

The standard turbocharged 2.0 liter, inline four-cylinder engine of the base 2016 Audi Q5 produces 220 horsepower and 258-pound feet of torque, well below the SRXs power.

Mileage is no better either, and the 2016 Q5 mileage is 20 city/ 28 highway miles per gallon. The 0-60 mile per hour time for this German SUV is a flat seven seconds. Like the SRX, the Q5 was only available with seating for five.

Surprisingly, the towing capacity of the Audi Q5 comes in at 4400 pounds, which is almost 1000 pounds over the Cadillac. 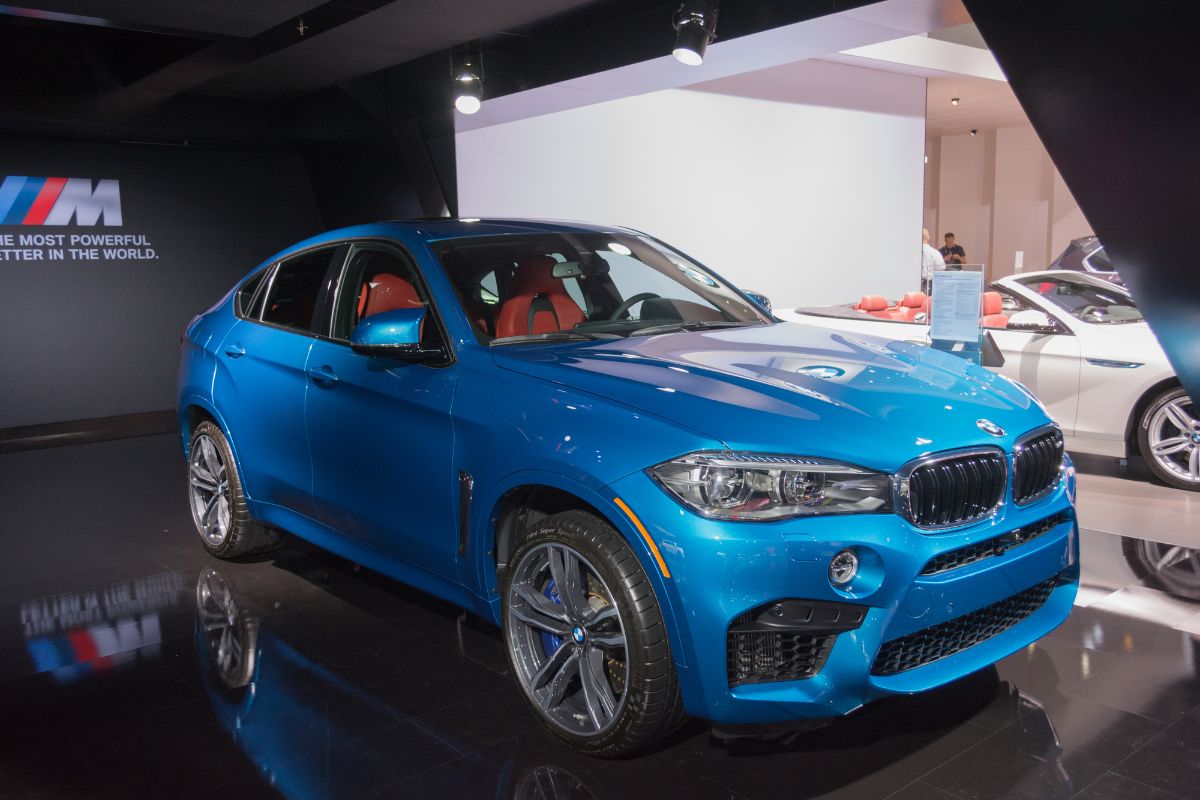 Almost equal in size, Cadillac and BMW make SUVs in different ways. While Cadillac has experimented with this powertrain, BMW has stuck to the tried and true.

Even in today’s X5s, BMW uses their venerable 3.0 liter, inline-six, petrol power plant in the X5. Developing 300 horsepower and 300-pound feet of torque in the 2016 variant, the power output is close to the Caddies.

Seating five, it can tow an impressive 5952 pounds, which is almost what my V6 Chevy Silverado can tow, using less fuel and in more comfort, so I’m impressed. 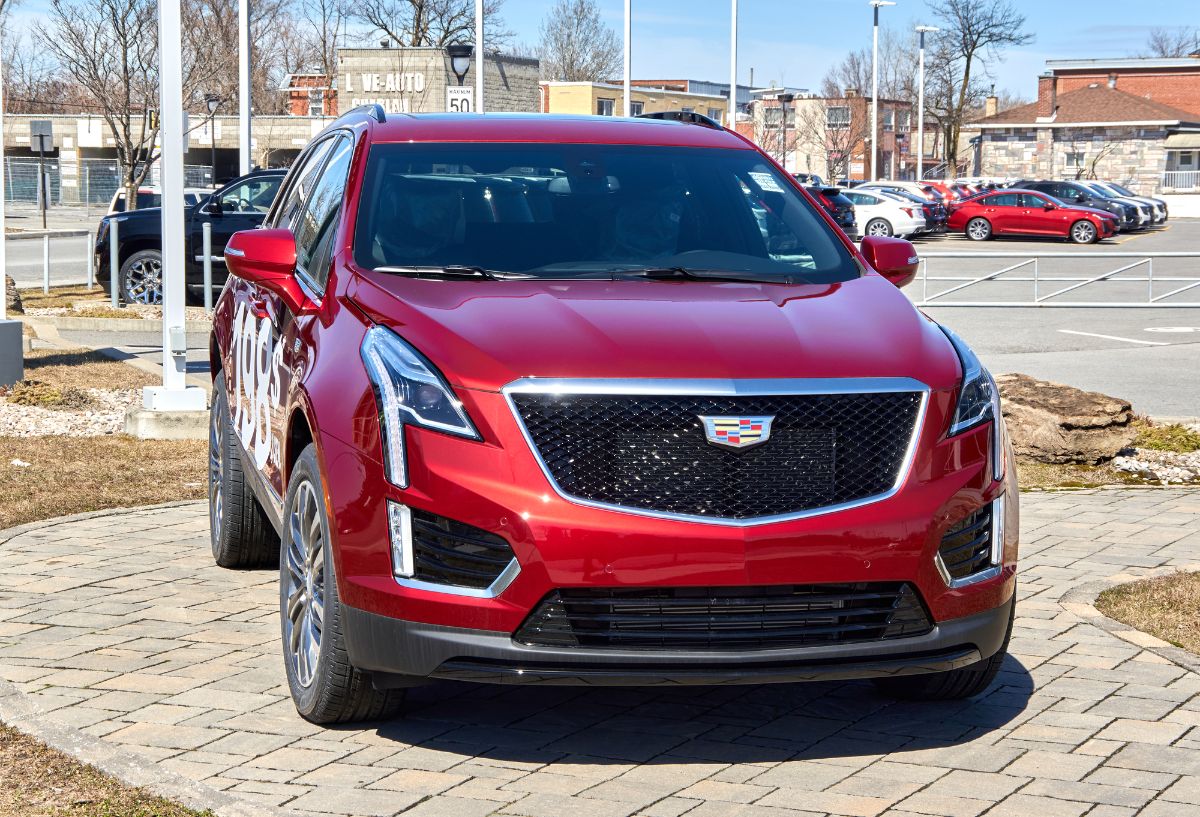 In 2017, the Cadillac XT5 moved in to replace the SRX. A little shorter, narrower, and lighter than the SRX, the XT5 was given a slightly more powerful engine than the SRX.

Cadillac accomplished that by providing the 3.6 liter V6 of the SRX, a tweak that squeezed out a few more horsepower from the 3.6 liters of V6 in the 2017 Cadillac XT5.

Fueled with petrol, it develops 310 horsepower and 270 pound-feet of torque, which will take it from zero to 60 in 6.5 seconds.

The 2017 Cadillac connects to the road via an eight-speed transmission instead of the six of the SRX. The towing capacity of the XT5 comes in at 3500 pounds, a noticeable gain over the SRX.

Mileage is almost the same at 19 city/ 27 highway miles per gallon. The only seating available in the 2017 Cadillac XT5 is for five. 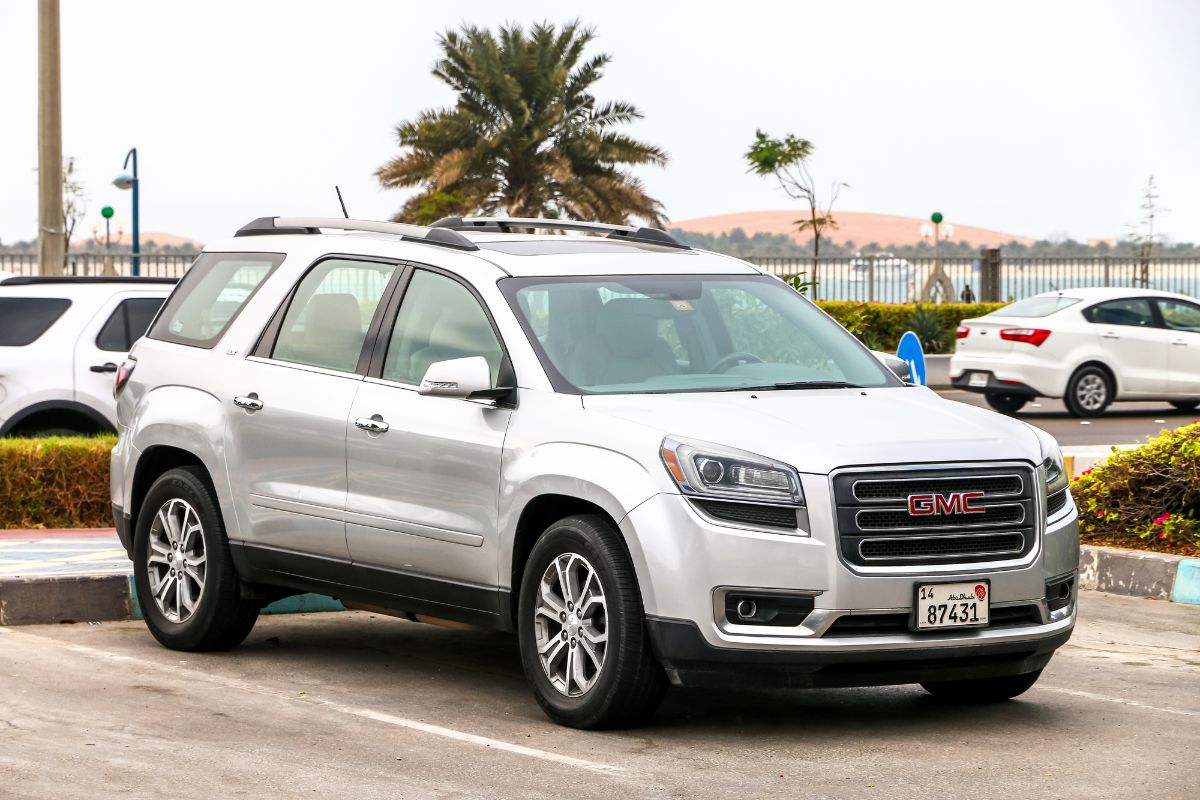 Although there are definite style differences between the GMC Acadia and the Cadillac SRX in 2016, they are both SUVs. Like Cadillac, GMC has always produced a more luxurious vehicle than its siblings have.

However, what is evident from the start of this comparison is, the Acadia has seating for seven with second-row captain’s seats and eight with a second-row bench seat.

The kicker is the price, and Acadia’s MSRP for the base model came at a little less than $31,000.

The engine of the GMC Acadia is almost identical to the Cadillac SRX. It is a 3.6 liter V6 that uses petrol and produces 281 horsepower and 266-pound feet of torque.

See also  What is the Typical Profit Margin on Crossover Vehicles?

The granddaddy of SUVs, the 2016 Jeep Grand Cherokee, was priced considerably lower with an MSRP of $30,000 than the Cadillac SRX. The styling has kept up with the times, and the big Jeep SUV’s comfort level is sedan-like.

The base engine for the Grand Cherokee is a 3.6-liter gas-fueled V6 that produces 290 horsepower and 260 pound-feet of torque.

The mileage of the Grand Cherokee is 18 city/25 highway/ and 21 combined miles per gallon. Towing capacity when equipped with the V6 is 3500 pounds.

However, a Jeep Grand Cherokee can be equipped with a V8 to increase that capacity to 7200 pounds! 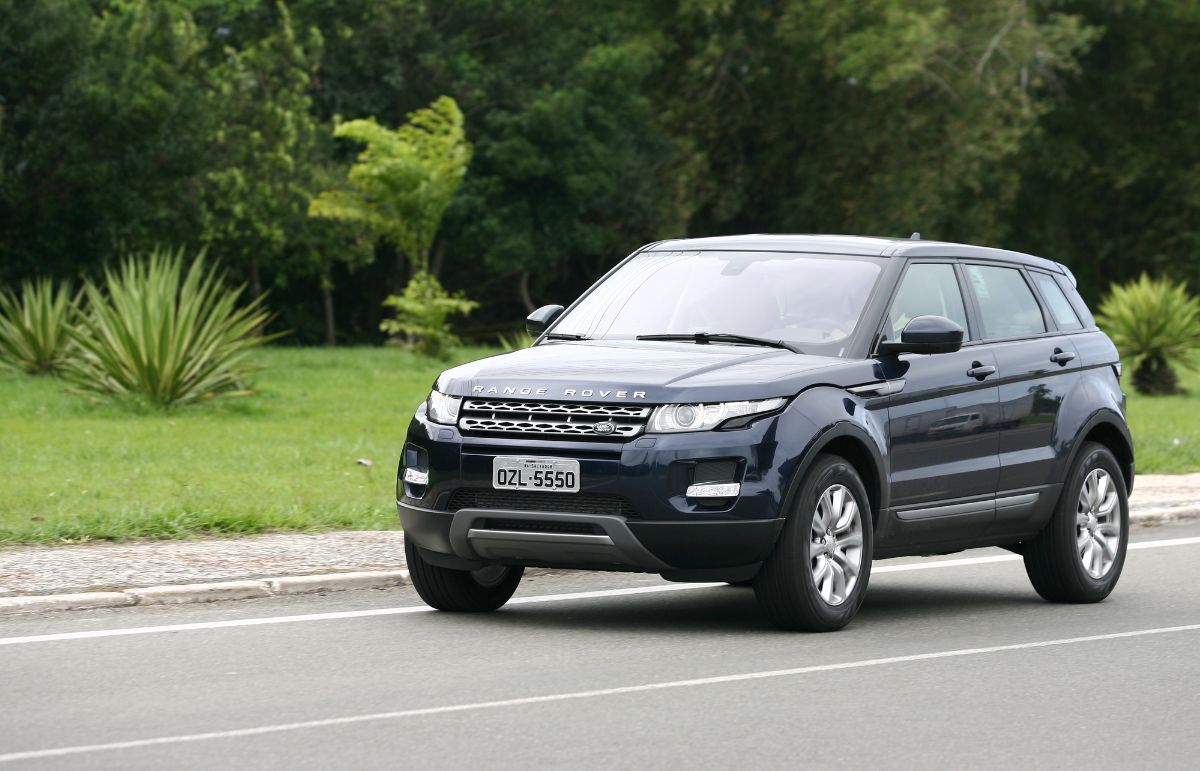 The lines of the Land Rover Evoque caught my eye from a quarter-mile away. I wasn’t sure what it was, but I knew I already liked it. A few things stand out immediately when put up against the Cadillac SRX of the same year.

The turbocharged 2.0-liter inline four-cylinder of the Evoque produces 240 horsepower and 250 pound-feet of torque and will propel it from zero to 60 miles per hour in 7.1 seconds. That’s not the fastest time in the group, but not too bad.

The towing capacity of the Evoque is 3500 pounds, and standard seating for the car is for five, but they won’t be cramped. When new, the Evoque had a base price of $41,500, which was several thousand dollars above the base price of the SRX.

See also  List of All Electric Vehicles (EVs) on the Market (Make, Model and Base Price) 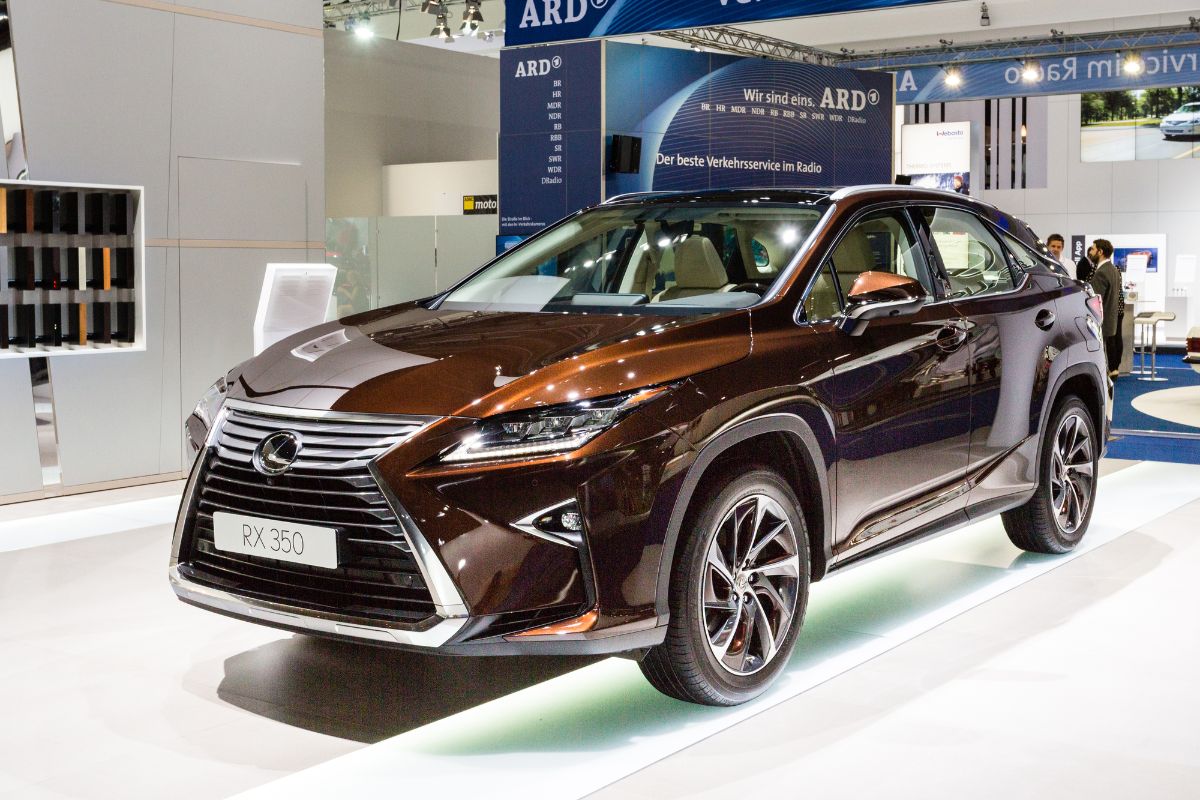 Closely matched in power and size, the Lexus delivers the luxury that Cadillac buyers are accustomed to having in their automobiles.

Powered by a gas 3.6-liter V6 producing 295 horsepower and 267-pound feet of torque, the RX350 can run from zero to 60 in 6.8 seconds. Seating in the Lexus has seating for only five, but it is very luxurious seating.

The Lexus RX 350 has a towing capacity of 3500 pounds, higher than the SRX. A thousand pounds of towing is a big deal when choosing travel trailers, towing boats, or pulling a horse trailer.

The closest commonality between the two vehicles is price. The Lexus RX 350 was priced at $42,000 when new. 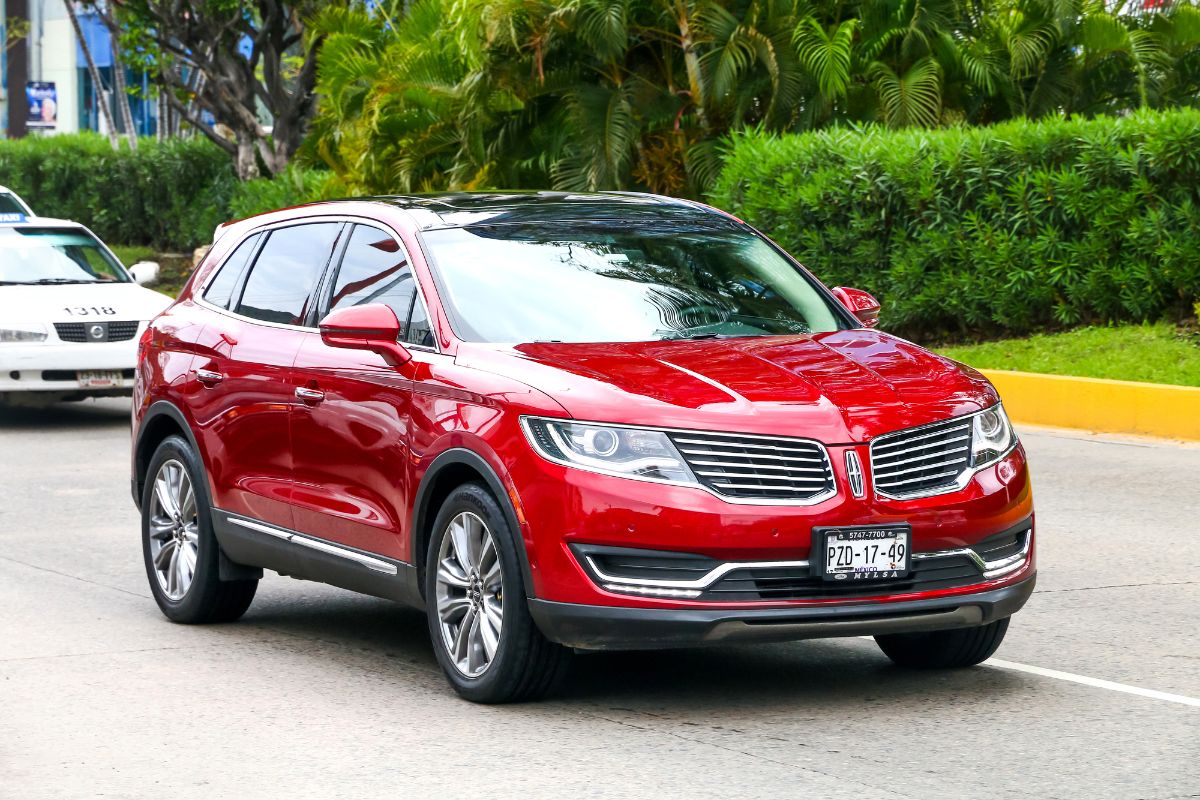 Apples to apples, the Lincoln MKX is the heads-up competitor of the Cadillac SRX. Both have roots in Detroit, with companies making cars for over 100 years.

Seating only five like the SRX, the MKX does so in the same luxurious style as Cadillac. The towing capacity of the Lincoln MKX is 3500 pounds, which is in line with many of the other vehicles listed here. 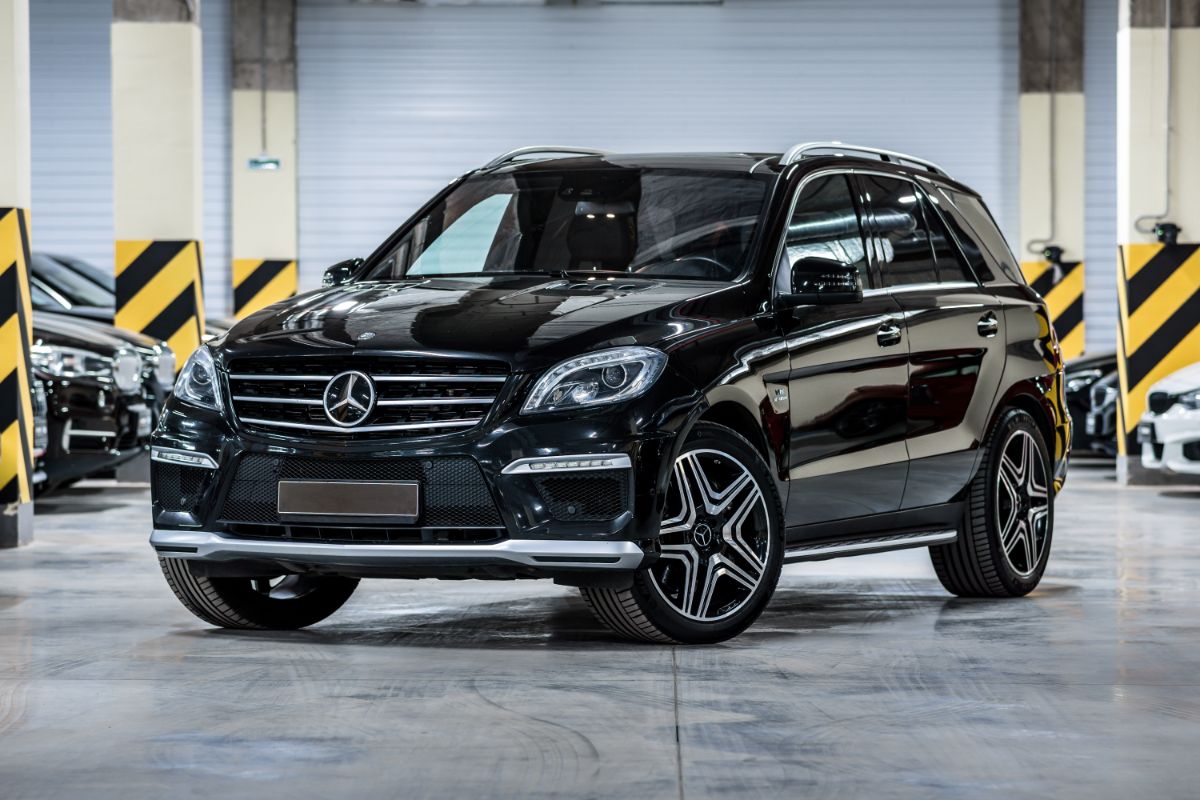 The comparison here is to a 2015 Mercedes, the vehicle most like the SRX, in their illustrious lineup. It has a gas-fueled 3.5 liter V6 that produces 302 horsepower and 273-pound feet of torque.

Besides being 2015, the big difference is that it is rear-wheel drive, which gives it a maximum towing capacity of 6600 pounds. However, not all that weight capacity increases seating capacity, and it too will only seat five.

The price variation of these two vehicles is quite significant, and the Mercedes is listed at $48,000 when new. That is $10,000 more than the SRX, but you get the added towing capacity if that is your goal.

Gas mileage is also close between the two, and the Mercedes returns 18 city / and 24 miles per gallon highway. 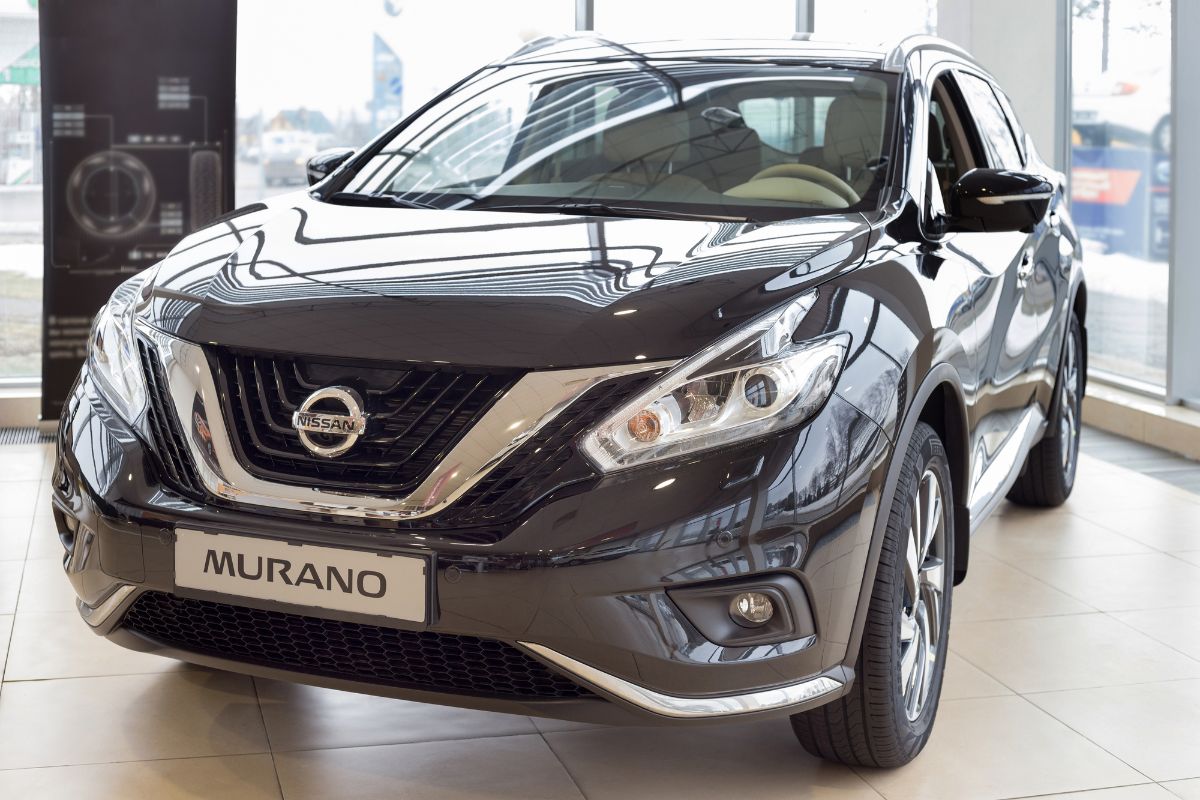 The MSRP of the 2016 Nissan Murano was about $30,000, putting its price well below the Cadillac SRX when new.

Seating, like the SRX, is for five and has the lowest towing rate, at 1499 pounds, of any vehicle on this list. That’s fine because Nissan makes two pickup trucks, the Frontier and the Titan.

The gas mileage of the Murano is in keeping with the other SUVs here, and it gets 21 city/28 highway/ and 24 combined miles per gallon. 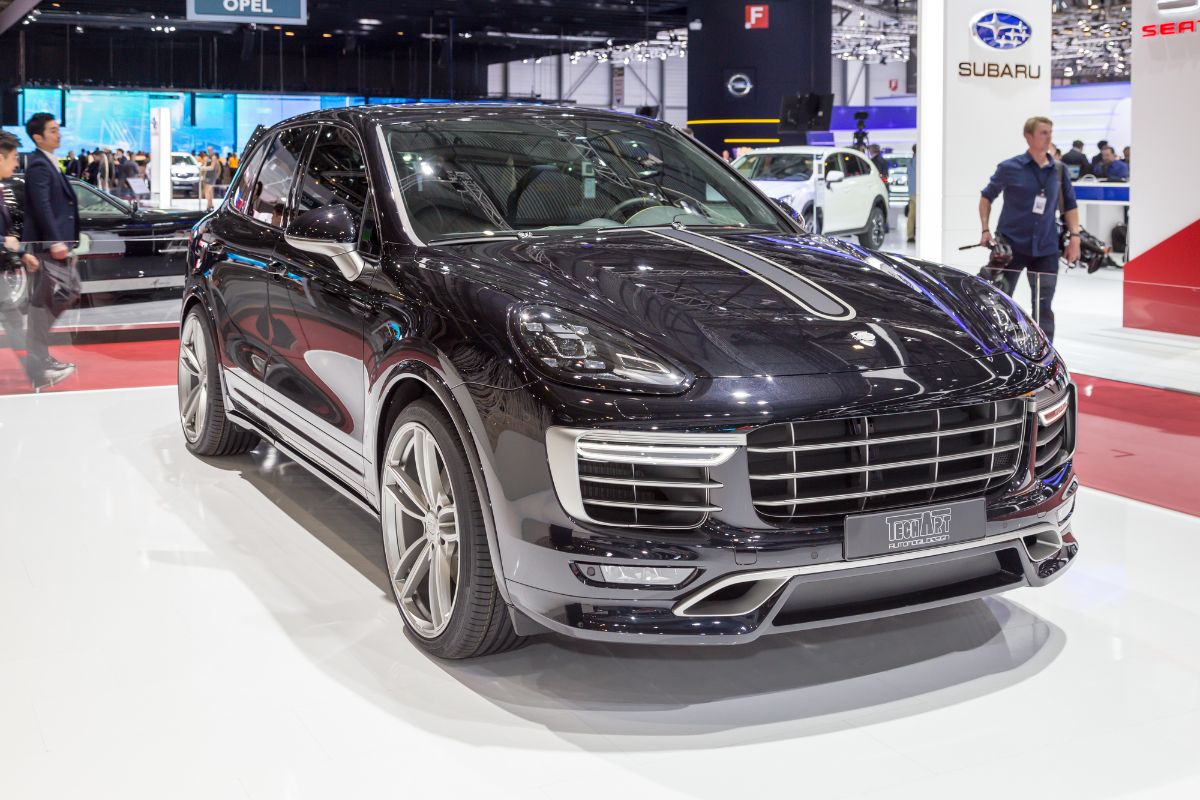 A Porsche is a Porsche even when it’s an SUV, and the Cayenne has proven itself to be as reliable and nimble of foot as the cars that came before. In my opinion, the Cayenne has a rather quirky look and may be due to the very Porsche-esque nose.

However, the power for the Cayenne doesn’t come from the legendary boxer engine but from a gas-fired 4.8 liter, 570 horsepower V8 with 590-pound feet of torque when in S livery.

Dimension-wise, the Cayenne is almost identical in size to the Cadillac SRX; however, when Porsche shoehorned a V8 under its nose, the game changed. The S model can go from a dead stop to 60 in 4.9 seconds.

Even the lesser model can reach that mark in 5.9 seconds. Fuel mileage for the Cayenne is 14 city and 21 miles per gallon highway, which isn’t bad for a rocket that can tow 7700 pounds. 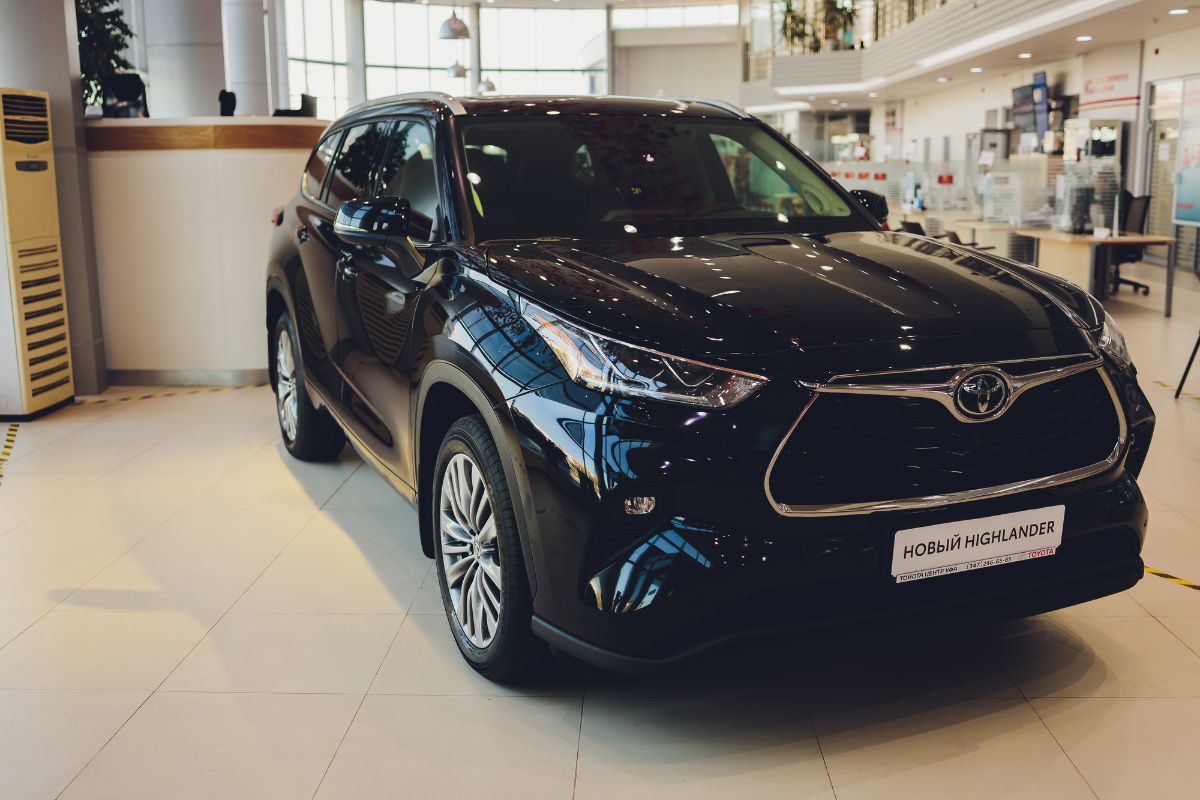 The Highlander has always had difficulty standing out from the crowd, yet it is still in production, and the SRX is not, so they must have an appeal I don’t get.

However, they are Toyotas and have the dependability and reliability that the brand is known for. Comparing the 2016 Toyota Highlander with the SRX reveals the Highlander has more cargo space due to its boxy shape.

Although that’s less power than the SRX has, it is enough to give the Highlander what it needs to tow 5000 pounds. With seating for five, the rear cargo area supplies ample cargo space for camping gear or other items.

The Highlander gets 19 city/ 25 highway and 21 combined miles per gallon. Although not as sleek in appearance as the Cadillac SRX, they are more utilitarian and have more cargo space.