My Top Picks for Vehicles Similar to the Jaguar F-Type

I like this car because it performs on the exotic side, has fierce V-8 power, has breathtaking exhaust noise, and is quite attractive. It has a top speed of 186/mph and moves from 0-60 in 3.5 seconds.

This exotic vehicle comes in at a decent starting price of just over $71,000 for coupe models and convertibles at $74,500. It has a gas mileage offering 16 mpg through the city and 24 mpg when you hit the highway.

The 5.0L Intercooled Supercharger V-8 engine takes premium unleaded fuel. It seats only two people and similarly has only two doors. It’s also a convertible offering an AWD drivetrain and 8-speed transmission which is both automatic and QuickShift ZF. This powerful car has a 444@6000  SAE Net Horsepower @ RPM.

Brace yourselves for luxury, muscle, and everything you desire from a super sports car from the least expensive to mega-prices. Some great on fuel, others not so much, but all still worth even a look or a test drive.

Similarity to the Jaguar F-type: safety, comfort, and price range.

What I Like: The comfort is next level and it features a fresh standard 10.25-inch screen, plus a 12.3-inch virtual device cluster, and its C 43 is a softer aspect of force.

The twin-turbo V6 petrol engine growls and gurgles as you change through the gears when the transmission is set on the sport.

Even though the V8 C 63 S is far more ferocious, the C 43 offers a softer type of wildness that is simpler to manage while still being a lot of fun. Back roads are a fantastic place to test your C 43 Estate. Although the C 43’s 0-100km/h time is just under a second slower than the C 63 S, it’s still packing a punch. HP between 255 and 503.

Similarity to the Jaguar F-type: Handles the road nicely, is elegant, and has great acceleration.

What I Like: Supercar fantasies come true with the 2020 Ferrari 488 Pista. This self-assured Italian jumps out in a lineup thanks to its broad shoulders, protruding fenders, as well as the beautiful arch of the roof. A two-door supercar usually doesn’t have as much room in the cabin as this one has.

If you’re looking for a Ferrari-built machine, the 488 delivers all the oomph and poise you’d expect. When it comes to cornering and straight-line speed, nothing beats this car.

There’s a twin-turbocharged 3.9L V8 that produces 711 hp as well as 567lb-ft of torque beneath its hood. Power is routed to the vehicle’s rear wheels via a seven-speed automatic transmission. The 488 is designed to satisfy your desire for speed.

Trim levels are: Coupe and Spyder

What I Like: No force, just pure gurgling, and it sounds fantastic! The decor is elegant, but it’s also kept to a minimum. It’s a fun car that you can take out on the road every day.

The R8 sports car, Audi’s top model, has a 602-hp V-10 engine to the rear of the snug two-seat interior. Audi’s refinement might also attract those looking for a supercar to drive every day.

For 2022, the standard coupe and convertible Spyder will get a 30-horsepower bump. As of this writing, the V-10 engine is producing 562 horsepower and 406 lb-ft of torque. The Dynamic and Sports Exhaust packages are now available for both body types. Both of these go without saying. Additionally, it has Nappa leather-trimmed seats, ceramic brakes, and distinctive 20-inch wheels. 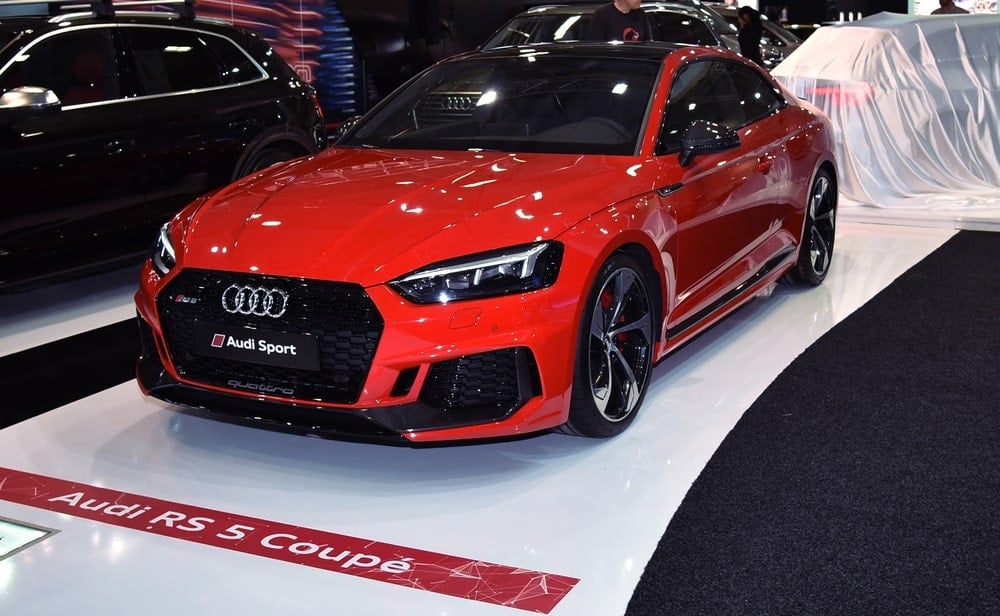 Similarity to the Jaguar F-type: Hugs the road and has great acceleration.

What I Like: The Audi RS5 is lightning-quick out of the gate, clings to the road like no other car, and is a pleasure to spend time in.

For those looking for the fastest A5 offered, look no further than the RS 5 model. If you’re looking for a car that’s more powerful than an S5, this one’s for you. In other words, it comes with a 444bhp 2.9 TFSI twin-turbo V6, Quattro all-wheel drive, as well as an eight-speed Tiptronic automatic transmission as original equipment in the Audi A4.

What I Like: Everything inside and out. The craftsmanship on the interior includes the entertainment system, and, of course, the exterior that beckons to you. One press and you shift from cruise to sport mode. More fuel-efficient than its predecessors.

A deep and distinctive sound can be heard up to 7000 rpm with the engine selection of the DB11. The car’s performance can be tweaked through the use of three different dynamic driving modes: Sport Plus, Sport, and GT.

The V12 twin-turbo, as well as the V8 engines in the DB11, create 630 and 503 horsepower, respectively, both of which deliver great performance and enhanced efficiency. It’s the most environmentally friendly and fuel-efficient DB so far.

Trim levels are: Coupe and Convertible

Similarity to Jaguar F-type: Both have two seats, similar engines, and a close to exotic look.

What I Like: While not an extraordinary car, it is certainly eye candy and enjoyable to drive.

With AWD as well as dual-automatic clutch transmission—although no manual transmission—the TT is a pleasure to drive, despite not being built for the racetrack.

In our opinion, the TTS is overpriced compared to the standard TT coupe, which offers 228 horsepower instead. With roughly 400 hp from its TTRS with five cylinders, it’s the most powerful TT on the market today. Only the 19-inch wheel bundle, which comprises high-performance summer tires, could stand as an alternative to a 2022 model year Audi. 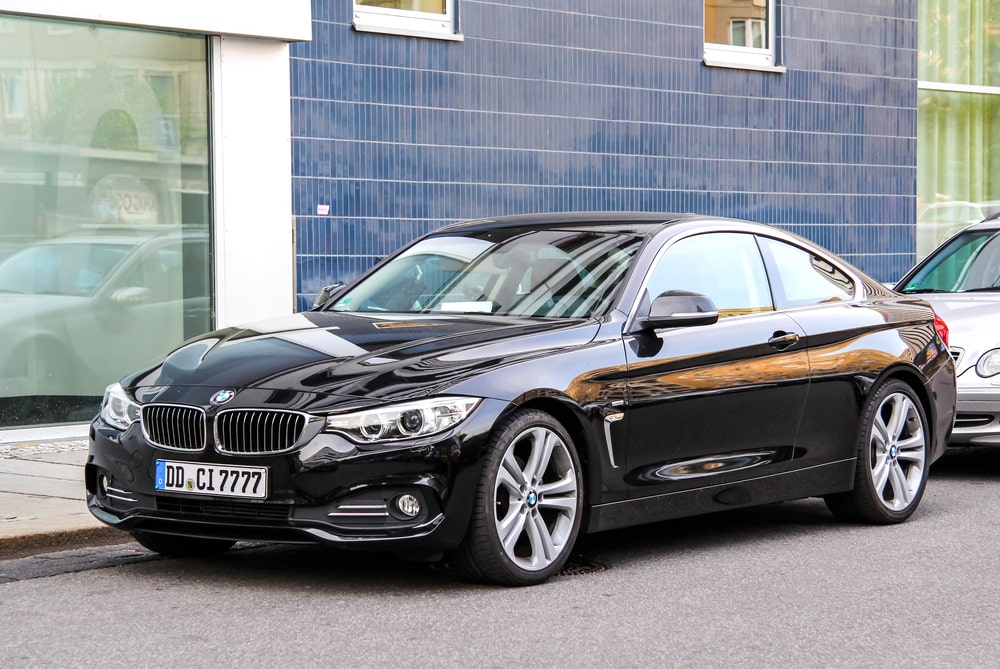 Similarity to the Jaguar F-type: Both have AWD options, fierce sound, and an attractive interior.

What I like: the turbo engine is robust and the interior is attractive. It’s also not bad for fuel. Two fresh colors: Aventurin Red and Brooklyn Grey Metallic. Infotainment system’s gesture controls.

There are a few minor tweaks to the BMW 4-series coupe along with the convertible for 2022, but nothing big. An RWD version of the M440i Coupe has been added to the lineup, as well as ambient interior lighting for all grades. In addition to the motorized lumbar support and a head-up display, the Premium package now offers gesture management for the vehicle’s infotainment system.

Turbocharged 2.0-liter four-cylinders produce 255 horsepower in BMW 430i models. Powered by a 3.0-liter turbocharged inline-six, the M440i has 382-hp thanks to a 48-volt hybrid system.

Trim levels are: Coupe and convertible

What I Like: Aerodynamically speaking, the aggressive and strong front spoiler matches perfectly with the understated rear spoiler thanks to its functional air intakes

Design elements from both a powerful and delicate nature are used in the BMW ALPINA B4 S Bi-Turbo Coupe. Its strong, muscular front end is accented by aggressive lines, while the clean and sophisticated rear end offers a contrast.

What I Like: You’ll love its display, M-Carbon bucket seats, and flexibility to change the traction and stability to suit your personal preferences. This sporty coupe represents everything of BMW M engineering’s power, agility, and thrill.

The M4 Competition has a twin-turbo 3.0-liter twin-turbo inline-six engine that produces 503 horsepower as well as 479 pound-feet of torque. Its M Driver’s package has the highest speed electronically restricted to 180 mph. Otherwise, a top speed of 155 mph is possible (250 kph).

Only an eight-speed automatic transmission is available for the Competition. When it goes on sale, the car will only be available with rear-wheel drive. The M5’s all-wheel-drive system has a rear-biased system like the M6’s.

Similarity to Jaguar F-type: The sound is a beast, has V8 engine options, and has great athletic handling.

What I Like: It’s a powerful sports car yet affordable. What it lacks in interior space and luxury, it makes up for with muscle. Hearing it rumble is just icing on the cake or maybe the entire cake.

The Camaro, like any excellent sports car, has athletic handling, but that doesn’t come at the sacrifice of comfort. And just like a genuine muscle vehicle, the Camaro has two top-level V8 engines to choose from. Comfortable front seats, as well as an easy-to-use infotainment system, are among the characteristics of this Chevrolet. 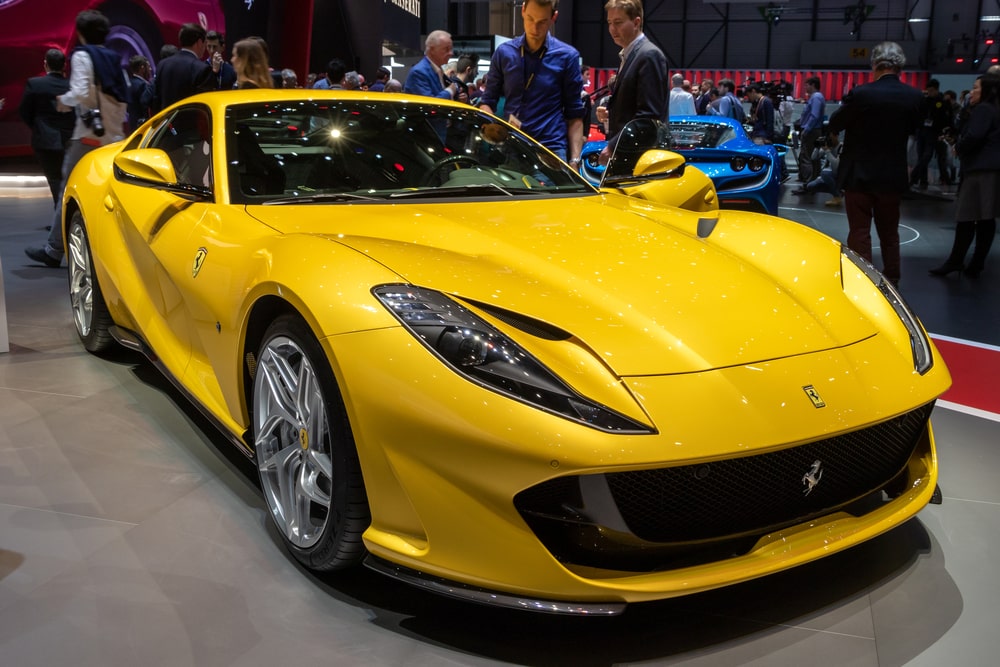 What I Like: Its performance and handling make the price worthwhile. Acceleration is rocket-fast and the cargo area is quite spacious.

It’s no shock that the Ferrari 812 Superfast is a stunning ultra GT once Ferrari incorporates the term “Superfast” in the name of a new edition. The 6.5-liter V12 in this car, which replaces the F12berlinetta’s, is among the most potent normally aspirated engines ever created.

Trim levels are: SVJ and S

Similarity to Jaguar F-type: Both two-seaters, loud and luxurious.

What I Like: It’s just unreal that a car can maintain its luxury after so many years and still pack muscles that will blow the shirt off your back. Oh, and it’s loud. Such flamboyance, but who’s complaining even though it has little space?

The 2022 Lamborghini Aventador is a hypercar with a noisy 769-hp V-12 engine and an unusual appearance. Lamborghini’s 12-cylinder engine drinks fuel like it’s in a drinking contest, in contrast to rivals like the Ferrari SF90.

Its extremely configurable interior can fit two passengers, but there’s very limited room for stowing away personal belongings. The Aventador’s shrill soundtrack can be activated with a jab of the right foot, and its unexpected agility can be experienced by rotating the tiller while behind the wheel.

Trim levels are: Coupe and Convertible with LC500 and LC500h powertrain

What I Like: You’ll have to do a double-take if you pass by one as the design is sexy and the V-8 sounds rich. The interior is lavish!

With 471 hp plus 398 pound-feet of torque, Lexus’ top-level 5.0-liter V-8 engine powers the base LC500. As beautiful to look at as it is to hear, it only works with a quick-shifting yet seamless 10-speed automatic transmission, producing spectacular internal-combustion rock ‘n’ roll.

Toyota’s 354 horsepower LC500his powered by a 3.5-liter V-6, two electric motors, a lithium-ion battery that can be recharged from an onboard charger, and a revolutionary continuously variable automatic gearbox (CVT) that simulates the function of a 10-speed automatic.

Trim levels are: Coupe and Convertible in Sport and MC

What I Like: The interior is lavish and the exterior has amazing curves. Overall, this is a high-performance car.

Every GranTurismo vehicle is equipped with a 4.7-liter V8 engine, which produces 460 horsepower and 520 nm of torque, plus it reaches a top speed of 7,500 rpm. Also, naturally aspirated, all Italian V8s are known for their famous sound.

Even though the GranTurismo features a backseat, it’s only ideal for youngsters to sit in. It’s not just the seats that are covered in leather or faux-suede: Its dashboard is also cowhide-wrapped, and the seatbacks boast stitched Maserati trident insignia. Software called Touch Control Plus operates on an 8.4-inch touchscreen in the Maserati Quattroporte.

Similarity to Jaguar F-type: Acceleration from zero to 60, beauty and seating.

What I Like: For some reason, this automobile is referred to as “entry-level,” although it’s a stunner that’s hard to tell apart from its more pricey siblings. They’ve tweaked the campers to optimize the efficiency for everyday use. Luxurious and inviting quality leather upholstery completes the look.

Even though this McLaren Sports Series supercar will be the least expensive, it will nevertheless be equipped with a big engine that can generate 540 PS as well as 540 Nm. Until 2021, McLaren’s Sports Series 540C was manufactured.