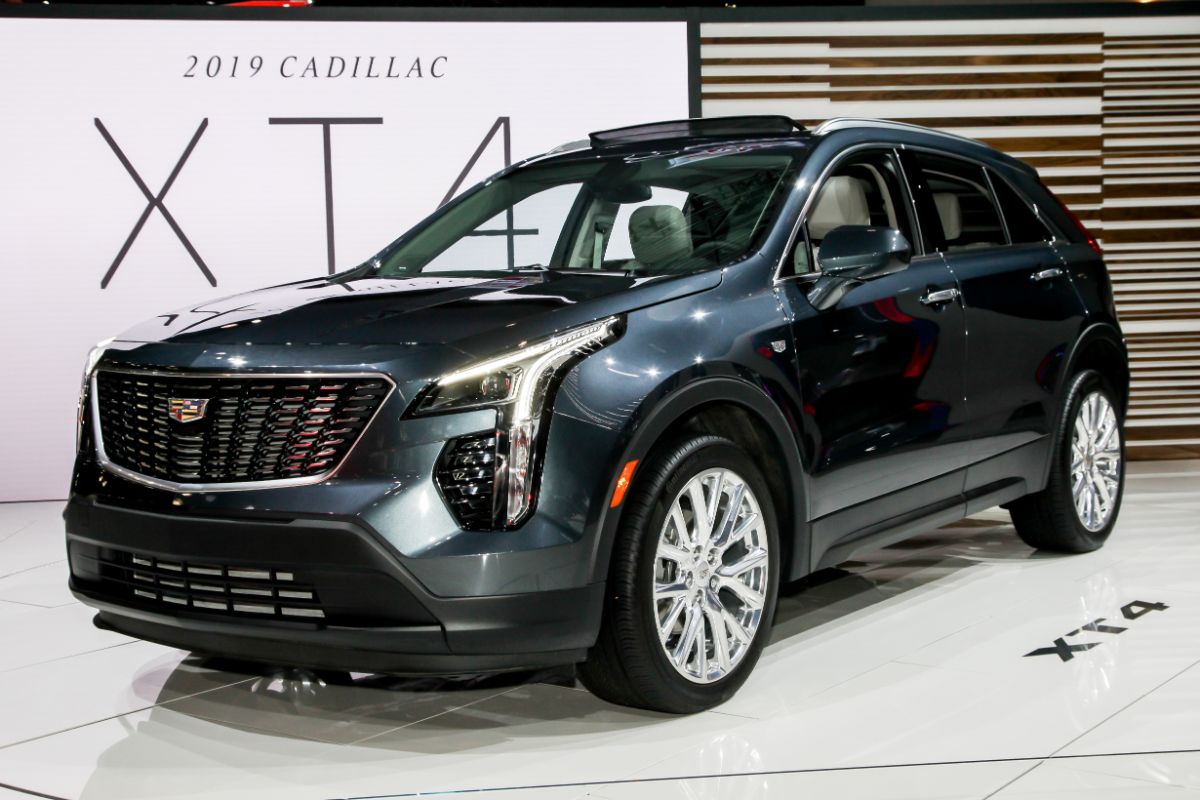 I found my favorites, the Chevrolet Traverse, Subaru Ascent, and the BMW X3. They all have the features I like and have the ability to tow more than a riding lawnmower on a trailer.

Production of the XT4 began in 2018, and this small luxury crossover is available with front-wheel drive standard and all-wheel drive as an option on all trim levels.

Power comes from a turbocharged 2.0-liter four-cylinder engine that produces 235 horsepower and 286-pound feet of torque. Power is sent to the wheels through a nine-speed automatic transmission.

This configuration will speed the Cadillac XT4 from 0-60 miles per hour in 7.8 seconds. In addition, it will return gas mileage of 24 city and 30 highway miles per gallon. The XT4 Sport has a base price of $39,395, and all-wheel drive will add another $2500 to the cost.

There is no backseat available on the XT4; however, the five seats it does have are Cadillac comfortable. As a bonus, the Cadillac XT4 has the most rear legroom in its class. The towing capacity of this luxury crossover is 2500 pounds. 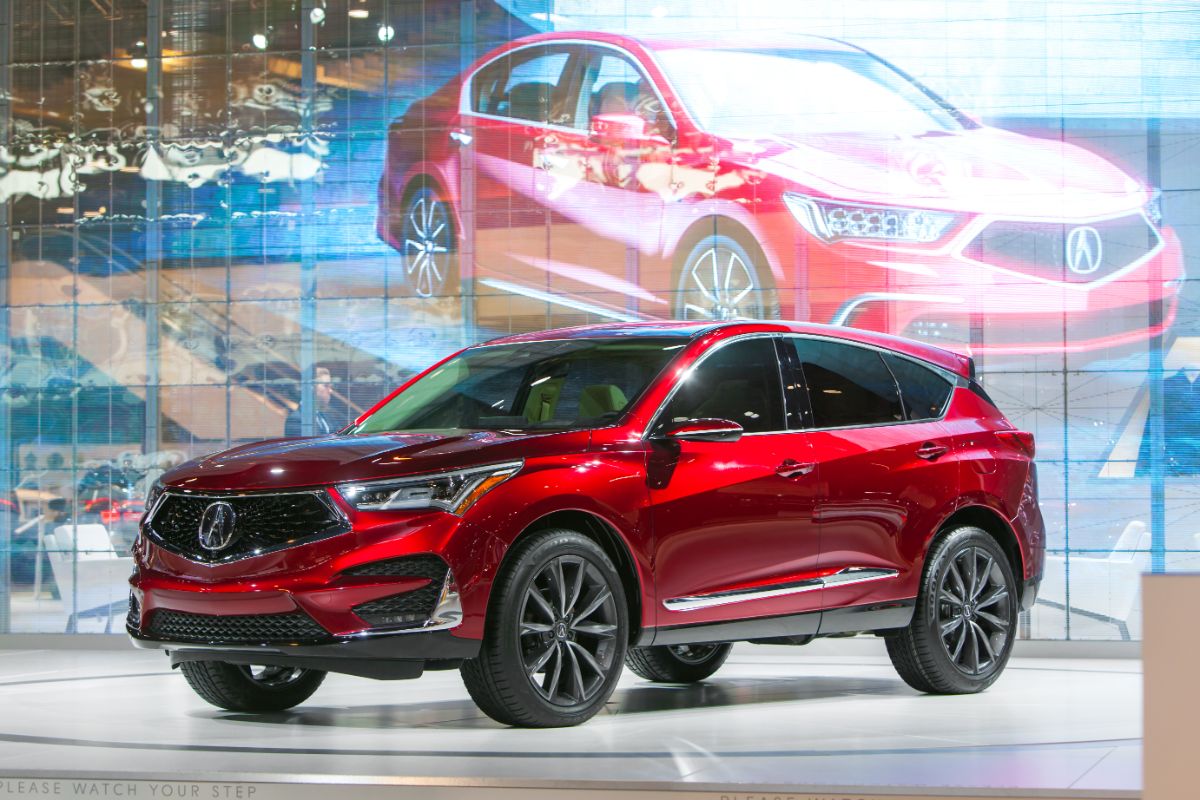 Similar in price and style to the Cadillac XT4, the Acura RDX costs $40,100 for the base model and has a similar powertrain to the Cadillac. The engine of the Acura is also a turbocharged inline four-cylinder that produces 272 horsepower and 280-pound feet of torque.

Like the Little Caddie, the RDX will only seat five passengers. However, like the other cars in this group, the back seat folds down to expand your cargo space.

Towing capacity is a full thousand pounds below the XT4, and the RDX can only tow up to 1500 pounds, but it can hustle from 0-60 in 6.4 seconds,  one of the best times in this group. 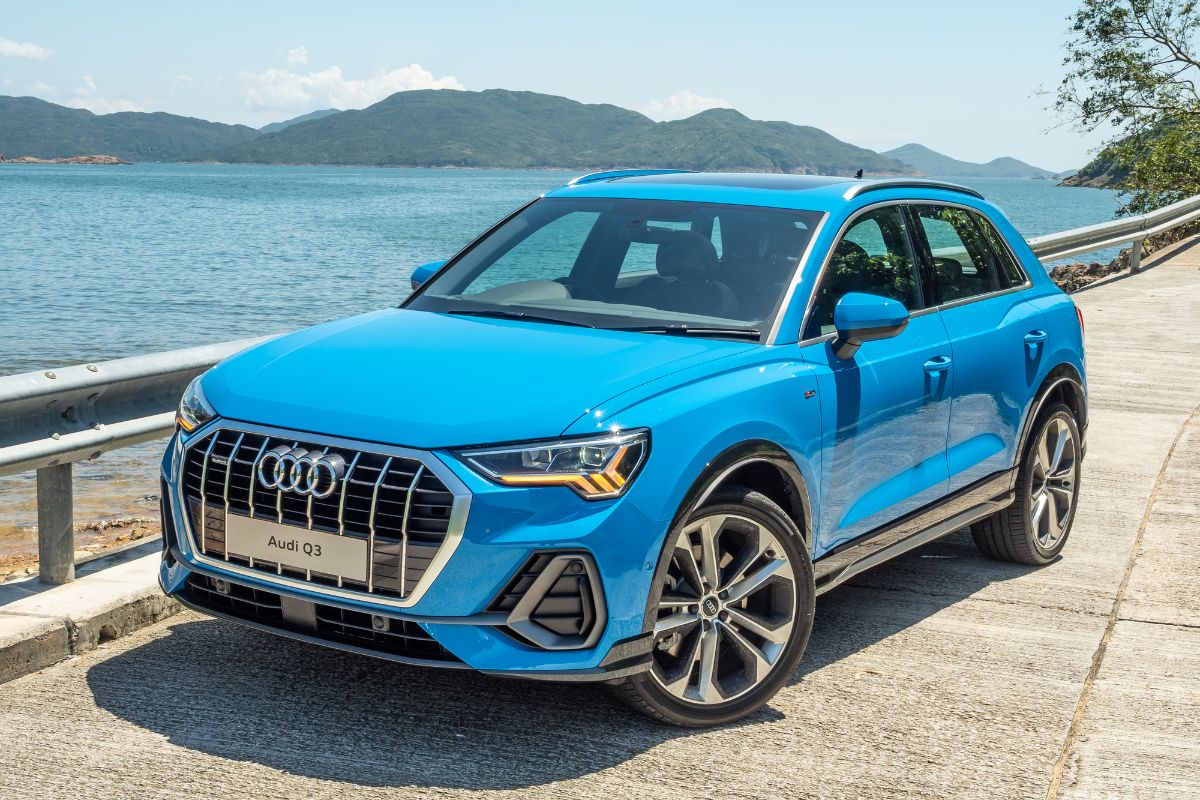 Although not a new design, getting your hands on a 2022 AudiQ3 may be difficult. However, the entry-level price of $36,400 is in line with the Cadillac XT4. Unlike the Cadillac, though, the Audi Q3 comes standard with a Quattro (all-wheel drive), deriving power from the engine via an eight-speed automatic transmission.

Powering those four wheels is an inline four-cylinder that displaces 2.0 liters and develops 184 horsepower and 221-pound feet of torque. The Q3 will run up to 60 miles per hour when powered with this engine in a languid eight seconds.

Like the other cars here, the Audi Q3 seats five in comfort. In addition, the fuel mileage of the Q3  is 23 city and 30 highway miles per gallon, placing it right in line with the Cadillac XT4. 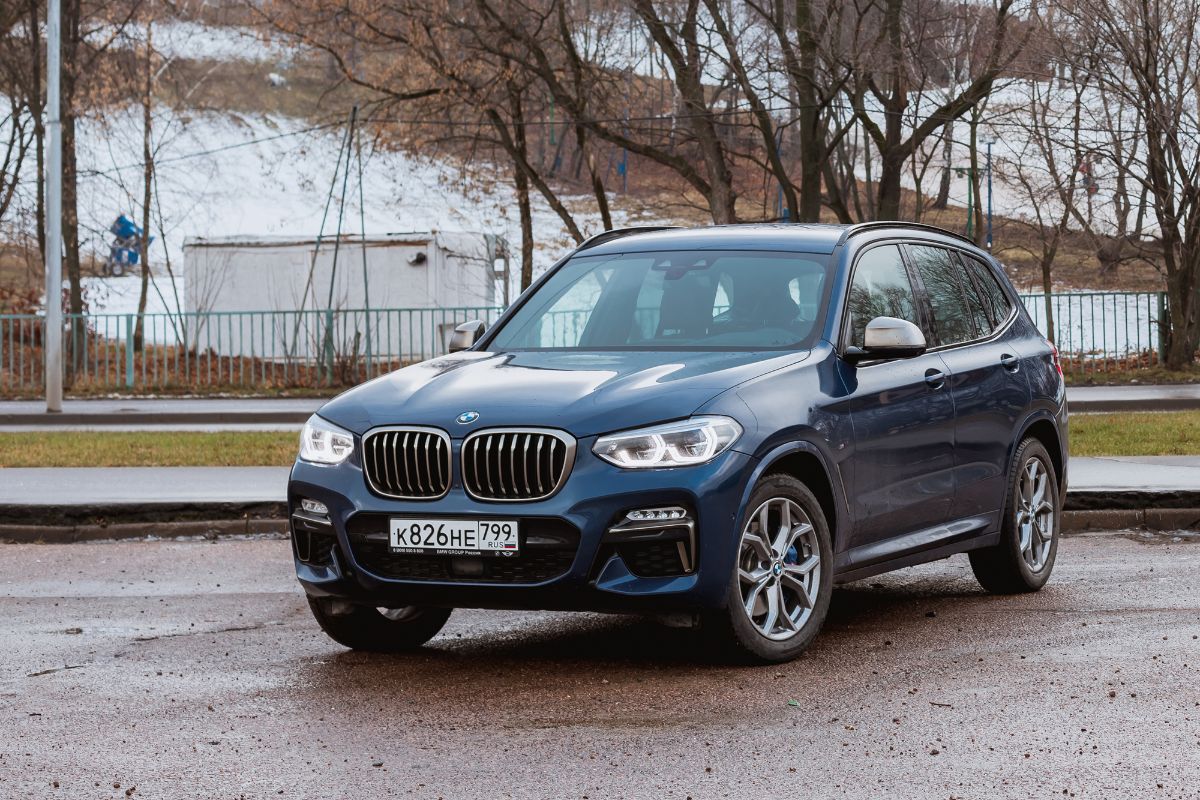 Although the XT4 and X3 are almost identical in size, equally powered, and from two of the top luxury carmakers globally, the BMW X3 has a price that is thousands of dollars above that of the Caddie.

However, all-wheel drive is standard for the base price of $43,700, putting its price in the ballpark of the other cars here. Powered by a 2.0-liter inline four-cylinder with intercooled twin turbochargers, standard, the BMW X3 turns out 248 horsepower and 258-pound feet of torque.

All four wheels are driven through an eight-speed automatic transmission. Fuel mileage for the X3 is 21 city/ 28 highway and 23 combined miles per gallon. The X3 will run up to 60 miles per hour in 6.4 seconds.

Seating in the X3 iDrive is for five, and the rear seats fold down to offer a large cargo bay. Whether equipped with the standard four-cylinder engine or the upgraded BMW stalwart inline-six, the BMW has a towing capacity of 4,400 pounds. 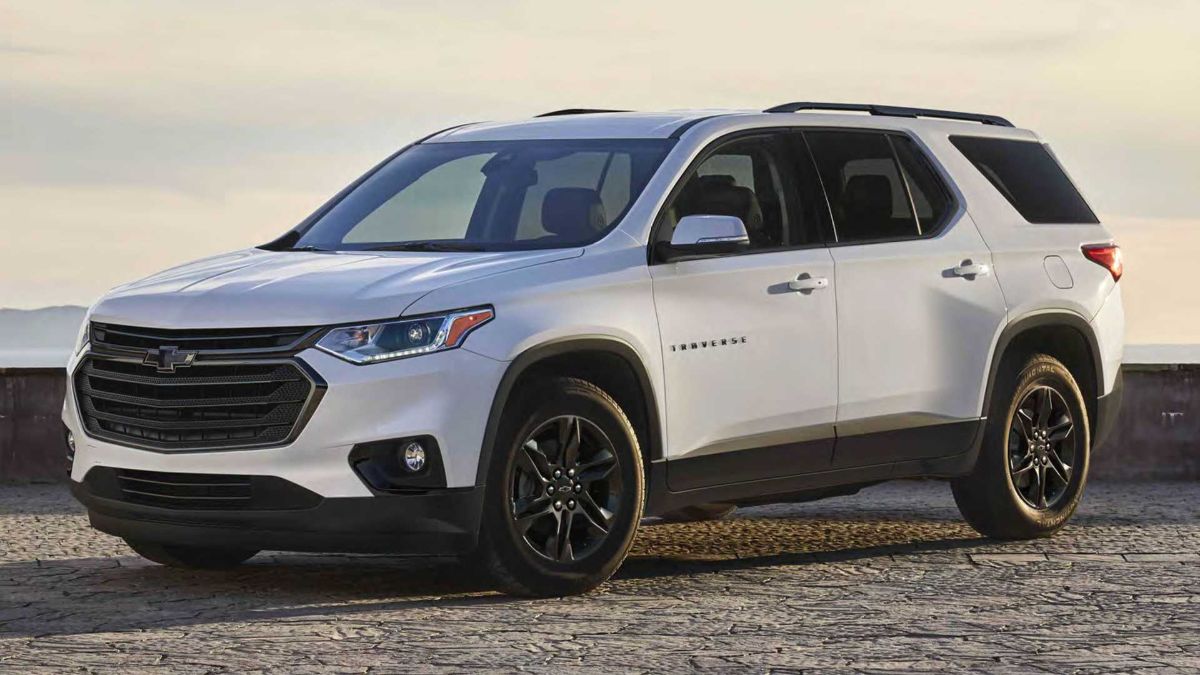 Although not considered a luxury SUV, the Chevrolet Traverse is a little bigger than the Cadillac XT4, a little roomier, and able to tow up to 5000 pounds.

Most importantly, the MSRP for the base model Traverse LS comes at $7000 less than the Cadillac XT4. However, the Chevrolet Traverse LT Leather is $39900, which is similar to the price of the Caddie XT4 and more capable.

The standard power for the Traverse is a V-6 that displaces 3.6 liters and develops 310 horsepower and 266-pound feet of torque. Fuel mileage is 18 city and 27 miles per gallon, and towing capacity is higher than any vehicle in this group, at 5000 pounds.

When equipped with the V-6, the Blazer can go from a standstill to 60 miles per hour in 6.9 seconds. Since this is a larger SUV than most of the others here, it does have a third-row seat and seating for seven to eight.

It is also available with an all-wheel-drive system. It is not as luxurious as the Cadillac is. However, it’s worth a look and a test drive with almost the same fuel mileage and a lower price. 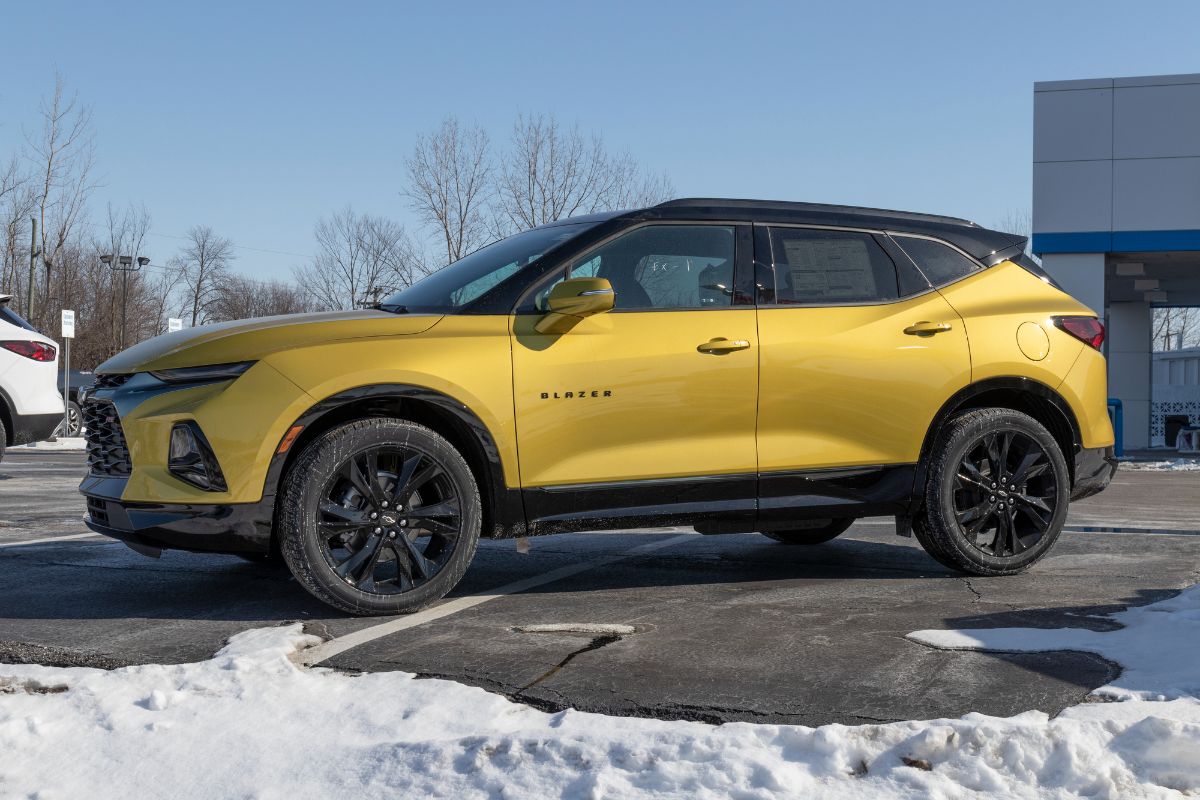 Well, it’s not a K5. However, it is similar to the Cadillac XT4 in size. The base four-cylinder engine is almost identical in power, and its MSRP is $38,235 before rebates.

The standard power for the 2022 Chevrolet Blazer is a 2.0-liter four-cylinder engine that produces 228 horsepower and 258-pound feet of torque. The power is put to the ground via a nine-speed automatic transmission. It can propel the Blazer from zero to 60 miles per hour in seven seconds, flat.

However, what Chevy offers in the Blazer isn’t available in the Cadillac XT4, and that’s a 3.6-liter DOHC V6 that produces 308 horsepower and 270-pound feet of torque. This power option gives you the ability to pull up to 4500 pounds.

When paired with the optional all-wheel drive, you will have a capable SUV with the power to haul people and cargo. Of course, extra power comes at a cost when you purchase and at the pump, and the V6 powered Blazer returns a combined mileage of 22 MPG.

When equipped with the four-cylinder engine, mileage is 22 city/ 29 highway and 25 combined miles per gallon. These margins aren’t significant if you need a vehicle with the capacity to haul five adults and a good-sized load. 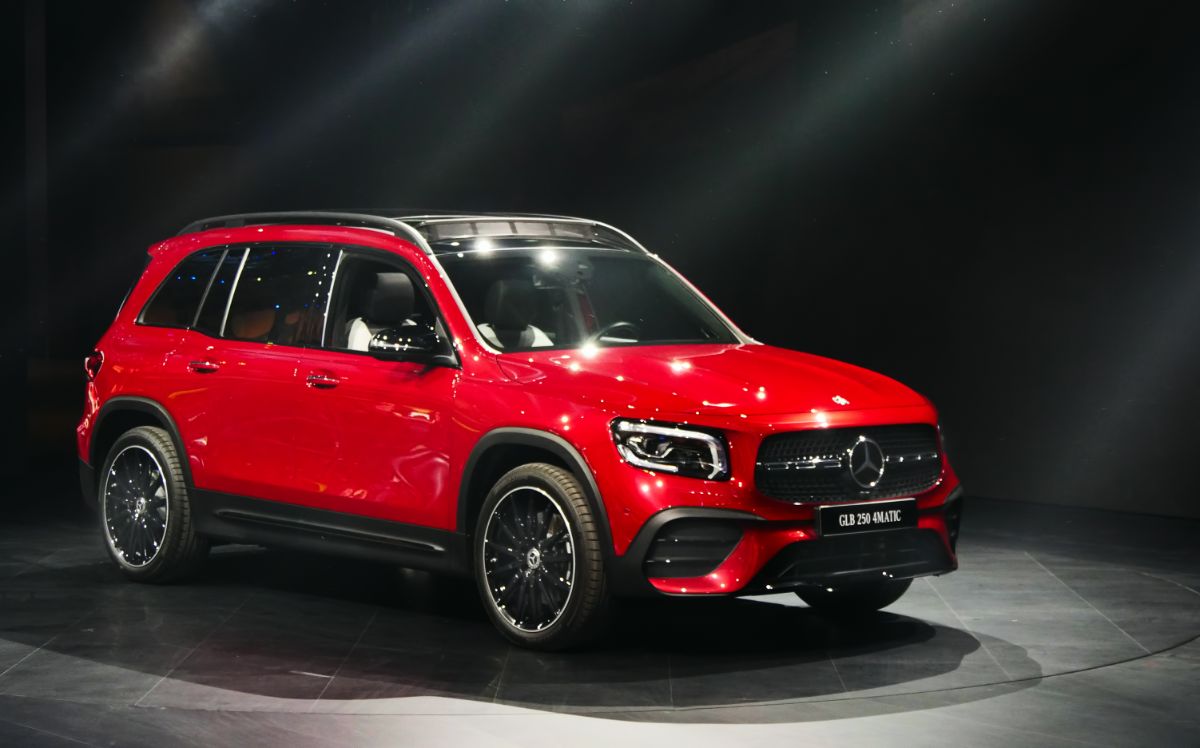 In line with most SUVs on this list, the Mercedes Benz GLB 250 Series is very similar in price, size, and features to the Cadillac XT4.

Power from the engine is put to the front wheels through an eight-speed dual-clutch automatic transmission; however, all-wheel drive is available on some models. The fuel mileage of the Mercedes Benz GLB 250 is 24 city and 32 highway miles per gallon.

Although the Mercedes is almost identical in size to the Cadillac XT4, the back window isn’t as steeply sloped. This extra space offers more headroom in the back seat and enough room in the cargo area for a third-row seat. 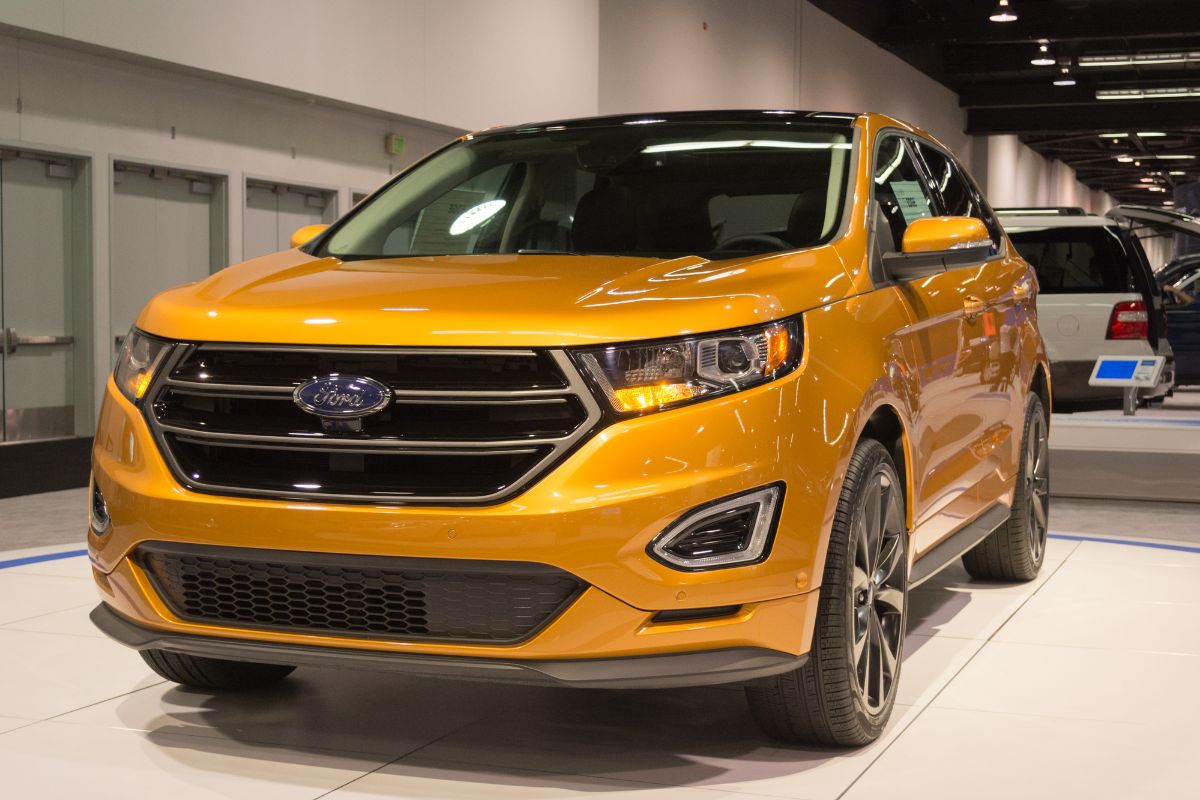 No, it’s not a luxury line vehicle, but regarding price, performance, and features, it is very similar to the Cadillac XT4. Powered by a twin-scroll turbo, 2.0-liter four-cylinder that produces 250 horsepower and 280-pound feet of torque, the Edge wins the four-cylinder power advantage of the cars on this list.

In addition, it has a similar price to the XT4, and at $38,445, an all-wheel-drive system is a standard feature. The mileage for the Edge SEL is 21 city/ 28 highway. Its time from a standstill to 60 miles per hour in seven seconds. That speed is comparable to many on the list.

Standard seating is for five passengers and their gear. Unfortunately, there is no third-row option on the Edge, as there is on the Mercedes and the Traverse.

The towing capacity of the Ford Edge is 3500 pounds and is the same for the 2.0-liter engine and it is for the optional 3.5 liter V6. The vehicle’s capacity is 1500 pounds of people and their gear, giving the Ford Edge the ability to haul 5000 total pounds of cargo. 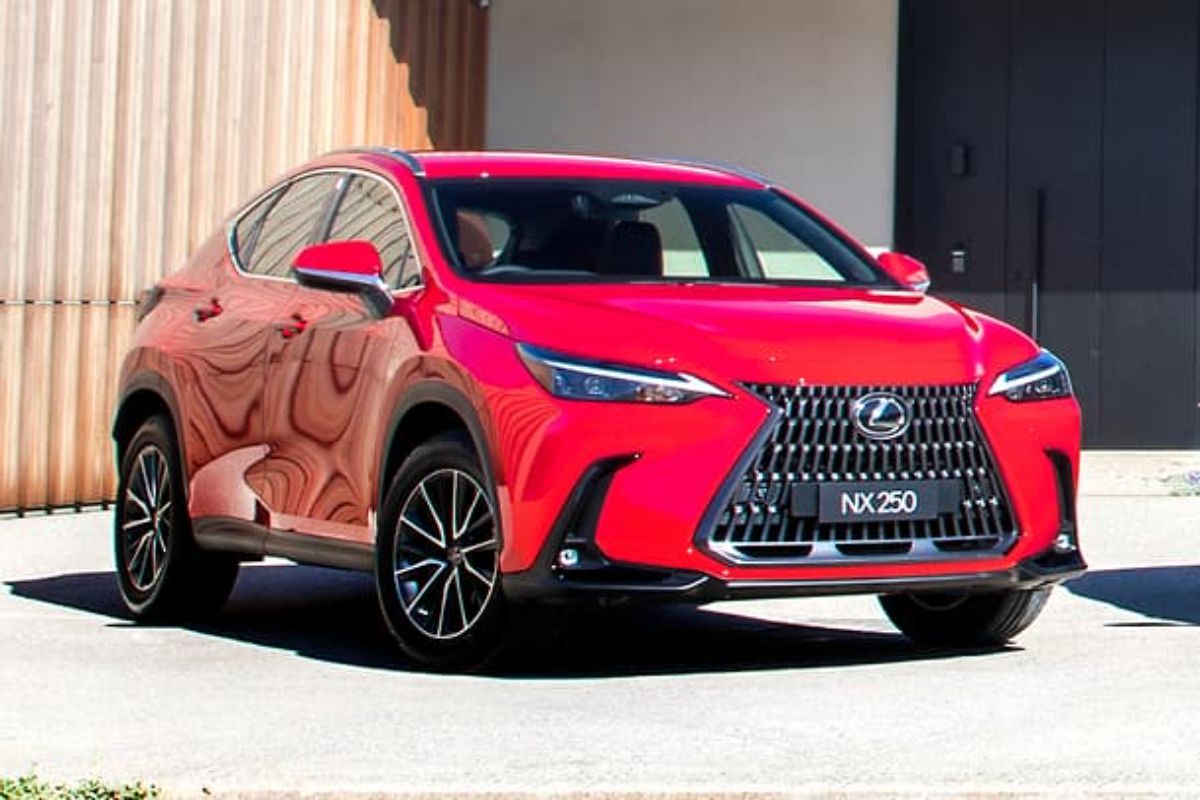 The Lexus NX is similar to the Cadillac XT4 and a head-to-head competitor. They are luxury SUVs from their respective Marques and are similar in price, size, power, seating, and towing capacity.

Power for the Lexus NX comes from a 2.5-liter four-cylinder producing 230 horsepower and 184-pound feet of torque. This combination will take the Lexus NX 250 on a slog to 60 in 8.2 seconds, the slowest car in this group.

Gas mileage, however, is on the upper end of this list, and the NX 250 returns 26 city/ 33 highway and 28 combined miles per gallon. Again, these are some of the best numbers in this group of cars.

Power is sent to the front wheels via an eight-speed automatic transmission, and for $1500 above the base price of $39,025, your Lexus NX can be equipped with an all-wheel-drive system.

The seating capacity is five, and there is no third-row seat available. Towing capacity for the Lexus NX 250 is a meager 2000 pounds, which is less than the Caddie is. 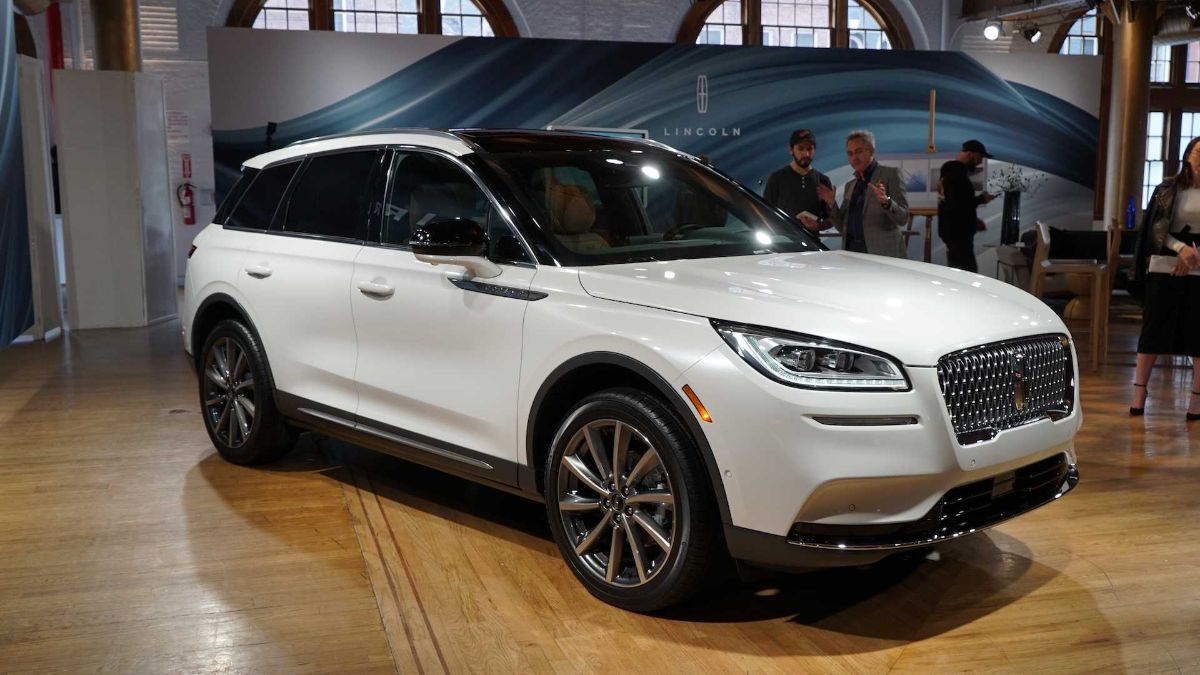 Arriving on the scene in 2020, the Lincoln Corsair is their answer to a competitor for the XT4 Cadillac. It is available with three different power sources, including a hybrid drive system.

The base engine is a 2.0-liter inline-four that produces 250 horsepower and 280-pound feet of torque and powers the front wheels via an eight-speed automatic transmission.

The zero to 60 times with this power configuration is 7.3 seconds. Fuel mileage is 22 city/ 29 highway and 25 miles per gallon combined, which, like this vehicle’s speed, is similar to the XT4 and many other cars on this list.

The price is close, and the MSRP for the Lincoln Corsair Standard is $36,370, and adding all-wheel-drive will cost you another $5000 to the sticker price. Like the Cadillac and most of the other cars on this list, the Lincoln Corsair is a five-seater with no option for a third-row seat.

However, it has the power to tow up to 2000 pounds. There are three models of the Corsair, and only the Corsair Grand Touring comes with an all-wheel-drive system as standard equipment. 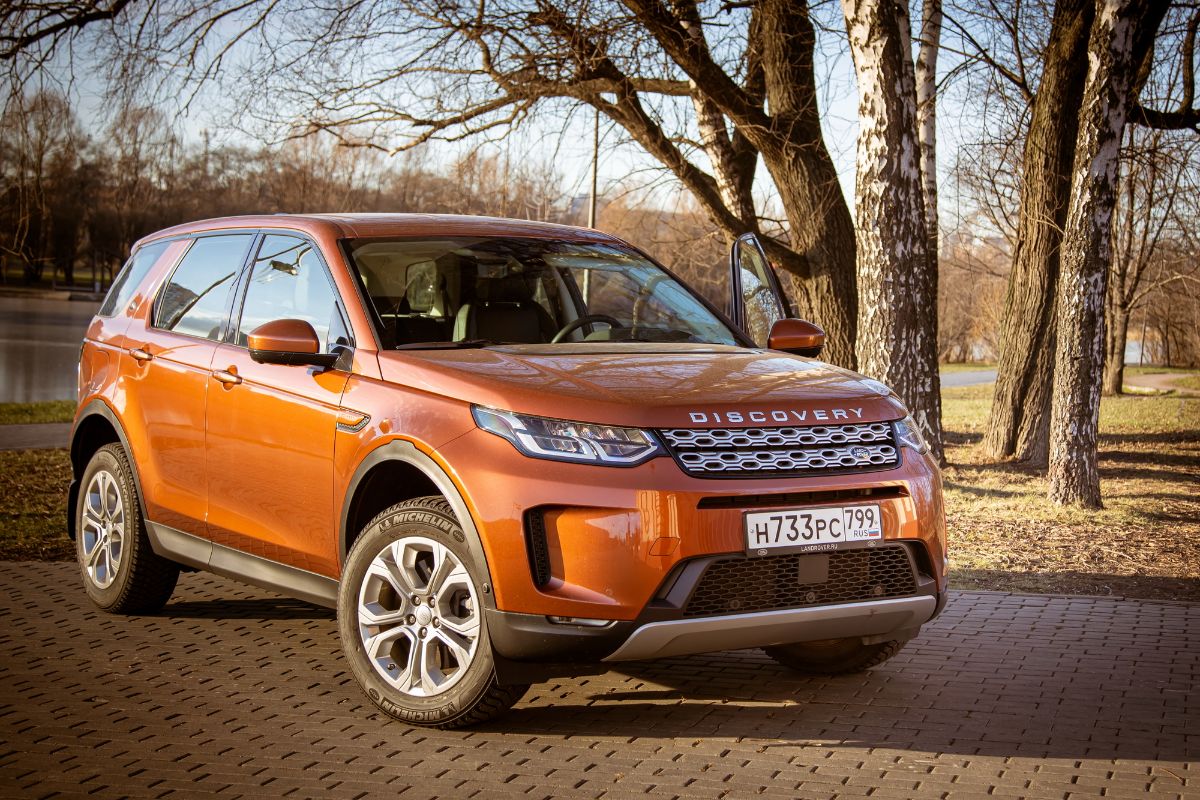 Another luxury brand, the Discovery, is similar in size, power, and abilities to the Cadillac XT4; however, the MSRP is $43,300. For that price, you get a small luxury SUV powered by a 2.0-liter inline-four that develops 246 horsepower. Its mileage is 19 city/ 23 highway, below most cars here.

It is a five-seater, but you can order a Land Rover Discovery with a third-row seat, expanding seating to seven. The most significant difference between the Discovery and the XT4 is towing capacity. The Land Rover can tow up to 4400 pounds.

It isn’t a speedster either, and the zero to 60 time for the Discovery Sport is 7.3 seconds, which is in keeping with cars here that sell for much less. 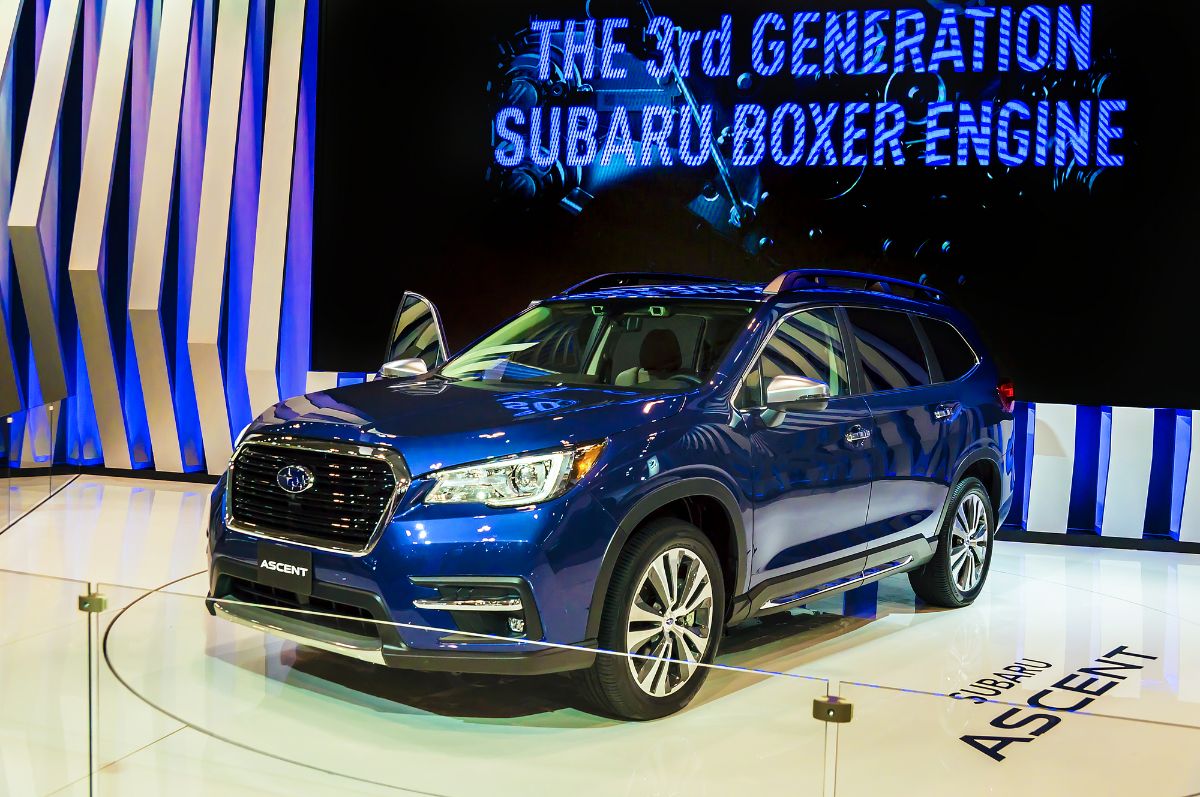 The first car to include an all-wheel-drive has a similar vehicle to the Cadillac XT4 in size, power, and features. The Ascent is a relative newcomer to Subaru. Although it is priced much less than the Caddie at $32,295, it is a contender if you are looking for a high-quality, safe car.

Powered by a turbocharged 2.4-liter four-cylinder that develops 280 horsepower and 277-pound feet of torque, the Ascent can sprint from zero to 60 in seven seconds, and that is with all-wheel-drive.

The Ascent seats five but has a third-row seat, which is an excellent option for the price. In addition, the Ascent is the largest Subaru ever built, similar to the Cadillac XT4 in size and capabilities.