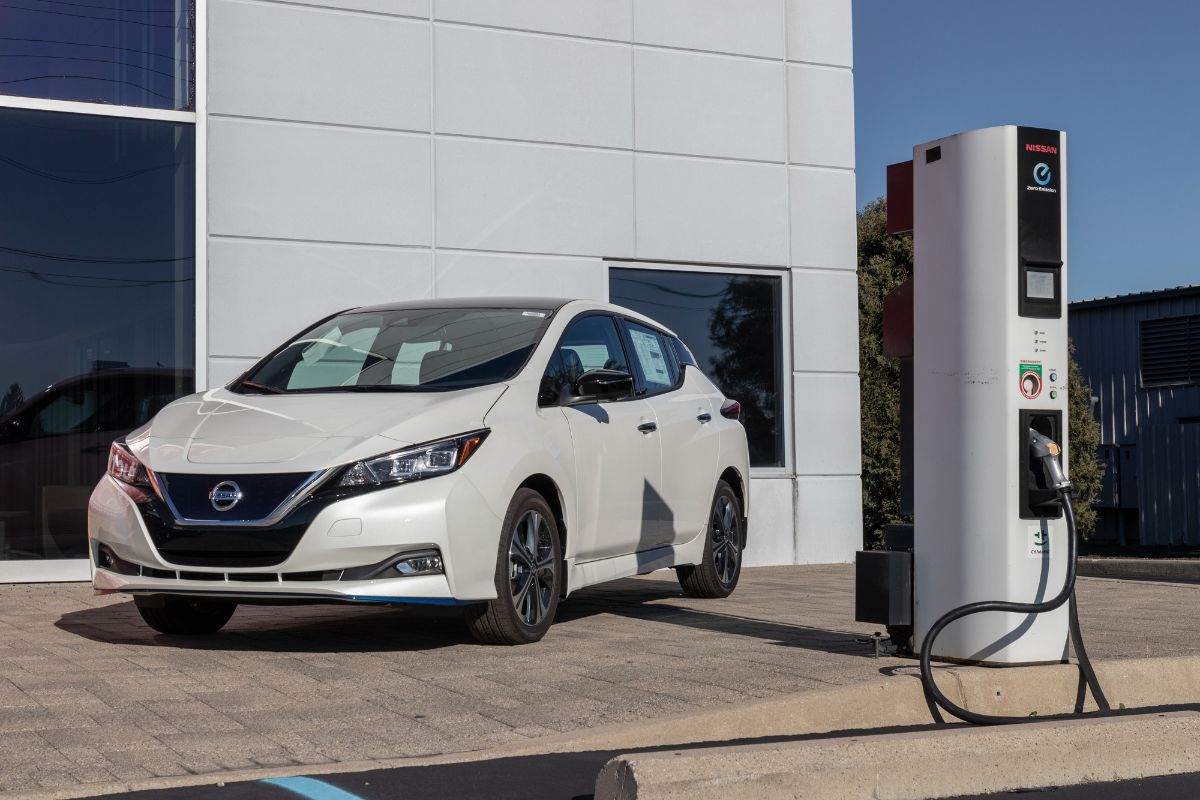 Sedans are a popular vehicle option for their mix of affordability, economy, and interior space. You can find luxury sedans, but the appeal and reach of lower-cost sedans mean most manufacturers have a model in the field.

If you’ve been looking for a sedan and are considering the 2022 Nissan Sentra, this look at its features and how other vehicles compare to it can help you feel more comfortable with your purchase.

Remember that the manufacturer’s suggested retail price (MSRP) will not include some basic fees like transportation to a dealership, so the final price will be higher even if you don’t add options.

The Nissan Sentra is a compact and affordable 4-door sedan that brings enough modern features to warrant new car pricing, but the low price shows strongly in the lowered performance compared to more expensive models.

The mix of long ridges, sharp angles in the details, and overall smoothness give the Sentra a decidedly modern and snappy appearance. For someone unaware of automobile models, it would be easy to mistake a Sentra for a higher-end vehicle.

There are four trim levels on the Nissan build page: S, SV, SR, and SR Midnight Edition. The basic S trim has the core features of the higher-level trims, so you won’t see a large price jump from its $19,610 starting MSRP.

With notable infotainment improvements, the SV trim comes in at $20,670. The SR’s $22,000 price tag includes 18″ wheels, sporty additions to the rear and interior trim, LED headlights, and a grille replacement.

For another $695, the SR Midnight Edition includes the same additions with a dark color scheme and a badge for bragging rights. When fully packed with features at the highest trim level, the build price comes to just under $29,000. 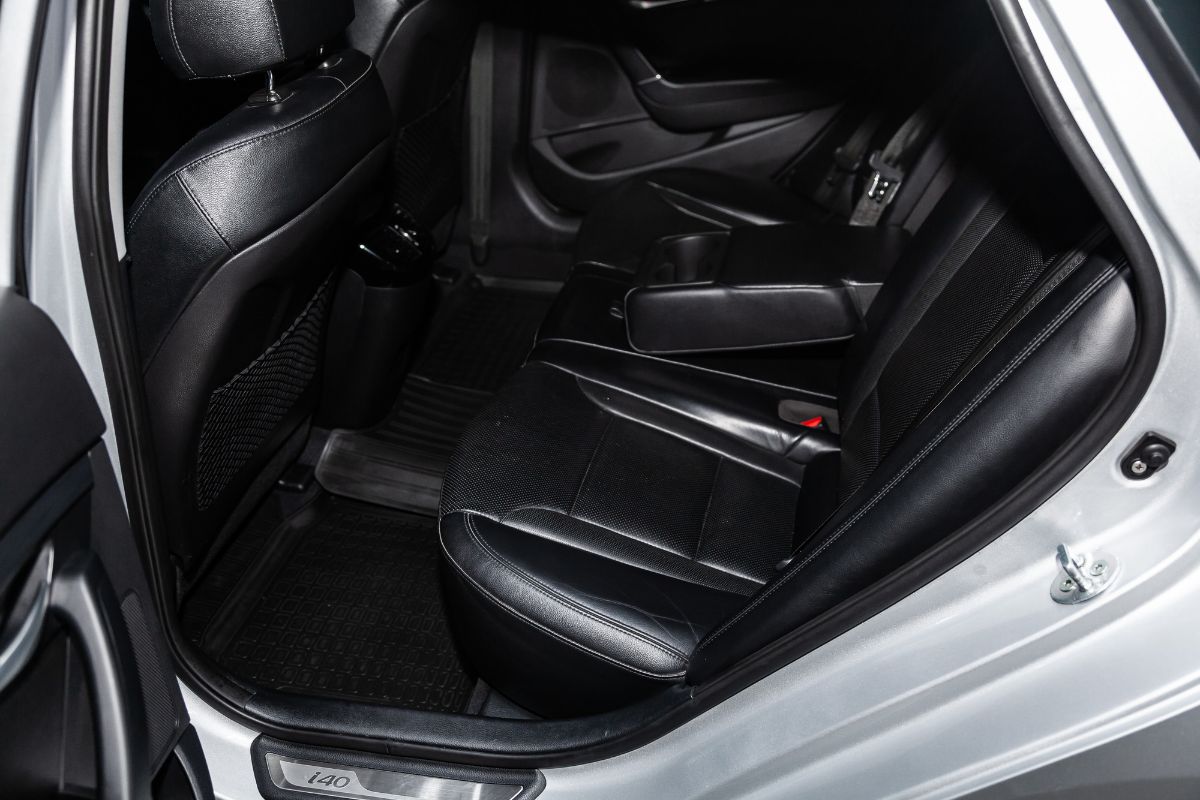 The Sentra pushes the edge of compact sizing with 110.3 cubic feet of interior space that seats up to 5 passengers and a 14.3 cubic foot cargo area.

With the help of the trunk organization options, there’s plenty of room for a full load of groceries or all of the kids’ backpacks and musical instruments on the way to school.

The acceleration and speed of the Sentra are lacking, and there are no performance upgrade options available at the time of building. The engine is a 2.0L V4 that gets 149 hp with no options for replacement.

The continuously variable transmission (CVT) doesn’t have the same problems that plagued the 2012-2016 models, and it helps the Sentra achieve a respectable expected fuel economy of 29 mpg city and 39 mpg highway. 0 to 60 times range from 8.3 seconds to 9.2 seconds according to various independent testers, and the top speed hovers around 120 mph.

The Sentra absolutely shines when it comes to safety. An NHTSA 5-star rating is a definite plus as a family vehicle that’s likely to carry precious passengers through busy streets and crowded school zones.

The braking power quickly halts the Sentra, taking just 122 feet to stop when traveling at 60 mph.  The stopping power is supported by an automatic braking system that detects both cars and pedestrians in either direction.

Rear cross-traffic alert, blind-spot warnings, and lane departure warnings help the driver stay more aware of their surroundings. At higher trim levels, the drive-assist display will show these alerts and other helpful pieces of info like road signs. 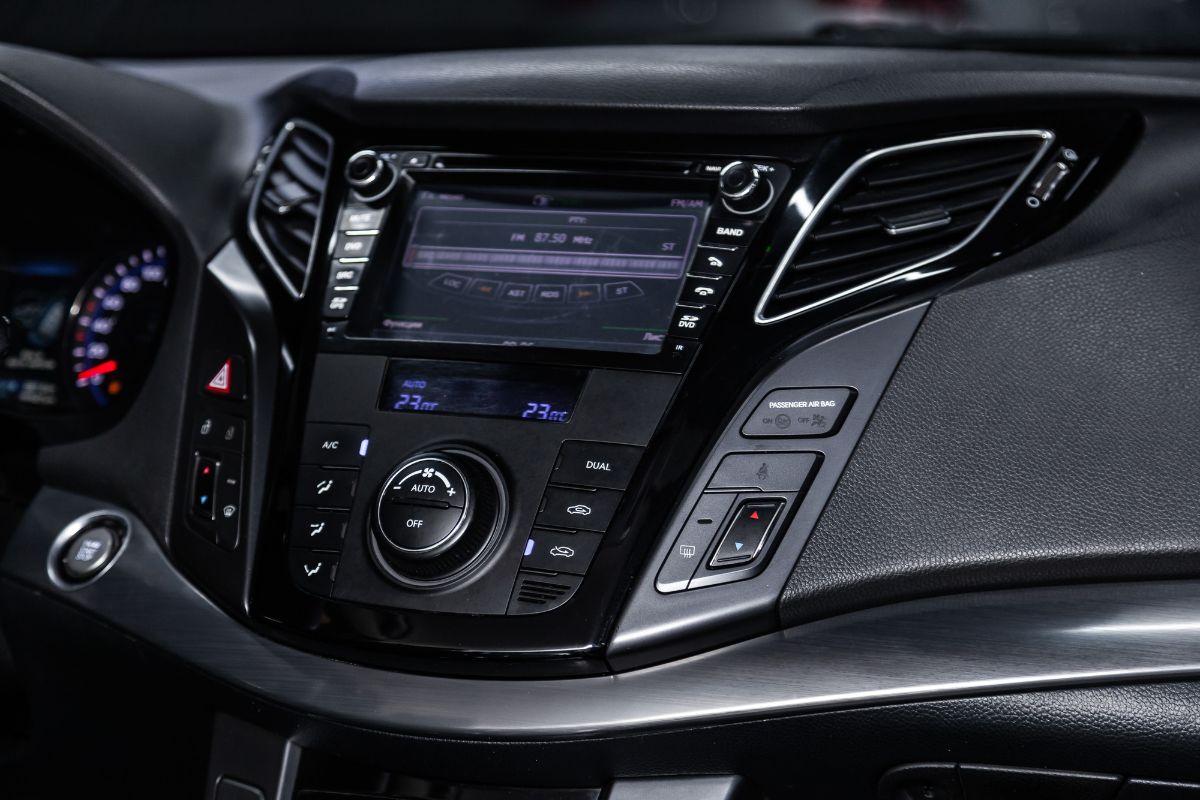 The S trim comes with a 7″ touchscreen and mobile device integration via Apple CarPlay and Android Auto.

Higher trim levels bump the screen up to 8″, add a NissanConnect Wi-Fi hotspot to keep the whole family connected on road trips and provide convenient USB ports for both the front and back seats.

The Top 3 Comparisons for the Nissan Sentra

The field is rife with competition, and there is plenty of room for argument over which is the best. These three are not necessarily the best in performance or value, but they showcase the Sentra’s strengths and weaknesses by how closely they match. 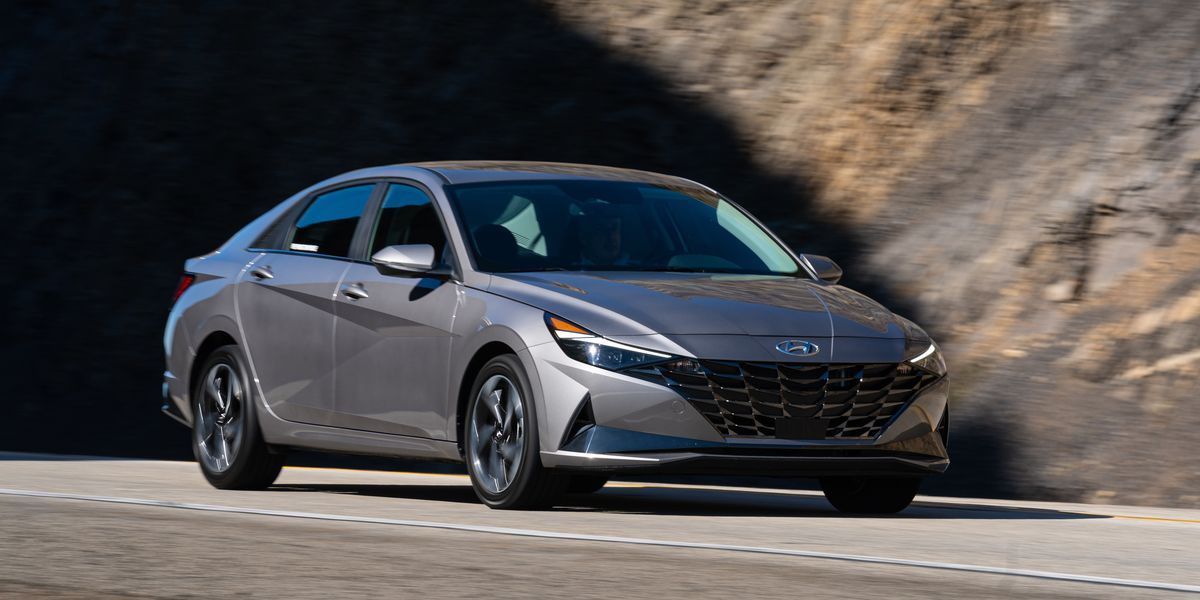 Stately edges and a unique grill pattern help the Elantra stand out, though it still carries the same modern sedan look of most new models. The MSRP ranges from $19,950 to $28,350 for the Hybrid Limited.

Note that there is a more expensive model called the Elantra N that is not the same thing as the N Line.

The combined digital instrument cluster and touchscreen display create a slick aesthetic more common to pricier models. You can even download a digital key app, though be sure to keep your phone secure if you do. 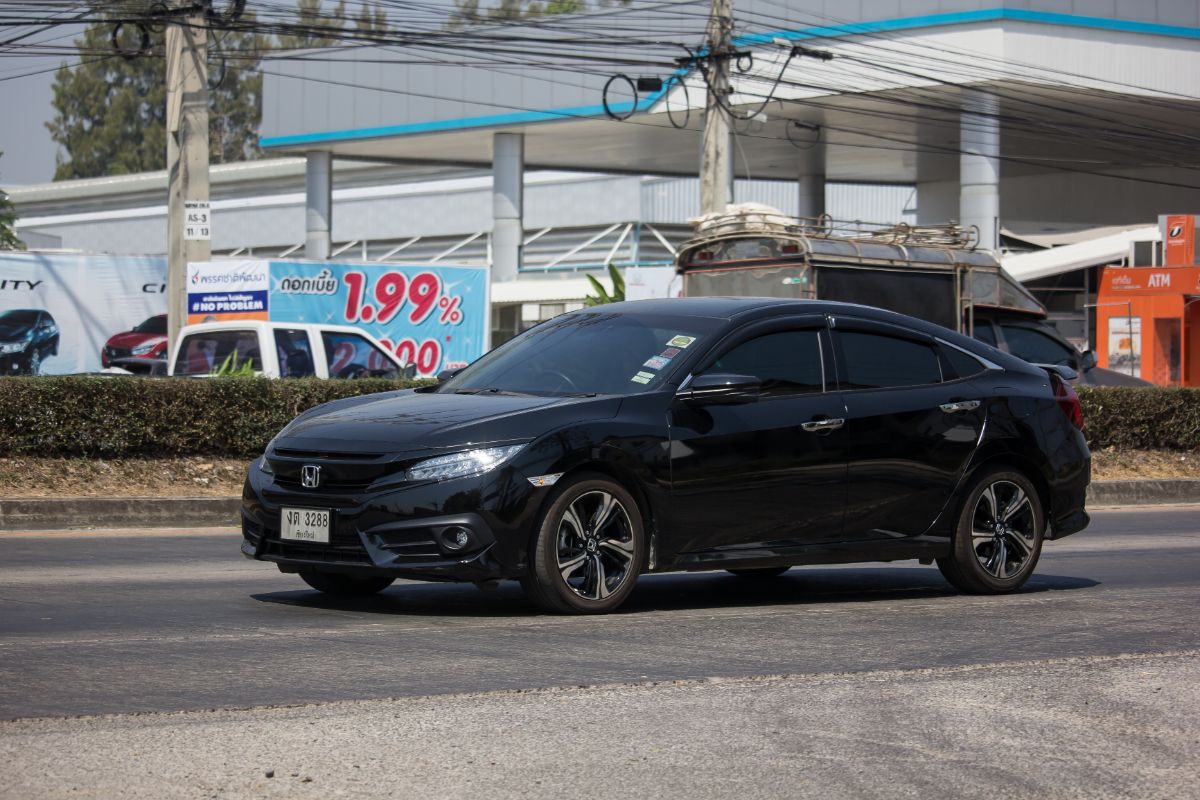 The Civic has a higher price compared to the Sentra, and it pays off more in the upper trims. With the base trim, the Civic already beats the Sentra’s fuel efficiency by a hair at 31 city mpg and 40 highway mpg.

Selecting the EX trim brings the economy up to 33 city mpg and 42 highway mpg, though that dips down on the Touring trim. The base 2.0L, 158 hp engine hits 60 in about the same time as the Sentra, but the stronger engine gets the time down to 7.5 seconds.

Cargo volume is negligibly in the Civic’s favor by 0.4 cubic feet. The 99 cubic feet of interior room is smaller, and that cuts to 96.6 in the turbocharged trims. The Touring trim guards the 9″ touch-screen display upgrade, but the digital driver information interface is available at the lowest trim. 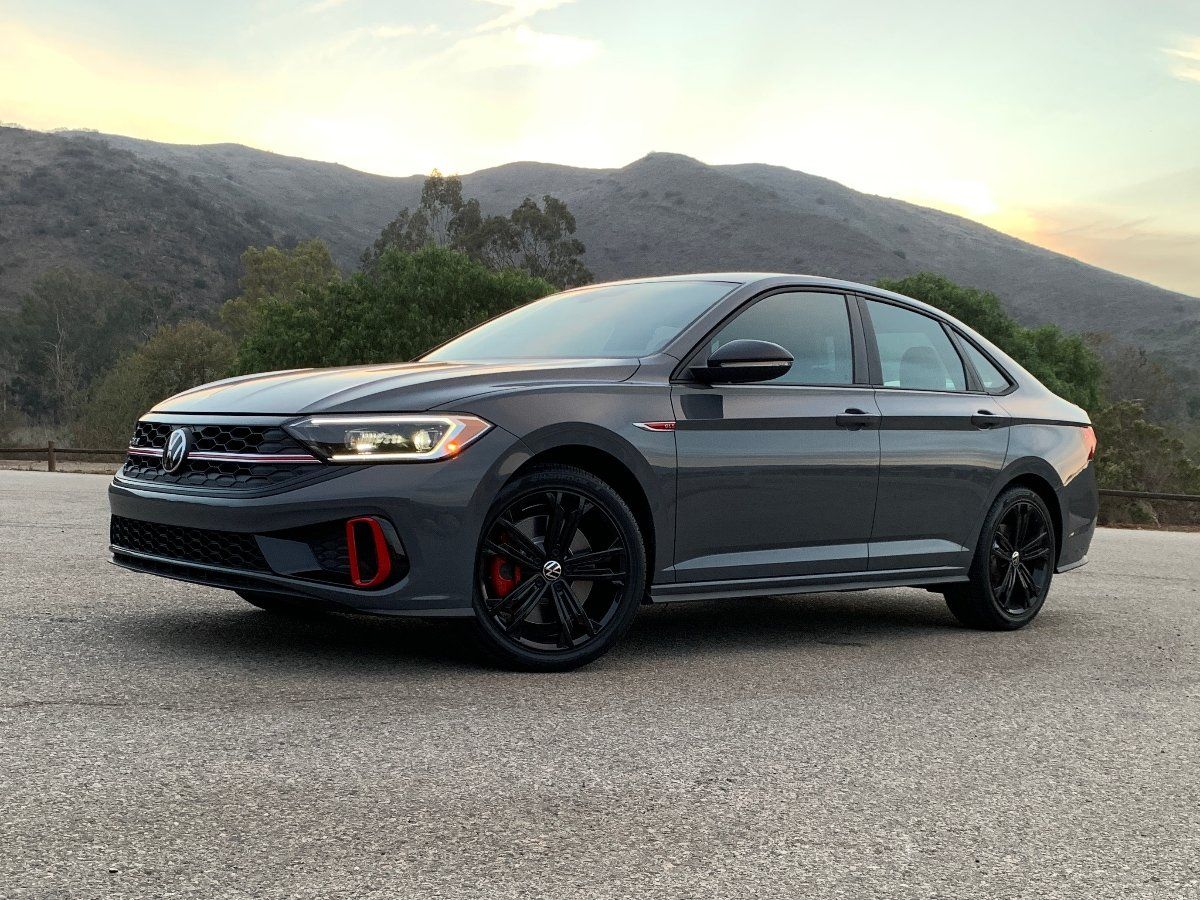 Like the Sentra, the Jetta is a compact sedan with a low price and modern features. Five passengers is a stretch with a smaller interior, but the cargo space is comparable at 14.1 cubic feet.

The starting price of $20,195 is higher, and the SEL trim’s $27,795 is more than most Sentra builds. Safety-focused technology like lane assist, forward collision warning, and autonomous emergency braking is part of the IQ.DRIVE package that is optional until the Sport trim.

Despite all trims sharing the same basic engine, the 1.5L turbo is more than acceptable when it makes 60 mph in a speedy 7.6 seconds. The SE and SEL come with Tiptronic, a feature that lets you manually shift the automatic transmission.

All trims are fuel-efficient with around 30 mpg in the city and 40 on the highway. The S trim with the IQ.DRIVE package is right in the middle of the Sentra’s pricing and well worth the cost.

Notable Competitors for the Nissan Sentra 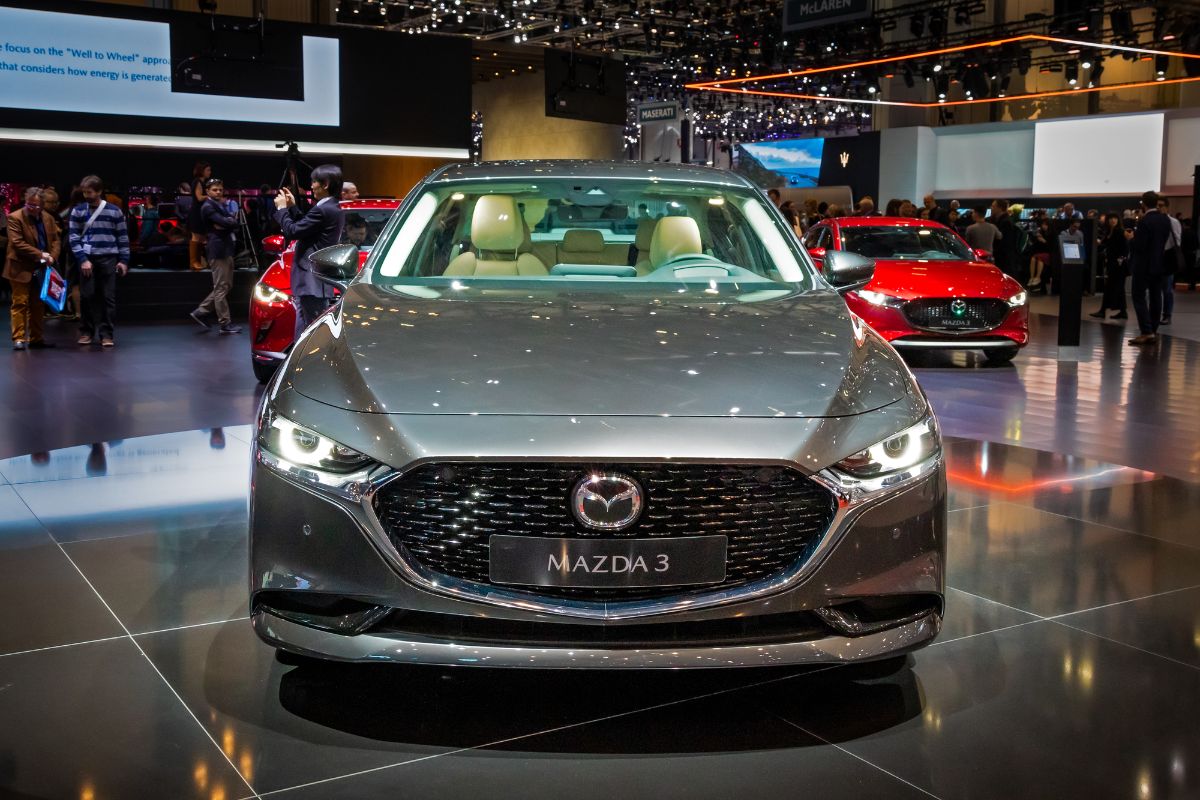 Mazda3 trim levels gradually reveal that this is a compact sedan that truly wants to be a sports car. The starting 2.0L, 155 hp engine is swapped for a 186 hp past the first trim level.

If you’re willing to spend over $30,000 on a vehicle, then the performance becomes even better with the 2.5T, 250 hp in the Turbo and Turbo Premium Plus trims.

The fuel economy from the 155 hp engine on the basic trim is 28 city mpg and 36 highway mpg. It drops to 26 and 35 for the 2.5L on higher trim levels, and further down to 25 and 33 with the all-wheel-drive (AWD) option on the Preferred and higher trims.

An 8.8″ center touchscreen and 7″ digital instrument cluster blend well with the interior. It also earned a 5-star NHTSA safety rating thanks to standard assistive technologies. 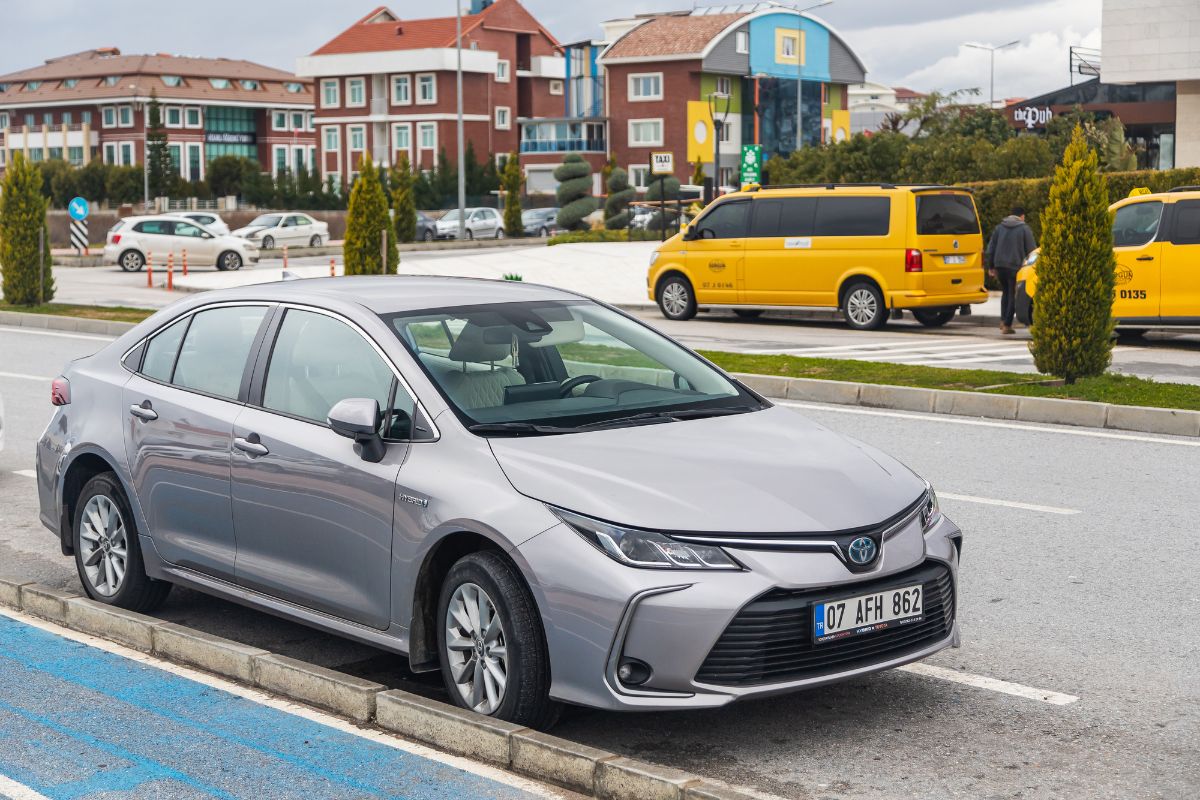 The interior is more cramped in this compact sedan at 88 cubic feet of interior and 13 cubic feet of cargo space. Nine trim levels range from $20,175 to $28,460 for the XSE Apex Edition.

The LE Hybrid option in the middle, at $23,750, has outstanding fuel economy with over 50 mpg for both city and highway driving.

The rest hover around 30 mpg to 31 mpg in the city and 38 mpg on the highway. A respectable 8 seconds for its 0 to 60 time makes it faster than the Sentra. 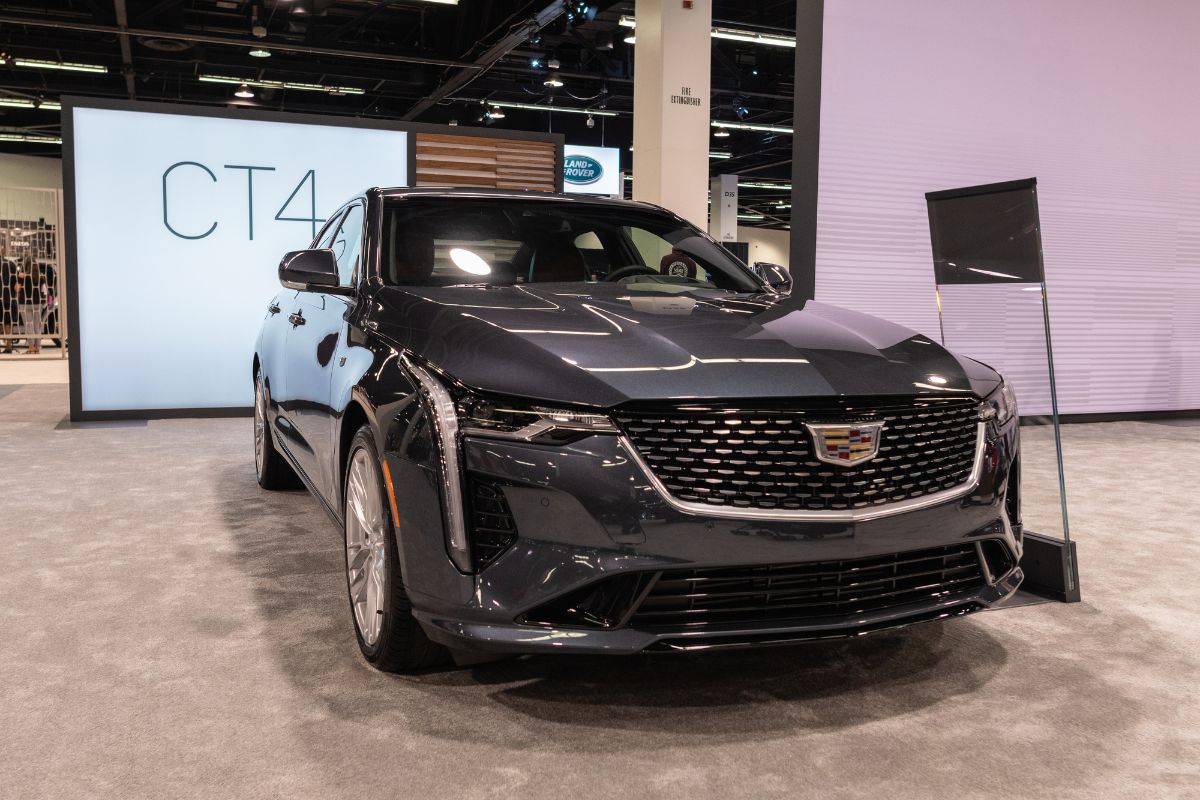 The starting MSRP of the CT4 is higher than the most expensive Sentra at $33,695, but it’s worth considering if you’re already building a pricier Sentra.

A lower fuel economy will also increase the cost of ownership over time, with up to 23 mpg city and 34 mpg highway. For performance, the CT4 leaves the Sentra in the dust with a 5 to 5.4 seconds 0 to 60 time, which Cadillac lists at 4.8 seconds based on initial vehicle movement.

The interior features are comparable to the Sentra, though the wireless charging and built-in Amazon Alexa are welcome additions. Luxury refinement shows in the CT4, but it also shows in the monthly payments. 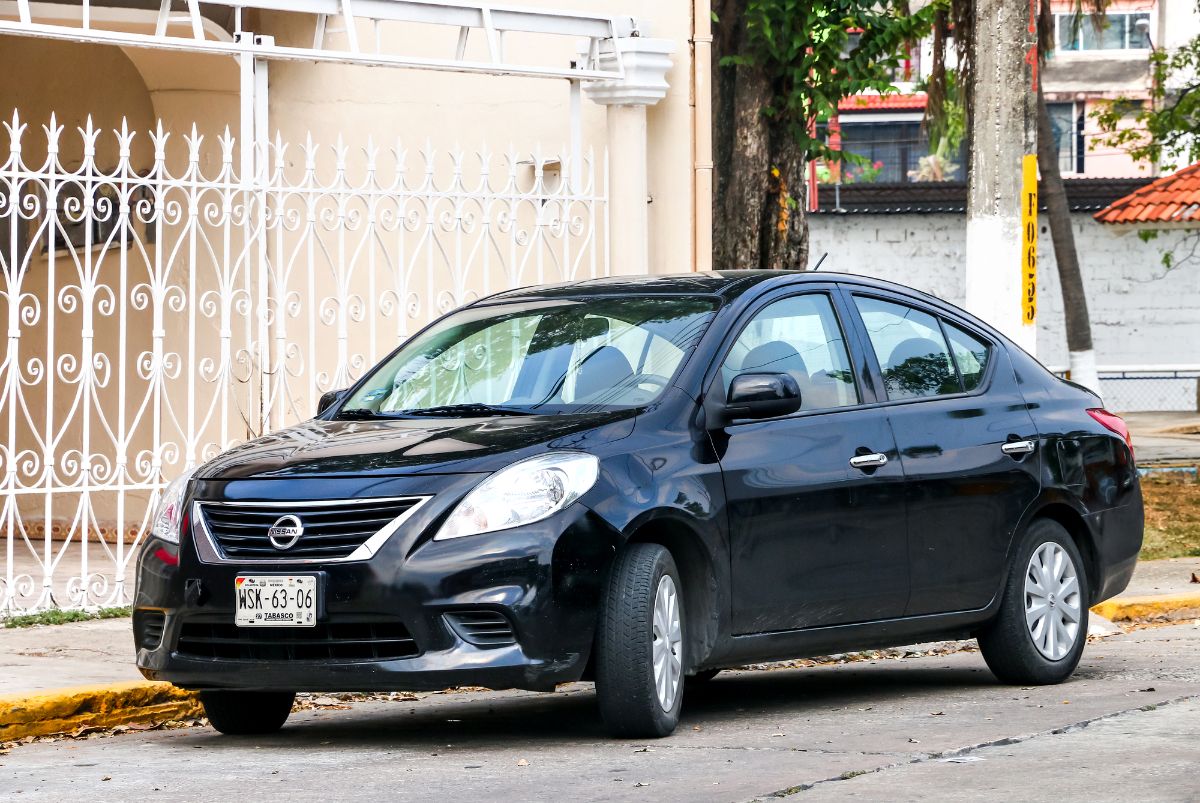 You can see the manufacturer’s influence in the Versa’s similarity to the Sentra, but it resembles a squished version of its larger relative.

A base price of $15,180 makes the Versa an incredibly inexpensive new car, and the top tier SR at $18,590 costs less than a Sentra S. With the Xtronic CVT, it’s also more fuel-efficient, getting up to 32 city mpg and 40 highway mpg.

Like the Sentra, the performance is cut the most to lower the price. A 9.7 second 0 to 60 time is slower than most other sedans on the market, and it’s more sluggish than many van models.

It’s also much tinier than the Sentra with an 88.9 cubic feet interior. Somehow, it has a larger trunk and still fits 5 passengers. 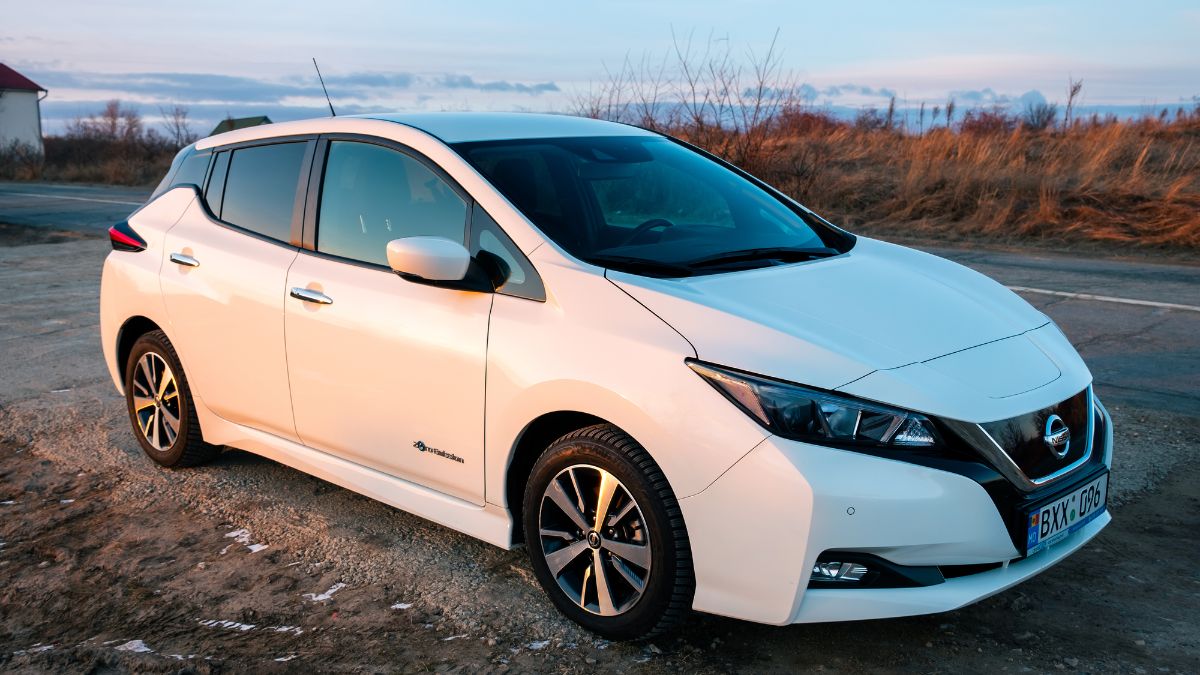 For under the price of a fully-loaded Sentra, you can get a fully electric hatchback from the same manufacturer.

Like the LE hybrid, the savings on gas can make up for the price difference over the life of the vehicle. That holds true even if you are eyeballing the cheaper Sentra models, as long as you drive the Leaf for at least a few years.

That number fluctuates with gas prices, where you charge the electric vehicle, and how much you drive. 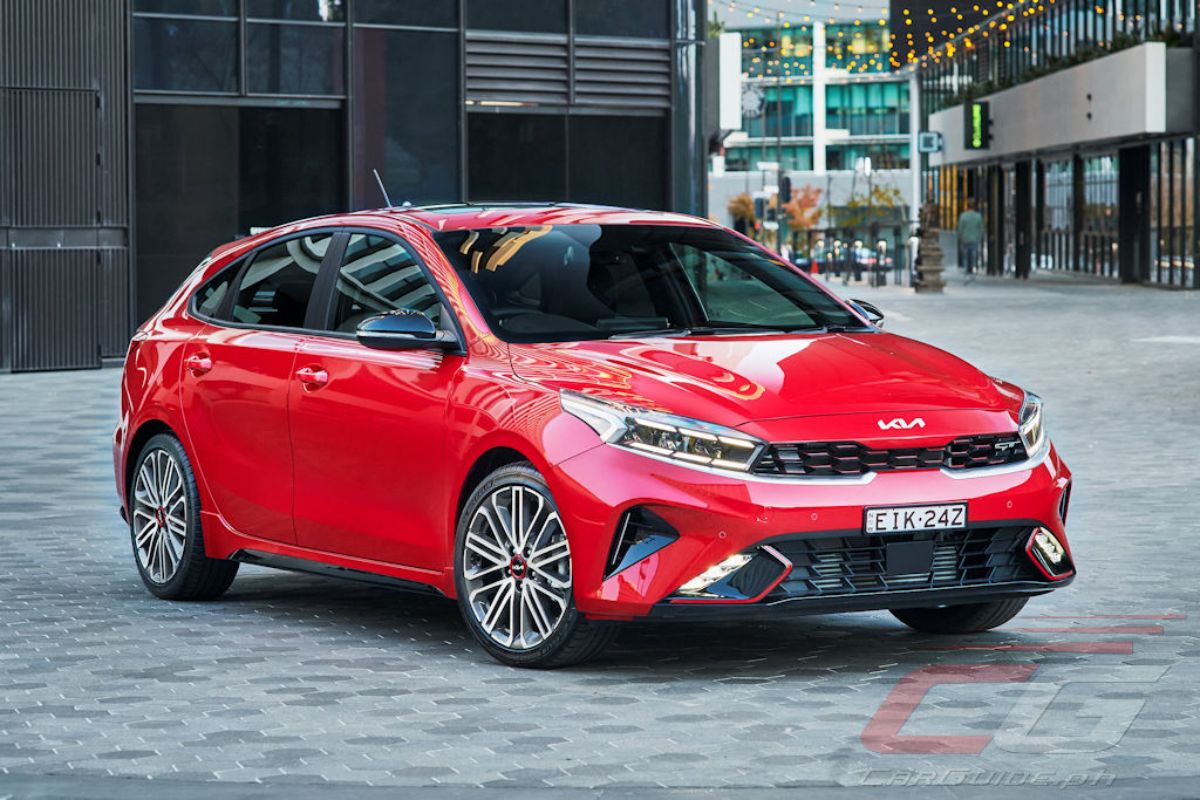 The Forte is a compact sedan within the Sentra’s tier at $19,090. It even has a similar look with a ridged hood and sleek angles. The FE trim starts equipped with a 2.0L V4 that’s just shy of the Sentra’s hp at 147.

Although it has similar core statistics, it still zips to 60 in 8.2 seconds. Performance surges slightly higher with a major engine upgrade option in the GT trim at $23,490 – also available with manual transmission for $24,490.

A 1.6L plus a turbocharger pushes the Forte GT to 60 mph in only 6.7 seconds. A slightly smaller interior belies the larger 15.3 cubic feet in the trunk.

The screen starts out larger, but several useful safety tech features are locked behind higher trim levels and optional packages. That still leaves the GT as a strong competitor to the Sentra SR. 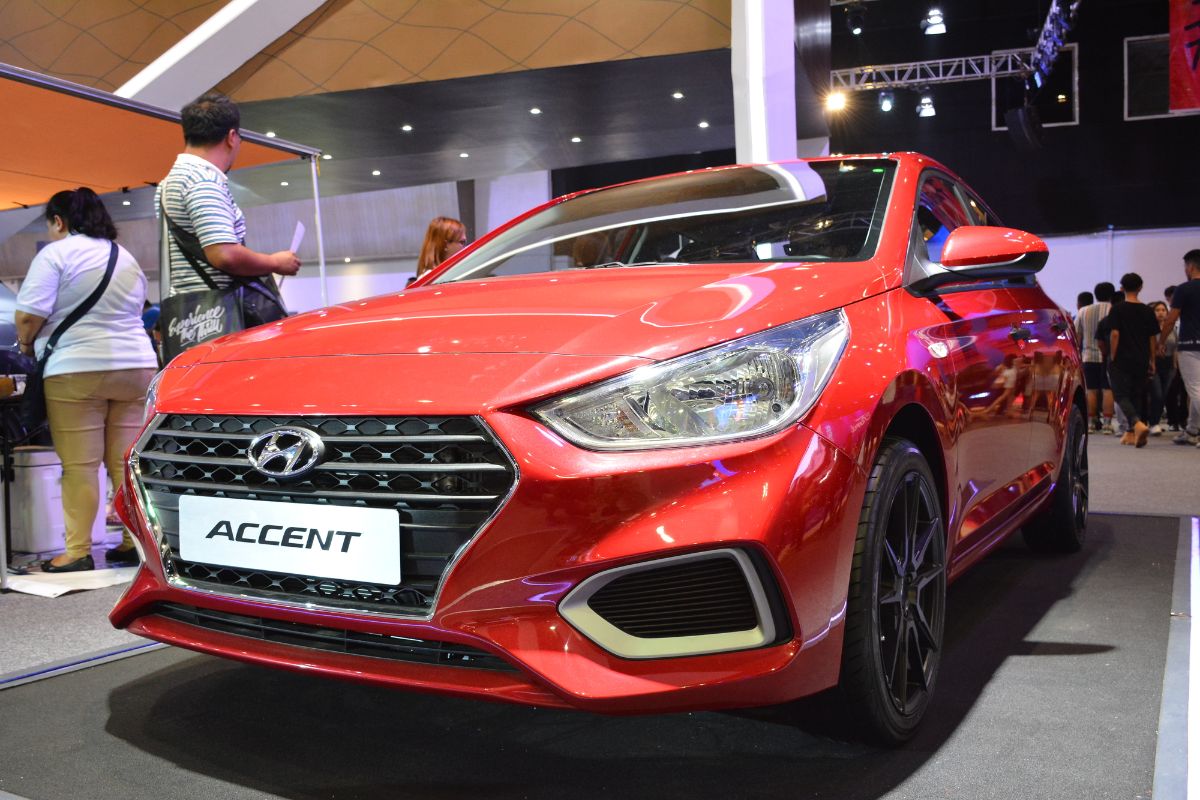 You can feel the loss of 20 cubic feet of passenger volume when you get inside of it, but the trunk’s 13.7 cubic feet isn’t much smaller than the Sentra’s.

The Limited Trim’s full range of safety and interior features is on par with the Sentra S, including rearview cameras, blind-spot warning, Apple CarPlay, Android Auto, and more.

Some of those features disappear on the SE trim, notably the forward collision-avoidance assist and mobile device connectivity. The Elantra is an overall better option from Hyundai, but the Accent cuts a bit off the price. 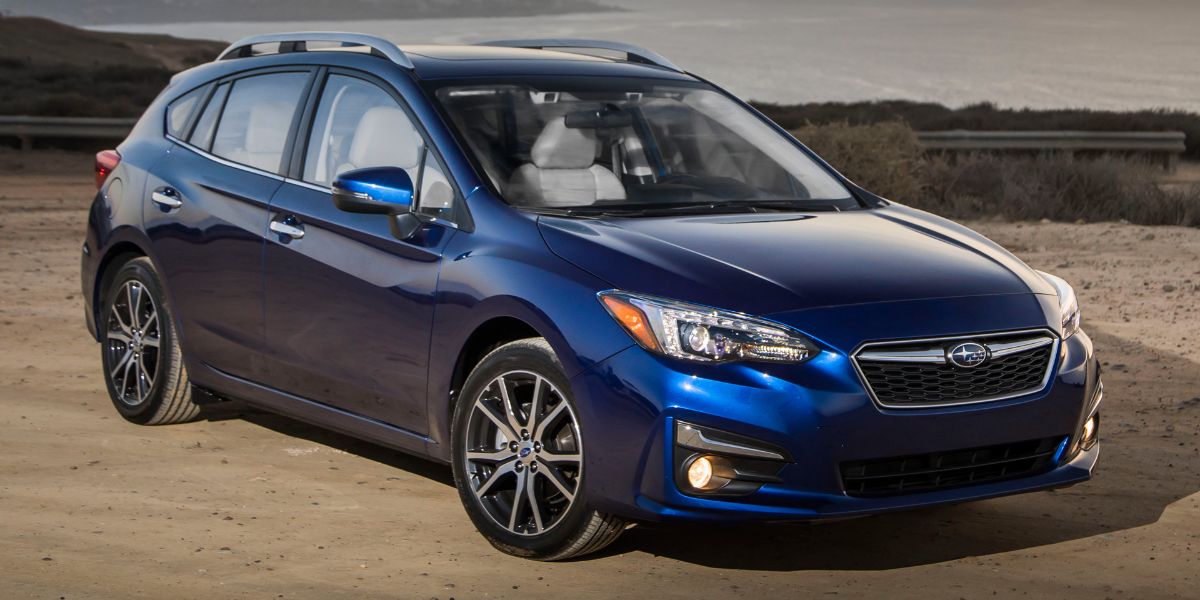 The Impreza’s specs land it right near the Sentra at a slightly lower starting MSRP. Its 2.0L 4-cylinder puts out 152 hp, and it averages about 9.2 seconds for its 0 to 60 time. It’s a little less fuel-efficient at 36 mpg on the highway, and it’s not quite as spacious in the interior or trunk.

The most prominent difference is the standard AWD on all Impreza trims, adding to its appeal for anyone living in an area with frequently poor road conditions.

That includes road slicks, mud, puddles, potholes, and hilly areas. When the nearby roads are properly maintained and the skies are clear, the extra traction control still helps with emergency driving. 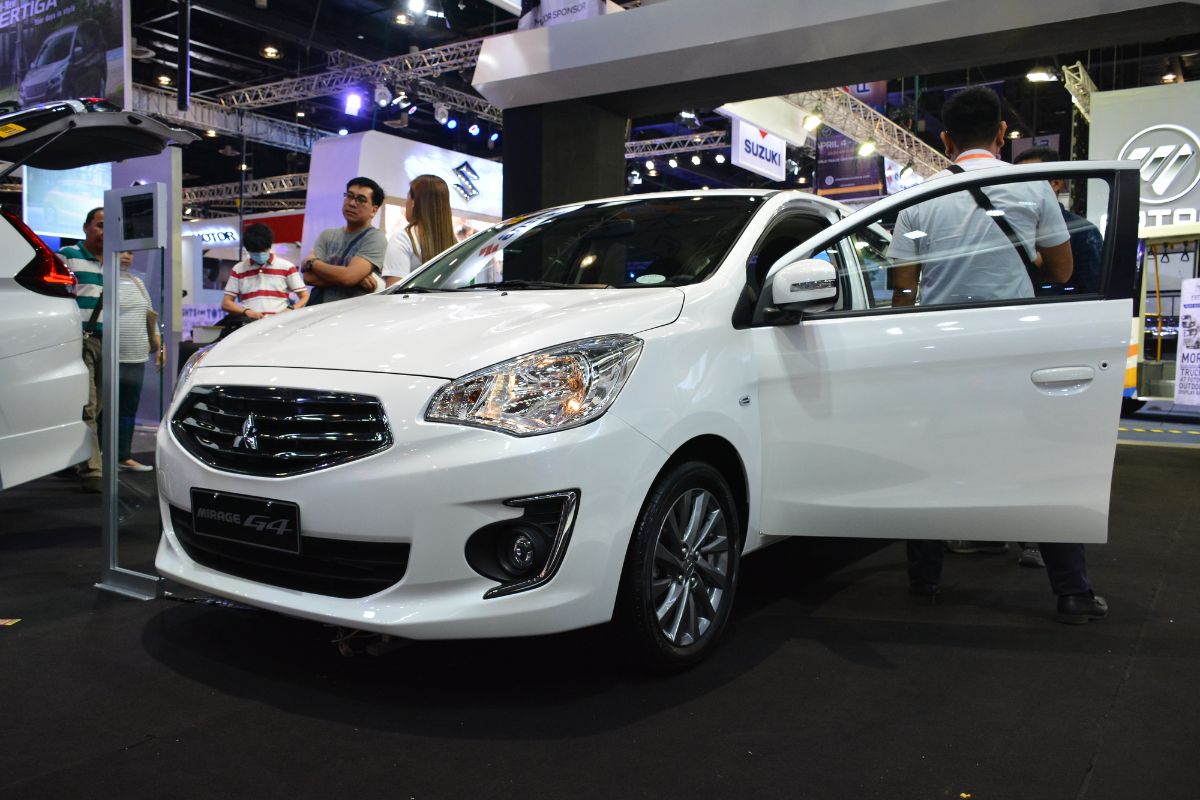 Another cheap subcompact sedan, the Mirage, is negligibly more expensive than the Versa with a $15,645 starting MSRP. 35 mpg in the city is about as good as it gets without getting a hybrid or electric vehicle.

The dealer’s performance page points out the (admittedly impressive) turning radius, but it doesn’t mention the excruciatingly slow 12.8 seconds that it takes to hit 60 mph. While a subcompact, it has an acceptable 12.9 cubic feet in the trunk.

If you are looking for a cheap new vehicle for frequent driving in an urban setting, it can do the job at a low operating cost. With any highway driving, you’ll want to look for a different vehicle.