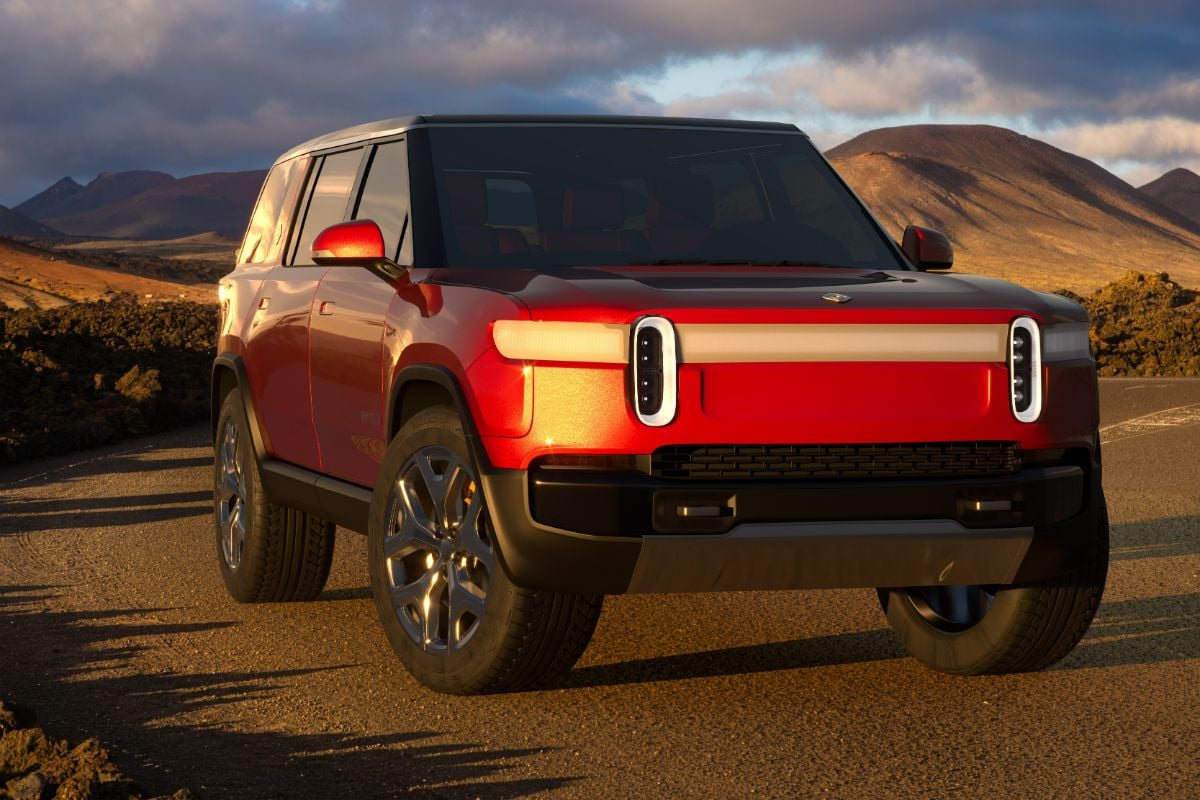 My favorite THREE cars similar to the Rivian R1S are the:

Looking at the Rivian R1S, I immediately think of cartoons and cartoon characters’ cars. I don’t know about you, but for me, the R1S’ eye-looking  headlights especially scream, “comic cartoon character car!” That said, however, humorous as the R1S might look, it means serious business.

The R1S is  Rivian Automotive‘s attempt at getting a share of the so far Tesla-dominated electric car emerging market. It is an all-electric, full-sized on and off-road SUV and capable of going on and off-road. Like all electric cars, it is a revolutionary electric vehicle designed to be not only environmentally friendly but also an exciting and practical way to get around.

The R1S also has other exciting features. Notably, the vehicle has a new safety feature that helps it stand out from the rest. This new safety feature is called Trace Control. It automatically adjusts your speed to keep you in your lane and out of the way of other vehicles.

Apparently, the vehicle has been manufactured to be a truck, SUV, or crossover that is perfect for any environment. It is designed to be able to tackle any terrain with ease. For this reason, the R1S has four different driving modes that make it perfect for any situation.

The modes are everyday, Eco, Sport, and Off-Road. An adjustable air suspension is standard and can raise the R1S to unlock a maximum of 15.0 inches of ground clearance.

The R1S comes with a 128.9-kWh battery pack and a quad-motor powertrain that makes 835 horsepower.  It is an all-wheel-drive-every 2022 R1S has an electric motor at each wheel that provides all-wheel drive and remarkable off-road ability.

Coming with a third row of seating, the R1S is one of a few three-row EVs. This makes it the perfect vehicle for any family that wants to go electric, get around with ease, make a difference, and the world a  different place.

Equipped with all-wheel drive, and an electric motor at each wheel, the  R1S is capable of towing more than 7700 pounds. It has a payload capacity of 1800 pounds.

The Rivian R1S’s features and specs put it in comparative competition with its key EV rivals of the…….. 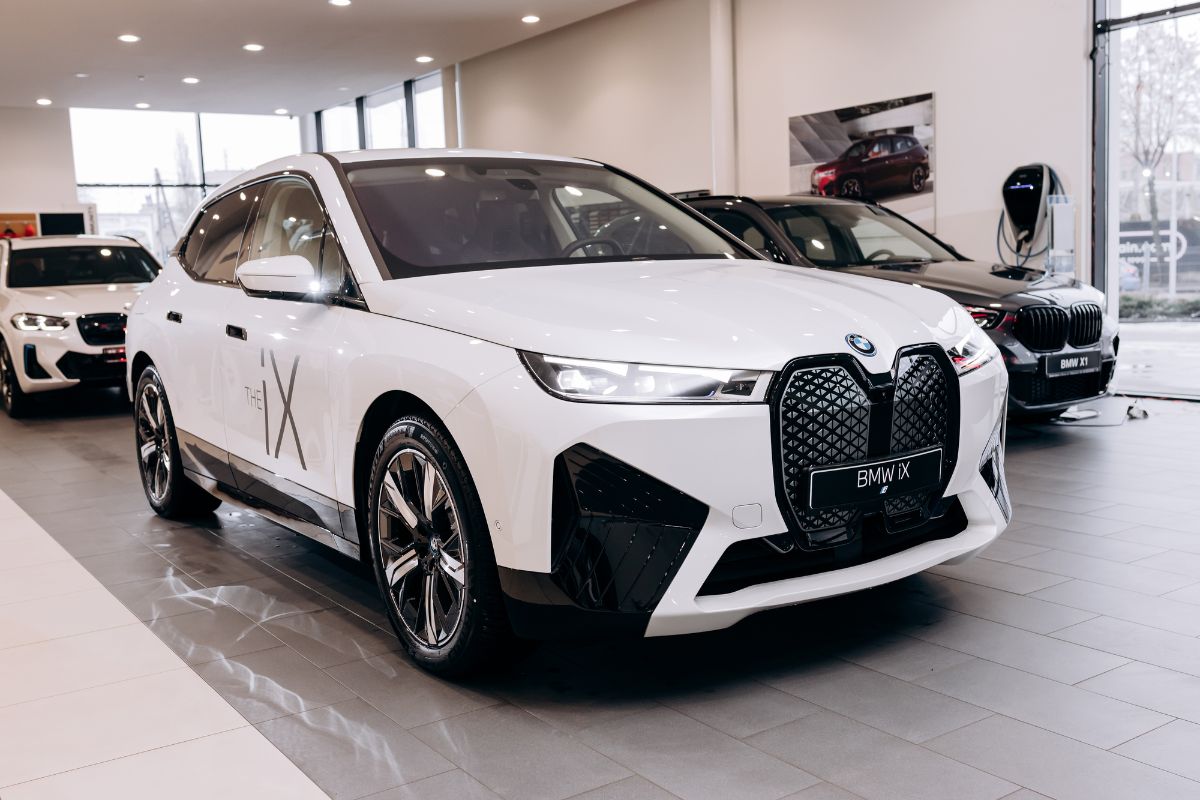 While the R1S has SUVs similar to it, very few of them fall within its price range. One that comes close is the BMW iX. Like the R1S, it too comes endowed with some ugly but beautiful futuristic frontal/grille features. Interestingly, similar to the Rivian R1S, the 2022 iX is BMW’s first all-electric SUV.

Coming with carbon-fiber-reinforced plastic body panels that help save weight, the iX’s cabin is quite spacious. It has ample modern technological features on display. These include a slick, large curved touchscreen instrument panel and a hexagonal-shaped steering wheel.

This BMW also offers a large panoramic sunroof featuring electrochromic shading as an option. Power front seats can be heated and feature integrated speakers for the iX’s stereo system.

Based on EPA estimates, the iX’s large 105.2-kWh battery pack can offer up to 324 miles of driving range per charge. When equipped with the standard 20-inch wheels, the iX’s ratings are 86 MPGe city and 87 MPGe highway. These figures are far from those of the R1S.

The iX offers to seat for five passengers. Seating and off-road capability is one area the R1S has an advantage over many vehicles. The BMW IX’s towing capacity ranges from 2100kg to 2500kg. 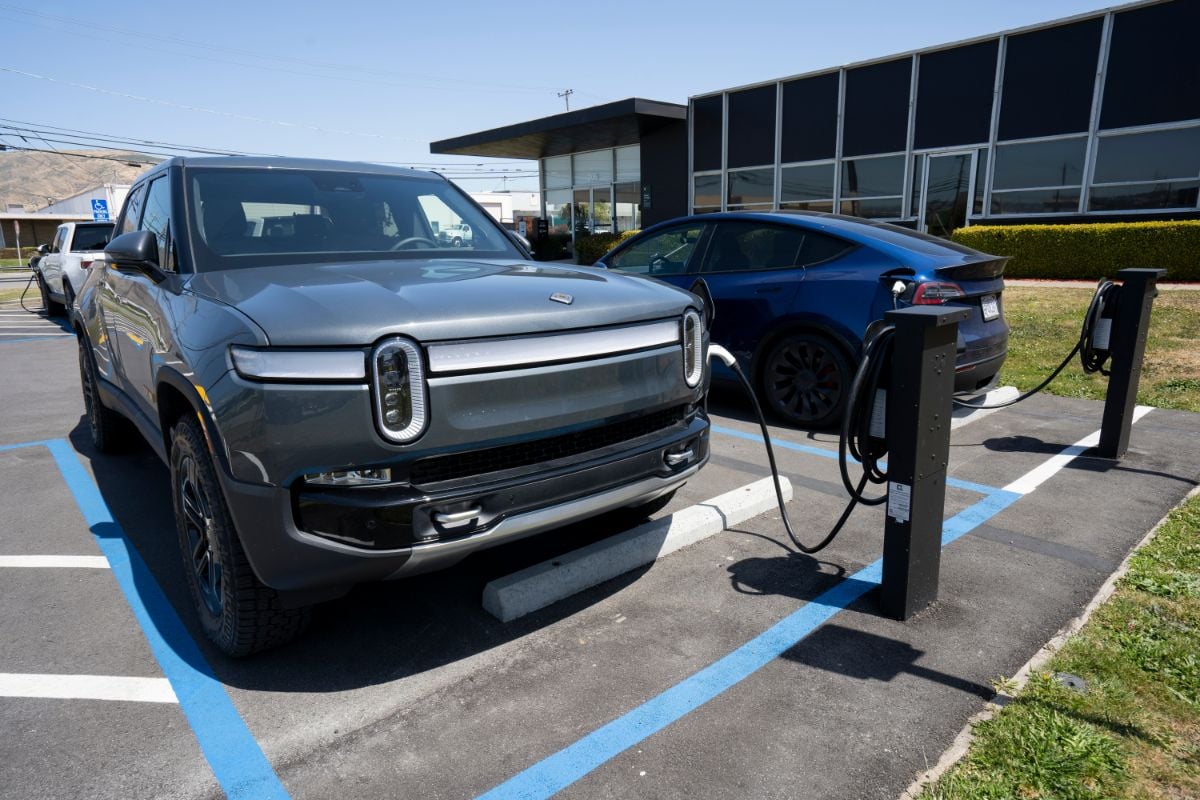 Whilst for reasons best known to themselves, for most, the Tesla Model X best typifies the R1S, for me, however, the car that speaks best to it is its stable mate-the Rivian R1T-duh! Though again, it is a truck and not an SUV.

Open the door, and you will find a beautifully designed cabin with contemporary styling, fancy leather, wood trim, and two large displays—one for infotainment and one for the driver’s gauge display. The Adventure also adds several desirable features, including a Meridian stereo system, heated and ventilated front seats, fancier upholstery, and wood interior trim.

Each wheel of the Rivian is powered by its electric motor. Just like the R1S, the R1T boasts up to 835 horsepower. As with the R1S, adjustable air suspension is standard and can adjust the clearance height from eight to 14 inches. Along with R1S-like all-wheel drive, the R1T Explore generates over 600 horsepower.

Like the R1S, the R1T also comes equipped with a 128.9-kWh “Large” battery pack. Its EPA-rated driving range of 314 miles-2 miles less than its R1S stable mate. EPA fuel economy ratings for the quad-motor R1T are 74 MPGe city, 66 MPGe highway, and 70 MPGe combined- close to those of the R1S.

Seating comes standard at five passengers, two fewer than on the R1S. Rivian informs us that every R1T can tow 11,000 pounds. The pickup offers a payload capacity of 1760 pounds- more than R1S in both respects. 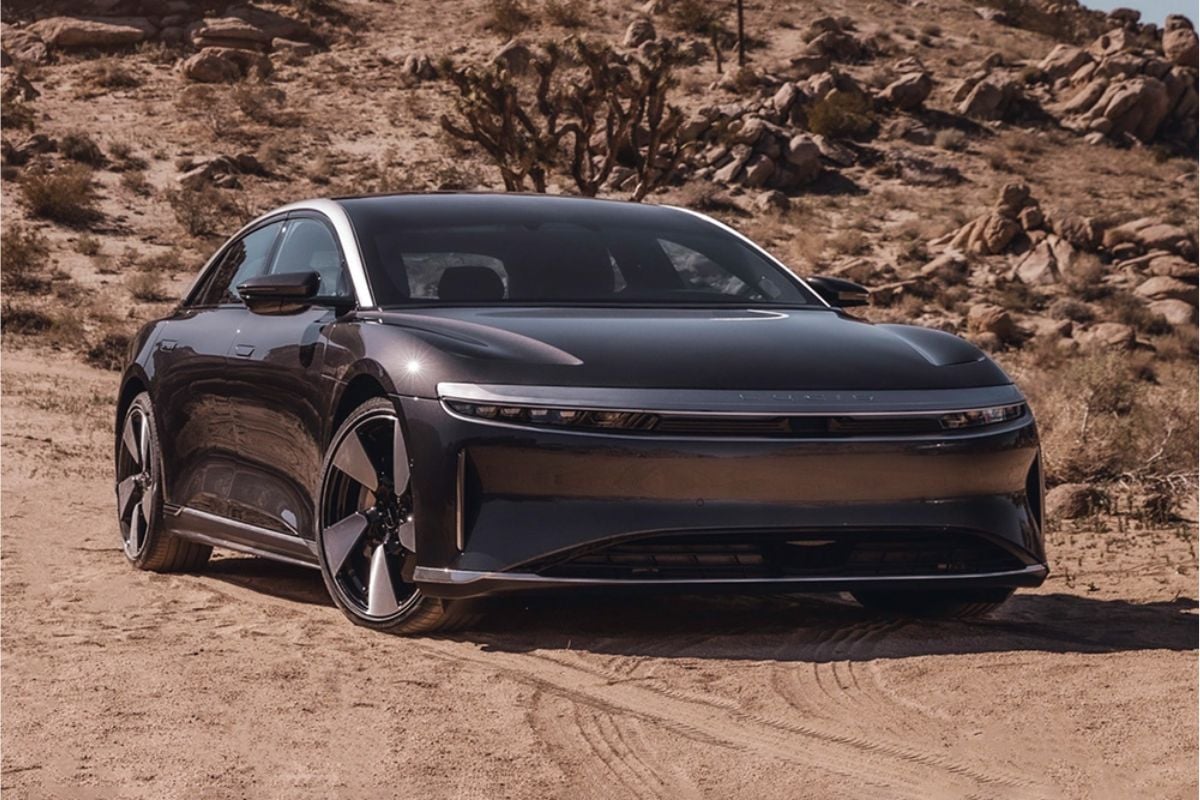 Just as the R1S is the product of the electric-vehicle upstart Rivian, the 2023 Lucid Air luxury sedan is also from the recently founded Lucid Motors. However, what I found striking about the two electric vehicles are their relatively odd features, but above all, their similar price range and humongous horse powers.

Inside, the Air adorns a posh cabin loaded with modern amenities. Almost all of the car’s controls are accessed through one of several display screens that dot the cabin. This is because the  Air is outfitted with sophisticated infotainment, a large upper touch screen, and a tablet-like lower touch screen that can be retracted into the dashboard.

Lucid reports that the system’s voice-recognition software will respond to natural speech patterns. The interface also comes with an assistant that learns the user’s preferred music and climate settings. Currently touted as the: “World’s longest electric driving range, spacious and modern cabin, blistering acceleration”, the  2023 Air comes with some big horses.

The entry-level Air, Pure model, features a single electric motor that drives the rear wheels and produces 480 horsepower. However, like the R1S, the rest of the lineup uses dual electric motors that provide all-wheel drive and a variety of horsepower ratings-some close to and others above that of the R1S. Notably, the Touring model generates 620 horses, while the Grand Touring makes 1050.

The top Grand Touring Performance model can gallop to 60 mph in just 2.6 seconds. Lucid Motors must be commended for creating one of the fastest, most powerful, and technologically advanced cars on the planet. Like the R1S, the Air’s base model, the Pure, starts at $90,000, while its apex model, the Grand Touring  Performance, will set you back some, $181,000.

The Air packs a 112.0-kWh battery that comes with DC fast-charging capability. Plugged into a fast charger, the sedan can reportedly recoup 300 miles of range in 21 minutes. According to EPA estimates, the 2023 Air has the longest range of any electric vehicle currently on the market.

With five-passenger seating, the 2023 Air cannot compare-or can it? While the standard rear seating is said to be comfortable for up to three adults, an Executive Rear Seating option adds a recline function for ultimate comfort. 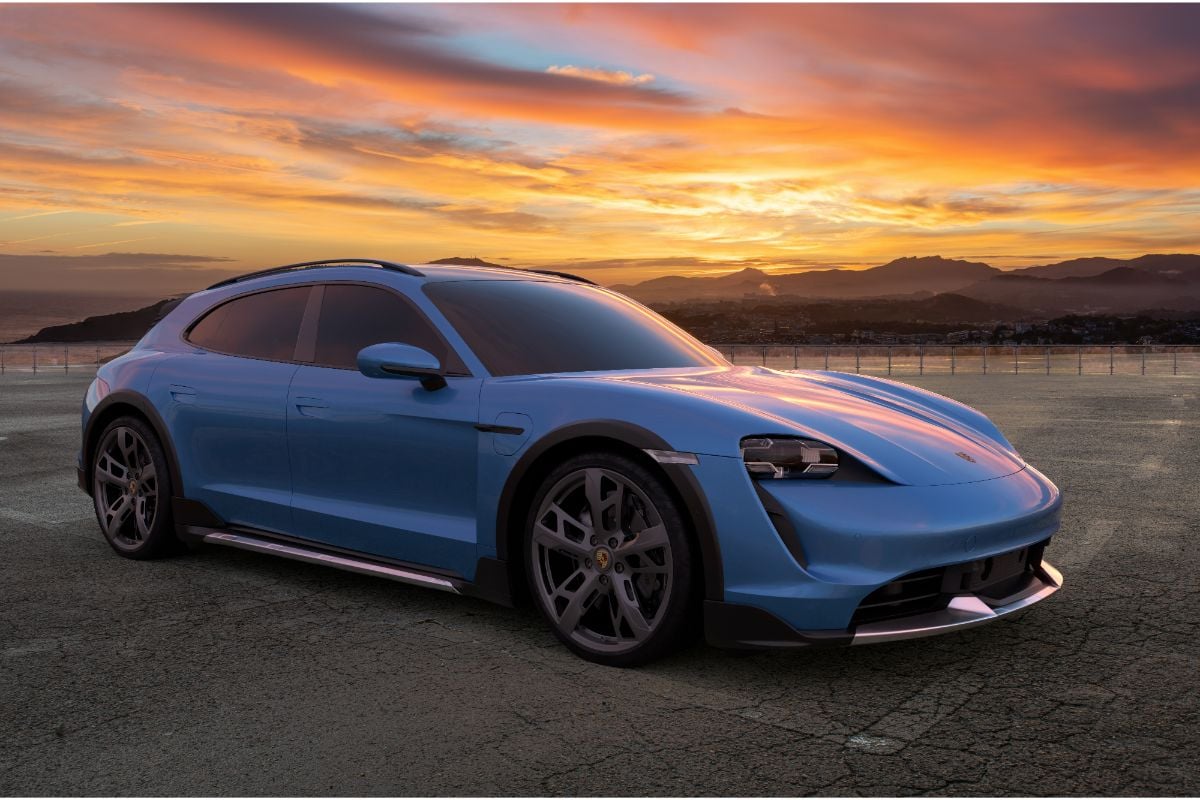 Aside from the above, and the fact that both the Taycan Cross Turismo and R1S are motivated exclusively by electricity, like the R1S, the Cross Turismo also comes standard with all-wheel drive and an adjustable air suspension.

Although not a bona vide SUV like the R1S,  available in 4, 4S, Turbo, and Turbo S trim levels, the Taycan Cross Turismo combines the comfort and usability of a wagon with the interior quality and soul-stirring performance of most SUVs.

Tech-wise, the Cross Turismo also competes favorably if not better. Notable is the remote-parking feature that gives it the ability to park itself without anyone behind the wheel-via smartphone. One other interesting thing about this Taycan is its two-speed transmission on the rear axle, a first for an EV.

At  60 mph in 3.5 seconds the Sport Turismo, still does, however, and trumps the R1S on acceleration. You can drive the base Cross Turismo 4 for $91,000-the same price as the R1S. Though the Cross Turismo climbs to as much as $189,000 for the Turbo S. The price range is both at par and beyond that of the R1S. 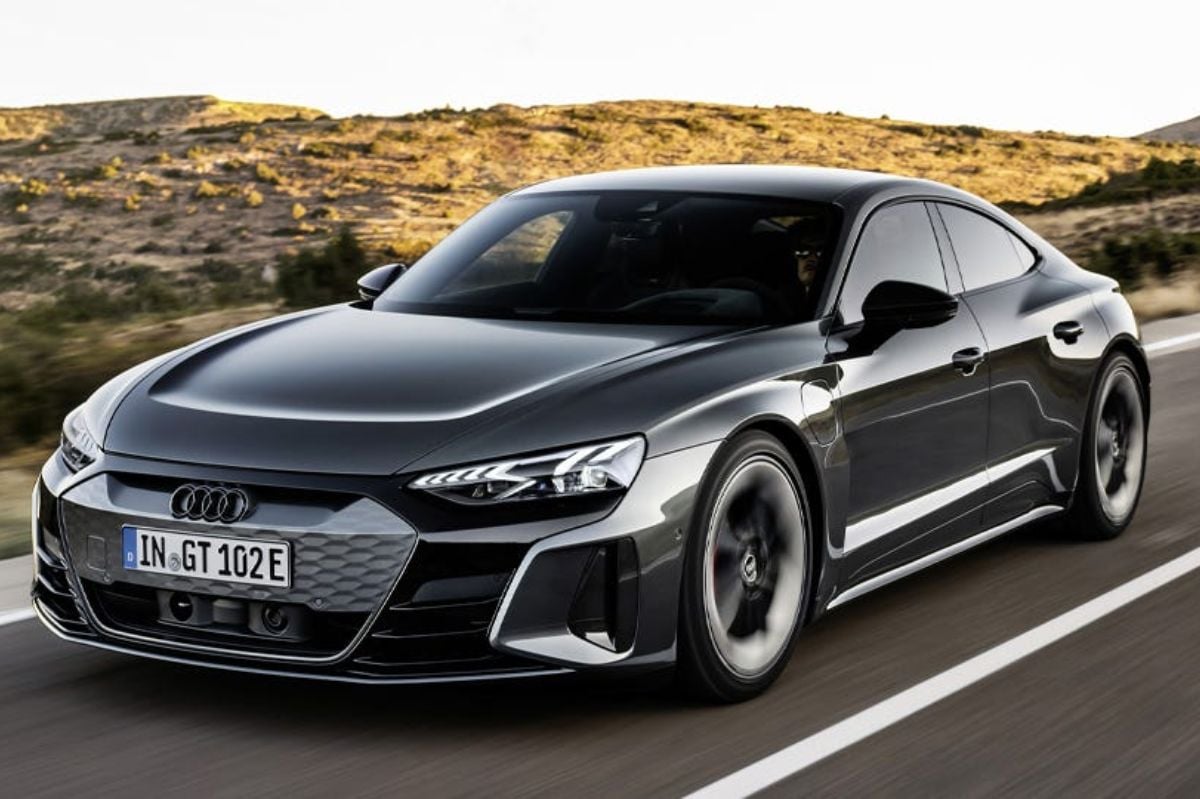 Like the Rivian R1S, this also bold-looking electric car bears some similarities.  Similar to the R1S, the e-Tron GT is all-new for 2022 and is the latest all-electric model in Audi’s EV lineup. It could be just me, but the Audi e-Tron GT has an equally peculiar front grille like that of the R1S.

Inside, the e-Tron is just as elegant and technologically advanced. High-end materials beautify the interior, as do high-tech features.

An innovative two-speed transmission enables the RS e-Tron GT breathtaking take-offs of 0-60mph between  2.9  for the RS and 3.9 seconds for the regular. Both accelerations are notably 0.3 and 0.7 of a second faster and slower than the R1S.

Like the R1S, the e-Tron GT is also available with all-wheel steering and adjustable air suspension. Depending on the model, the dual electric motor assisted e-Tron GT produces between 522 and 637 horsepower-the regular e-Tron GT generates up to 522 horsepower while the RS version peaks at 637 ponies. The former model is the closest to the R1S the e-Tron will get.

The entry-level Premium Plus can be yours for $104,000, while the high-end RS will set you back about $144,000. The R1S is less expensive than this Audi’s trim levels. Unlike the R1S, the e-Tron GT comes with seating for five and four doors.

Beneath the hood of every e-Tron, the GT features an 85.0-kWh lithium-ion battery. A complex cooling system means its battery pack can handle repeated runs without the typical signs of heat-related degradation.

Both are significantly more efficient than the R1S. In case the list above is still not exhaustive enough for you, you might also investigate the following electric vehicles similar to the R1S which, time permitting, I would have loved to discuss.:

In the meantime, below are some frequently asked questions relating to the R1S you might be interested in too. 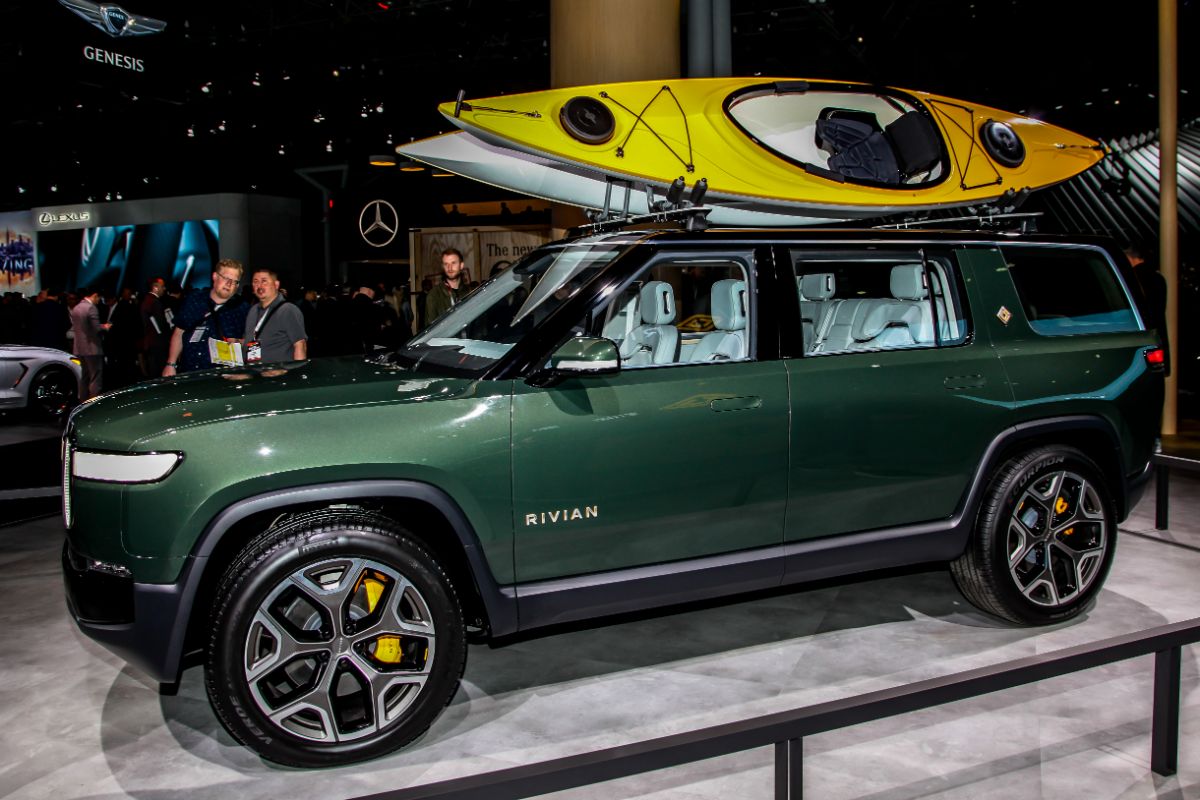 Customers can have the R1S in different drivetrain and battery configurations. There are three variants; Launch Edition, Explore, and Adventure. Here’s everything we know about the Rivian R1S.

The vehicle’s total cargo volume with the seats unfolded is ft3.

3. How many reservations does Rivian have for R1S?

Rivian reported over 90,000 reservations are now on the books for its R1-series vehicles, up from 83,000 in March. Notably, 10,000 new reservations were recorded after the controversial price hike, with an average purchase price of $93,000.

4. How fast does the Rivian R1S charge?

The first Level 3 DC fast charging site, which opened Monday in Salida, Colorado, has four chargers that can provide more than 200 kilowatts of power, according to Rivian. This allows Rivian R1T drivers (and eventually R1S SUV drivers) to add as much as 140 miles a range in 20 minutes, the company said.