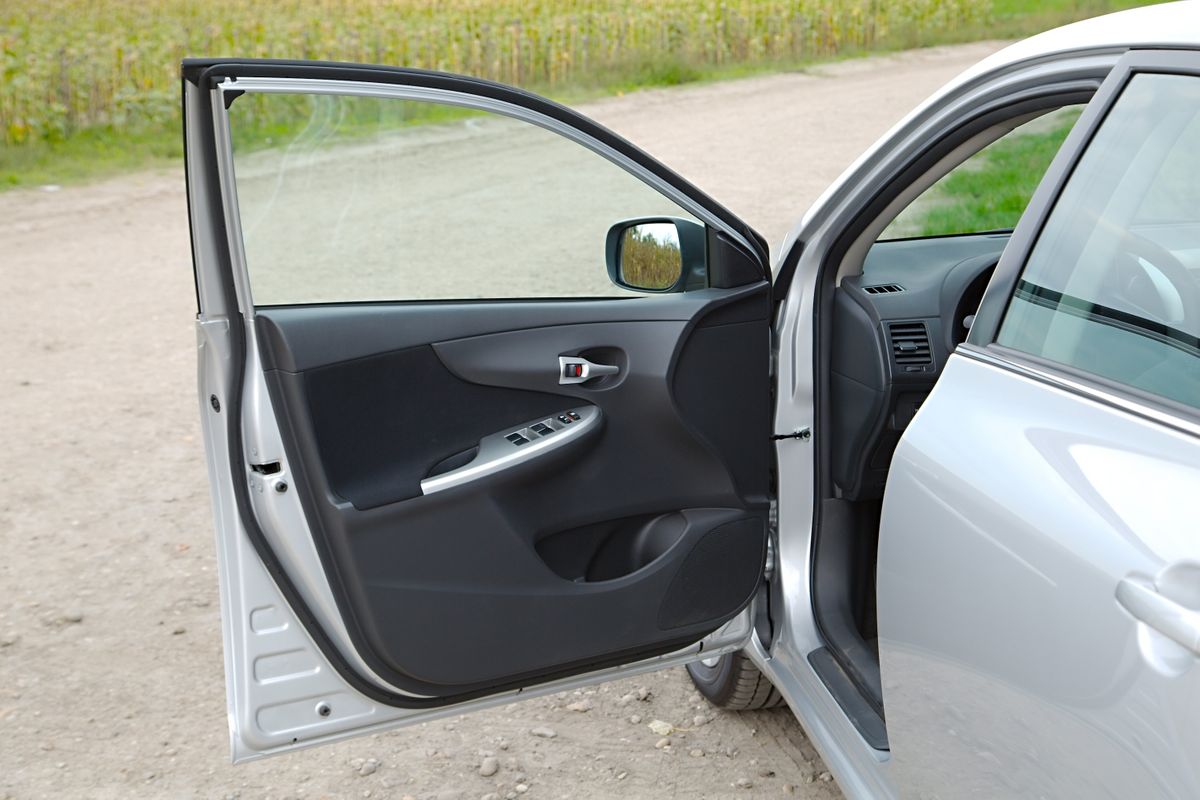 A vehicle’s doors impact both the mechanics of using a vehicle and its aesthetic appeal. The number of viable door modifications will depend on the model of your vehicle, with some options only being available if you purchase a vehicle designed for them. This list covers a wide range of car door options to familiarize you with each just enough to know what vehicle and aftermarket manufacturers are trying to sell you. 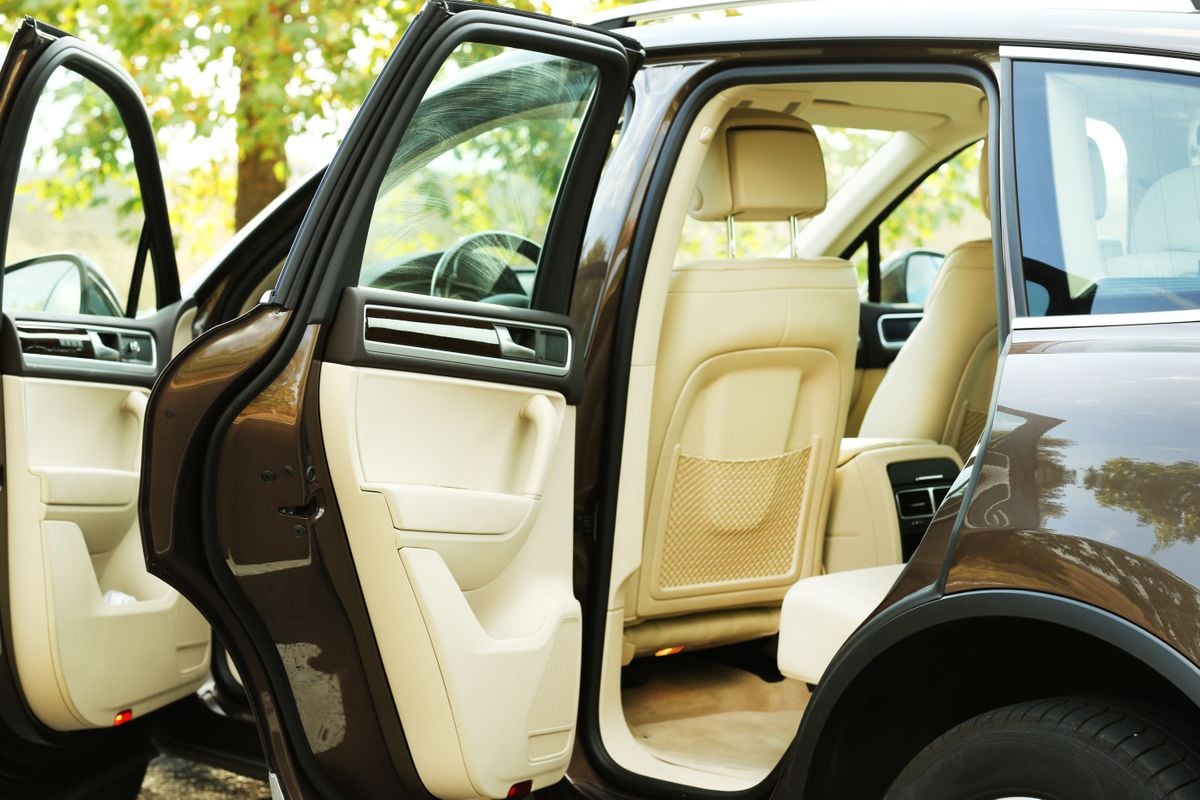 Typical car doors have hinges towards the front of the car and swing out to the sides to open. This basic design works well for passengers entering and exiting a vehicle, and the physics of driving forward help keep the doors shut if a latch fails at high speed. They are usually listed as normal or conventional car doors, if the company bothers to list the type of door at all.

The commonality of conventional doors is their largest downside for car enthusiasts who want a unique vehicle that represents their tastes. Since they come standard on most vehicles, they are the least expensive option, and everyone knows how to use them. 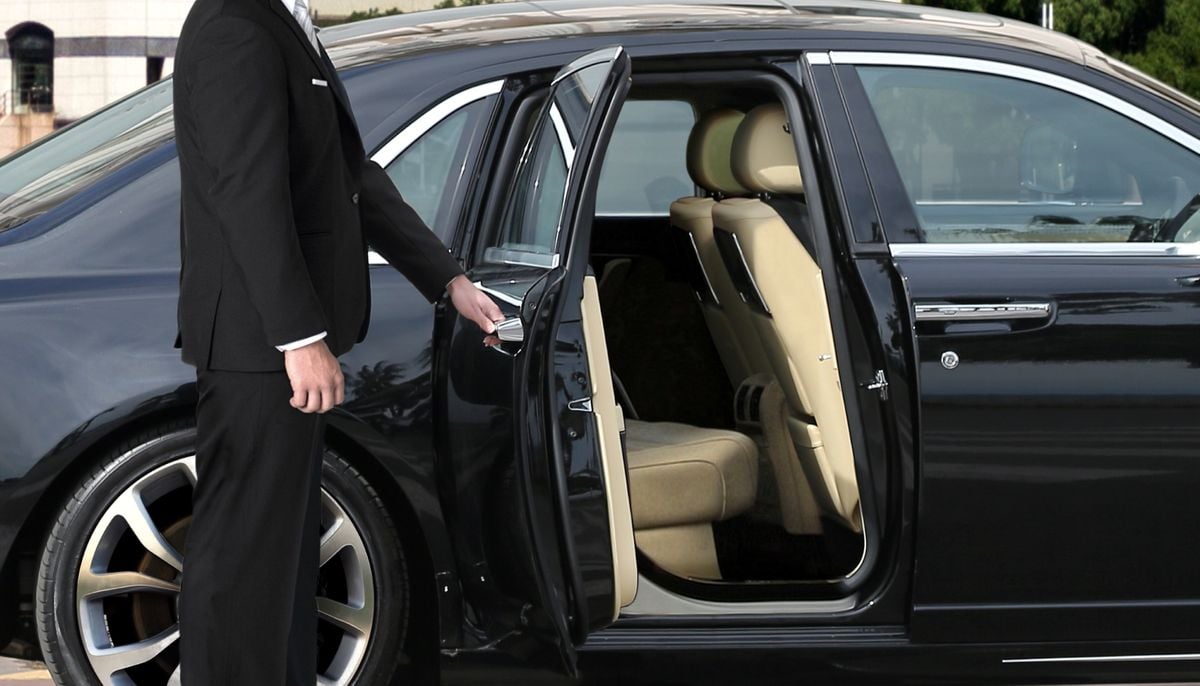 Popularly known by different names, such as coach doors or flex doors, the reversed placement of the hinges causes the door to open towards the trunk instead of the bonnet. Since an open rear-hinged door can act like a metal net that catches pedestrians and objects, they present an additional safety hazard if their latching mechanisms fail.

Crew cab trucks with a minimal second row will frequently have a rear-hinged door for the back row to avoid placing a support strut down the split. The moving edge of the rear-hinged door latches with the conventional front-hinged door when shut. It’s easy to tell when it fails to shut, but there is a risk of hands being caught between the two doors as they close.

The safety risks don’t show themselves every day, but they are consistent enough that front-hinged doors have won out as the go-to option. 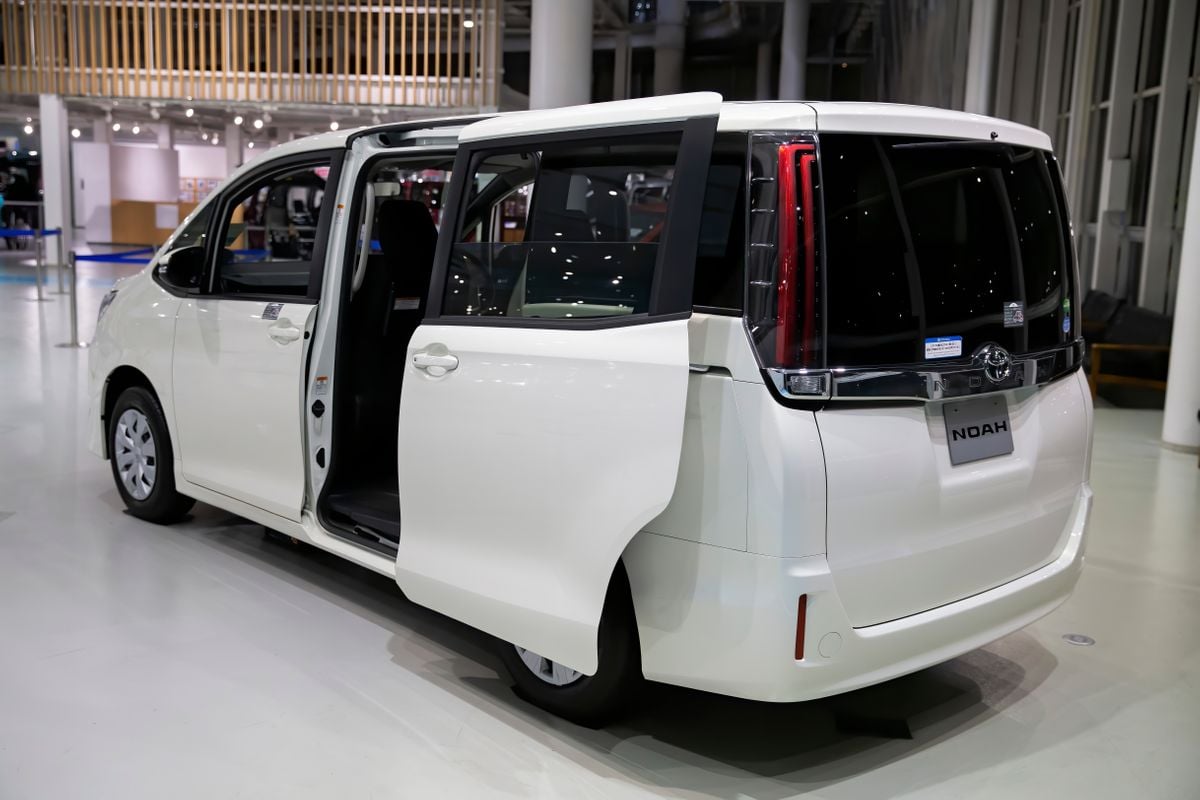 The wide opening of a sliding door creates a larger portal for passengers and cargo. They aren’t the most elegant door design, but their functionality is hard to beat. Vans and other long vehicles with large bodies will frequently use sliding doors instead of hinged doors, but the occasional short vehicle might have a sliding door that extends slightly past the trunk when fully opened.

Sliding doors are usually located on the sides of the vehicle, which presents engineering problems for less blocky vehicles trying to use them. While not too difficult to engineer, sliding doors require more support and reinforcement to meet side impact safety standards. If you put aftermarket sliding doors on a vehicle not meant for them, you should be absolutely sure you know what you’re doing.

You can grab a kit to swap from a manual sliding door to an automatic one without much work, though.

Since vehicles with sliding doors are frequently used commercially, here are a final few words of warning. Be careful when putting advertisements across a sliding door, as the letters might shift in unexpected and potentially embarrassing ways. 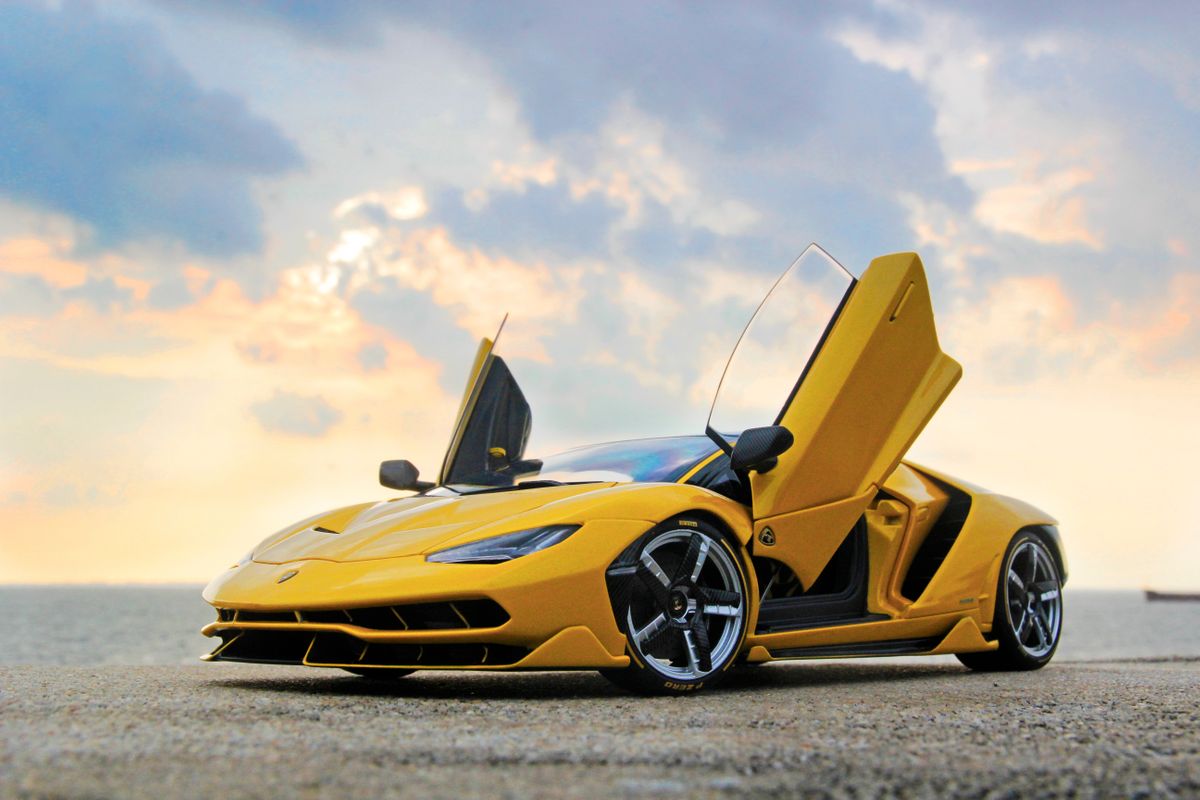 While scissor doors have seen limited use in concept cars, Lamborghini has been the driving force behind their usage in production line vehicles since the original Countach was released in 1971. The sheer vertical opening of the doors eliminates the need for horizontal clearance.

The functionality of scissor doors is questionable if they don’t rise enough to keep the door out of the way. Occupants may have the approach from the wider opening to slip inside, which is mildly inconvenient but not so awful that it makes them unusable. They will open even if you park against an obstruction, which is a helpful feature when the available parking spots are in cramped parking garages or alleyways. 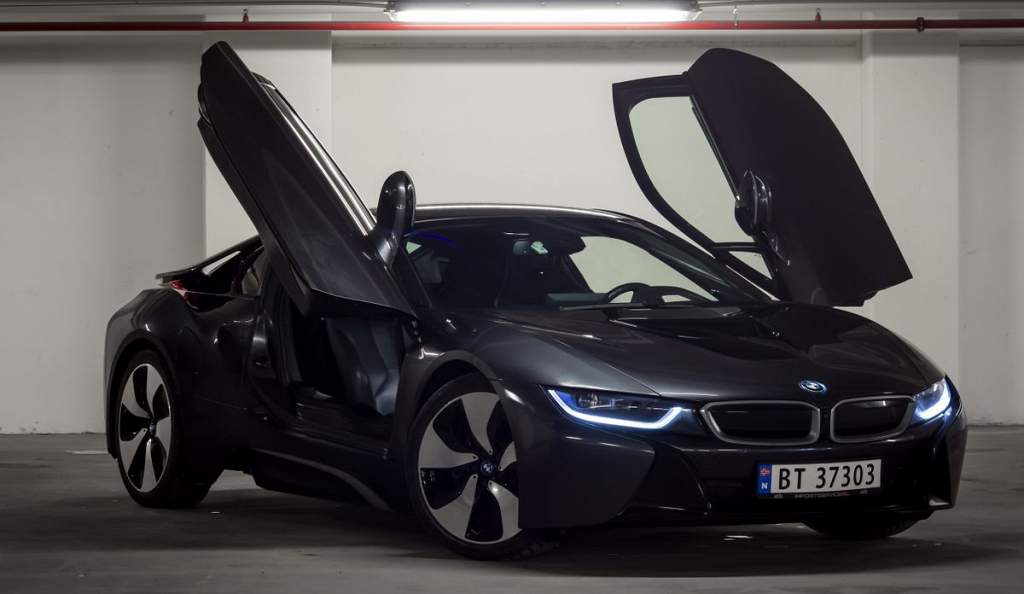 While easy to mistake for scissor doors, butterfly doors include a slightly outward opening to start before rising vertically, while the scissor doors only need vertical space to open. That little bit of extra opening really helps with getting into and out of the vehicle without having to twist and turn.

The hinges are minimally different from the ones used on scissor doors, but the installation difficulty and number of moving parts is otherwise equivalent to scissor doors. If you’re stuck deciding between the two, you’ll have to consider cost and appearance to make a final choice. 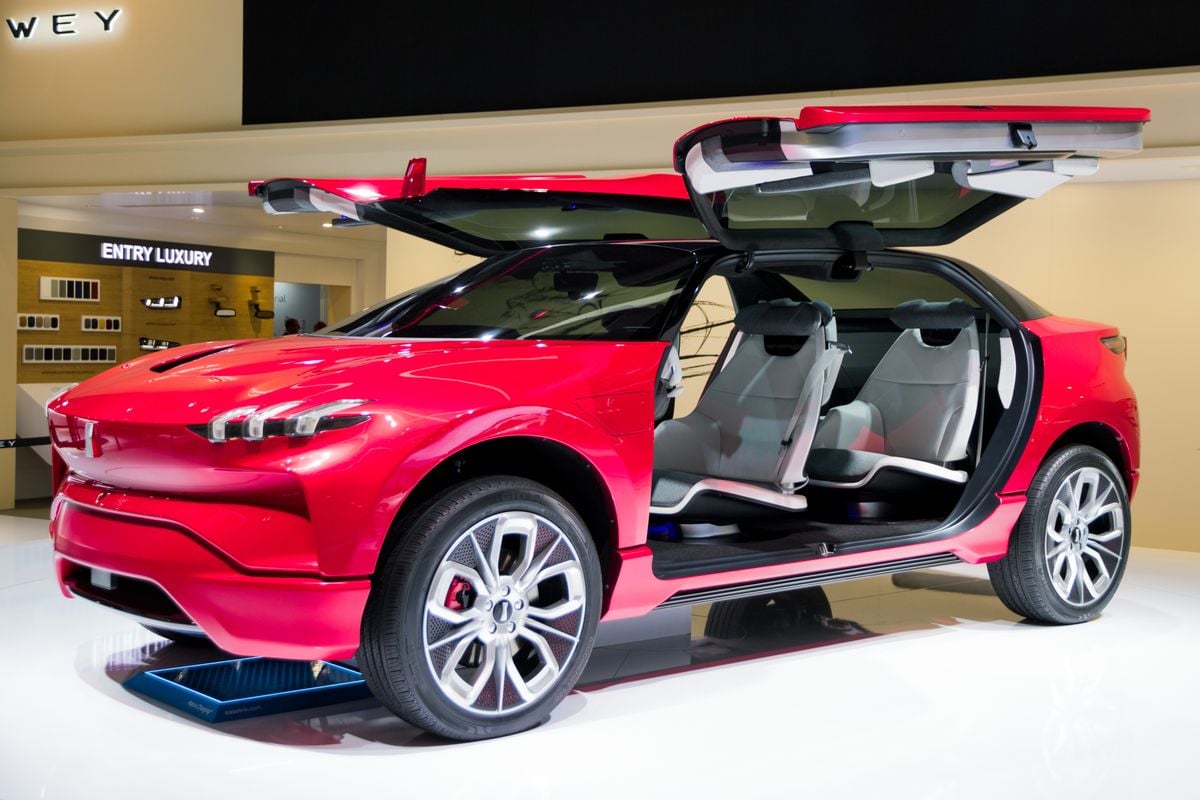 The DMC DeLorean with its gullwing doors is arguably the true star of the Back to the Future series. A portion of the roof is sacrificed for these doors to give easy access to the seat even with a short vehicle design. Gullwing doors have a few critical design challenges, such as complying with rollover regulations, that keep them from widespread use.

The best models and conversion kits have additional mechanical parts that increase the cost and potential points of failure.

The continued rarity and association with concept vehicles makes them a stand-out feature when available, like on the Tesla Model X. If you are dedicated to the idea of having them on your vehicle, be prepared for a large amount of work and major modifications to your vehicle. 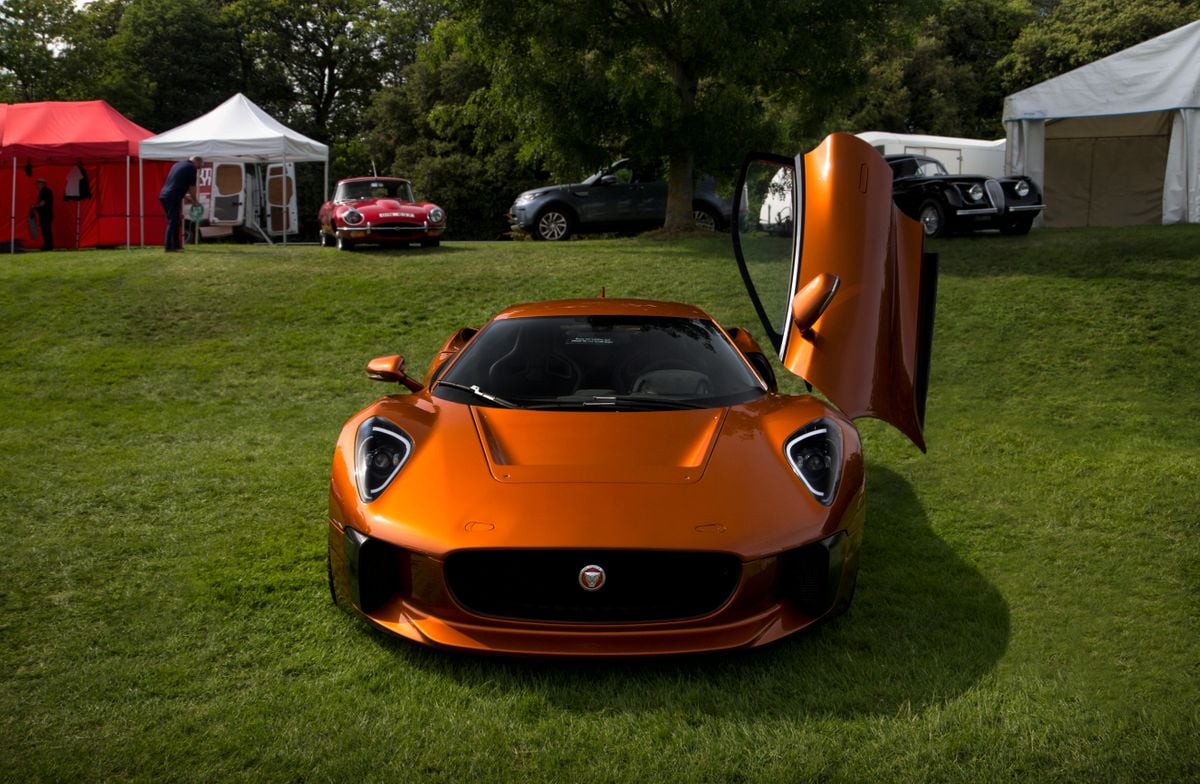 Like its namesake, these doors gracefully swing outwards and slightly upwards when opening. The degree of outward movement gives more clearance room for entry and exit, but it takes more horizontal clearance to open compared to butterfly doors. To see swan doors on a production model, look at some of Aston Martin’s lineup, such as the Vantage or Vulcan.

Unlike butterfly doors, the minimal upward angle of swan doors is shallow enough that additional support mechanisms aren’t needed. A savvy mechanic with a full shop could possibly pull it off by rearranging the hinge placement with the parts they have on hand.

If your vehicle is low to the ground, the vertical tilt could help you avoid a few scratches. The change is subtle enough that the amount of effort is not worth it if you’re trying to stand out at a car show. 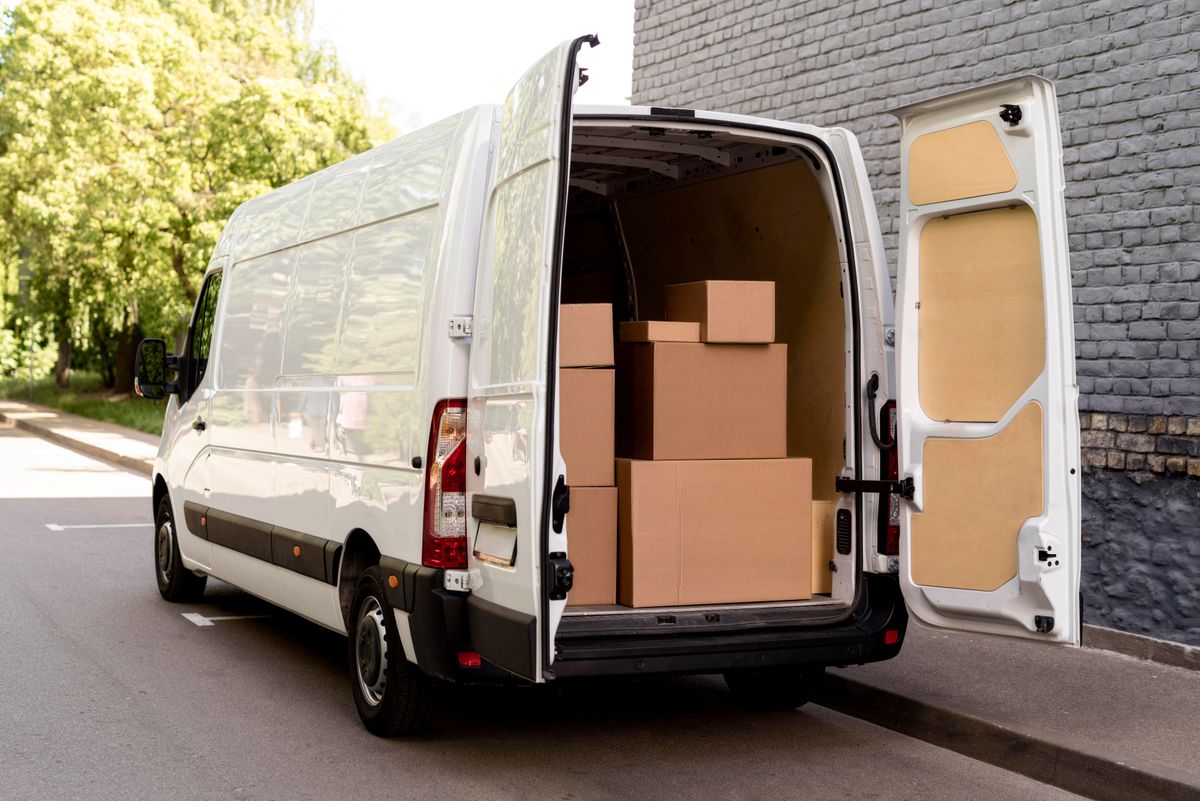 Like sliding doors, rear cargo doors are a more common sight on vans, SUVs, and other large vehicles. Some are similar to conventional car doors and have a set of hinges on one side. Others feature two doors that open at the center, especially on larger commercial vans.

Sliding doors are uncommon, as they’d have to extend into adjacent spaces without additional engineering. 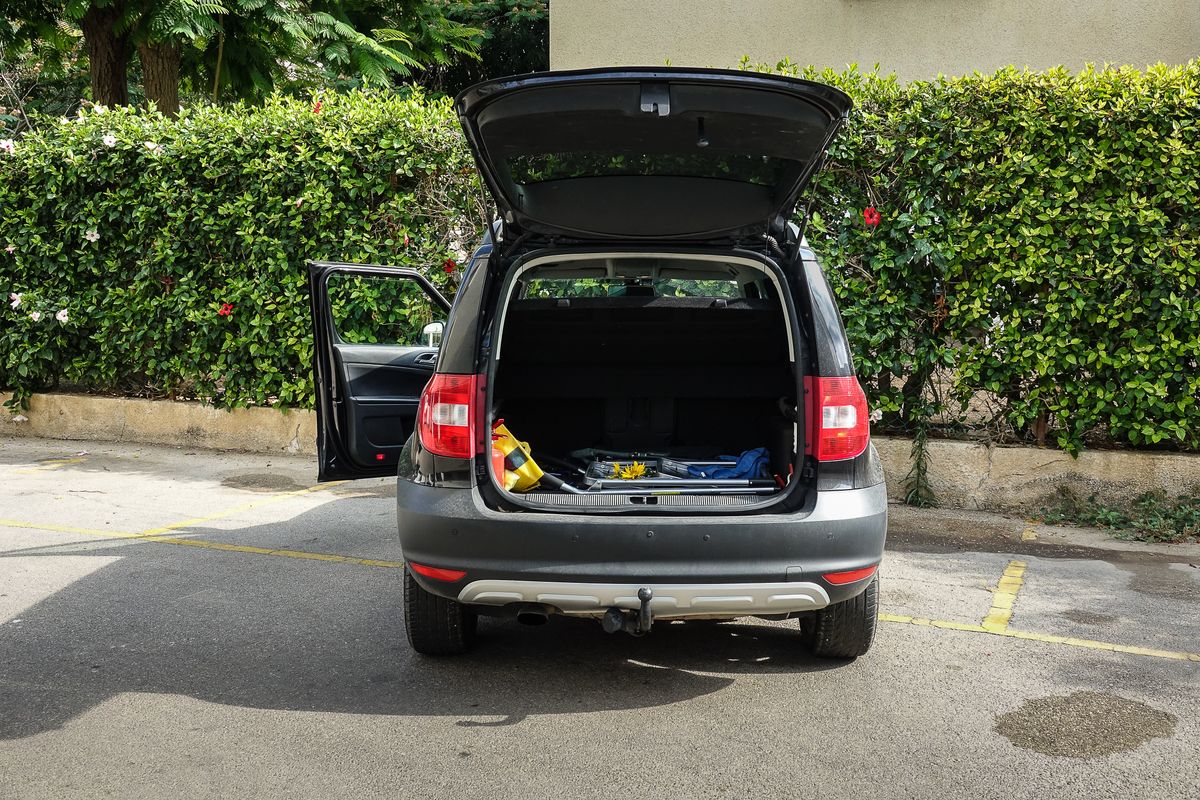 Hatch doors are a common type of rear cargo door notable for their upward opening motion. Because the opening can include portions of the roof, it provides a wider opening for smaller vehicles. Keeping the door up and out of the way also helps when moving cargo into and out of the vehicle.

Like other doors that open upwards, hatch doors present problems when the mechanisms that keep them in place start to fail. Otherwise, their functionality has seen use on vehicles of every size and become the namesake for an entire family of cars – the hatchbacks.

The mouthful of a name simply means that the doors rotate as they open slightly outwards. When fully open, the doors stand poised like shields extending to other sides. Like butterfly doors, they require minimal horizontal clearance, and the rotation moves the door out of the way to create a bigger opening.

Despite being immensely futuristic and eye-catching, raptor doors add much more complexity to the door mechanisms for no substantial functional benefits over some of the alternatives. Those extra parts mean the doors might have issues with opening and closing from minimal damage or simple wear and tear with greater frequency. 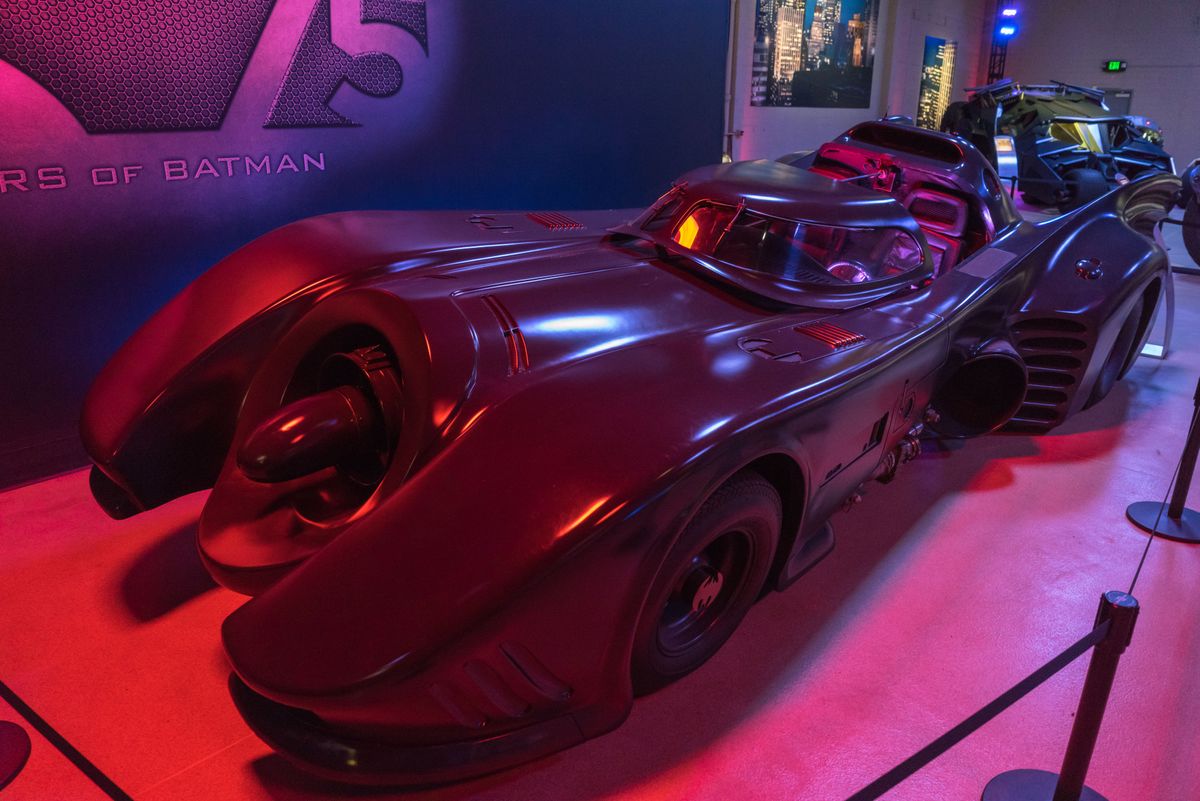 Why stop at opening one part of the vehicle when you can open the whole canopy? Lifting or sliding the roof out of the way allows access to the interior of nearly any vehicle design. While a canopy door allows engineering options like exceptionally wide windshields for a full field of view, it’s not convenient to use and has major rollover safety concerns.

Many Batmobile models feature a canopy roof, but few real world cars have had them.

Canopy roofs are common on airplanes since the field of view is so important. The downsides are mitigated when someone is usually helping the pilots get into and out of the cockpit, and having to break open the canopy after a rollover in an airplane would be a welcome miracle.

These disappearing doors are more novelty than actuality, but the clever way the doors roll down and out of sight is spectacular to watch. No opening method offers as much space as removing the door entirely.

Unfortunately, existing models require more modifications than gullwing doors and more parts than a motorized sliding door. They also have safety issues present in both of those types with side impact and rollover concerns. Don’t be surprised if you see these in a concept vehicle from time to time, but widespread adoption seems far off at best.

Is It Hard to Switch Out Car Door Types?

Switching out a car door with the same model can be done with minimal knowledge and tools. Changing the type of door entirely will likely involve permanent modifications to the vehicle, such as drilling holes or cutting into the body. More complex doors have additional mechanical parts that have to be installed correctly.

Failure to do so can make the door difficult to open or close, adding to the risk of injury for occupants and nearby people.

Some specific types of car door and vehicle body combinations simply do not work. For example, it is hard to add a rear cargo door to a sports car.

How Much Does It Cost to Switch a Vehicle’s Door Type?

The cost will vary depending on the type of door, the cost of the door itself, the cost of the tools and kit to install it, and any labor costs. Unfortunately, it is hard to give a succinct answer due to the number of factors involved.

For example, a universal butterfly door kit will cost at least $200, while better kits intended for specific vehicles can cost thousands of dollars. This vendor’s Jaguar F-Type conversion kit retails for $4,200. For more expensive cars, the full cost of parts and labor can push over $10,000 with no real upper bound if you make extreme modifications.

The change may also impact your insurance bill, further increasing the actual cost over time.

Is It Legal to Change a Car’s Door Type?

In the USA, vehicle modifications are covered by a mixture of federal regulations and state laws. Even if no direct law prohibits the intended door modification, it needs to be properly installed and may be deemed undrivable if it presents an obvious hazard. Other countries tend to have similar laws.

Refine your search to look for aftermarket vehicle modification laws within your local area, and don’t be afraid to ask a government official, lawyer, or long-serving mechanic in your area if you can’t find an answer online.

Changing the type of door can increase the risk of injury or death, even if the kit is properly installed. Factors like how a vehicle’s doors open are included in assessments by safety organizations, and they or traffic control officers may determine that the modification is unsafe. If no inspections are required, it will be up to you to ensure that you have selected and installed parts in a way that complies with safety regulations.