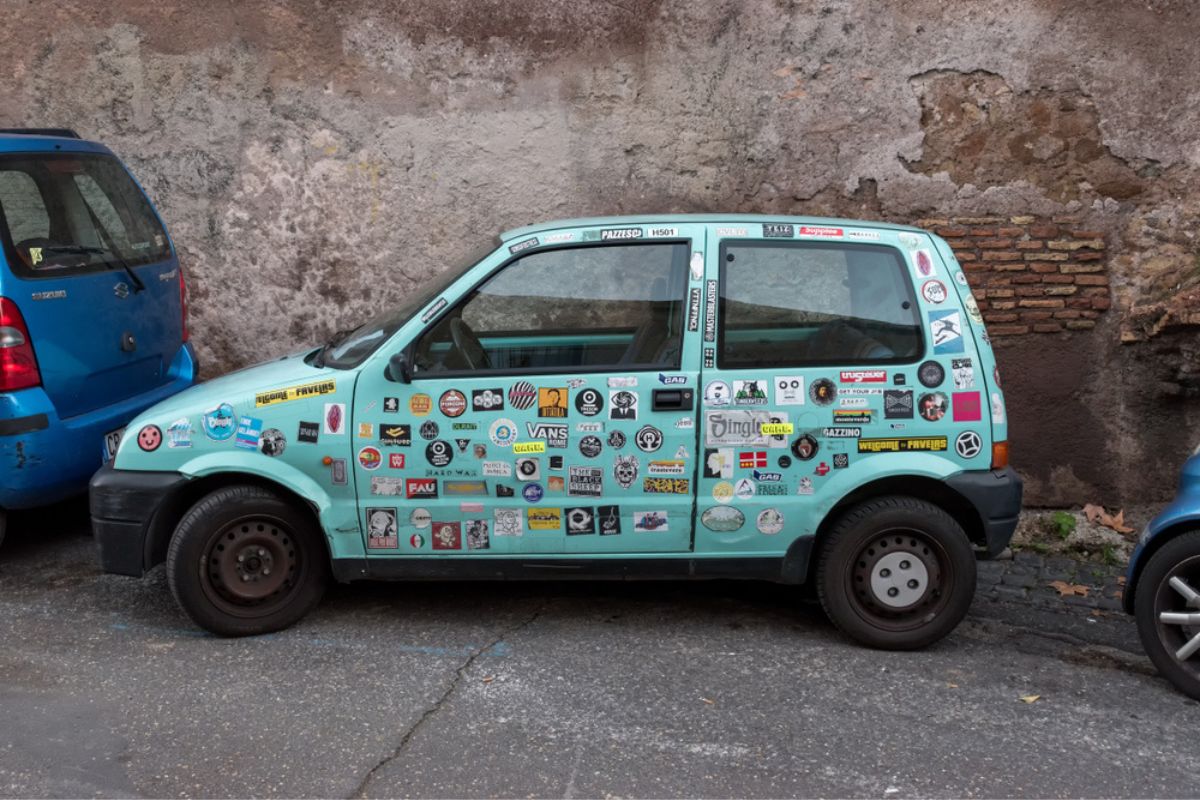 For some reason, you don’t see cars with bumper stickers the way you used to. Years ago, it was common to see at least one bumper sticker or decal on most cars on the road. Every once in a while, you would come across a car that looked as if it fell in a vat of stickers.

I haven’t seen anything like that in so long. Where have all the stickers gone? Did everyone start finding other ways to show their personality through their vehicle?

Perhaps the interior? Well, it’s not quite that dramatic. There are still stickers on cars, the volume has just diminished.

The lessening might have something to do with the belief that a decal on the car will ruin the paint. But does it?

Contents Show
What is a decal?
How the Quality of Paint Impacts Decals
Can stickers damage car paint?
What’s the best kind of car sticker?
Do stickers or decals devalue a car?
Use Sticker Tact
How to Remove Sticker Residue

What is a decal? 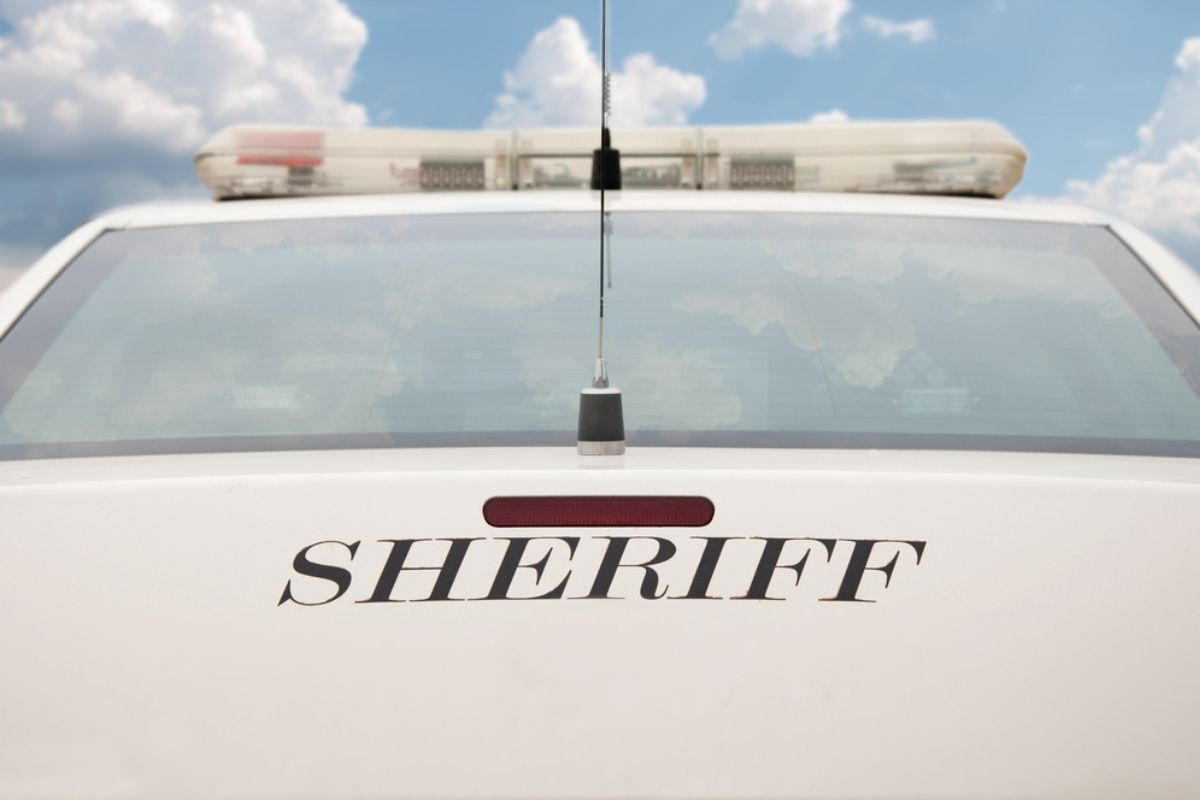 Before we get to it, let’s go over a couple of mentioned keywords. There are decals and stickers. Decals are designs that transfer onto a surface. usually glass or metal.

You often see one on a back windshield or on the side of a vehicle, wherever it makes the most sense. They have a clear background and can also just be a logo. Stickers are adhesive with a design on the front and a sticky cling on the back that can go onto any surface.

These are typically full color and can leave a residue when pulled off.

How the Quality of Paint Impacts Decals 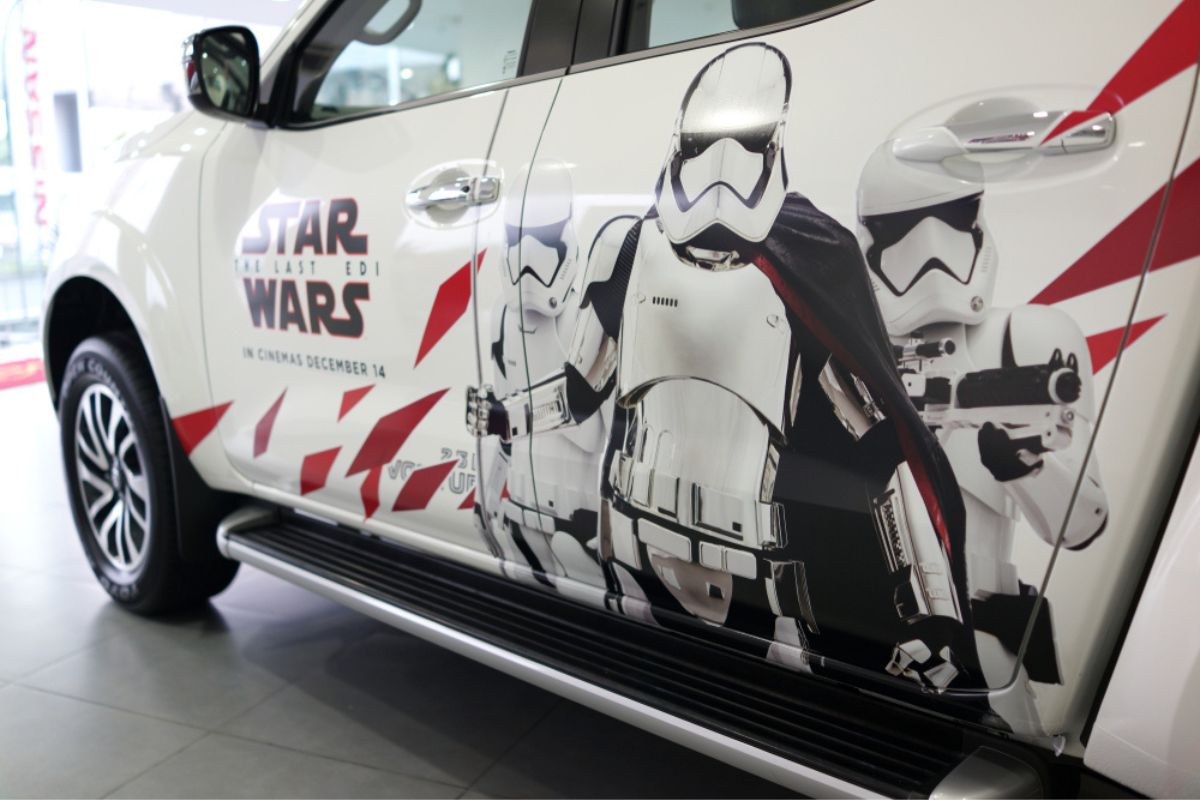 You can all breathe a sigh of relief, decals don’t chip paint or cause streaks on a car. Flow Racers explain, “Unless the paint is of very poor quality. They will however do the opposite, preserving the paint underneath, and thus when they are taken off, they can leave the car with patches of shiny paint, while the rest has borne the effects of the weather.”

So when you think about it, the places where decals were are the best parts of the paint, when accounting for wear and tear. It’s kind of like getting a carpet professionally cleaned and putting furniture back in place. Months later, you move the furniture and can see the difference.

If you’re trying to remove a decal, the best way is through a heat source. Get the decal really hot in the center and then move to the edges for a few minutes. At that point, you should be able to lift the edges ever so slightly.

Pull up the corners until you get enough grip to remove the entire piece.

Bumper stickers won’t really hurt a car either, but you have to be more careful. If you’ve ever tried to pull a UPC code sticker off literally any surface, you find out quickly that it may not provide you with the desired results. If I had a nickel for every time there were remnants left by a sticker on something, I’d be very rich.

The best way to remove a bumper sticker off a car without causing any harm is to do so under heat. So, either wait until summer or get an extension cord for a hair dryer. After a few minutes of hot heat directly on the sticker, it should pull off without leaving a trail or taking the paint with it. 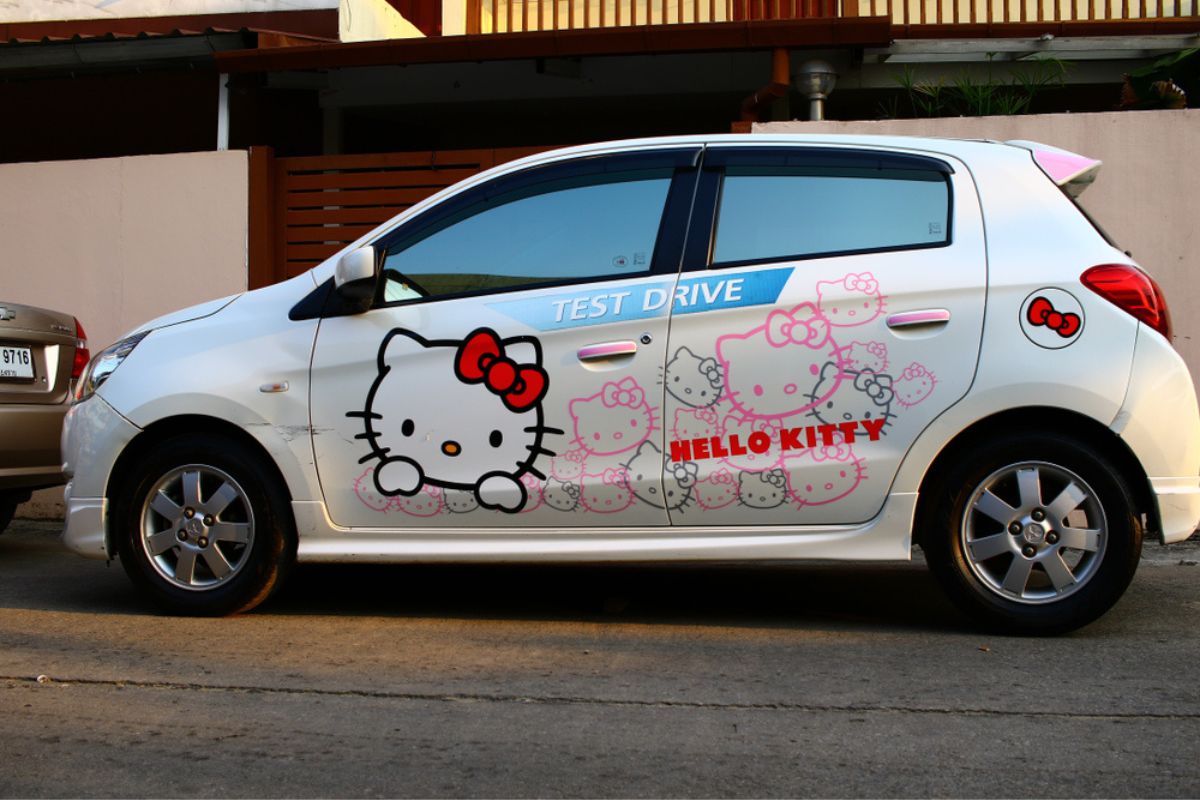 In my experience, you can’t go wrong with car magnets. They look like stickers but you just slap them on your vehicle. Magnet stickers stay on forever and come off pretty smoothly.

Depending on how long the magnet is on your vehicle, you might have to peel it off. That’s only because dirt has helped to solidify its place on your trunk. The only downside is that these types of stickers can be easily stolen.

Taking a decal off a window would expel a lot of energy. That’s the type of energy that would not make sense since it might not adhere to another surface. Trying to remove a sticker would likely damage the sticker in the process.

Magnets can just be pulled off, leaving only a dirt ring clue. In fact, one time I was in the mall for a very short window of time when my car was vandalized. A very unhappy person took my OBX (Outerbanks, NC) sticker magnet and ripped it into pieces, leaving them on my hood.

Do stickers or decals devalue a car? 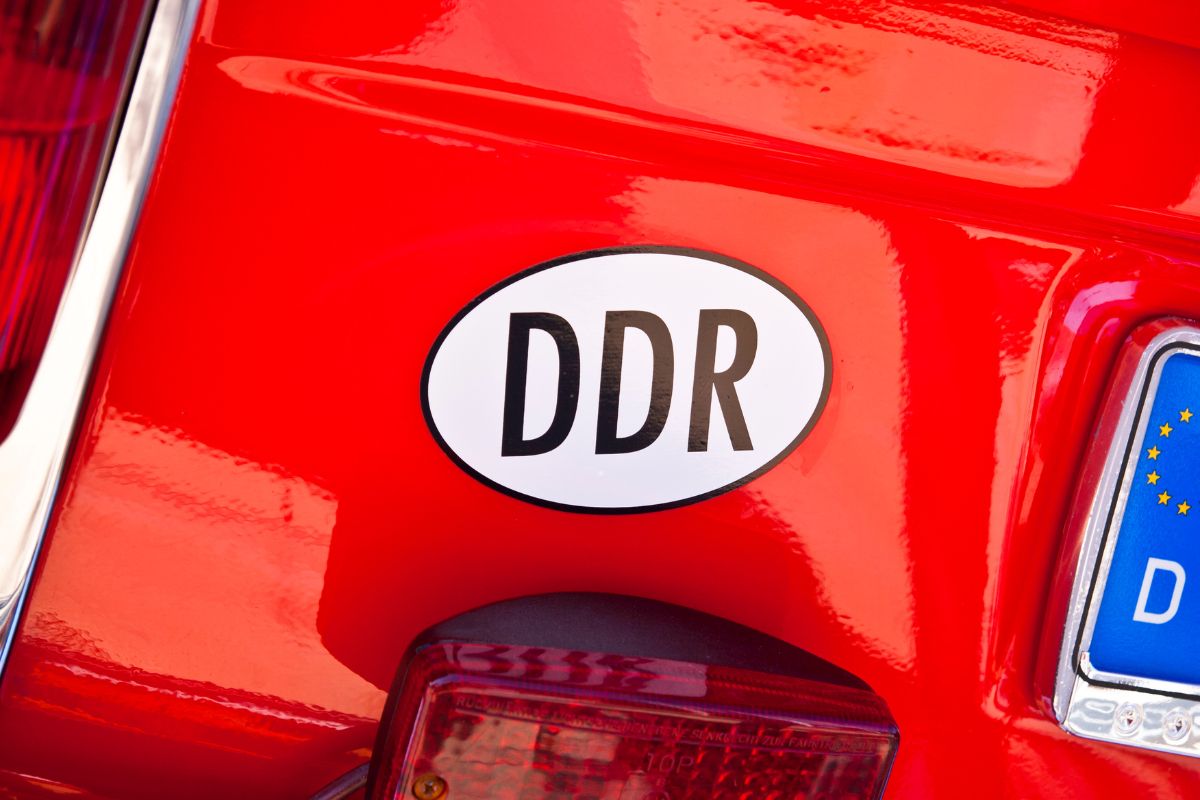 I hate to say it because I don’t want to be responsible for diminishing anyone’s creative juices, but yes. That probably has a lot to do with why the trend is on a decline. Many cars purchased aren’t kept forever and no one wants to deal with the hassle of removing stickers or running a risk of damaging paint.

Even though it’s likely no damage will come from having anything on the car itself, the idea is to keep cars looking as pristine as possible for as long as possible. Cars that drive around being soaked in stickers and decals are probably not the cars that were ever going to hit top dollar on trade-in anyway. It’s sort of the same concept as selling a house.

The preferred method of showing a home is empty, so prospective buyers can picture their stuff in the home. Either that or the home will be staged with extreme neutrals and no personal items. The more personal a house or car is, the more cluttered it is to someone who might potentially be interested.

That’s a personal buyer or a dealership. If you’re trying to sell your car, clean it up inside and out before getting evaluated. 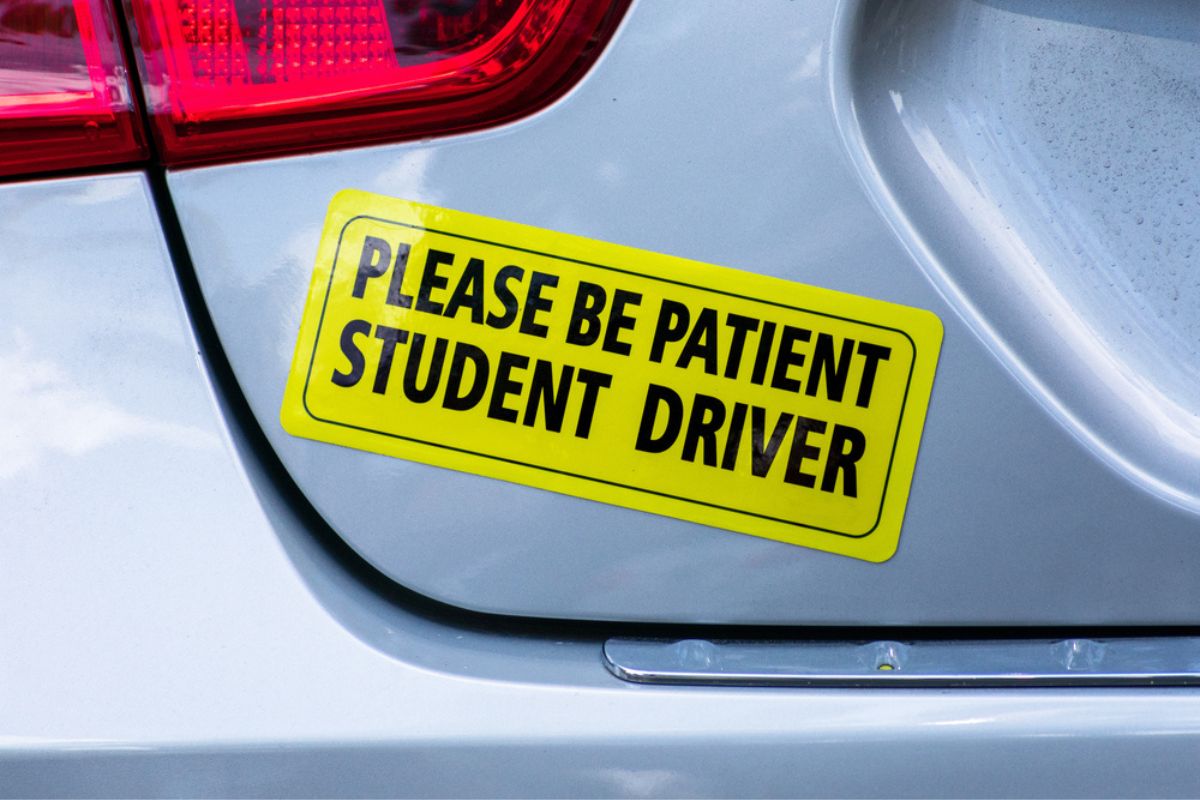 You couldn’t have convinced a 14-year-old me that you have to be careful with stickers or decals. My mother was way ahead of the no bumper sticker trend back when it was still trendy to have several. She didn’t want anything inside or outside of her brand-new minivan.

Well, when I went to visit my future high school, I was given a bumper sticker for school pride. When she told me she would not be putting it on the car, I wasn’t sure my feelings would ever recover. As an adult, I get it.

That sticker was the type that would have taken extra effort to remove. Not only that, it was long, rectangular, and stuck out like a sore thumb. She didn’t try to explain, but at least I will be able to handle the situation better if I end up in it one day.

So, if you don’t want your feelings to get hurt, don’t give anyone a sticker unless it’s a magnet. At least with that type of sticker, they can pretend they’re going to use it and take it off later if they really don’t like it.

How to Remove Sticker Residue

In the event that you got here too late and already pulled off a sticker or decal that left a residue, I have a solution. This comes after frustration that resulted in residue left over by the registration sticker on my front windshield. It seems impossible to get off without painstaking scrapes.

However, all you really need is rubbing alcohol or nail polish remover. Was your first thought, “Won’t that damage the car paint?” Get Jerry shares, “Using a ratio of 10%-15% rubbing alcohol to 85%-90% water mixture will not damage car paint, and is highly effective in removing grease, oil, and other stubborn stains from your car’s exterior paint coat.”

So, there you have it. While you have your own vehicle, don’t worry about how you express yourself. Feel free knowing you won’t be stuck with a bad choice like you were with that tattoo you didn’t think through.

Let’s bring back the bumper sticker and decal collections!