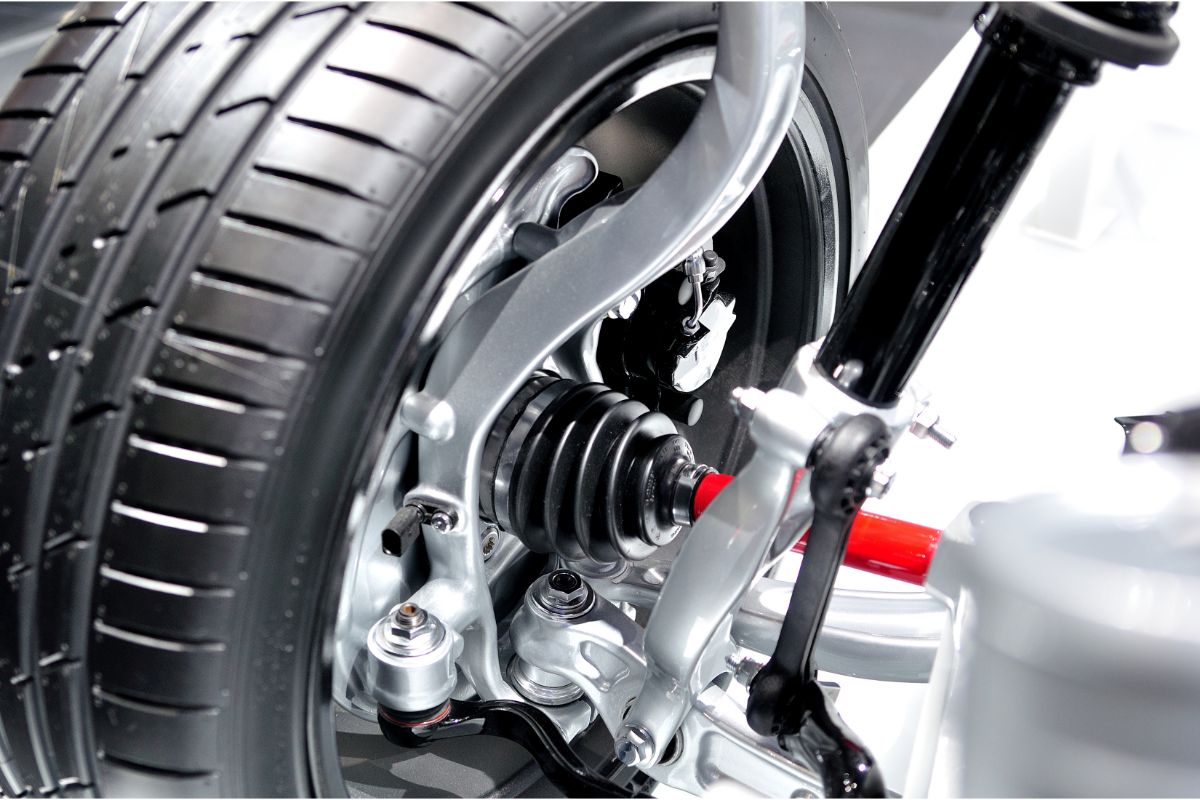 Contents Show
Car Axle Basics
Different Types of Car Axles
Front Axle
Rear Axle
Stub Axle
What is an E-axle?
E-axle Basics
A Brief History of E-axle Technology
Do Electric Cars Have Differentials?
When Your Axle is in Disrepair

To clarify any suspicions that electric vehicles might not have axles, it’s important to first understand some basics about what an axle is and why it is found on all types of vehicles. The axles are used for driving, steering, and braking. This means you cannot have a wheeled vehicle without an axle. Essentially, an axle transfers torque and power from the engine to the wheels. Because the axle participates in carrying the weight of the vehicle, passengers, and cargo, it needs to be able to sustain the weight of the vehicle and withstand the forces of braking and driving.

The earliest cars had a solid rod with two wheels attached. These were turned by a chain. While the axle in modern cars and electric cars still performs the same basic function, it’s a lot more advanced than a solid rod.

Cars that feature a solid rod rear axle depend on a differential to deliver power. The majority of modern cars feature complex axle configurations with constant velocity joints. These not only allow the wheels to turn, but they also form part of the shock absorption system.

The majority of modern axles are short roads with a rubber boot that covers a CV joint at each end. In some instances, they are referred to as “half-shafts.” The purpose of the rubber boost is to hold the grease inside and keep dirt out. The grease in the rubber boot is important to ensure that the CV joint functions properly. However, this complexity increases the risk of something going wrong.

Related: Do EVs Have Engines?

Cars generally have two basic types of axles. The first one is known as a dead axle. Its only purpose is to help the car carry its weight. Please keep in mind that this axle does not rotate with the wheels. The second axle found in vehicles is the live axle. This is the one connected to the wheels, and its role is to propel the car. Wheels are joined to the axle by a constant velocity joint. This enables the axle to deliver power to the wheels efficiently.

Apart from dividing vehicle axles into dead or live, they can also be classified into other categories. For instance, you will often find information about front axles, rear axles, or stub axles. 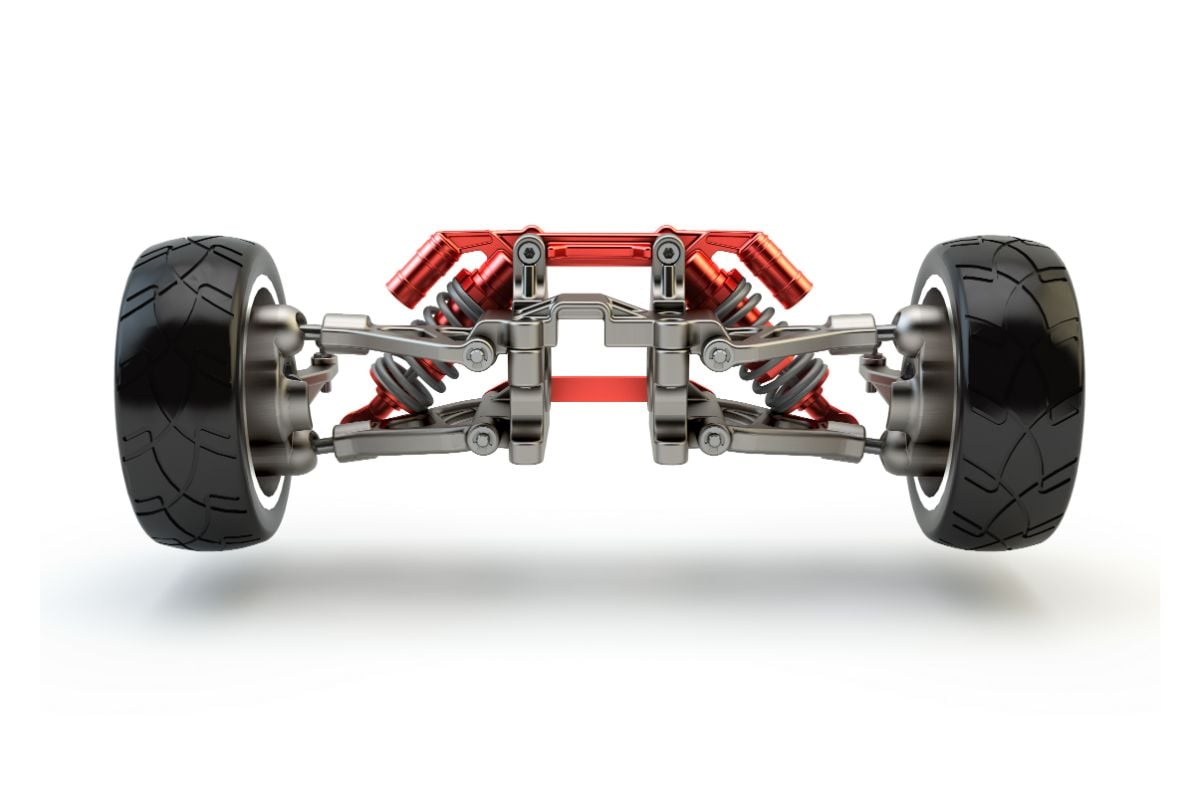 The front axle can be found at the front of your electric vehicle. Its role, as mentioned before, is to provide support to the steering. It also helps to process the shock generated by an uneven road surface. Some cars have live front axles, and some have dead front axles. Live front axles help to rotate the wheels. 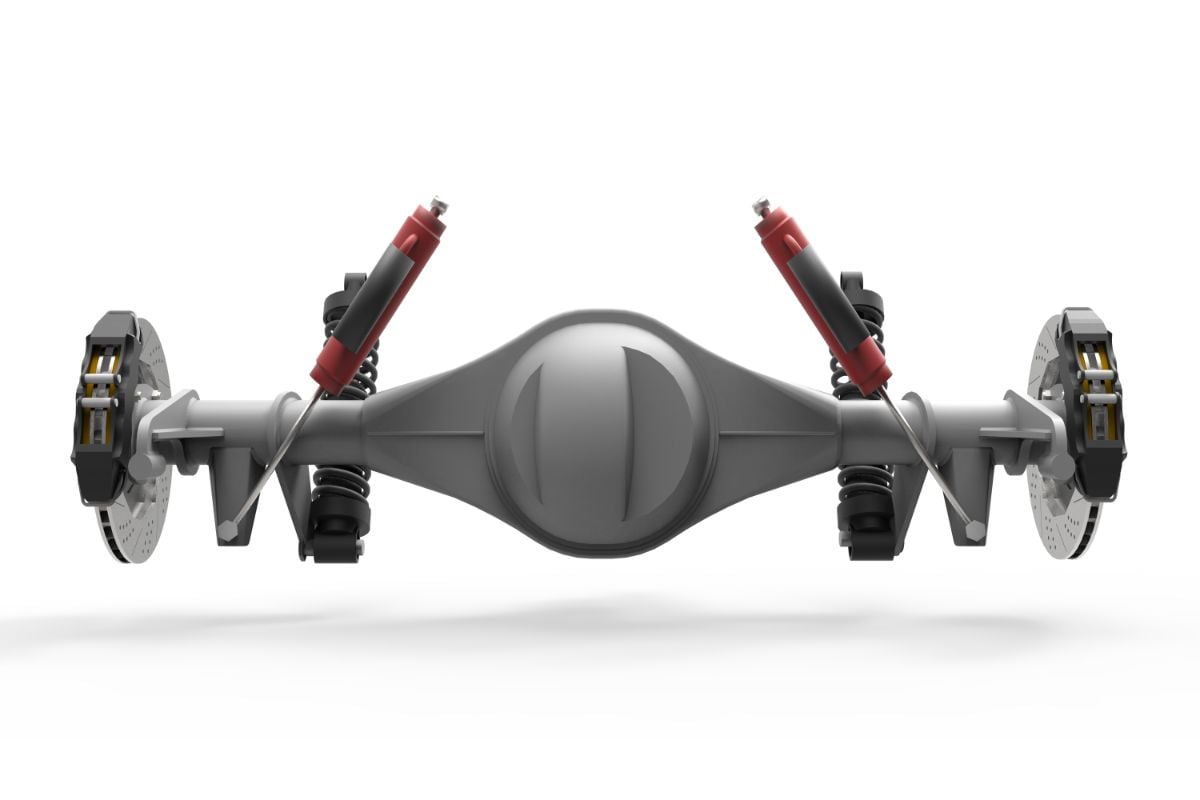 The rear axle can be found at the back of the vehicle. The majority of real axles are live. This means that they rotate with the wheels, and they are responsible for delivering power to the wheels. The rear axle is usually connected to the motor by a driveshaft.

The third type of axle is the stub axle. This is usually found in vehicles that have rear-wheel drive. The stub axle is connected to the front axle using kingpins. Depending on the arrangement and its components, there are four types of stub axles. This includes the Elliot, reverse Elliot, Lamoine, and Lamoine reverse. The Elliot is connected to the front axle using a kingpin, yoke, and a cotter. On the other hand, the reverse Elliott, as suggested by the name, has a reversed arrangement of the Elliot axle. Lamoine stub axles use an L-shaped spindle and a kingpin. Unlike Elliot axles, they don’t have a yoke.

What is an E-axle? 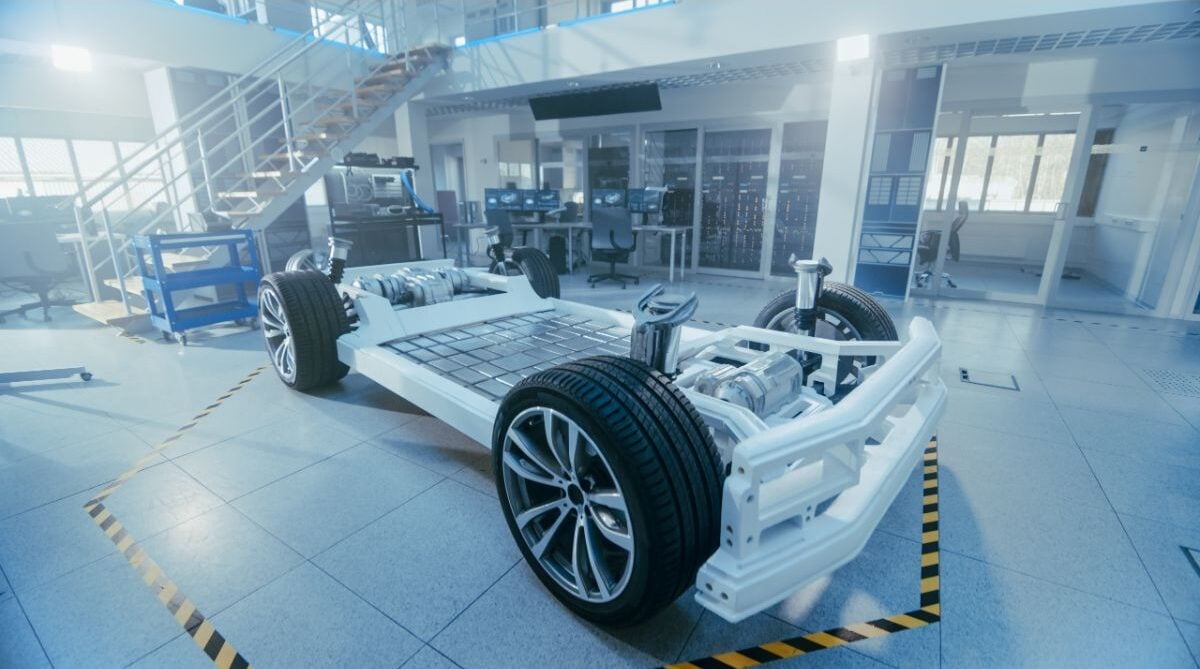 You can expect future electric vehicles to dump the traditional gas-powered vehicle axle and transition to the electric axle. This axle is expected to deliver a lot of power and the efficiencies associated with it.

E-axles are not a fantasy or some technology that will only be available in the future. They are here now. Under the hood of the 2016 hybrid, four-wheel drive Toyota Rav4, you will find an electric axle. This unit serves as the power source for several hybrid and electric vehicles. Electric axles are fully integrated into either the back or the front axles. Their purpose is to deliver power to the wheels. In most instances, electric axles are fully contained units that are composed of several lightweight components made from high-strength metals like aluminum. Electric axles comprise components like shafts, bearings, pinions, differential gearing, and any other upgrades, in particular, make you will be looking at.

For cars that have an e-axle on the rear axle, the front wheels will rely on power from a regular internal combustion engine or an electrical motor. When the two engines are working together, as is the case for some types of plug-in hybrid electric vehicles, there will be a tremendous amount of power available to propel the vehicle. This is a crucial selling point for electric vehicles apart from the improved efficiency and reduced emissions.

A Brief History of E-axle Technology

One of the first car manufacturers to put electric motors on the rear axle of its vehicles is Toyota. This car was a front-wheel-drive option, so the e-axle turned it into an all-wheel drive. Toyota refined this technology until they released the RAV4 hybrid, which had a gas-powered 2.5-liter, four-cylinder engine and a pair of electric motors, one on each of the rear wheels. This car boasts 194 net system horsepower. Most importantly, because of the rear electric axle, the hybrid is highly fuel efficient, hitting about 32 mpg, compared to the gas-powered variant that only delivers 25 mpg.

Do Electric Cars Have Differentials? 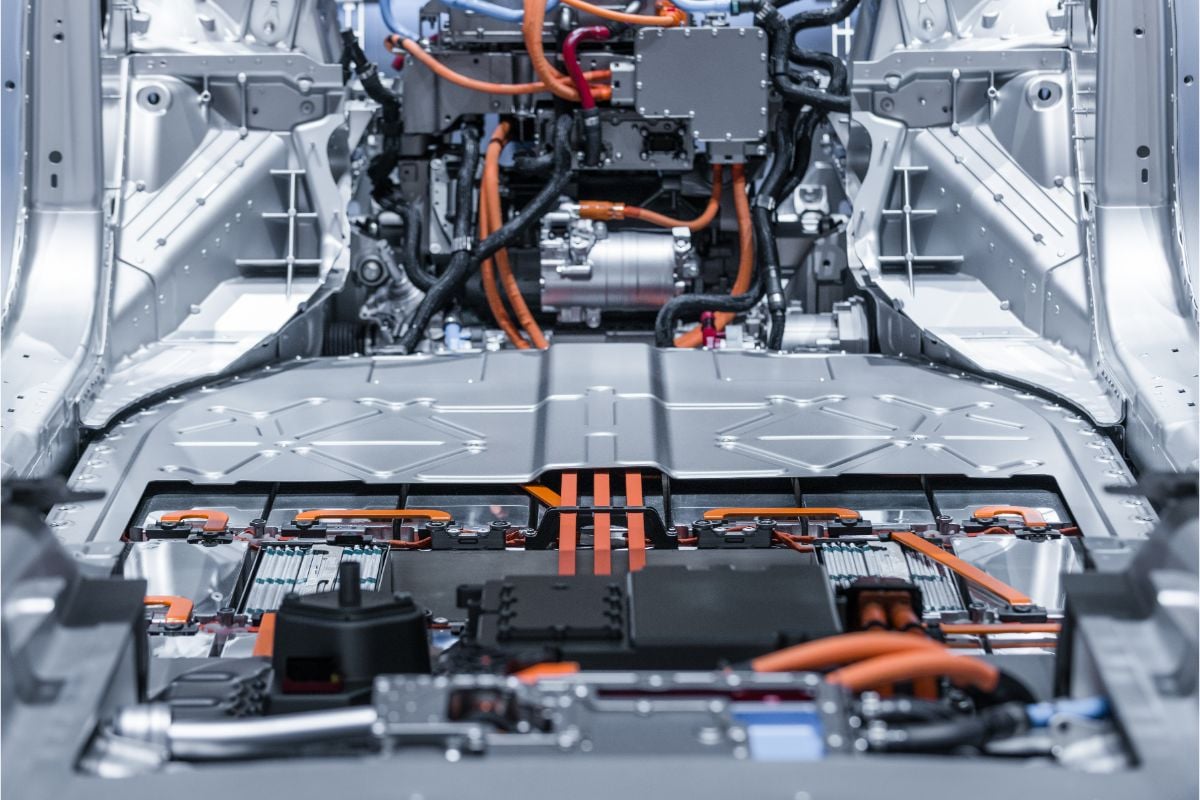 An electric vehicle utilizes computer-controlled limited-slip differentials. These are also known as E-Diffs. The electric differentials use steering command signals, motor speed signals, and throttle position signals to control how much power is sent to each of the wheels. This helps to ensure that each wheel receives the amount of torque it needs. When you are using an E-diff, your electric vehicles will have better traction control. As you might imagine, an electric vehicle with an E-diff delivers better performance.

When Your Axle is in Disrepair

As mentioned before, axles participate in the handling of a car’s weight. This means they are generally made to be quite robust. Unfortunately, like any other part of a vehicle, they can sustain damage. Over time, an axle can become weaker, up to the point of needing a replacement. There are several signs that your axle might be damaged. The most common signs include a clunking sound when you start driving the vehicle. You can also start experiencing some vibrations while driving your car, turning, or breaking. In most instances, the axle is part of the complex set of problems that cause these signs. In the worst-case scenario, a broken axle can cause your car to not move altogether. If you notice any of these signs, you should get your car checked by a professional mechanic.