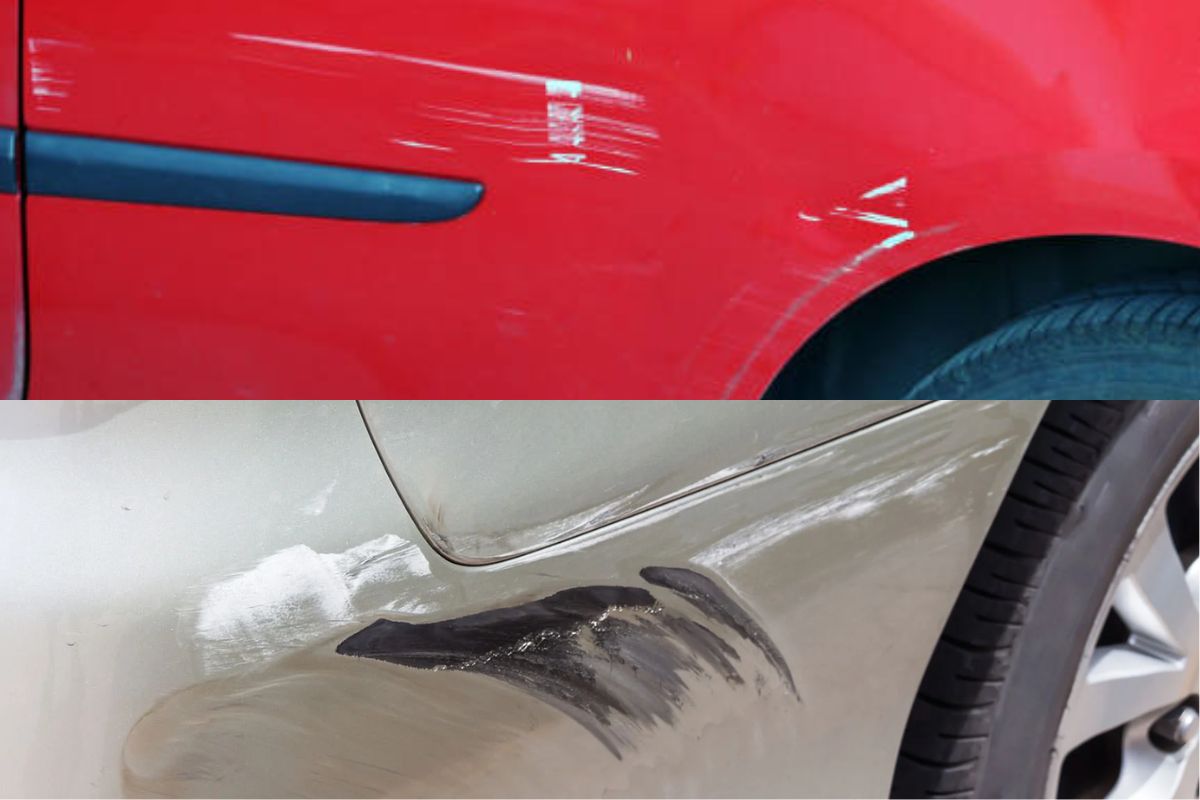 If you can’t tell which one is which, you leave yourself vulnerable to attempting to fix issues that are beyond your scope of expertise. On the flip side, if you treat a scratch like a scuff, you could make the issue bigger than it was initially, like rubbing the wrong stain on a tablecloth.

What is a scuff? A scuff on a car is a bump on the surface of the car. You might also hear a scuff called a paint transfer. In either case, a scuff sits on the top clear coat layer on the paint of your car. Usually, you can buff a scuff out and have your car looking good as new in no time.

Although there are several methods for attempting to remove a scuff on a car on your own, it’s best to have a mechanic or detailing professional evaluate the extent of the damage before proceeding. A scuff is similar to a papercut on your car–it requires some light evaluation and treatment but does not jeopardize the wellbeing of your car.

Scuffs are typically caused by another car rubbing against your car. When another car scuffs yours, it will leave behind traces of its paint or debris. Scuffs are an annoyance to car owners, but they aren’t a severe form of damage or difficult to remedy.

The key to fixing a scuff is softening the paint or debris and then wiping it off of your vehicle. The way that you do this depends on your type of car, the severity of the scuff, and the tools available. If you attempt to fix a scuff yourself, it also depends on the level of risking harming your vehicle’s paint job you are willing to take.

Some folks are open to screwing up the job and taking the car to a detailer if necessary to fix it. On the other hand, others are unwilling to risk creating further damage to their car. It’s best to consider how you will handle your scuff being worse than you initially anticipated before you try to fix it.

As long as the scuff only affects the superficial top clear coat of your car’s paint, though, you should be okay to at least test the scuff by seeing if it will soften and buff out. To buff it out, simply take some wax and a towel. Applying a medium amount of pressure, buff the scuff till you see it disappear.

Sometimes, you can determine if it’s a scuff or a scratch based on the source of the damage. Scuffs are not always caused by skirting against another car. If you’ve bumped against plastic or rubber (or even nudged your garage door as you’ve backed out of it), you might have caused a scuff.

Regardless of how a scuff was formed, experts call all scuffs paint transfer. Even if no paint was swapped in the process, it’s still called that. If you don’t notice dents or other kinds of damage to the top clear coat, you should be able to remedy the problem yourself.

If you can’t buff the scuff out on your own, you probably have a scratch on your car. As you’ll read, a scratch is a deeper problem–literally.

What is a scratch on a car? 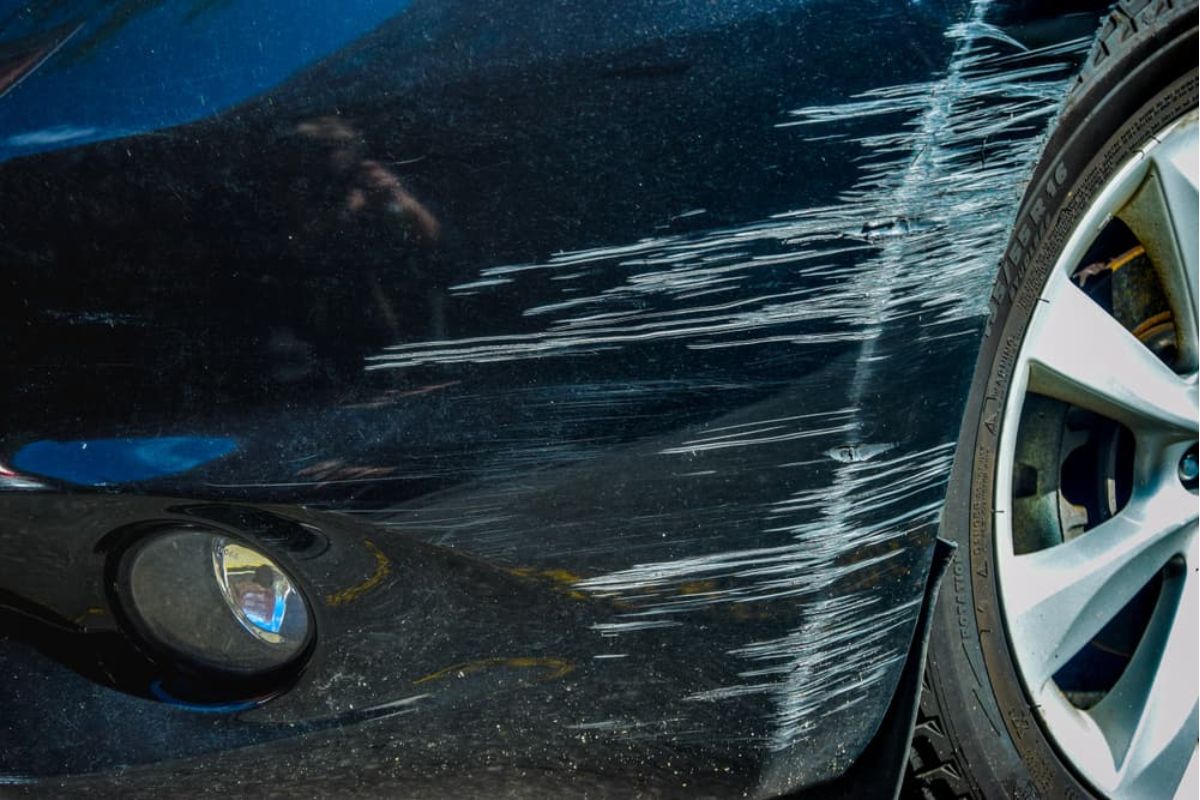 Compared to scuffs, scratches can be more complicated in their causes, level of damage, and treatment. Even a light scratch is impossible to buff away, unlike a scuff. When the clear coat around a scratch has been scuffed, you still can’t DIY the fix like you would a regular scuff.

Small scratches are a common occurrence in cars. After all, poor washing techniques or inappropriate drying tools can cause a superficial scratch. For very light scratches caused by these types of issues, polishing might diminish the appearance of the scratch.

If a scratch is deeper, you will definitely want to leave it to the professionals to cover it and correct it. Otherwise, you risk making a bad situation worse. While heavy polishing with an aggressive compounding medium might remove moderate scratches, it’s not guaranteed to help the issue more than it could hurt it.

While scratches might seem like a cosmetic issue, they can create real problems for the well-being and experience of your car in the long run. Once the scratch has exposed the primer, the body paint below it will be at risk of rusting if it isn’t fixed.

Severe scratches pose even bigger problems. If a scratch is severe, it will typically require a professional to replace the panel. Obviously, only a professional can assess how severe the damage is.

However, if the clear coat is removed entirely, it’s safe to say that only someone who has knowledge and experience should attempt to repair it. Repairing deep scratches is an involved job. Once a scratch has escalated to the point where you can view the metal sheet below the layers of paint on a car, a detailer must sand the paint to the metal.

After the paint has been sanded using a range of grits, the detailer will apply the paint from start to finish. This means replacing the primer, a color-matched body paint, and then layers of clear coat. This might seem like a lot for keeping up appearances.

However, letting this issue fester could lead to problems with rust, which will limit the lifespan of your vehicle. If you hope to get many more miles out of your car or sell it for a decent price, you’ll want to upkeep the paint job at any cost.

What are the layers of paint on a car? 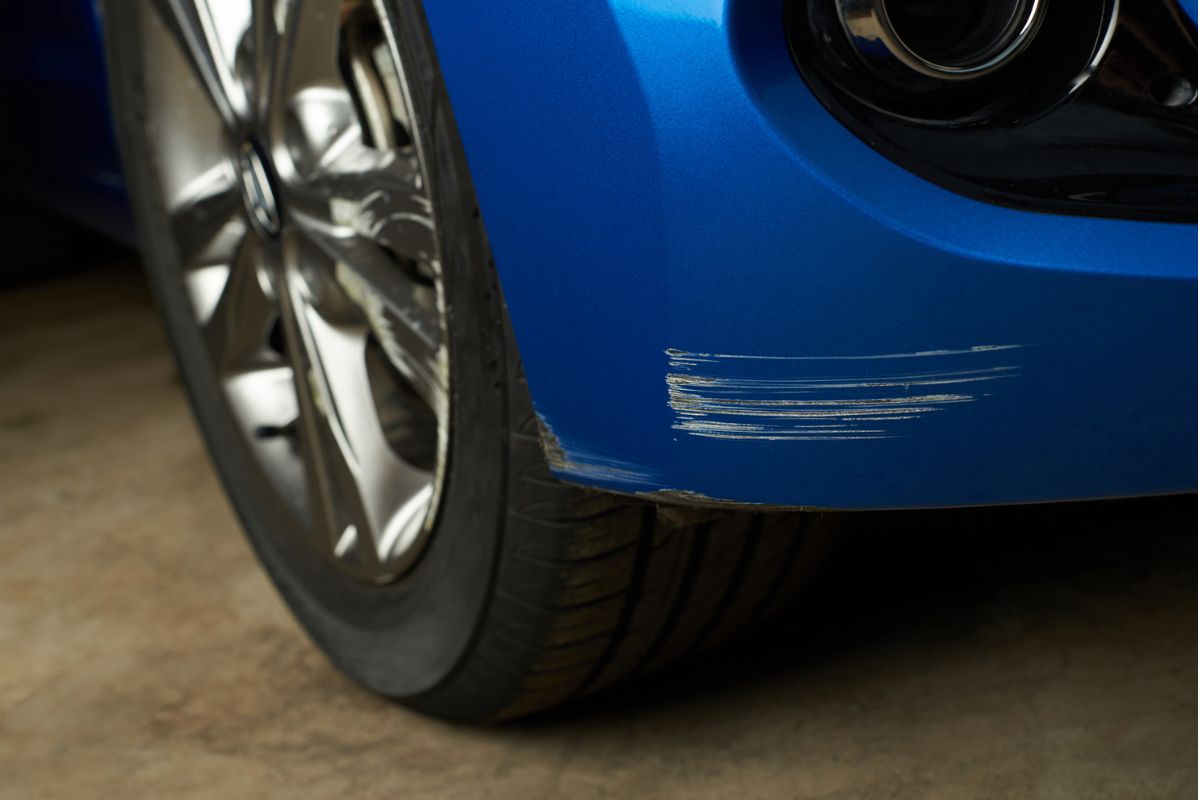 When you know the layers of a car’s paint, you’ll be better able to identify the extent of damage to the paintwork. Without this understanding, a light scratch might look like severe damage or you might downplay the severity of a bad scratch.

Every shop has its own number of layers. Typically, shops will use two layers of primer and then apply three layers of paint to the body. After applying these layers, the body shop can add the clearcoat to finish the job.

Going from the top down, the first layer on a vehicle is usually wax. Wax is designed to protect the car from water damage or UV rays. There are other coatings that create a barrier between the body of the car and the elements, but wax is the most commonly used.

When you use a coating on your car, you should make sure that it is both thick and flexible. After all, you want it to be able to protect your car when a piece of debris comes flying at your vehicle or another car rubs against your car. Think of it like a rubbery shield against damage for your first line of defense.

The best way to fix problems is to prepare to avoid them in the first place. To prevent scuffs, scratches, and other damage to your car’s body, you’ll want to invest time, money, and energy in applying some sort of protective coating. This will cost you more upfront, but it will save you dollars in the long run. It’s definitely a worthwhile investment.

Underneath the wax, you’ll find a clear coat. Similar to nail polish, the clear coat is made to protect the colored resin on your car. As the name indicates, the clearcoat doesn’t have a color to it.

The clear coat helps protect your car. It also adds a shiny, squeaky clean aesthetic to cars. Once you’ve delved below the clearcoat, you’ll find the basecoat of your car’s body paint.

The basecoat is not designed to last–it’s designed to add color to your car. As a result, the basecoat doesn’t incorporate a hardener or strengthener to stick to the primer beneath it. This is one of the reasons why your car needs a clear coat.

Without the clear coat, the basecoat would rub off rapidly, leaving your car vulnerable to rust and damage from the elements. Below the basecoat, the primer lies on the metal surface. The primer makes the vehicle’s metal surface ready to bond the raw paint coat.

It also allows the paint job to have a smooth finish in the end free of patchy or uneven paint sections. As you’ve probably guessed, the only layer that lays beneath the primer is metal. The metal is your car’s innermost naked layer.

Most of the time, you won’t see what this looks like. If you do, your car needs to go to the detailer as soon as possible for a paint job!

Can you fix a scuff on a car? 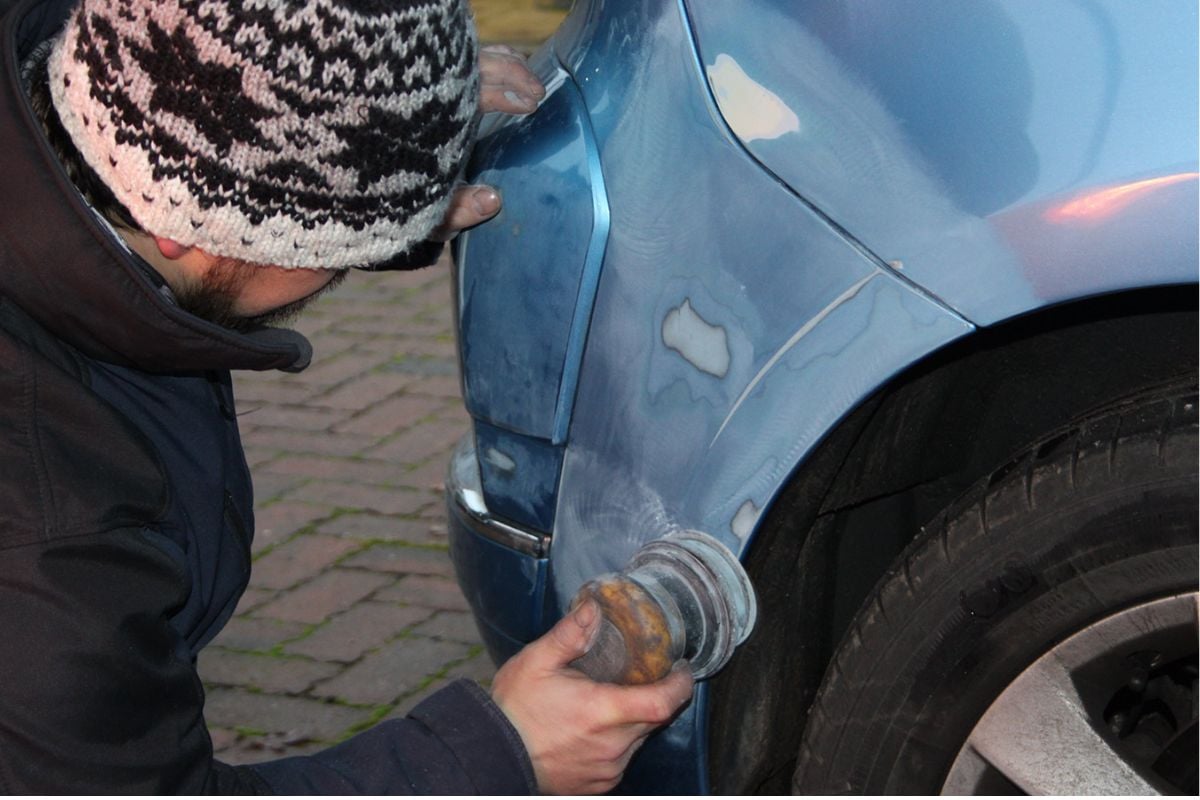 If the scuff on your car is truly just a scuff, you should be able to fix it. While there are plenty of different methods to try, the most tried-and-true way to fix a scuff is rubbing it out with fine-grit sandpaper. After you’ve rubbed it out, reapply the clear coat using aerosol spray to protect the lower layer of paint on your car.

If you don’t want to be left to your own devices to fix the scuff on your car, you can take it to a body shop and have them examine the scuff. They will be able to tell you whether the scuff is actually a scuff or if it is really a light scratch, as well.

If you know it’s a scuff and you want to DIY the job, you can also purchase one of the various car scratch repair kits on the market. As long as you follow the instructions in the repair kit, you should be golden.

How much does it cost to get scuff marks off a car?

According to chase.com, “At a dealer, the cost to remove a car scratch can range from $150 to $1000—double the amount for repairs to the hood or doors. Auto body shop: Most independent auto body shops should fix all scratch levels, offering various repair options for different damage degrees.” 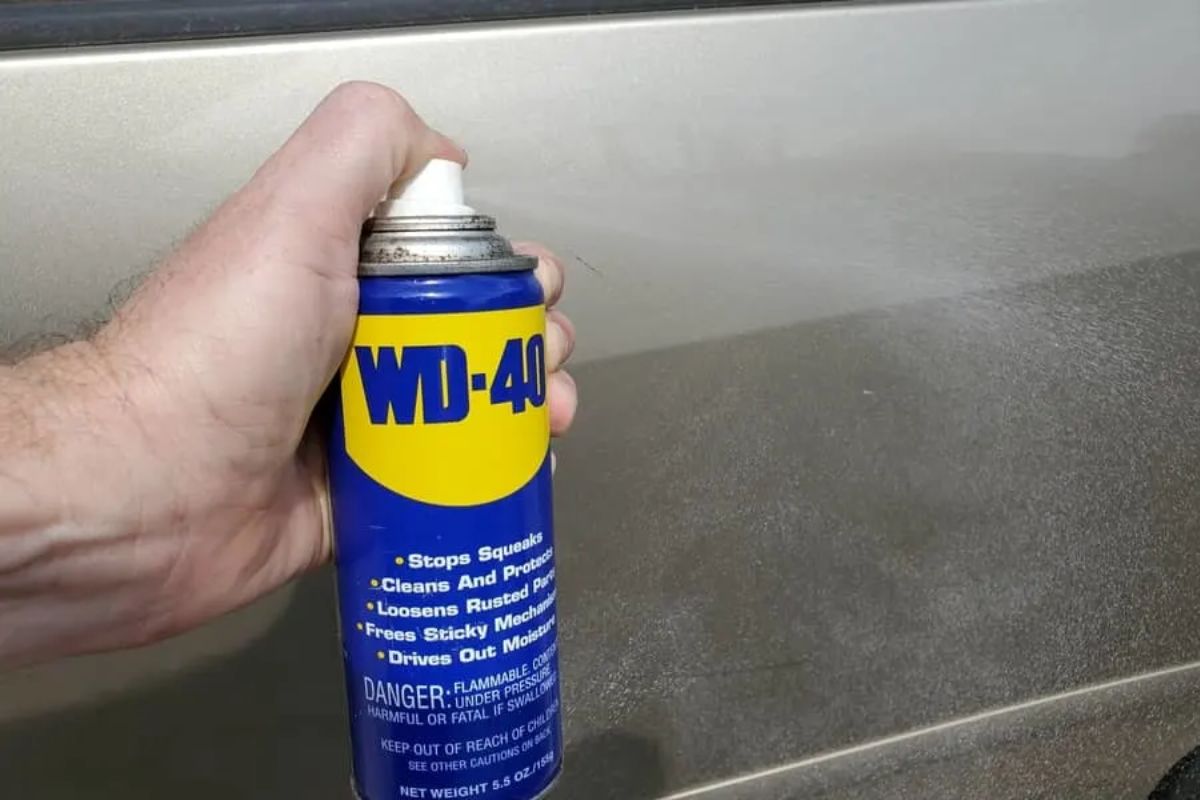 While it obviously won’t work on all scuffs or scratches, WD-40 can help to remove scuff marks. For this method of scuff removal, you just need to spray the WD-40 Multi-Use Product onto the scuff-marked surface. Let the product sit for a little bit while it loosens the scuffed paint.

Once the scuffed paint has loosened up, you can attempt to wipe it off using a soft, clean rag.

WD-40 won’t harm your car’s paint job. As long as you rinse the area off with soap and water after using WD-40, it should leave any residue or marks on your car. In addition to rubbing off scuff marks, WD-40 is also useful for keeping insects away from hitting your vehicle and removing a variety of grime and animal droppings safely.