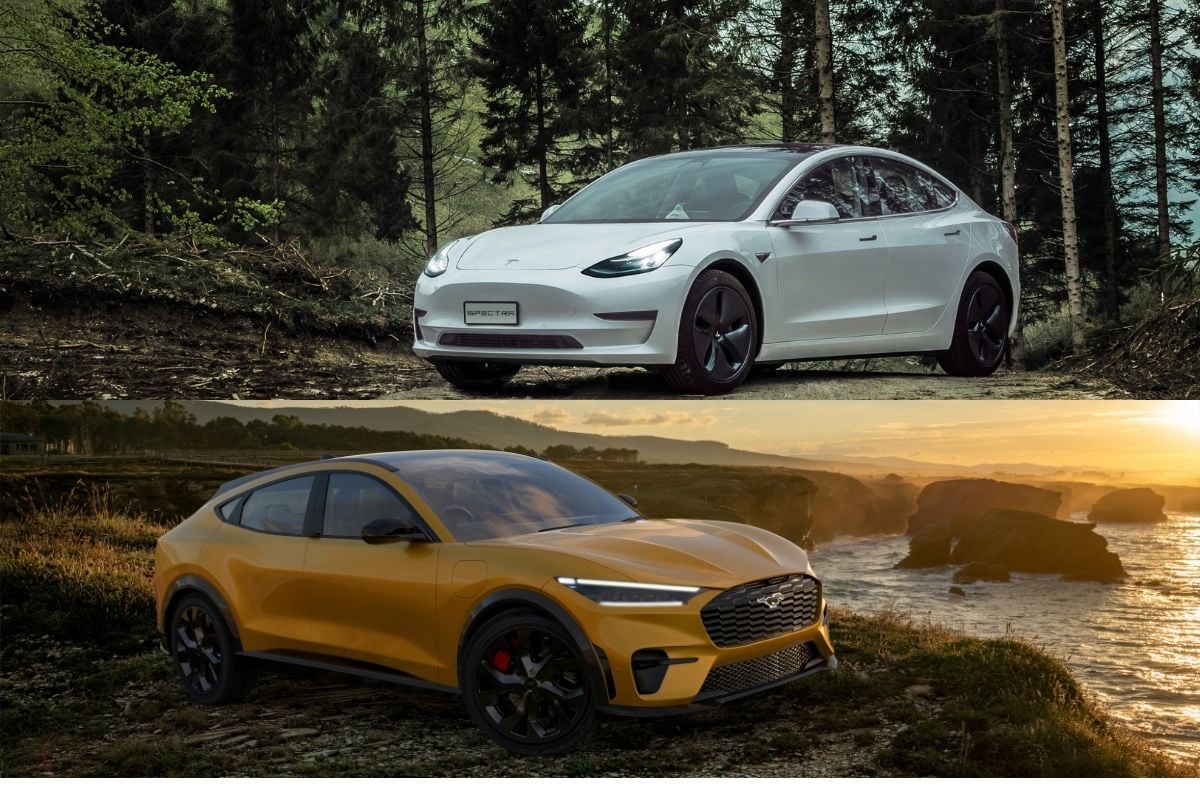 Tesla is the world’s innovative leader in all-electric vehicles, but did you know that Ford first began planning their low-cost all-electric vehicle way back in 1914 (almost 90 years before Tesla was even founded)? It’s true! And now we have the Tesla Model 3, first released in 2017, to compare to the all-new, all-electric Ford Mach-E that was just released last summer in 2021. Which do you think is the better vehicle? Let’s get into it!

Contents Show
What is the Tesla Model 3?
What is the Ford Mustang Mach-E?
How are they different?
Features
Materials
Design Features
Durability
Cost Differences
History
Conclusion

The Tesla Model 3 is a compact electric sedan that was first released in 2017 but has new models coming out every year since then.

It is currently the only car of its kind with an impressive 350 miles of range and fast-charging stations. It is the best-selling electric car on the globe, selling 501,000 units in 2021 alone.

One of the largest reasons why people choose Tesla over other manufacturers is their continuous lifetime updates. The vehicles are updated on a regular over-the-air basis to improve as the software does, so the cars avoid becoming obsolete while remaining in as low maintenance as possible.

The Tesla Model 3 (and Tesla as a whole) is an innovator that is leading the way in the electric car industry. You’ll see this reflected in the overall design and thoughtful functionality, as well as the price.

What is the Ford Mustang Mach-E?

The Ford Mustang Mach-E is an all-electric SUV. It was first released last year in the summer of 2021.

The Ford Mustang Mach-E has a range of 314 miles per charge. Ford doesn’t have an extensive network of charging stations quite as Tesla does, but Tesla is working to create and install universal chargers for all brands of electric vehicles to use.

Ford just released its first over-the-air update in June 2021, without any issues. This is still a new concept to Ford, but it seems to be doing well.

While Ford is a proven, well-established name in the automotive industry, electric vehicle manufacturing is all-new for the company. It will be interesting to see how things intertwine between Ford and electric power. 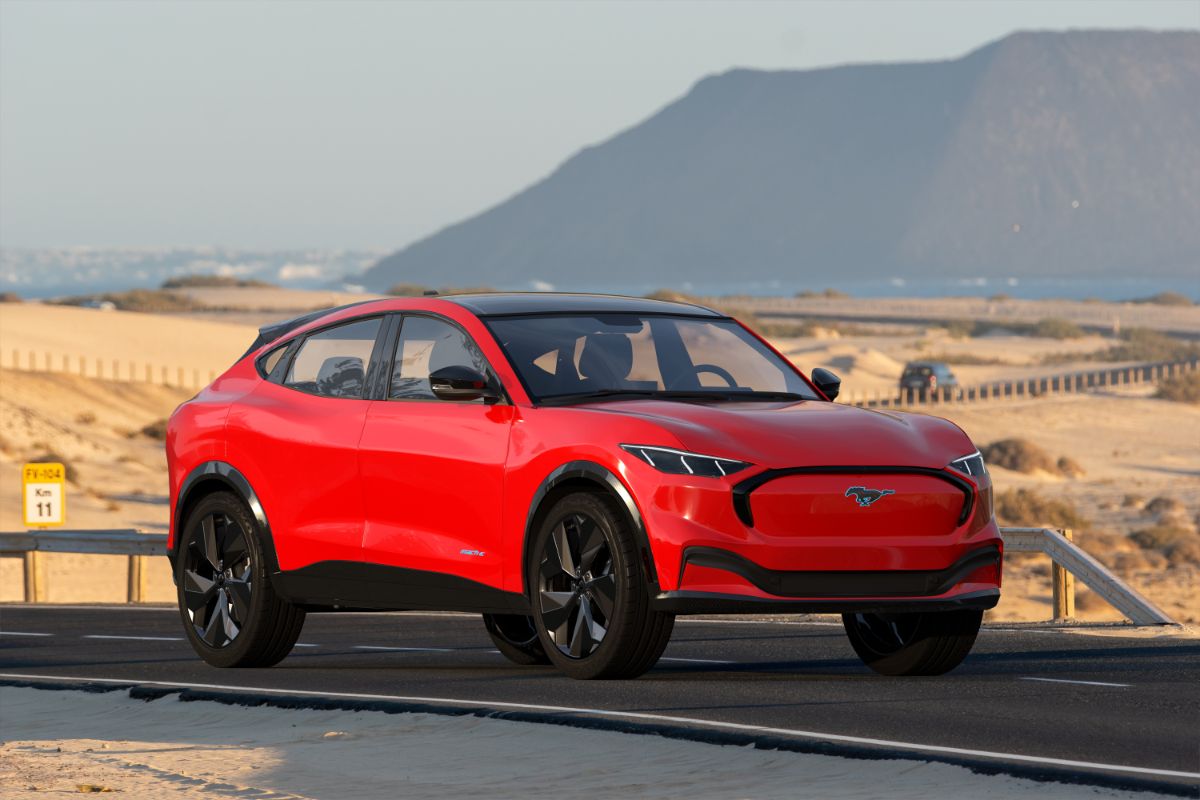 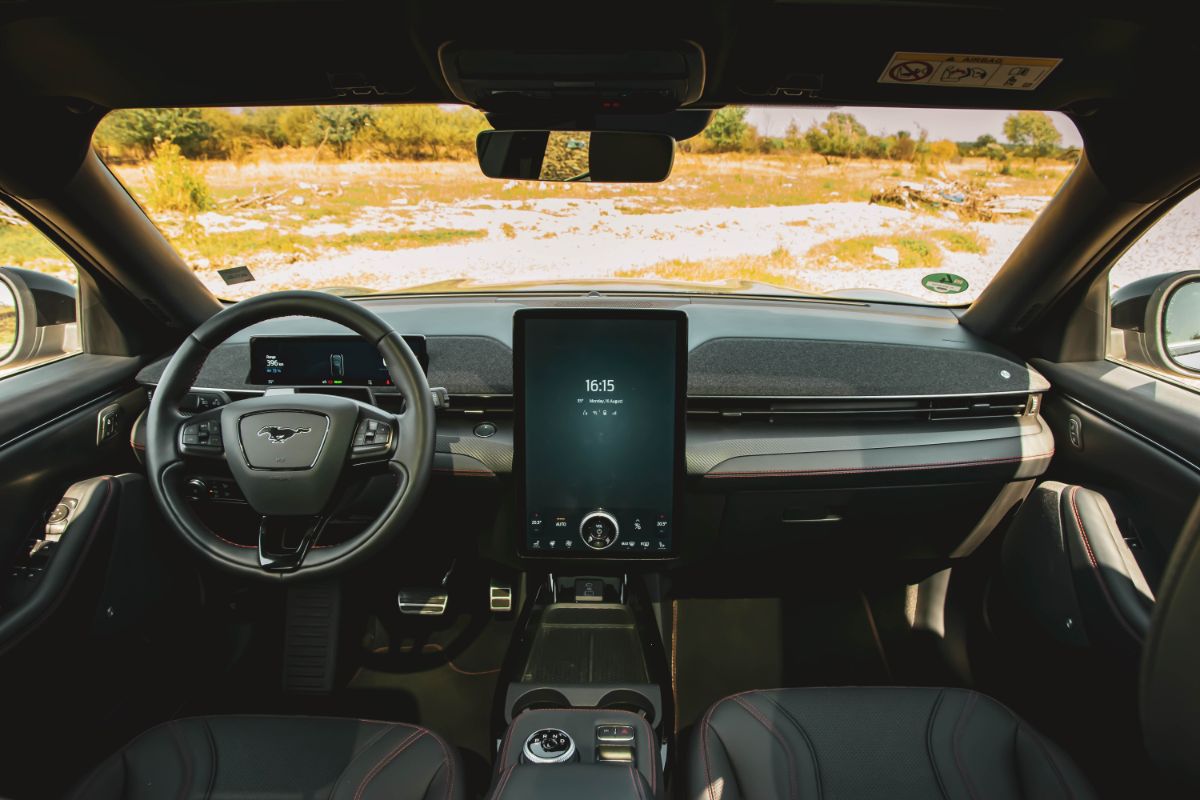 The Tesla Model 3 seats five people, and has some sleek design aesthetics. The outside of the vehicle is minimalist, aerodynamic, and sophisticated. The interior, though, in my opinion, is the real show stopper. The first thing you’ll notice is the giant fifteen-inch stack display that replaces the traditional dashboard. Next, you’ll see the picturesque all-glass moonroof and a surprising amount of storage space and legroom.

The Ford Mustang Mach-E can seat up to five people, and also has a unique aesthetic. The best way to describe the Mach-E is a crossover between a traditional mid-2010 Ford Mustang, a mid-2010 Ford Explorer, and a 2022 Tesla Model X. It’s not quite a coup, nor is it really a crossover; it feels as though it belongs in a brand new class of its own. Perhaps as an all-terrain, futuristic Mars cruiser. It has many curves and muscle design traits but seems to be more minimalist than other Ford designs.

The Mach-E has a 15.5-inch touchscreen command center in portrait orientation. Ford did not completely remove the traditional dashboard, though. While clusters of gauges are gone, a slim landscape digital information bar takes its place. Like the Tesla, Ford Mach-E has a stunning full-body moonroof. If you love cruising through the mountains as I do, it will soon become one of your favorite design elements.

The interior aesthetic is more minimalist than usual for Ford; it still has a lot of busyness going on when compared to Tesla designs. The steering wheel has several visible seams and stitching, as do the seats, console, and dashboard. While many enjoy these details, I have to say that I prefer the sleeker design of the Tesla.

One significant difference between Tesla and Ford is the onscreen interface. Tesla, which has been building and using this screen for much longer, has nearly zero lag. The Ford, on the other hand, has a more noticeable lag. While it is Ford’s first year of manufacturing this technology, these delays can pose a danger, especially if they distract a driver while in motion. 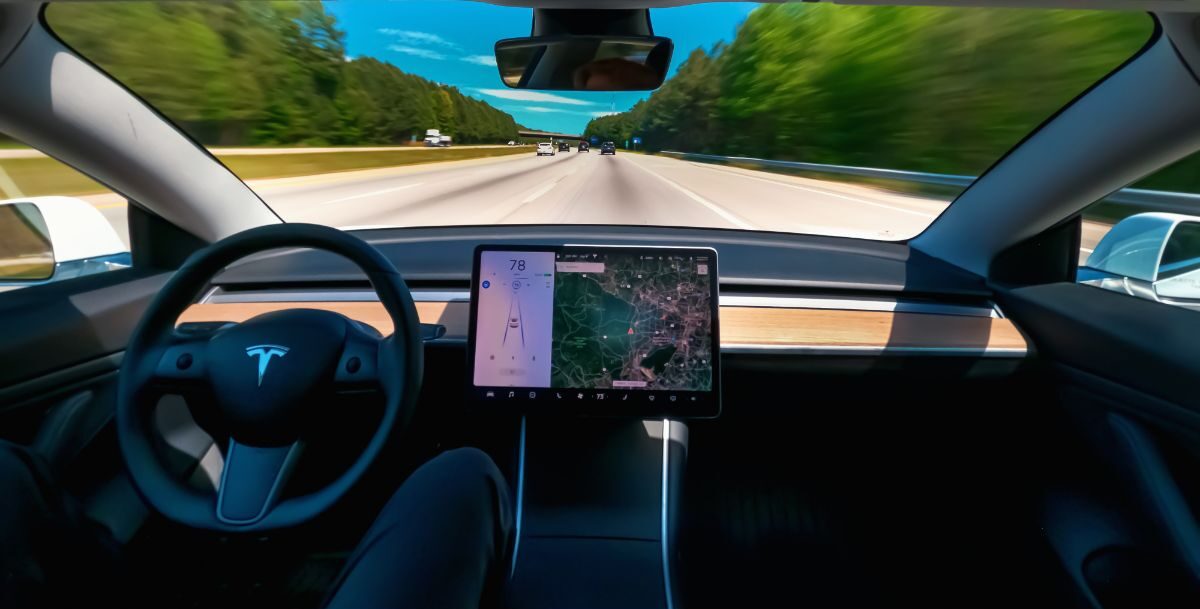 It is too soon to compare the Mach-E to the Tesla Model 3. This is because the Mach-E just began production in 2021, and several of the Mach-E models (specifically, the Premium and California Route 1) are out of stock or nearly impossible to find.

According to Caredge.com, a Tesla Model 3 will cost about $3,587 for maintenance and repairs during its first ten years of service. For reference, the average luxury sedan costs about $11,704 during the same time span.

All of these figures are the purchase price and do not include the Federal Tax Credit. The Tesla price includes delivery, while the Ford rates do not. 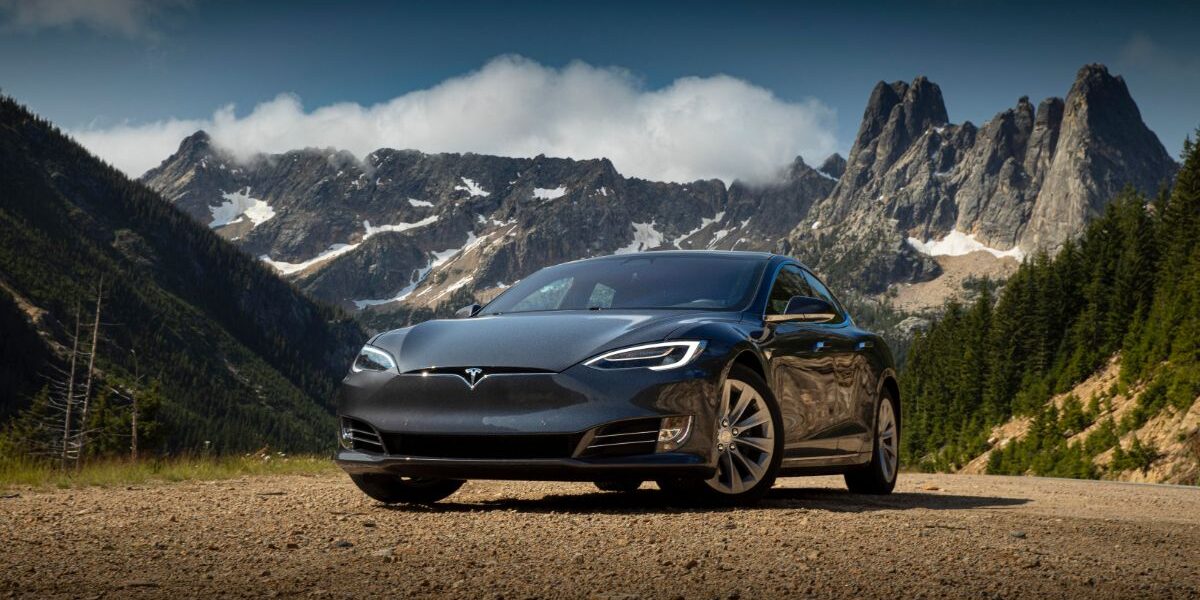 Tesla was founded in 2003 by a team of engineers who wanted to prove that electric cars didn’t require compromise. Since then, Tesla has been producing electric vehicles since 2008, when their first Roadster was unveiled. After that, the Model S was the first premium all-electric car in the world, and it has been the flagship for the electric automotive industry to keep up with. It is the best car of its class in every single category.

Even today, the Tesla Model S Plaid is the fastest car in the world (electric, hybrid, and gas) that is in production. It can go from 0 to 60 mph in 1.98 seconds. For comparison, Ford’s fastest vehicle, the gas GT, can run from 0 to 60 mph in 3 seconds.

Ford was founded one hundred years prior to Tesla, in 1903. Henry Ford, the founder of Ford, began working with Thomas Edison to create affordable electric cars all the way back in 1914. Back then, crank-starting vehicles were labor-intensive and difficult for many people, and electric would have avoided the notoriously stinky emissions. Unfortunately, the Edison-Ford car never came to fruition.

It wasn’t until the end of the 1950s that Ford began working on EVs again. In 1967, Ford produced just two all-electric vehicles, called the Comuta minicar. It could only go 35 mph and had a range of 40 miles, but it was a start. From 1998 to 2002, approximately 1,500 electric Ford Rangers were produced. Almost all of these were leased to government fleets, and most were sent back to Ford and destroyed at the end of 2002.

In 2009, the Ford Focus Electric was unveiled and later went into production in 2011. It has a 76-mile battery range. A little more than 9,000 of these cars sold until 2018, when they were discontinued. In the fall of 2018, Ford began production of the Mustang-inspired EV. This car was designed by their Edison Team and was produced in a former-Ford Factory in downtown Detroit.

While it is beyond exciting news that other manufacturers are throwing their hat in the all-electric ring, it seems that none of them can keep up with Tesla just yet, literally or figuratively speaking.

My first vehicle was a Ford, and while I’m a long-time supporter of the brand, there is no comparison between the Model 3 and Mach-E. Tesla wins every round, every time.

TTesla Model 3 is faster sleeker, has a more extended range, better technology, a superior charging network, more maneuverability, and (usually) a better price. Objectively speaking, Tesla wins the better luxury and aesthetics too. Their design is just so thoughtful and responsive; it’s simply tough to compete with Tesla.

Enough of my opinion though; what are your thoughts? If you had to choose between the Model 3 and Mach-E, which would be your pick (and why)?