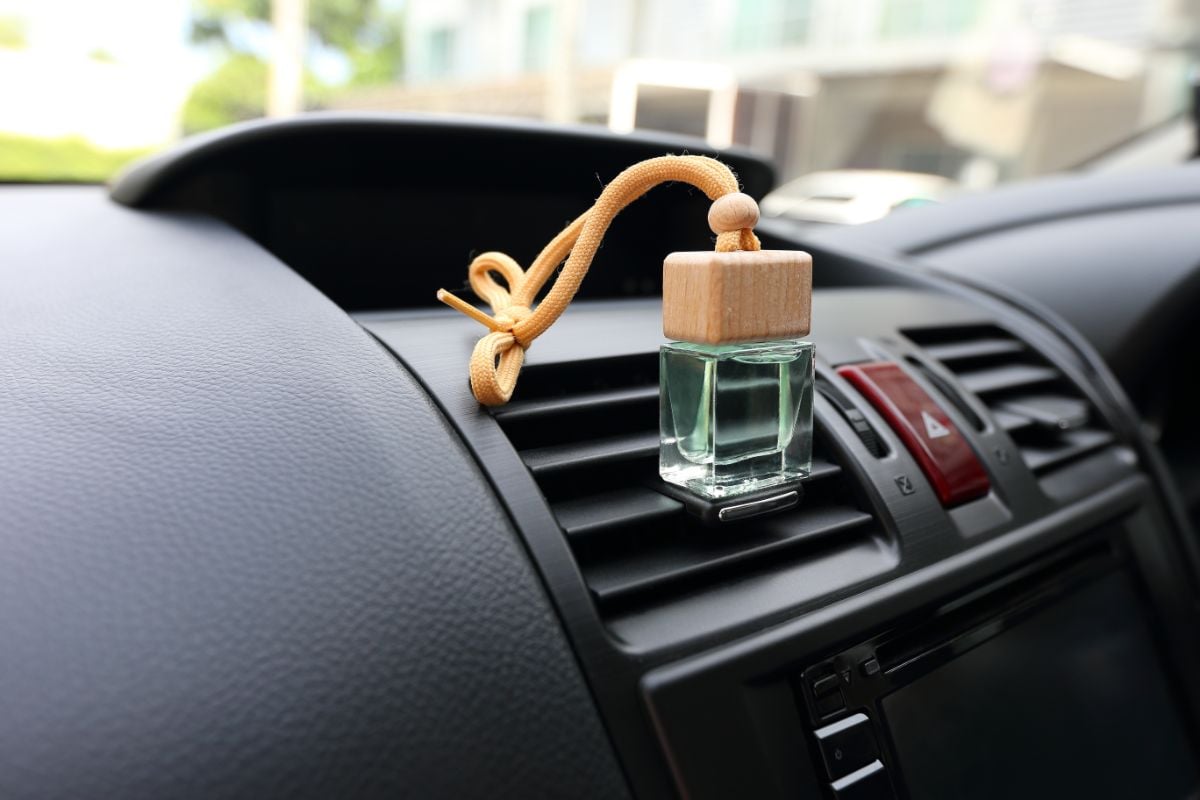 We’ve all had the experience of getting into a car that was less than stellar on the inside. Whether it was full of junk food wrappers or had a lingering odor, stepping into or having to ride in a car like that can be uncomfortable. I’ve had the misfortune of agreeing to a short road trip with a friend before getting in their car. I made the wrong assumption that everyone liked a neutral place to travel in. Well, you know what they say when you assume.

With singed nose hairs, I learned a lesson the hard way that not everyone prioritizes a clean car or even one that doesn’t smell like molded milk. As I pushed the mountain of cans and trash to the back seat so I could get in, I desperately tried to search for a way to slyly help myself and the car. Unfortunately, I never got the chance to even go inside a gas station and purchase an under-seat air freshener. I had a whole unrealized plan.

Have you gone nose blind?

To be fair, aside from the trash, she may not have realized how bad the situation had gotten. Everyone suffers from nose-blindness. If you don’t know, being nose blind is when you have gotten so familiar with your surroundings that you don’t smell when the environment has gotten worse. Your nose has simply gotten used to it.

This is common with pet owners or homes with teenagers. The smells these entities put out are noticed, at first. But when they don’t go away, the household and the nose move on. Then suddenly you get a guest who quickly brings you back to earth and makes you aware of what your nose has blinded you to. Stink.

Once a stench sets in, and you’re blind to it, it can be a challenge to combat it. How do you know a smell is gone if you can’t smell it in the first place? A great place to start after cleaning a space is with regular use of air fresheners. My friend logically knew that her car could not please anyone’s nostrils, as the visual alone would have been a mental red flag.

A nice smell would have at least been a welcome distraction from the bun with dried condiments under my shoe. Instead of shielding me from impending doom, she joyfully invited me into her auto cesspool.

To avoid causing your friends and loved ones the same fate, you will want to work on keeping the space clean and invest in smell goods for your car. The market is a tad bit oversaturated with fresh air options. There are entire aisles dedicated to personal air space at most grocery or domestic goods stores. With all the varieties, it may be overwhelming to hone in on what is right for your car and situation.

If you’re wondering what your choices are and which ones are really worth it, read on. Here, we’ll go over the various types of auto air fresheners and what kind of impact they will have on your ride as a whole. The two categories of air fresheners for cars are passive and active. The passive air freshener is one where you get it set up and then leave it to do what it was built to do. The active air freshener is the kind where you have to put in a little elbow grease, but the effort is worth it.

Get ready to be the most popular carpool pick. 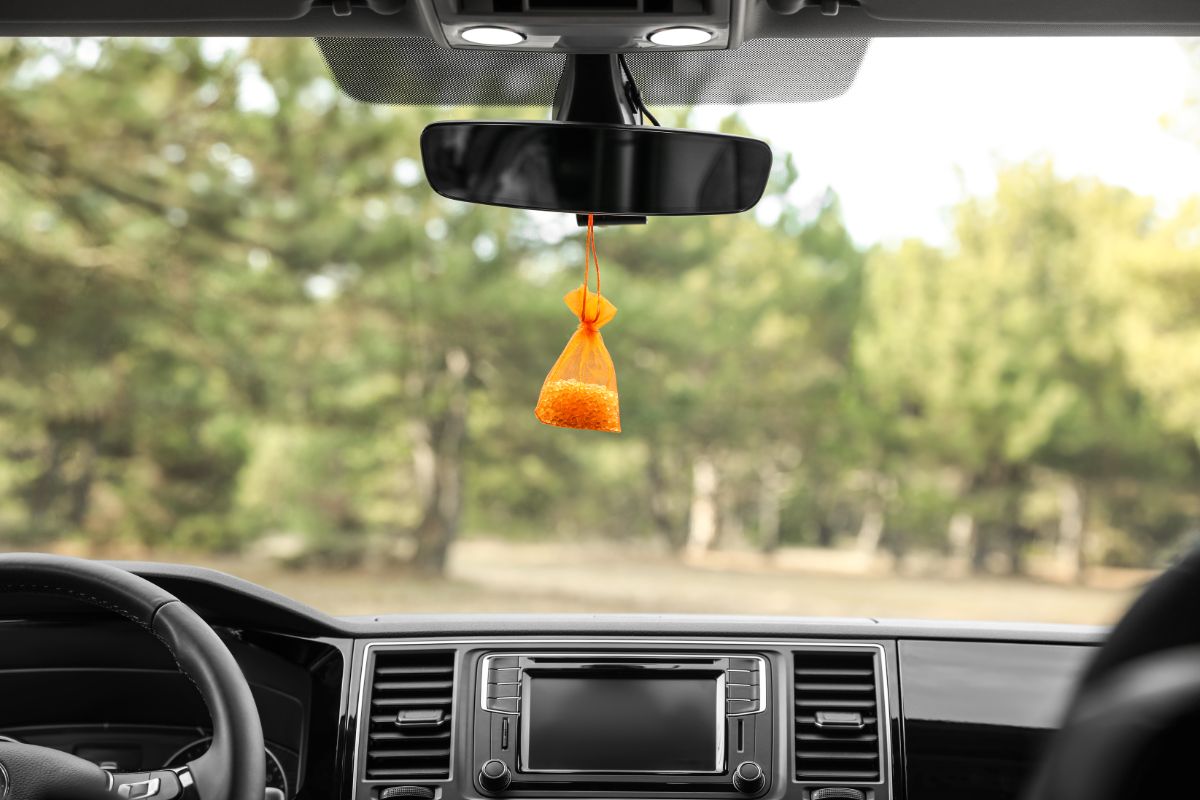 The most well-known air freshener is shaped like a tree and hangs from your rearview mirror. The brand name is actually called Little Trees. They come in a plethora of scents with just the same amount of variety in colors and patterns. They are usually offered in packs of multiples where the package explains to only expose so much of the tree at a time until the whole tree has escaped the wrapper.

These are great for a temporary burst of sweet or otherwise refreshing aroma in the car. I’ve never actually witnessed anyone following the directions of slowly removing the plastic, though. The most common way to go about it is pulling the whole tree out and hanging it that way. Once displayed, the whole car will smell like strawberry or black ice pretty intensely. Enjoy it while it lasts, the experience is over within a couple of days.

Sure, there is a variety of hanging air fresheners that are beyond just the flat plain of scent, but they seem to be the least effective over a longer period of time. But hey, if you expect to have visitors in your transportation choice, go ahead and hang one up. Feel free to keep one in your glove box for emergencies! 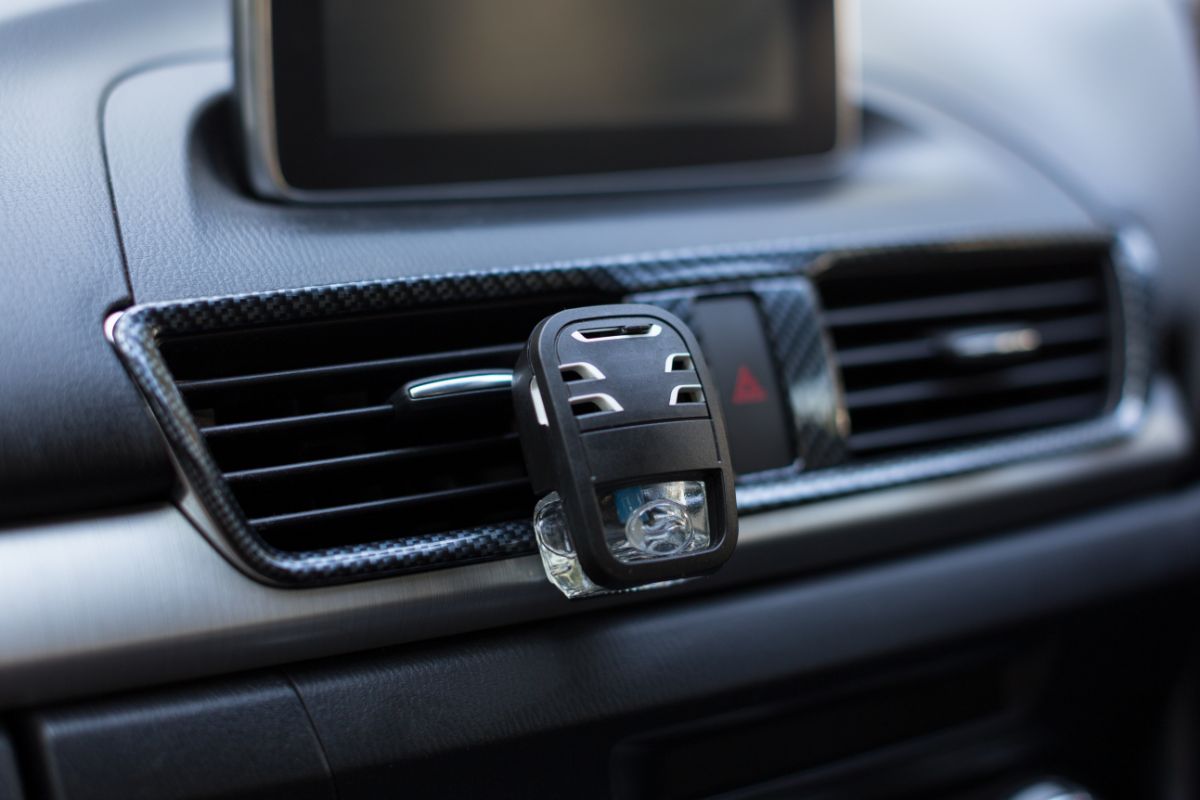 Second in noticeability would be the air fresheners that you slide into the air vent. This type has a little pouch of liquid scent that is encased by a plastic holder. These typically have arms that squeeze a vent panel so it will stay put. The way it works is when the air rushes towards the exit, it is forced to pass through the air freshener. It sort of looks like a fan on the back with a dial on the side where you can release more or less liquid into the air. These don’t necessarily pack as powerful of a punch, but on the other hand, they have more longevity.

Aside from no longer being able to get a whiff of scent, you can clearly see the liquid dissipating over time. That way, it’s easier to plan when you know ahead of time you’ll be out. 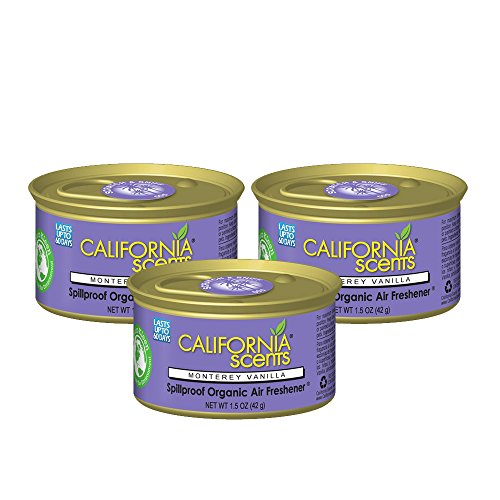 One of the longer-lasting ways to permeate the air in your ride is with a little tin that has fragrant blocks inside. The brand I’ve had the best luck with was California Scents. To use, simply remove and set aside the plastic, cutout lid on top. The can itself has a pop-top lid. Once opened, a flood of fragrance follows. Replace the plastic lid and slide it under the driver or front passenger’s seat. For extra permeation, if you have a larger vehicle, pop one for the back of the car in a place it won’t slide forward and cause mayhem. 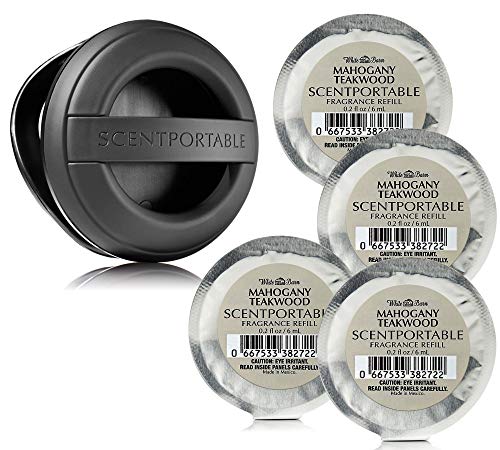 These air fresheners come in disk form. The plastic disk comes with a gel-based scent that has a metallic tab you pull off. They are designed to slide into a clip that is attached to your sun visor. Technically, you can throw these under a seat, too. But since there would be nothing on top to protect it, the disk would potentially get quite dirty. That would defeat the purpose. These also come in a variety of scents and can last for weeks, weakening over time.

This is another under-the-seat scent sharer that actually has two lives. To start with, they come in round jars with a mesh plastic lid and a pull-off seal underneath. The jar is full of squishy pearls full of scented aromas that are marinated in a bath of the same smells. Visually, it looks like a boba tea that is a special order for the boba obsessed. Upon opening, these beads continue to emit a nice smell until the whole jar dries up.

Don’t throw it out just yet, however. The beads shrink when they are dry, but if you pour water over them, life extends somewhat. A jar could last up to a few months.

There are probably as many air spray scents as there are scents of candles. In the cleaning aisle, you’re likely to be inundated with brands and types of smells. From chocolate to citrus and holidays to pumpkin spice, there is an air freshener for every nose.

The spray comes out fast and in vast quantities. It’s best to roll the windows down, at least somewhat, and spray the air over the seats and in the back. For most cans of spray, a little bit goes a long way. It’s also probably best if no one is in the car at the time of spraying. One hearty spray can last a few days before another quick spritz is necessary. 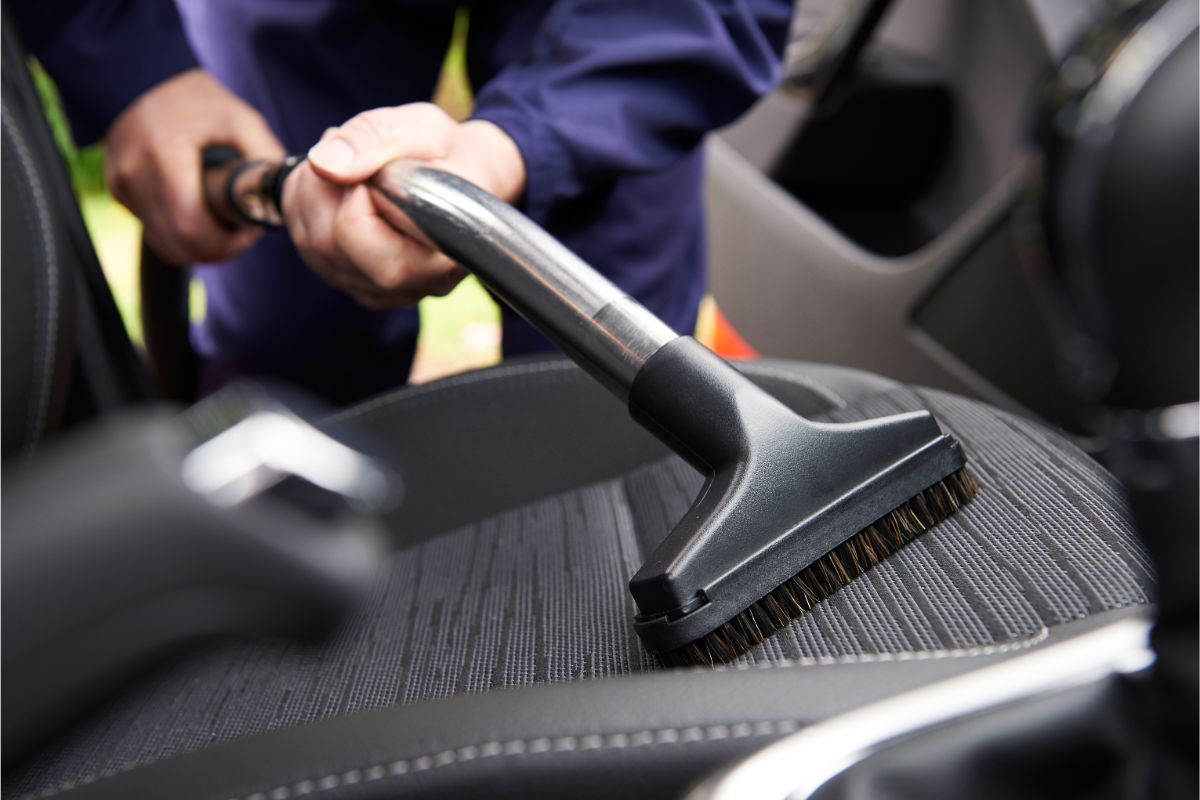 All the options so far have been passive. You put them out and they spread the smell of goods until they need to be replaced. Sometimes, though, your car requires a bit more TLC. If it’s been a long time since your seats were scrubbed, or if a drink or food item has taken a spill, the only solution to get a fresh-smelling interior again is to scrub it out. Some of these cleaners come with a scrub brush on the end to really get into the fabric and eradicate anything that could cause a stink. These, like the surface cleaners, come scented so you get the added bonus of a lingering air freshener.

Yes, this is about air fresheners, but this type of product has a dual function. The reality is, sometimes unfortunate odors are there for a reason. Depending on how much indoor traffic goes through your vehicle, it might be time to check the seats. If you find that your car is unable to stay neutral, get some scented multi-surface cleaner.

Products like Febreze will kill the odor and leave the fabric of the seat, and the rest of the car, with a pleasant aroma. All this takes is a spray across any surface, or air, you think could use a boost. In this case, the focus would be on the seats and carpet. So, what you have is a combination of a cleaner and an air freshener. Two for the price of one!