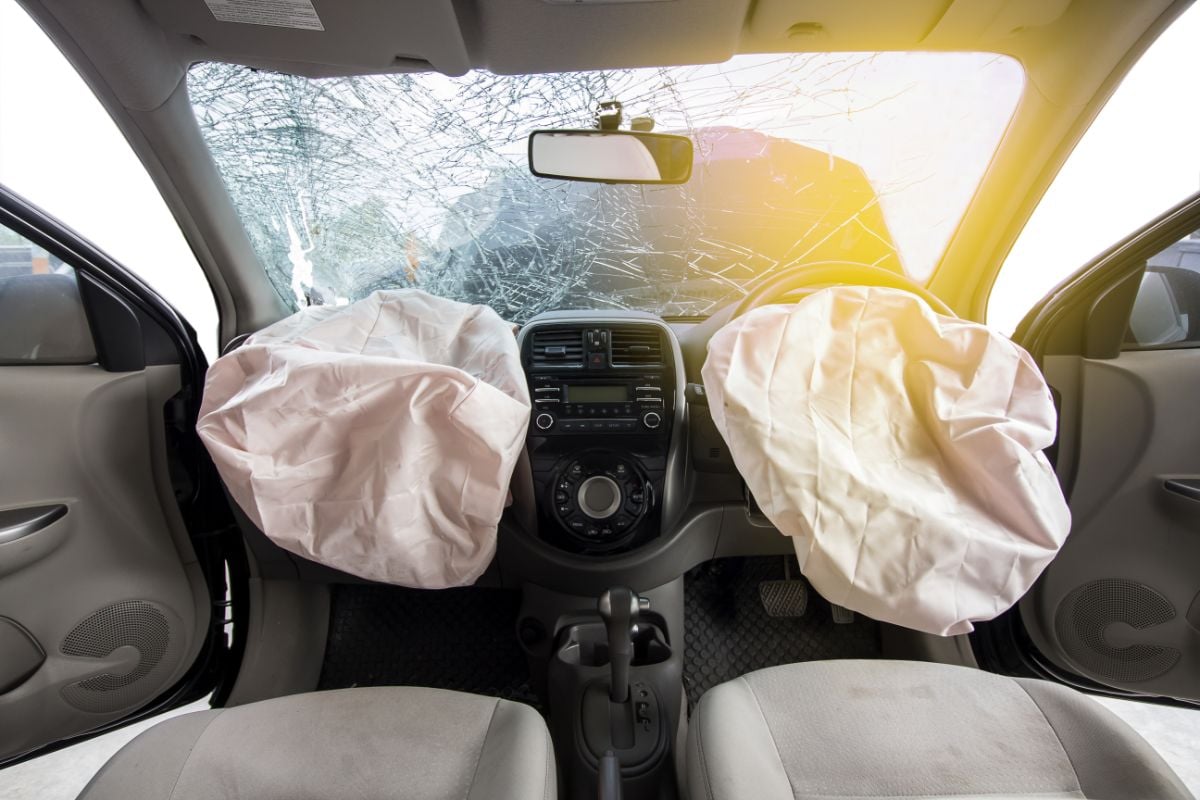 I used to underestimate the importance of airbags until I was involved in an accident. Were it not for the airbags in my vehicles, I could have been badly injured. According to the National Highways Traffic Safety Administration, airbags saved 50,457 lives.

Here’s what you need to know about airbags including their history, types, advantages, disadvantages, and other important information.

Vehicle Bot
Hello, how are you? Ask me anything about vehicles.
Contents Show
History of Airbags
Types of Airbags
1. Frontal Airbags
2. Side Airbags
3. Knee Airbags
4. Inflatable Seat Belts
FAQs
Can airbags be used after deployment?
What are the common airbag defects?
Why do air bags fail to deploy sometimes?
What injuries can airbags cause?
What is a moderate-severe crash?
How fast do airbags open?
What is the science behind airbags inflation?

Early cars didn’t have airbags. The inflatable cushions designed to protect vehicle occupants during a collision were invented in the 1950s and started being used commercially in the 1970s.

In 1951, German Walter Linderer held a patent for airbags. Linderer’s airbags were designed to mimic a compressed air system released by the driver or collision contact.

American John Hetrick also had the patent in 1953. His airbag was also based on compressed air. However, research in the 1960s revealed that compressed air was ineffective as it could not fill the airbags quickly. In the late 1960s, Allen Breed received the airbag patent. Breed invented the first automatic crash-sensing airbag system in 1968.

The first car with a passenger airbag was the 1973 Oldsmobile Toronado. It wasn’t until the 1990s that the United States required all cars and light trucks manufactured and sold in the country to have airbags.

Vehicles initially had only two airbags on both sides of the front seat. As years passed, different airbag placement positions were created, leading to the manufacture of different types of airbags, namely frontal airbags, side airbags, knee airbags, and inflatable seat belts. Below is a detailed explanation of each kind of airbag. 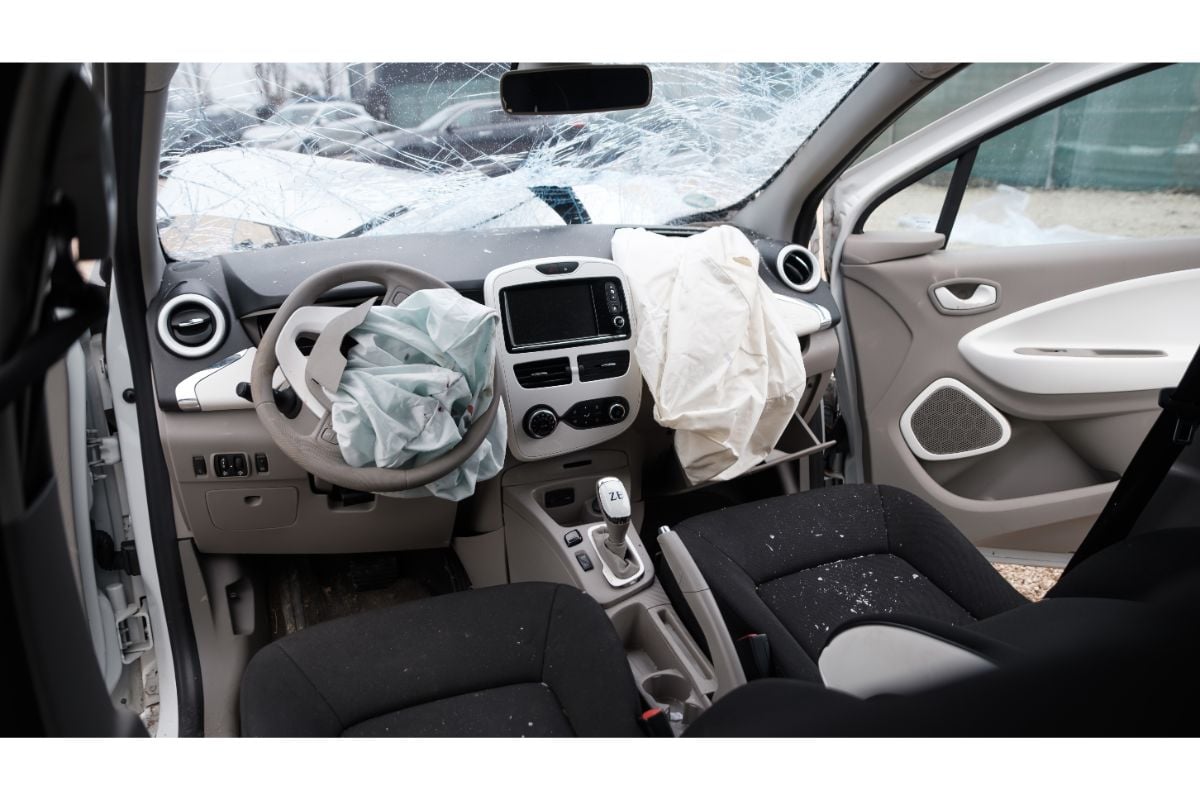 Frontal airbags were declared must-have requirements for all passenger vehicles in the United States in 1998. They were made standard vehicular equipment in all sport utility vehicles (SUVs), pickups, and vans in 1999.

Frontal airbags have various advantages. During an accident, they provide cushioning around the passenger’s head, neck, and spine. The frontal airbags limit the distance vehicle occupants’ heads can fling forward, thus lessening the amount of force impacting their heads during a collision.

The airbags also decrease the risk of projecting outside the car through the windscreen.

Despite being effective in protecting passengers during a collision, frontal airbags have their fair share of demerits. One disadvantage of frontal airbags is they can release harmful gases.

The fabric nylon used to make airbags is coated with talcum powder to release it from the steering wheel and dash easily. When the frontal airbags are released with force, the powder is also released and may result in asthma attacks, breathing problems, and other respiratory conditions.

Also, airbags deployment can sometimes result in fire accidents. Frontal airbags deploy following an ignition within the steering wheel that produces nitrogen gas to inflate them. In some instances, the ignition may react with gasoline fumes and other flammable materials in the car and cause fire, putting vehicle occupants at great risk.

The inflation force of airbags can result in severe injuries. That’s because the deployment of airbags can reach a speed of 200mph. If the airbags deploy at such a speed with a person’s face, chest, or any other body part near the steering wheel or dashboard, they can cause serious injuries.

Given the severity of these injuries, it is recommended that younger children, older adults, and pregnant women sit as far away from the front seats as possible.

Advanced frontal airbags were introduced in 2004 to help reduce the number of injuries caused by frontal airbags. These modern airbags have a sensing system that senses when how much speed to use when deploying airbags based on the signals it records during the incident.

The signals include the occupant’s seating position, safety belt use, body mass, and extent of the crash. 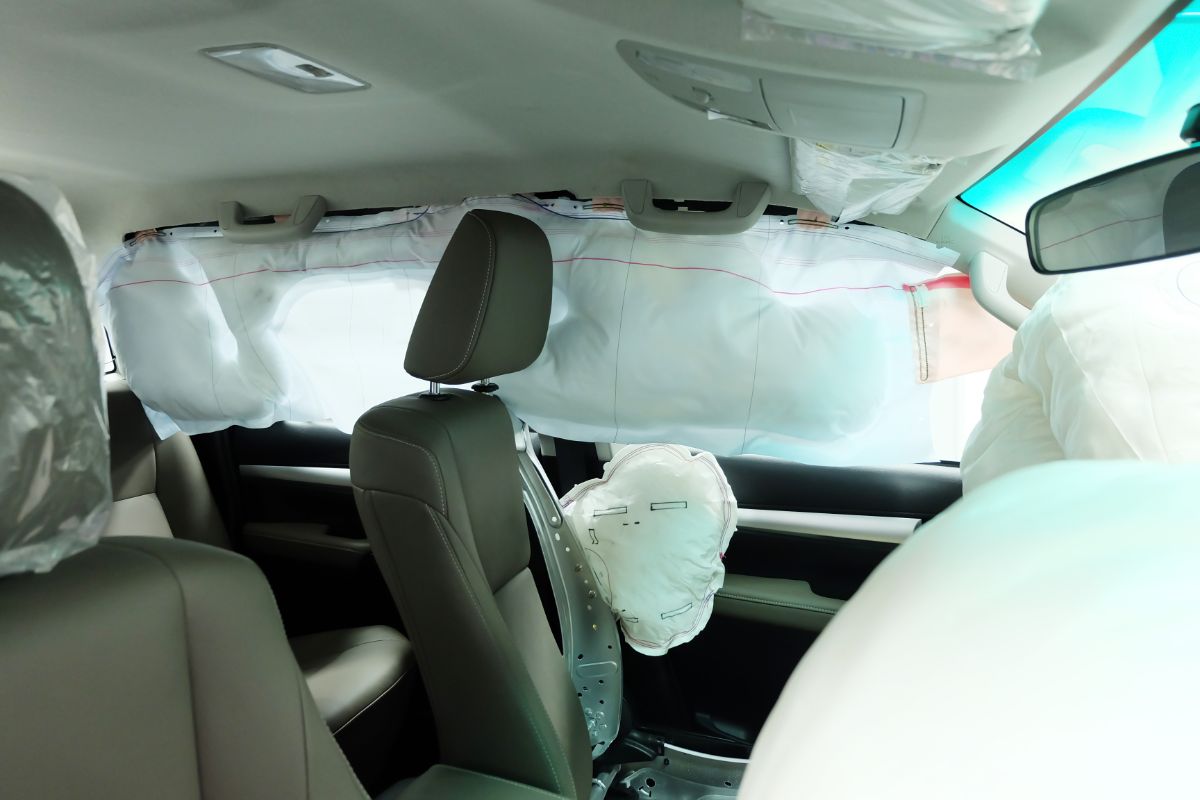 Side airbags are a type of airbags placed in the seat or door panel. Based on their position, there are two categories of side airbags, namely side torso and side curtain airbags.

The side torso airbags, otherwise known as side-impact airbags, are positioned in the door panel or the seat. They inflate between the seat and the door. They are advantageous in reducing injury to the lower abdomen and pelvic regions of the body.

Many modern vehicles have side-torso airbags to reduce ejection and severe injuries in rollover accidents.

The curtain airbags are placed on the window panel. During a collision, curtain airbags unroll and inflate to protect passengers against side-impact crashes like t-bone collisions or crashes with trees and other side objects. They provide cushioning between the car occupants’ heads and the side windows.

The third type of airbags is knee airbags, and the first one was installed in the 1996 Kia Sportage fleet of cars. These airbags are placed on the lower dashboard and are designed to deploy during collisions to prevent knee and leg injuries.

They may also reduce injuries on the driver and passenger’s chest and abdomen by regulating the occupants’ lower body movement.

However, knee airbags have a major disadvantage. According to the Insurance Institute for Highway Safety (IIHS), knee airbags are associated with increased injuries to the knees, legs, and right femur.

The following are frequently asked questions about airbags:

Can airbags be used after deployment?

After deployment, airbags cannot be reused. The only solution to deployed airbags is replacing them. It is advisable not to drive a car with deployed airbags as it increases the chances of severe injuries during an accident.

What are the common airbag defects?

Airbags have various defects, which include

Why do air bags fail to deploy sometimes?

Airbags are not designed to deploy in all collisions because the deployment is based on various factors. These include the location of the collision sensors in a car, the airbag system of a particular vehicle, and the characteristics of the crash like speed, impact direction, and more.

As such, airbags usually deploy if the collision sensors are triggered with crashes above the threshold force. Your airbags won’t deploy if:

What injuries can airbags cause?

What is a moderate-severe crash?

Moderate to severe crashes refer to collisions equivalent to a solid stationary barrier at 14mph or higher. Frontal airbags won’t deploy if the crash is below this threshold.

How fast do airbags open?

Since airbags are meant to provide immediate protection during a collision, they open at a speed of 200mph to open and fill in milliseconds.

What is the science behind airbags inflation?

Airbags are filled with a compound called sodium azide. Cars with airbags have collision sensors that send signals to an ignitor within the vehicle in case of a medium to severe crash. The ignitor produces heat which breaks down sodium azide into nitrogen and sodium metal. The nitrogen quickly fills the airbags.