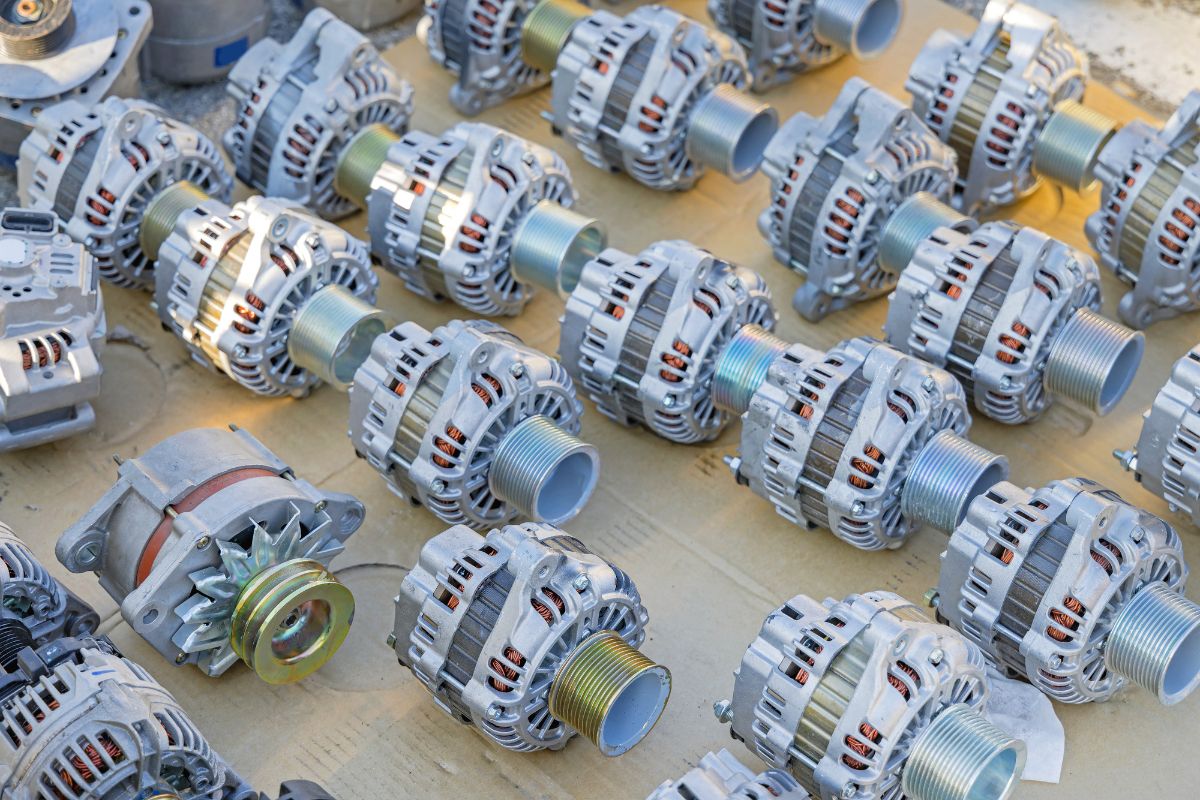 I still remember running through the rain to my car, getting soaked, but needing to get some supplies. I finally got in the car, turned the key to start, and heard “click-click-click.”

I thought it was the dreaded dead battery, but I discovered the battery was fine after some inspection, and the alternator was at fault.

If you are like me, you never consider how hard the alternator works and how you know when it doesn’t. The battery does not get charged when an alternator fails and eventually runs down to the clicking sound.

So, this article is to explain all the different types of alternators, how they work and why they are so important.

What is an alternator?

Or, in plain speak, it takes energy from the power of a running engine to produce electrical power for the vehicle and recharge the battery.

The alternator performs vital functions for the proper functioning of a vehicle and is easy to overlook until the unit fails. Then sitting in a parking lot with a dead battery will tell you it is too late to check how it works.

So always pay attention to any telltale signs discussed further in this article on how to be prepared.

What are the different types of alternators?

There are five basic types of alternators, depending upon their design and application. The classification type is based upon the following types of applications: 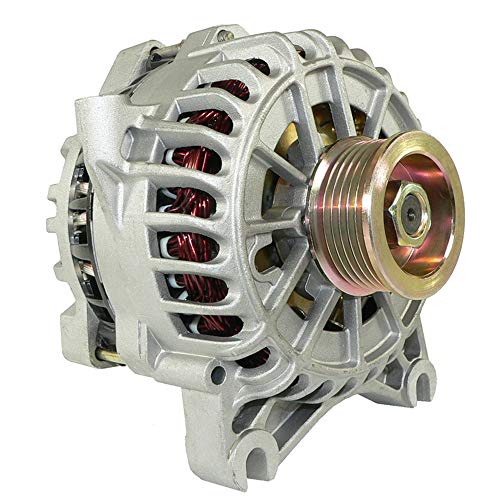 The automotive alternator generates electrical power by being bolted to the engine and driven by a serpentine belt or drive belt that rotates the alternator pulley. This type of alternator is used for almost all combustion engine vehicles and some specific hybrid vehicles.

We seldom think about the alternator until the “click-click-click” sound appears. Then, when the vehicle does not start, we pay attention. The alternator’s primary function is providing power to charge the battery.

Still, when the alternator fails, the battery may run the engine for a short time, but it too will eventually be depleted and fail.

What to check for a bad automotive alternator?

The most typical indication of a failing electrical charging system is the iconic warning light shaped like a battery. There may also be an icon with the letters “CHARGE” appearing.

It may indicate either a failing battery or a bad alternator, especially if the lights do not go off after starting the engine. If the warning lights remain on, it indicates a problem with the vehicle’s charging system.

What to look for when the battery warning light comes on? Do the headlights become brighter when the engine is revved?

Fluctuating headlight brightness may indicate a bad alternator, weak battery, loose battery connections, or a serpentine belt that is worn or loose.

Do you hear a buzzing or whining sound from the alternator?

A failing alternator will often have a whining sound indicating worn bearings, or the alternator pulley could be defective. 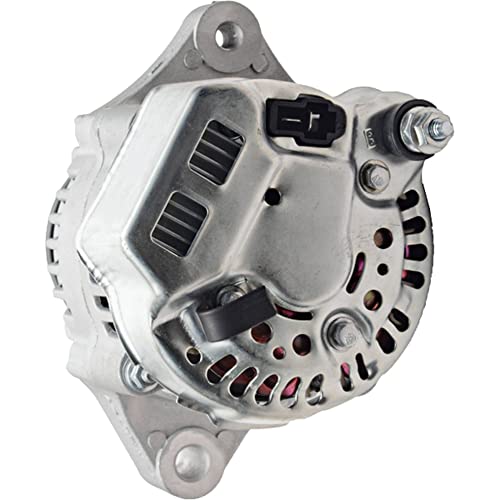 Diesel-electric locomotive uses traction motors, or electric motors, to drive the locomotive. The power for these motors is derived from a complex electrical system, with the alternator being the heart of the electrical power.

An auxiliary alternator generates power distributed throughout the train, including passenger cars, for powering lights, air conditioning, and other necessary passenger services.

The electric traction motors utilize alternators for power to drive the train due to the efficiency of AC alternators. Alternators produce AC power much more efficiently than generators that generate DC. 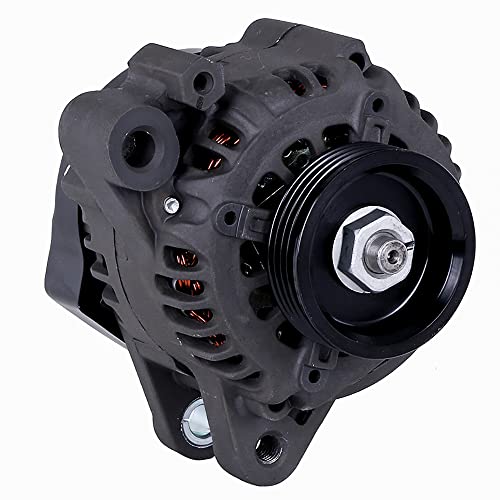 I can attest to the importance of having healthy marine alternators from firsthand knowledge. On a hot day in the middle of a lake, a dead battery when the marine alternator fails to keep it charged is not a fun deal.

Local calls for help when stranded on the water in a dead boat are not the same as sitting on the side of a road in a stalled vehicle calling the local garage. Make sure you are prepared and have enough ice on board the stalled boat for all the drinks!

Marine alternators are usually found in yachts and similar vessels with engine compartments and are comparable to automotive alternators. The marine alternator has design modifications specifically for working in salt-water and fresh-water environments.

Alternator durability is essential when large yachts may have two or more alternators to generate enough power for all the ship’s energy requirements.

An alternator must be certified explosion-proof for vessels with inboard engines for marine environments. For yachts and larger ship types, the alternator is explosion-proofed to ensure there is not any brush sparking in the engine compartment where explosive fumes may exist.

The alternator also has to have components, such as bearings, designed for harsh, corrosive salt-water environments. 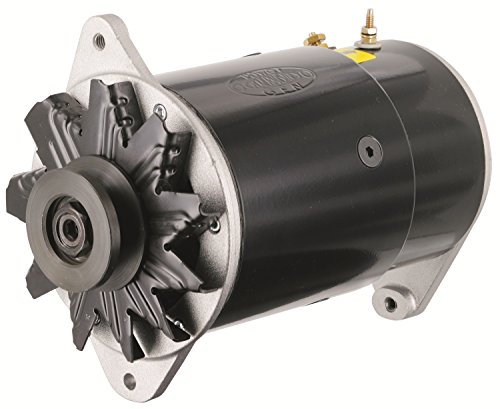 Alternators that have two spinning rotors to produce electricity without carbon brushes are known as, and you guessed it, brushless alternators.

Brushless alternators create electricity with two rotors spinning and a small generator at the end. The electricity then is converted to an electric current for power.

With a more efficient design, a brushless alternator is typically used in applications requiring long-term use as a power generating system requiring high up-time.

Now, let’s take a look at comparing a brushless and brushed alternator. 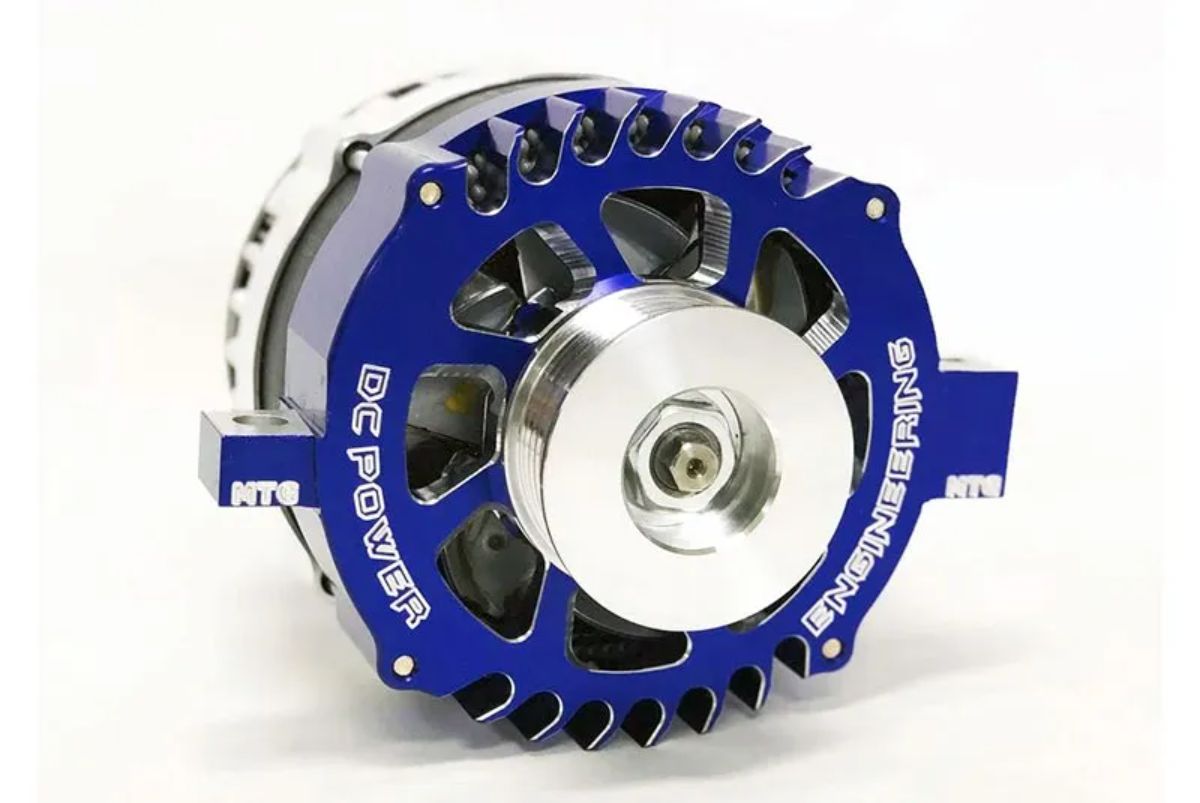 The Alexanderson Radio Transmitter was a breakthrough alternator technology in 1904 developed by Ernst F.W. Alexanderson, an engineer at General Electric.

The Alexanderson radio alternators provided the necessary power to transmit international radiotelegraph communications from 1904 to 1918.

The Alexanderson 200kw Radio Transmitter created many technological milestones, including:

However, reportedly functioning, there is still a working Alexanderson alternator in Grimetown, Sweden!

What are the differences between an alternator and a generator?

Their primary differences are the methods used to generate electricity. Both devices take mechanical energy and convert it into electrical power.

Typically, alternators are internal devices found most often on vehicles and designed to run the engine, recharge the battery, and provide adequate power to run the vehicle’s electrical components.

A generator is usually an external device and is used as a primary electrical power source when it is engaged. For example, a generator can be life-saving when a storm knocks out a home’s power on an extremely cold or hot day.

Or, when a hospital’s power is lost, the generator can be large enough to provide adequate power to continue operations.

The significant differences between an alternator and a generator are:

What is the difference between AC and DC electrical power?

Sometimes it can be confusing what the differences are between AC and DC power supplies and electrical power output and how they may be applied differently.

For example, although an alternator creates AC power, within the alternator are complex circuits that convert AC to DC power output.

The primary difference in this discussion is that DC power is typically stored in batteries used in vehicles. In contrast, AC power is transmitted commonly by power distribution lines to homes and businesses.

A typical vehicle battery has both negative and positive terminals. Charged electrons flow through a conductor traveling from one terminal to the other.

The sealed lead-acid battery typically found in most vehicles stores DC from an alternator in a set of six cells creating 12 volts. The battery’s power and capacity vary depending upon the vehicle’s power requirements.

Newer vehicles, especially EV (Electric Vehicles) or Hybrid (combination of gas combustion and electrical motors), have lithium-ion batteries. The significant advantage of using lithium-ion batteries is the higher storage capacity and up to ten times the life of a lead-acid battery.

The advantage of DC batteries for vehicles is delivering a quick burst of high amperage energy to crank and start an engine. This burst of power is most welcome on those cold mornings when the engine and outside temperatures are frigid.

Typically, lead-acid batteries are rated at amp-hours of cranking for a vehicle’s engine, each battery designed for specific requirements. For example, mid-size batteries may be adequate for large cars and SUVs with 50 amps-hours, but large trucks may require 75 amp-hour batteries.

A lead-acid battery will slowly discharge, and cranking amps drop until you hear the dreaded sound of an engine not getting enough power to start.