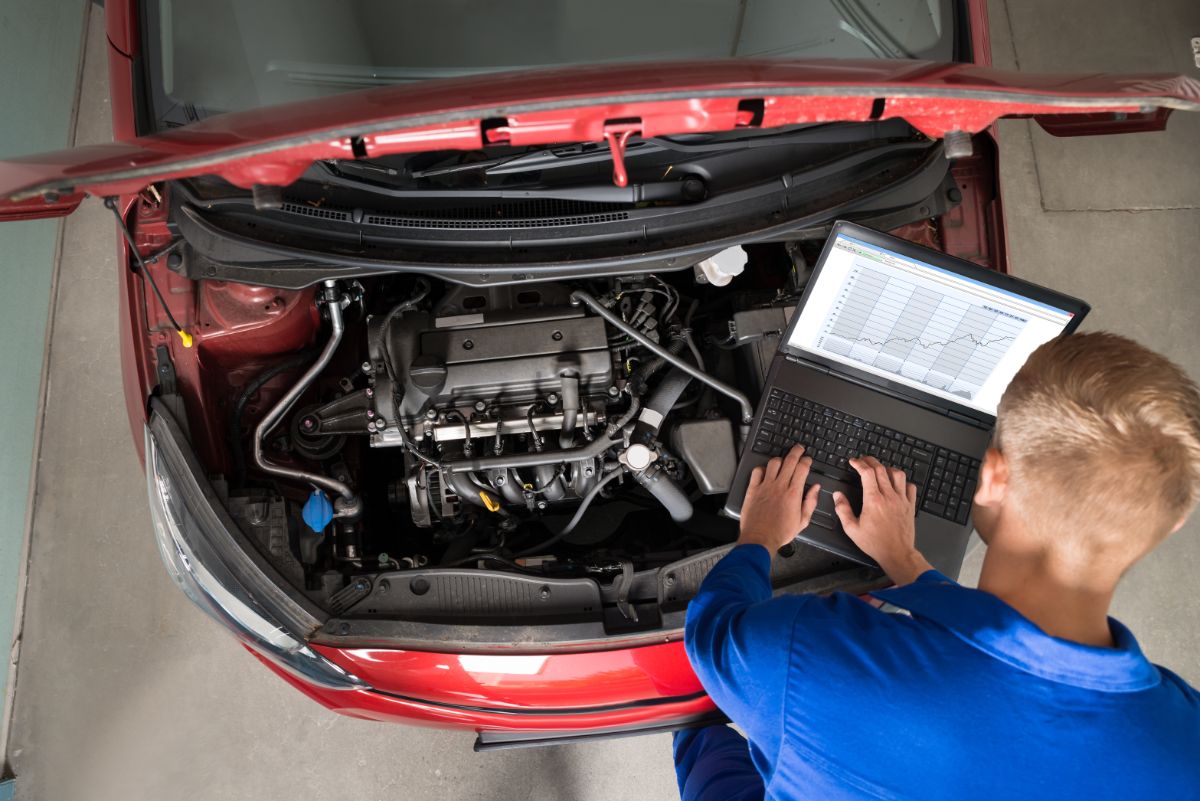 I’ve been driving along, the tunes cranked up, checking out the scenery, laughing at funny bumper stickers when all of a sudden the dreaded orange “check engine” light comes on.

Now, I’m no car mechanic, nor do I understand much of what happens under a hood, but I do know that the orange light means trouble. Expensive trouble.

Most times it’s not so bad; other times he’ll tell me I need a new car. I throw up my hands in the air and swear I’m going to buy a horse.

What are automotive diagnostics? In what systems do they warn of trouble? What are the benefits of having diagnostic tests run on your car?

What Are Automotive Diagnostics?

A diagnostic test evaluates the systems in a car for issues or what has made the check engine light light up. Computers have been installed in cars since the late 1970s. They monitor the car’s systems and run some of them.

The computer is loaded with codes for different systems and/or the problems inherent to each. A technician will tap into the computer, read the codes, and then he’ll know what’s wrong with the car.

What Systems Does The Computer Monitor? 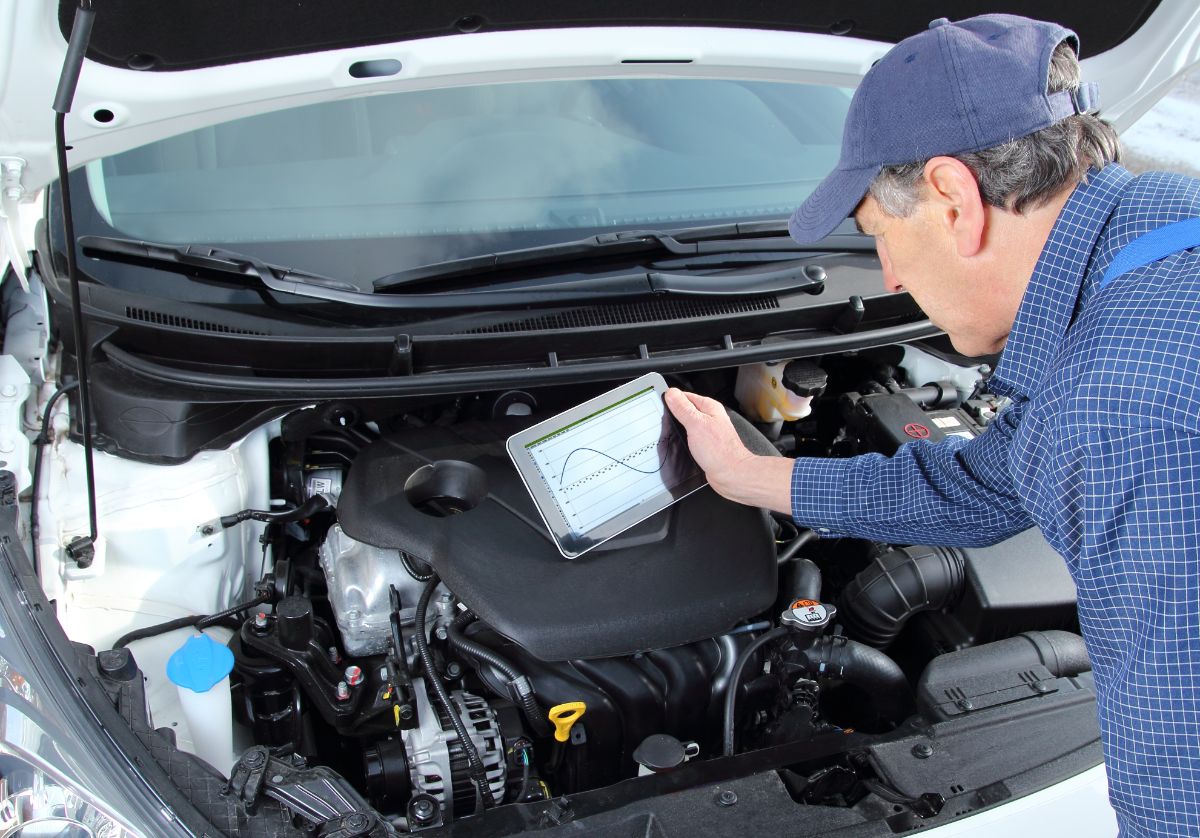 There are separate lights on the dashboard warning center for low water in the radiator (the engine is getting hot,) the oil is getting low, the battery needs help, the brakes need checking (most often the handbrake is on,) or the anti-lock braking system or ABS needs checking.

These are separate from the car’s systems, and the driver can take care of them.

The computer monitors the engine and its various components, like the oxygen sensor, the air pressure sensor, temperature sensor, throttle sensor, and many more sensors.

It also oversees the car’s transmission, the brakes, the responsiveness of both of these, as well as the exhaust system. The fuel injectors, ignition coils, and throttle may show some wear and tear or just plain break. The computer will pick up on that.

Types Of Diagnostic Tests For Cars

Computers are only one of the types of diagnostic tests for cars. How were problems diagnosed before computers came along? Eyes and ears, that’s how.

Car mechanics asked the drivers what the problem was, took the problem car for a test drive, and then used the hard-learned tricks of the trade to make the problem go away. 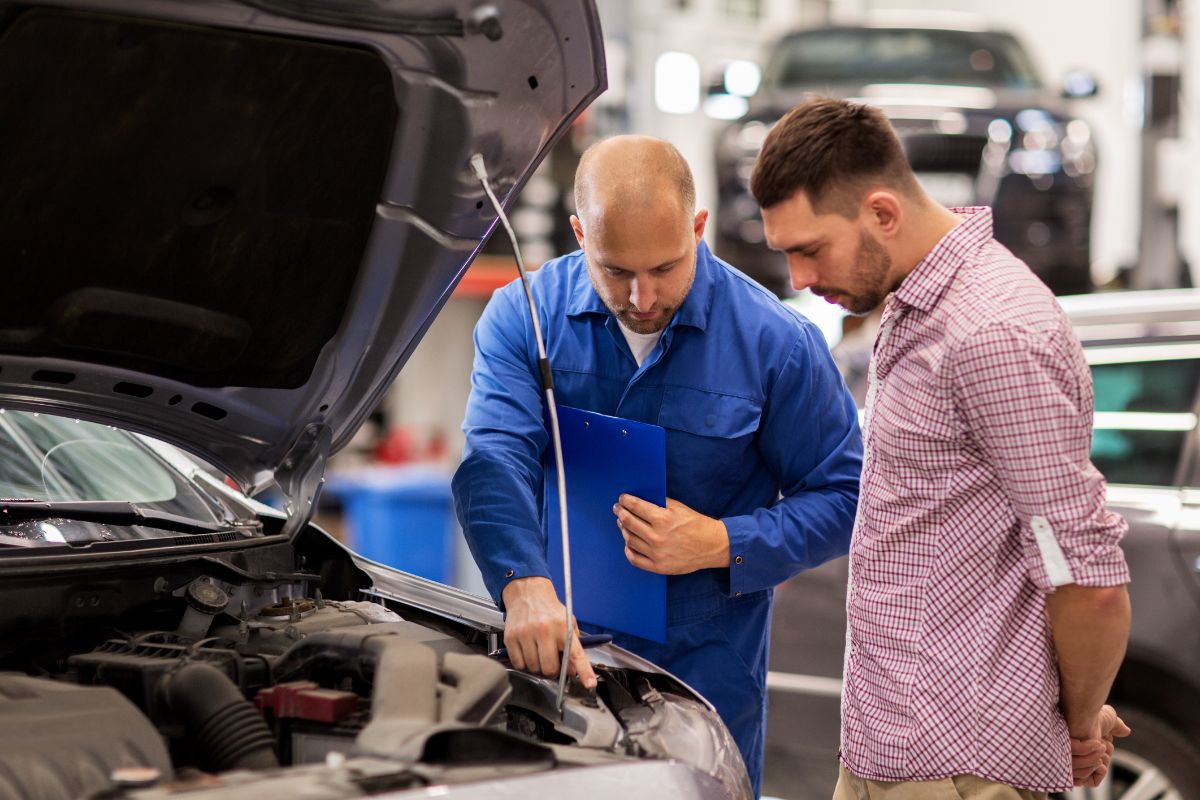 If you and I saw a TV ad featuring a driver explaining the weird sounds his car was making to a mechanic, and he was going “pocketa, pocketa, pocketa,” then we’d switch channels as we shook our heads.

On the other hand, how many car mechanics do you know who would know exactly what that sound meant? A bunch, I’m guessing. A driver knows his ride inside and out. He knows when it’s feeling sluggish and when it’s ready to rock.

He knows every squeak and squeal. When he makes the sound for his mechanic, he knows that it’s a true representation of the problem. Mechanics understand this.

They also know within certain areas where a sound like that can originate. Mechanics also understand which systems make what sounds.

So, customer consultations are one of the most important diagnostic tests, because they zero in on the area of the car presenting a problem. They are sometimes just as accurate as a computer diagnostic test.

Customer consultations can tell a car mechanic more than just looking at a heap of metal. That’s an important benefit of car diagnostics.

The only disadvantage would be when the car owner can’t succinctly explain the noise, smell, or shaking going on. Vagueness leaves the mechanic with little to no idea where to look.

One of the ways auto mechanics diagnosed problems in cars before computers was the road test. The owner would explain the problem and the mechanic would test drive the car.

If he heard the sound or felt the problem, then he would know what to fix. The mechanic would then test drive the car following the repairs to make sure the car performed well.

This is done for a very good reason. Both driver and car mechanic know how a car in peak performance feels and sounds. When the smallest thing happens to tip that balance into not peak performance, both know it instantly.

Another good reason for a test drive is so that a mechanic can make up a grocery list of problems with the car the owner might want to address.

He’ll feel or hear things other than the problem the owner told him about, things that throw the car off its game. These should be addressed before they become major problems or cause an accident.

The benefits of the test drive are detailed above. Hands-on testing the car is a good way to get the feel of the car and whatever its problems.

The only disadvantage of road testing a car is that sometimes the problem isn’t evident to the mechanic. Then he must dig to find both the problem and the answer. 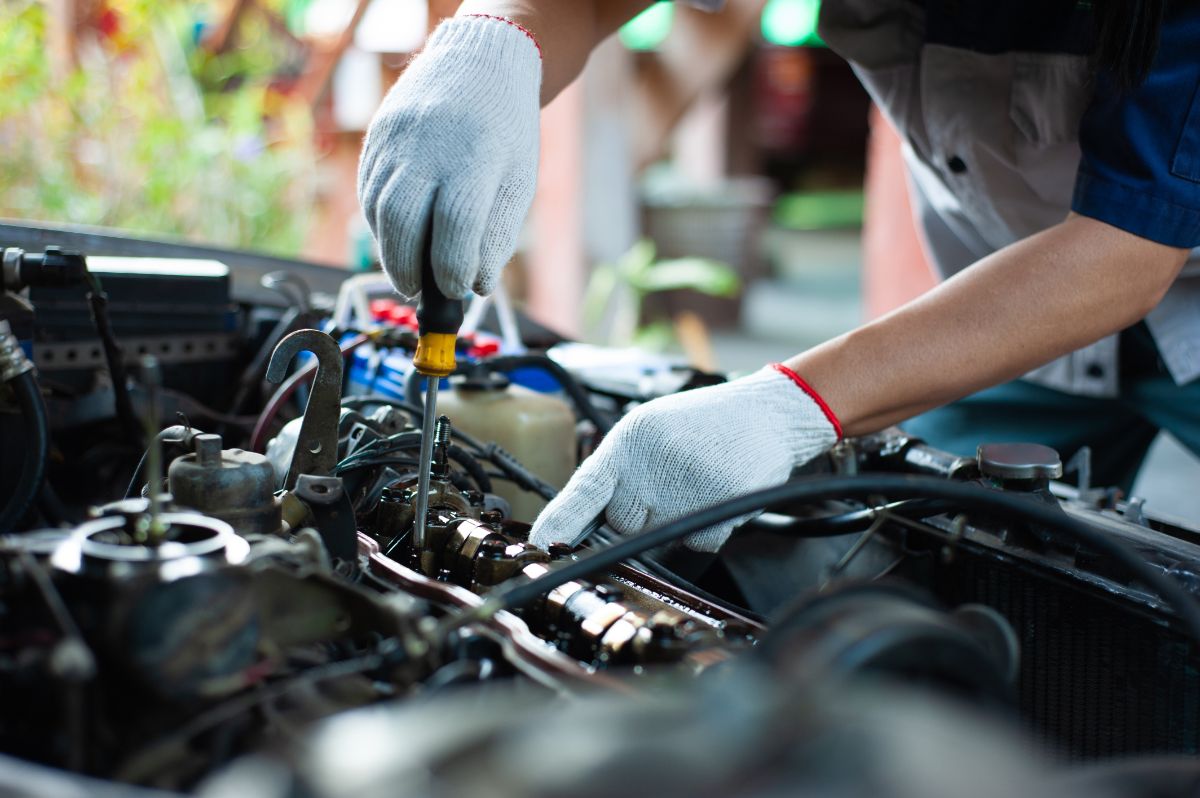 Auto mechanics are much like doctors and lawyers in that their education never stops. There are new techniques for identifying problems stemming from new technologies or even from old cars developing new problems.

Not only that, but mechanics must have hands-on experience at mechanics’ school. Here, they learn to find the problem and fix it.

Mechanics must be certified in a dozen different things. That means they’ve studied these things, worked on them in workshops and learned how the machine works.

There are also different levels of certification (two of my sons are auto mechanics: one certified, one a “shade-tree” mechanic) for which the mechanic must have gotten his hands dirty working to solve the problems.

In all this hands-on work, mechanics pick up or are taught by master mechanics how to find the basis of the problem instead of fixing just the symptoms. They are either taught or intuit how to get past the symptoms to get to the gist of the thing.

When computers, customer conversations, and road tests don’t illuminate the problems, the mechanic with training and hands-on experience often can. That’s a pretty important pro.

There really aren’t any cons, so trust your mechanic.

If you have pain that prevented you from sitting up straight or caused you to walk with a limp, you should see a doctor.

He’d diagnose the problem and either give you pain pills or send you to a chiropractor to repair the cause of the problem. It’s the same with your car.

Your car protects you from the elements, other drivers’ erratic movements, and it gets you where you need to go. This is especially important if your children or your elderly parents are along for the ride.

Whatever goes wrong with the car needs to be fixed pronto for their sake as well as yours.

The benefits of car diagnostics include:

• Time. Repair times are decreased. Your car won’t be in the garage for long, and labor costs will be reduced.

• Training. Auto mechanics are highly trained in testing for problems and spotting what should be repaired.

• Cost-effectiveness. Diagnostic tests are the most efficient and cost-effective method of diagnosing a car’s problems.

Before the 1960s, cars had no electronic packages or computers. Mechanics dug around to find the problem, road-tested the vehicle, fixed the problem, then road tested it again to make sure they caught everything.

That was until Volkswagen put the first onboard diagnostic or OBD system with the ability to scan for problems in their cars in 1968.

Ten years later, Datsun (now known as Nissan) did the same. A year later, in 1979, the Society of Automotive Engineers or SAE, recommended a dedicated diagnostic connector along with a series of diagnostic test alerts.

Now it’s the 1980s when the “check engine” light was introduced. Nineteen eighty-eight saw SAE standardize OBD across the board. By the ‘90s, computers ran our cars.

By 2008, all American vehicles were required to use OBD-II through a specific network control system.

How Often Should You Have Your Car Diagnostic Tested?

Most preventive maintenance of anything you care to name should be done at least once per year. However, some automotive issues can sneak up on you, so twice per year is a better idea, especially if your “check engine” light comes on.

What Happens After A Code Read?

A diagnostics technician will give you a printout of the code results. He’ll evaluate the results and tell you which problems are a priority and which can wait a bit.

How Long Does A Diagnostic Test Take?

Since the test is of the car’s complete systems, the scan, analysis, and printout can last from 15 to 30 minutes.

Does My Vehicle Have OBD?

If your vehicle was made after 1996 and is a gasoline-powered vehicle, then it has OBD. If your car is older, then it might have some earlier version of OBD, but the connection and codes could be different.

Can You Turn Off The “Check Engine” Light Yourself?

Can You Repair An OBD Problem Yourself?

No, only a trained and certified diagnostics technician with the correct equipment can repair an OBD problem. Ask to see the technicians’ certifications to be sure.

Can The “Check Engine” Light Break?

Everything breaks at some point in time. However, never assume the “check engine” light is broken unless a certified diagnostics technician says it is. You don’t want a serious problem with your vehicle to become more serious or cause an accident.

Can You Drive With The “Check Engine” Light On?

You can, as long as the car isn’t driving weirdly. However, whatever made the light come on could end up being serious, so you want to check it out as soon as you can.

What If Your “Check Engine” Light Is Flashing?

A flashing light is an indicator of potential damage to the emissions control system. It could mean future costly repairs.

Is There A Difference Between The “Check Engine” Light And The “Service Engine Soon” Light?

Not really. They mean the same thing. The onboard computer has sniffed out a problem, so you should get to your mechanic as soon as possible.