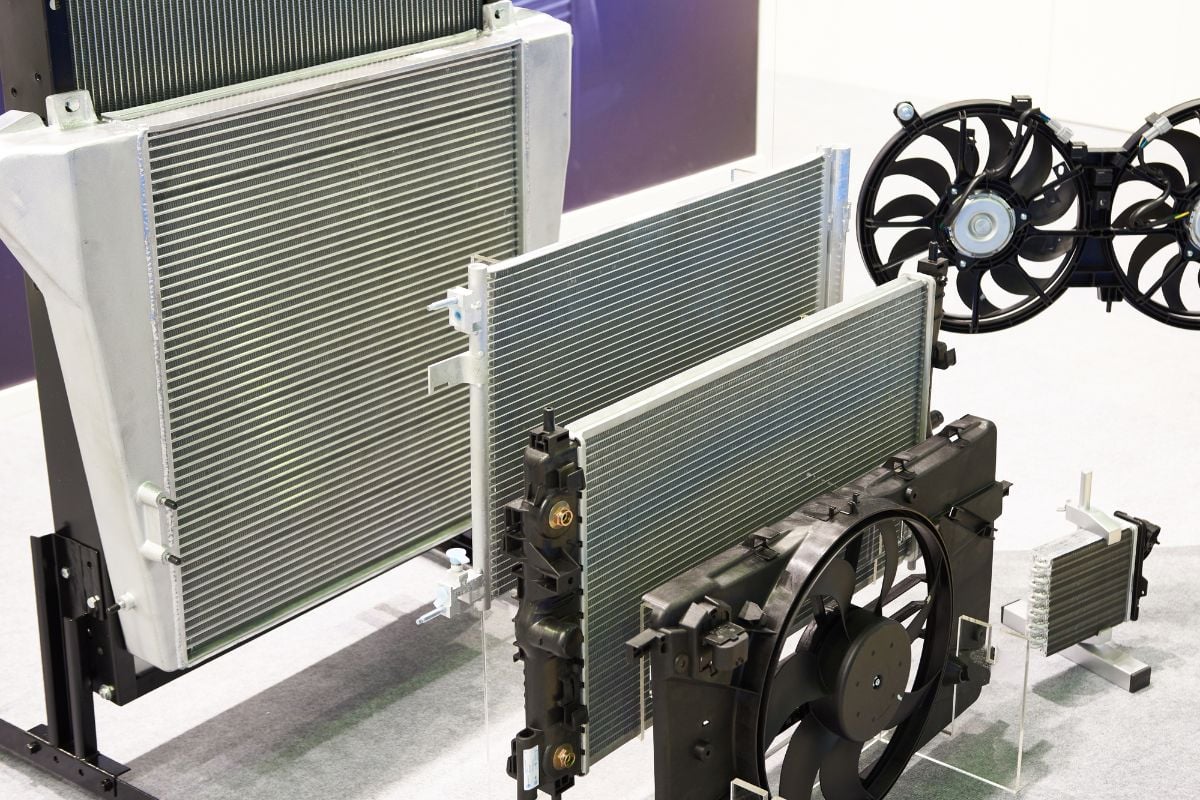 Have you ever had a radiator overheat on you? Not a nice experience.

I was on a lonely road and I blew a head gasket, back when I didn’t know better and it made me learn that as a female I should know about my vehicle and get it serviced often.

Now that I’ve learned my lesson, I want to help you take mitigation measures by learning about the different types of radiators for vehicles, their benefits, and the works.

Types of Radiators for Vehicles

There are two types of radiators, Downflow and Crossflow. These are broken down even further into three categories: triple pass, dual-pass, and single-pass radiators. 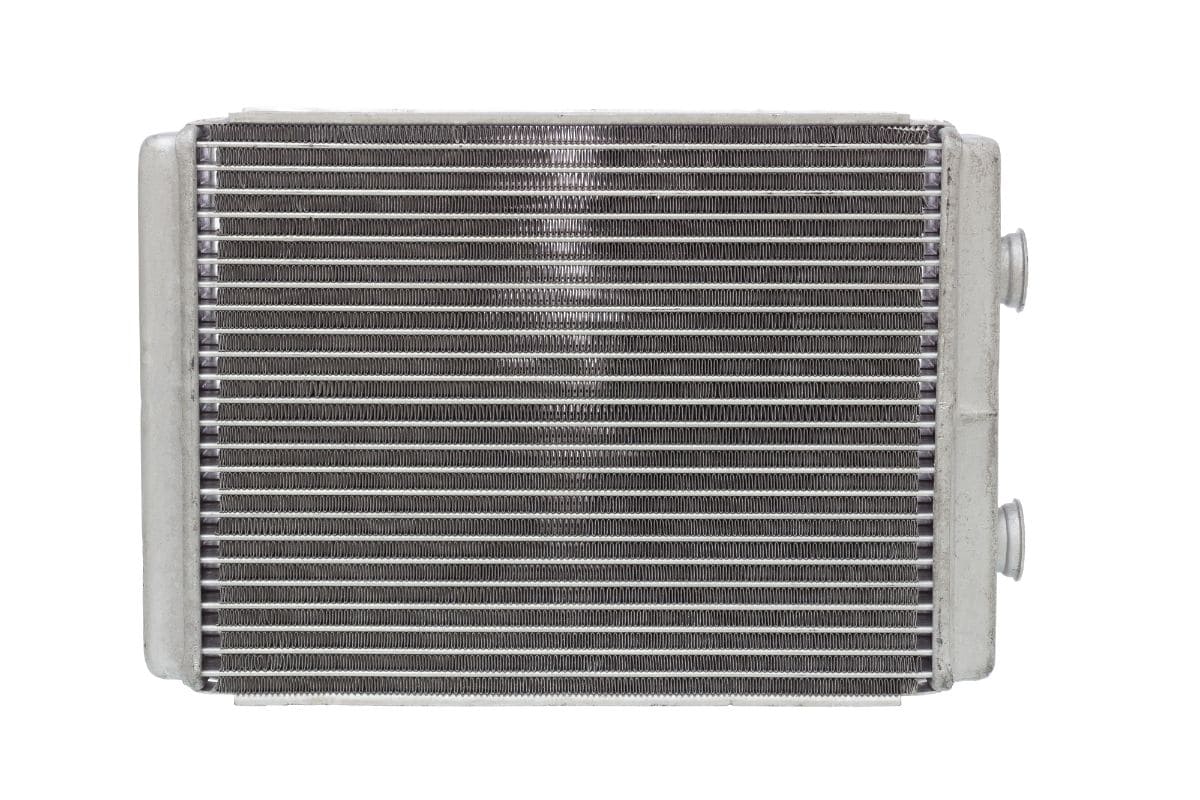 The tanks of a cross-flow radiator are located on both sides of the core. The coolant circulates from the right to the left side of the core.

For vehicles with a low bonnet line or a current little car, this kind of radiator is an excellent choice. The tanks are oriented vertically, whereas the core is oriented horizontally.

On a crossflow radiator, its liquid moves from right to left across its center. The low-pressure sure side of the tank can be used for the radiator cap on this sort of radiator.

When you’re running at high RPMs, this helps relieve some of the pressure on the cap. Crossflow radiators are often available in single, double, as well as triple pass configurations.

As a result, the liquid can be warmed and cooled multiple times. You’ll notice that your body temperature drops by as much as twenty degrees.

The radiator’s ability to separate the fluid that needs cooling from the fluid which has already been cooled allows for the double or triple pass.

The bigger crossflow radiator should disperse greater heat, keeping your cooling network even more functional if you’re worried about that aspect of your car’s design. 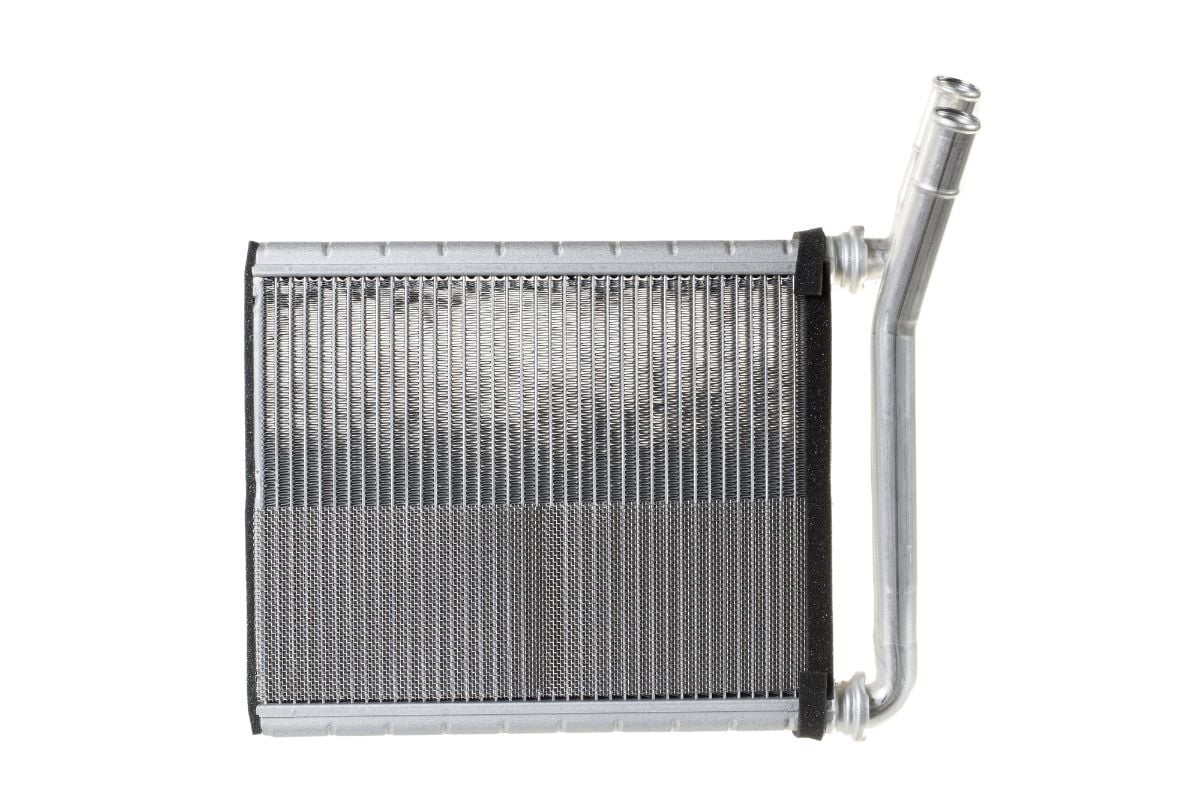 Many vintage cars have a downflow radiator. The core is vertical, the tanks are horizontal. The top tank is filled with coolant. Flow is assisted by pump pressure and gravity. The radiator is under pressure as a result of the airflow.

Through the use of tubes and fins, the coolant dissipates heat, which is subsequently dispersed into the surrounding atmosphere. The bottom tank is where the cooled fluid is stored. In the engine, it is recirculated back to the combustion chambers.

Which is Better: Down Flow or Cross Flow? 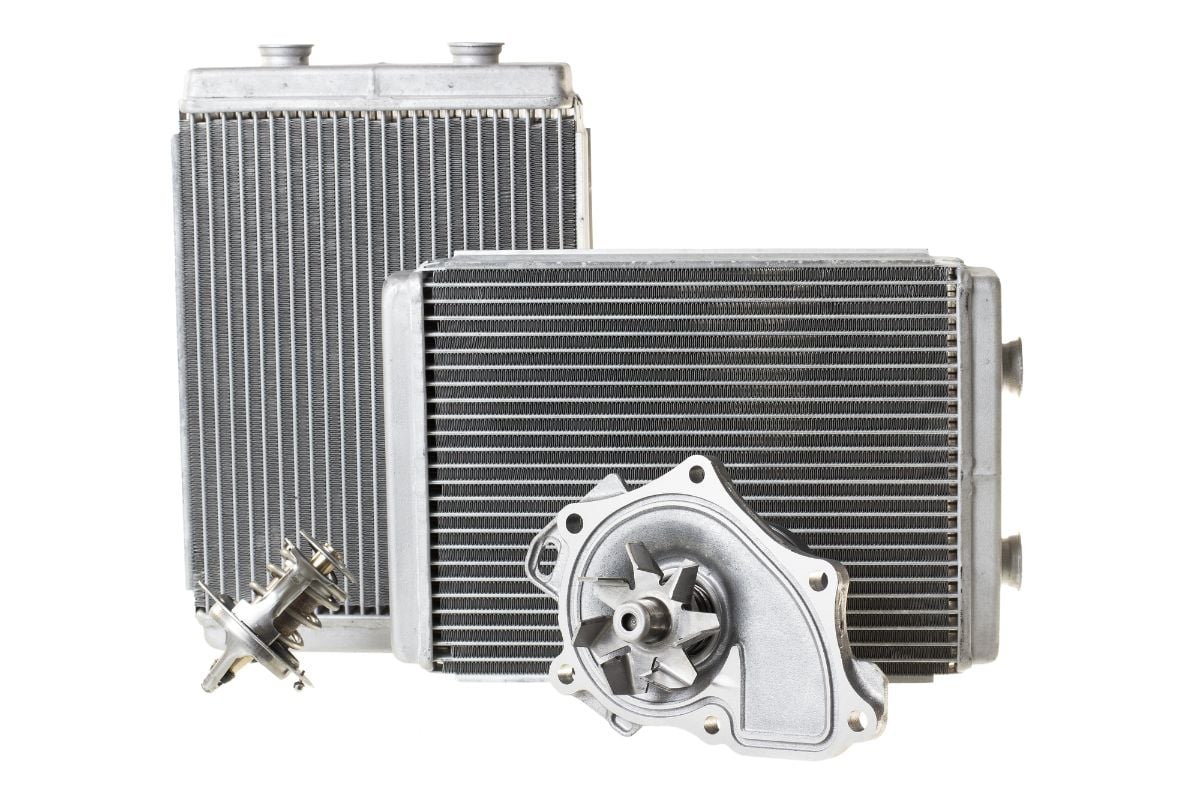 It’s important to pay attention to the vehicle’s grill and hood first. One of the other types of radiators may not be compatible with the design.

There are two types of radiators: downflow and upflow. Radiators with a crossflow design are often shorter and wider.

If it fits, custom fabrication will be required to go from one type of radiator to another. The simplest option is to use the vehicle’s original radiator.

It’s as straightforward as the name implies. The intake and output of a “single-pass” radiator are on different sides of the center.

Flowing from the intake to the output, the coolant passes through the core once.

The intake and outflow of a dual-pass radiator will be located on the same side of the radiator.

Since each side of a dual-pass radiator design has a greater flow rate, more coolant turbulence is generated, which improves heat transmission.

In most cases, a dual-pass radiator can increase cooling efficiency by up to 15%. When it comes to the number of rows in the core, the general rule of thumb is to choose the thickest radiator possible.

There are, however, two opposite parts to this type of radiator. On the first side, a slender core facilitates air movement. Some believe that as the number of rows increases, the rear rows are exposed to the heat generated by the front rows as airflow moves through the room.

As long as the airflow is enough, increasing the surface area (rows/thickness of the core) should not be a problem.

If the application can handle it, I always go big and thick with the cores. I’ve never regretted it. The thermostat should be able to manage the coolant temperature if you go a little extreme.

When cooling is a top priority, the ideal configuration includes as much frontal surface area as doable packed into the thinnest pack attainable.

However, if this isn’t possible, the solution is to increase the number of rows and/or fins. Using a high fin count instead of a thicker core generates a more dense core, which may be preferable if you can get away with it.

Radiators with three passes are now readily available. As the liquid moves from top to bottom of the radiator, maximum heat dissipation is ensured by a triple pass radiator.

Features like a furnace brazed tank, two rows of one-inch tubes with an overflowing filler neck, billet machine filler neck with overflowing overflow, standard one and three quarter inch outlet in a global fitting that accepts an inch and a half basic hose, -20 or -16AN connections are included in these radiators.

Different types of automotive radiators are used for a variety of purposes, and each performs differently. Let’s have a look at them. 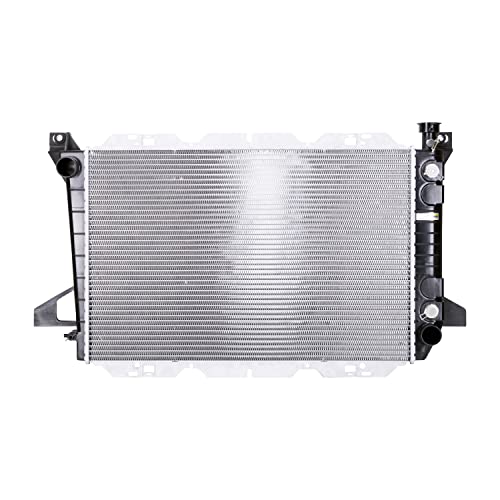 In terms of the many types of automotive radiators, plastic and aluminum radiators have an aluminum core and a plastic tank.

Car manufacturers mass-produce this radiator type, making it the most popular in today’s vehicles. 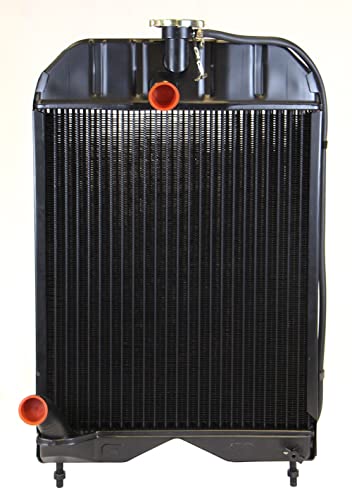 Copper and brass radiators were standard parts in all autos until 1980, with brass tanks and copper cores. Radiators made of plastic and aluminum have taken the place of copper since copper is both expensive and prone to corrosion, resulting in significant repair expenses.

Up until 1980, brass and copper radiators were enormous and cumbersome, but technological breakthroughs have reduced their weight by more than half!

It’s despite this fact that copper or brass radiators are dependable and do a good job that they fall short because of their high cost and susceptibility to rusting over time. 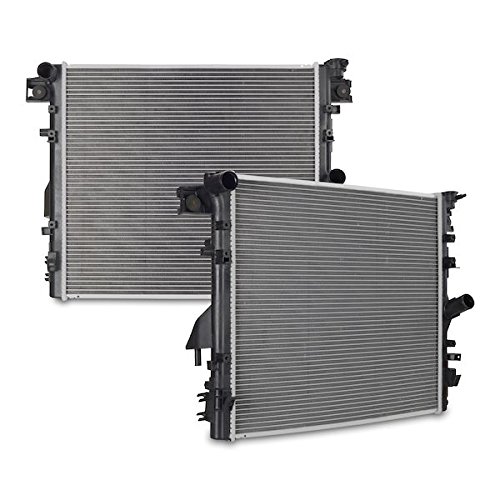 Aside from being less effective than copper or brass radiators, plastic radiators are the most prevalent form of automotive radiators because of their lighter weight and lower cost.

Plastic radiators have the drawback of being exceedingly difficult to repair, necessitating a complete radiator replacement in the event of a malfunction. Here, aluminum radiators triumph over plastic counterparts in heat output. 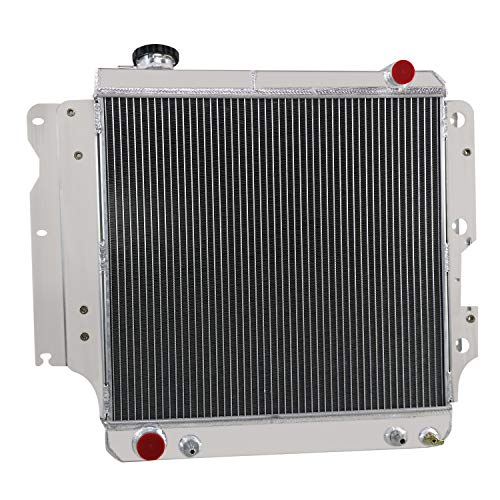 The core and tank of an aluminum radiator are both made of aluminum, making it ideal for high-performance cars.

It is far easier to replace a broken section of an aluminum radiator than it is to replace the entire radiator with a plastic one.

Compared to plastic and copper and brass radiators, aluminum radiators have a significantly higher cooling efficiency. Aluminum is a good conductor of heat because it has a high thermal conductivity.

The core, pressure cap, and outlet and inlet tanks make up the three major components of a radiator.

There is a huge metal area with a series of narrow metal fins at its heart, which serves as the primary structural element.

The flowing heated coolant exits the engine and returns to the radiator, where it is cooled and ready for the next round of heat exchange.

Sealing the cooling system with a pressure cap guarantees that the system remains pressurized. To keep the coolant from boiling and overflowing, the radiator requires this pressure.

The radiator receives coolant from the engine’s exhaust and inlet tanks. When the liquid is extremely hot, these tanks keep it cool.

The coolant itself is another important radiator component. Even though it is not a mechanical component, it is essential to the radiator’s ability to dissipate heat away from the engine.

How a Radiator Functions?

Powered by its various moving parts, a vehicle’s engine burns fuel and generates energy. As a result of all of this energy and activity, the engine can become quite hot.

To avoid engine overheating, it is critical to dissipate that heat from the engine throughout the operation. Helps the engine cool down by dissipating heat that would otherwise be expelled.

Additionally, it comprises a thermostat that regulates the coolant temperature, as well as other cooling components such as water hoses, a fan, and a thermostatic radiator valve.

Radiator hoses transport coolant to the engine via the radiator, where it soaks up extra engine heat before going back to the radiator. When the coolant gets back to the system, thin metal fins dissipate the heat as the hot fluid flows through it.

During this process, cool air enters the cooling system through the grille of the car. The system fan also blows air to help reduce the temperature of the heated coolant and expel hot air from the vehicle when it is not moving, including when you are sitting idle in traffic.

The coolant redistributes throughout the engine after passing through the radiator. Maintaining an ideal operating temperature and preventing engine overheating are the primary goals of this heat exchange cycle.

When a Radiator Fails? 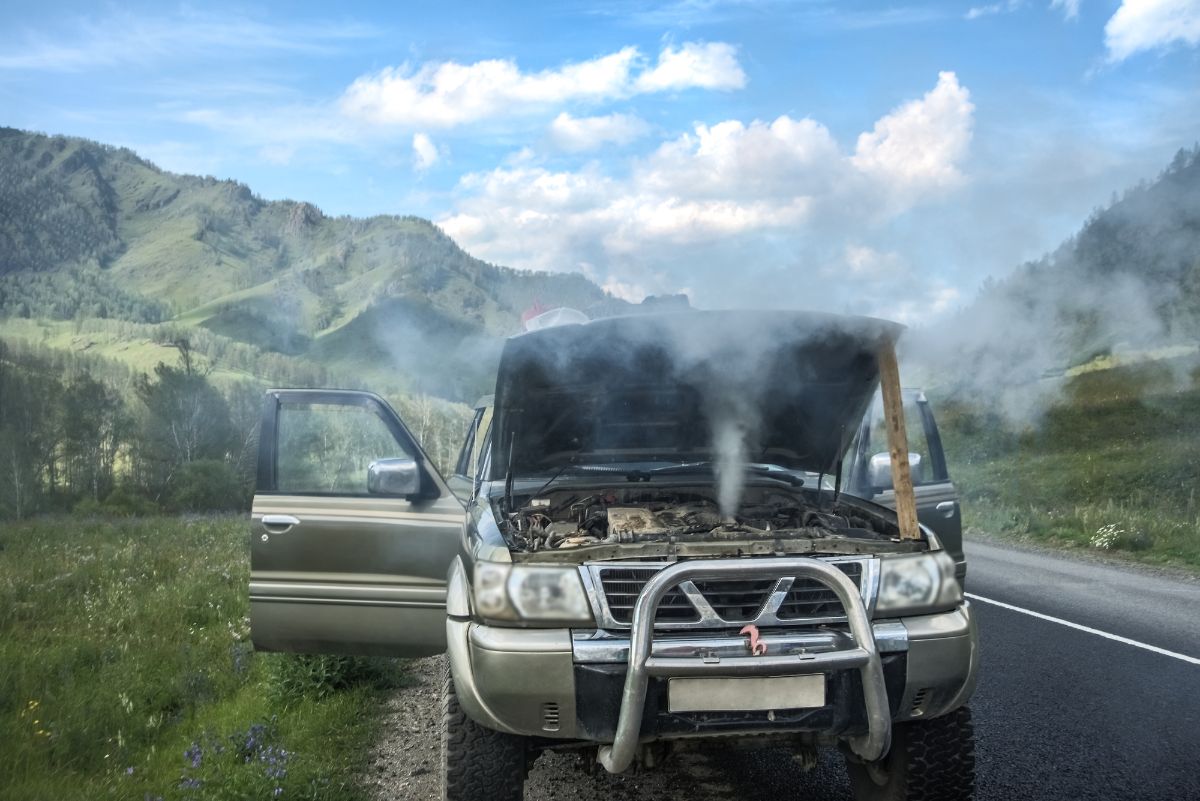 An engine can overheat in extremely hot conditions. However, if the radiator is limited on coolant and any of its hoses leaks, the probability of overheating increases significantly.

Some other causes of radiator failure include a broken thermostat, a technical problem with the cooling system’s fan, or an incorrect pressure cap, all of which can lead to the spilling of coolant.

The engine might overheat in most of these situations, leading to serious damage. Vehicle owners must be mindful of the warning indications of radiator malfunction to save money on repairs. Among the symptoms are:

The radiator, like every vehicle component, needs monitoring to ensure its long life and efficient operation(wish I had known that all those years ago):