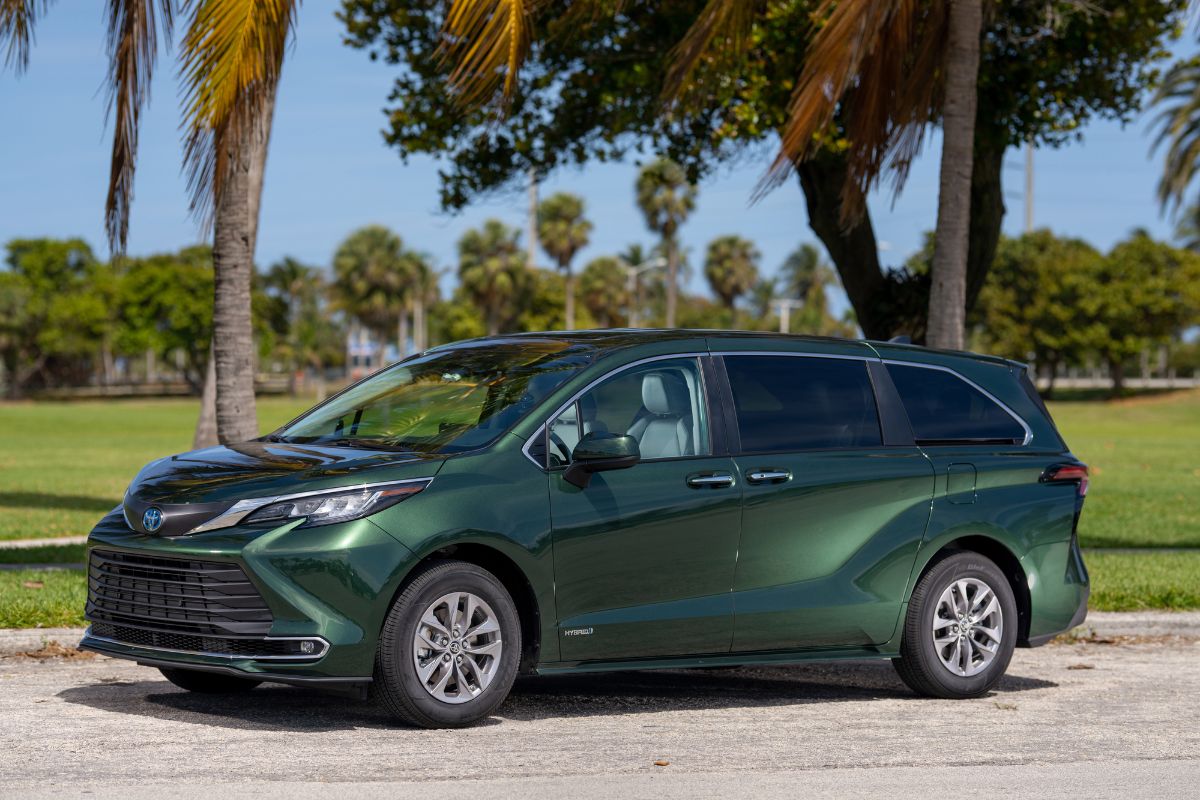 The Toyota Sienna has been one of the most popular minivans on the market in the United States for decades.  The 2022 model year saw the introduction of a hybrid version of the minivan.

The minivan is one of the few eight-seater minivans on the market today, making it an ideal vehicle for large families. The Toyota Sienna doesn’t come cheap, however.

The vehicles that are the most similar to it, the Honda Odyessey, Chrysler Pacifica, and the Kia Carnival all come in at smaller price points.  The price of a base model of the vehicle starts at nearly $35,00, while Touring editions have an MSRP of $50,760.

Of course, good luck finding a base model of the vehicle; due to supply shortages, it is hard to find anything but the Limited and Touring editions of the vehicle on the lots of most car dealerships.

The Toyota Sienna has less horsepower than many other comparable vehicles (245 HP), but its hybrid engine also provides the Sienna with a 36 mpg fuel efficiency.

There are several different options with this model of minivan, and each version will have slightly different specs.  We’re going to look at several different models of vehicles, and use the specs the most common version of the car.

While the focus of this article will be on the 2022 model year, previous model years will be examined as well if there have not been major design changes.

This is because if you really want to look at other options while you’re considering a Toyota Sienna purchase, it’s probably a good idea to explore similar vehicles produced by other car manufacturers.

If you’re in the market for a new minivan, take a look at these choices. 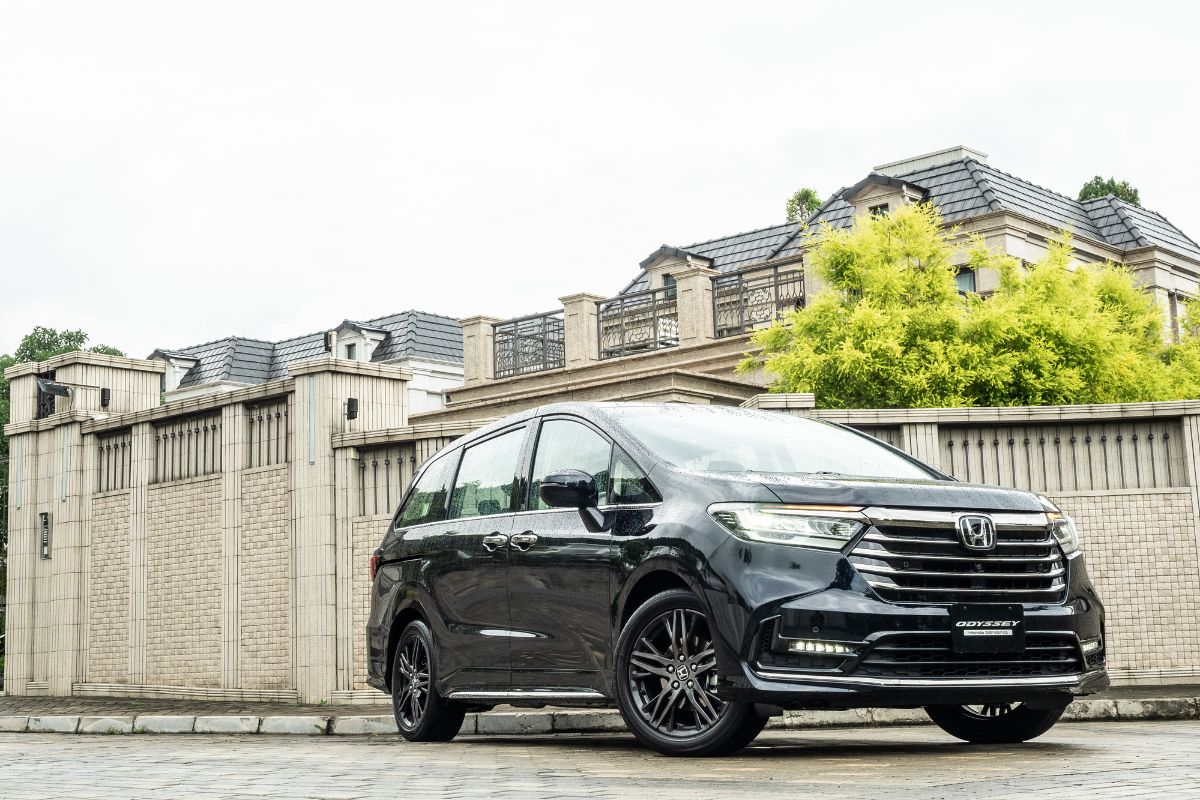 The Honda Odyssey is probably the vehicle that is most similar to the Toyota Sienna.  Minivans from Honda and Toyota have occupied Consumer Reports Minivan Best Buy list for at least the last ten years, and the two vehicles seem to frequently trade awards for safety, efficiency, and maintenance.

Both models have features such as premium entertainment packages and side curtain airbags. Most models of the Honda Odyssey have seating for seven, but the higher end editions have room for eight.

Base model for the Odyssey starts at $33,000 while the highest models cap out around $49,000. The biggest difference between the two minivans is that the Toyota Sienna has a hybrid engine, while the Odyssey is still reliant on a traditional gas power train.

This gives the Odyssey a much smaller fuel efficiency of 19 mpg in the city and 28 mpg on the highway. 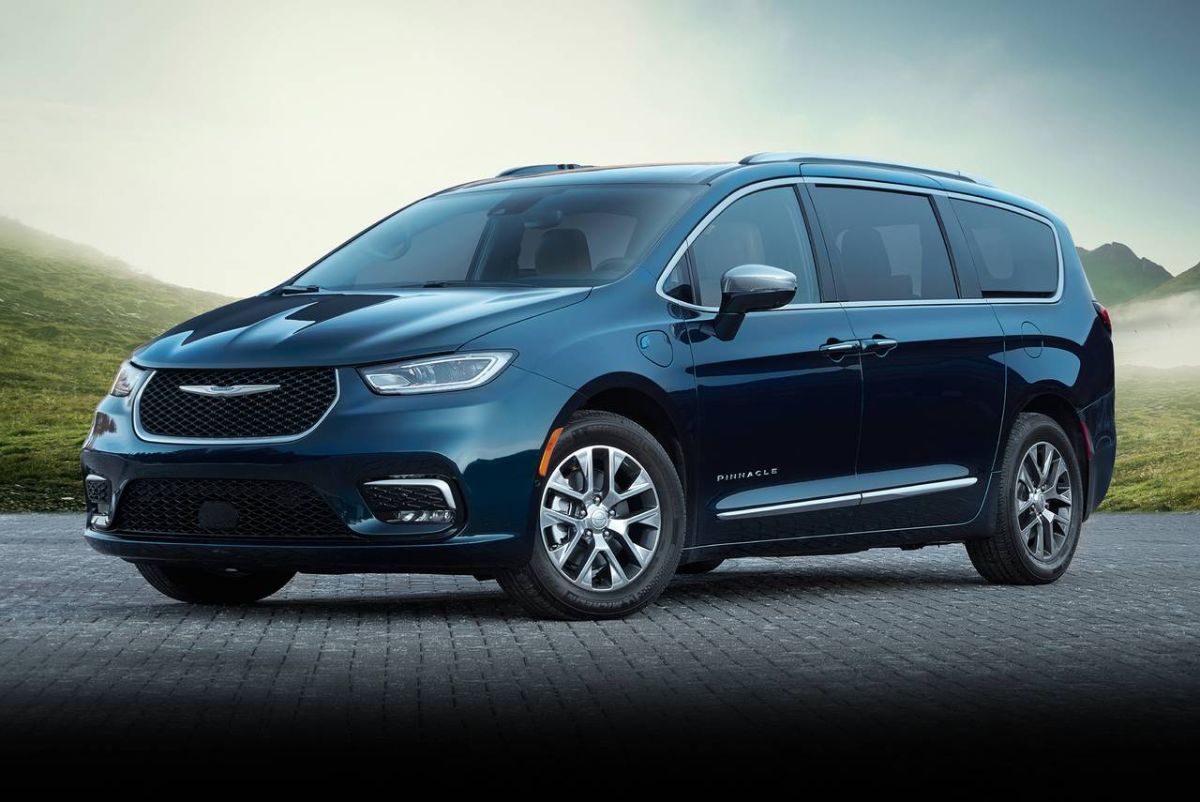 While it seems to have many of the entertainment and environmental features of the Sienna, the Pacifica has historically ranked worse on surveys of owner satisfaction than the Odyssey and Sienna.

The Pacifica does boast higher horsepower than the Sienna, however, (187 HP), but only provides seating for seven people.  Body styling looks very similar to the Sienna.

Chrysler is offering its 2022 model as a hybrid, presumably to compete with the interest that the hybrid Sienna is gaining.  Pricing starts at $37,000, significantly less than it’s competitor’s base models, but preliminary reports indicate that the more popular hybrid model is retailing for closer to $49,000.

That’s still several thousand less than the higher-end editions of the Sienna, however. 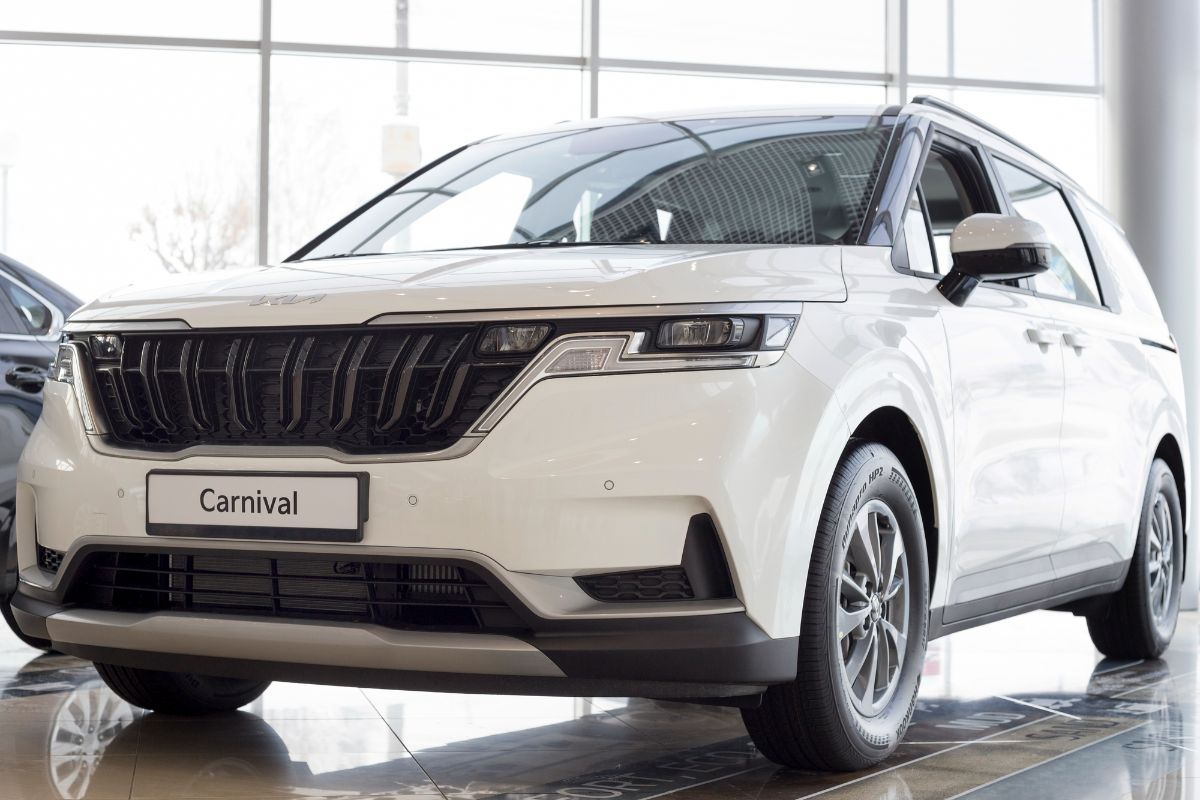 Kia is considered to be a relatively new entry onto the American consumer car market, despite the fact that they have had a presence in the United States for over twenty years.

At first the vehicles had a reputation for being cheaply made, but the company has done a lot over the past several years to fight against this perception, mainly by offering extended warranties on the vehicles.

The interior styling of the vehicle is very similar, although the interior tends to feature more plastic parts than the Sienna or Odyssey, making it feel slightly cheaper.  Of course, this may not be too important to families more worried about keeping the vehicle clean than a luxury ride.

On the plus side, Kia has added several technology features to the interior on its cheaper models that are only available on higher end models of competitor’s vans.

On the outside, Kia has worked to make the vehicle more similar to the large SUVs currently on the market, but people who have test driven the car say that the ride still feels very much like a minivan. 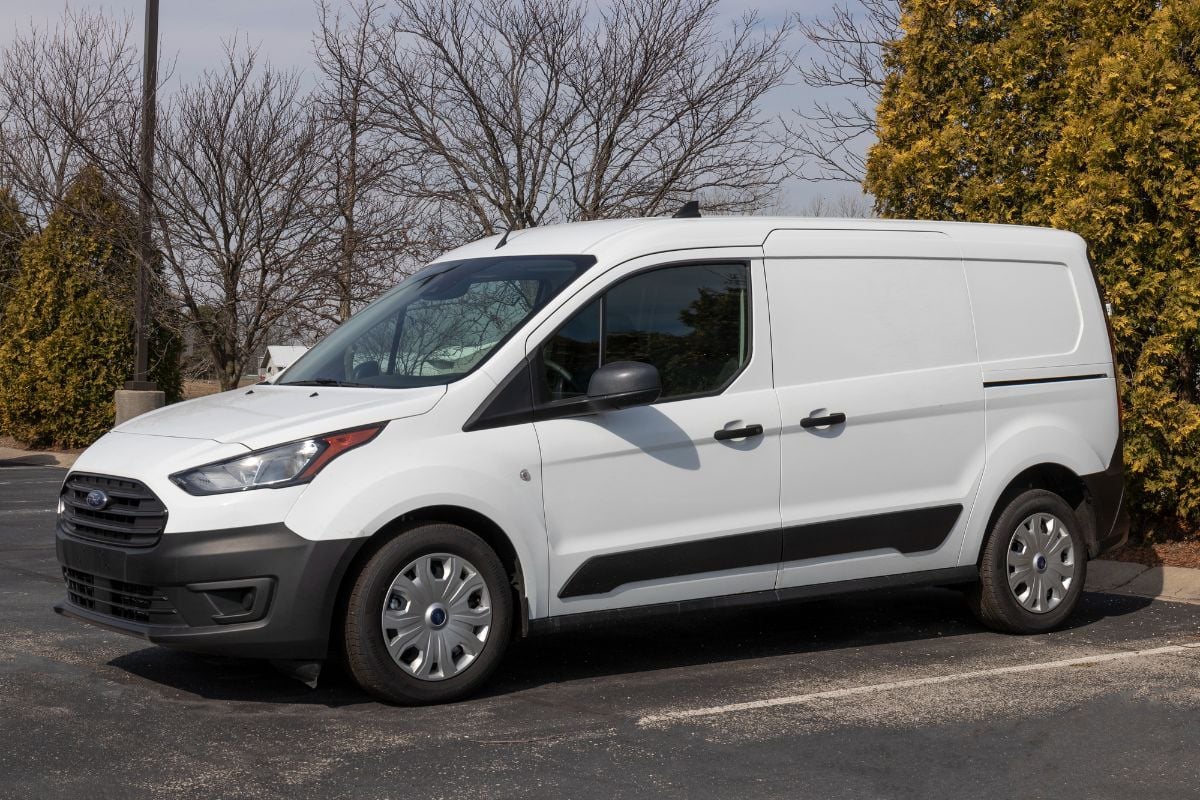 The  Ford Transit Connect Wagon can seem like a major departure from the minivan category for consumers who are used to minivans that are styled like the four other entries already on this list.

This van was designed by the European division of Ford, and looks a lot more like a small bus than a family car.  In fact, it was built on top of a commercial platform, and many businesses are already utilizing stripped down versions of the van as cargo vehicles.

If you have a lot of family members to transport, or just a lot of gear, this vehicle might be right for you.  With an MSRP starting at $27,000 it’s certainly one of the most affordable options on this list.

Keep in mind, however, that the base model is very stripped down; you’ll find virtually none of the technology features that are prevalent in minivans from other manufacturers at this price point.

Gas mileage is pretty similar to its competitors, with 19 mpg in the city and 27 mpg on the highway.  The focus of this vehicle is on flexibility, however. The van offers extended slide doors and a variety of configurations for folding and removing seats.  As sold, it offers seating for seven.

The vehicle is marketed as a commercial vehicle that can also be used by a family; it may be ideal if you’re trying to decide between pick-up truck or a minivan. 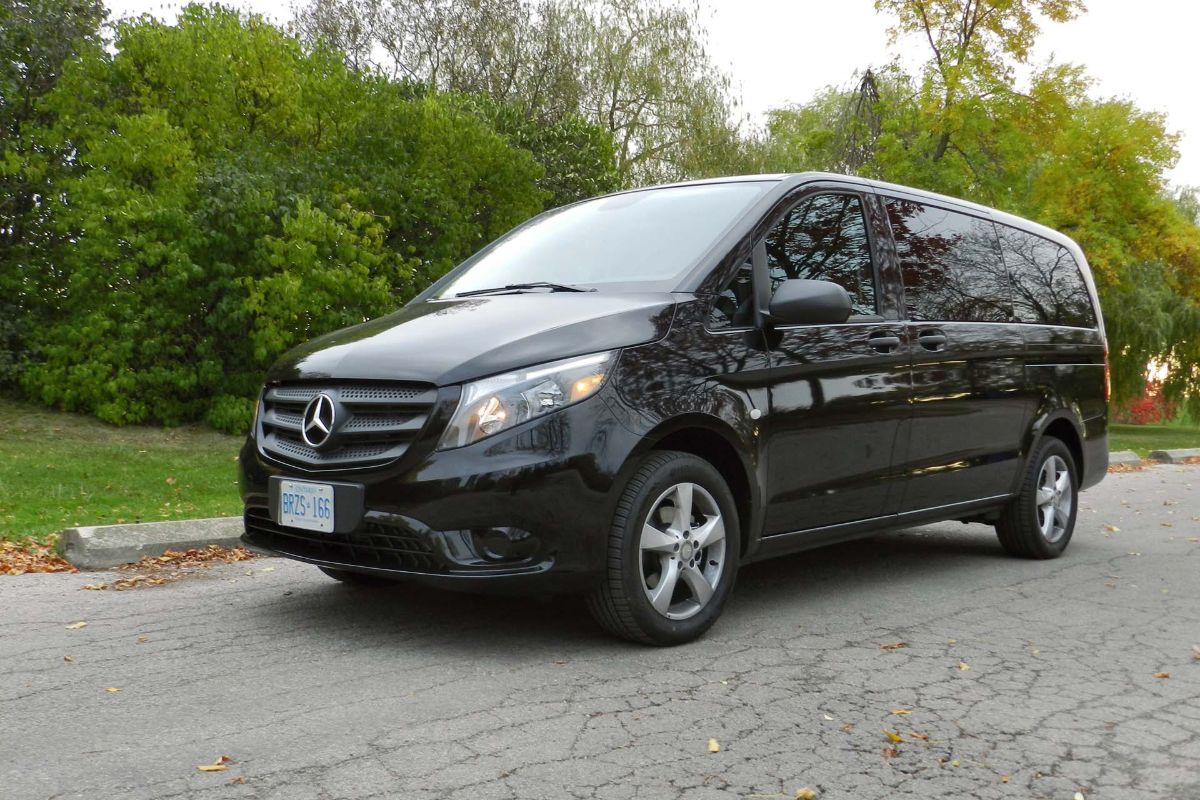 With styling that makes it look more like a commercial truck than a family car and a starting price point of $37,000 for the base model, this van is one of the most expensive entries on the list.

While a buyer is getting the quality of Mercedes-Benz, the interior is reported to feel very much like a commercial vehicle rather than a luxury car.

The van claims to get 21 mpg in the city and 24 mpg on the highway, but the fact that it requires premium fuel will likely eat up any amount that you hoped to save in gas.

Like the Ford Transit Connect Wagon this car was also built on a commercial chassis and is marketed more for the hauling of cargo than people, although it does provide seating for seven. 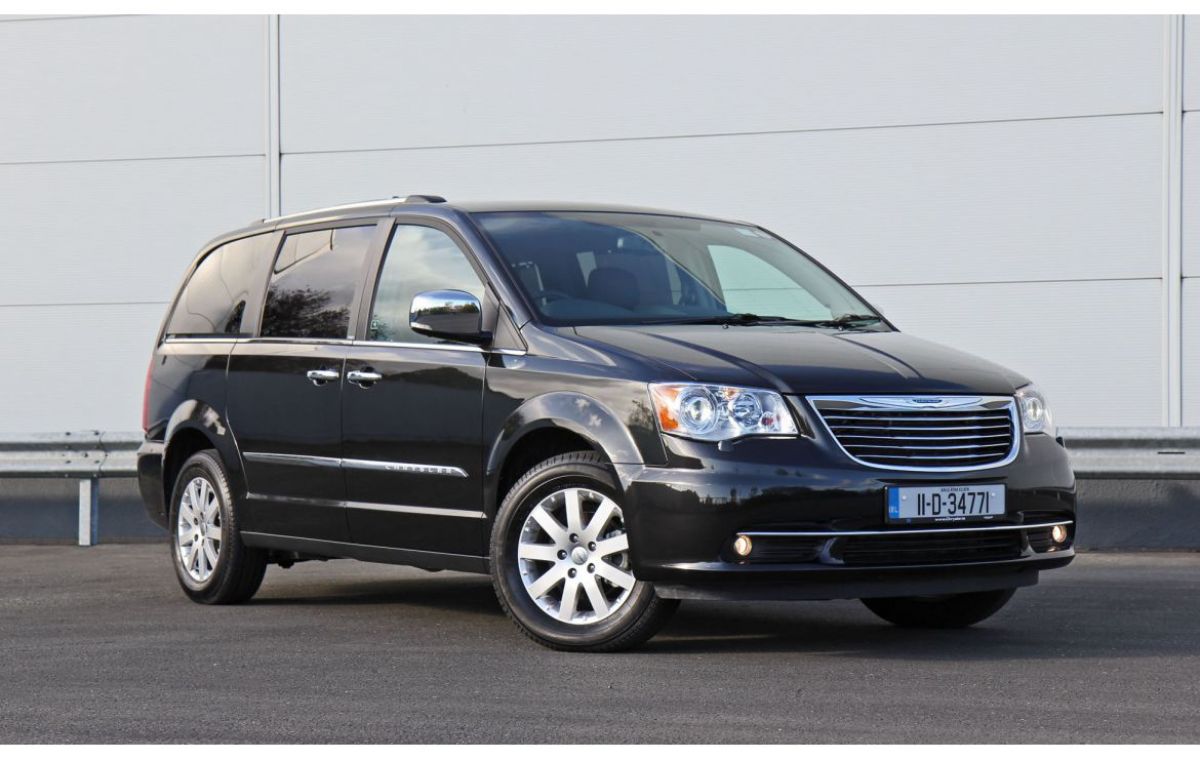 Before we get too far into describing this vehicle, it’s worth noting that in 2022 the Chrysler Voyager is only available to fleet car buyers.  That means that used versions of the car won’t be hitting the consumer market for several years.

The lack of availability has made it difficult to review, but anecdotal reports say that the vehicle feels like a slightly redesigned Chrysler Pacifica from previous model years before its facelift.

Many experts believe that Chrysler intends to market only its Pacifica to the mass consumer market and keep this vehicle as available only to commercial customers.

MSRP for the vehicle starts at $33,000 but because it is offered as fleet-only there are very few higher-end rim packages available.  If you find one of these on the market, expect to pay about what you would pay for a similar model year Pacifca. 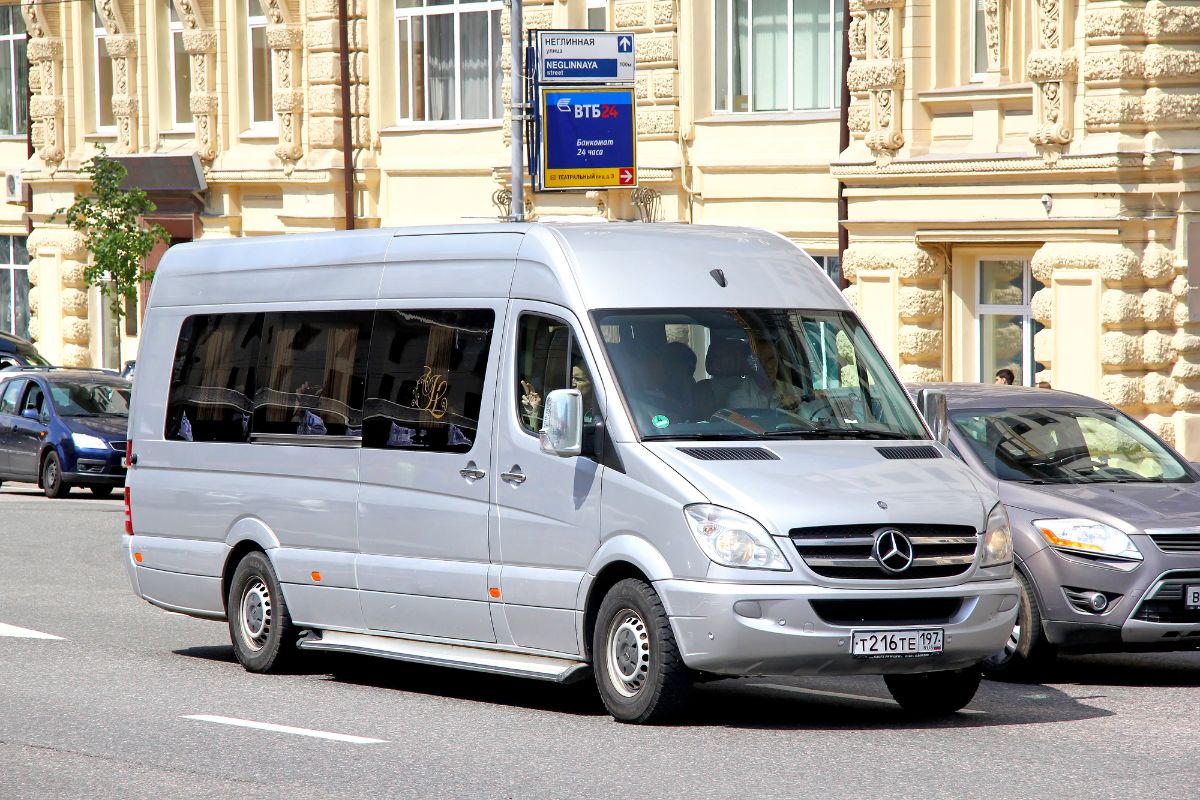 This may appear at first to simply be a larger version of the Mercedes-Benz Metris Passenger Van, and that’s not an incorrect assesment.

The van is being marketed almost exclusively to businesses, and while the company claims it is ideal for “outdoor adventure” it’s hard to determine exactly where any family would take the vehicle off-road.

According to Car and Driver,  “The Sprinter is sold with three four-cylinder engine options—two turbodiesels and one turbocharged gasoline engine—each working through a nine-speed automatic transmission.”

That’s a lot of power, but the size of the vehicle unmakes it unlikely that it would be used for serious off-roading.  Much more likely is the idea that the van could be converted and used as a mini-RV.

The starting price point is much higher than other similar vehicles (MSRP starts at $41,000).  That price difference is the cost of Mercedes quality and styling. 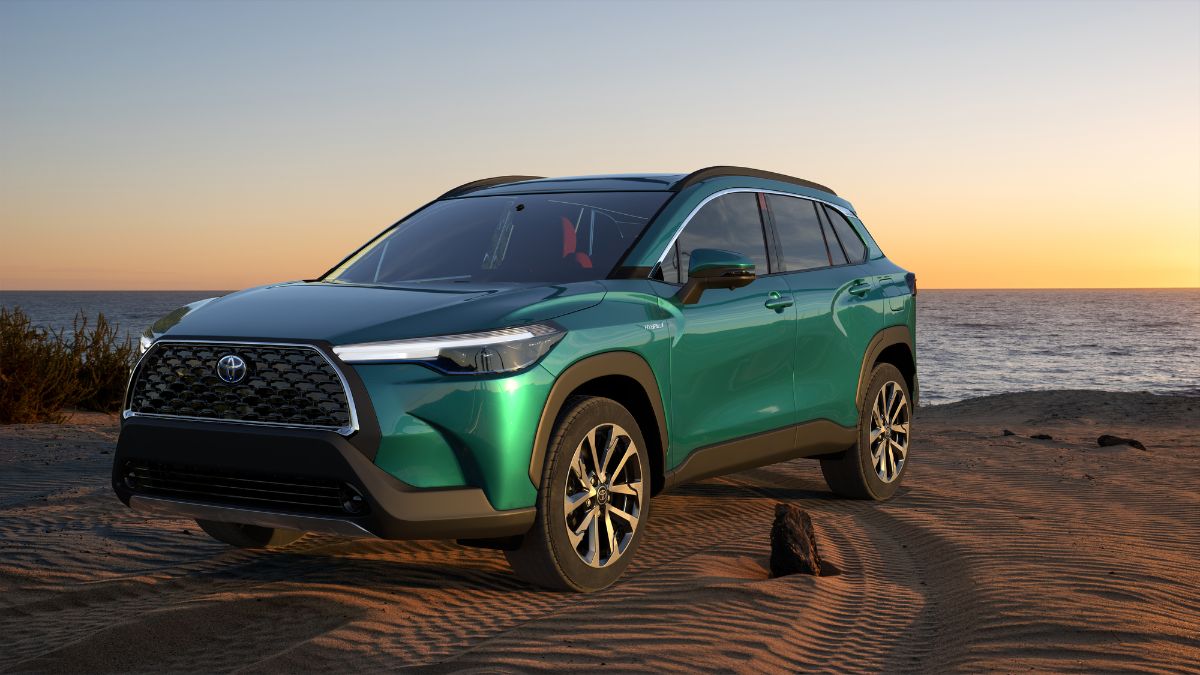 The Toyota Corolla has been one of the most popular cars in America for decades, so it’s not surprising that Toyota is using the name to market it’s entry into the mid-size SUV market.

While this car is certainly not a minivan (it only offers seating for five, for example), it might be a good solution for people who are looking for the quality of a Toyota but might not need all of the room of the Sienna.

With a gas mileage of 31 mpg in the city and 33 mpg on the highway, it’s certainly more fuel efficient than even the hybrid engine of the minivan.

This SUV offers a surprisingly large amount of room for cargo, making it ideal for families that want the cargo flexibility of the Sienna but might not be able to make the leap all the way to a minivan. 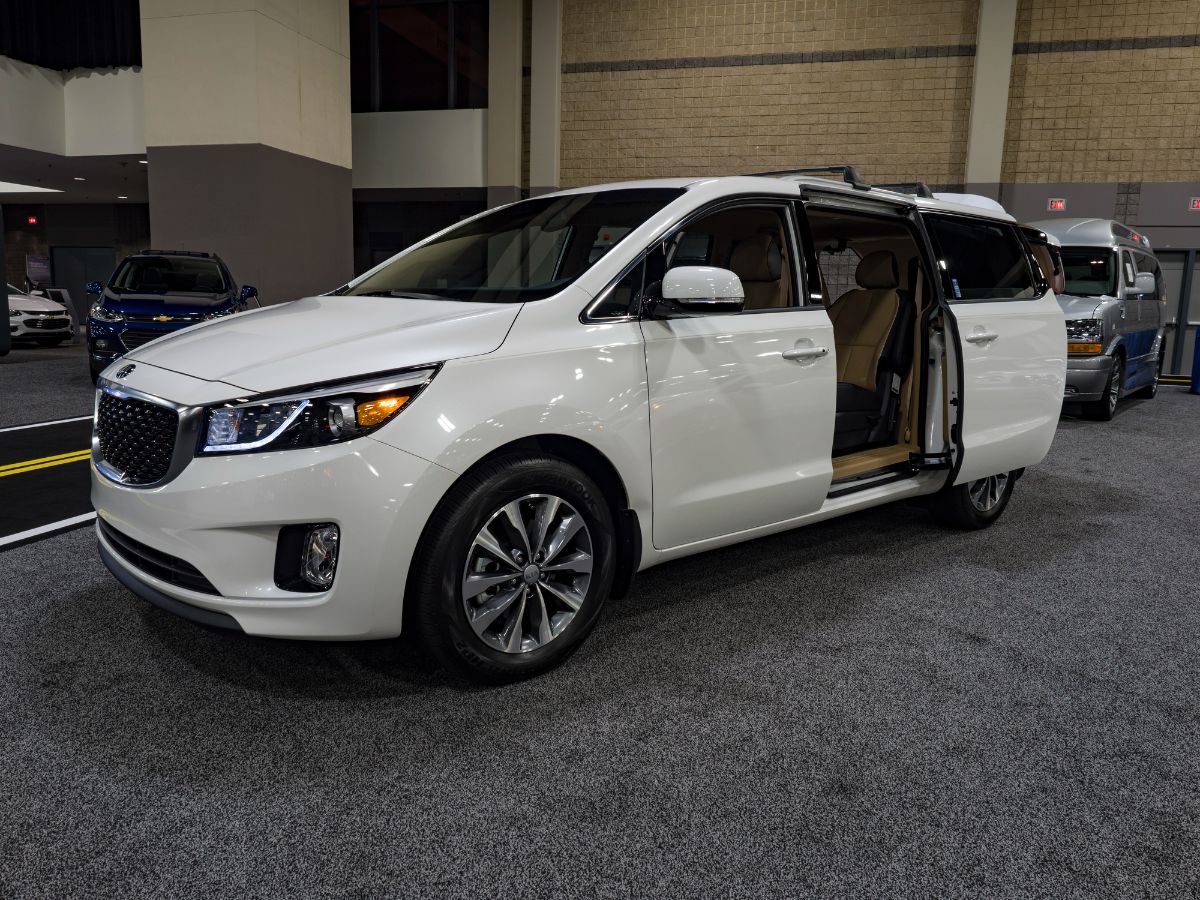 The Kia Sedona was taken off the market in 2021 to be replaced by the Kia Carnival, but there are still enough of them left on the new and used market that we figured it was worth mentioning.

On the used market price points will vary greatly, but it’s not uncommon to find Sedonas that are just four or five years old for much less than $20,000.  If you’re fortunate enough to find one new, expect to pay around $30,000 or less.

The Sedona was Kia’s answer to the Sienna and the Odyssey, but the cheaper price point comes at the cost of a smaller engine and less luxurious interior styling.

With the manufacturer’s warranties still in place you won’t have to worry about maintenance expenses for a while. It’s a good choice if you’re looking for a bargain. 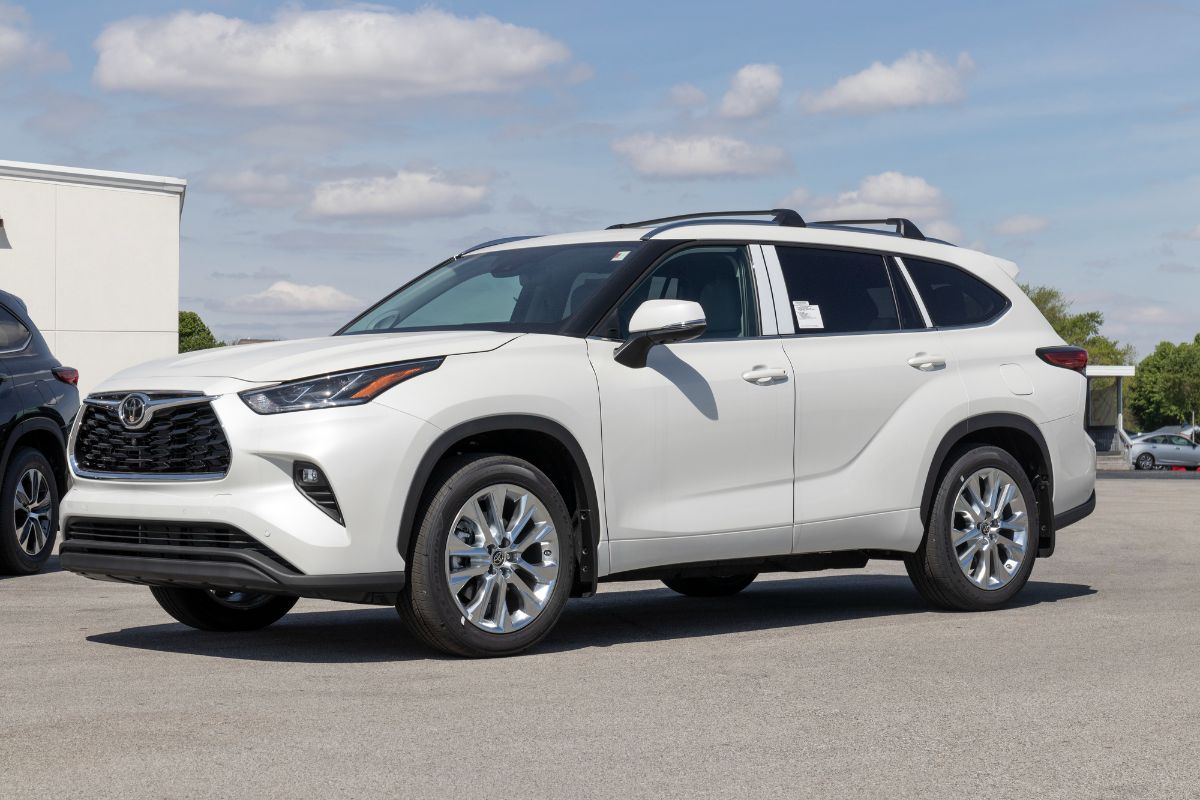 The vehicle seats seven, although the third row is so small that you’ll probably only be able to get kids to fit back there.  Still, it can be ideal if you”re looking for a family hauler that doesn’ have the feel of a minivan.

Gas mileage is slightly worse than the hybrid SIenna at 20 city/27 highway, but comparable to other minivans with traditional gas engines.  You’ll get the same great Toyota quality and styling as well.