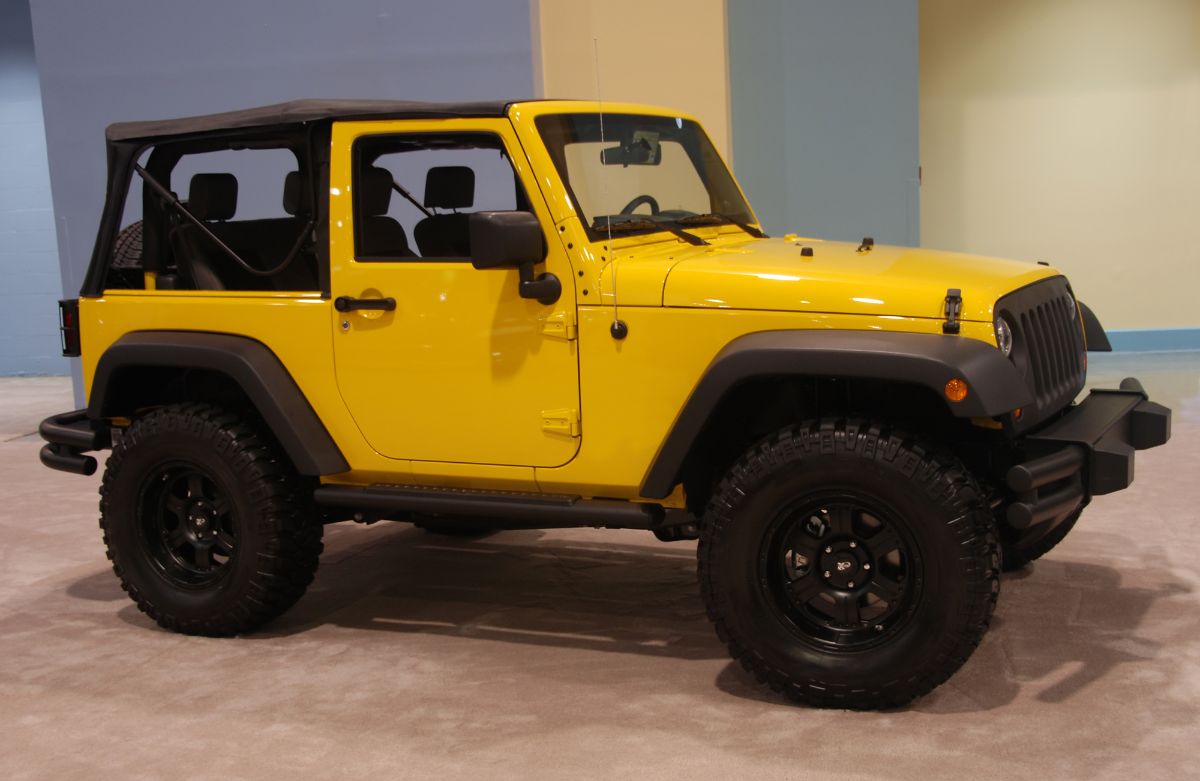 In today’s world brand recognition counts for a lot.  When something is easily recognizable, beloved, and stands out from the pack, it will probably be around for a long time.

People love Jeeps for their design, their durability, their fascinating history, and the way they can satisfy cravings for adventure with every feature starting from their looks on down.

Jeeps were originally designed to take war-zone levels of abuse, give drivers the ability to explore parts unknown, and come in a size and weight that wouldn’t keep them out of tighter areas than a standard vehicle could fit.

Devotees—and there are many—keep coming back to Jeeps because of their dependable 4×4 and body on frame structure, their balance of weight and power, and their impressive approach, breakover, and departure angles.

It’s easy to find numerous other positives like its stylish good looks and easy towing ability, but the proof behind the inspiring “Go Anywhere, Do Anything” motto seems to center around those abilities.

Contents Show
They Really Can Handle Anything
What Makes Jeeps So Tough?
Jeep Wrangler and Jeep Grand Cherokee Benefit From Mechanical 4WD
Flex Power of Static Parts
With Large Approach, Breakover, and Departure Angles, Jeeps Can Climb
Your Choice of Modifications and Personal Touches
Their Fanbase Returns To Them Again and Again
Surprisingly Affordable To Fix
Time-Tested, Inside and Out
What makes Jeeps so classic?
Aesthetics, Of Course
What do people love about a Jeep’s rugged looks?

They Really Can Handle Anything 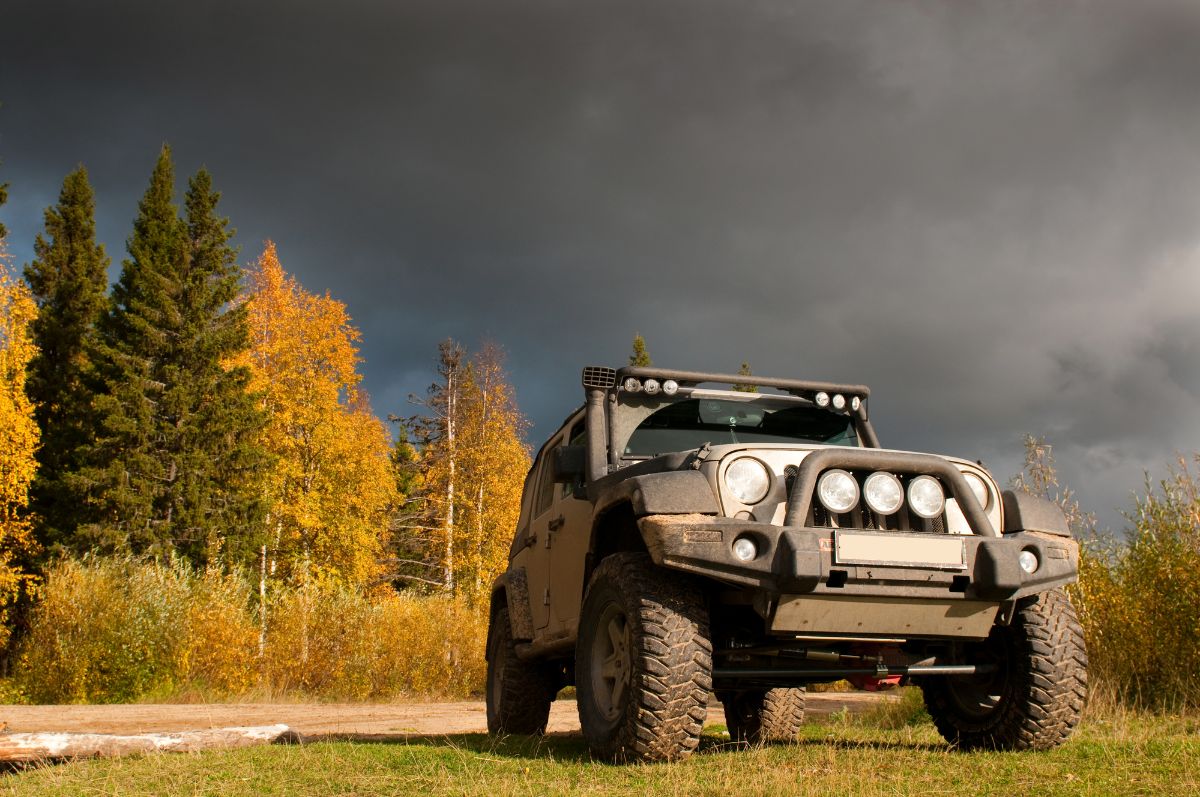 Burly trucks, dirt bikes, ATVs—a wide-ranging category of vehicles speak to us about the ability to go anywhere and conquer anything.  To accomplish certain jobs or take part in certain hobbies you’ll need to safely cross terrain that might be rocky, muddy, steep, or unstable.

A number of vehicles can back up their claims to meet these challenges, but Jeep’s reputation still makes it stand out even in this elite group.  For the real reasons, we should ask none other than Jeep owners themselves.

What Makes Jeeps So Tough?

The list of attributes includes an extremely capable four wheel drive system, a solid front axle, and a strong body on frame design, but the biggest reason Jeep owners name is the short wheel base. 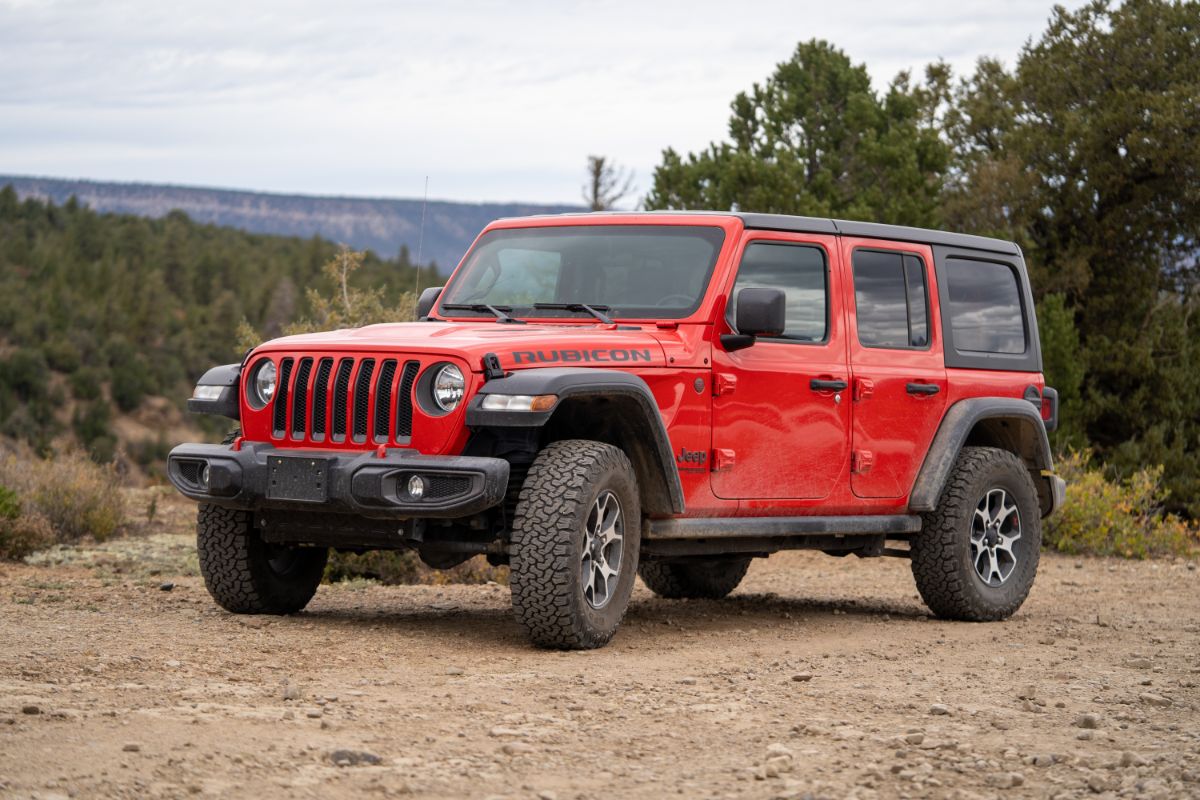 Two of the famed models of Jeeps take advantage of the added torque from a four wheel drive system, which brings the engine’s power to all four of the car’s wheels.  This level of extra torque helps a vehicle take on off-road conditions.

Jeep owners talk about the solid front axle, which tends to have a little more give than a lot of other off-road vehicles that employ independent suspension systems.  A solid front axle is more forgiving of bumps and conditions that tend to jar.

In addition, many Jeeps still use what is called a ladder-frame, which is how they were first designed back in 1940-1941.  This body on frame design lends a vehicle strength, and one reason is because of its heightened flexibility.

Compared with unibody construction, vehicles built with body on frame design can pull more weight and absorb impacts without spreading vibrations up through the entire system.  These flexible parts allow for greater articulation all around.

With Large Approach, Breakover, and Departure Angles, Jeeps Can Climb 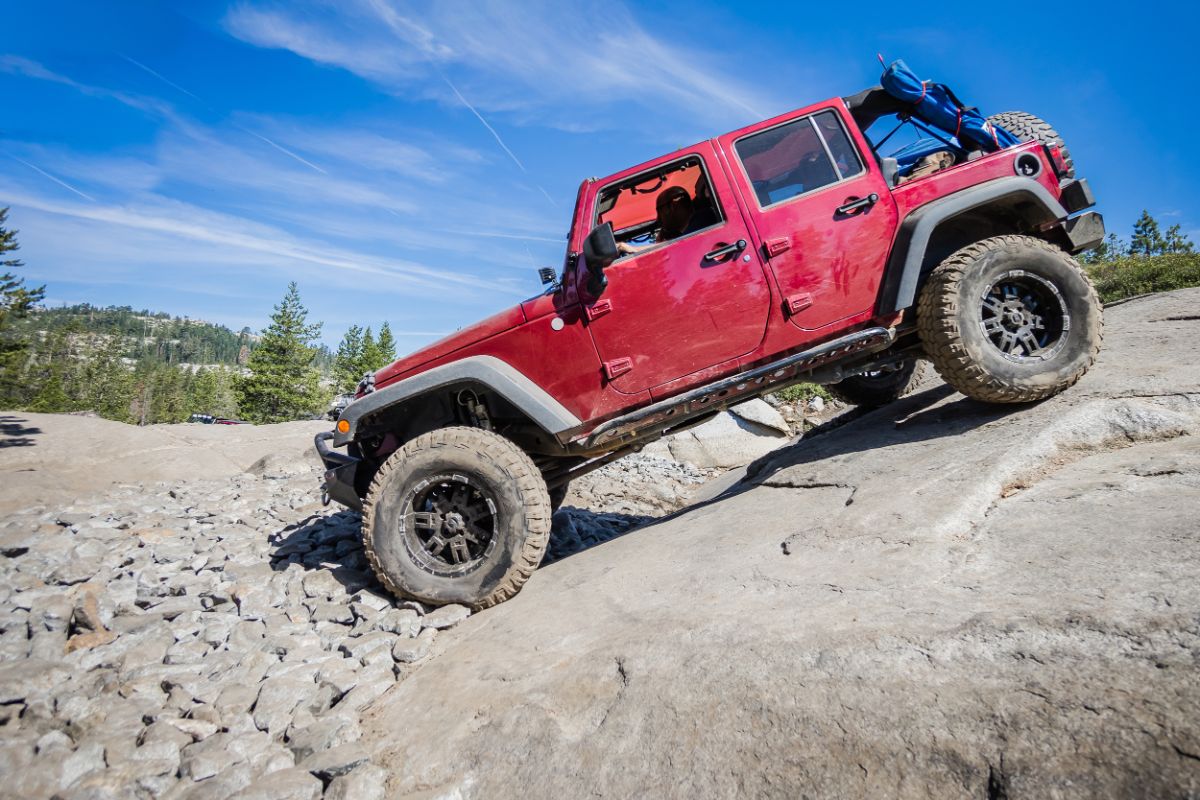 The angle between the bottom front edge of a vehicle’s wheel and a specific height it attempts to climb forms a ramp.  This is called the approach angle, while the reverse, or the maximum steepness the back wheels can descend from and settle back onto level ground, refers to the departure angle.

A breakover angle is a bit more complicated, but basically tries to measure the maximum height of a piece of rocky and uneven terrain that can be passed over between the front and rear wheels that won’t knock into (and damage) other parts of the car.

Your vehicle’s wheelbase describes the distance between the center of each of your axles.  When this distance is minimized, as it is on many Jeeps, you can roll over rocky ground without fear in a way that other vehicles can’t.

Your Choice of Modifications and Personal Touches

Jeeps offer a huge variety of add-ons that not only delight enthusiasts looking to personalize their ride but are genuinely useful as well.  Spruce up your factory bumper with a tougher one, especially if you plan to do a lot of off-roading.

Mount a grab-handle to your Jeep’s roll cage or pillar to let everyone know they may not be in for a relaxing Sunday drive.  Keep things cleaner and scratch-free with sporty seat covers, floor liners, and entry guards.  And, of course, take some time to shop the diverse towing packages for your very capable vehicle.

Their Fanbase Returns To Them Again and Again 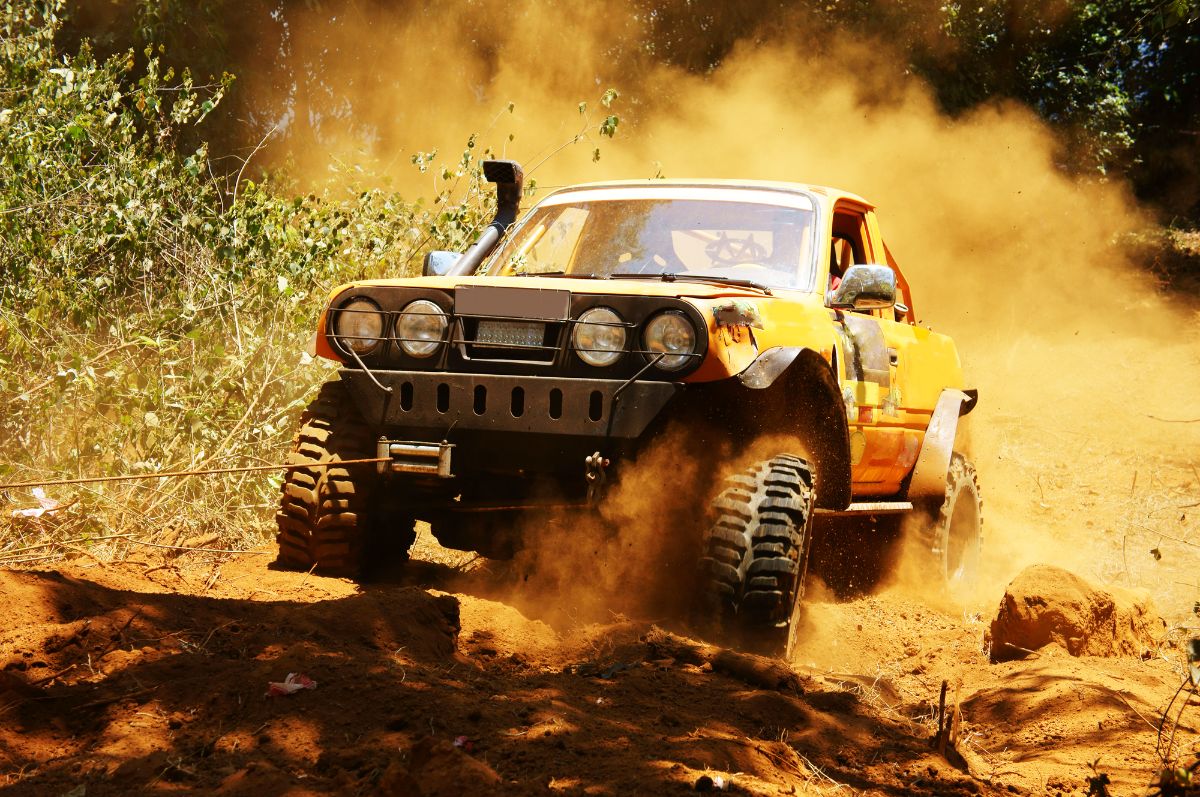 When a buyer falls in love with a Jeep to the point of purchase, they’ve likely done enough research to know about all the benefits that go beyond rugged good looks and trailblazing capability.

But it’s probably having the experiences when actually taking them out on the road again and again that make bona fide fans out of Jeep owners.

Many people who buy Jeeps have bought them multiple times, whether trying out a few different models or being unwilling to go to a different type of SUV when their Jeep drives its last mile.

Jeeps have been around for many decades now, and they have been consistently in-demand.  The market for Jeeps is not likely to change any time soon, and this makes for a healthy number of parts available for whenever your Jeep needs repairs.

Replace parts and fix your Jeep without wringing your hands over being unable to find obscure parts that match up to your vehicle’s make and model specifications.

Time-Tested, Inside and Out 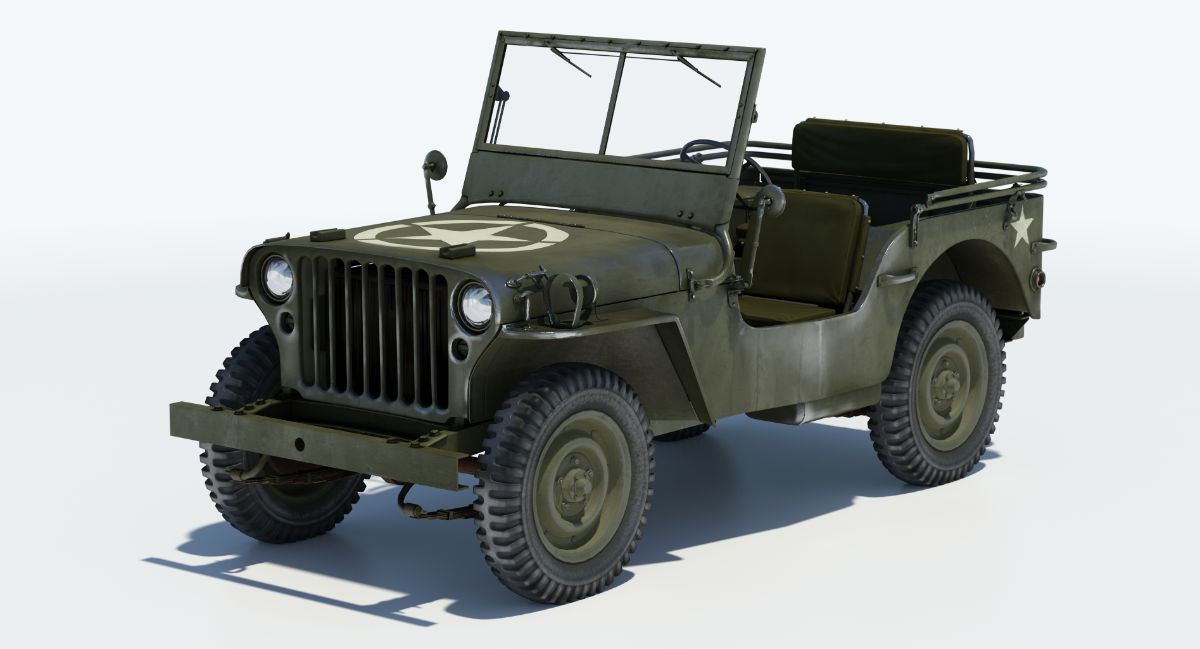 Just as their appearance insinuates, the Jeep was conceived as a US Army vehicle.  With a truly interesting history tied to World War II, Jeeps tap into themes like courage under fire and standing up to the most rigorous testing imaginable for their class.

What makes Jeeps so classic?

They were built as a utilitarian military vehicle, and in many ways, not much has changed since then.

The Jeep was developed in 1940 based on the Army’s need for a vehicle that could dependably cross unpredictable terrain during and after the war.  Even those with minimal knowledge of cars can easily recognize the look of a Jeep and associate it with World War II films and photos they’ve seen.

Soldiers could jump effortlessly in and out of a Jeep with the low side body cutouts.  Its design incorporated significant engine power but lighter weight.

Early models were touted by their wartime drivers as being able to carry double the weight they were designed for, dart efficiently over unpredictable terrain, and fit into planes for transport. 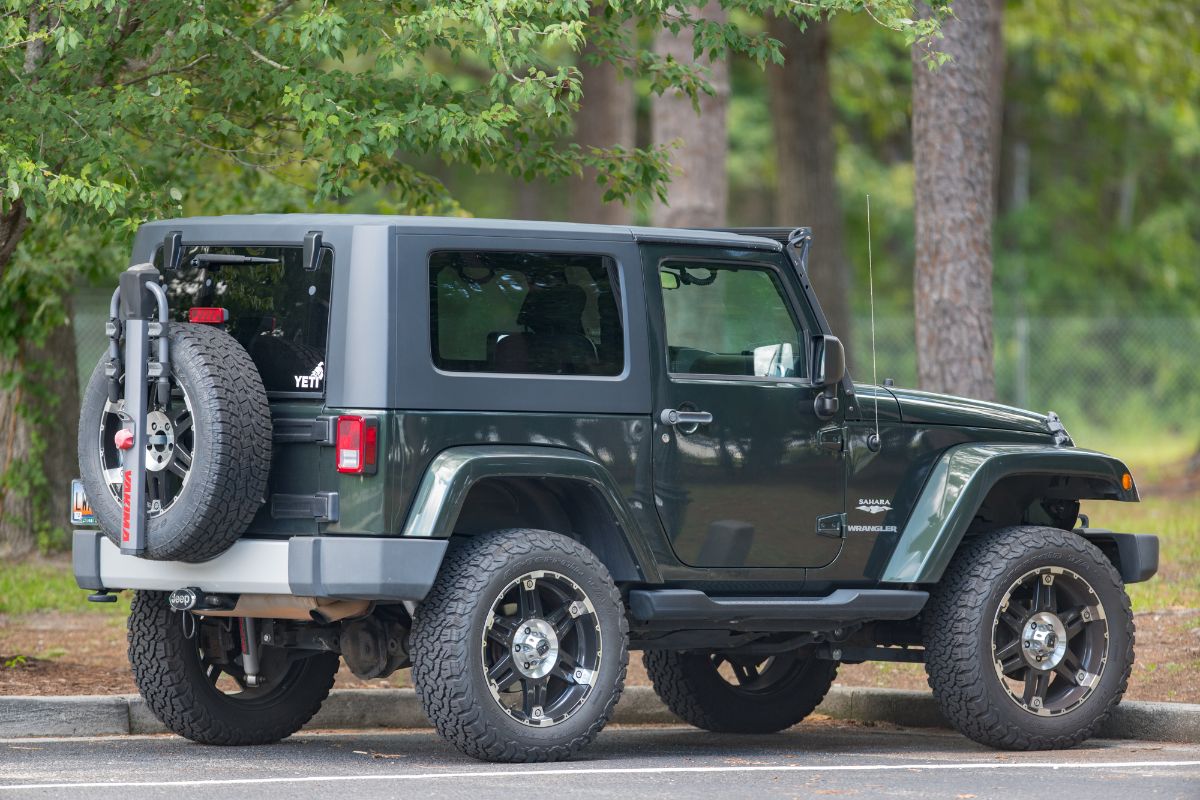 Automobile designers don’t exactly have free artistic rein to shape the body of a vehicle.  While appearance factors in, the aerodynamic formula must obey whatever circumstances allow the car to move most efficiently with the given amount of power its engine has.

This places limits on how vehicles are shaped, and as a result many cars on the road end up looking similar.  From its robust signature grill and angular yet muscular physique to its safari-esque ambiance, the utilitarian yet stylish Jeep makes an entrance.  It stands out even among other sport utility vehicles, in large part because of its looks.

What do people love about a Jeep’s rugged looks?

Even if you’re not an avid outdoorsman, you can look—and feel—the part. Frequently seen with a convertible top, the already-stylish Jeep gives an even greater invitation to freedom with an open-air ride.

Jeeps have held on to the military aesthetic not only because the design features serve a purpose for functionality but also to announce to onlookers that the vehicle is ready to take you to places others can’t.  There’s no reason to limit yourself.

While some feel eternally shackled to a desk and others delight in frequent off-road excursions, everyone gets the adventure bug now and then.

Whether or not your week holds the possibility for a trek into the unknown, a Jeep lends an air of exploration which can inspire you to plan your next vacation even if the wait feels interminable.