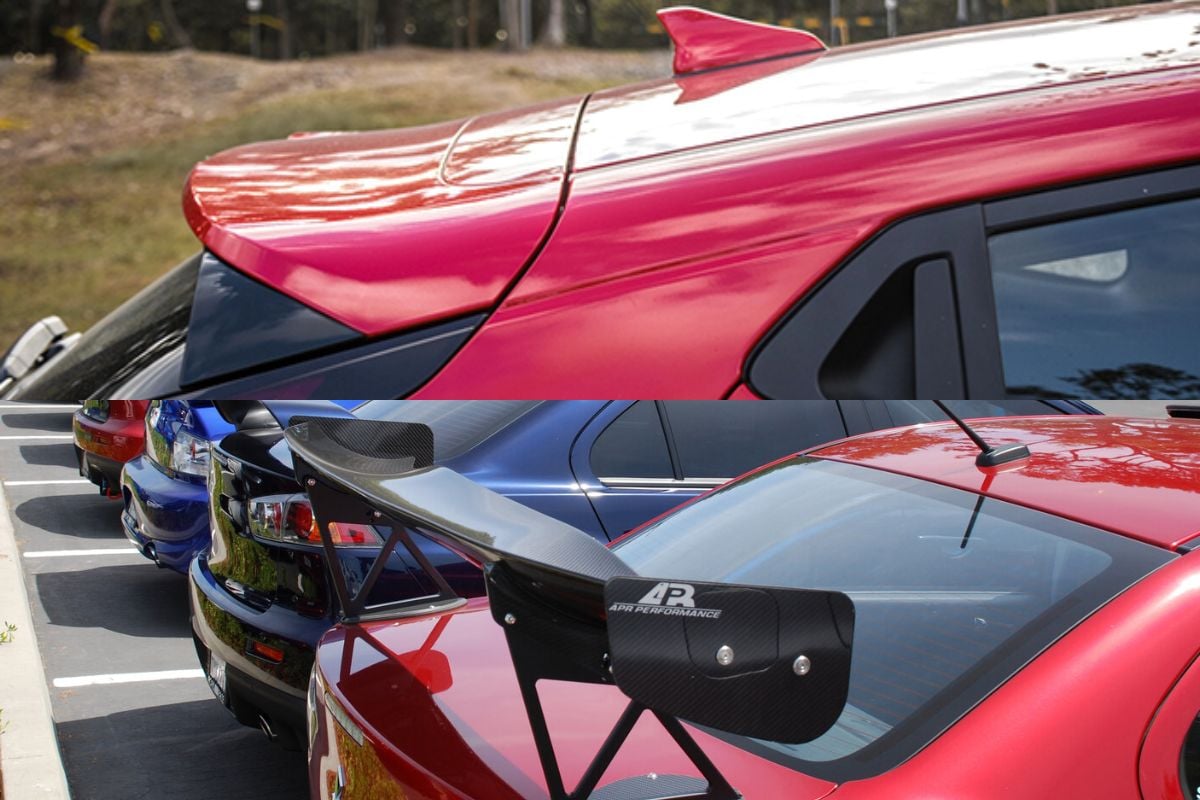 Spoilers and wings are two vehicle accessories used to assist with the aerodynamics of a vehicle but in different ways. The localized airflow gets disrupted by a spoiler while the airflow gets diverted upward by the wing.

No matter what kind of automobile you’re driving—a sports car or a Mini Cooper—lots of research went into understanding its aerodynamics. Manufacturers of automobiles of all sizes are increasingly installing spoilers. Meanwhile, high-performance vehicles have traditionally been distinguished by their signature forceful wings.

The aerodynamic performance of a vehicle can be enhanced by installing several different accessories. Wings and spoilers, however, are among the most often used modifications by motorists. While the two approaches share a common goal—lessening the vehicle’s encounters with the wind—the resulting aerodynamic effects are somewhat different.

So keep reading as we take you deep into the world of spoilers and wings, their differences, pros and cons, and whether you need one.

When Comparing Wings And Spoilers, What Are The Key Distinctions?

How a wing and a spoiler divert airflow is the primary distinction between the two. A negative lift is created when airflow is deflected upward by a wing, which is also called an automobile airfoil.

A spoiler, meanwhile, is a bar that interrupts localized airflow to slow down the vehicle and decrease lift. Due to their visual similarity, the terms “wings” and “spoilers” are often used alternately.

Keep in mind that a wing has the appearance of an upturned airplane wing to distinguish between the two. In doing so, it separates the vehicle’s plane from the vehicle’s back. However, a spoiler is mounted on the trunk lid, rear window, or tail end of the roof.

To What End is a Vehicle’s Wing Necessary? 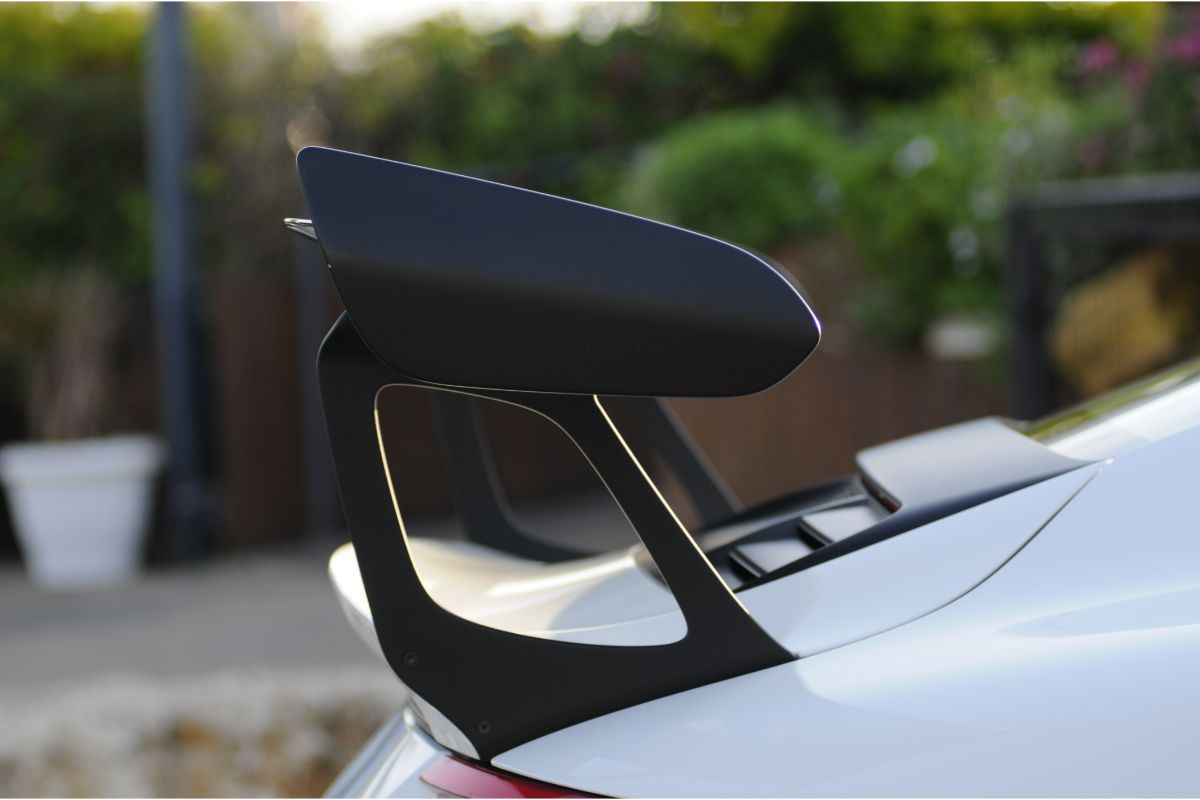 Whenever you hear, “That car has a wing on it,” you should picture a raised area, like the one found on the IndyCars’ rear platforms. High-performance autos, such as those used in elite motorsports, use wings to generate more downforce.

With a rear wing installed, the air being pushed away from the vehicle can be caught and channeled upward, causing the trunk to sink. In a race where every second counts, this will let drivers take corners at top speed.

Just What Function Does A Spoiler Serve?

There has been a recent uptick in the prevalence of cars with spoilers. A spoiler, in the context of today’s discussion, is an aerodynamic device that is used to disrupt the flow of air over the roof of a car. A spoiler, similar to a wing, is designed to deflect air upward and away from a vehicle.

Top-performance cars benefit from the downforce given by a spoiler, which diverts air away from the vehicle’s rear in areas where it would otherwise create a low-pressure pocket, increasing the car’s agility at high speeds. Turbulence is produced when the high-velocity airflow from the car’s roof meets the low-velocity airflow from the low-pressure area. Also, wild turbulence reduces MPG.

What Materials are Used to Make Spoilers and Wings? 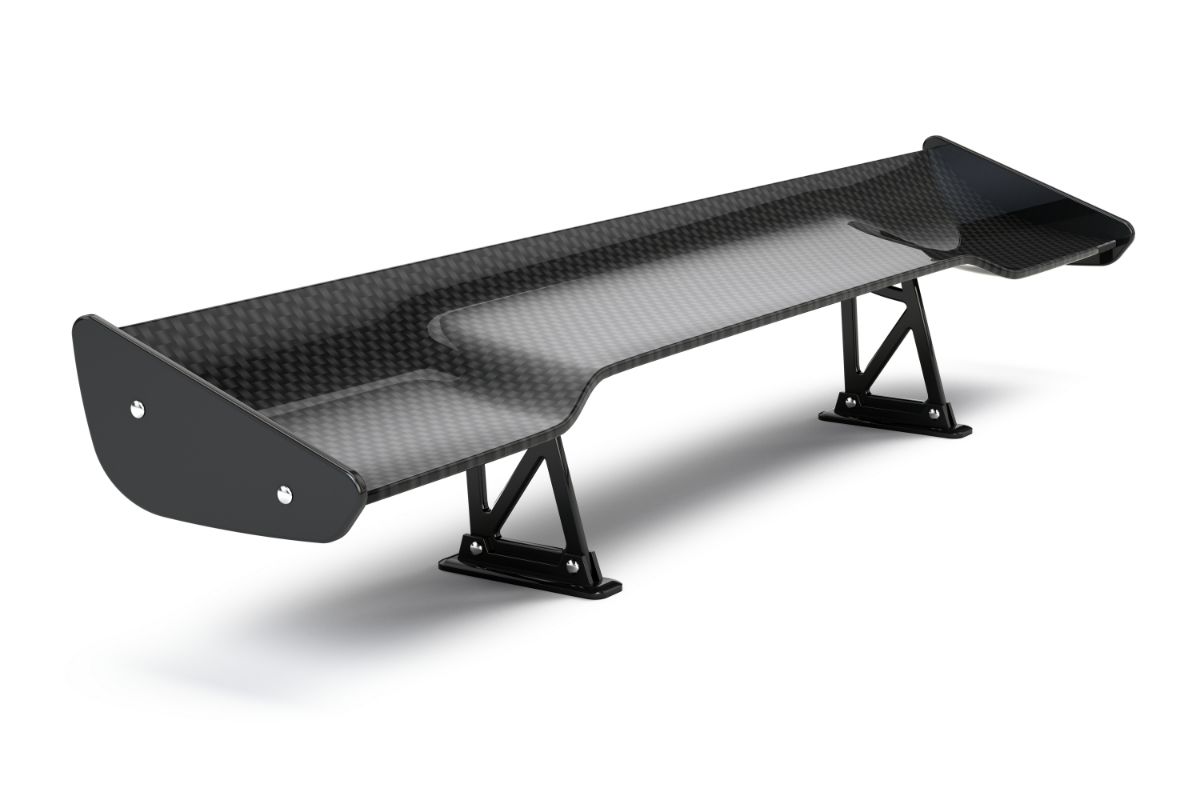 Spoilers and Wings usually comprise light polymer-based substances, such as:

Fiberglass: Due to its low production cost, fiberglass is frequently used in the automotive industry. Spoilers made of fiberglass are made of fiberglass cloth impregnated with a thermosetting material like epoxy. Despite being strong and malleable, fiberglass is no longer commercially viable due to the high cost of labor necessary for producing even small quantities.

Silicone: Recently, numerous companies that produce auto accessories have begun employing silicon-organic polymers. The great plasticity of this fabric is its primary boon. Silicone has superior thermal properties and a longer lifespan than other materials.

ABS plastic: Most original equipment manufacturers (OEMs) cast admixtures with ABS plastic, usually granular fillers, to add stiffness to this low-cost material, and the resulting spoilers are widely used. A major con of plastic is its fragility, which worsens with time due to the loss of volatile phenols.

Carbon fiber: This is a costly material that is both lightweight and strong. Large-scale production cannot currently use carbon fiber in automotive parts due to the high quantity of manual labor required.

The back of the car is naturally ventilated by air rising from the roof. Free airflow is likely to raise the back of the vehicle at high speeds due to the low pressure it creates. The addition of a spoiler deviates this airflow, reducing both speed and lift.

Reduces resistance to forwarding motion. At first, spoilers were built for high-performance sports cars, race cars, and rally cars. Technology has advanced to the point where it is already standard on consumer vehicles. 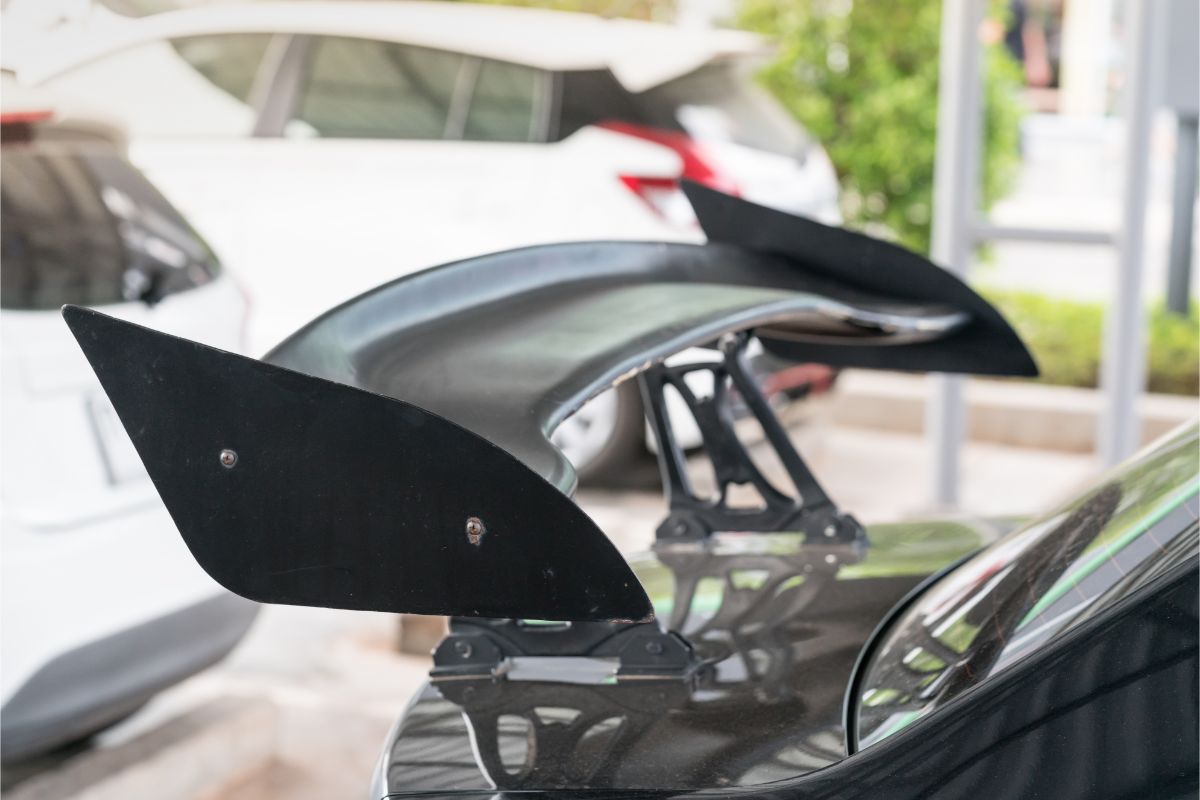 A vehicle’s rear wing creates a negative lift by directing airflow over and beneath it. Redirecting the airflow from the roof upward helps to lower the vehicle’s rear end. This effect is very helpful in racing, as it keeps the automobile from skidding.

In the Battle of Wings and Spoilers, Which Fares Better?

Both a wing and a spoiler can improve a car’s aerodynamics, although, at very high speeds, a wing is more efficient at producing downforce. However, at the speeds that vehicles typically travel on the road, a wing would not benefit the vehicle’s performance. This is why modern automobiles typically use spoilers instead of wings.

What Purpose Does the Rear Wing Serve? 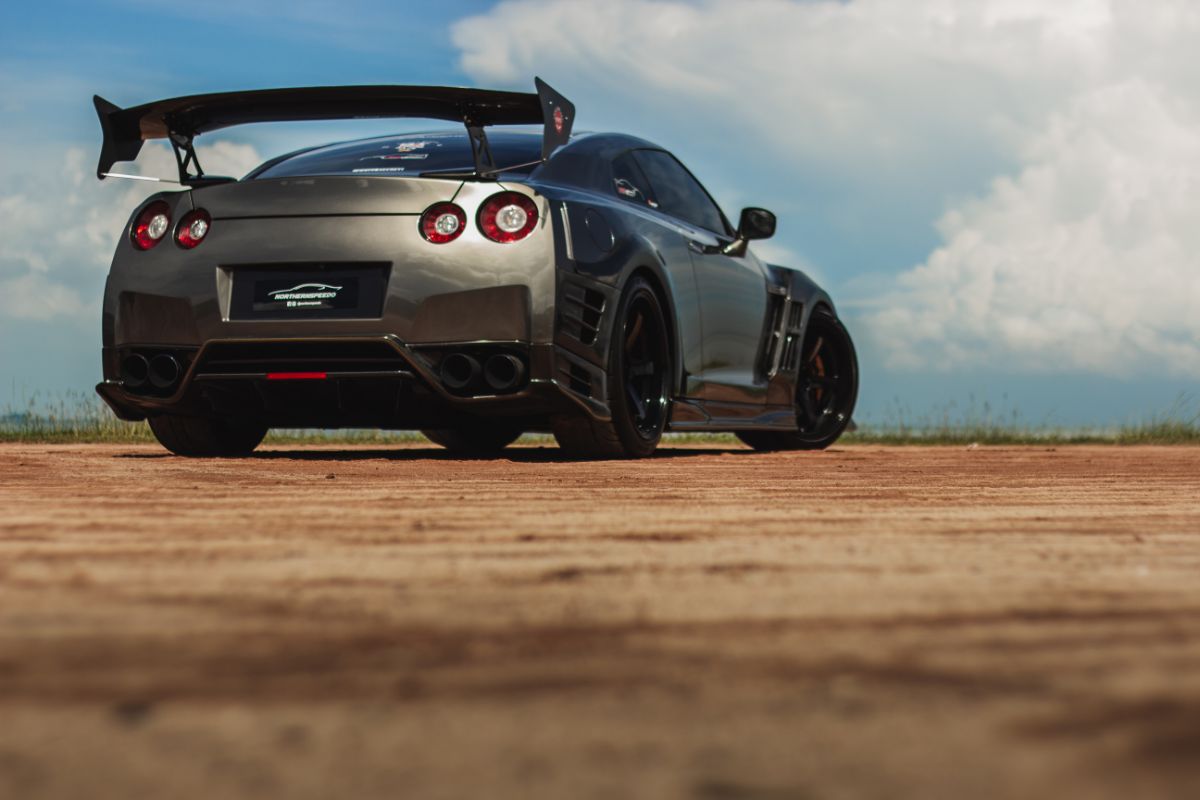 A sports car’s rear wing has only one function: to generate downforce. If you take an airplane wing and put it on the underside of a car, you’ll get downforce instead of lift. The wing is mounted on the back of the car to exert the most downward force on the back wheels, maximizing traction.

BMWs, among the most dedicated track-focused automobile brands, often come equipped with a wing at the factory. BMW uses downforce extensively, particularly in the E30 M3 or E92 M3 GTS.

The Disadvantages of a Rear Wing

An enormous quantity of drag is created by the rear wing, which means that the top speed must be reduced to gain any noticeable amount of downforce. The shortfall in the car’s forward motion is due, in part, to the extra structure attached to the car’s rear, which protrudes into the airflow and pushes against the vehicle’s forward movement. Due to this inefficiency, top speed may be reduced by 15% or more.

Many automakers are already aware of the issue. Some vehicles utilize “active aero” to delay wing deployment until they reach a speed at which downforce is useful, improving efficiency at lower speeds. The result is increased efficiency at low speeds and less drag at high ones.

Exactly What Benefit Does A Spoiler Provide? 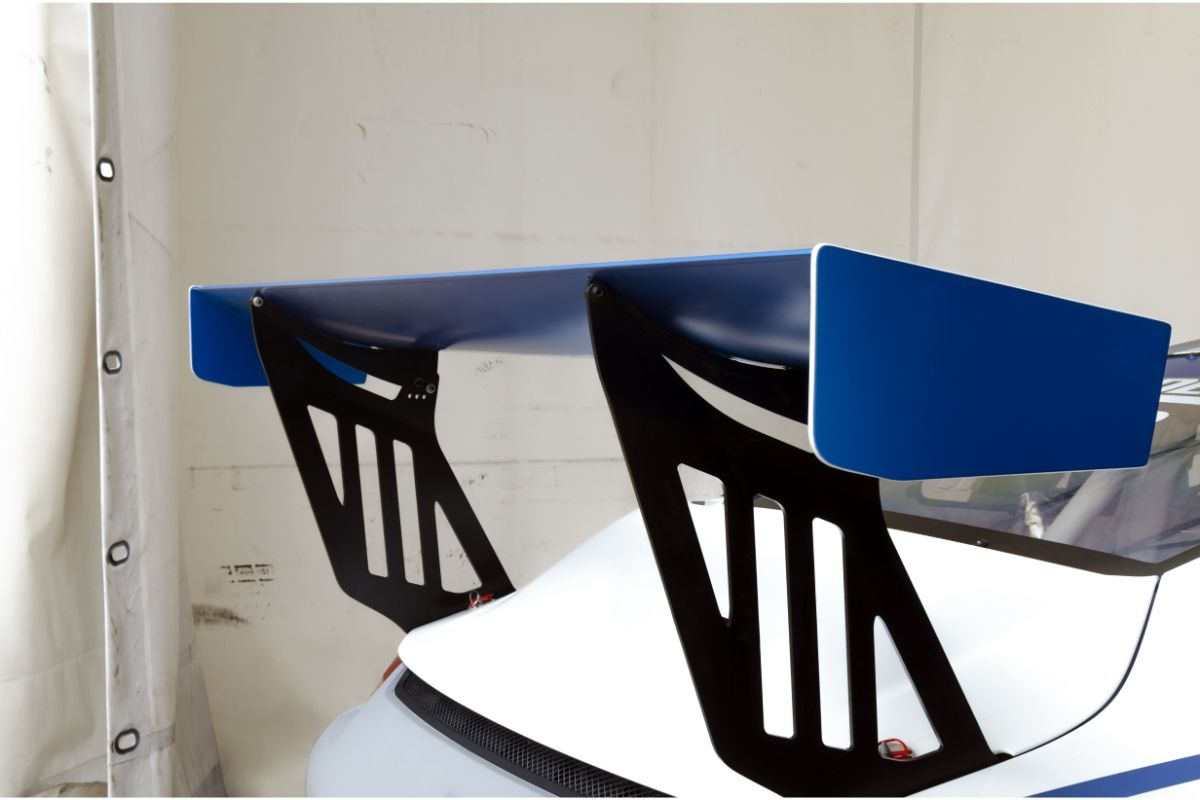 A vehicle’s drag can be decreased by using a spoiler to “spoil” the air surrounding the vehicle.

While you can find spoilers on the front and back of an automobile, for the sake of brevity we’ll only discuss the latter. A low-pressure pocket is formed as air flows over the front of the vehicle and then rapidly splits from the car over the back glass. Drag is produced by the air turbulence created by this low-pressure air. When a vehicle travels through the air, it encounters a force called drag.

A spoiler installed on the trunk’s underside makes a space behind the back window where air may circulate. This airflow reduces resistance and improves efficiency by allowing fresh air to travel over the vehicle’s body without causing any disruptions. To further understand this, please refer to the illustration below.

Is it Possible to Combine a Wing and a Spoiler?

Yes, excellent examples are the LTW and GT versions of the E36 M3. Downforce and reduced drag can be generated by a spoiler or wing independently of one another.

Putting a Spoiler or Wing on Your Car: Necessary or Not? 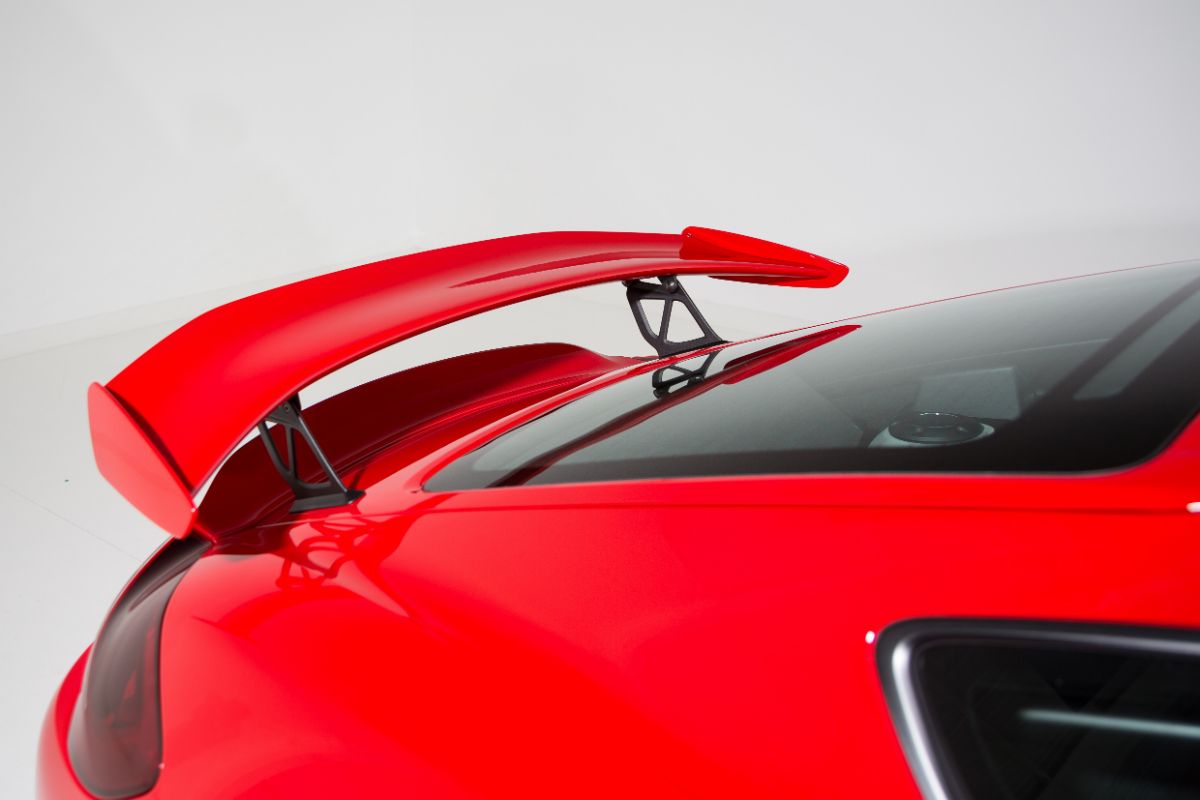 Installation of a wing or spoiler might not always significantly improve your car’s efficiency unless you often engage in high-speed driving. Since aerodynamics is only relevant at very high speeds, this is the case.

In most cases, a wing or spoiler won’t significantly improve your car’s performance unless you often travel at very high speeds.

Due to the high speeds involved in racing, the downforce created by these additions is more useful for rally cars than for regular vehicles. The ordinary passenger vehicle slows down significantly when turning, thus the addition of wings and towards won’t accomplish much for the vehicle’s performance.

Though adding a wing could improve its aesthetics, it probably wouldn’t serve any practical purpose. Important parameters like a wing form design, wing height, wing angle, and wing mounting position are examined in a wind tunnel with multi-million dollar technology.

Among the most typical forms of spoilers are as follows: 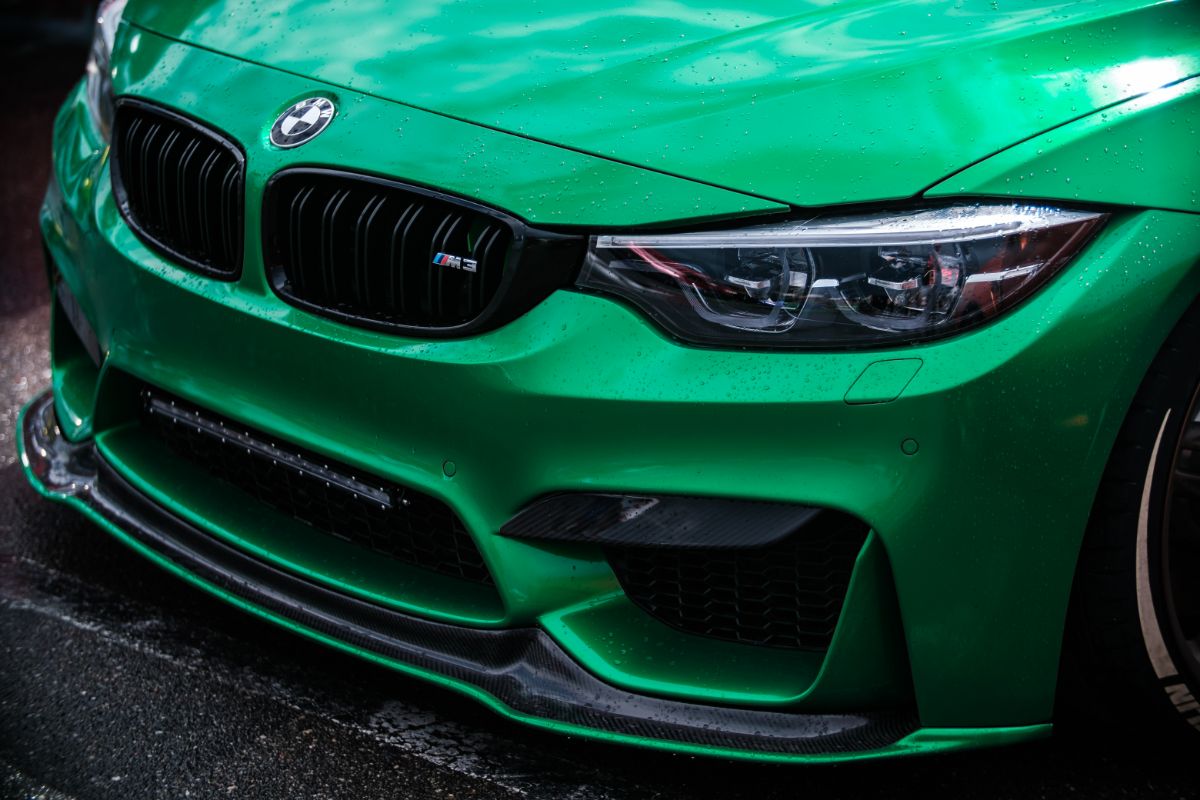 Lip spoilers are versatile and can be mounted either in the front or the rear of a car. When installed on the front of a car, spoilers give the impression of a lower ride height and a longer bumper. However, rear lip spoilers are mounted just below the trunk lid. They are more for show than for performance enhancement.

The trunk of the vehicle is equipped with a pedestal-mounted spoiler. It reduces resistance to forward motion, or aerodynamic drag, and hence aids in producing downward force, which in turn improves efficiency and performance. 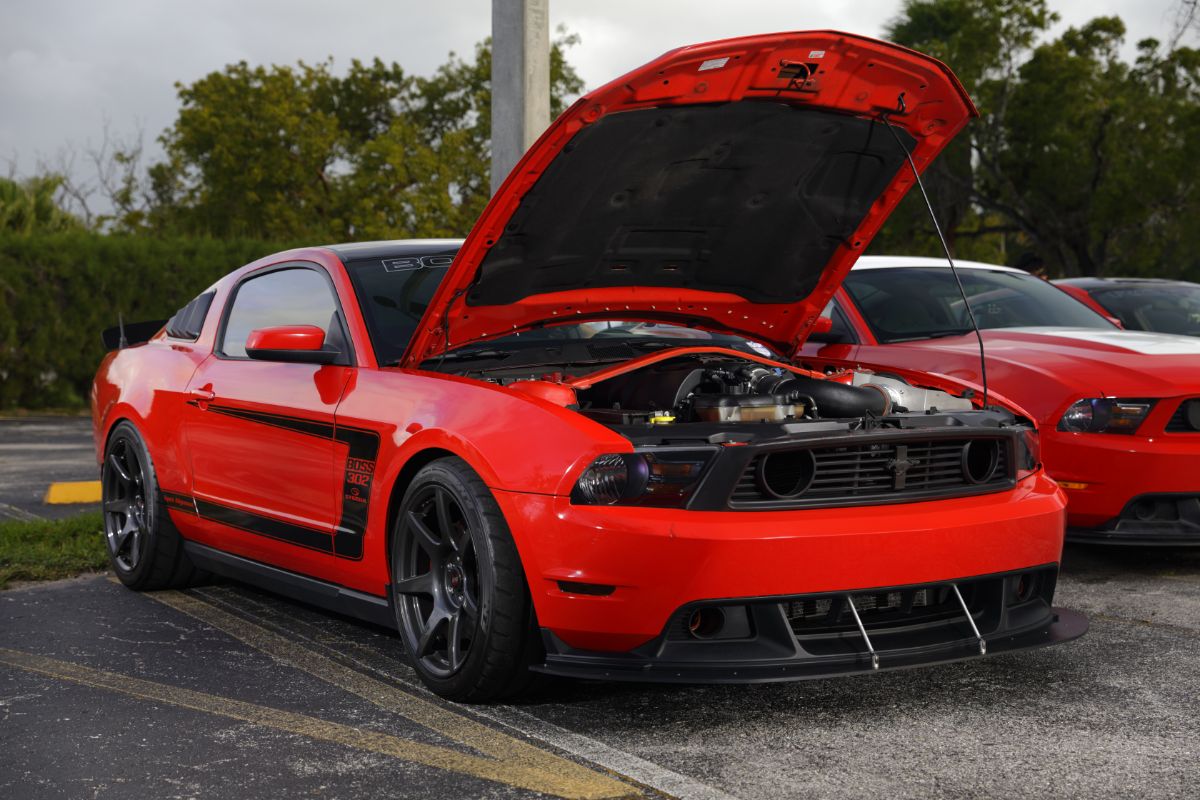 It is the job of the front spoiler, also known as the air dam, to channel air to the radiator. Reduces drag and fuel consumption by preventing air from flowing under the chassis. Commonly found behind the front bumper, it is comprised of metal or plastic and weighs very little.

An automobile’s visibility is enhanced by the addition of additional lighting provided by lighted spoilers. It’s not designed to improve performance, but rather to keep you safe. 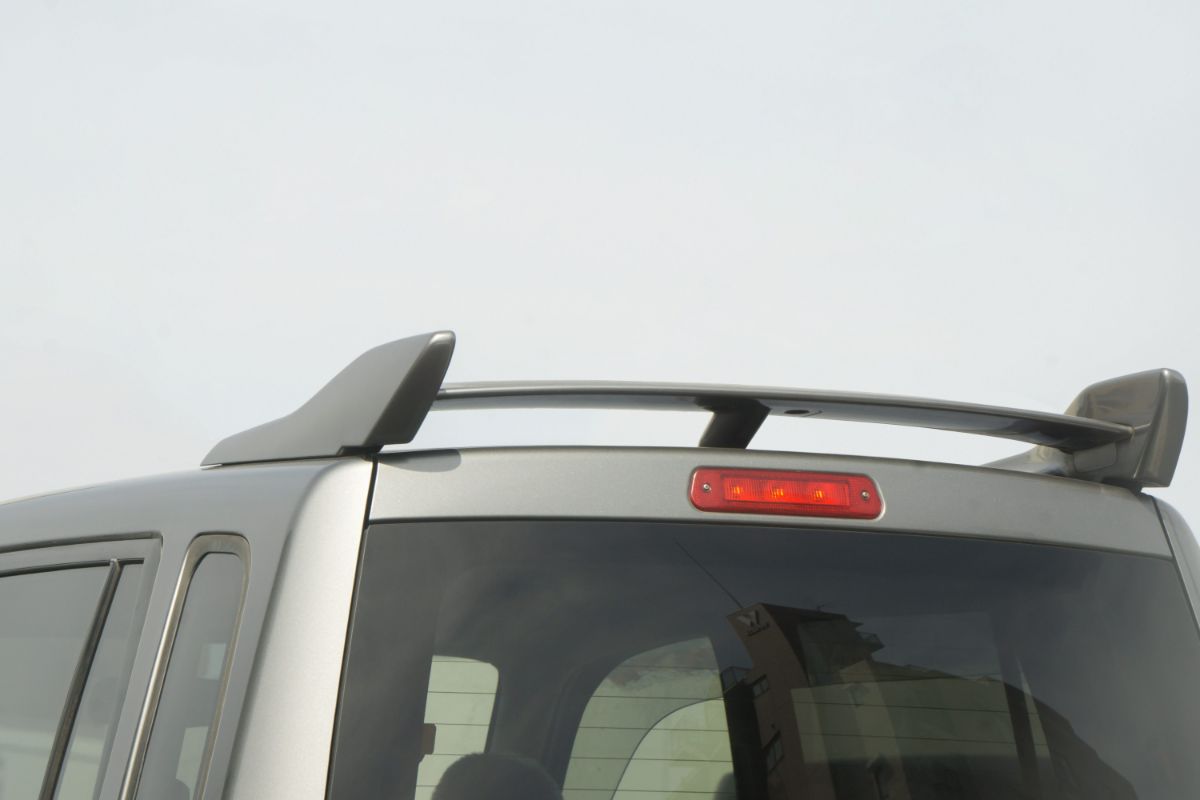 Between the roofline and the back window is where the roof spoiler is fastened. The third brake light is sometimes included with roof spoilers.

Truck spoilers, which are functionally equivalent to roof spoilers, feature integrated brake lights. A side effect is that they make pickup trucks look more menacing.

Unlike spoilers, which come in a wide variety of designs, car wings tend to all look the same. You can choose between a gurney flap and a whale tail. 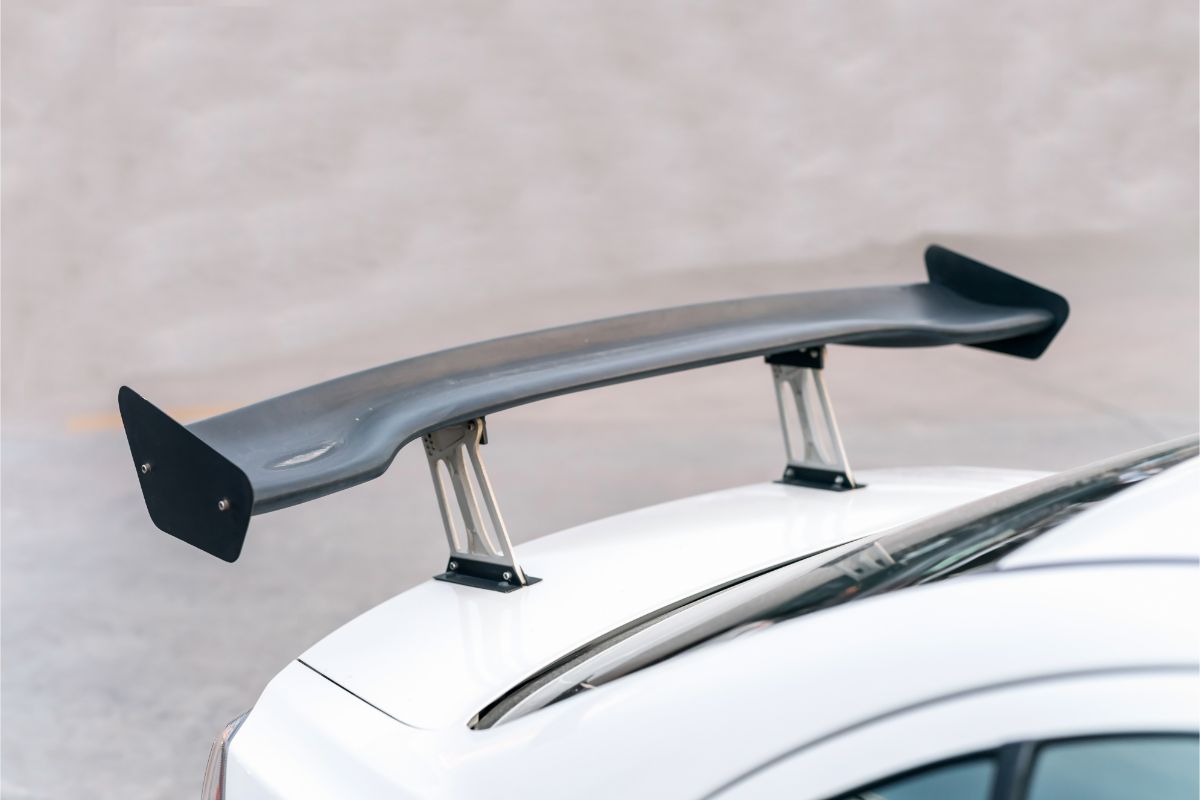 What we call a “wickerbill” or “gurney flap” is just a little tab that sticks out from the forefront of a wing. The gurney flap (if directed upwards) boosts the downforce for increased traction, in contrast to the purely decorative whale tail wings.

Problems Associated with Wings and Spoilers

While adding aerodynamic components like wings and spoilers to a vehicle can greatly enhance its performance and visual appeal, doing so is not without its risks.

Some vehicles, especially earlier models, weren’t designed to have wings or spoilers, thus it may be difficult to obtain spoilers that fit the paintwork. Your vehicle’s appearance could be degraded rather than improved by mismatched accessories. 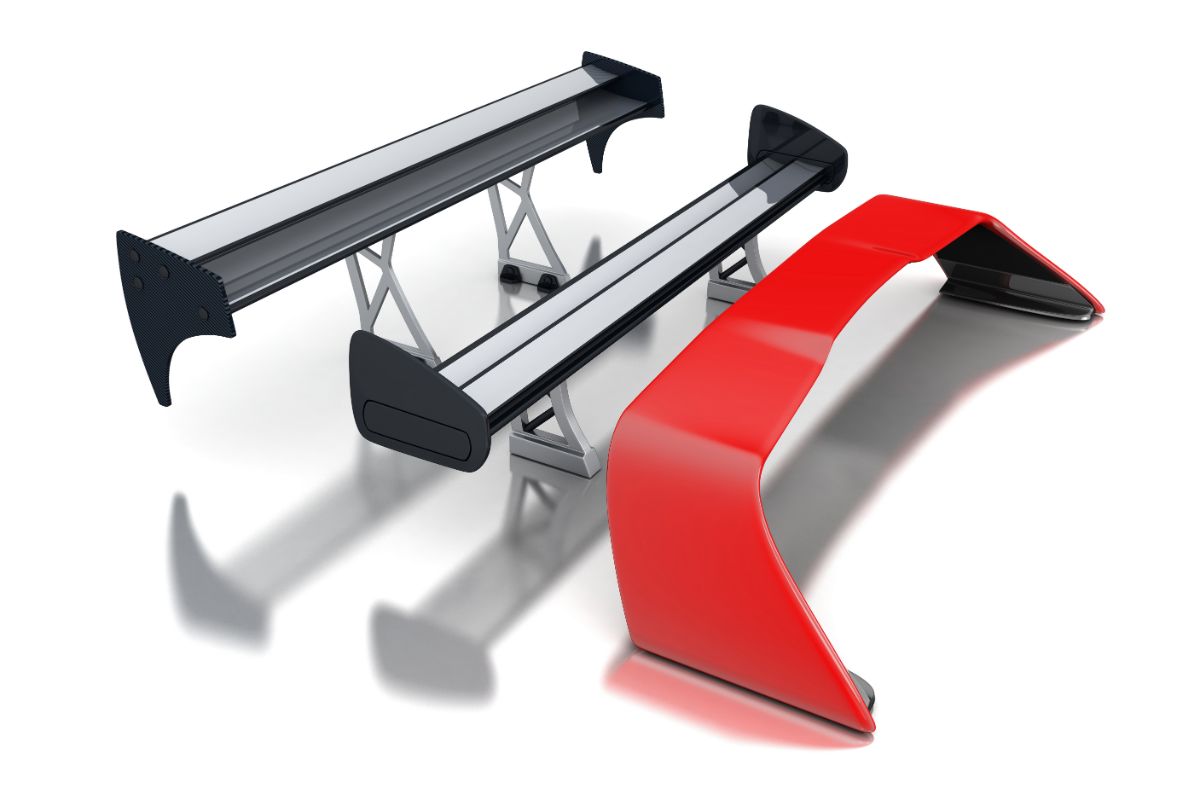 Because of their fragile construction, wings and spoilers are often fashioned from fragile materials like fiberglass and ABS plastic.

The Complexity of Setup

Putting wings or spoilers on a car that wasn’t designed to have them might be tricky. This could lead you to waste money on extra components.

Putting a Spoiler or Wing on Your Car: Necessary or Not?

Due to the high speeds involved in racing, the downforce created by these additions is more useful for rally cars than for regular vehicles. But since most passenger cars slow down while cornering, adding aerodynamic devices like wings & spoilers won’t do much for them other than make them look sportier on the outside.