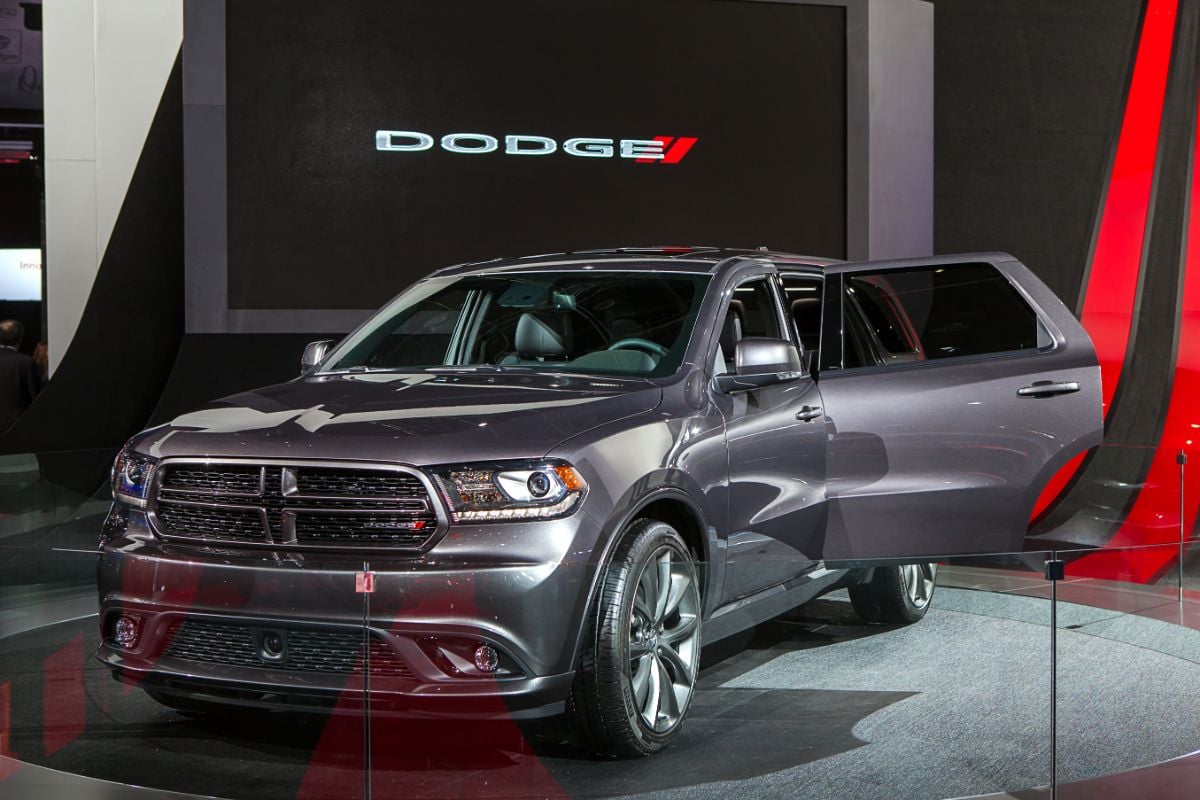 In a landscape of SUVs that are more like glorified vans, the Dodge Durango shines for being a true workhorse. Check out this look at the Durango and its competition to see why it’s the king of the hill.

From the outside, telling the newest Durango apart from the original takes some familiarity with the model. The current generation is just as big and bold at around 16′ long, 7′ wide, and 6′ tall. There’s more sleekness to the angles of its features, but the form holds true to the model’s history.

Once you get in the cabin or look under the hood, the differences between the new and the old generations stand out. 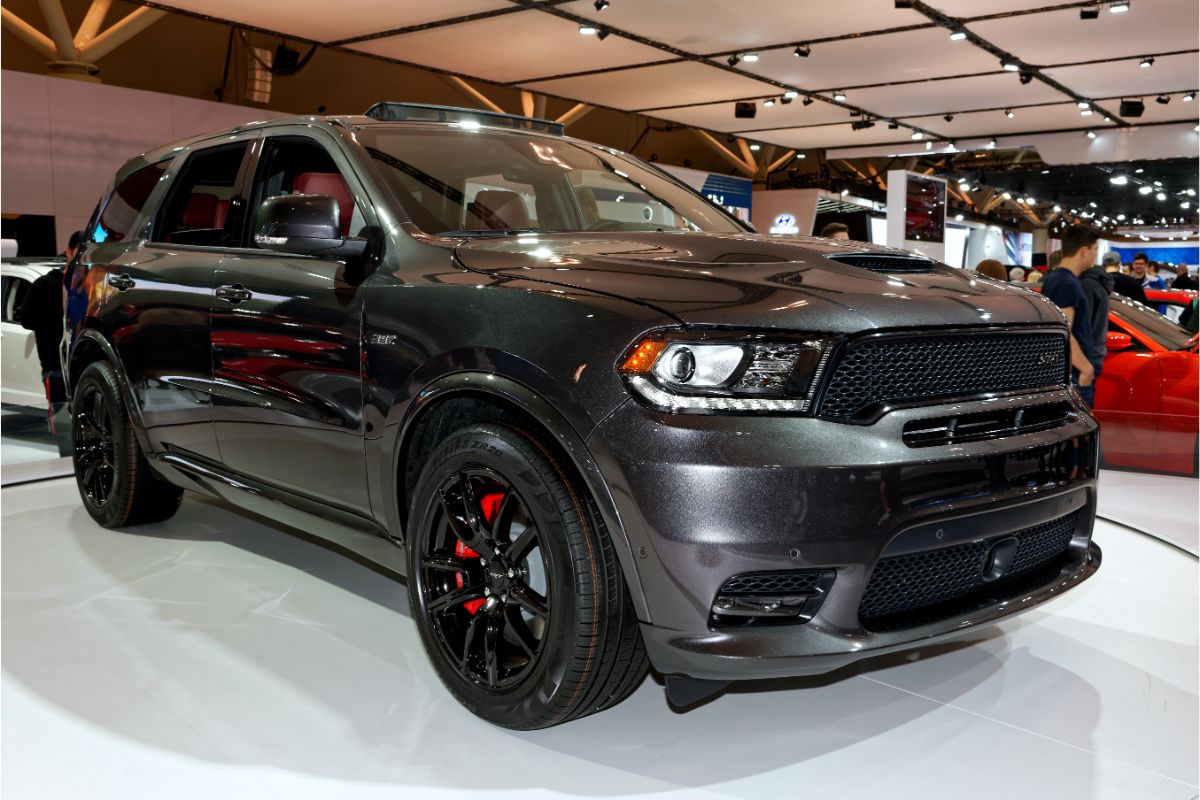 Pricing ranges from The Durango has seven available trims this model year, which is one less than last year but still a hefty spread. All prices listed are the starting MSRP for that trim level.

A 3.6L Pentastar V6 serves as the basic engine, and it’s a decent blend of performance and economy. 6,200 pounds of towing capacity will haul most loads, and 26 mpg on the highway keeps the cost of long trips down. While no speed demon, it accelerates at a respectable 0 to 60 mph time of 7.6 to 8 seconds.

The R/T, Citadel, and R/T Plus all come with the 5.6L HEMI V8. A dramatic jump to 8,700 will haul more than any other midsize SUV available this year. The power surge also goes to the acceleration, pulling the time to hit 60 down to 6.2 seconds.

As you might expect, the bigger engine eats more fuel at 14 mpg city and 22 mpg highway.

The SRT 392’s 6.4L HEMI V8 roars to 60 mph in just 4.4 seconds, which is faster than a fair number of sports cars. The extra price doesn’t push the towing higher than the R/T and R/T Plus, but 8,700 pounds is still plenty of weight on the trailer. All that extra displacement churns through even more fuel, dropping the fuel economy down to 13 mpg city and 19 mpg highway.

All-wheel drive is standard on the SRT 392 and optional on all trims for an additional $2,000. The Durango isn’t the worst at off-roading. 8.1″ of ground clearance is acceptable. Angles for approach, breakover, and departure vary some by trim level, but they range from the upper teens to the low 20s.

It’s not going up a mountainside, but it can deal with a bump in the road. 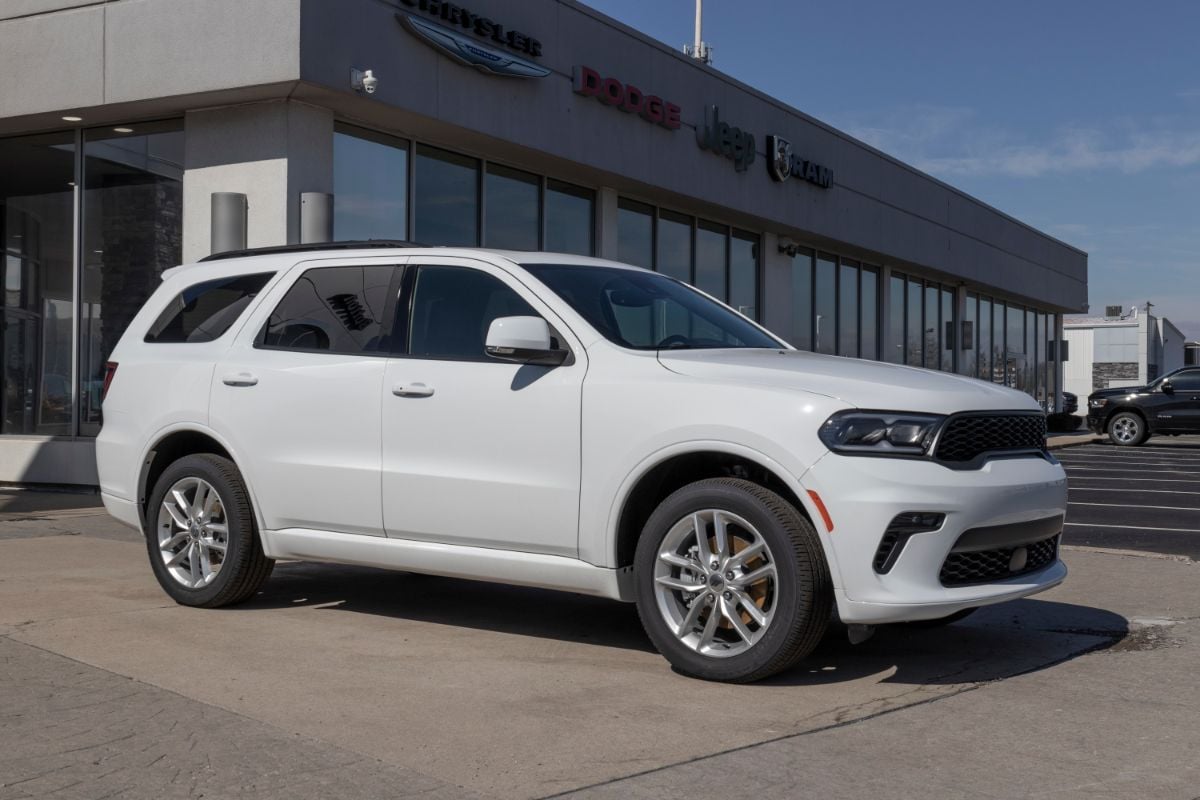 An overall 4-star rating from the National Highway Traffic Safety Administration merits a closer look at why the Durango came up short in the tests. A 21.20% rollover risk does indicate a need to be careful when making sharp turns at high speeds. Other ratings are mostly acceptable but solidly into the 4-star overall range.

The NHTSA lists a lack of a lane departure warning option, but a lane keep assist feature comes on the GT Plus trim and upwards. The full list of features is fairly extensive, including a rear back-up camera and electronic stability control on all Durangos.

The workhorse still has plenty of play inside of its 141 cubic feet of passenger volume. There’s seating for 7 when using all three rows, but the third row can be permanently removed in some trims for a 5-passenger build. 17.1 cubic feet of cargo space without cutting into passenger space is decent, and getting them out of the way expands that to 85.1.

Each trim level has a Uconnect touchscreen display with satellite radio, Android Auto, and Apple CarPlay. Trims from the R/T upwards bump the 8.4″ screen to a 10.1″. 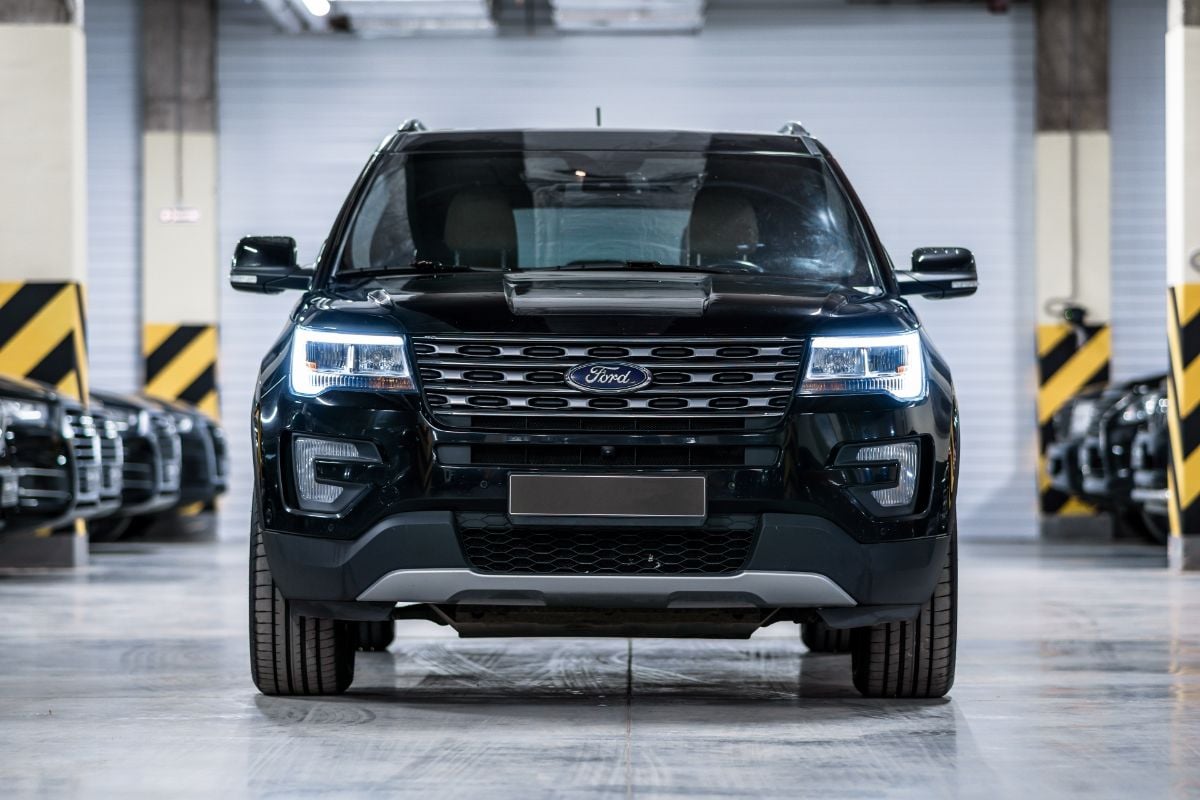 The Explorer serves better as a family vehicle, especially if you go for the hybrid engines on the Limited and Platinum trims. Up to 27 mpg in the city will use less than half the fuel of an SRT 392. The price band on its MSRP is lower, too, starting at $33,745 for the basic Explorer and capping at the $53,995 King Ranch trim.

The interior has a bit more room despite a slightly smaller frame. Active parking assistance helps parallel park the sizable SUV on city streets. The addition of a configurable driver display puts the Explorer one digital screen ahead of the Durango.

Only 5,300 pounds of towing capacity is woefully far behind the Durango even before upgrading one to a HEMI. On the flip side, the Explorer’s acceleration is 5.6 seconds, or better than every Durango except the SRT 392. If you’re not towing anything, the two handle off-roading about the same. 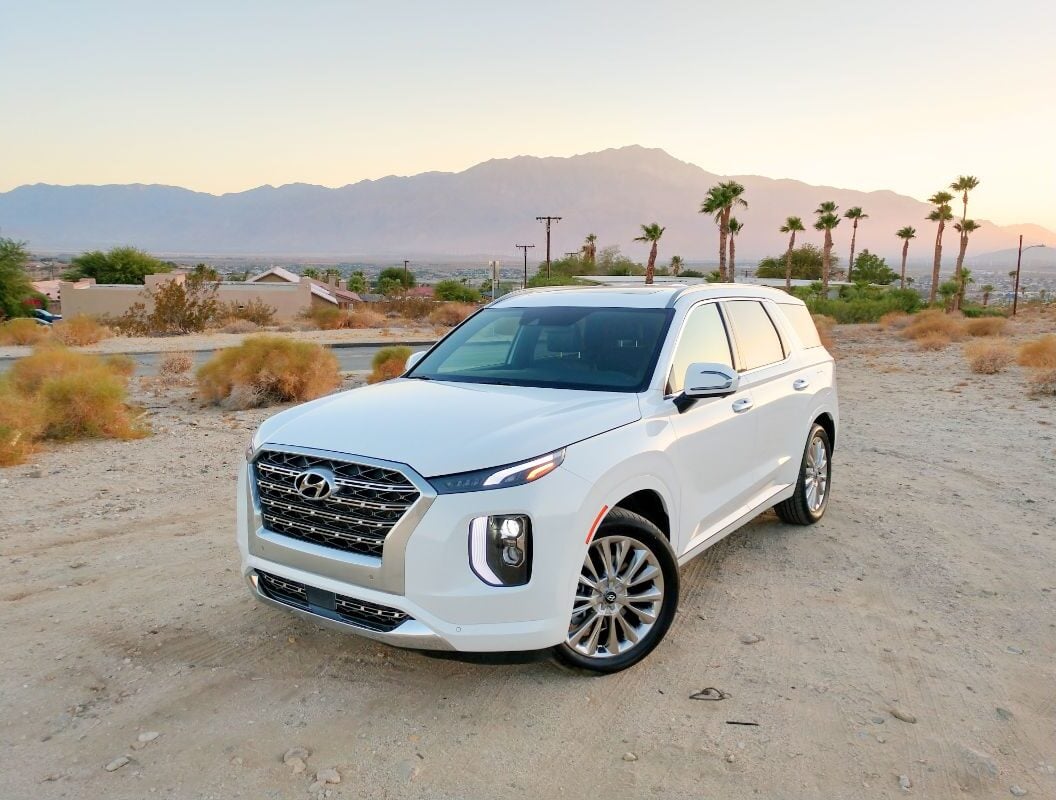 The Telluride is on par with the lower trim levels of the Durango. For a slightly faster acceleration, the Telluride loses 1,200 pounds of towing capacity. Fuel economy is comparable at up to 20 mpg city and 26 mpg highway.

Leaning into its role as a daily driver, a wide range of tech safety features and infotainment are packed into nearly every system. The exterior cameras let you see everything around the vehicle from the display with full 360-degree coverage and an aerial view. An overall 5-star safety rating provides more peace of mind when driving the kids around, and you can fit an extra one in there with 8-passenger seating.

All of this comes at a lower starting MSRP, making it a competitive alternative if you’re leaning towards the Durango SXT or one of the GT trims but don’t need a maxed-out towing capacity. With all the bells and whistles, the price still competes with the GT Plus. 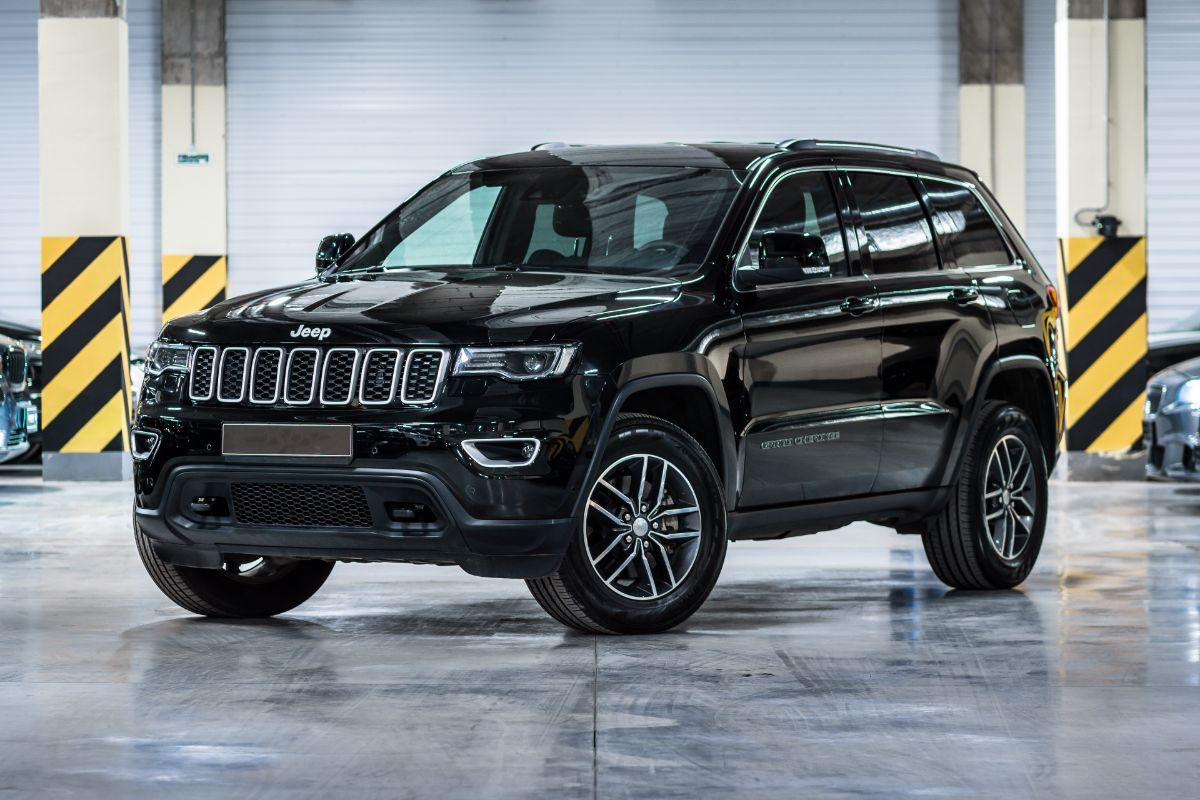 In many ways, the Cherokee is the Durango with the touch of off-roading knowledge offered by Jeep as a manufacturer. Core performance metrics are similar, but the benefits of upgrading the trim level differ in how they improve performance.

No major power upgrades are available, so you’re stuck with the 6,200-pound towing capacity. If you’re serious about riding over bumps, the Trailhawk trim has Jeep’s official Trail Rated badge. You must sacrifice the third row to select it, but the improvements to handling are worth the price.

Infotainment in the Grand Cherokee is the hands-down winner. The passenger gets their very own screen that can be used for both aiding the driver or entertaining themselves.

Other Vehicles Similar to the Dodge Durango 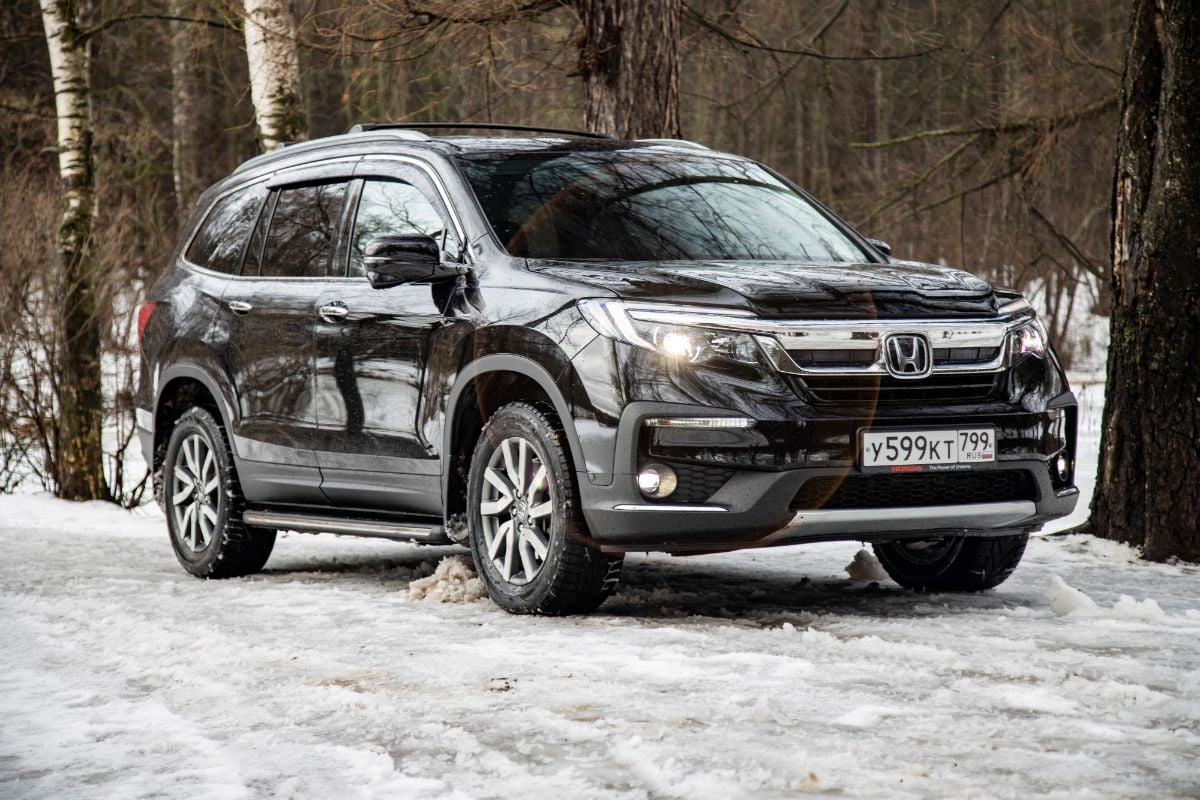 Although each trim sticks with a 3.5L V6, the Pilot managed a spry 6.2 seconds for its 0 to 60 time. Keeping the engine small helps fuel efficiency, getting the economy of the lower Durango trims with the power of the middle tier.

Seating can go up to 8 depending on the trim and configuration. The interior is roomy at 152.9 cubic feet of passenger volume with a minimal drop in cargo volume.

Most safety features like lane keeping assist and the back-up camera are standard, but you’ll need to add on the front and rear parking sensors. A 5-star overall NHTSA rating is only marred by its 4-star overall frontal crash rating and rollover rating.

The key downside is the loss of towing power. A nearly 4,000-pound drop to a max of 5,000 hurts if you’re looking for raw strength in your SUV. Adding the additional towing capacity to move up from the base 3,500 pounds increases the price by forcing you to select AWD and have an ATF cooler installed.

As long as you are sticking to the lower-cost trims on both the Durango and the Pilot, the comparison works. The power of the Durango simply outshines the Pilot at higher trims for comparable costs. 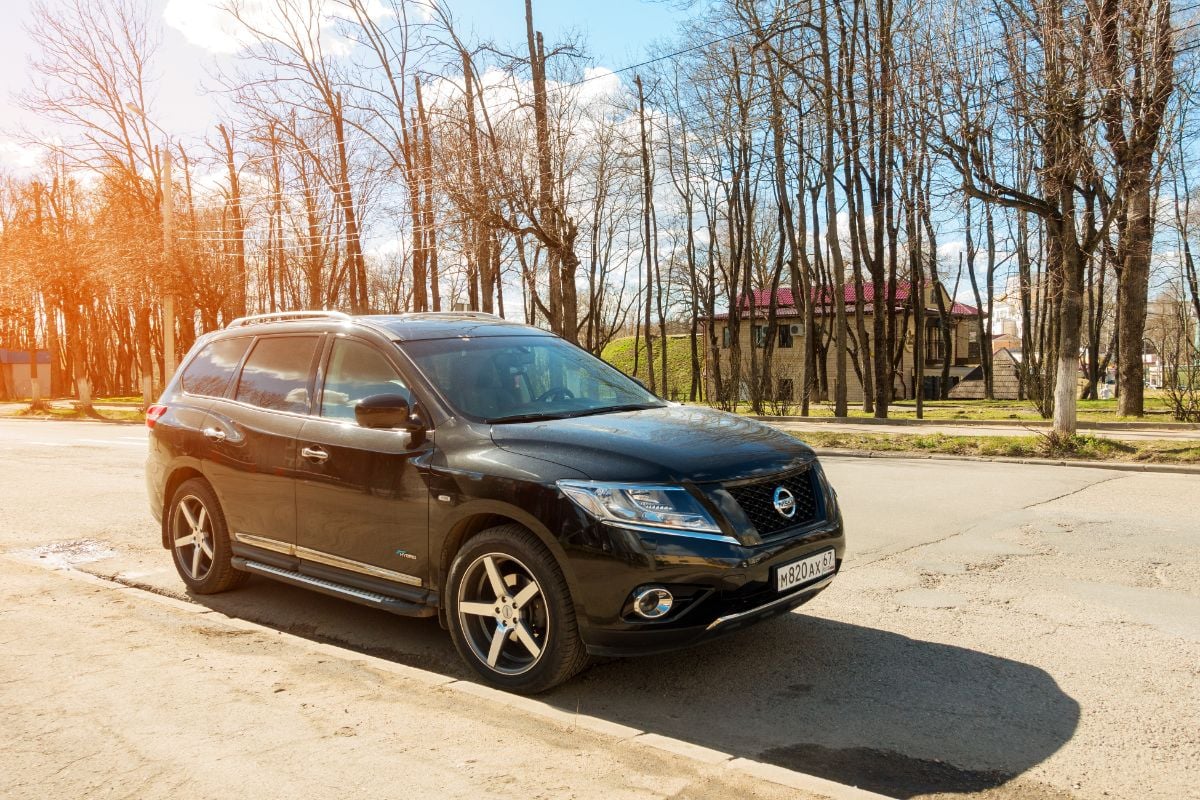 Despite the name, this SUV is better at traveling the path that’s already been taken. It’s not that you can’t take it off the road, but the angles are subpar with a lower ground clearance than the Durango. Its 3.5L V6 will take on the Durango’s 3.6L trims on a straightaway, though.

The starting 3,500-pound towing capacity can barely manage to tow a motorcycle, ATV, or lightweight fishing boat. At the top end, it’s still weaker than the Durango with a 6,000-pound maximum.

These woes plague the Pathfinder, but it is incredibly affordable and on par with the fuel economy of other mid-sized SUVs with combustion engines. Safety features and infotainment are also excellent for the price. Like the Telluride, the suite of cameras and on-board computer can create an aerial composite view. 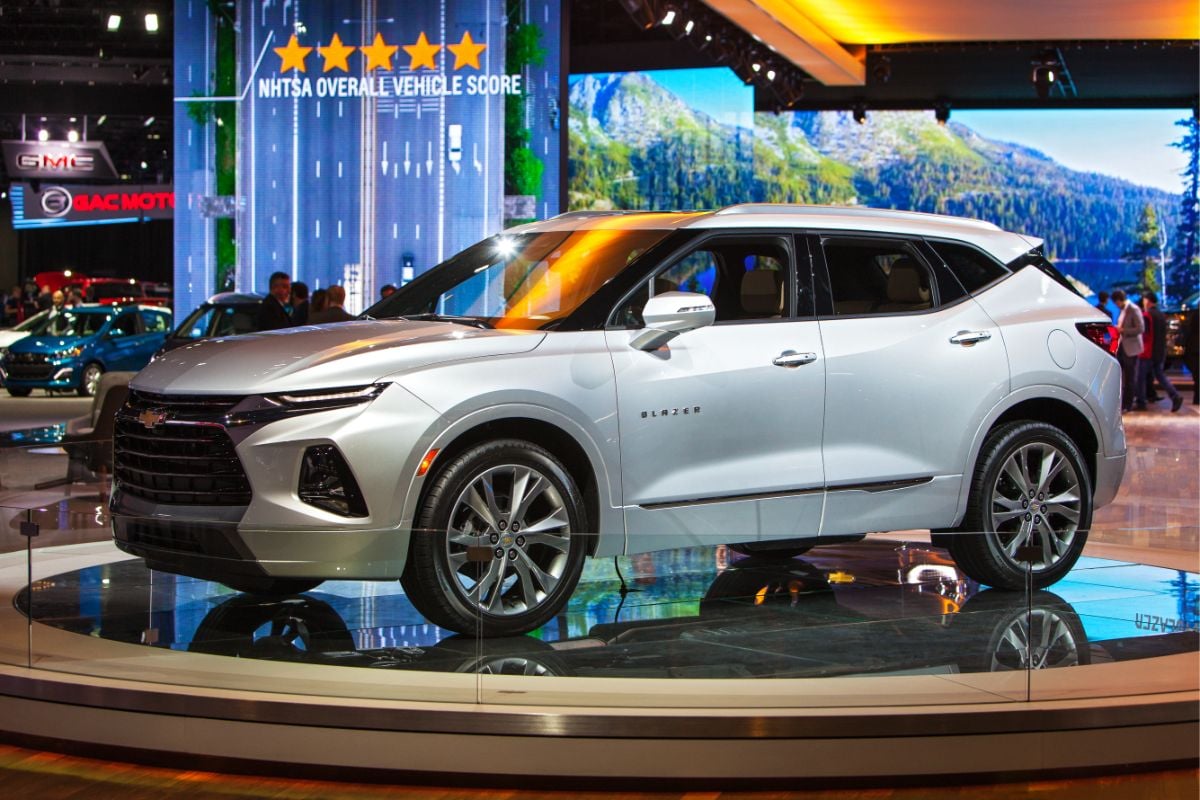 First, the bad news. The towing capacity on the Blazer is atrociously low at 1,500 pounds before add-ons. Even with the full suite, it tops out at 4,500 pounds. 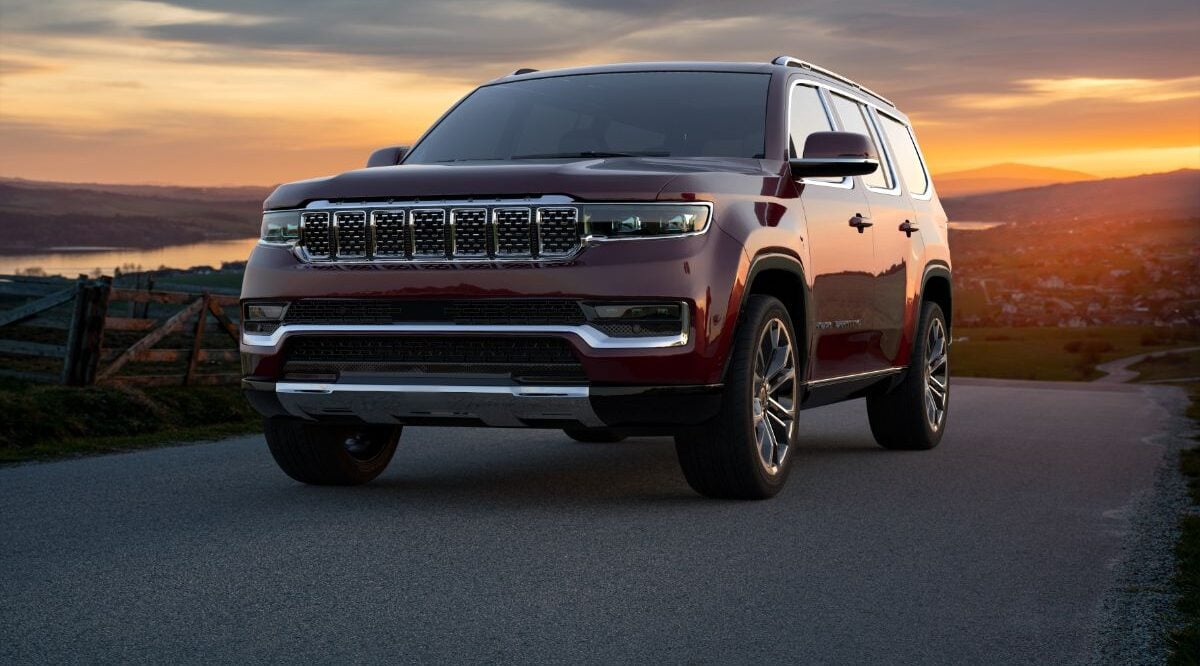 The full-sized Wagoneer has extra space over the Durango with its exceptionally roomy 179.2 cubic feet of passenger volume that can seat 8. Acceleration is on par with the 5.6L Durangos, but the SRT 392 is hard to catch.

If the 8,700 pounds of towing on the HEMI trims of the Durango simply aren’t enough, the Wagoneer can haul up to 10,000 pounds. Jeep considers the Wagoneer too large and clunky for the maneuverability requirements of its Trail Rated label, but it can handle off-roading anywhere with enough room.

A few problems keep the Wagoneer from a higher rating. Defects have forced several recalls of the Wagoneer this year, and some were linked to potential safety concerns like disabled air bags and a glitching rear-view camera. Additionally, the Wagoneer line is the premium for Jeep’s SUVs. You’ll pay more for a basic Wagoneer than nearly any Durango build. 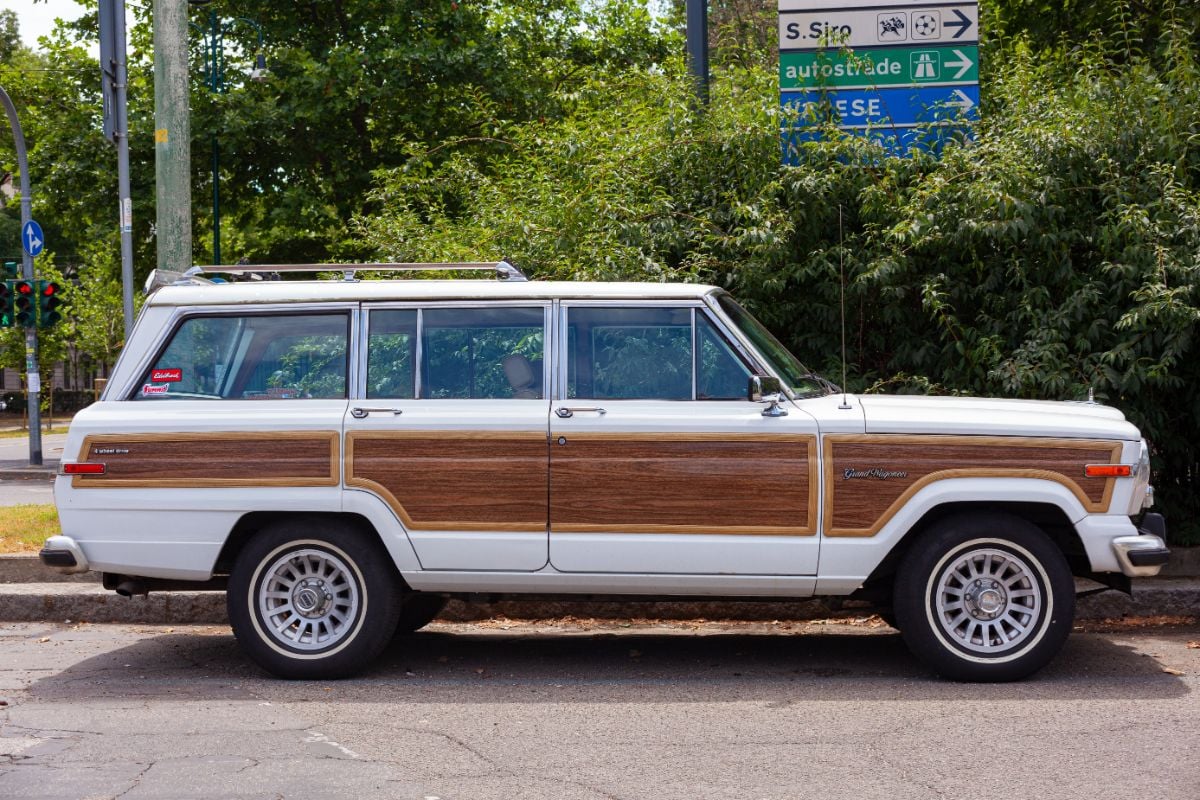 The Grand Wagoneer may as well be the high level trim selection for the Wagoneer. Like the Wagoneer, the only thing keeping it from being a Trail Rated Jeep is its size. Towing capacity falls to 9,850 pounds, but that’s still an absurdly high number.

You get even more screens added to the main console.  The passenger gets their own touchscreen that enhances their navigation and music management duties, and the displays on the backs of the headrests can run two different shows or games for the kids at the same time.

The multitude of recalls for the Wagoneer also apply to the Grand Wagoneer, and the pricing issue rockets into the stratosphere with a starting MSRP of $88,640. If those don’t scare you away, consider it if you’re hunting for a luxury option with blue-collar performance. 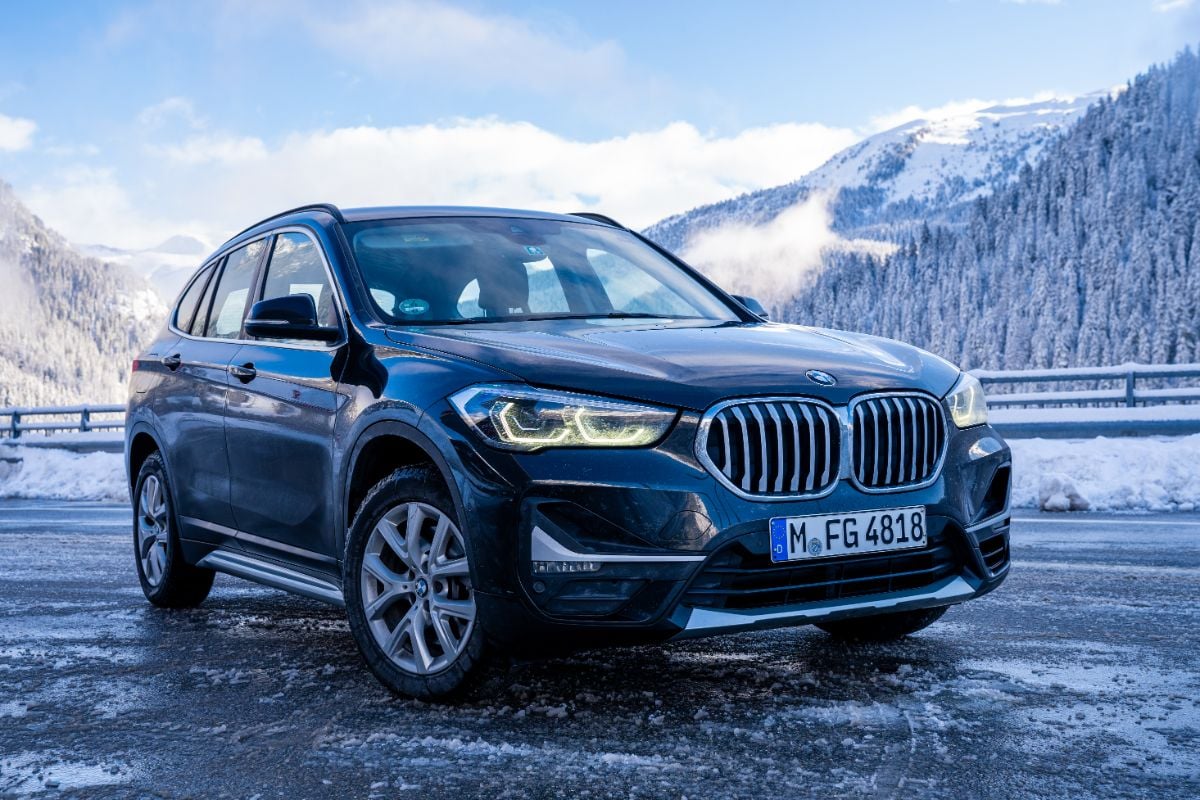 The Durango’s price is relatively reasonable for a mid-sized SUV. Dropping a size category to the compact varieties opens up new luxury options without increasing the total price.

The interior volume drops down to just two rows of seats, and the towing capacity is completely foregone. On the plus side, fuel economy reaches up to 24 mpg city and 33 mpg highway. A 2.0L turbocharged V4 gets the X1 to 60 mph in 6.3 seconds, so you get the same road performance as the 5.6L Durangos at a lower price and cost of driving. 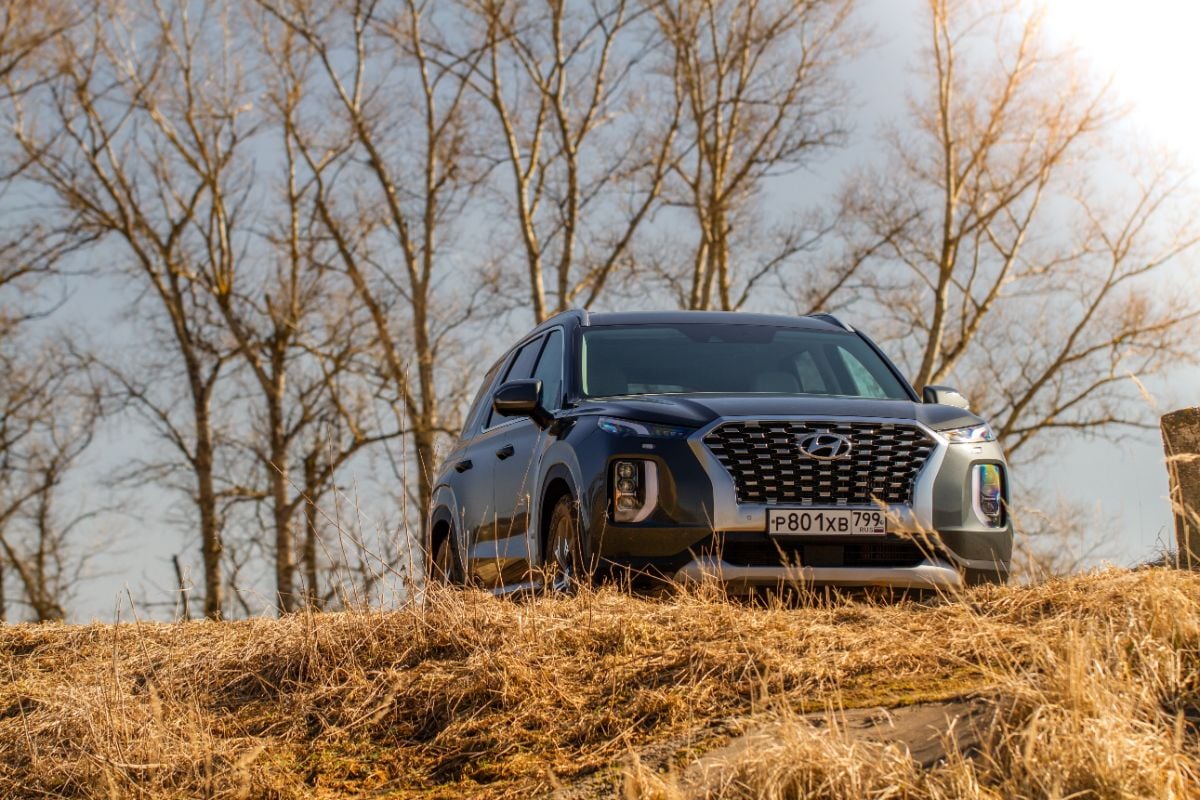 Here we have another mid-sized SUV that competes heavily with the lower Durango trims – as long as you don’t look at the towing capacity. Most of the comments about the others also apply here, but the Palisade is slightly more expensive than the Telluride while not offering quite the same deal in return. 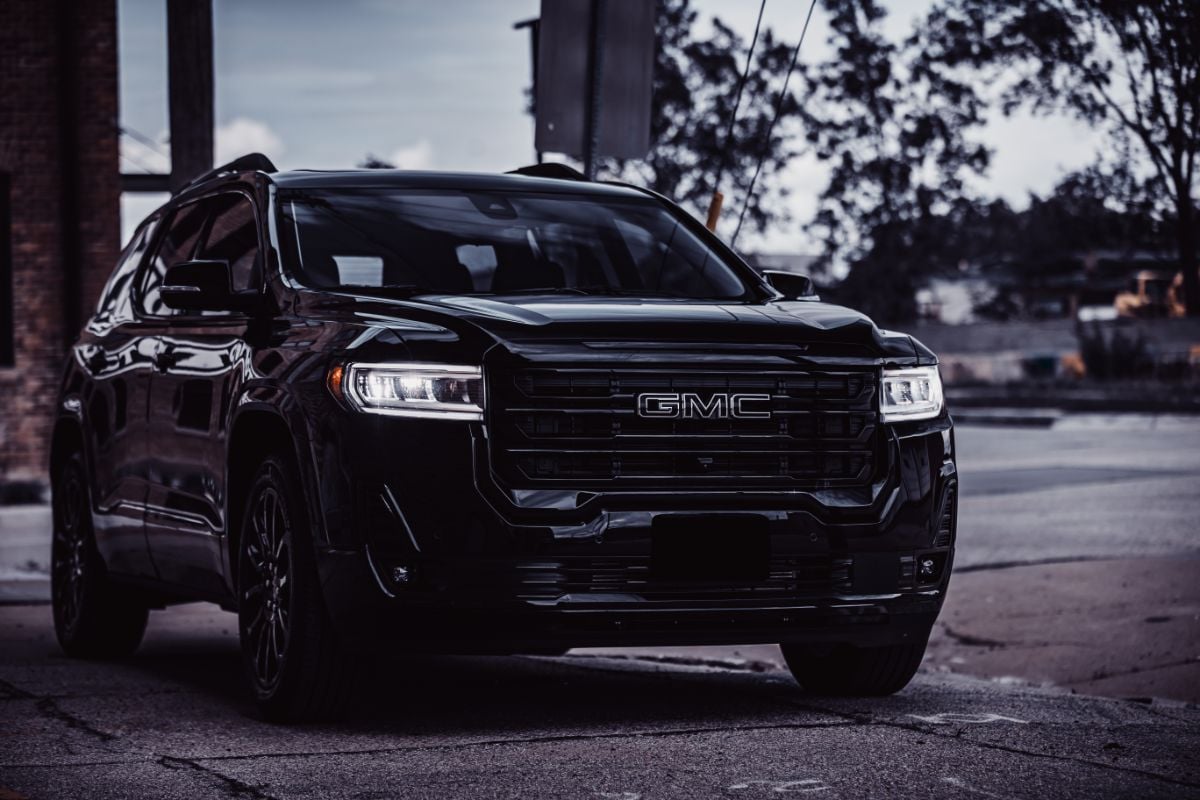 The Acadia slips in the bracket under the R/T and higher trims.29 mpg on the highway is one of the highest on the list. With better acceleration on its SLT trim with the 3.6L V6 engine option, it becomes a cozy family SUV for roadtrips.

Like many mid-sized SUVs besides the Durango, it simply can’t touch the Durango’s towing capacity. Decent overall performance keeps the Acadia within striking distance. The field of similar SUVs leaves it struggling to receive notice, but it’s at least worth a look while you’re shopping. 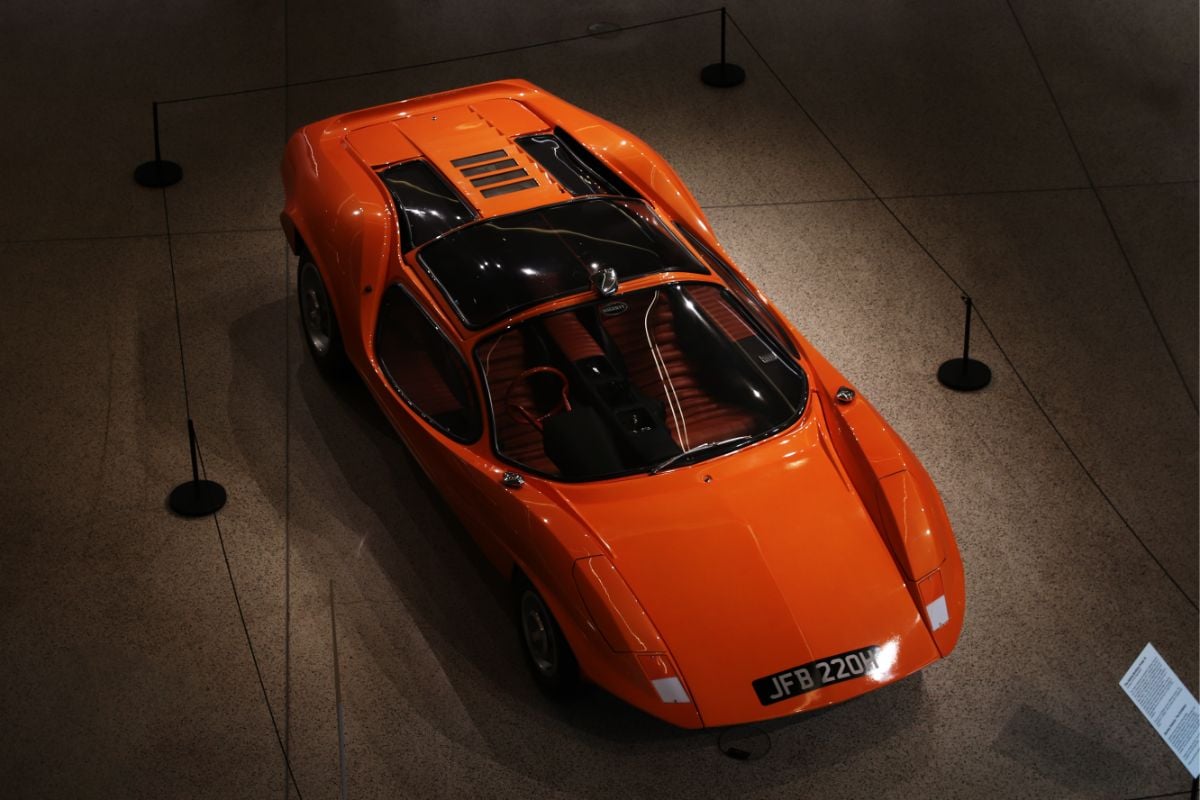 The Probe 16 isn’t actually similar to the Durango, but it borrowed the name long before the SUV line existed. The limited-run concept car starred in A Clockwork Orange under the name “Durango 95”. Rob Zombie sang about this car in his song Never Gonna Stop.