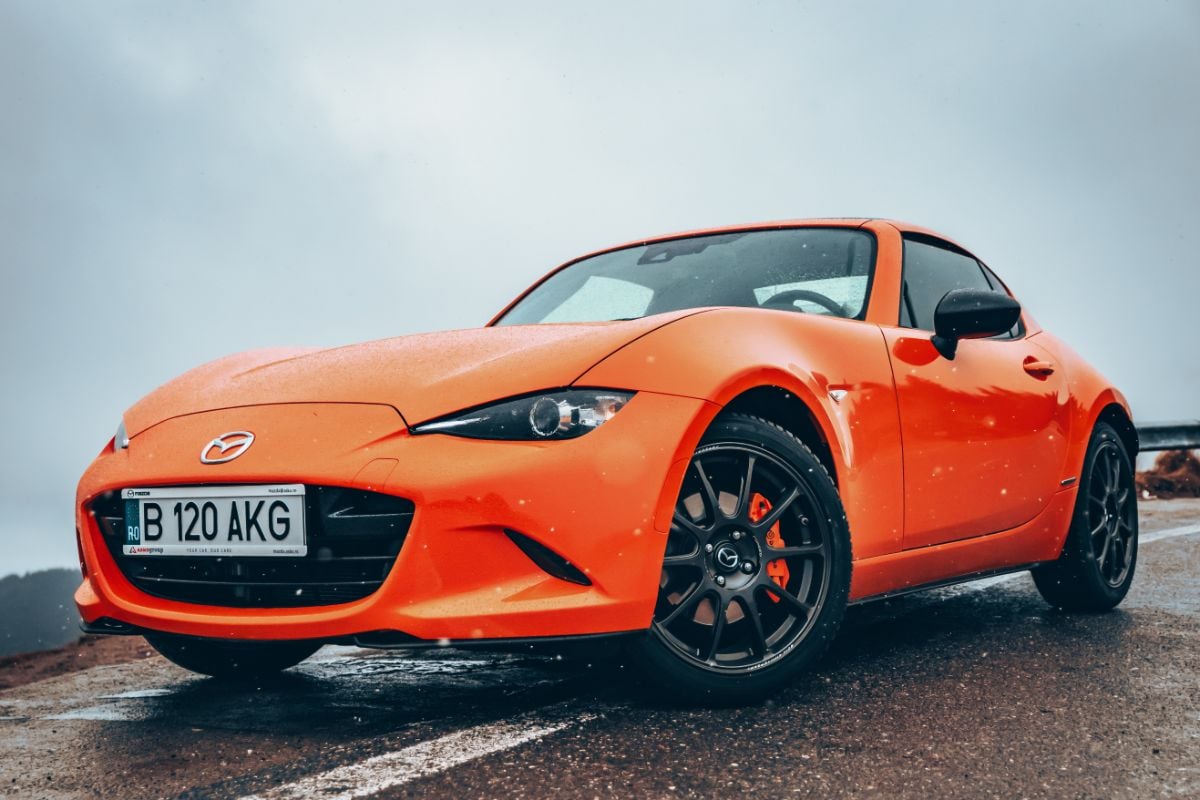 The 1970s saw car manufacturers remove convertibles from their lineups when rollover safety standards were enacted in 1968. Due to this, the convertible Cadillacs, Buicks, Chryslers, Lincolns, the wonderful little MG and MGBs, beautifully balanced Fiats, and Alfa Romeos were gone.

Then came the designers from Mazda who wanted a car for driving enthusiasts and those who dared to go topless. Thus, the Mazda Miata was born in 1989. Many marques have worked hard to replicate the open-air, sports car vibe of the Mazda MX5 Miata.

In its 33rd year of production, fourth generation, and a tweak in 2019, the Mazda is an iconic roadster with a well-earned reputation. After its introduction to the market, other manufacturers followed. Today, many convertibles are available, are affordable, and include soft and hardtop models.

Available in three trim levels, the Mazda Miata MX5 comes as a sport with an MSRP of $27,650. Second in line is the Club model, which starts at $31,150. All the trim levels are equipped with a manual transmission. However, only the top-level Grand Touring is available with an automatic transmission.

Power for all three models comes from Mazda’s SkyActiv-G 2.0 L 4-cylinder, producing 181 horsepower and 151-pound feet of torque. Power goes to the rear wheels via a six-speed manual transmission. The optional automatic is also a six-speed and has paddle shifters for quick gear changes.

Fuel mileage for all models is identical and returns 26 city and 35 highway miles per gallon. With the manual transmission, the zero to 60 time of the 2022 Mazda MX5 is 5.7 seconds. You do not drive a Miata, you wear it, and the 2022 MX5 is not a bad way to dress when going out.

Cars most similar to the Mazda MX5 Miata

The next three are most like the MX5 Miata in size, price, and power of all the cars in this list. 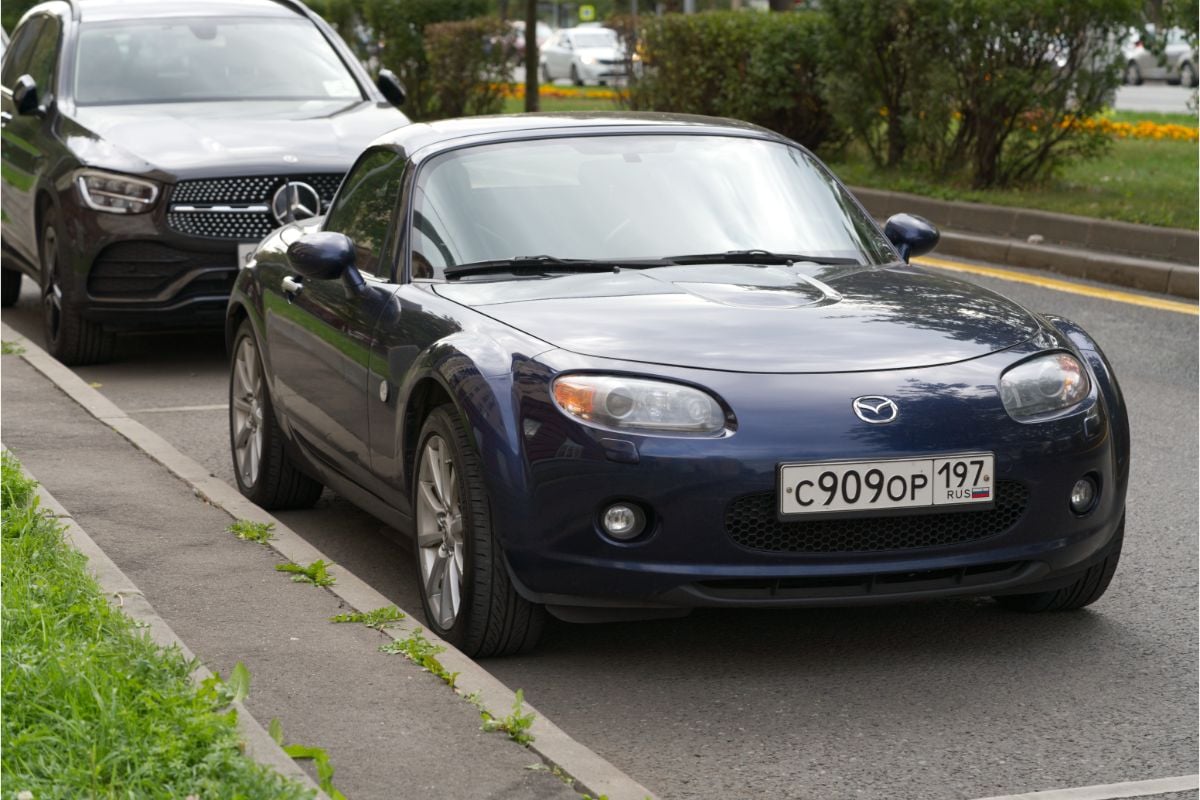 The RF (retractable fastback) model Miata MX5 is a convertible hardtop. This little car is stiffer and less noisy than when equipped with a ragtop. It is the most similar car to the Mazda MX5 Miata because it still is one; it is just wearing a hardhat instead of a cap.

When choosing this model, you will lose a tenth of a second from zero to 60 times, as the RF turns the run into 5.8 seconds. However, the hardtop does add a few pounds to the weight of the MX5, which could be a factor.

Power comes from the same Mazda’s 2.0 L 4-cylinder, producing the same 181 horsepower and 151-pound feet of torque. Fuel mileage is also similar and is 26 city/35 highway and 30 combined miles per gallon. 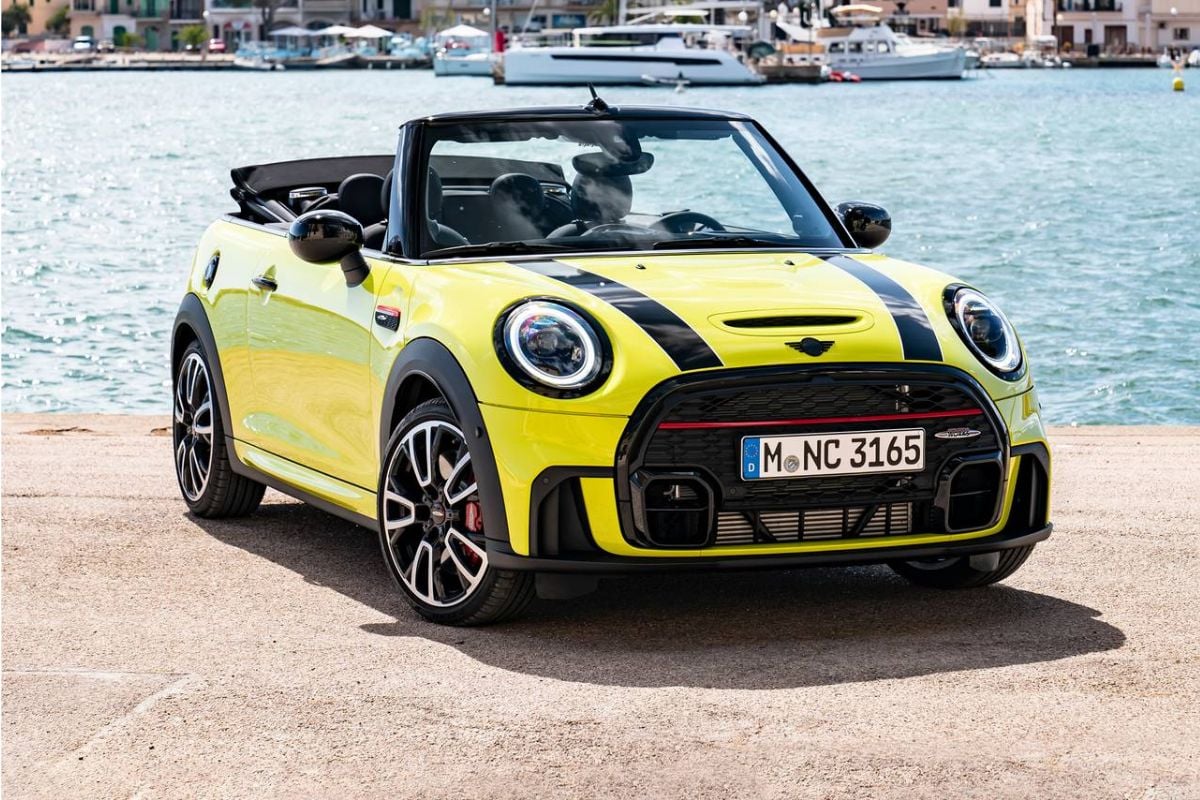 The Mini Cooper convertible is available in three trim levels, with three power options. The Mini Cooper has a starting MSRP of $33,800, the Cooper S comes in at $37,400, and the John Cooper Works starts at $46,225. All can drop their tops; however, each model is more powerful than the next.

The power of the base Mini Cooper convertible only brings 134 horsepower to the table. But, powered by a TwinPower Turbo 1.5 L 3-cylinder, the Mini Cooper can run from zero to 60 in 8.2 seconds. However, fuel mileage is 29 city/38 highway and 32 combined miles per gallon.

The Cooper S model is equipped with a TwinPower Turbo that displaces 2.0 liters and produces 189 horsepower and 206-pound feet of torque. This configuration drops the zero to 60 times to 6.7 seconds. In addition, the Cooper S returns 30 combined miles per gallon.

When the 2.0 liter four is put into the John Cooper Works, it will be tuned to put out 228 horsepower and 235-pound feet of torque that will take this little car from 0-60 mph in 6.3 seconds. Unfortunately, the John Cooper Works gets 28 combined miles per gallon, but oh, the fun! 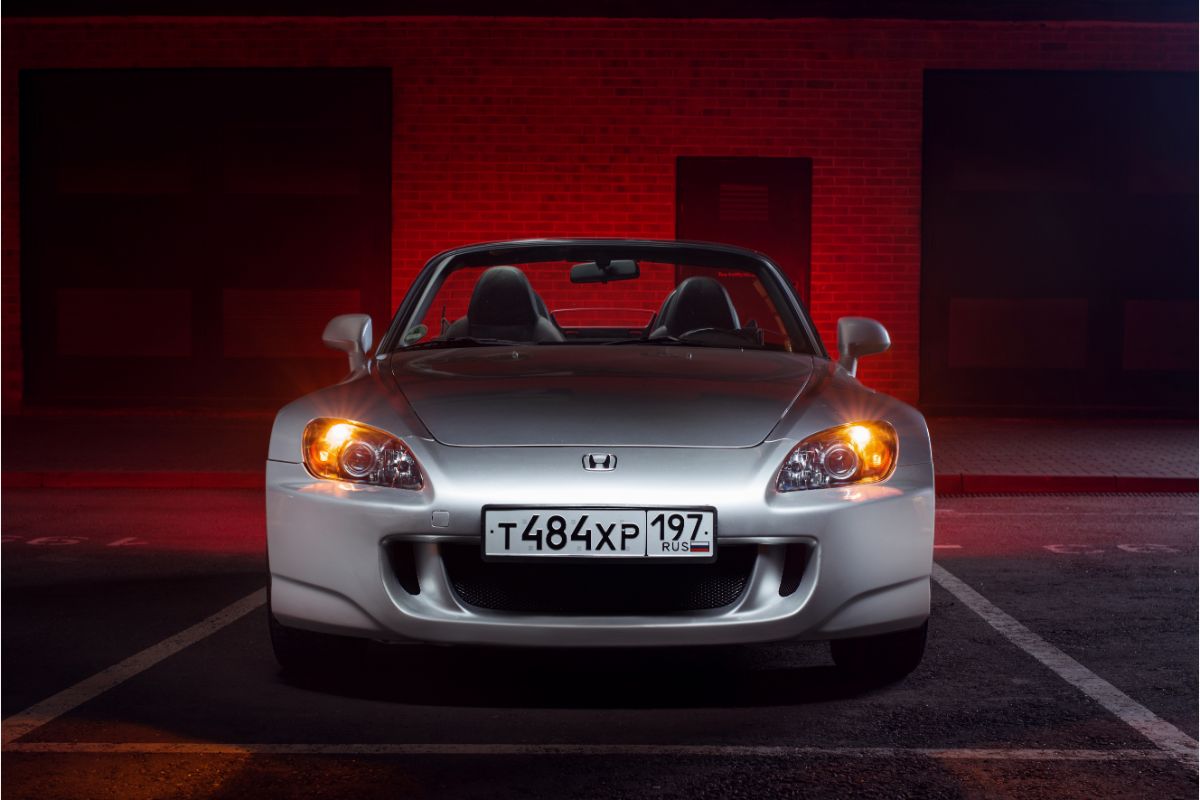 The Honda S2000 had the highest output per liter with its 2.0-liter four-cylinder ever produced at the time. A result of a 237 horsepower engine bolted to a six-speed gearbox gave the Honda S2000 a 0-60 time of about 5.9 seconds. Fuel mileage comes in at 18 city and 25 highway miles per gallon.

Other cars similar to the Mazda MX5 Miata convertible 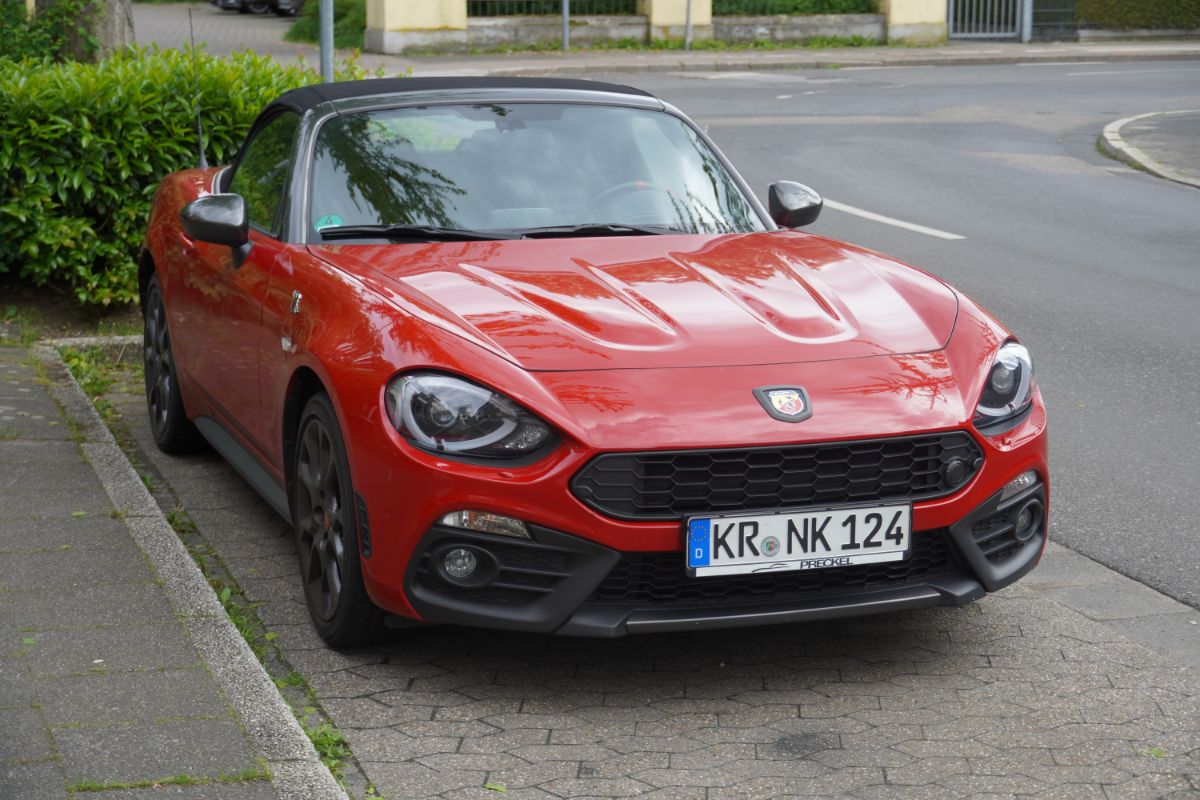 In 2016, Fiat reintroduced the 124 Spider to the American market, powered by a 1.4 L MultiAir Turbocharged 4-cylinder that produces 164 horsepower. The fuel economy of this model is 26 city and 35 highway miles per gallon. However, if you look, you can still find 2016 to 2019 models similar in price and size to the Mazda MX5. 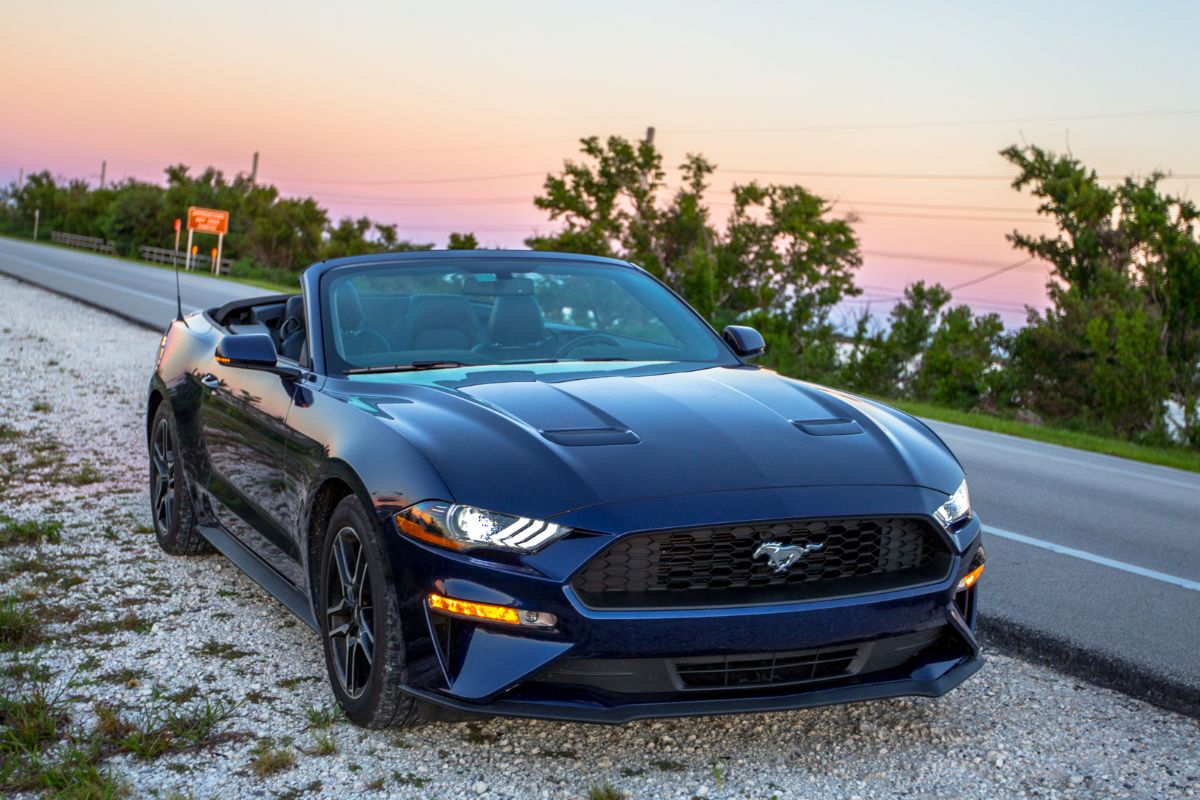 There are three trim levels for the 2022 Ford Mustang Convertible. The base model Mustang EcoBoost® Convertible is powered by a 2.3 L EcoBoost engine that produces 310 horsepower and 350 pound-feet of torque. This power will propel the Mustang from zero to 60 in 5.1 seconds.

Fuel mileage for the Mustang EcoBoost convertible is 21 city/30 highway and 24 combined miles per gallon. The standard transmission in the Mustang is a six-speed manual. However, there is an option ten-speed SelectShift automatic for those who want the shifting done for them. 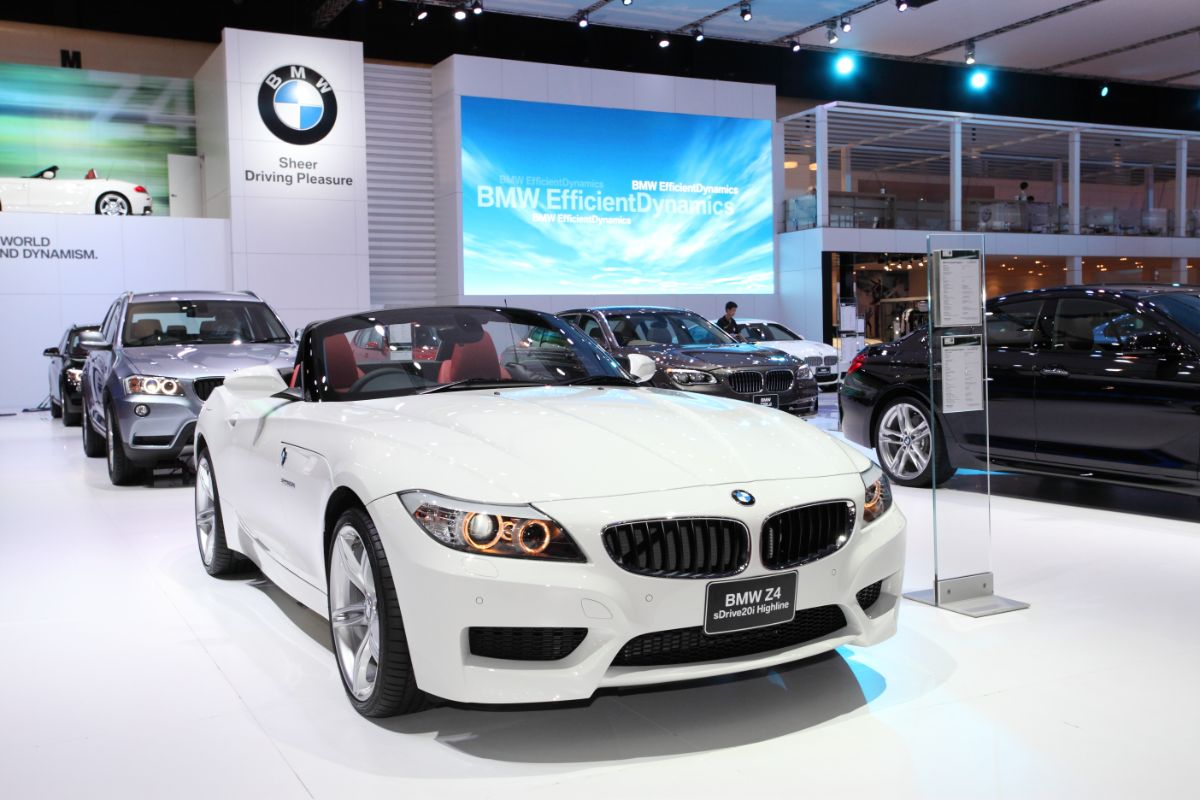 Another pair of icons, the BMW Z3 and Z4 models, is similar to the Mazda MX because they are both convertibles that are rear-wheel drive. Built from 1989 to 1992, 1995 to 2016, and since 2018, the only Z model available is the Z4. Although a quick search turns up used models for sale, the only thing better than a new BMW is a classic, and they are available if you look.

A TwinPower turbocharged 4-cylinder engine produces 255 horsepower and can race the little Bimmer from zero to 60 mph in 5.2 seconds, powering the core model Z4. Fuel mileage for this model is vague but should return about 32 combined miles per gallon.

The Z4 M40i gets BMWs, a historical 3.0L inline six-cylinder with TwinPower turbos. This engine produces 382 horsepower and 368-pound feet of torque, which is enough power to move the M40i to 60 mph, from a standing start, in 3.9 seconds. Like the Core Z4, fuel mileage should be about 26 miles per gallon on the highway.

For something entirely different, yet in the spirit of the topless car, the Caterham Seven series of cars harken to a day gone by yet have modern conveniences and engines. These instant classics range from about $57,000 for the base model Caterham Seven and can run up to over $110,000 for the top-of-the-line Caterham Seven 620.

Based on the Lotus Seven platform, thus the name, a 2.0L Ford Duratec inline 4-cylinder powers the 360. This engine produces 182 horsepower and 194-pound feet of torque. Its run-up to 60 mph from a standstill takes 4.8 seconds.

The top-tier Caterham Seven is powered by a supercharged 2.0 L Ford Duratec 4-cylinder. This engine produces 314 horsepower and 219 pound-feet of torque and can propel this roadster from zero to 60 mph in 3.44 seconds.

The Caterham is built in the UK. However, one of their dealerships in the United States will be glad to put you behind the wheel of one of their cars. 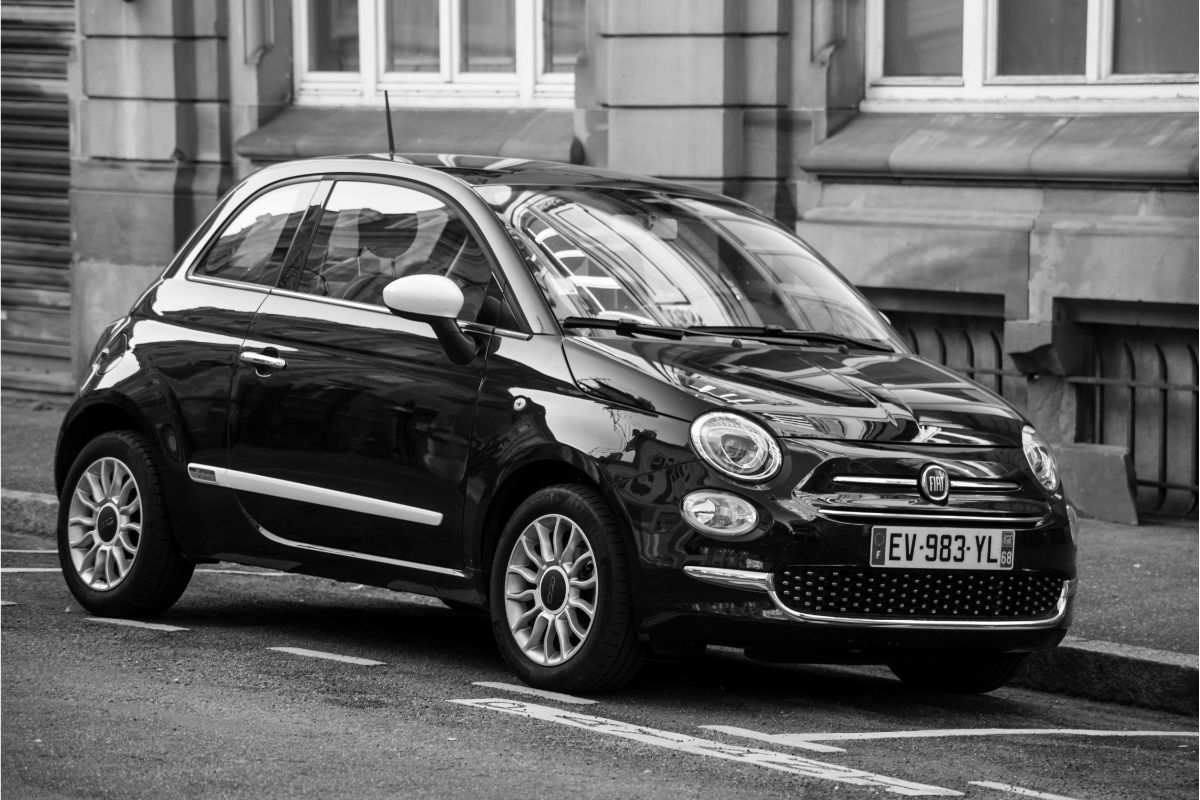 Like the Fiat 124, the Fiat 500C is no longer in production, but you can find it for sale across the country. They are similar to the Mazda MX5 in price, size, and power. It is also a cabriolet style car, with a canvas roof that slides back instead of one that will fold down. So, you get the open-air feel of a convertible with the safety of a full-bodied car.

However, the only new Fiat currently being produced is the 500X POP four-door with standard all-wheel drive. The only thing about it that is similar to the Mazda MX5 is they both have four-wheel and four-cylinder power plants. 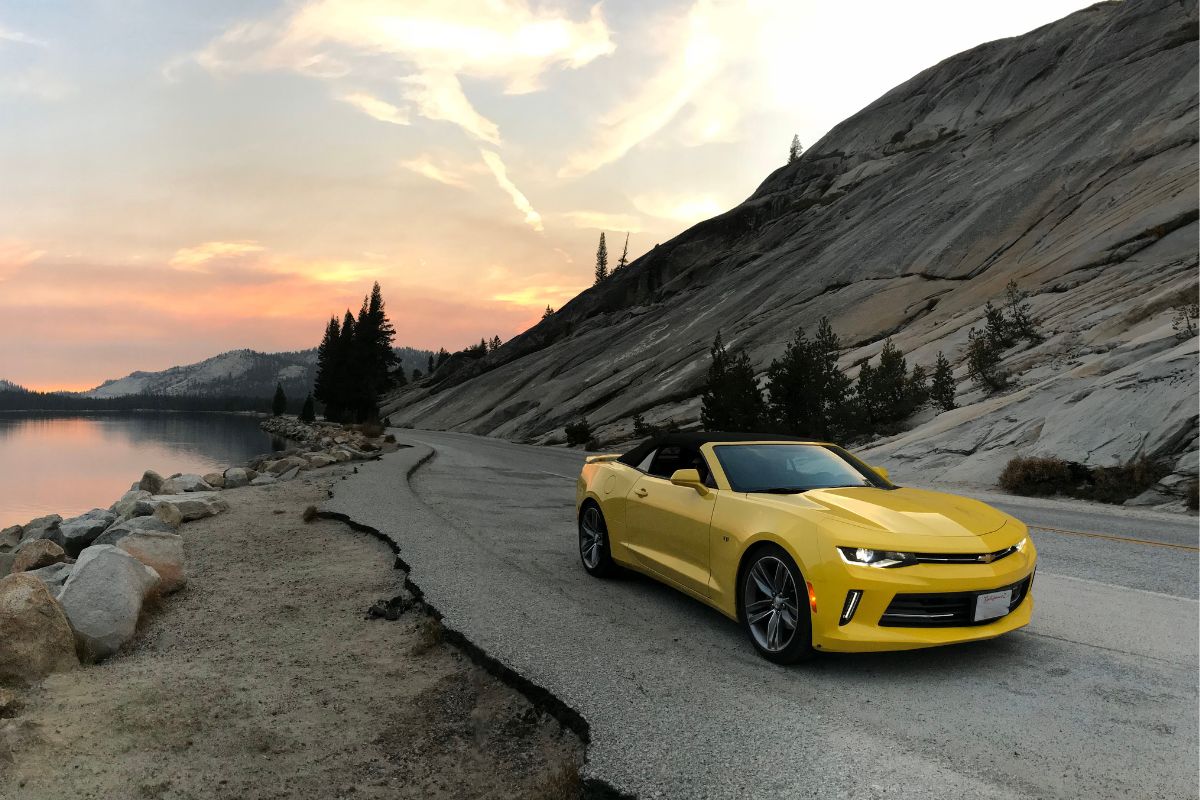 More of a pony than a muscle car, unless powered adequately, the similarity between this car and the Mazda MX5 is they are both convertibles and have a  starting MSRP of around $30,000. However, what you get for that amount with a Camaro is proper seating for five.

Power for the Camaro LT1 convertible comes from a turbocharged 2.0L 4-cylinder that develops 275 horsepower and 295 pound-feet of torque. It is connected to a six-speed gearbox that drives the rear wheels and can reach 60 mph from a standstill in 4.1 seconds. Fuel mileage for this model is 19 city/29 highway and 22 combined miles per gallon. 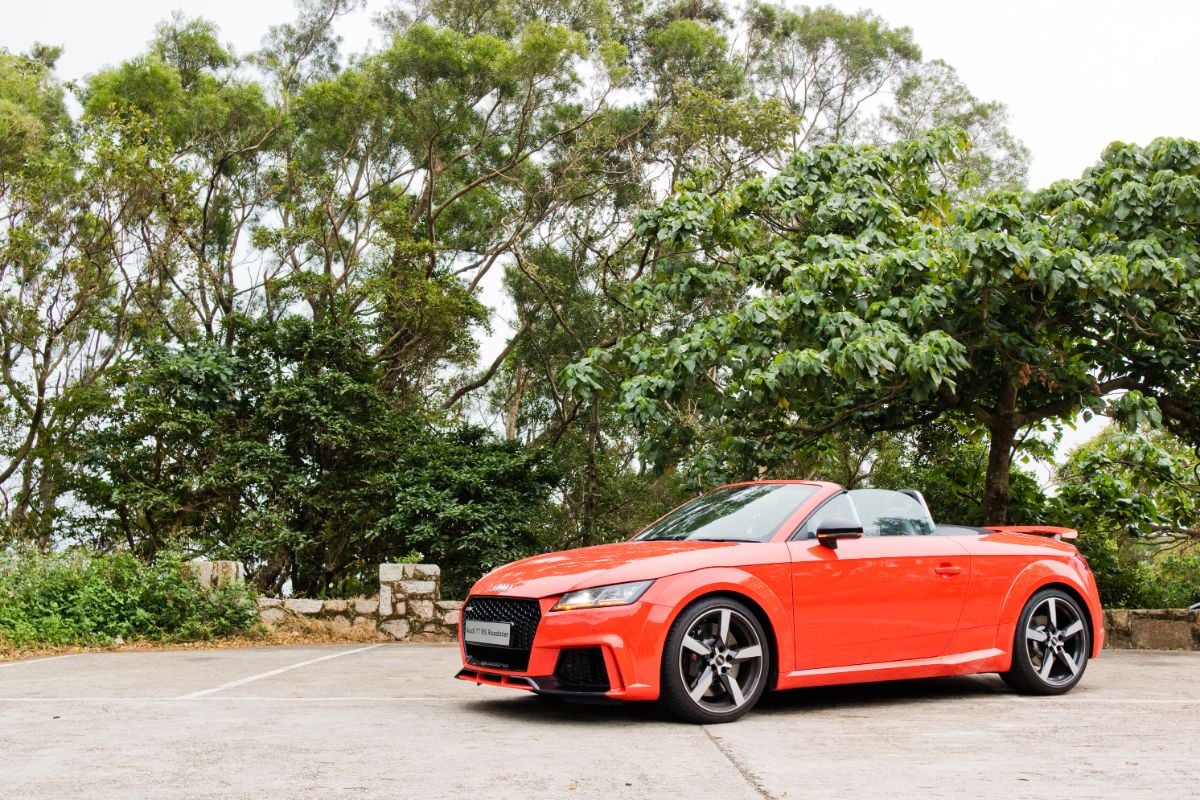 Since 1998, the Audi TT has stood the test of time in uninterrupted production. Available in four trim levels for 2022, three for the coupe, and one convertible roadster. The 2022 TT Roadster, however, is the most similar to the Mazda MX5. Moreover, its starting MSRP of $54,600 for the Audi TT convertible is higher than the Miata.

The Audi TT is powered by a turbocharged 2.0L 4-cylinder that develops 228 horsepower and 258-pound feet of torque. It can hustle from zero to 60 mph in 5.5 seconds.

The power from the engine is transferred to all four wheels with Audi’s Quattro system via a seven-speed dual-clutch transmission. Fuel mileage for this little roadster is 23 city/30 highway and 26 combined miles per gallon. 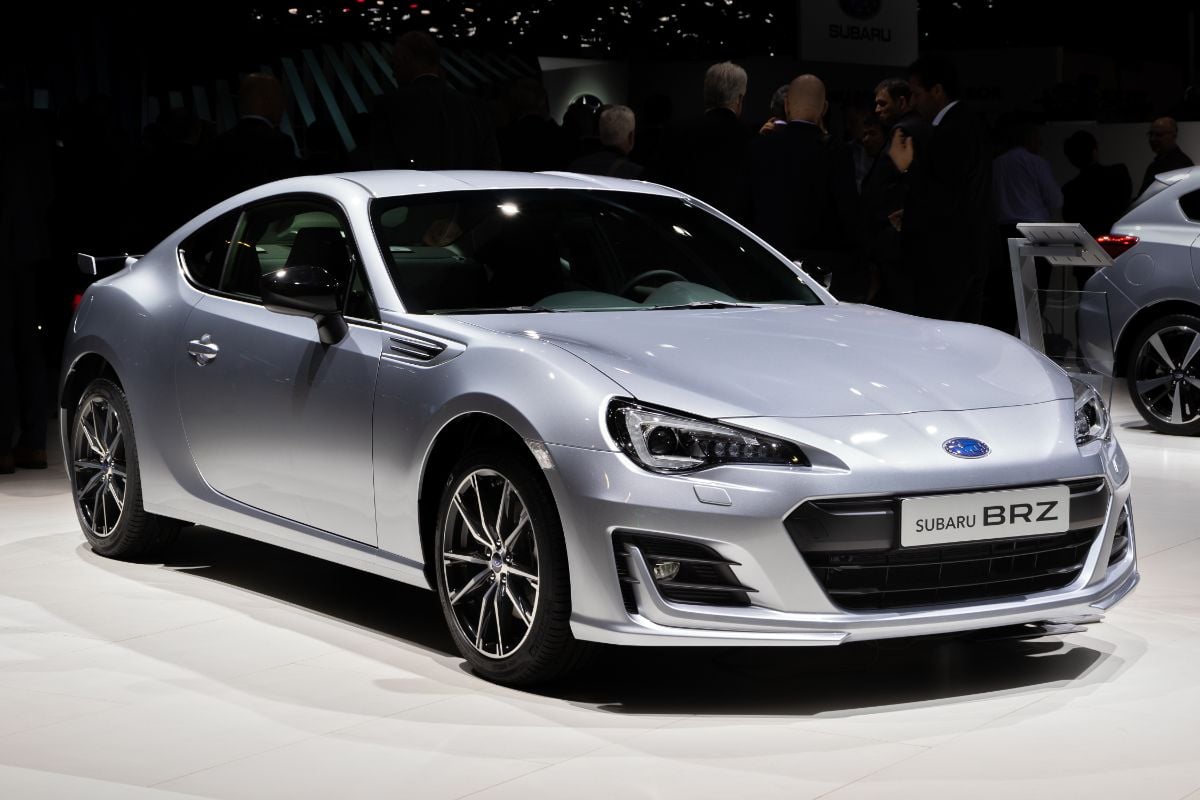 The first collaboration between Toyota and Subaru yielded a pair of two-door roadsters that are fun to drive and affordable to own. The power for both of these cars is a 2.4 L Subaru Boxer engine that produces 228 horsepower and 184-pound feet of torque. Fuel mileage for the Toyota GR 86 is 20 city and 27 highway miles per gallon.

The Subaru BRZ has identical power, and the BRZ premium has a starting MSRP of $27,995. The BRZ Limited sells for a base price of $30,495. The most significant difference between the two cars is their front ends. Instead, Toyota wears the aggressive grille work that Toyota has exhibited for the last few years. 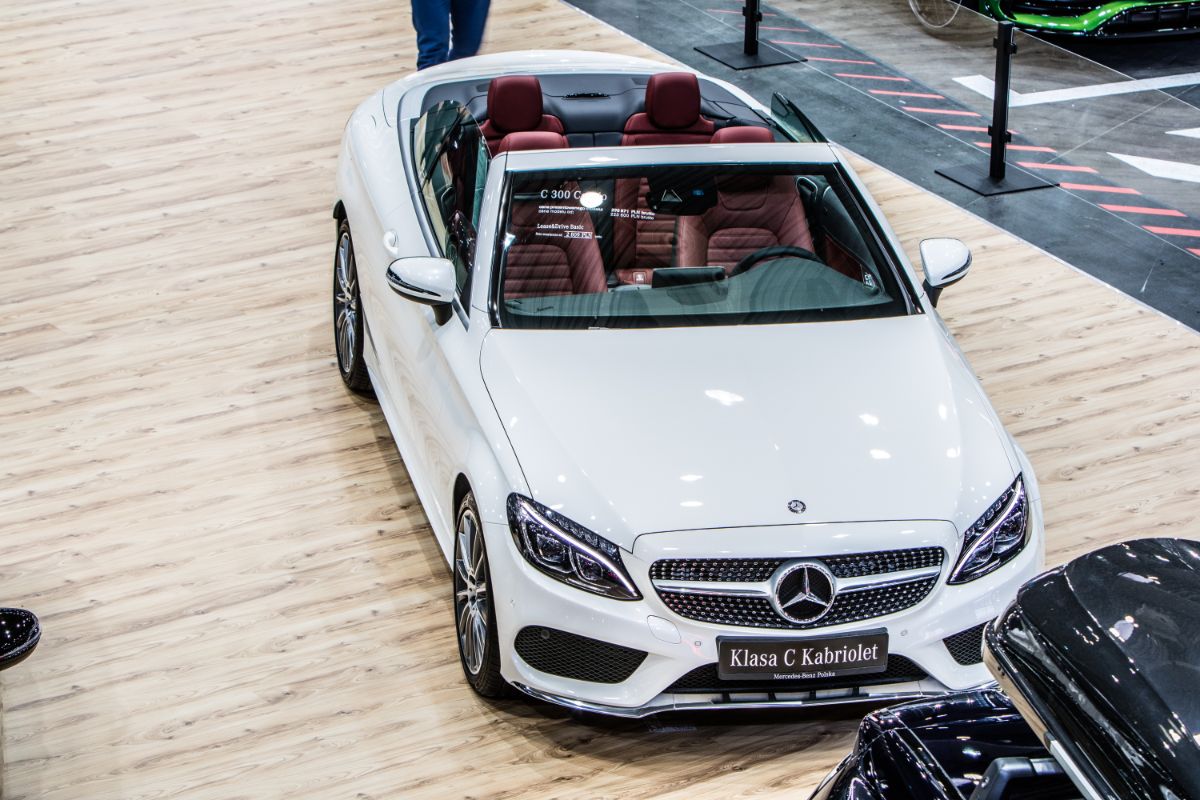 The Mercedes C300 has room for four. The Mazda MX5 is powered by a turbocharged 2.0L 4-cylinder that produces 255 horsepower and 273-pound feet of torque. Fuel mileage for the C300 is 21 city and 28 highway miles per gallon.

Power is applied to the rear wheels via a nine-speed automatic transmission. The C300 can make it from zero to 60 in 6.1 seconds. Admittedly, that is much slower than a few cars on this list. However, the Mercedes 300C is not a light car and tips the scales at almost two tons. 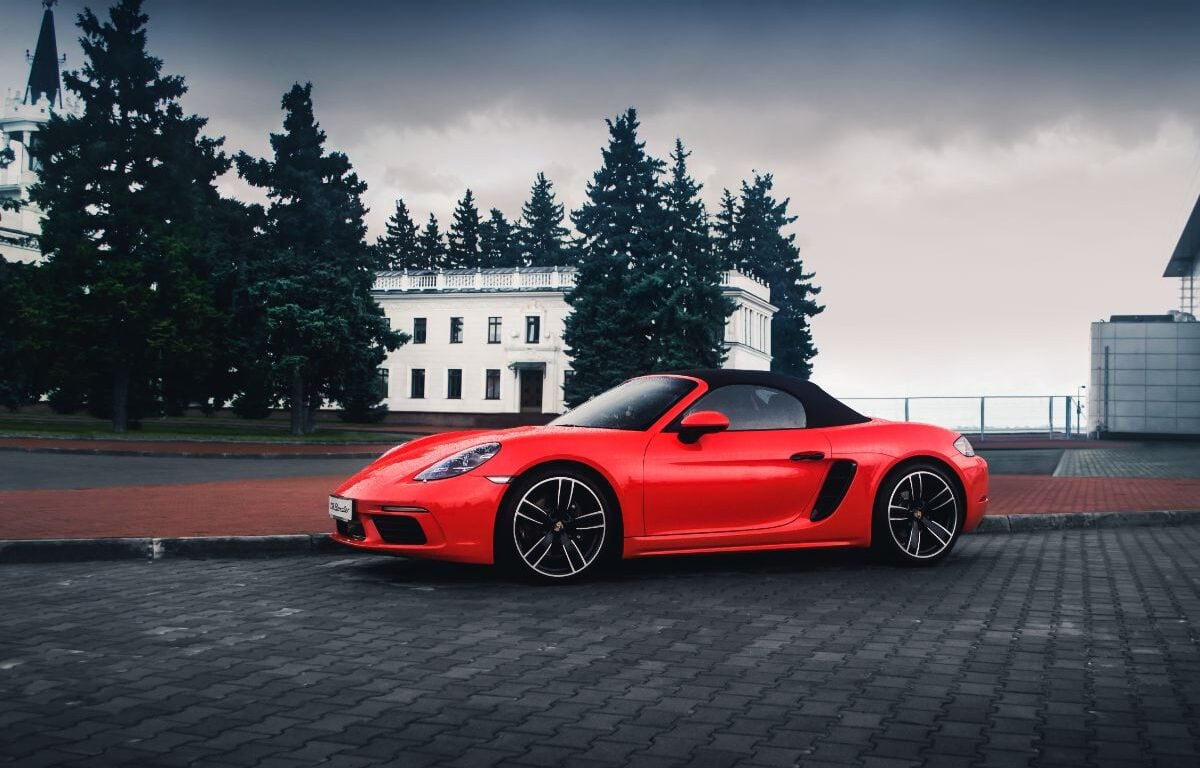 Another convertible that has stood the test of time, the Boxster, has almost the same body style that it had forty years ago. Even the Boxer engine is much like its predecessors. However, the engineers at Porsche have learned how to squeeze more power per liter from these horizontally opposed power plants.

FAQs about cars similar to the Mazda MX5

Is the Mazda MX5 a dependable car?

According to Repair Pal, the Mazda Miata has a higher than average dependability rating.

Is a Miata expensive to maintain?

The Miata has a lower cost to maintain than other similar convertibles.

Does it cost more to insure a convertible than it does other cars?

If you are less than 25 years of age, it may be because the Miata is considered a sports car, and insurance can be high for some drivers.