My son is the go-to person in the family for cars. I’ve never owned an electric car, but his wife once drove one. She stopped to take me home one evening as I was walking back from the grocery store. The little car was quiet, smooth, and quick on the take-off.

What I know of electric cars comes from being tutored by my son and researching to write articles about them. He is how I know what a transmission does, so I’m going to pass it on to you.

Electric vehicles are obviously different from gas-powered vehicles, but sometimes the song remains the same. Here’s how.

Contents Show
First Thing, What Is A Transmission And What Does It Do?
Okay, Now I Know What A Transmission Does. How Is An Electric Car’s Transmission Different From A Gas-Powered One?
If An Electric Car Reverses, Drives, Parks, And Sits In Neutral, Then It Has Gears, And Thus, A Transmission, Right?
Cool. In That Case, I Can Chuck The Transmission Fluid And Oil, Can’t I?
Now That You Understand How The EV’s Lack Of Transmission Works, Let’s Take On Some EV Myths And Bust ‘Em
Myth: Electric Vehicles Are Worse For The Environment Due To Emissions
Myth: EVs Can’t Be Charged Using Clean Energy
Myth: Electric Vehicles Break Down Just As Much As Gas-Powered Cars
Myth: EV Batteries Aren’t Recyclable
Is There Anything Else I Should Know About EV Transmissions? What Are The FAQ?
Since There’s No Transmission In An EV, Does That Mean There’s Extra Storage?
What Is An EVs Top Speed?
What Kind Of Maintenance Will A Professional Perform On My EV?

First Thing, What Is A Transmission And What Does It Do?

When you stomp your foot down on the gas pedal, the power you generate moves the wheels. The transmission kicks in to control the building speed so just the right amount of power goes from the engine to the wheels.

This saves gas as well as saving the engine from being blown out from all that power. The gearbox was designed to keep the revolutions-per-minute or RPMs of the engine at a low point.

This is so (a) gas is saved, and (b) you don’t rev the motor so high it blows out. The transmission and gears work hand-in-hand to send power to the wheels in a controlled and fuel-efficient manner.

The picture above of an electric car looks just like a regular car, doesn’t it? The only thing different about them is that a gas-powered car has to regulate its power using a gearbox. The electric car sends its power directly to the motors located on each axle.

The driver pushes a button on a smart box, and the car reverses, drives forward, sits in neutral, and parks. Not only that, but there’s a bonus: electric vehicles don’t stall out. How cool is that for beginner drivers?

If An Electric Car Reverses, Drives, Parks, And Sits In Neutral, Then It Has Gears, And Thus, A Transmission, Right?

Drivers typically confuse the role of a transmission and a gearbox between the two types of cars. When you turn on an EV, the power is automatically and instantly transferred to the motors on the axles. The wheels turn with this directly applied power. There. Is. No. Transmission.

The one and only gear in an EV keeps the motor’s rotation matching the wheels’ rotation for a smooth ride. The gear has nothing to do with backing up, driving forward, or parking an EV.

Nothing shifts, nothing moves through rotating gears, and nothing disengages. There’s no transmission to make these things necessary.

Cool. In That Case, I Can Chuck The Transmission Fluid And Oil, Can’t I? 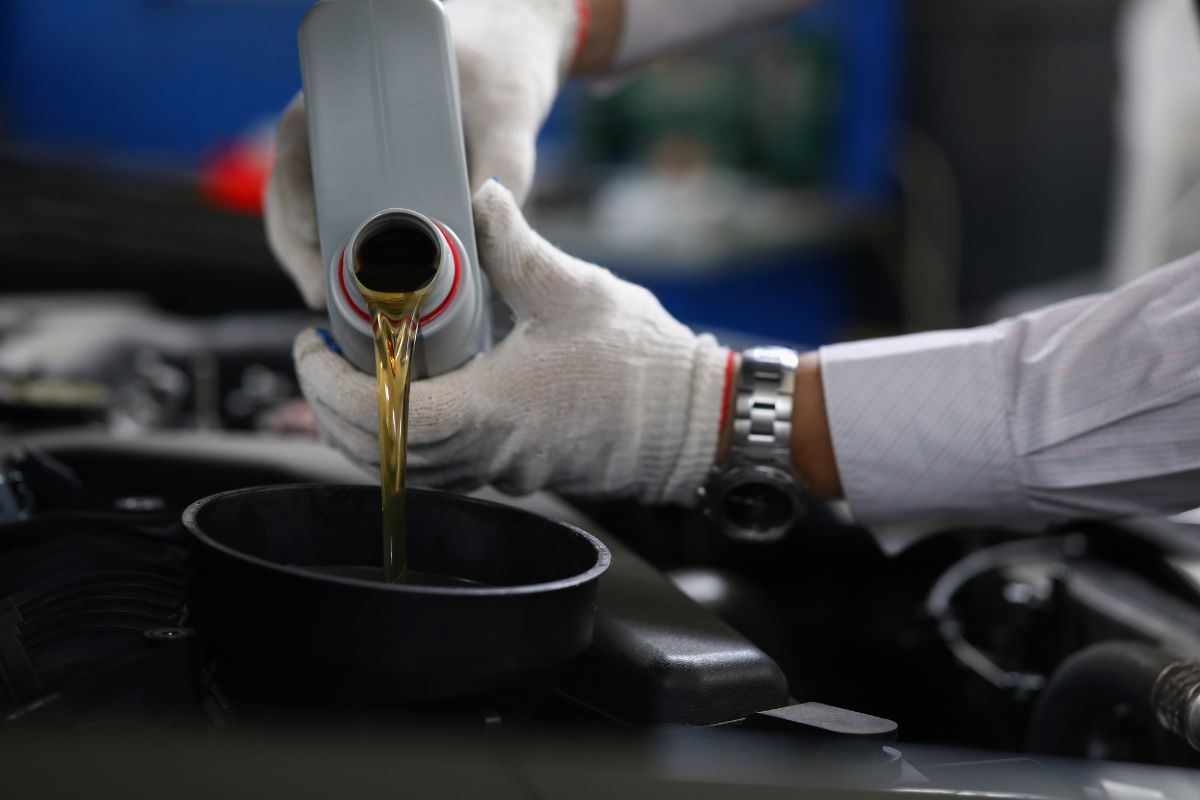 Maybe. Combustion engines contain moving parts that must be lubricated with motor oil or they’ll seize up. Transmissions require fluids to keep the gears moving smoothly. However, electric cars do need some fluids to keep them operating correctly and smoothly:

• Brake fluid. Although the brakes on an electric vehicle are connected differently from those of a gas-powered vehicle, they still need brake fluid. This and other fluid replacement is part of an EV checkup.

• Windshield washing fluid. You have to see, so cleaning the windscreen of an EV is vital to (feel the city breaking and everybody’s shaking and we’re) staying alive. This, too, will be covered in your EV’s checkup.

• Coolant fluid. Electric vehicles with a thermal management system use coolant to keep the motors and battery pack cool. Closely follow the instructions in your owner’s manual if you find yourself in need of replacing the coolant yourself.

Now That You Understand How The EV’s Lack Of Transmission Works, Let’s Take On Some EV Myths And Bust ‘Em

Myth: Electric Vehicles Are Worse For The Environment Due To Emissions

Answer: Electricity emits nothing from tailpipes. Charging stations and home charging might cause more greenhouse gas problems, but the amount is quite small.

Answer: The technology needed to charge electric vehicles via solar or wind power is out there right now.

If you already have solar panels on your roof, check with your local power company to find out if the output is enough for both home use as well as charging your car. If not, they’ll know how to fix it so you can charge your car, too.

Myth: Electric Vehicles Break Down Just As Much As Gas-Powered Cars

Nor do EVs stop dead on the road due to lack of a charge. Motorists who do lack sufficient charge rarely stop; they hit a charging station before going anywhere. Drivers know their range and keep an eye on the battery’s charge.

Answer: They can be recycled. The life of an EV battery is 15 to 20 years. In reality, though, it’s the cells making up the battery pack that wears out.

When they do, the cells still having some life in them are reused as fuel cells. The battery parts that are worn out are recycled into other battery parts.

Is There Anything Else I Should Know About EV Transmissions? What Are The FAQ?

Since There’s No Transmission In An EV, Does That Mean There’s Extra Storage?

What Is An EVs Top Speed?

Here is where the direct power to the motors on the wheels comes into the picture. Electric cars can do 0 to 60 in less than six seconds. They generally have a top speed of 200 to 210. Storage of energy in the battery pack helps achieve these speeds instantly.

What Kind Of Maintenance Will A Professional Perform On My EV?