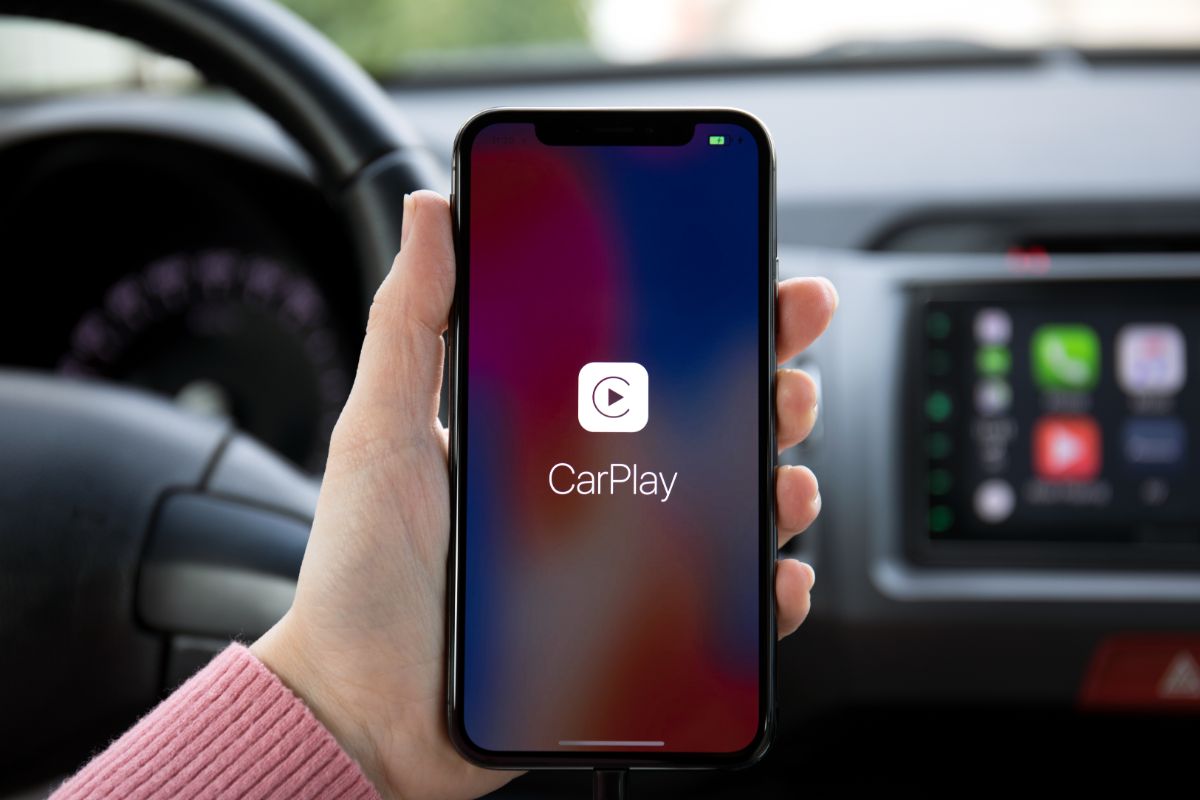 Are you in the market for a new car? Chances are you have already come across the term Apple Car Play. Most reviews about cars ran on and on about which car has it and which one doesn’t. But what exactly is Apple Car Play? Is it an app, and if not, what is it, and what does it do? Does it really matter if it’s in your car or not?

Apple CarPlay was first introduced in 2013 at the Worldwide Developers Conference. At that time, Apple introduced it as “iOS in the Car.” In 2014, the company also announced several early partners, including Hyundai, Kia, Ferrari, and Mercedes.

Apple CarPlay essentially allows you to use your phone hands-free. It’s better than Bluetooth when it comes to integration. Given that the majority of cars nowadays come with touchscreen functionality, it makes sense to be able to see your phone’s apps displayed on your vehicle’s infotainment screen.

Contents Show
What is CarPlay?
How Much Does CarPlay Cost?
Features of Apple CarPlay
Aftermarket Systems
Wireless CarPlay
How To Connect Apple CarPlay
Using CarPlay

Apple CarPlay is not an app. It’s an Apple standard that enables you to use your vehicle’s head unit display as a controller for your iOS devices. This functionality is available on all iPhone models, starting with the iPhone 5 and every other device running iOS 7.1 or later. According to Apple, the majority of vehicle manufacturers are now using CarPlay.

If you really think about it, Apple CarPlay is just a way of bringing iOS to car infotainment systems. After all, all it does is display information from your iPhone to your car’s inbuilt infotainment unit. This gives you a safer way to interact with your phone while driving. For instance, you can send text messages, make calls, access Maps, and listen to music. These are all the things that you may want to do with your phone on the road.

There are two ways to connect your iPhone to your car’s infotainment system. You can either do it via the phone’s lightning port or if your car supports it, you can connect wirelessly. Once connected, CarPlay will give you access to the information stored on your iPhone. This includes controls, contacts, music, calendar events, navigation, and more. Fortunately, because CarPlay basically pulls all this information from your iPhone, there’s no setup involved.

Car manufacturers have been including CarPlay support in their models since 2015. However, there is also a way to get CarPlay into your existing car. If you are interested in doing that, you will want to get an aftermarket head unit.

There are several options that you can choose from, including models from Sony, Pioneer, Kenwood, and Alpine. Other companies like Porsche have even manufactured custom head units for older models, including those from the 1960s. The majority of vehicles manufactured after 2016 come with CarPlay.

How Much Does CarPlay Cost? 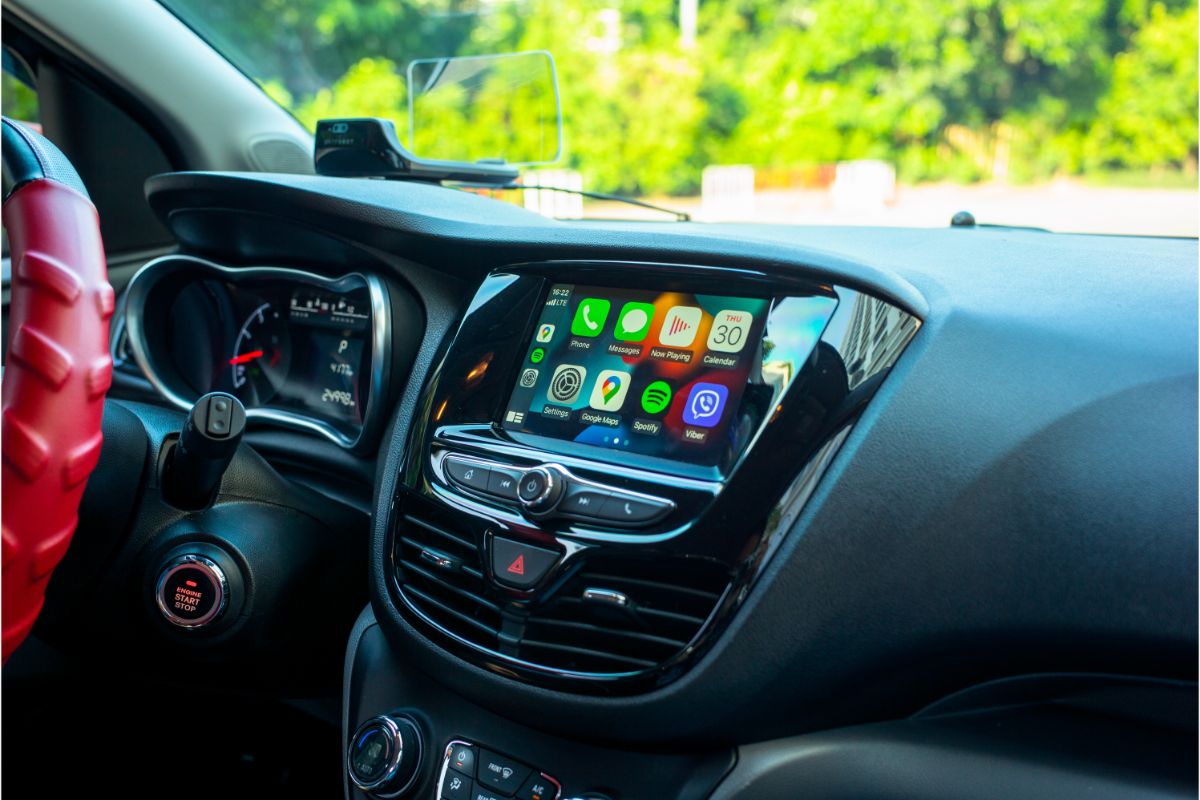 CarPlay is free. It comes as part of your iPhone’s operating system. However, using it might cost you some money. For instance, when you use CarPlay to navigate, message, or listen to books, podcasts, and Music, it will use up data from your phone’s plan.

Depending on the plan you are on, this may end up costing you. Getting CarPlay support in your car can cost you money or not, depending on the model and manufacturer. Apple doesn’t charge car makers any money to integrate the necessary software needed to pair with your phone. However, there are some costs associated with getting the necessary hardware components in the car.

CarPlay is designed so that anyone familiar with iOS can use it right away. If you have used an iPhone, iPad, or iPod touch, you’ll immediately know what to do once your phone is connected.

Connecting your iPhone to CarPlay through its lightning cable pulls up an iOS-like interface on your infotainment display. This will give you a complete home screen with applications like Phones, Maps, and Messages. Podcasts, Music, and other third-party offerings.

You can access all your apps via touchscreen. Additionally, you will also be able to use Siri. Some users also prefer controlling the system using various in-car controls, including those located on the steering wheel and other locations, depending on what car you are dealing with.

If you are using an aftermarket head unit like those from companies like Alpine and Pioneer, the only physical controls you’ll be able to use are our buttons on the in-dash system. You can only use other controls if you install special adapters.

Though you can launch apps through touch-based controls, if you want to perform tasks like sending messages, changing music tracks, or making phone calls, it will be better to use Siri. One thing to note about the CarPlay interface is that it does not come with a keyboard. This means that when sending text messages, the only option is to use voice detection. 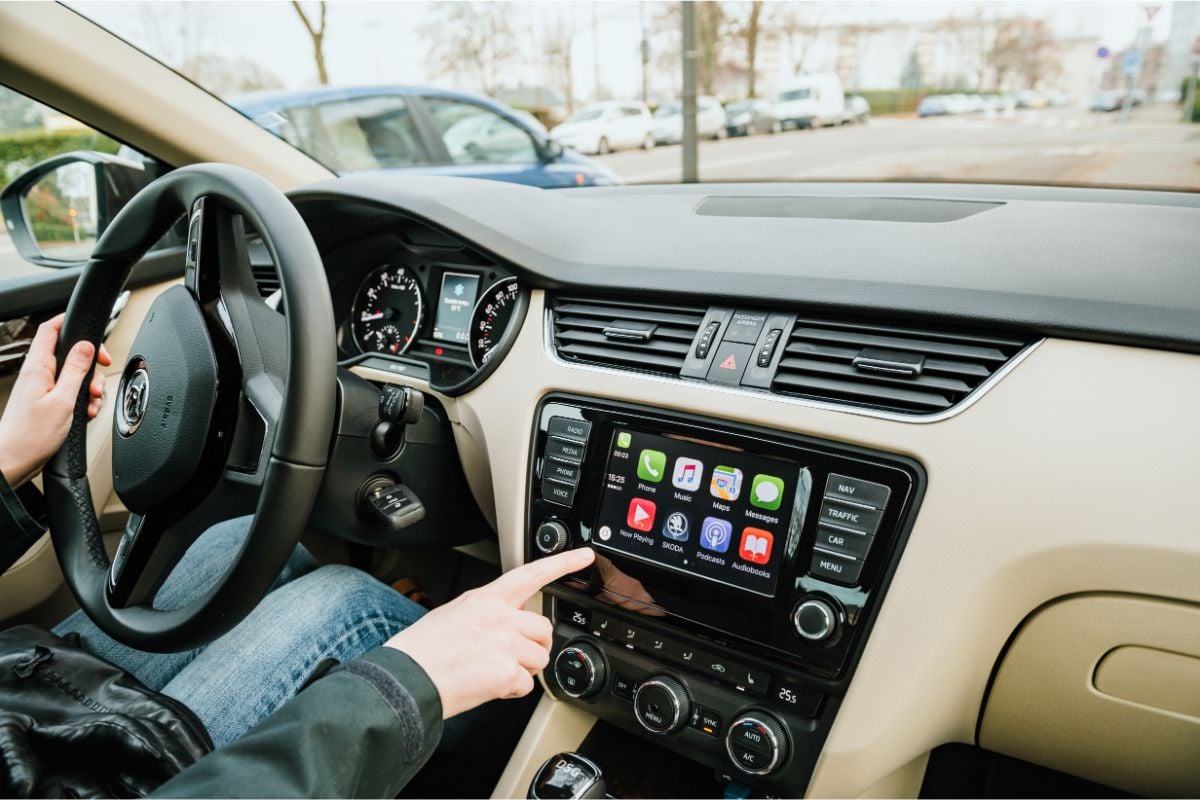 If you have an older model car, the only way to get Apple Carplay on your car would be to get an aftermarket head unit. There are several that you can get online. You can choose from brands like Pioneer, JVC, JBL, Sony, Kenwood, and Alpine.

If you install any of these on your car that doesn’t come with the standard feature, you will be able to use CarPlay instantly. The only other cost you will encounter apart from purchasing the head unit would be to get someone to install it for you. Fortunately, these models can be retrofitted into older cars for relatively minimal costs.

An aftermarket CarPlay system works similarly to those that come installed in cars. However, they may not be able to integrate with the built-in vehicle controls like those on the steering wheel and in other areas.

Wireless implementations of CarPlay have been supported by Apple Since iOS 9. If you are using wireless CarPlay, you won’t need a lightning cable. It allows your iPhone to connect using Bluetooth. This functionality was first seen in BMW cars.

Over time, a lot of other car manufacturers have started adopting the feature. This includes companies like Ford, Honda, Hyundai, Volkswagen, Mercedes, and more. After-market head unit manufacturers like Alpine and Pioneer also offer this functionality. Some use Bluetooth to connect, and with some, you will need to connect using WiFi.

How To Connect Apple CarPlay 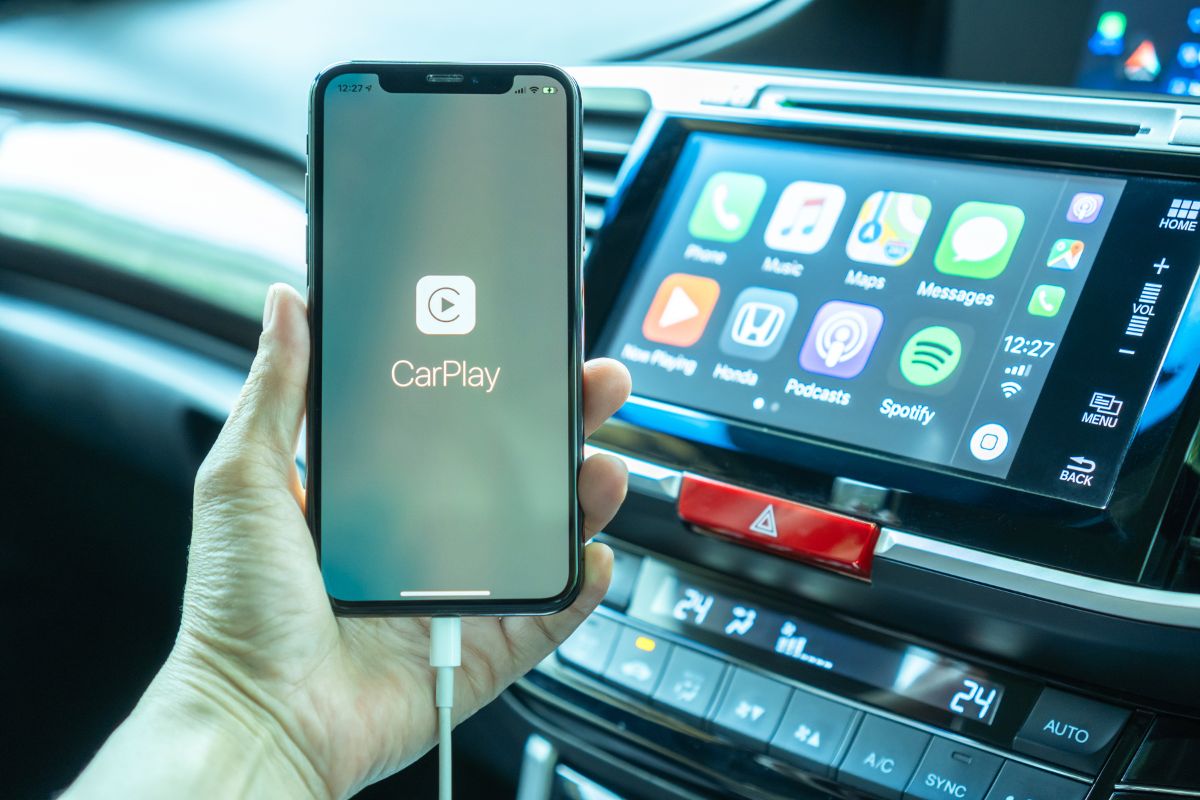 The first thing you will need is an iPhone 5 or newer and a compatible car. You will also need a lightning cable unless your system is wireless. The majority of cars require a USB connection if you want to use CarPlay. This means any car that supports CarPlay should have at least a single USB port. Cars like Audi will allow a CarPlay connection through any of their ports, and some will only use select ports for the connection.

CarPlay software already exists as part of your iPhone’s operating system. This means there is no need to download and install any app. The only other thing you will need to do for your phone to cast its screen to CarPlay is to make sure Siri is on. If Siri is not enabled, the phone will not connect.

Once you connect your iPhone, the car’s infotainment will prompt an agreement to allow the two to sync. It will usually ask if you are okay with sharing bits of anonymous data with Apple. Once you have responded, the car should recognize your device whenever you connect, and it will display the CarPlay home screen.

Please note that this process might be a little different if you are connecting to cars like the BMW 5-series. The car’s system might prompt you through different steps. For instance, it will require a Bluetooth connection, meaning you can connect to CarPlay without a lightning cable.

Interacting with CarPlay is quite straightforward. It will integrate seamlessly with your car’s controls. This includes your steering buttons, the capacitive touchscreen, and voice control. As mentioned before, some of the controls might not work if you are using an aftermarket head unit.

You will also be able to use Siri. In fact, all CarPlay apps need to support Siri, according to Apple. Apple CarPlay has a relatively simple home screen layout that displays all available apps. Please note, however, that since CarPlay uses its own software, it won’t be able to use the features in your car’s infotainment. You can only do that in a car that comes with CarPlay.