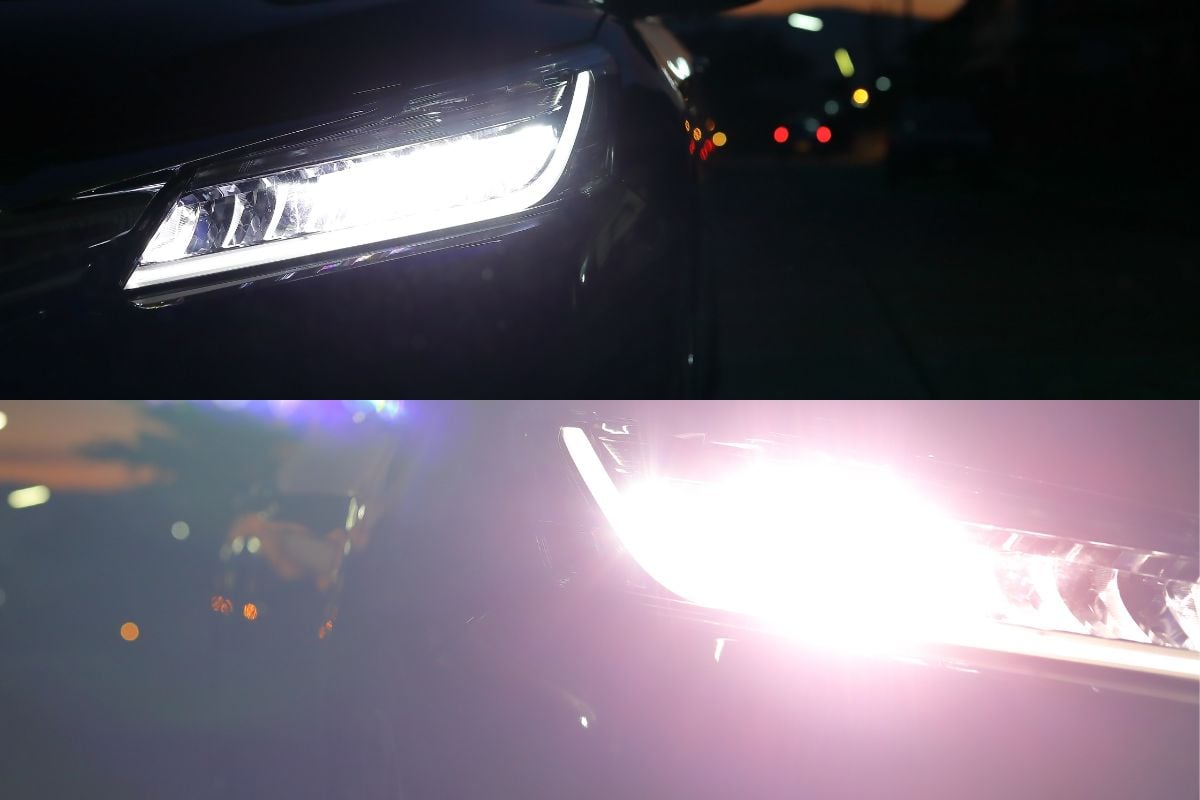 The range of low beams is shorter and the intensity is lower than that of high beams. High-intensity beams can illuminate a larger area and travel further. There’s a time and place for using either one and using the high beam out of turn could affect other drivers and even lead to a ticket and fine.

When to use high beams has been a problem faced by many motorists or remembering to dim them. Others have had modifications done, and highway patrol cops warn that we should be mindful of how we use them.

For instance,  the state of Georgia Code Section 40-8-20 notes that we can get three points added to our license for headlight offenses. Thankfully, some newer vehicles come with automatic high and low beams and take the work away from us as drivers. Let’s brighten up our minds with some knowledge about high beams and low beams as we continue this article.

Whenever shopping for new fog lights or headlights, to upgrade or replace the standard halogens with a brighter option like HIDs and LED headlamps, there will be a host of different bulbs for either beam.

To choose the proper product, it’s vital to know the different beams, what purpose they serve and how to use them. In short, the low beam is the major light source that’s most often used. Meanwhile, the higher beam is the alternative light source barely used in very dark conditions like on dark highways, rural roads, or any poorly lit area.

Related: Different Types of Headlights for Cars | Types of Tail Lights for Vehicles

The distinctions between the two beams are that we use the lower beam for routine nighttime driving, while high beams are utilized in rural regions, on narrow roadways with poor lighting, and regions with none at all.

Low beams point to the roadway and must always remain on when lighting is low. However, high beams point upwards to give more light and must only be used for very brief moments to avoid affecting other drivers’ visibility.

All automobiles have low and high beam features and the majority of drivers should know their differences as it’s a requirement before acquiring one’s driver’s license.

What Are Low Beams? 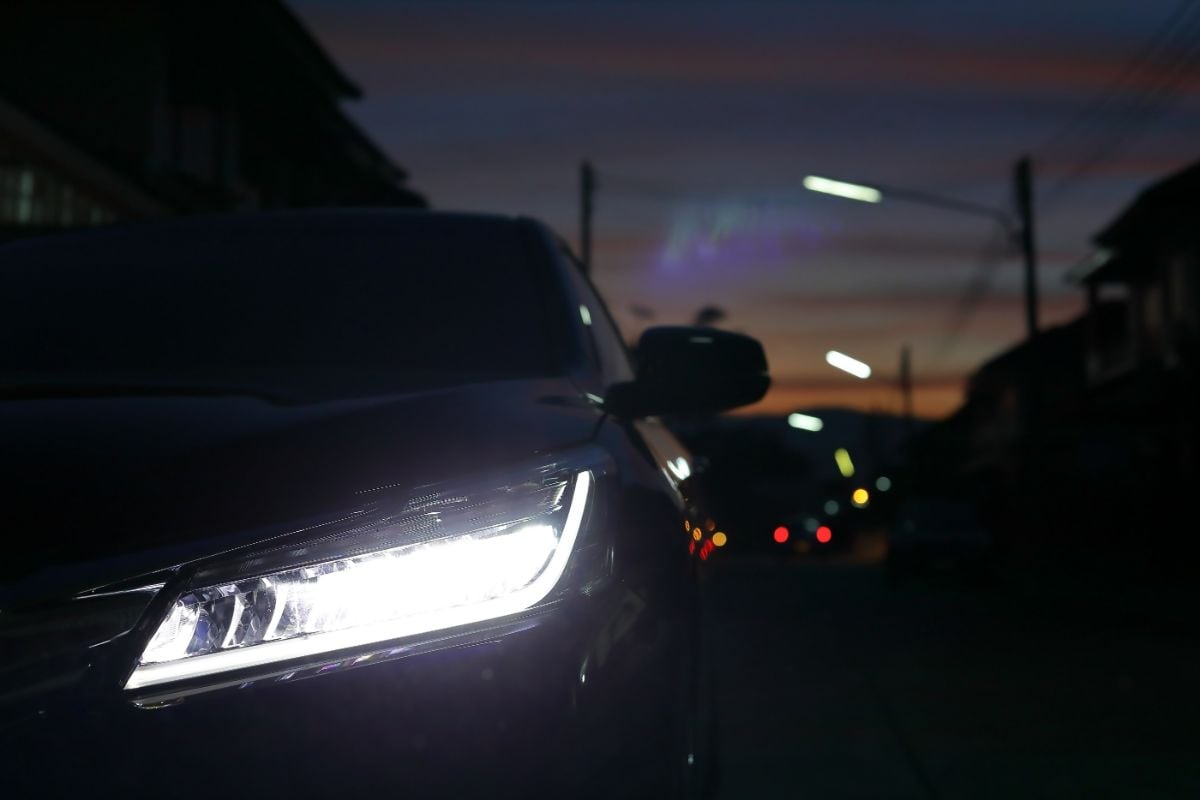 Low beams are the typical lighting your car headlamp emits and are utilized for nighttime driving or in a dim or gloomy situation like an indoor parking lot. The range focus for low beams is short and is frequently called dipped beams.

Low beams are vital and the most commonly used beam in an automobile. The light beam is directed groundward to brighten the roadway and to prevent affecting other motorists. They are also a means for us to get noticed by oncoming drivers and others around us.

Previously, drivers needed to physically turn on their lowlights but modern automobiles do so automatically by sensing low light settings like during the night or while approaching a dim parking lot.

What Are High Beams? 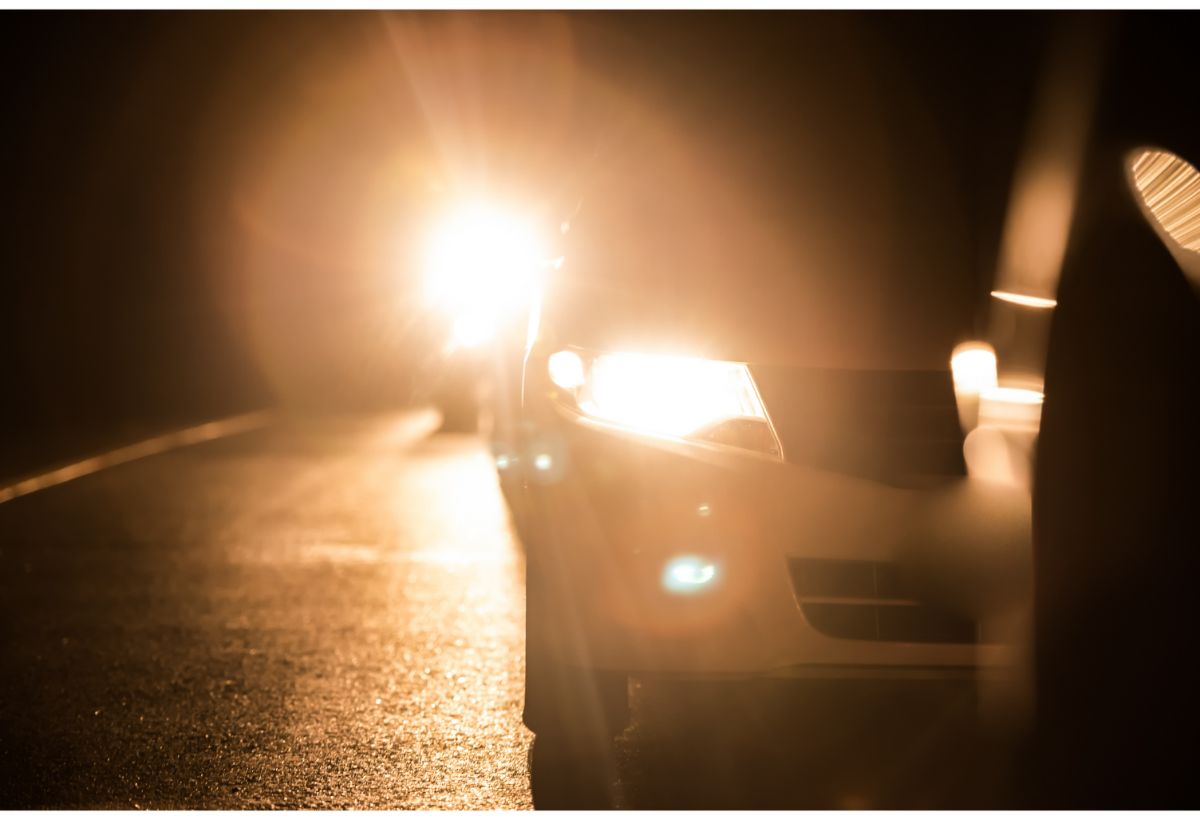 High beam headlights are used when visibility is poor, such as on dark country roads or narrow city streets. The term “brights” is sometimes used to refer to high beams, while “full beams” refers to the most intense setting.

When using high beams, the light source is tilted upward so that more area is covered than when using low beams. The range of effects of high beams is extensive.

High beams, in contrast to low beams, will never activate on their own. The driver is responsible for manually turning them on as needed. High beams shouldn’t be used for more than a few seconds at a time, even when extra illumination is crucial.

Using your high beams while driving is risky since it distorts other drivers’ vision. Wearing them for an excessively long time is against the law.

There is a low beam and a high beam on every automobile and truck. However, some use two bulbs (single beam mechanisms) while others use just one (dual beam setup) for both.

Dual-beam systems allow drivers to change or update both the higher and lower beams with a single set of bulbs. The price of and power consumption for dual-beam bulbs are marginally higher than that of single-beam bulbs.

Igniting the Debate: When Should You Use High and Low Beams?

You should always use your high beam headlights when driving at night or when visibility is too poor to allow safe forward motion. Nighttime driving with poor vision may be nerve-wracking for even the most seasoned drivers. For what reasons is nighttime driving riskier?

During the nighttime, a driver’s ability to react is significantly impaired because of the diminished sharpness of his or her visual acuity. High-beam headlights cast a skewed beam of light that can see up to 400 feet ahead of the car, or approximately twice as far as low beams. (Keep in mind that 68 miles per hour are equivalent to around 100 ft/sec. Using low beams at freeway speeds at nighttime can leave you with only a few seconds to avoid an accident.

While high beams are there to protect you, improper use could put other drivers at risk. If your high beams could blind oncoming traffic, you are required by law in every state to turn them down to low beams. While the specific distance varies by state, high beam headlights are normally prohibited within 500 feet of an oncoming vehicle and 200 or 300 feet of a vehicle being followed.

In What Situations are High Beam Headlights Necessary For Safety? 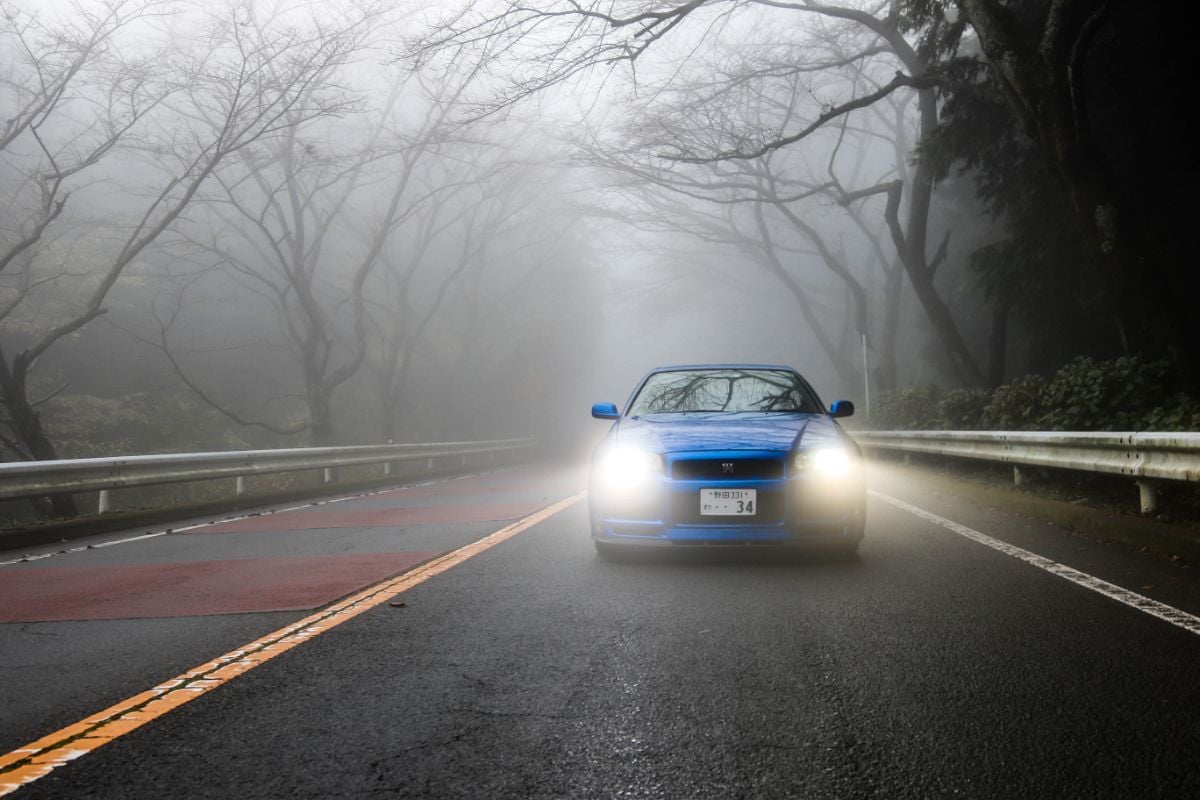 When Visibility is Poor in City Settings

Your travels may take you along an unfamiliar road, through a work zone, or in the middle of the night on a city street. Not being able to see what’s ahead is a very unsettling feeling. Whenever your eyesight is poor, you should take it easy.

Turn on the full beam if you can see no other cars. Those on foot or bicycles who happen to be on the roadside or stepping in front of you will be spared your headlights’ destructive glare if you turn on your high beams.

Near oncoming traffic, within 300 to 1000 feet of you, state law compels you to turn off high beams in metropolitan areas. Also, during stoplights and red lights, you should turn them down to around 200-300 feet from the vehicles you’re following.

Find out the precise minimum distance by contacting your state department of motor vehicles. If you’re driving on an interstate or approaching a toll booth or rest area from behind another car, make sure to turn down your high beams so as not to blind the other driver.

Unlit Streets And Back Lanes

Street lighting in rural areas and on open roadways is sometimes inadequate, making nighttime travel more hazardous. Turning on your high beam headlights helps increase your range of vision. Avoiding collisions with animals and bicycles, and we make late-night pedestrians easier with high lights when driving in rural areas.

Be ready to immediately dim your high lights for oncoming cars or when you follow another vehicle from behind, even though rural roads may seem to be desolate. Secure yourself and other motorists by turning down your headlights.

When Low-Beam Headlights Are Appropriate? 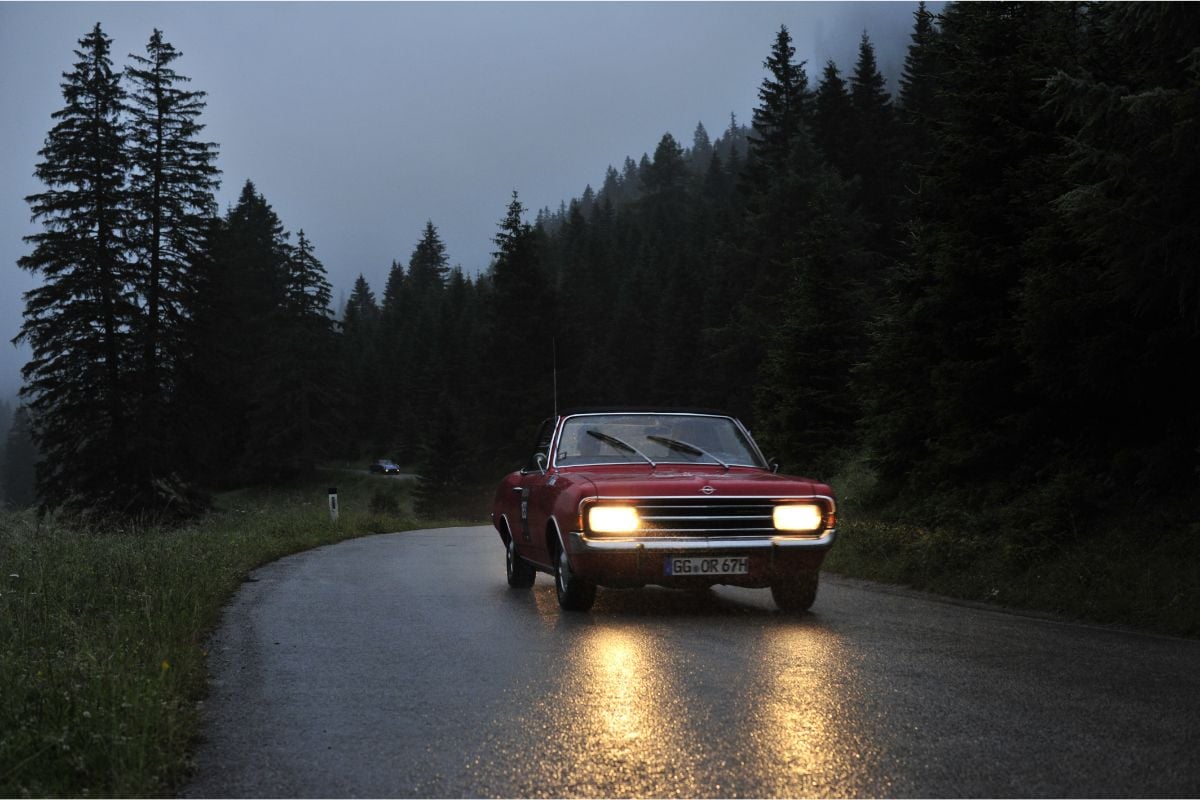 High-beam headlights should never be used in adverse weather conditions such as heavy rain, snow, or fog. They can worsen your vision in these situations. Directing your high beams at the fog or rainfall will cause it to reflect on you. Snowflakes or ice particles reflect you during a snowfall. The effect is a blinding wall of glare that makes it impossible to see the roadway.

Choosing the Right Headlights for High and Low Beam Needs

In the world of headlights, this is a brand new point of contention. LED and HID headlights are rapidly replacing reflecting halogen bulbs in popularity. Many motorists may do this themselves with the help of at-home conversion kits, and some automakers even include them as standard equipment.

The two kinds of illumination are comparable in terms of intensity and scope, but they differ in significant ways. Your circumstances, such as where you reside, when you commute, and how often you drive at night, are all relevant considerations in this discussion. To assist you in making a decision, we have created the following list following the advice of industry professionals. 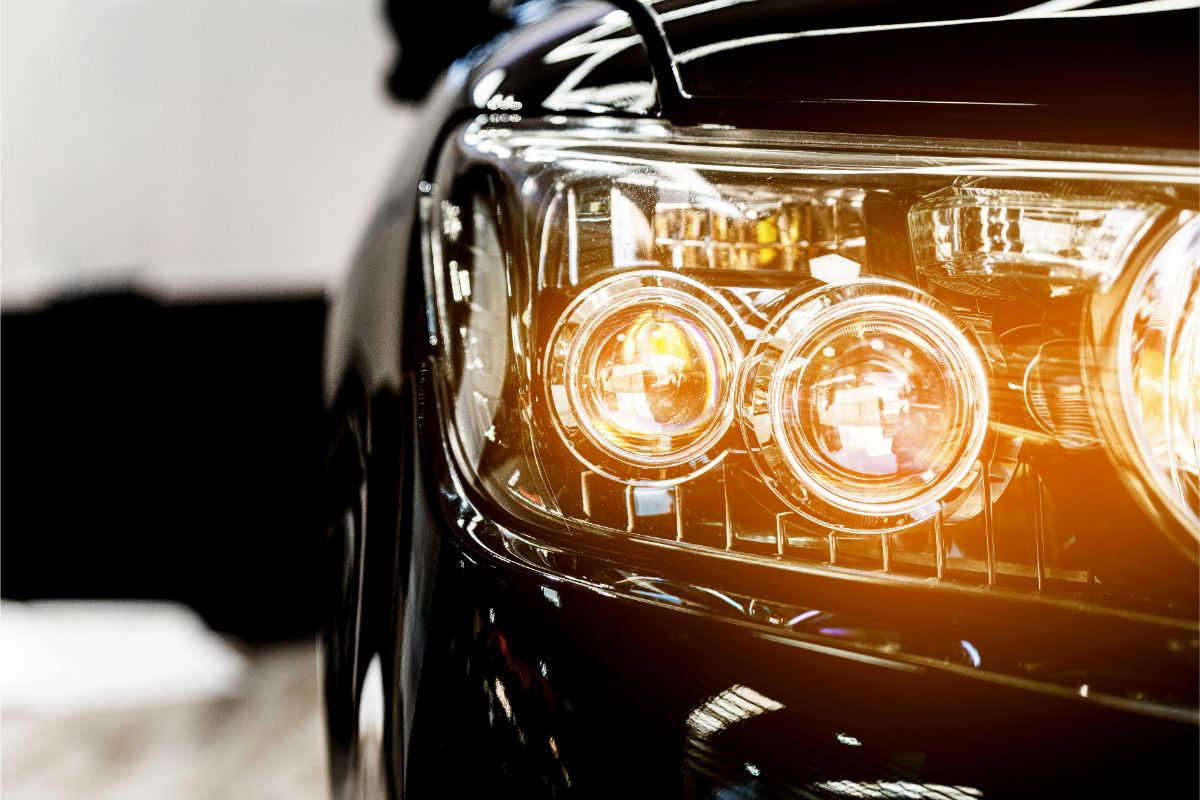 Vehicles’ nighttime visibility is greatly improved with the installation of high-intensity discharge (HID) and light-emitting diode (LED) headlights. Halogen headlights, which use argon and nitrogen gases to heat a bulb and emit light, were previously standard in most autos.

HID headlights, short for high-intensity discharge headlights, employ a gas as well as a metal filament to generate a brilliant blue-white light when heated. Filament-free HID lights can be distinguished by their ability to charge xenon at high voltage using electrodes in place of conventional light bulbs.

High-intensity discharge (HID) headlights are high-end headlights utilized for their durability and brilliance. There are no better nighttime driving headlights than this one.

The term “LED headlights” refers to light-emitting diode lighting. They send the photons that makeup light through semi-conductors, which release energy in the form of visible light. Some vehicles need supplemental heat sinks or fans to deal with the high temperatures generated by these lamps.

Here are some similarities and distinctions between them:

What About Low Beam? How do LEDs and HIDs Compare?

Comparing the amount of light produced by HID versus LED headlights is crucial. Since HID headlights cover a wider area than LED headlights, it’s necessary to have them tested by a specialist to ensure they aren’t reflecting glare onto approaching vehicles.

The Xenon HID Replacement Bulb is a great choice for nighttime drivers. These HID headlamps are three times as brilliant as standard halogen lamps at 3200 lumens, and they have a perfect focal length that eliminates glare.

Which Is Better: LED or HID Headlights? 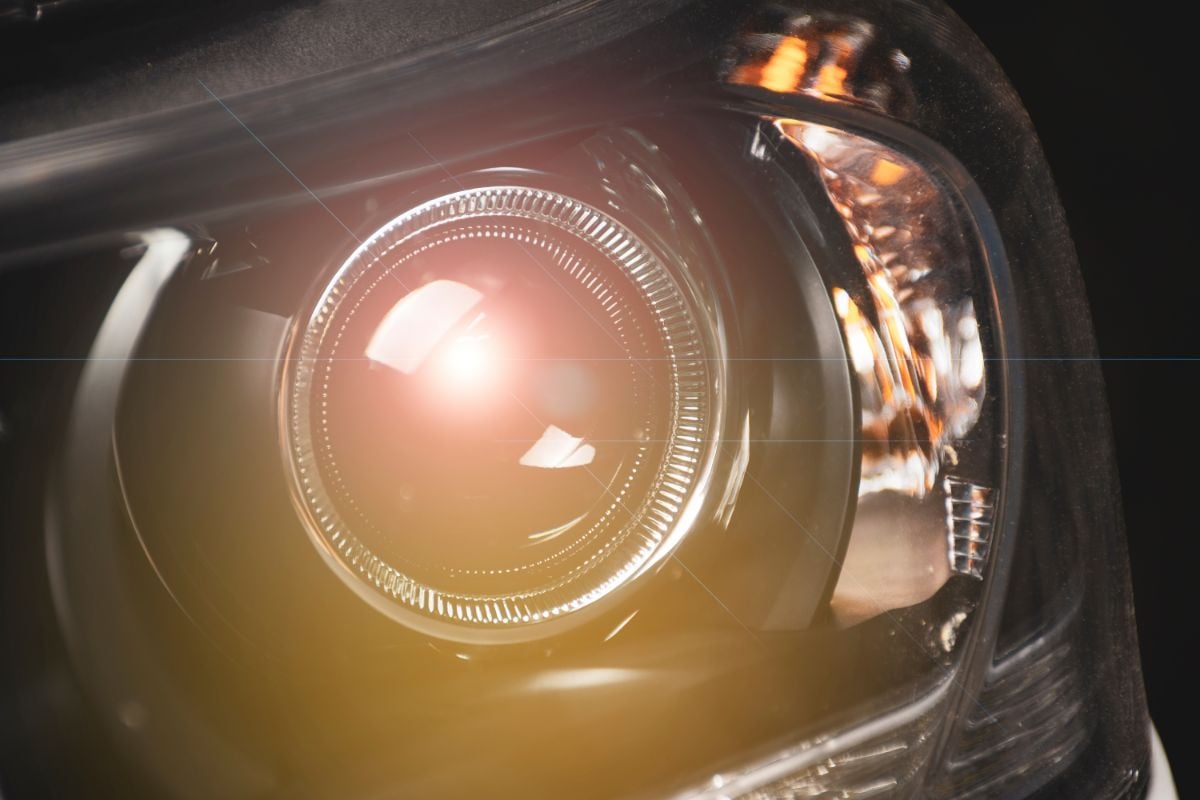 Find out what your expectations are before purchasing new lights. You can save money by switching to halogen or HID daytime running lights if you do most of your driving then. If you need a quick fix, HID is another viable option.

LEDs are the best option for nighttime drivers due to their high lumen output, fast startup times, and long lifespans. Think about where you currently are. Using LED lights is a good idea if you reside in a remote location with few streetlights. In a metropolis, HID might be the way to go.

Affordable HID Warehouse Bulbs come in a variety of hues, including Midnight Purple. A wide range of color temperatures is available for bulbs of this sort.

The HID headlight bulbs made by Sylvania are widely available and simple to swap out. These bulbs are used by some automakers. The 35-watt and 85-volt ratings are the same as that of the Philips Xenon Standard bulbs.

A high-intensity release of 85 volts and 35 watts is the norm for Philips Xenon Standard light bulbs. The certificate of authentication guarantees their genuineness and quality.

Light bulbs from Aukee light bulbs are water-resistant and equipped with a powerful cooling fan. Fog lights are one of their most common applications, according to experts.

The Honcs headlight bulbs are simple to set up and use an aluminum heat sink to dissipate heat rather than a fan.

These 60-watt Fahren headlight bulbs produce an intense, white light at a color temperature of 6500 kelvin, and their light can travel a long distance.