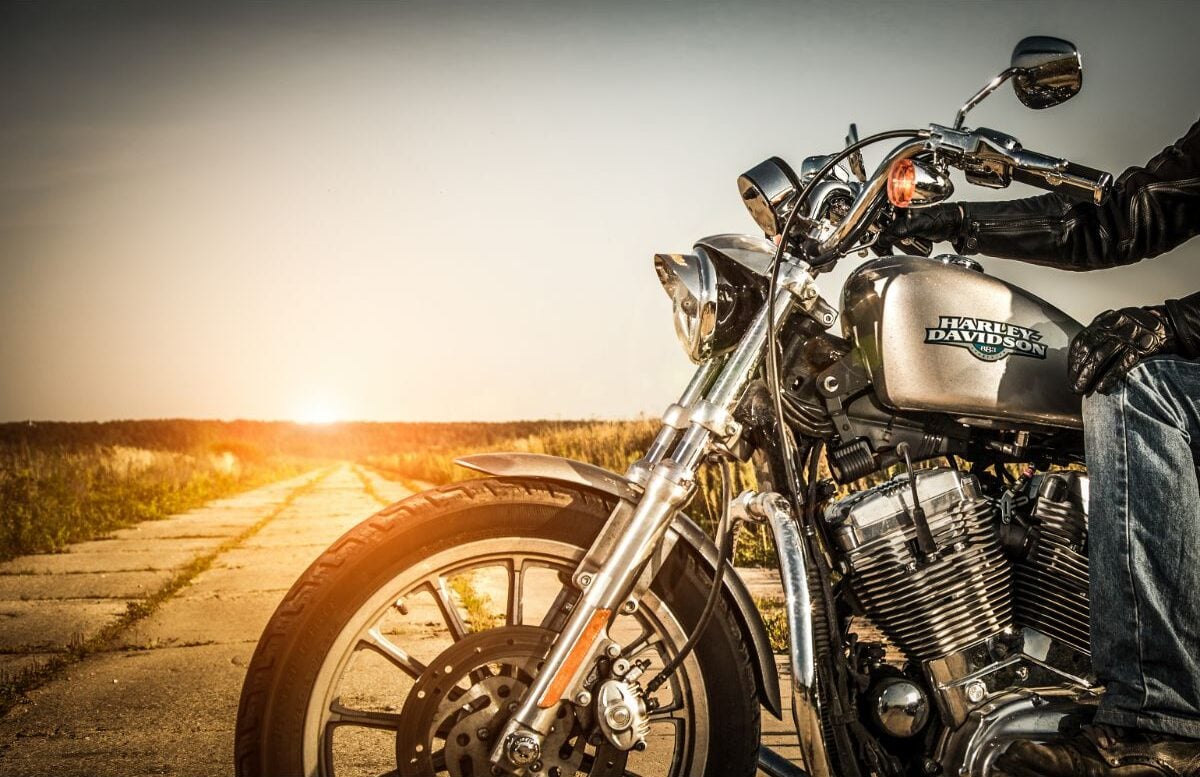 For over a century, Harley-Davidson has been equipping America with some sweet, two-wheeled rides. Headquartered in Milwaukee, Wisconsin, this motorcycle giant was only one of two motorcycle brands to make it through the devastating time of The Great Depression. Today, these motorcycles are a worldwide top-seller.

To help get these units to fans all around the globe, Harley-Davidson has two facilities in the US, and others in Brazil, India, and Thailand. There are a handful of Harley types sold at dealerships. The most popular model is the Street Glide.

Where this model shines the most is in the tank range, which is about 250 miles and the estimated 45 miles you get per gallon. This bike has 92 horsepower, which helps it reach 60 mph in about 5 seconds, going as fast as 105 mph. If that’s the kind of speed you’d like to unleash, prices start at $22,000.

There’s a litany of accessories and extras you can add on for additional costs. If getting a genuine Harley-Davidson would prove more of a predicament than it’s worth, I can help with that! I’m going to take you through the ins and outs of 12 motorcycles that are similar to the Harley-Davidson. With that being said, the top three from the list are the Ducati Diavel 1260, Honda Gold Wing, and Royal Enfield Meteor 350.

The reasons why, which you’ll find more details about later, start with the specs. Ducati made a bike that is hyper-fast. It excels in every category, sometimes going above and beyond Harley-Davidson. After all of that, it still undercuts the Street Glide in price. With a motorcycle that exceptional, it definitely is a top selection as an alternative.

The next pick is the Honda Gold Wing. Since the inception of this bike, it has undergone some major upgrades, including space to bring things or a person. It’s secure and smooth to ride. The Gold Wing has slightly better mpg than the Harley and it would be a fantastic choice to take on long stretches, always a win in my book.

Lastly, the Royal Enfield Meteor. I added this one because I thought it was helpful for a beginner. It’s possible that the only reason you’re thinking about Harley-Davidson in the first place is because it’s synonymous with motorcycles.

If you’ve been dying to get on one, you don’t have to start with the big leagues. The Meteor is the best option to get familiar with how a motorcycle handles and do so with a quality piece. Not to mention, it’s under $5,000.

Alright, drop that kickstand, we’ve got some alternatives to look through! 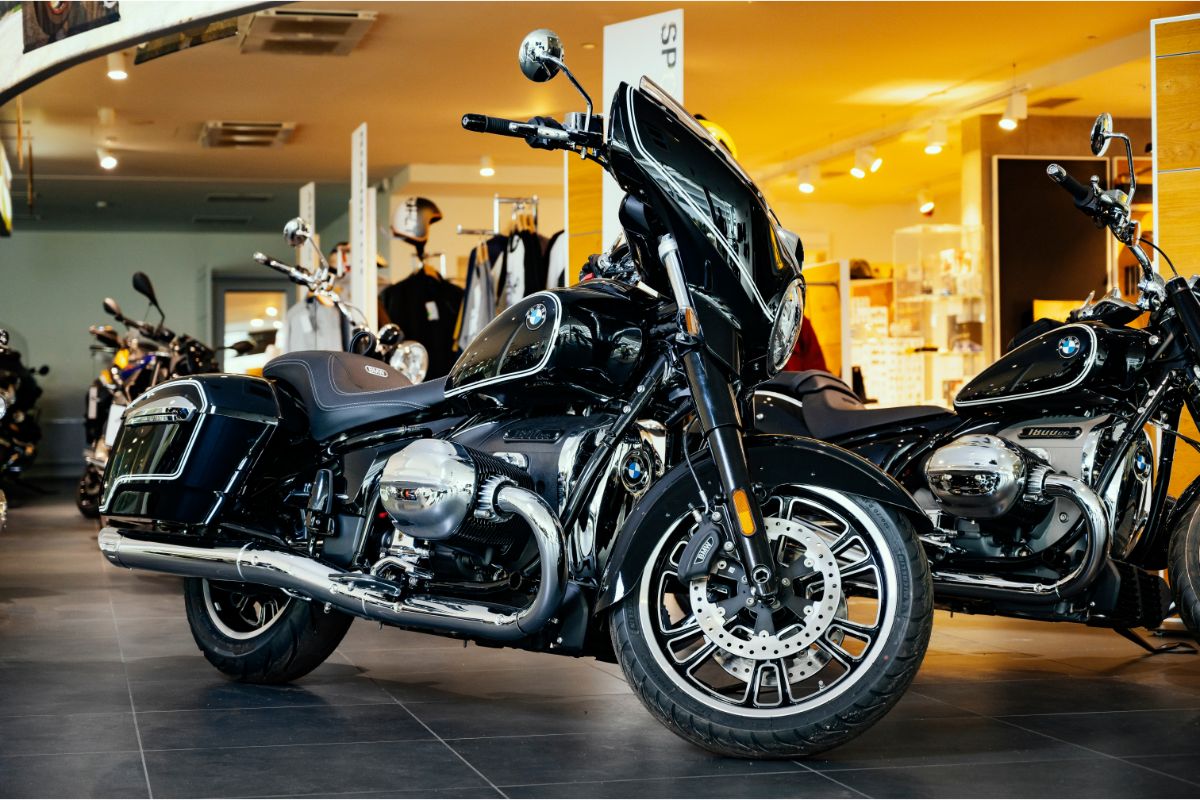 BMW is always an interesting brand to review. Unless you’re deep in the lifestyle, motorcycles are not what pops into your mind when you hear about BMW. Known for being a high-end sedan manufacturer, BMW has been gunning for Harley-Davidson sales for quite some time.

The R 18 has a galaxy exterior, which is in stark contrast with the bright blue and white logo. Unlike the Street Glide, the R 18 can disappear into the night. Similar to the Glide, this BMW has 91 hp. Give it 5 seconds and a rider will hit 60 mph. The tires on this BMW are a bit thicker than the Glide. 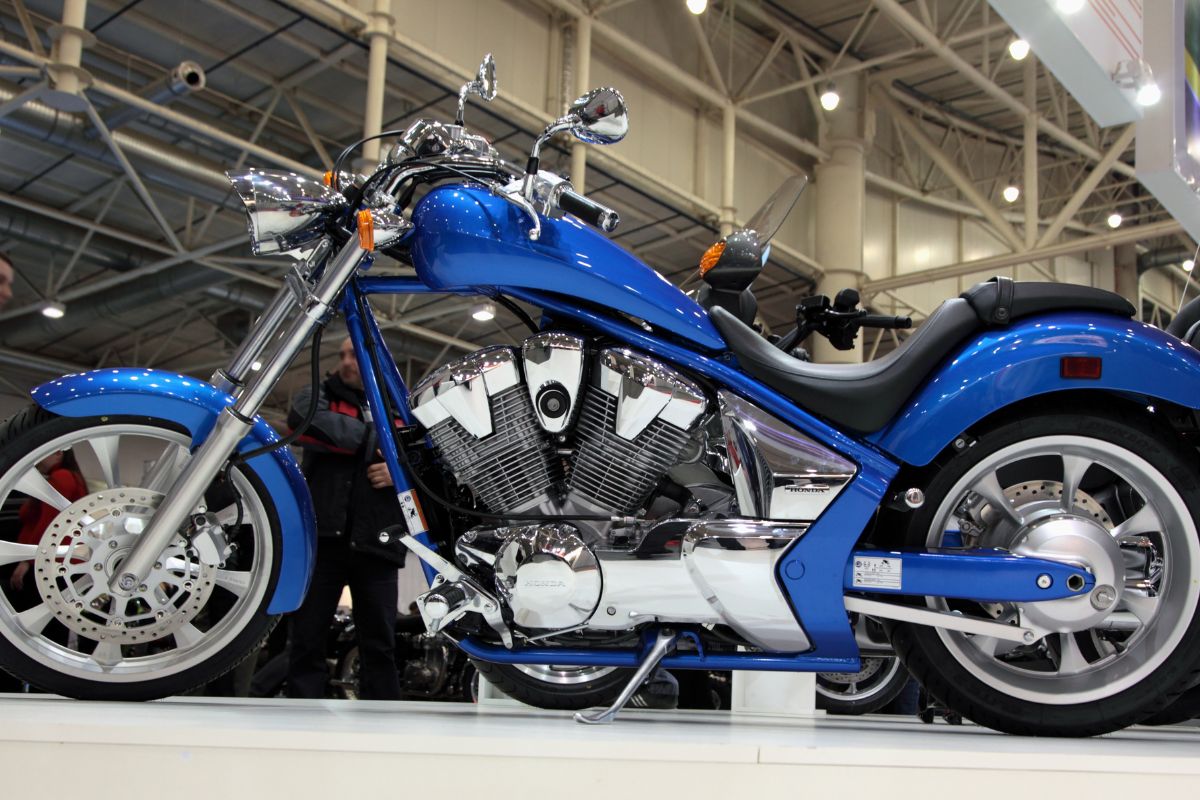 This one is lighter on the build to offer direct sight into what makes the machine run, a closer chopper feel. That’s nice to hear, but it hasn’t been in production lately. Luckily, it’s back and going 110 mph. On a 122-mile tank, you can expect to get 28 mpg. That’s well under the Street Glide but it isn’t terrible.

Another less-than feature is that this Honda has only 54 hp. On a budget-friendly note, if this ride has you going, it’s almost half the price of a Harley, coming in at $11,500. 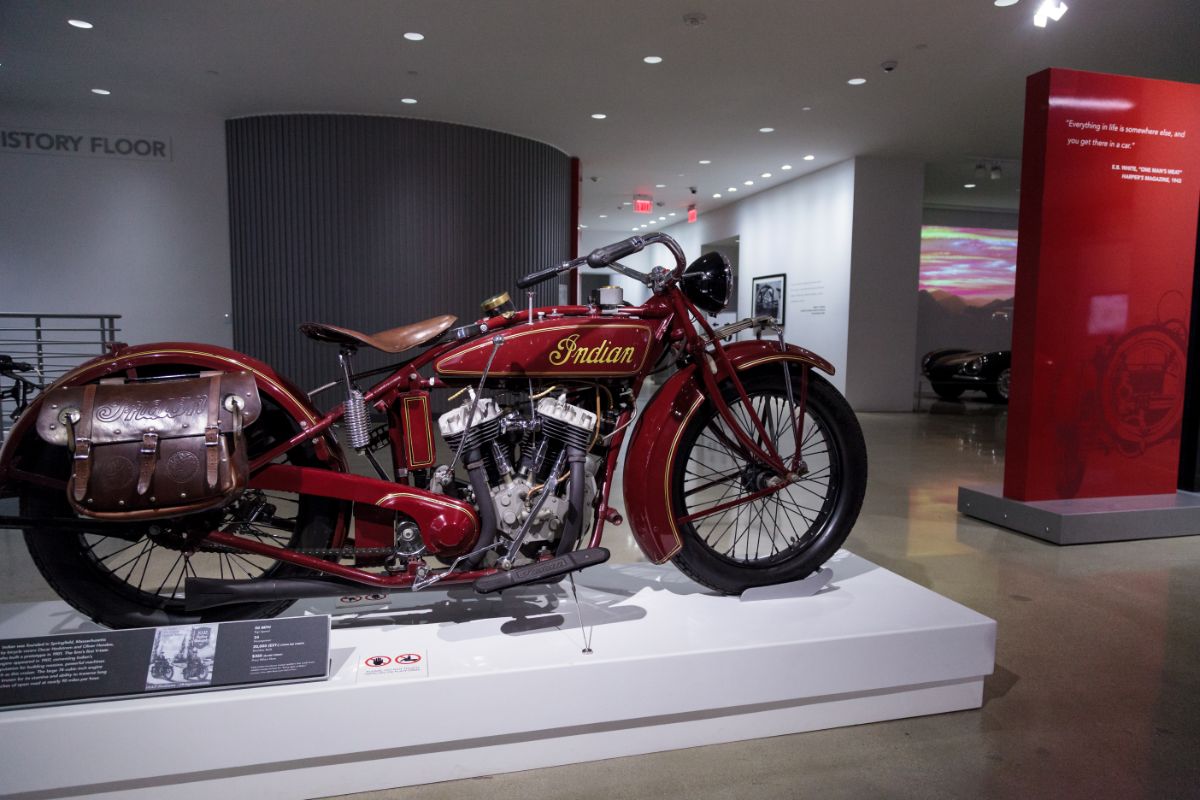 A sleek ride here to both take business from Harley Davidson as well as keep travelers looking smooth is this rad-looking ride. A Chief today is lighter than you’re used to, if you’ve taken the reign of one before. That has to do with the new steel tube frame, which makes the handling a little different. It might just be the best ride by an Indian Chief yet.

Increasing the specs on this one, we’re back up to 74 hp. That’s less than the Street Glide but more than the Fury. Similar to the BMW, it’s 33 miles to the gallon in an Indian Chief. You’ll also hit top speeds of 115 mph. Get your hands on one for $15,000. 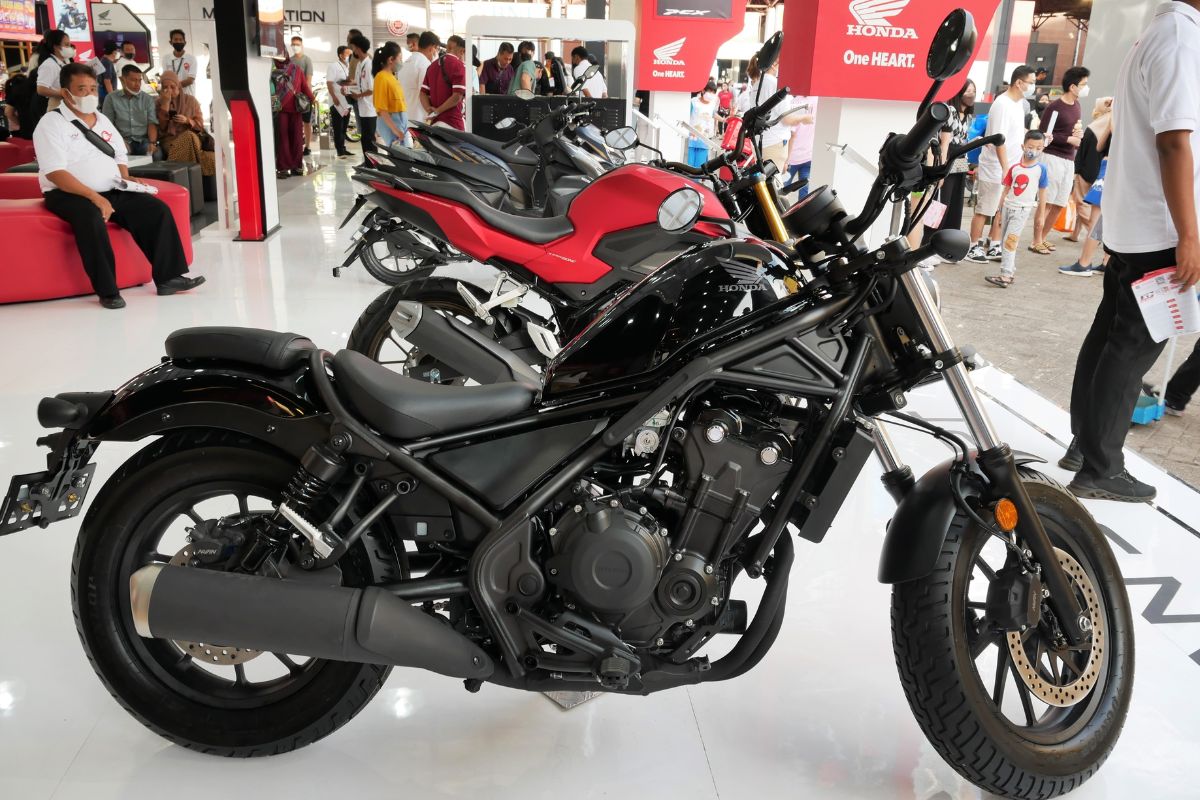 The original Rebel was the 250 and stayed in production for 30 years, starting in 1985. The end of one was the first chapter of another and it was at that point that the 300 and 500 hit the streets. Owners of the bike say the position is more comfortable than other models because of how low the seat sits. While there are talks of a new version in the near future, the 500 unit is top-notch.

In 5.2 seconds, this bike can get up to 60 mph. The top speed of 95 is less than others on the list, so you would not want to race it. To be fair, try to avoid racing motorcycles anyway. Lower speeds may have an impact on your buying decision, but perhaps so would 67 mpg, which is more than the Harley.

Not super powerful either, though, with 46 hp. A price of $6,400 might make it worth the lower specs. 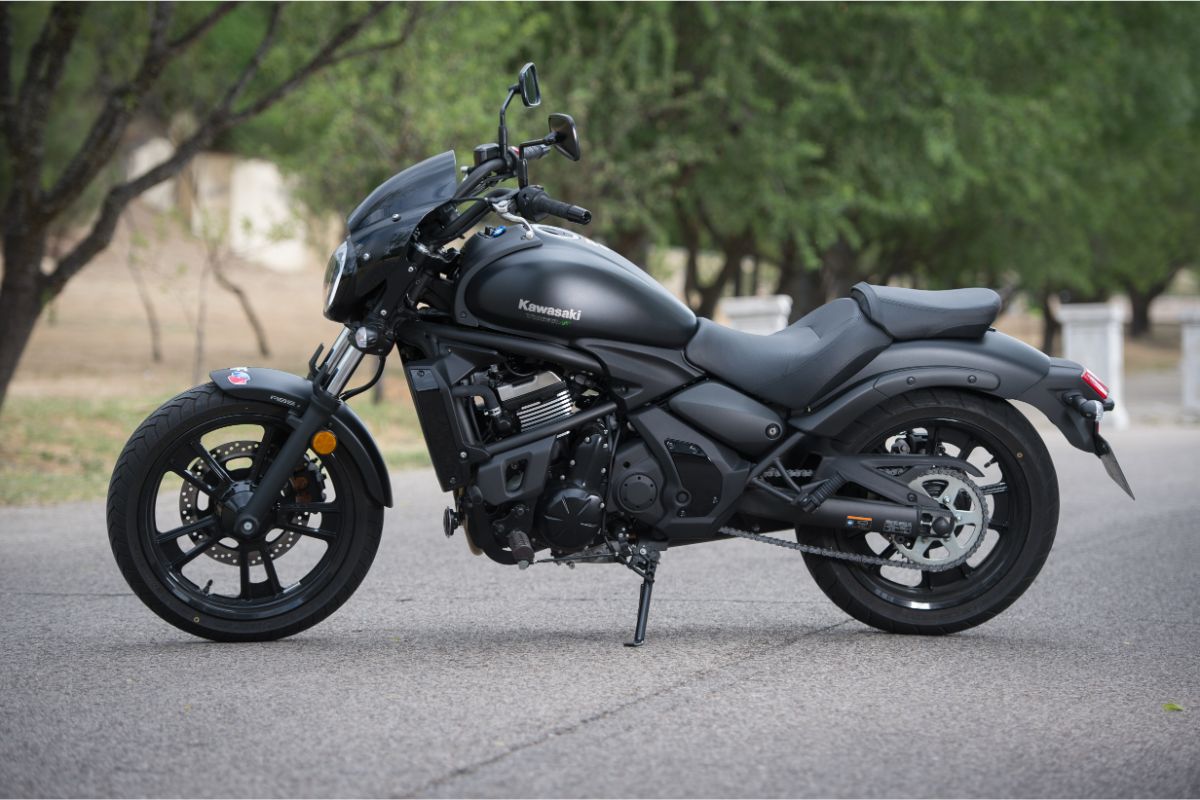 1985 was clearly a productive year for motorcycles as Kawasaki came out with theirs at the same time as Honda. The option of bright colors on the rim and sides feels like a nostalgic reminder of that decade and acts as a good way to stand apart from the crowd.

This motorcycle has 54 hp and gets up to 60 mph in 5.5 seconds. It’s also the fastest one we’ve covered so far, clocking top speeds at 117 mph. The fuel economy averages out at 39 mpg. Speed and cost are really the defining features of this bike. If the two-toned paint is speaking to your soul, plan to spend about $8,500 to make it yours. 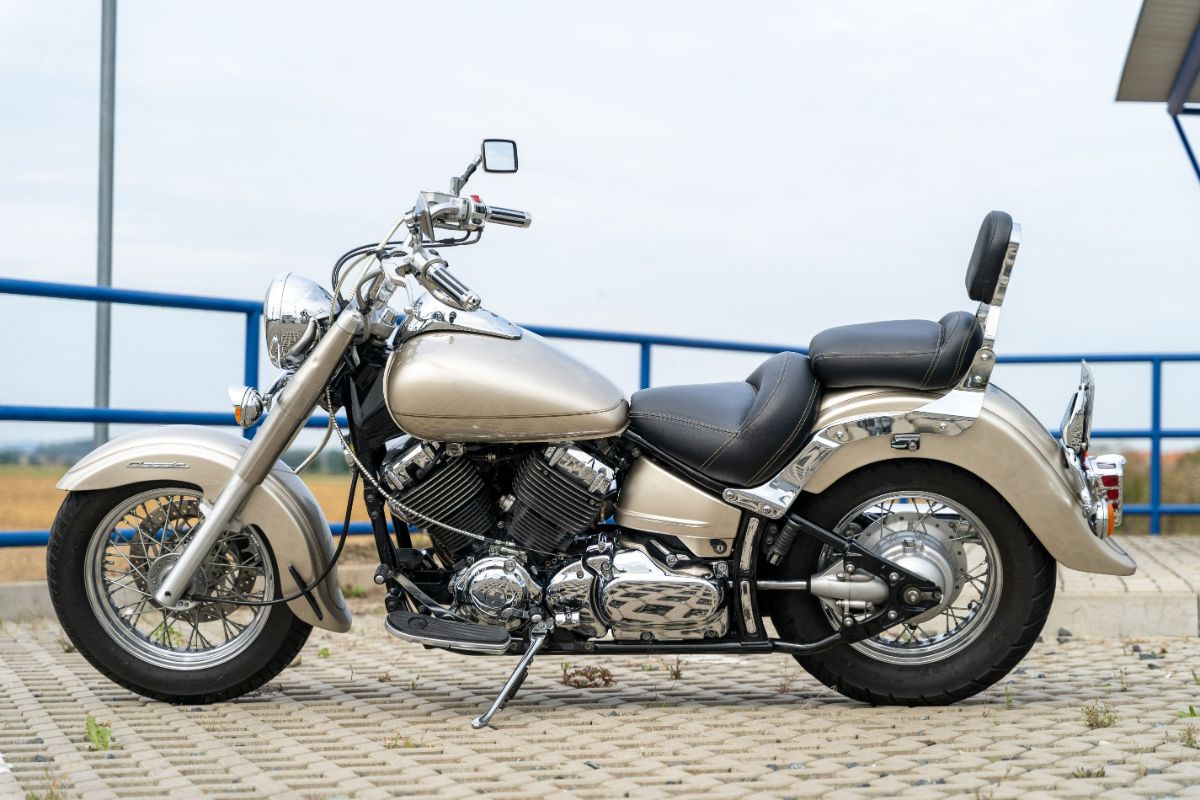 The V-Star is an international superstar, so much so that it has an alias in Japan, Yamaha XVS 400 DragStar. If that’s not a mouthful, I don’t know what is. As dramatic as the name comes off, it’s a pretty normal-looking motorcycle. V-Star entered our zeitgeist in the late 90s.

They vroom’d around in our brains for another 11 years until production halted. They may not be making new units, but this Yamaha is still a hotly sought after item. Going up to 126 mph, the V-Star uses 70 hp to get there. The real winning touch, that outdoes the Harley-Davidson, is the mpg, which is 46. Find one for $4,349. 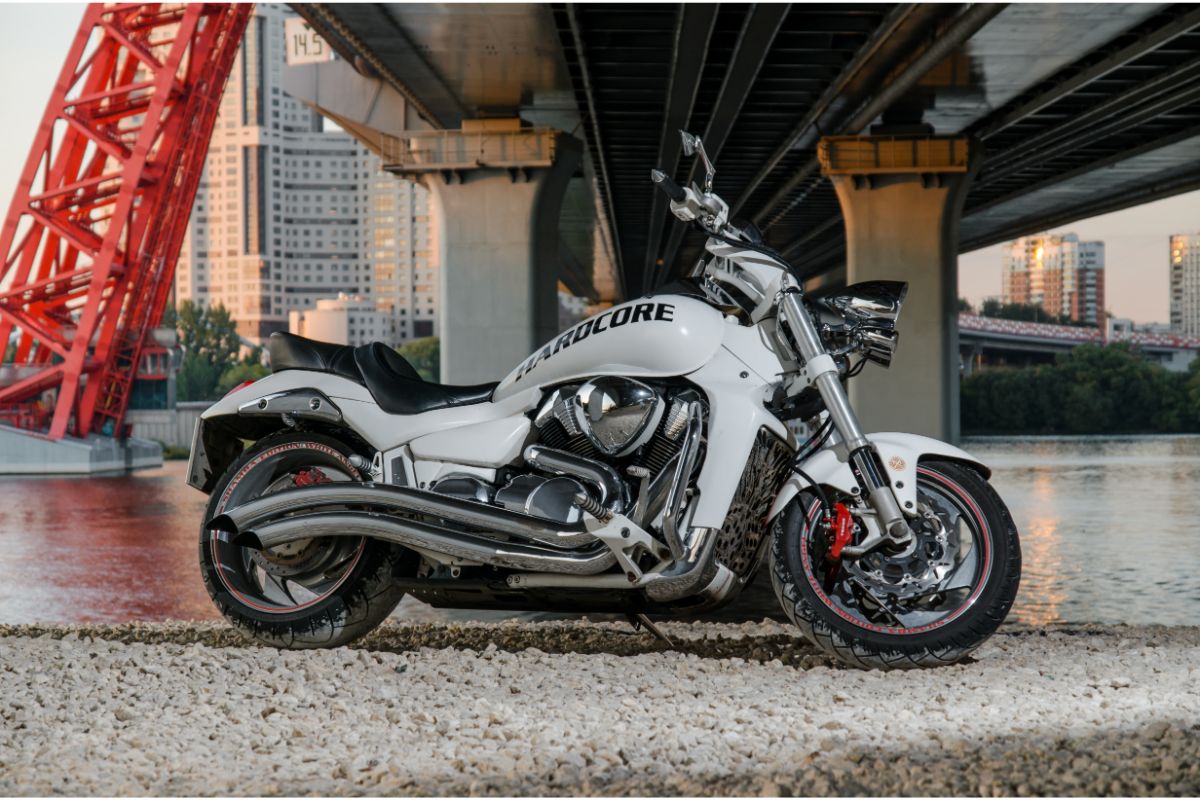 Referred to as a muscle bike, the Boulevard means business. The B.O.S.S. trim, which stands for Blacked Out Special Suzuki, adds a three-toned color scape to a chunky powerhouse on wheels. Each part of the bike is blacked out, adding a coolness effect. 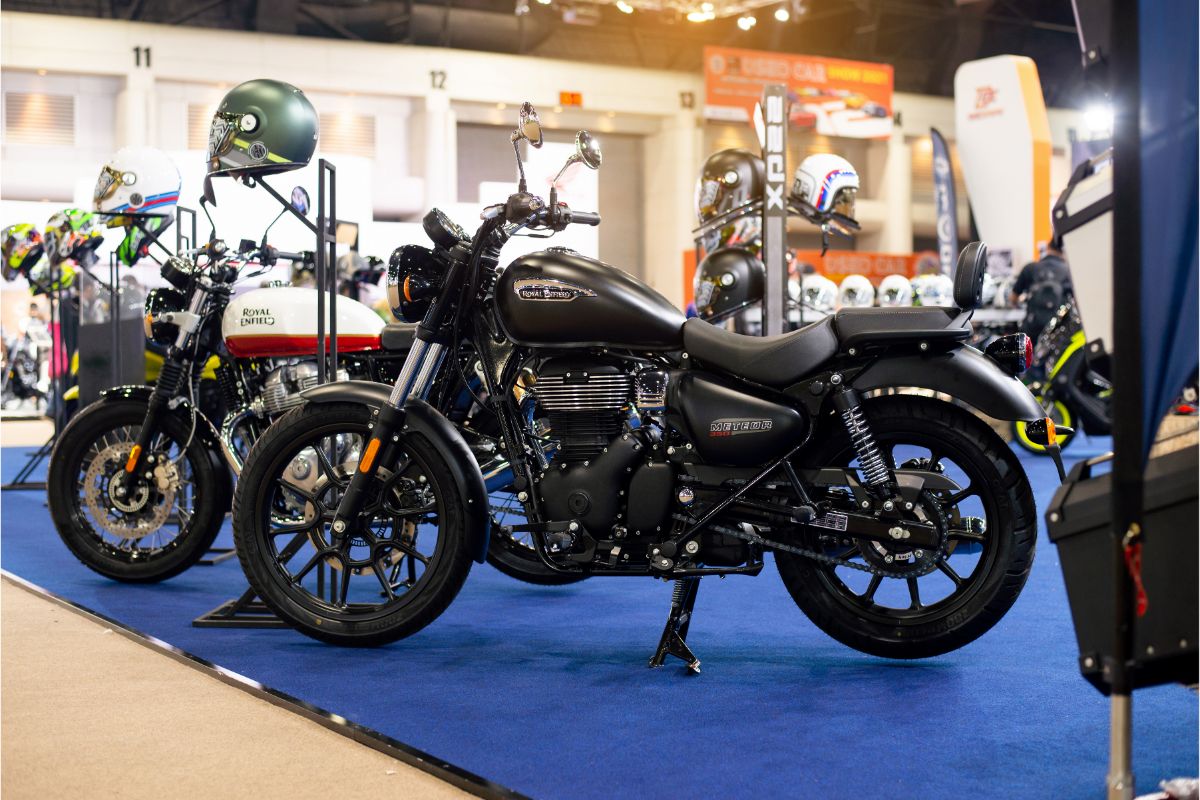 On the lookout for a simpler motorcycle? The Enfield Meteor makes the experience easier than other brands. Want to get the feel of what it’s like to drive a motorcycle at all? This model by Royal might be the perfect fit. The Meteor is a small bike, making it more manageable. Four gallons of fuel can be kept loaded in the tank at a time. If this Royal sounds familiar, you might have heard it’s gaining ground as a racing bike.

When it takes over 12 seconds to get to 60 mph, you know this bike wasn’t meant to blow the doors off of the speed category. After all, the Meteor only has 20 hp with a top speed of 71 mph. If you’re ready to start easing yourself into bike life, you can pick one up for $4,500. 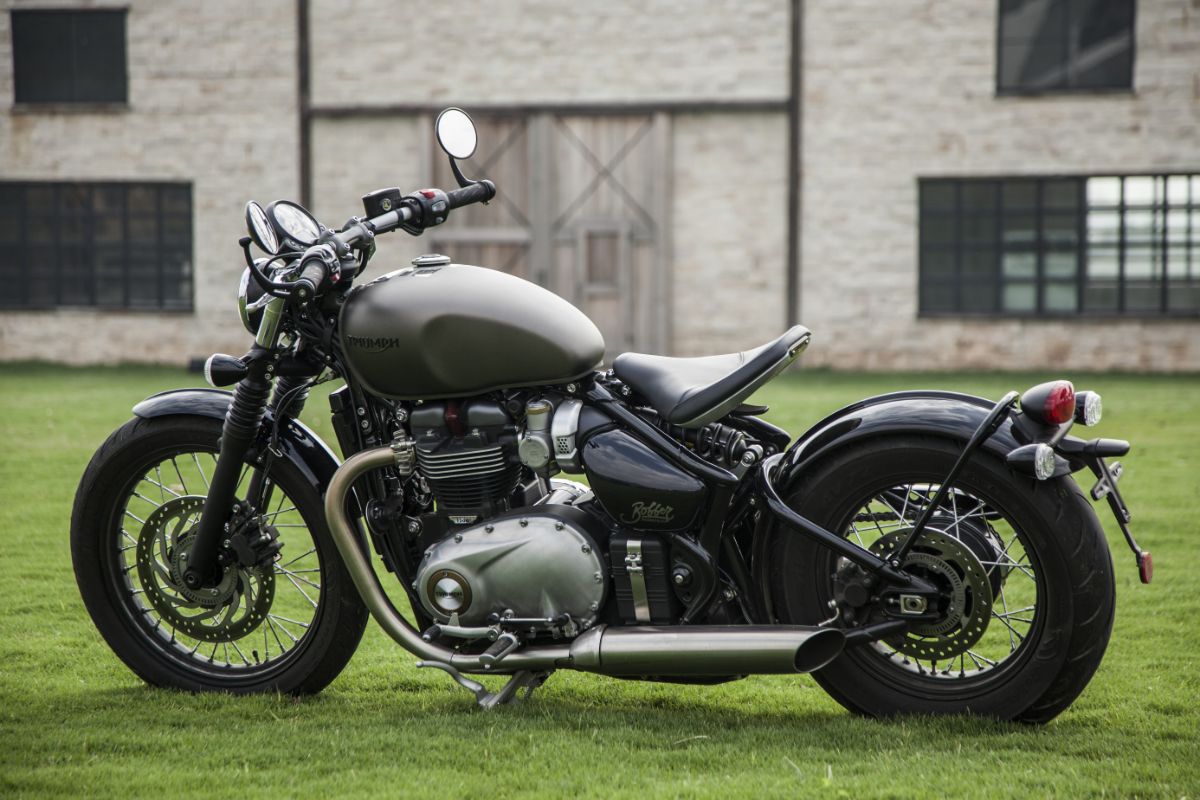 Triumph wanted to build something that would have you so awe-struck that you’d forget any other brand, including Harley-Davidson. They reduced the body design to get closer to bare bones. They want you to see the parts and what makes it tick.

The seat sort of has you hovering over the rest of the bike, kind of an eerie or free feeling, depending on your perspective. Clearly, it was all the inspiration needed to come up with a name. For fun though, could you imagine the bobbing effect whilst hitting the speedometer at 112 mph? Or what it might be like to rush your way to 60 mph in 3.6 seconds? What a trip.

Would you look sweet on a bicycle built for two? You sure would and Honda sought to encourage it. That makes this the roomiest bike to be covered on the list. That’s actually a massive upgrade compared to the original edition back in the mid-70s. A much more basic model, there was no room to even carry anything on your travels.

Since then, Honda has come around to include creature comforts in their design. This is now the kind of bike you wouldn’t mind taking on road trips, it’s quite freeing to be able to bring what you need. So, 46 mpg is helpful for that endeavor.

The Gold Wing has 125 hp, one of the highest on the list. Also, at 140 mph, you could get from Dallas, TX to Atlanta, GA in less than six hours. Of course, that would be with no traffic. In a fantasy world, though, that cuts the commute in half.

More expensive than the Speed Glide, the Honda Gold Wing is $23,900. 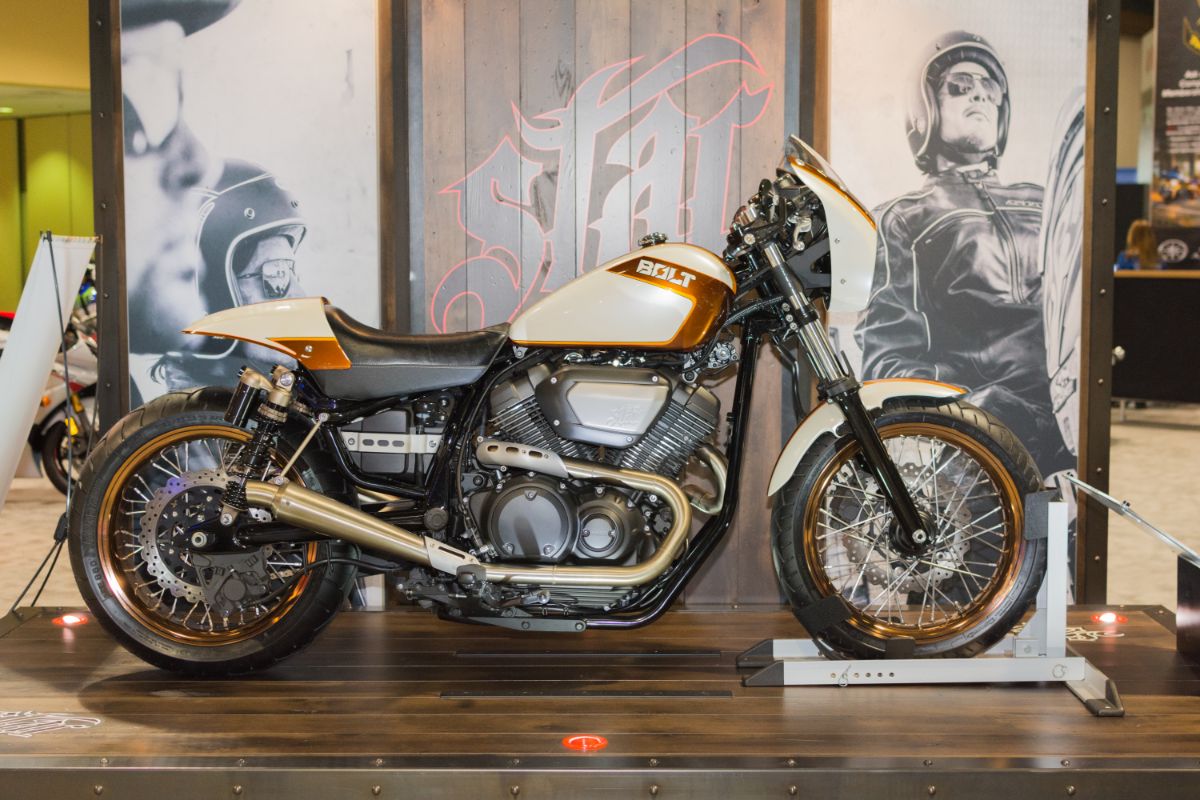 Having such a lower set seat is a different position but it might be one highly preferred to others, depending on preference. It’s features like this that could help someone decide between bikes. This might also be a great possibility if the ultimate goal was to customize it. With fewer accessories and metal, Yamaha makes that transition a bit easier.

It’s called a Bolt because it goes as fast as 106 mph and up to 60 mph in 5 seconds. It has better mpg than the Harley, 51 to be exact. Although, it is sort of surprising to see only 65 hp. Want to buy a motorcycle that gives you the option to personalize it? Get this one for $8,400. 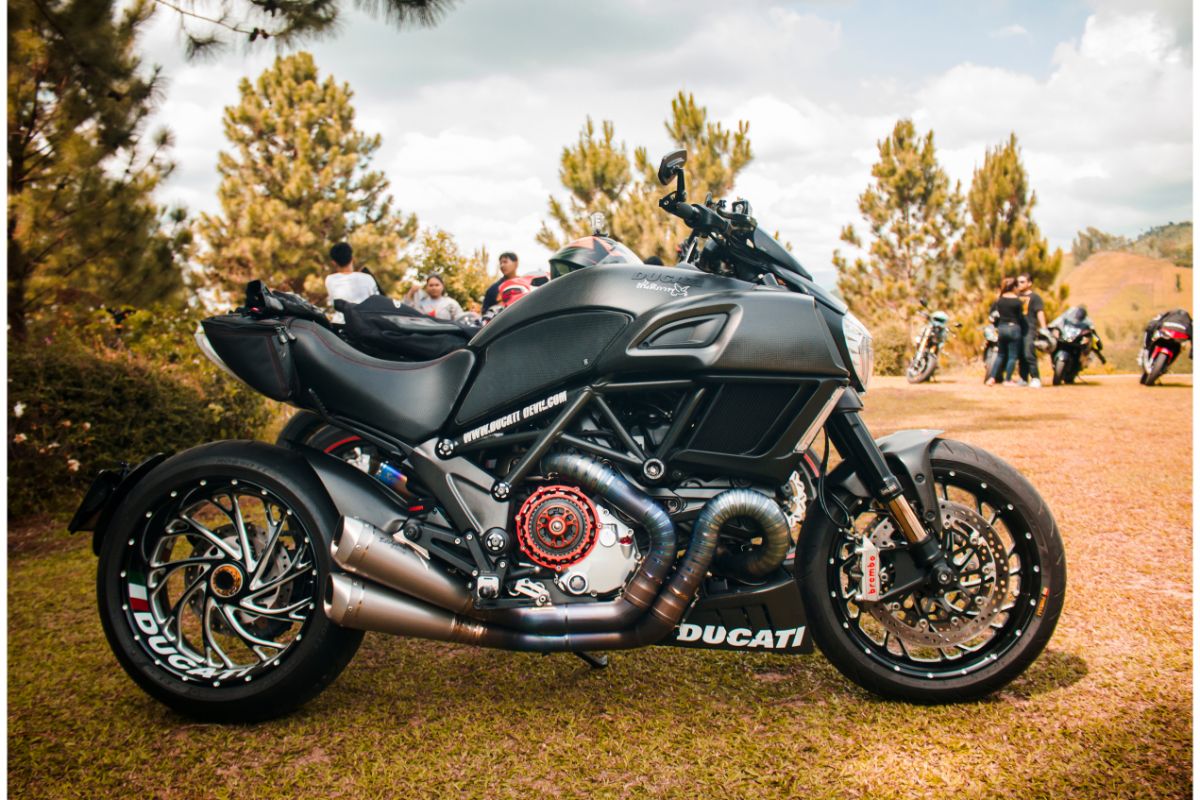 The middle of this motorcycle arches upwards, which can be comforting or annoying in relation to your driving style. Originally called a cruiser, it didn’t take long for audiences everywhere to see the power and might of this unit. Using black and steel trim almost makes the look monotone but the floating seat adds interest back to the view.

1. Which one is Harley-Davidson’s biggest competition?

Brands that Harley-Davidson has to watch out for the most are Ducati, Yamaha, and Triumph. While each individual company has its own view on who its perfect customer is, the typical motorcyclist is male and over 50.

This sample demographic is when customers have more money to play with and can spend time to get what they want. With all four companies vying for the same person, Harley-Davidson uses things like nostalgia to close the deal.

2. What company sells the most motorcycles?

Despite having a brand that is interchangeable with motorcycles, Harley-Davidson is actually not the top seller of the open-air ride. Japanese name brand Honda sells more motorcycles than any other company in the world. To date, they’ve sold over 300 million units.

3. Which motorcycle brand has the best value?

Harley-Davidson retained over 80% of the value five years after purchase. The next closest brand was BMW and they were a cool 4 points behind Harley. That means to say that the name stands for something, as does the vehicle itself.

For years after you buy one brand new, they remain the most valuable as time marches forward. Buying a Harley is almost like making an investment.