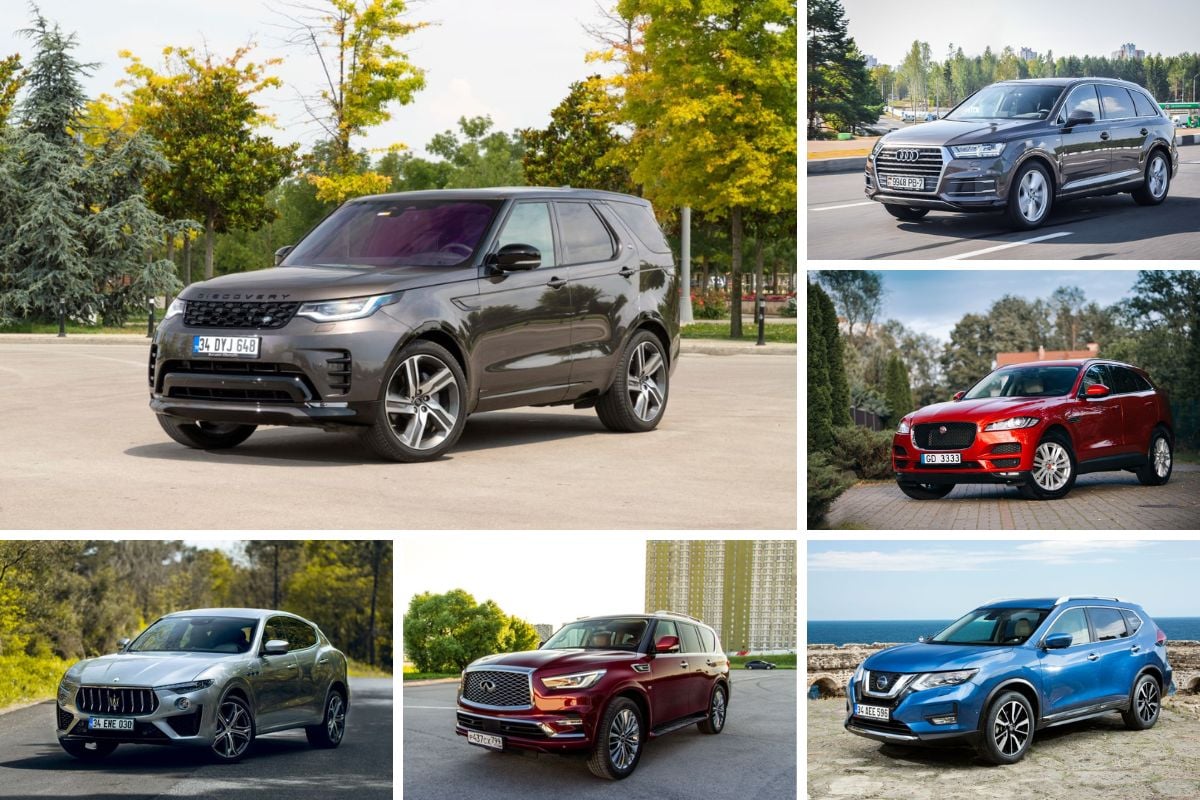 The Land Rover Discovery is a beautiful seven-seater SUV that drives and feels like power on the roads and the trails. This is a car, nicknamed the Disco for short, that many feel can drive through anything.

With a towing capacity of 8,201 pounds and a horsepower of 296 hp, the Land Rover Discovery is a strong vehicle built for strong jobs or built to last for the average consumer. It offers a fuel economy of 19 miles to the gallon on the city roads and 22 miles per gallon on the highway.

Its speed reaches 0 to 60 miles per hour (mph) in 6.5 seconds and it is a sweet, sweet ride. It’s not the only mid-size SUV on the market that offers this kind of power and fuel efficiency. Its box-like shape is conventional with SUV standards, and it looks and drives like a higher-performing car.

With a starting price of $59,700, the Land Rover Discovery compares well to others in its class. My top three favorite that compare to the Disco are the Audi Q7, the BMW X5, and the Jeep Cherokee, as they all offer similar features and performance standards. Learn more about those and others here. 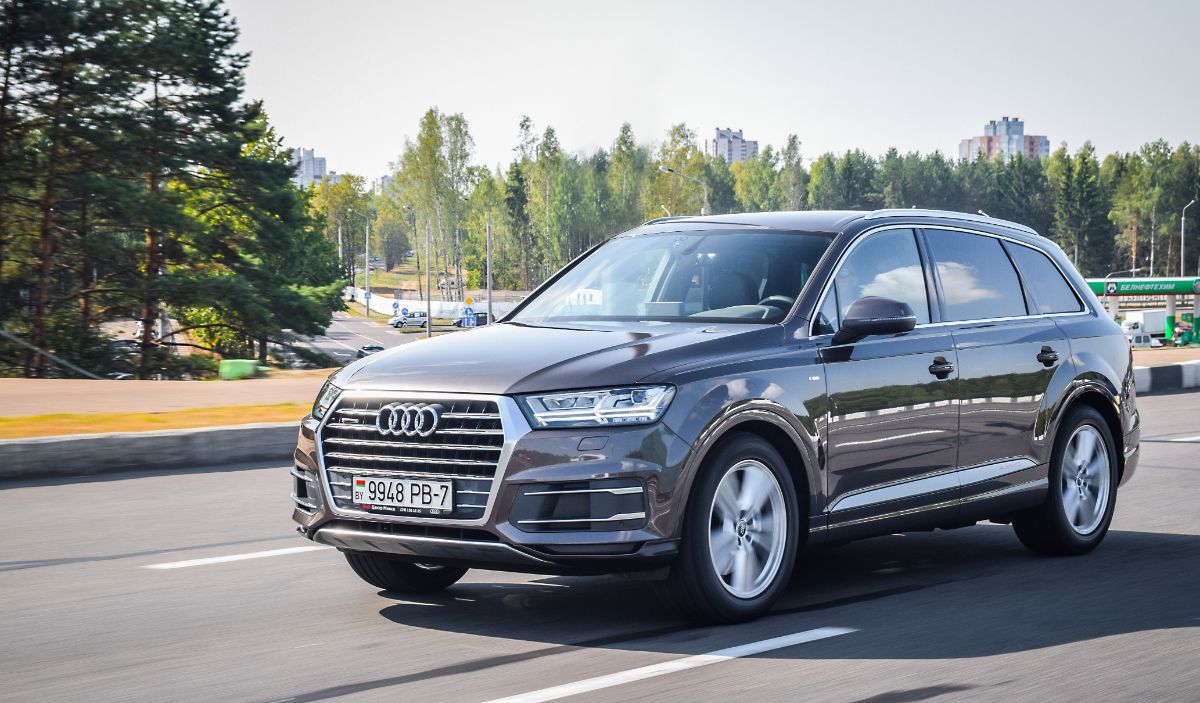 uel efficiency is slightly better with the Audi Q7, where you will get 22.8 miles per gallon (mpg) in the city and 27 mpg on the highway.

Towing capacity here is 7,700 pounds which is slightly lower than the Discovery, but you will barely notice that. The Audi Q7 comes with plenty of room and looks like an SUV, but isn’t as boxy as some others in its class. It’s a sleek and beautiful vehicle where you can feel its power with its first test drive. 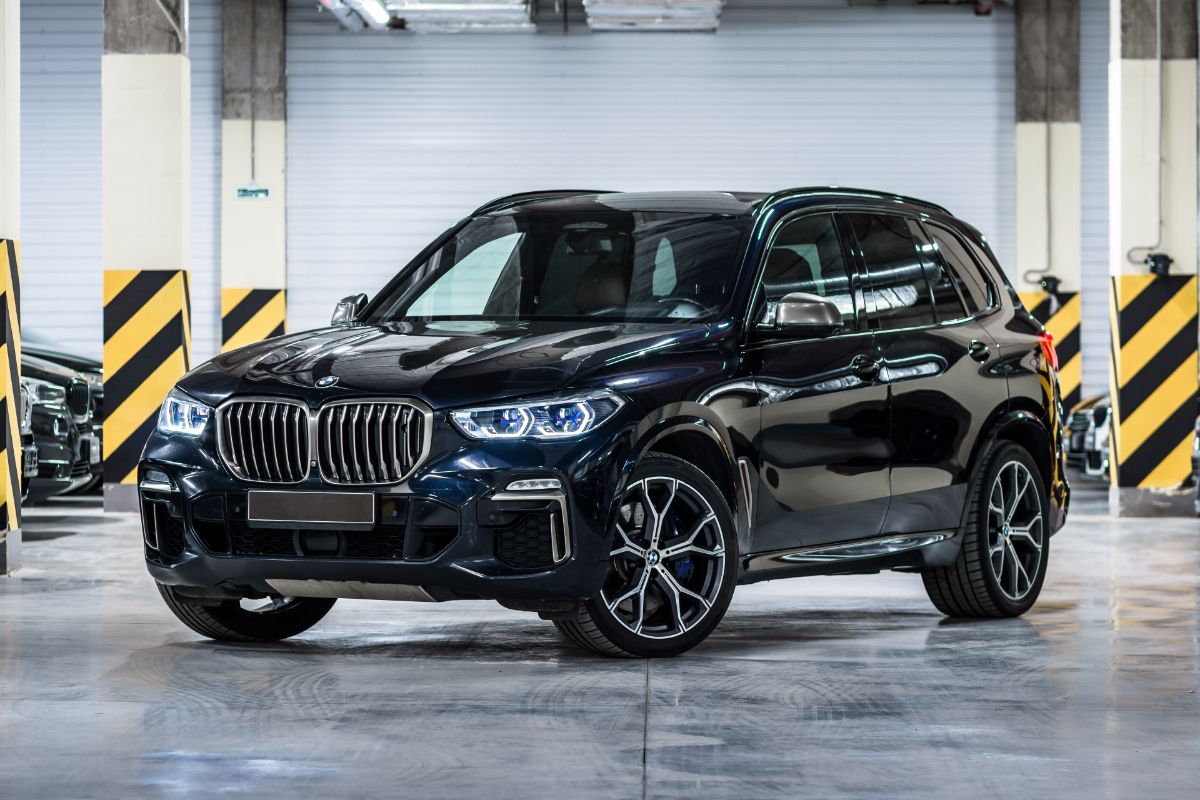 It might surprise people that the BMW X5 is an SUV, as from the outside it looks like a station wagon. It doesn’t offer that big box look many SUVs have, but its performance will show you that it is a car to be contended with on the trails, roads, or highways.

This is a seven-seater SUV where the third row is an option at purchase with a base starting price of $59,400. The horsepower on the BMW X5 can go as high as 523 hp, and the speed performance is 0 to 60 mph in just under four seconds.

Its towing capacity is 7,200 pounds on gasoline and 5,952 pounds for the hybrid model. You’ll love the built-in tech where luxury and functionality combine in an infotainment center that keeps you focused on the road and every passenger inside the vehicle happy and occupied. 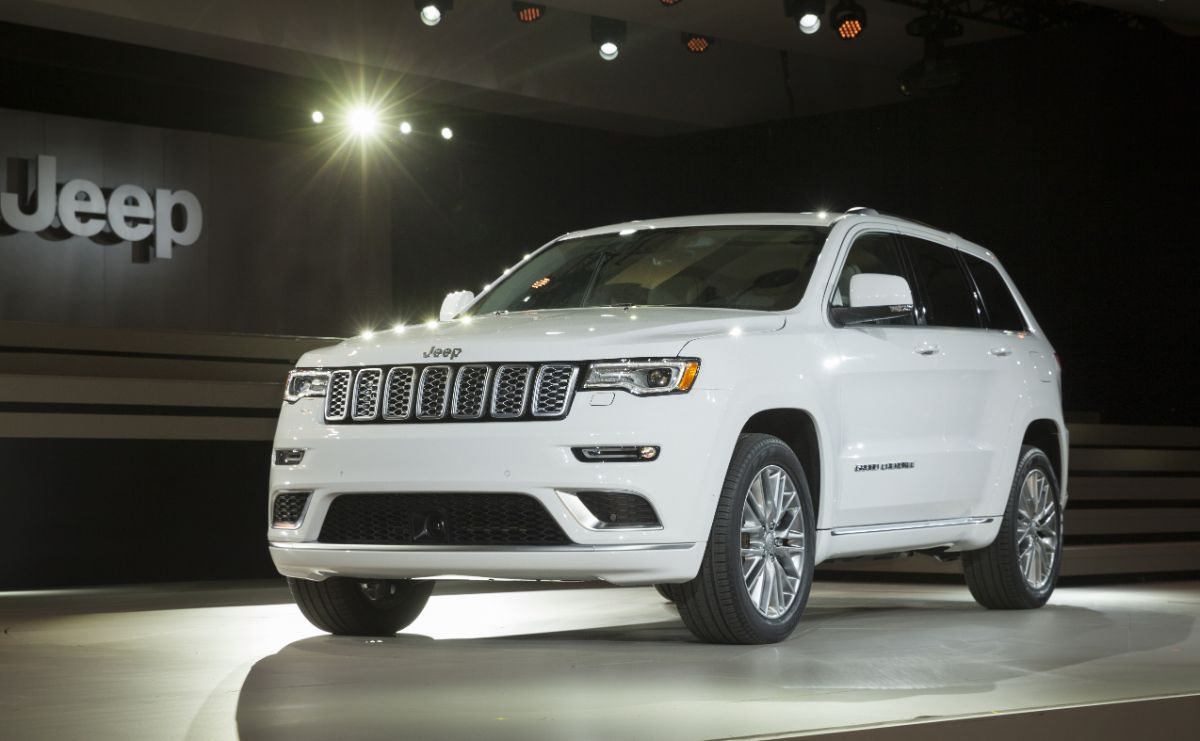 The Jeep Cherokee is a vehicle that comes with a starting price of $42,500 and unlike others in the Jeep brand offers a seven-seater option. It is the only Jeep in the lineup that can say that.

You’ll have options in either a 2.4 L four-cylinder or a 3.2 liter V6 turbocharged engine with a horsepower capacity ranging from 214 hp to 270 hp.

The speed performance here is 0 to 60 mph in just under 7 seconds, and its fuel efficiency is as excellent if not better than the Discovery at 23 mpg in the city and 31 miles to the gallon on the highway.

The towing capacity is smaller at 4,500 pounds, but you can still tack on your camper, trailer, or boat and go anywhere you want with your Jeep. This vehicle won’t disappoint. It looks like an SUV, and stays true to the Jeep brand exterior but has become more sleek and contemporary over time. 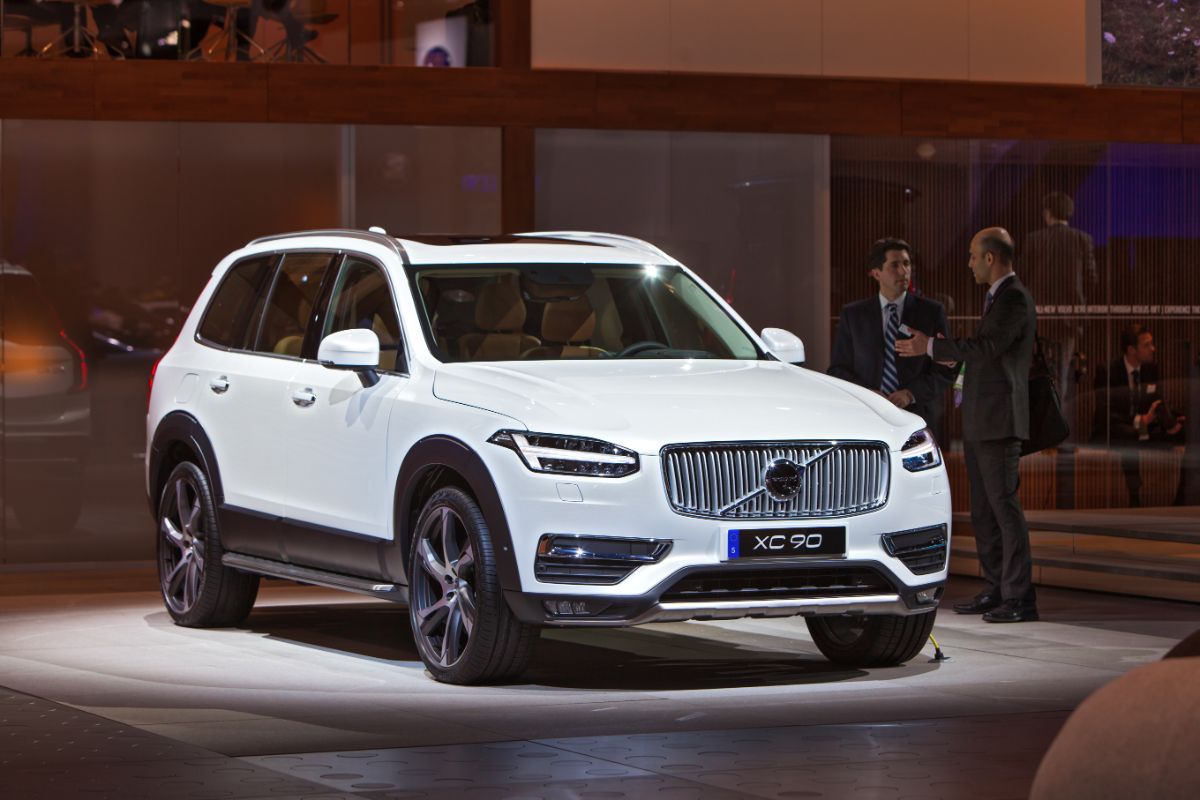 The Volvo XC90 has a nice starting price of $49,900 which is lower than the Discovery, in a seven-seater SUV option you’ll enjoy with a family or road trip with your favorite people.

The power in this vehicle will surprise and delight you, and it outperforms the Disco this way with a horsepower range of 295 to 455 hp depending on which turbocharged engine you prefer starting with a 2.0 liter four-cylinder engine.

This car is what you expect from Volvo, safe, reliable, and practical for everyone you are going to be driving in it. This is not always going to be the best car for fields and outbacking, but you can enjoy a towing capacity up to 5,000 pounds.

Fuel efficiency is not something you will complain about here, with 21 miles per gallon in the city and 30 miles to the gallon on the highway. Overall, this is also a very sleek car and something that you will feel safe in. 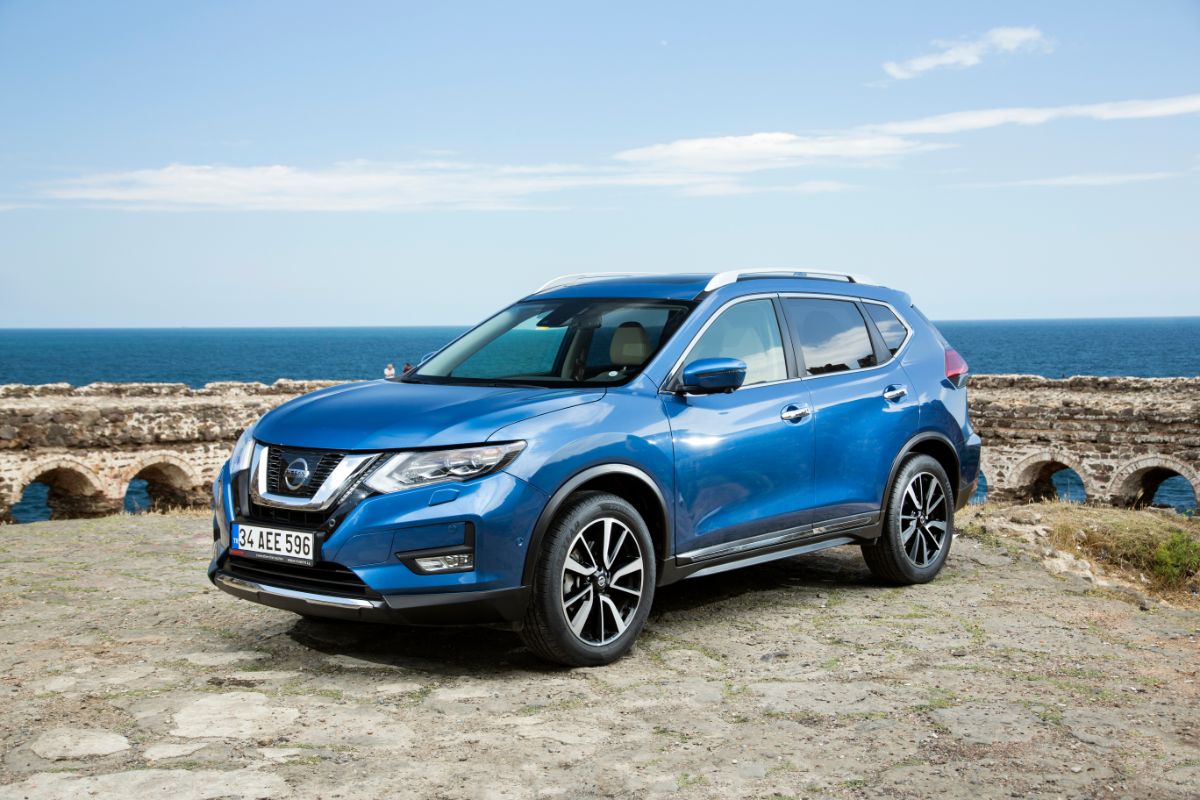 The Nissan X-Trail has a boasting point of an excellent fuel economy and a lower sticker price making it more affordable than the Land Rover Discovery in a number of ways.

Its base price is $32,100, and the fuel economy range is 46.3 miles to the gallon in the city and 50.4 miles to the gallon on the highway. The speed power will have you driving from 0 to 60 mph in 11 seconds, which is almost twice as slow as the Discovery.

Its horsepower of 169 hp comes from a smaller 1.6 liter fuel injected engine which to some may make it seem like a less efficient car. However, the seven seats are comfortable, and the car comes equipped with the tech you need to have a safe and productive drive every time.

With trailer brakes the Nissan X-Trail tows less as well with a towing capacity of 2,000 pounds or 1,000 pounds with no brakes.  The car looks like a smaller SUV with a sleek and contemporary trim that almost disguises its seven-seat capacity. 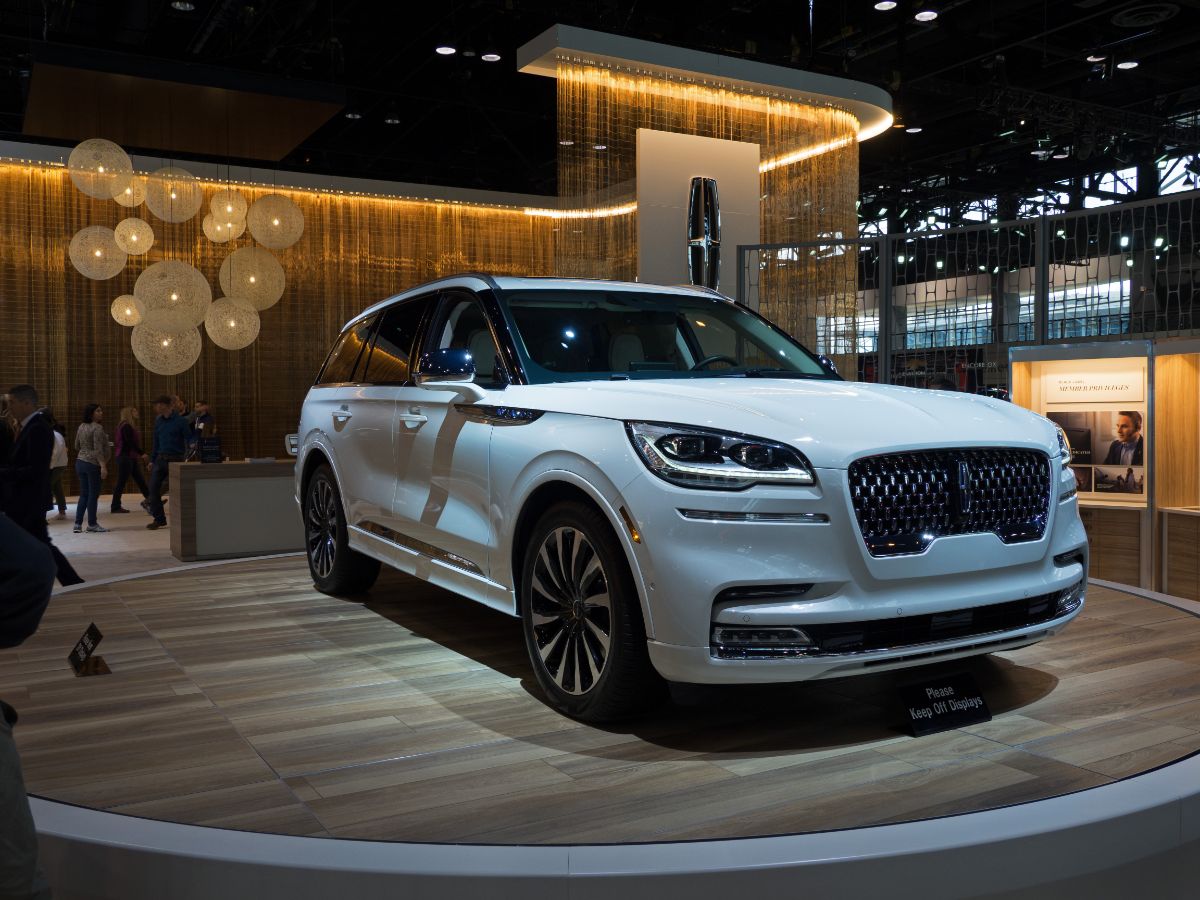 The Lincoln Aviator is a seven-seater vehicle that you can count on that starts in the same price range as the Land Rover Discovery with a base price of $53,340. The power is there, in a 3.0 liter V6 turbocharged engine that will bring 400 hp to the table.

Its speed is comparable to the Land Rover Discovery, and will get you from 0 to 60 mph in just under 7 seconds. The fuel economy here is nice, where you will get 18 mpg in the city and 26 mpg on the highway.

Overall, the Lincoln Aviator looks like an SUV as well, with the larger body and trim that suggests the car is as powerful on the inside as it is on the outside. The large boxy look bodes well for its towing capacity of 5,600 pounds. 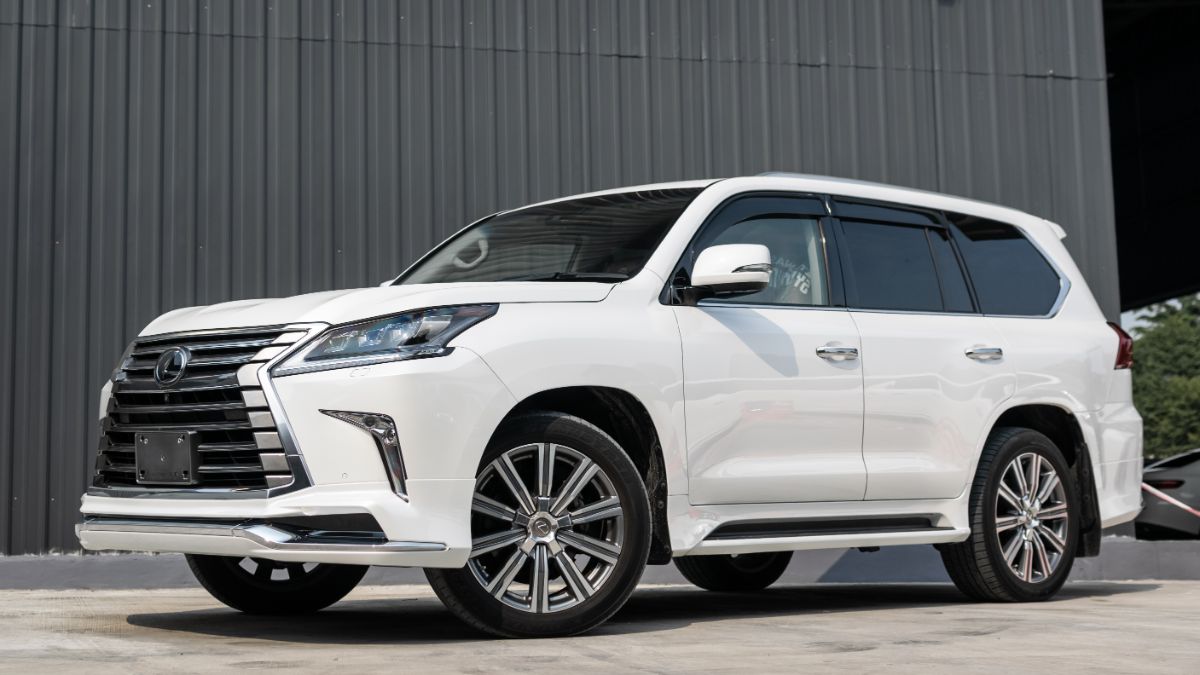 The Lexus GX offers slightly more power than the Lincoln Aviator with a higher horsepower and towing capacity and in the same price range. This is a seven-seater car with a starting price of $56,125 and plenty of options.

You’ll love the speed performance that is slightly lower than the Land Rover Discovery where the Lexus will take you from 0 to 60 mph in just under 8 seconds. The power in this car comes from the 4.6 liter V8 engine that brings 301 hp to your drive.

Overall, the car looks like an SUV and functions well and even better than you might expect. You’ll love being one of the big powerhouses on the highway with this Lexus. 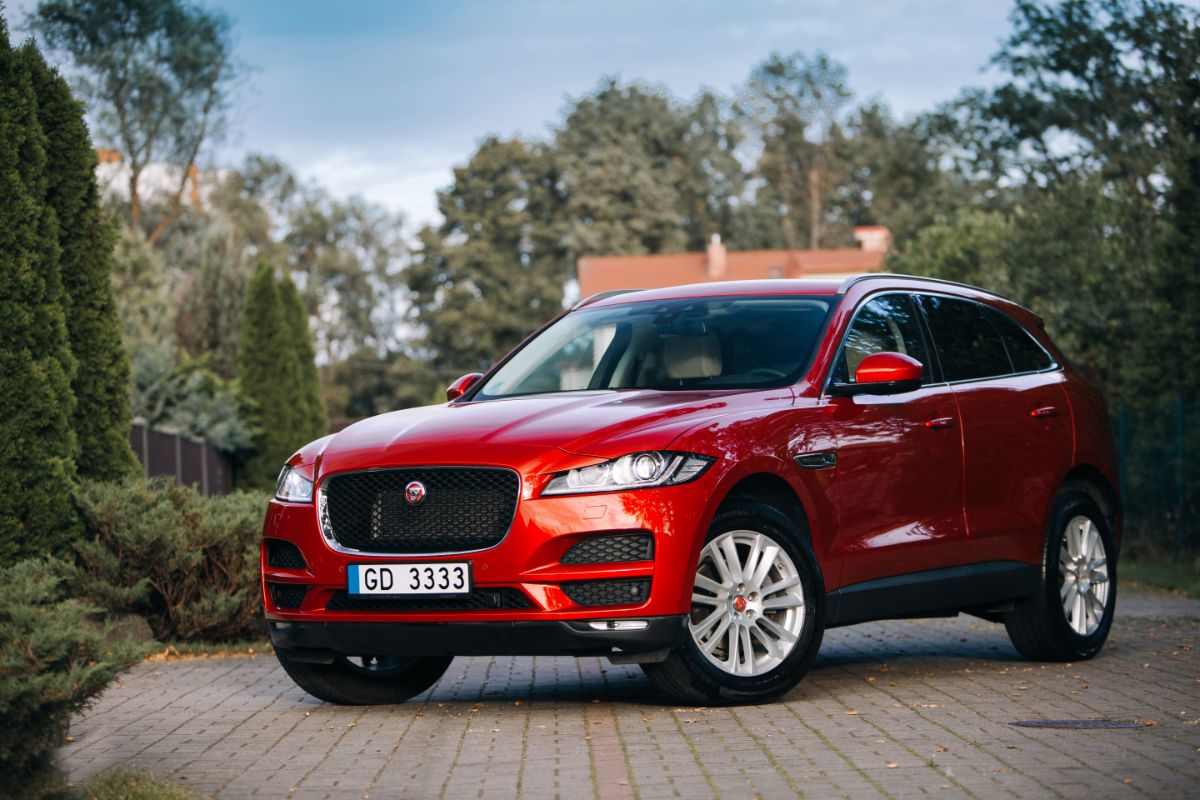 The Jaguar F-Pace brings the power of a Jaguar to the SUV world, with beautiful speed and performance that you will enjoy. It is for those that prefer and can do with a smaller SUV with its five-seat capacity, but its performance will make up for that.

For speed, the Jaguar F-Pace will get you from 0 to 60 in less than four seconds, a nice feature for a car with a starting price of $52,400.

For power, the Jaguar F-Pace has a horsepower of 247 hp which is not too shabby for a four-cylinder 2.0 liter fuel-injected turbocharged engine. You can get good mileage here, too, at 22 miles to the gallon in the city and 27 miles to the gallon on the highway.

The Jaguar F-Pace can tow up to 5,291 pounds, but you might never guess it. Jaguar did not compromise its sleek brand look here in this mid-sized SUV, you almost can’t tell it’s an SUV from its rear.

The Cadillac XT6 is considerably faster than the Land Rover Discovery 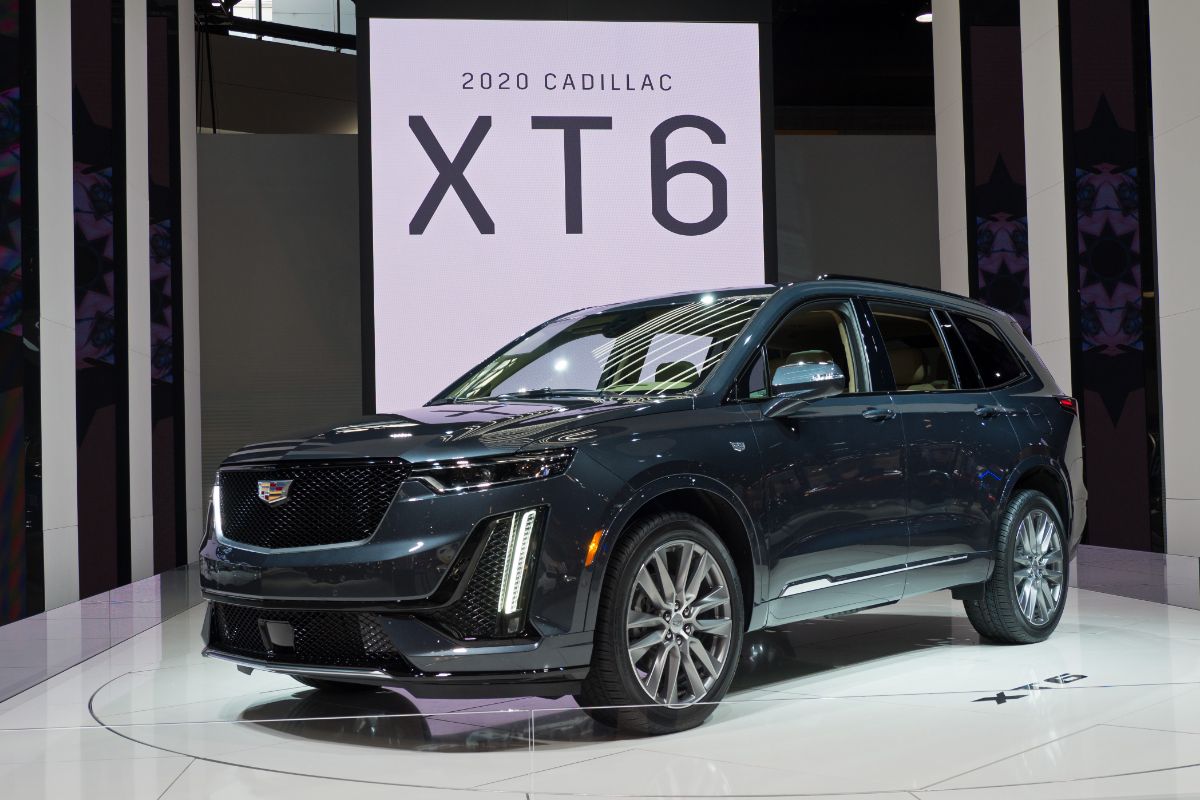 The Cadillac XT6 is much faster than the Land Rover Discovery, but doesn’t have the same horsepower. Still, at 235 hp on a four-cylinder fuel-injected engine, the Cadillac’s power isn’t too bad. It rings in lower than the Discovery when it comes to the price tag at $48,3996 as the base price.

It is a seven-seater in some models but can perform as a six-seater if the second row of seats comes with captain’s chairs. For speed, the Cadillac XT6 is going to go from 0-60 in 4.4 seconds.

Overall, there is nothing you aren’t going to like about this car that performs in many cases at the Escalade level. The exterior is as beautiful as the synthetic leather seats and will shine on the roads in this boxy look that mirrors a trendy wagon. 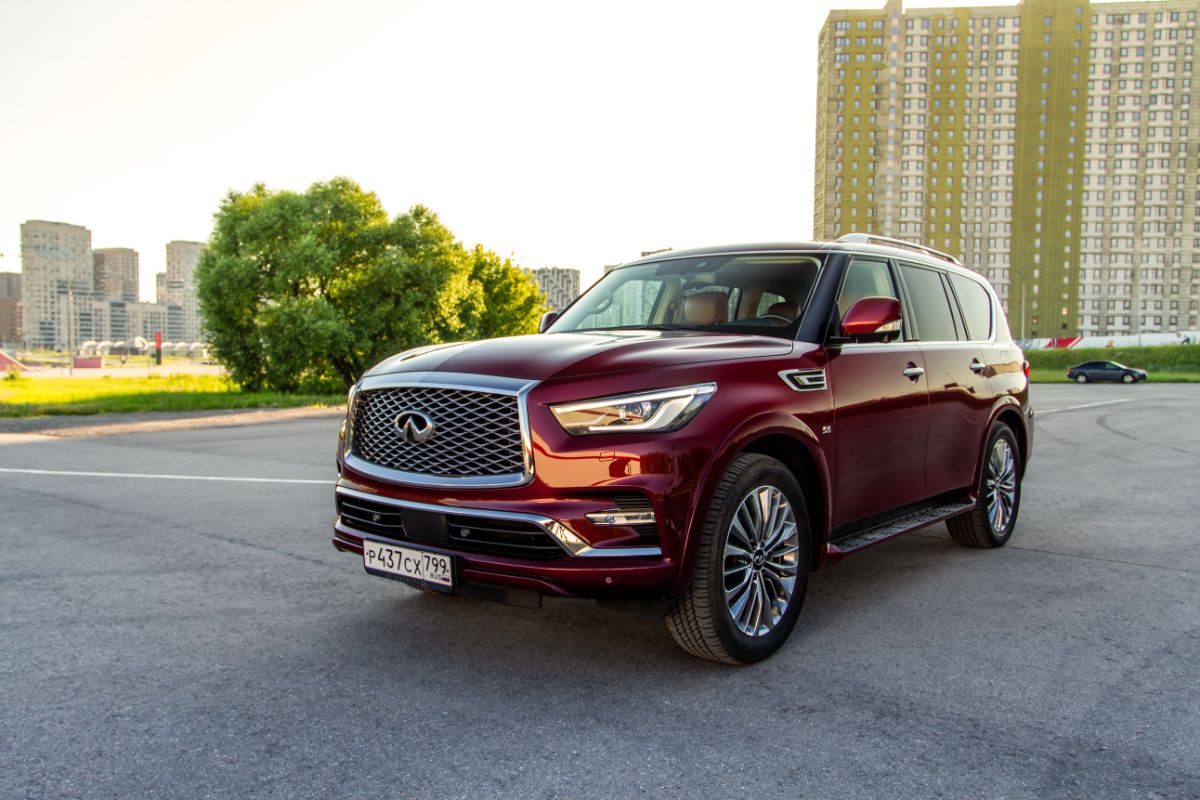 The seven and even sometimes eight-seater Infinity QX80 outperforms in every way when compared to the Land Rover Discovery, but you are going to pay a lot more for that.

That is attributed to the V8 5.6 liter engine that comes with a fuel efficiency of 14 miles to the gallon in the city and 20 miles to the gallon on the highway. Its horsepower is impressive at 400 hp, and you’ll like the towing capacity of 8,500 pounds.

All of this begins with a base price of $71,100.  Where most cars with a third row are difficult to sit in, the Infinity can be short on the legroom, but many adults won’t mind the back row. 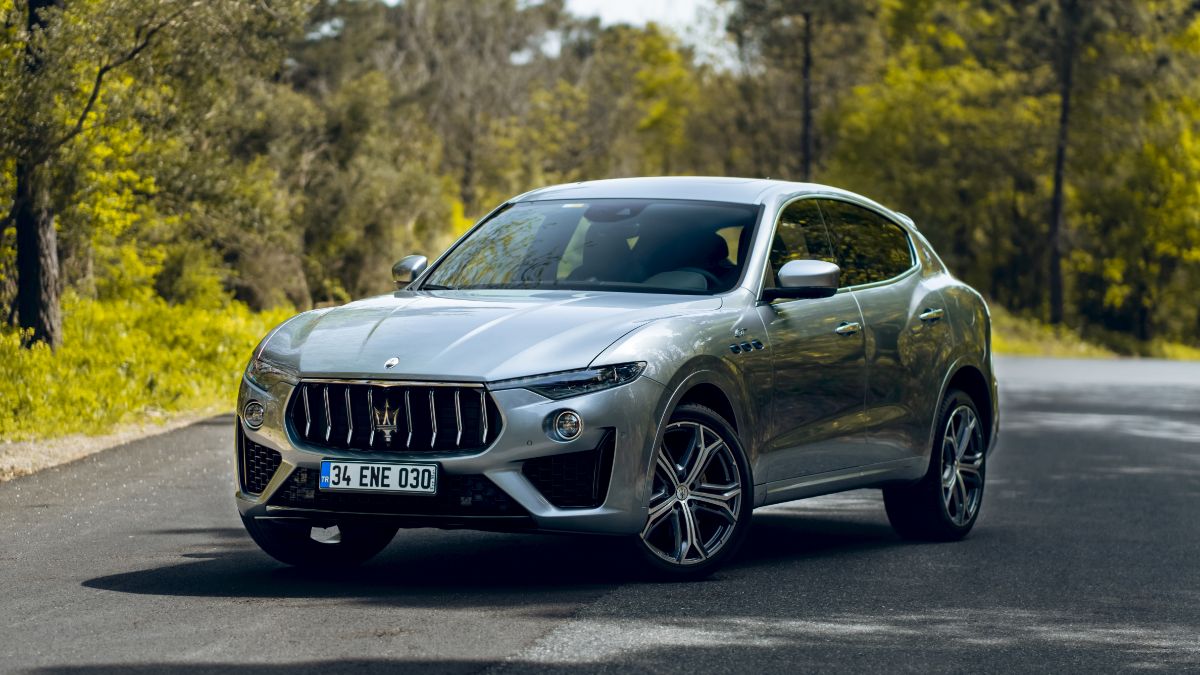 The five-seater Maserati Levante is as fast as you would expect it with 345 hp that comes from a 3.0 liter V6 turbocharged engine.

It goes from 0 to 60 in less than 3.7 seconds and brings a fuel efficiency of 16 miles to the gallon in the city and 22 miles to the gallon on the highway. The towing capacity here comes in at 5,952 pounds which is lower than the Discovery, but the price tag at $79,400 is higher.

All of this will surprise you with the look of the vehicle. This car does not come across as an SUV, but it has all of the power of one of the best. You’ll feel that in your first test drive. 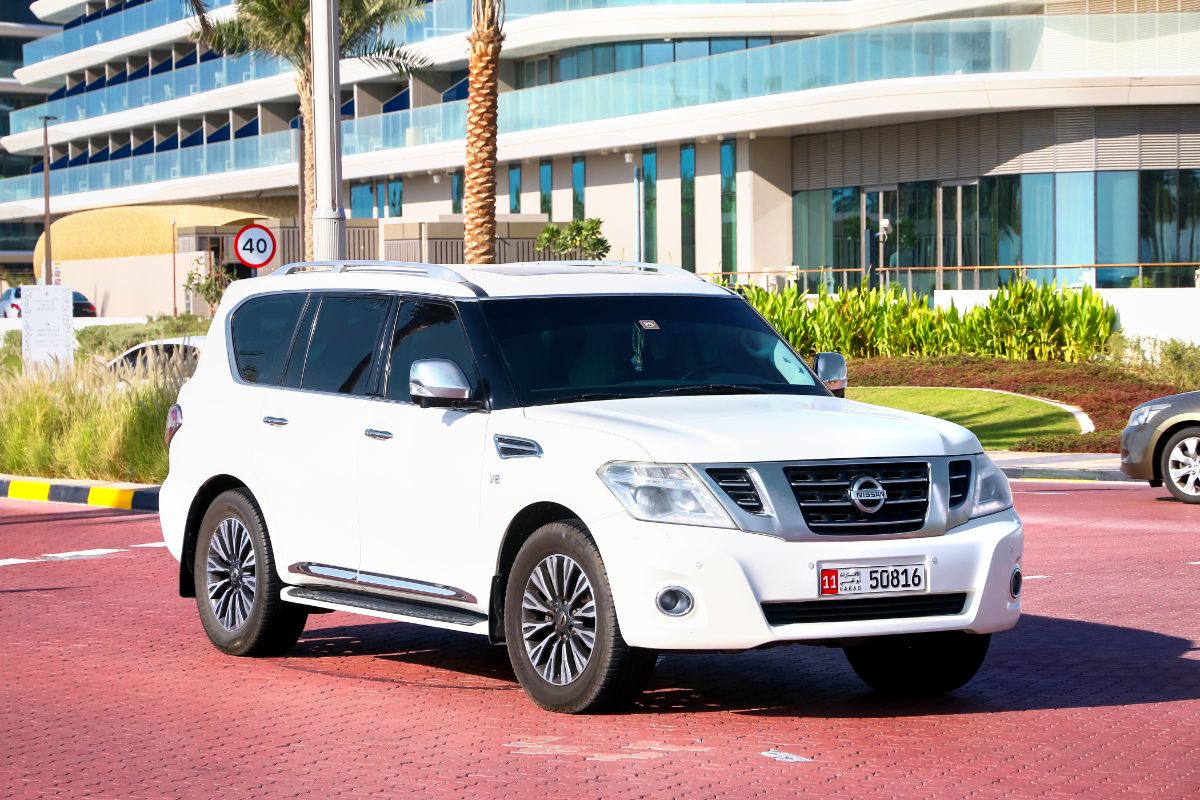 The Nissan Patrol is an efficient vehicle in every way and brings the authentic look of an SUV to your driveway. It starts with a sticker price of $47,500 for a base model which will still get you the third row and seven seats. The horsepower on this V8 is sweet at 390 hp.

Q: What safety features does the Land Rover Discovery have?

A: The Land Rover Discovery comes with Wade Sense, a mirror-mounted sensor that can help you determine how deep the water that you are driving in will be. This is one of the most exciting safety features of the newest model year. You will also enjoy traditional lane keeping assist, automatic emergency brakes and monitors for your blind sports. Adaptive cruise control continues the list along with a wide range of safety tech that you won’t want to stop using.

Q: What technology is found on the Land Rover Discovery?

A: The Land Rover Discovery is equipped with tech that includes a standard wireless charging station and Infotainment system with an 11.4 inch touch display. You can opt-in for a color display if you want the $1,000 price tag that goes with it on the Metropolitan trim. You’ll also enjoy the Meridian sound system.

Q: How much is the most expensive model of the Land Rover Discovery?

A: The most expensive model of the Land Rover Discovery can get as high as $76,000 for the Metropolitan trim. This make also has the Sport trim, the R-Dynamic trim, and the R-Dynamic HSE. If you want a larger engine, you’re going to see the base jump to $66,650. Otherwise, your starting price is in the high $50K range.