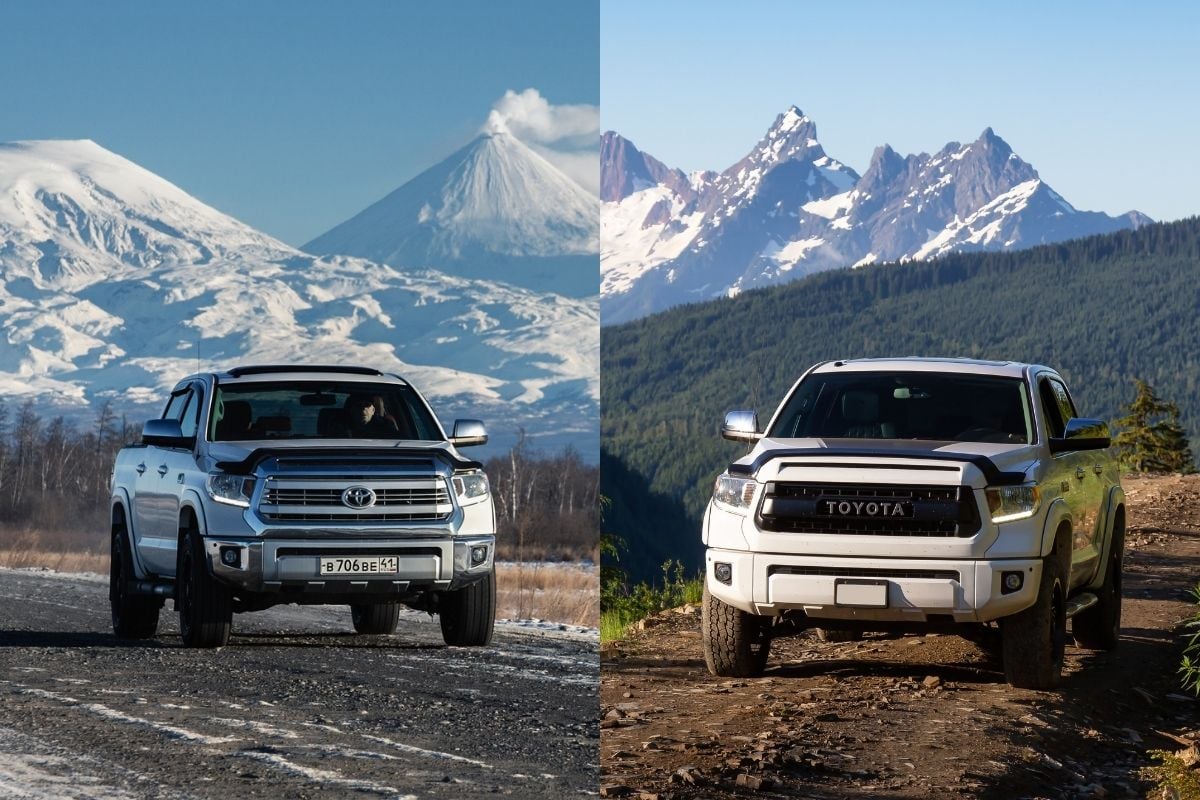 Driving along the circumference of the earth, you would have to go round 40 times to cover a million miles. Such an accomplishment needs a reliable, resilient vehicle.

The Toyota Tacoma and Tundra have both proven that they are reliable and resilient. Victor Shepherd has put a million miles on his Tundra, while Mike Neal has 300,000 more miles above the million mark on his Tacoma.

These are just two examples of exemplary service by these two trucks. While the two trucks’ models are ancient, the product promise remains the same. So let us learn what these trucks are all about. 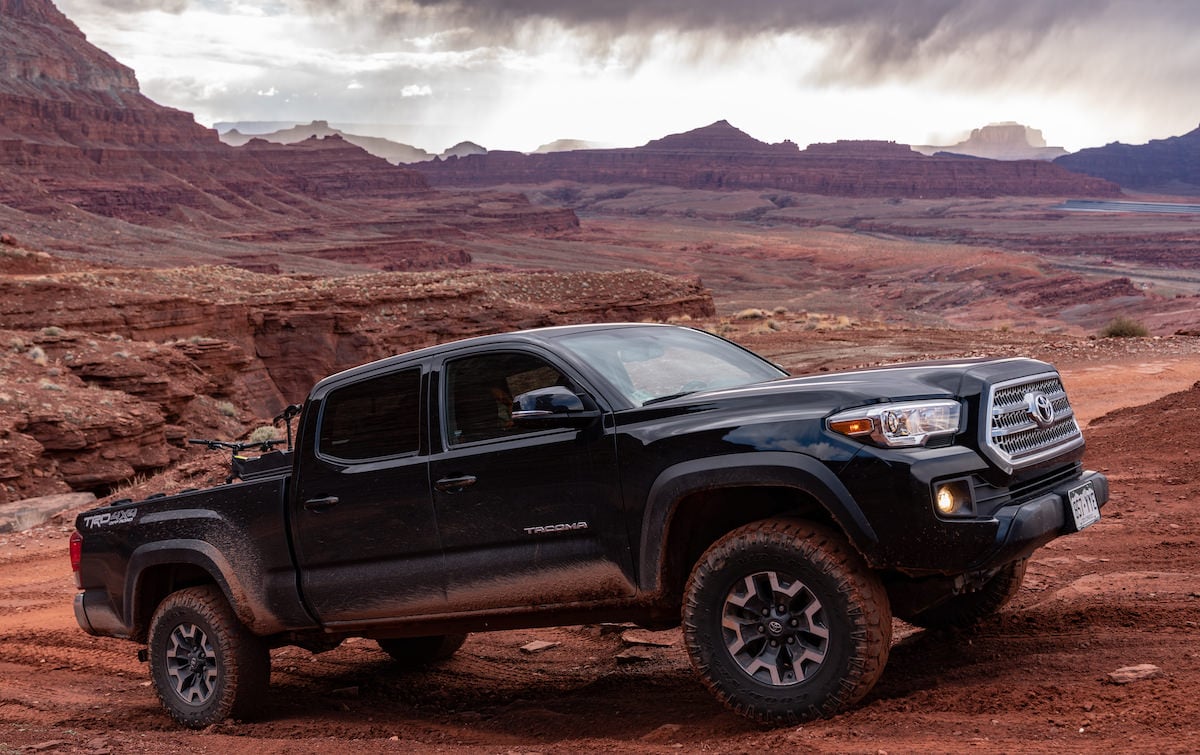 A Toyota Tacoma is a mid-size adventure truck for off-road and off-grid rendezvous. With its robust exterior coupled with its outstanding performance, the Tacoma is ready to take you from your tarmacked backyard deep in the woods.

Related to: 11 Pickup Trucks Similar to the Toyota Tacoma

This gentle beast is produced in the US and Mexico, but it sells as far as Bolivia, Canada, Costa Rica, and New Caledonia. 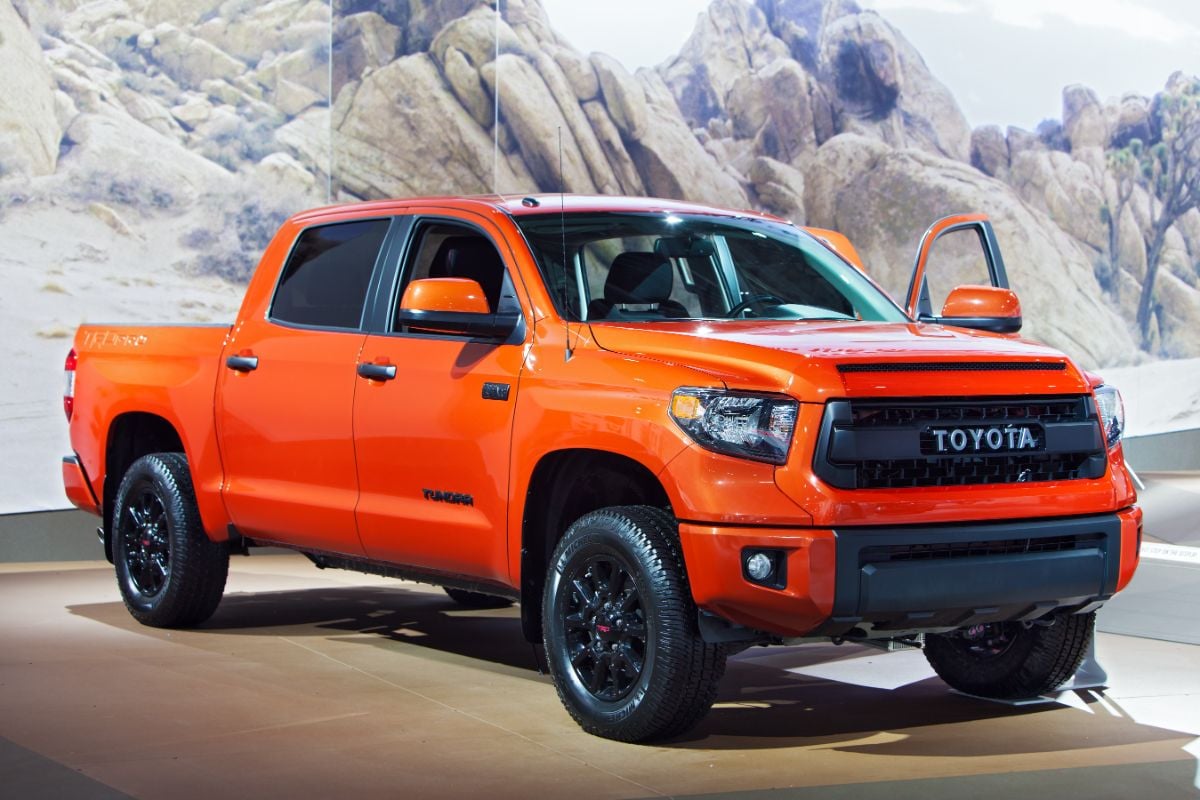 On the other hand, A Toyota Tundra is a full-size truck with impeccable power. A Tundra combines a powerful machine and a comfortable experience while taking your cruise into the adventure.

It gives you control of your terrain and allows you to take on adventures you wouldn’t unless you have a Tundra.

In 1999, Tundra came to market as the second full-size pickup by a Japancese company. But it was the first to be produced within the US. First, it was manufactured in Princeton, Indiana, but later, Toyota moved its production to San Antonio, Texas.

How Are Tacoma and the Tundra Similar?

The Tacoma and the Tundra are very similar, and the preference of one over the other comes down to personal needs. These are some of the things the trucks have similar.

The options with either a Tundra or a Tacoma are very similar. For instance: both trucks offer two or four-wheel drive options, they provide multiple bed sizes, they offer two engines for those who might need more performance, and they also offer two cab sizes.

In addition, since they are adventure trucks for individuals who want to explore untarmacked trails, they can choose from add-ons like TRD Off-Road and the TRD Pro. 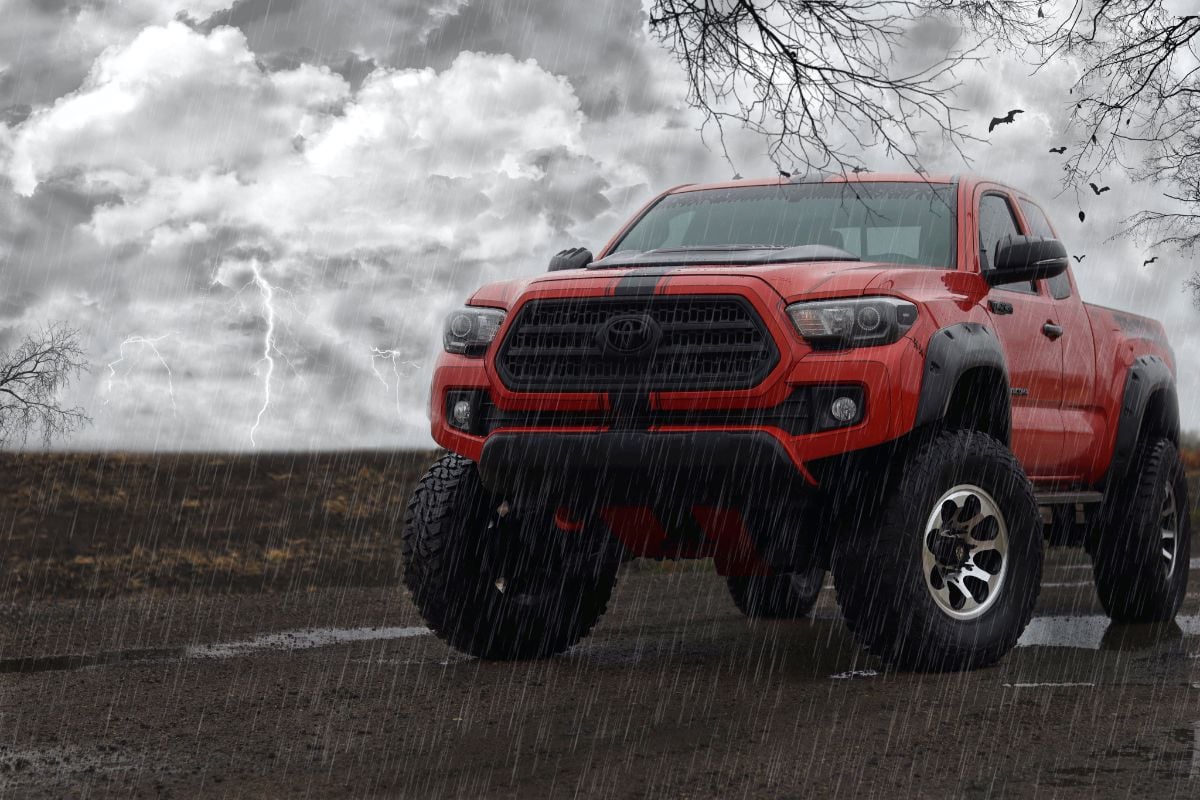 The Toyota Tundra comes fitted with a robust 5.7L aluminum i-FORCE V8 engine, whereas the Tacoma features a 3.5L V6 engine. These engines deliver different performances, and as evident, the Tundra’s engine is much superior than the engine under Tacoma’s hood.

While the Tundra outperforms the Tacoma in this regard, the performance of the Tacoma is nothing short of impeccable considering other factors, including the fact that it is almost 1000 pounds lighter than the Tundra.

The power of the Tundra also allows it to tow more capacity than the Tacoma. A Tundra can tow a maximum of 10,200 pounds, but a Tacoma maxes out at 6,400 pounds. Six thousand four hundred pounds is still a significant capability as it can tow a standard-sized boat or camper.

The small engine size of the Tacoma allows it to be more fuel-efficient, delivering 18 mpg city and 22 mpg highway. On the other hand, the Tundra is much more consuming, giving 13 miles per gallon city and 17 miles per gallon highway.

Looking at the Tundra or the Tacoma, you can easily see the size difference. The Toyota Tundra is bigger than the Toyota Tacoma. But it is because the Tundra is a full-sized pickup while the Tacoma is a midium-sized.

With modern construction that is very constrained, occupying minimal space, it is crucial to understand the dimensions of the trucks to know if you need to re-invest in your garage or find an outside parking spot, especially if you opt for the Tundra.

Tacoma’s maximum bed length is 73.7 inches, compared to the Tundra, whose longest bed is 97.6 inches. A clear difference of 23.9 inches. But the shortest Tundra bed is only four and a half inches longer than the longest bed length for the Tacoma.

In addition, the Tacoma is 74.4 inches wide and 75.2 inches if you prefer the Double cab model. On the other hand, the Tundra is 79.9 inches wide. Moreover, all trims from the Tacoma are 212.3 inches in length, whereas those from the Tundra are 228.9 inches.

The Tacoma works when you want to be economical with space. But the difference between these two trucks is not so much in their size but their performance. 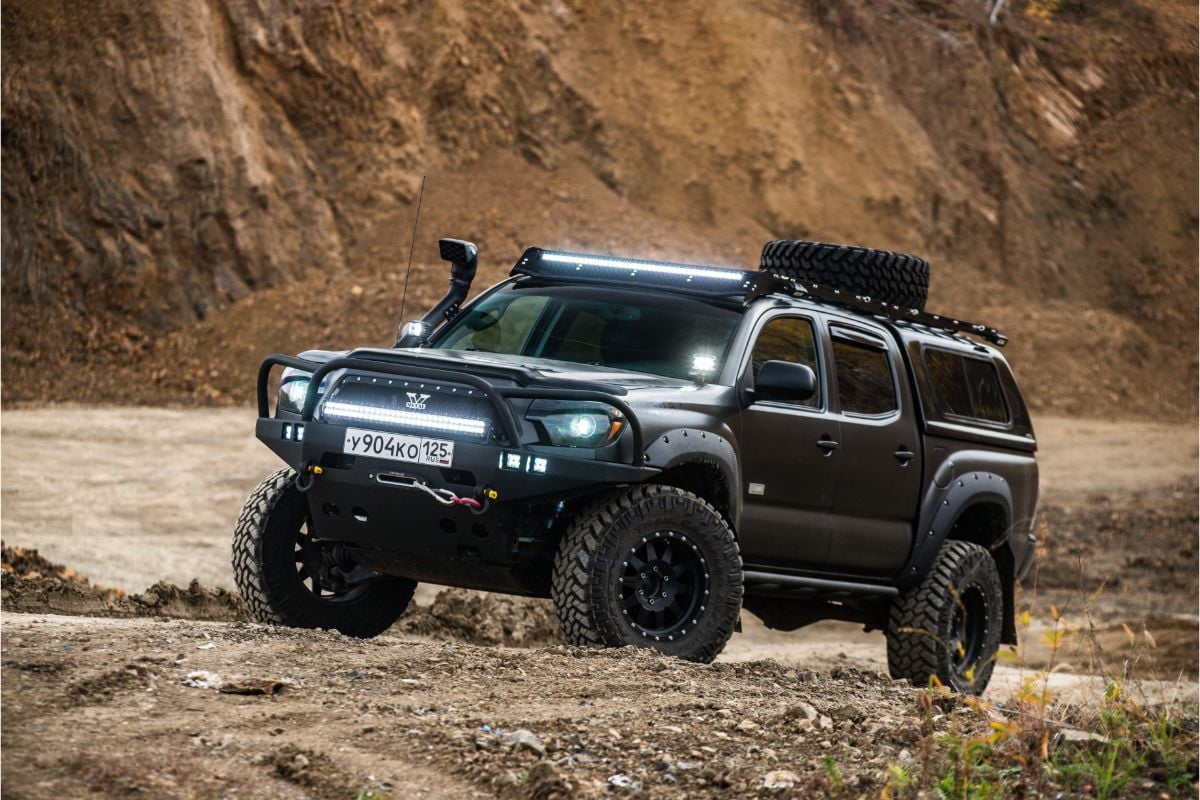 Despite these two trucks matching up head to head, the Tundra tramps the Tacoma when it comes to off-road performance. Although the Tacoma is installed with some technology to assist it, the version that can match up with the Tundra is only the Tacoma TRD Off-Road Edition.

The Tacoma has the Hill Start Assist Control and Crawl Control. Crawl control assists the Tacoma by driving at slow speeds automatically in demanding terrains controlling acceleration and braking. The driver is left only to take care of the steering.

Toyota Tacoma TRD Off-Road also has a Multi-Terrain Select system. The system allows you to select from five different driving modes depending on your driving conditions. In addition, you can select a driving mode more suitable to improve your driving experience by pressing a button.

As initially mentioned, the two trucks share an infotainment system. In addition, they have a touchscreen with CarPlay, Android Auto, Amazon Alexa, and Bluetooth connectivity.

They also have noise cancellation within them and a cab-to-bed seal that prevents noise from the bed from seeping into the cab.

They share other outstanding features, including power door locks, windows, and mirrors. But there is quite a difference in the space inside the cabs.

The difference between a Tundra’s and Tacoma’s legroom means that with a Tundra, one can travel seated in the back for long distances very comfortably, but if in a Tacoma, it has to be just a few minutes’ride.

In addition, the Tundra can accommodate five adults while the Tacoma has to settle for one less person. 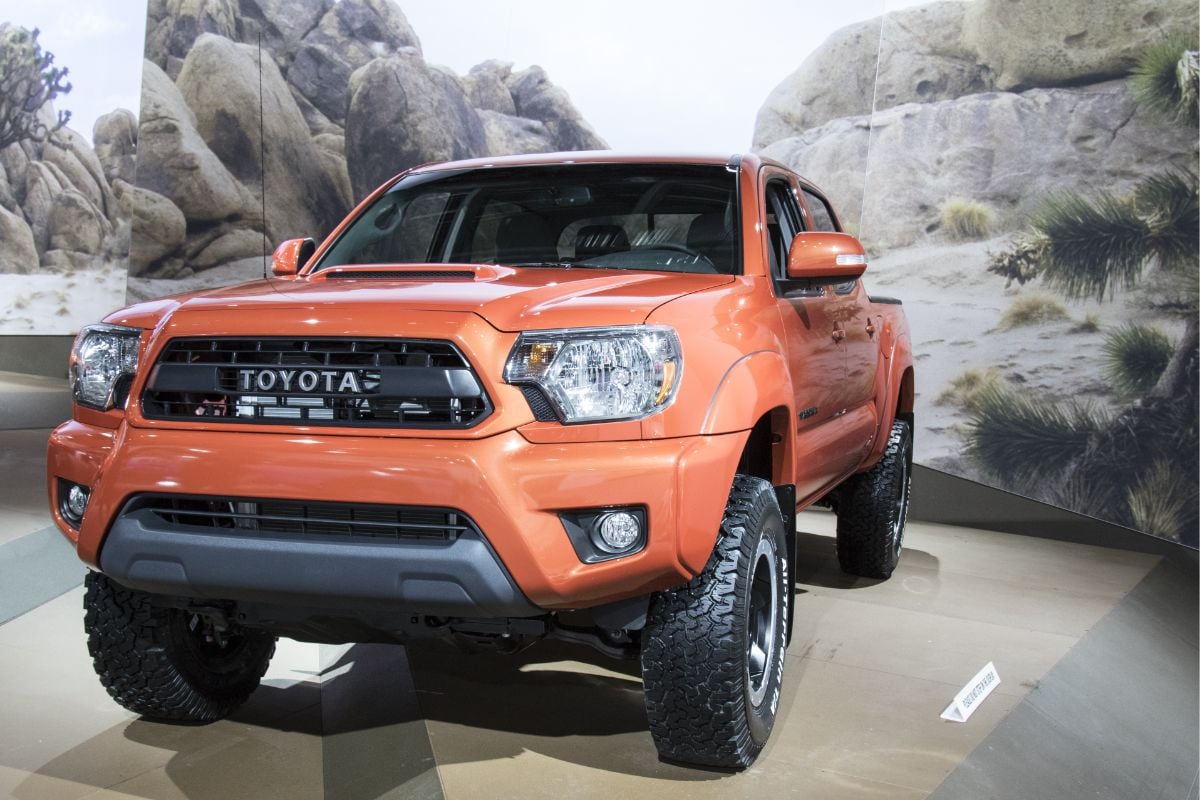 Both trucks score highly on safety as rated by the NHTSA and the IIHS, but the Tundra has more standard active safety and driver assistance features.

In addition to a rearview camera, Tundra has the Toyota Safety Sense P, which is a system that entails lane departure warning, pedestrian detection, adaptive cruise control, rear cross-traffic alert, and automatic high beams. The vehicle also has eight airbags.

On the other hand, Tacoma also has the Toyota Safety Sense system, which only entails lane departure warning, automatic emergency braking, and adaptive cruise control.

Both pickup trucks are very durable. When well maintained, a Toyota Tacoma can achieve 200,000 miles. On the other hand, the Tundra has a lifespan of 250,000 miles.

The Tundra is more versatile due to its ability to offer comfort, luxury, off-road performance, and towing capabilities.

But both trucks can serve you well, whether you need a truck to use for commuting to work or a towing machine with excellent off-road abilities.