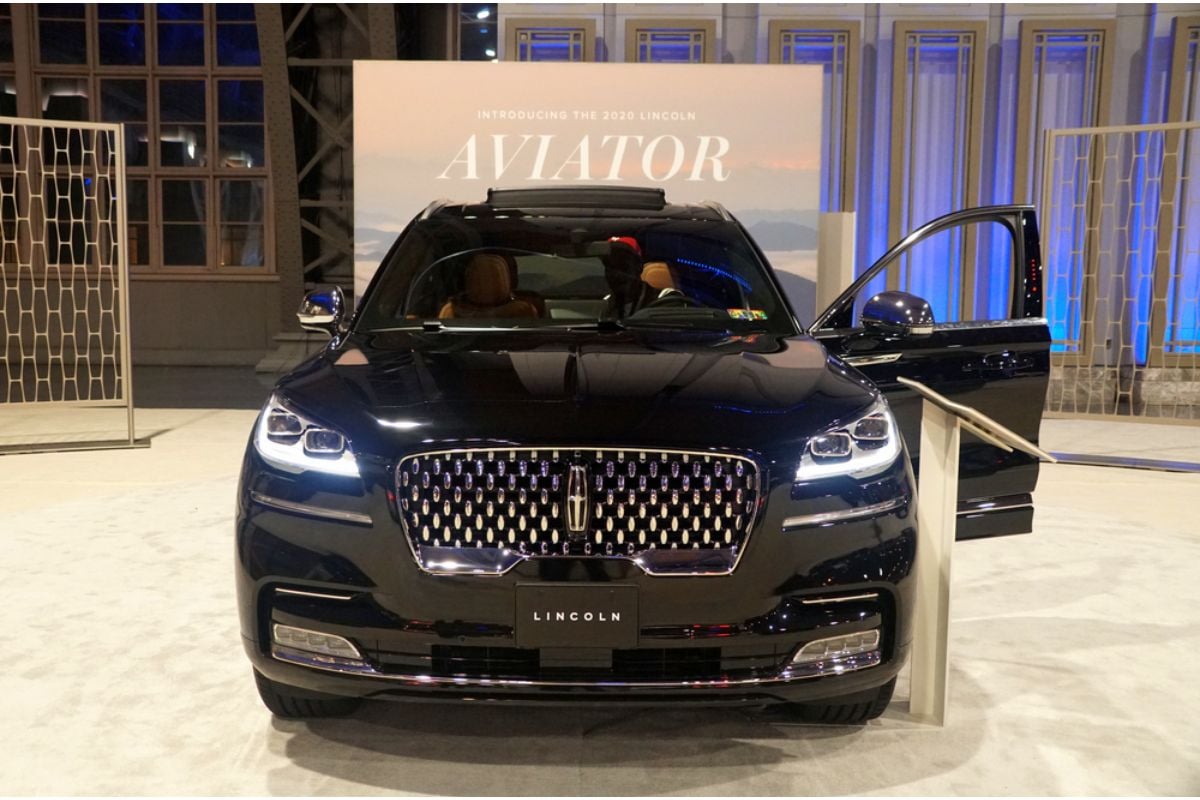 There’s nothing like some great comparison shopping to get you in the mode for an upgrade. For the astute shopper, there’s a lot of strategy that goes into car buying. Perhaps the most important thing to remember is not to rush yourself into a purcahse.

Evaluating what’s a priority for you and your family can make a massive difference in what you end up choosing. Not comparing could have you end up with something that doesn’t suit the needs of all parties involved.

We’re here to help! Before we give you some solid choices that are similar to the Lincoln Aviator, we’re going to tell you which ones were standouts and why. Then, you can use that information to help yourself make an educated decision on which one fits your situation best.

The top favorite is the Kia Telluride. It is the most budget-friendly option without losing the essence of what makes the Aviator a good choice. They share a fuel economy and are quite roomy inside. The Telluride is so roomy, in fact, that it has space for eight.

The second pick is the Ford Explorer, which also sports a reasonable price. It has the highest fuel economy and has room for seven passengers. It also tows the most of the three, with a total tow compacity at 5,600 lbs.

Lastly, the Volvo XC90 was chosen due to the 30 mph highway miles. When it comes to things like road trips, that can come in handy. Even though this is the most expensive of the other two favorites, it still comes in under the price of an Aviator.

At the end of the day, all of these midsize SUVs are most commonly used for families. These vehicles don’t need to be the fastest cars on the block, nor do they need the most horsepower.

What’s usually of the utmost importance is how safe they are and fun things like being able to tow things for adventures.

A Peek Into a Lincoln Aviator 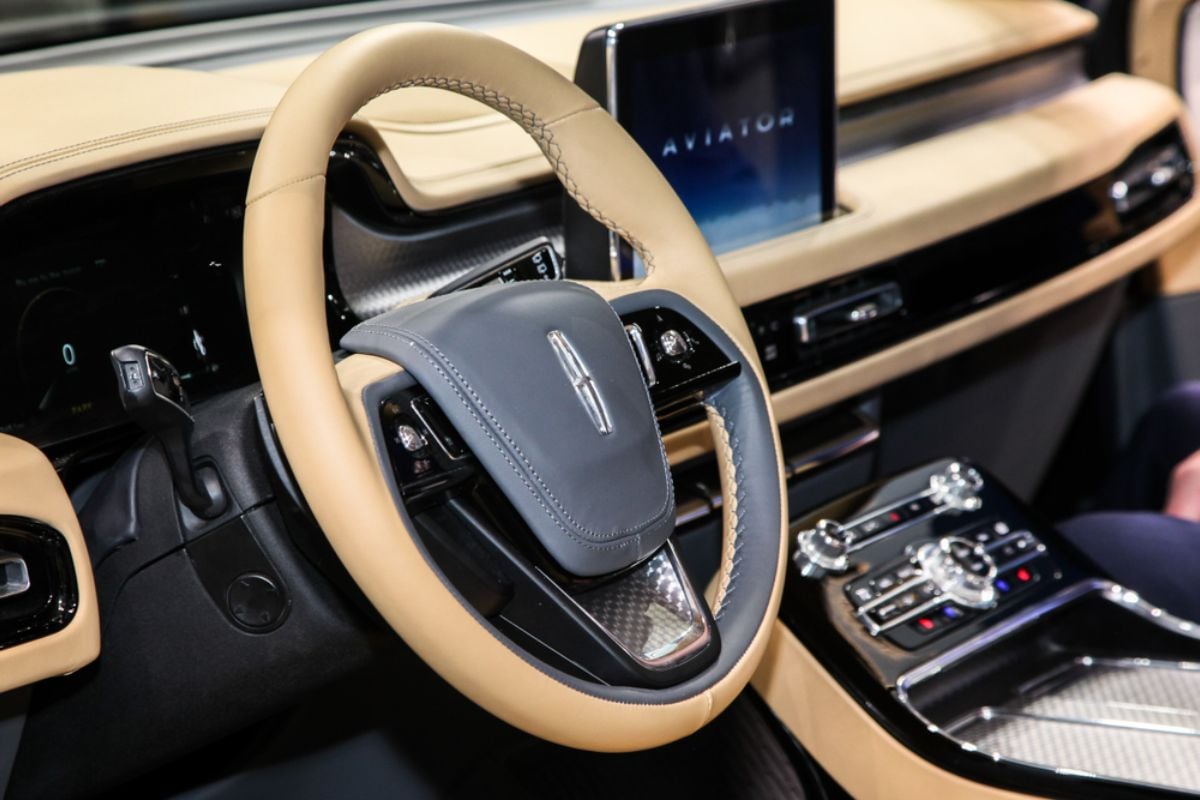 Lincoln’s Aviator first hit the scene in 2002 and was on the market through the 05 model. Lincoln took a break and didn’t start producing Aviators again until 2019.

Since then, the Aviator has stood against other midsize luxury SUVs as ahead of its class. With enough room to comfortably seat seven and up to 494 horsepower, Lincoln’s SUV has proven to be a powerful vehicle with all the amenities you’d expect and more.

Towing capacity for the midsize SUV is up to 6,700 lbs. If you’re interested in taking one home, there are seven trims to choose from and you can expect to pay an average of $53,000.

If you really like the sound of this SUV but would like some comparisons, we’ve got 12 cars similar to the Lincoln Aviator for you to check out! 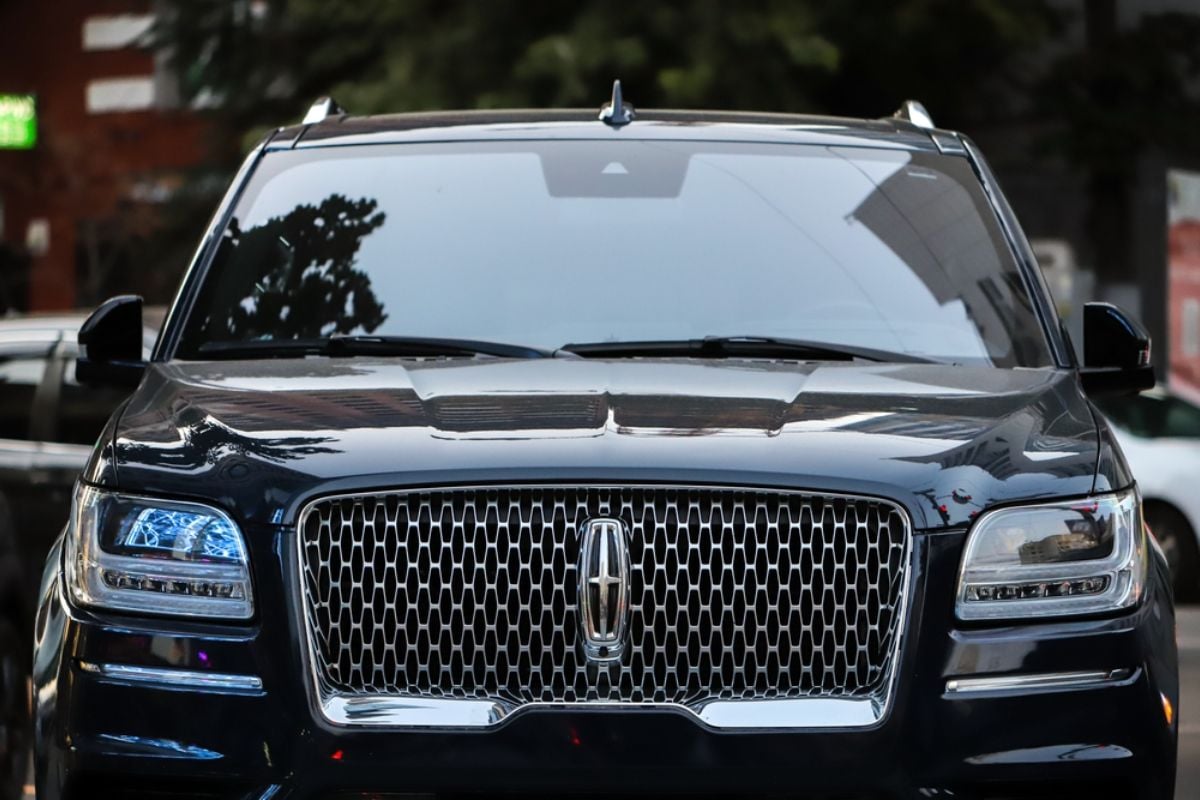 Let’s get started with Aviator’s older brother, the Lincoln Navigator. They have a lot in common, but it seems in a handful of categories that the Navigator has just a little bit more.

For example, you can seat eight, there’s 440 hp, and towing capacity is up to 8,300 lbs. That makes sense, though, since it is a heftier vehicle.

That’s why the Navigator gets less mpg, coming in at 17 in the city and 23 on the highway. It also has a lot to do with only getting up to 100 mph. 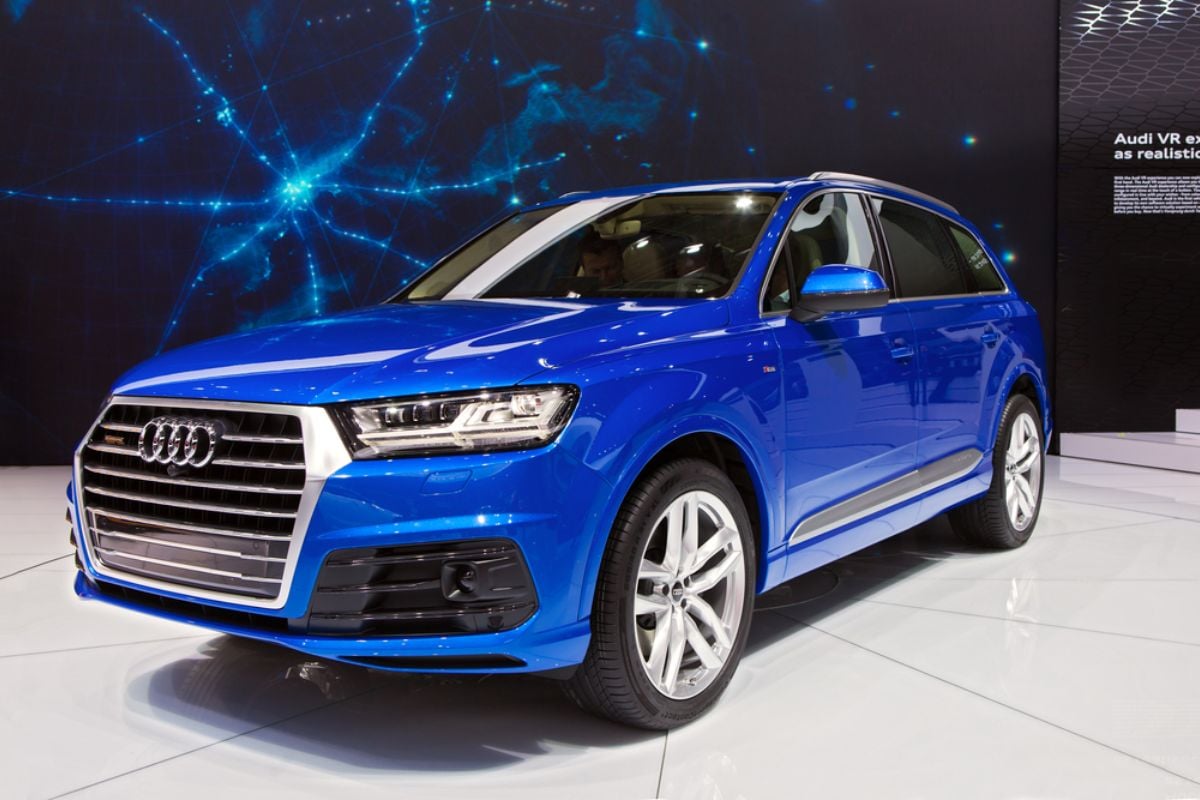 For an SUV that’s bigger than the Aviator, you would think that most of the qualities would be more similar to the Navigator.

But it kind of stands alone with attributes such as less hp at 248 and a top speed of 130 mph. Like the Aviator, there are seven seats available. 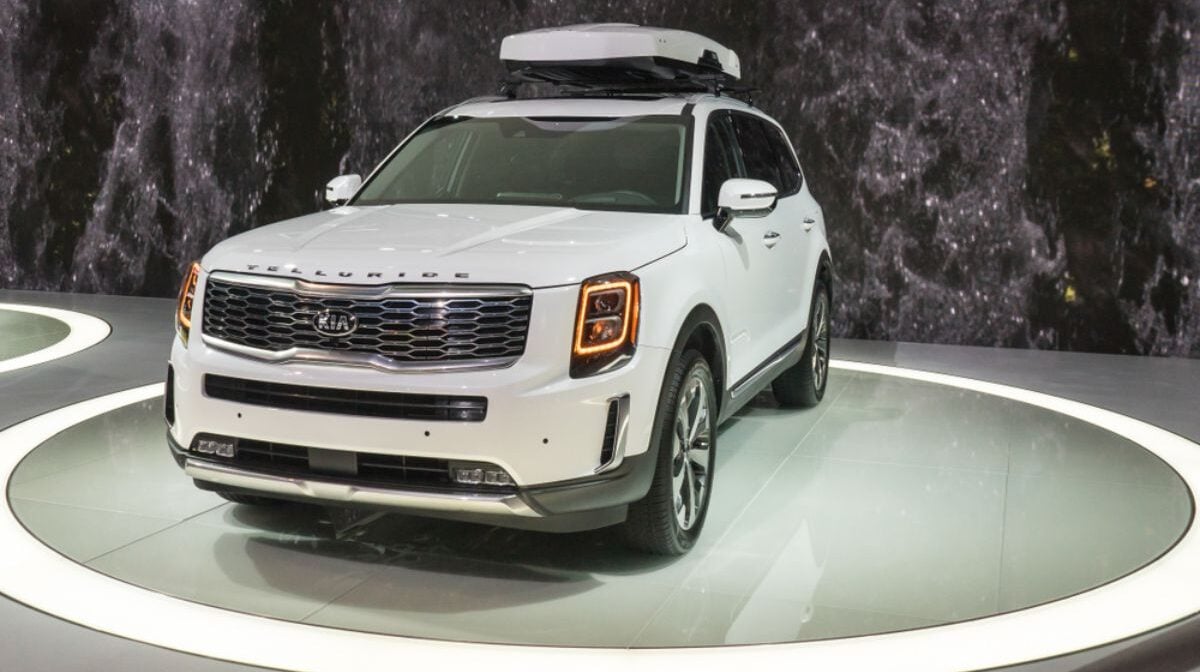 The Telluride has bigger shoulders than the Aviator does. That’s why it fits an extra person. Surprisingly, it does have better gas mileage with 19 mpg city and 26 mpg highway.

With less horsepower comes less hauling power, which is why Telluride’s capacity is the lowest at 5,000 lbs. This is, however, the most budget-friendly of the SUVs. A new Telluride comes in at just over $33,000. 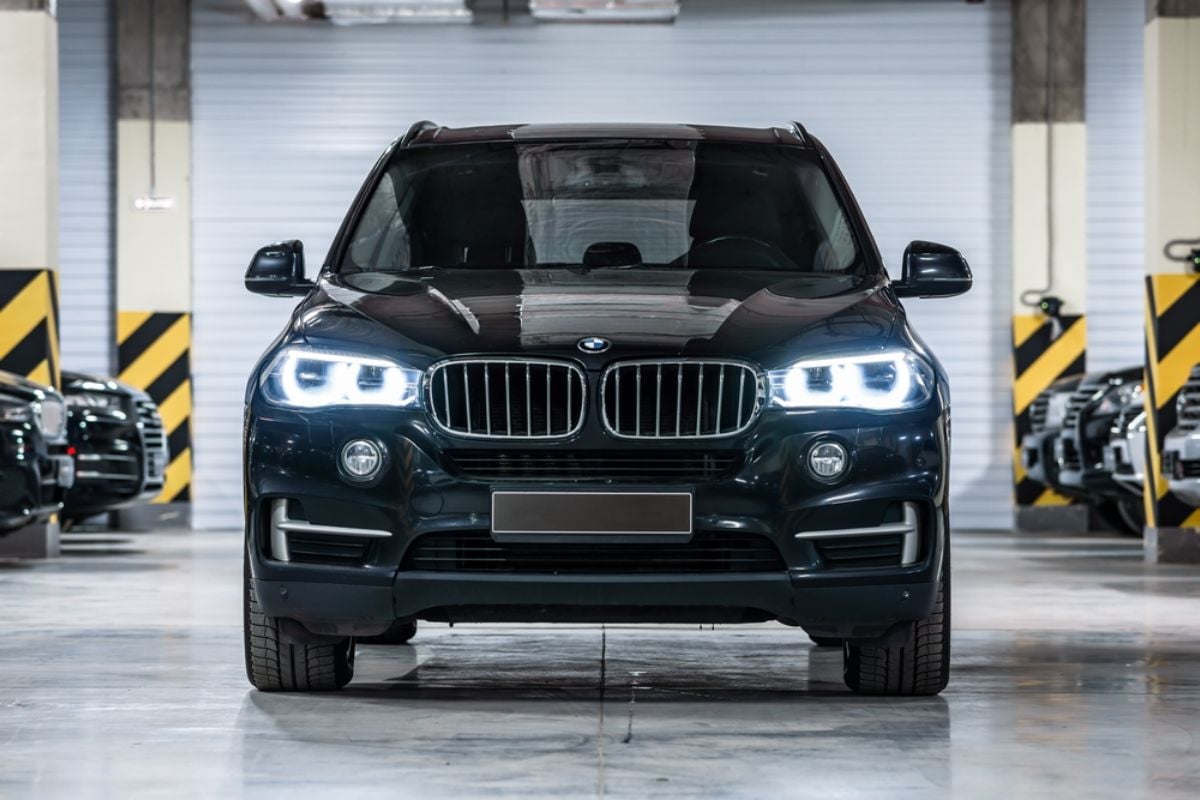 Maybe it’s because the brand is so hotly sought after, they know people will buy a BMW no matter what. So, trying to get better mpg wasn’t a priority with the X5.

This model has one of the lowest on the list, 13 mpg in the city and 26 mpg on the highway. Neither was seating capacity, which caps out at five.

With the seats they saved, you’d think they could have put that in achieving a mph similar to the Aviator, but the X5 tops out at 155  mph. It is faster, however, making it to 60 mph in 4.1 seconds. 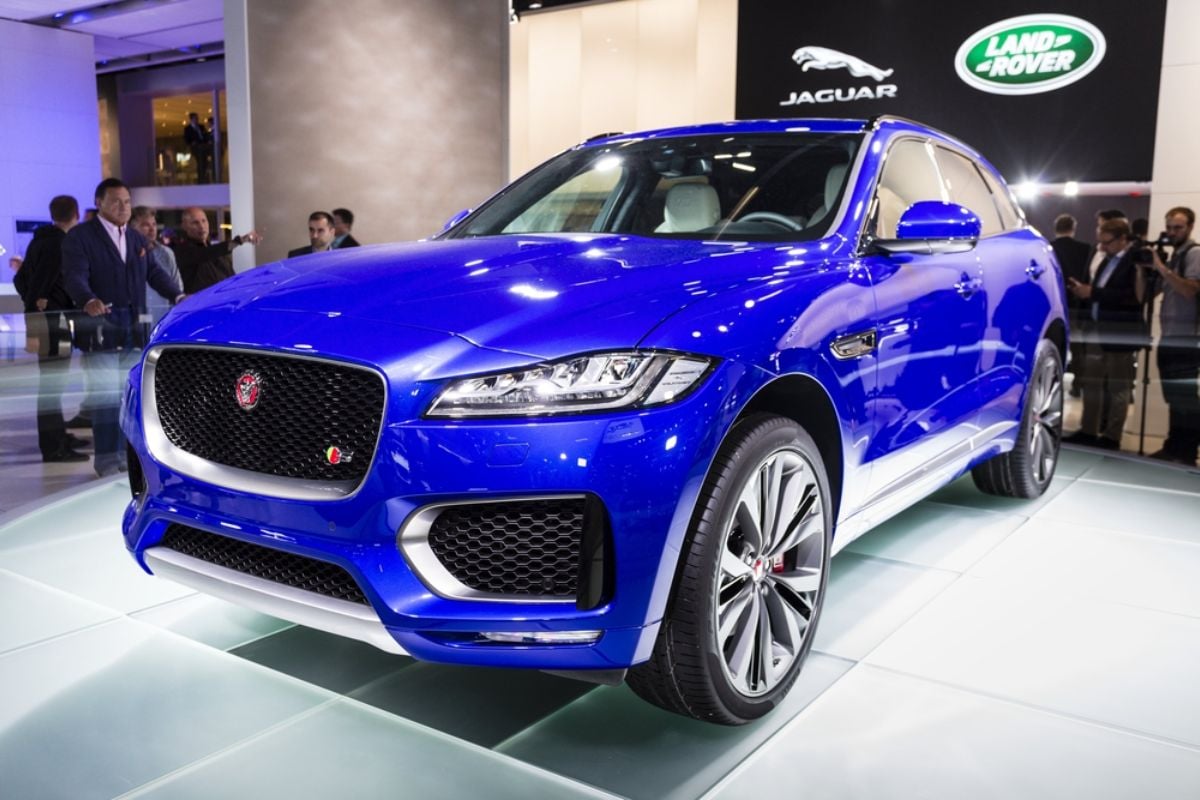 The F-Pace has a more similar appearance to the Aviator in comparison with some of the other SUVs. Aside from that and having practically the same mpg, the similarities pretty much stop there.

Similar to high-end brand BMW. this Jaguar only has room for five inside. It also has a top speed of 135 mph, where it takes 6.9 seconds to get to 60.

There’s about 1,500 lbs less that can be towed by this SUV. The horsepower is greater though at 542. The F-Pace actually costs a little less than the Aviator with a price around $50,000. 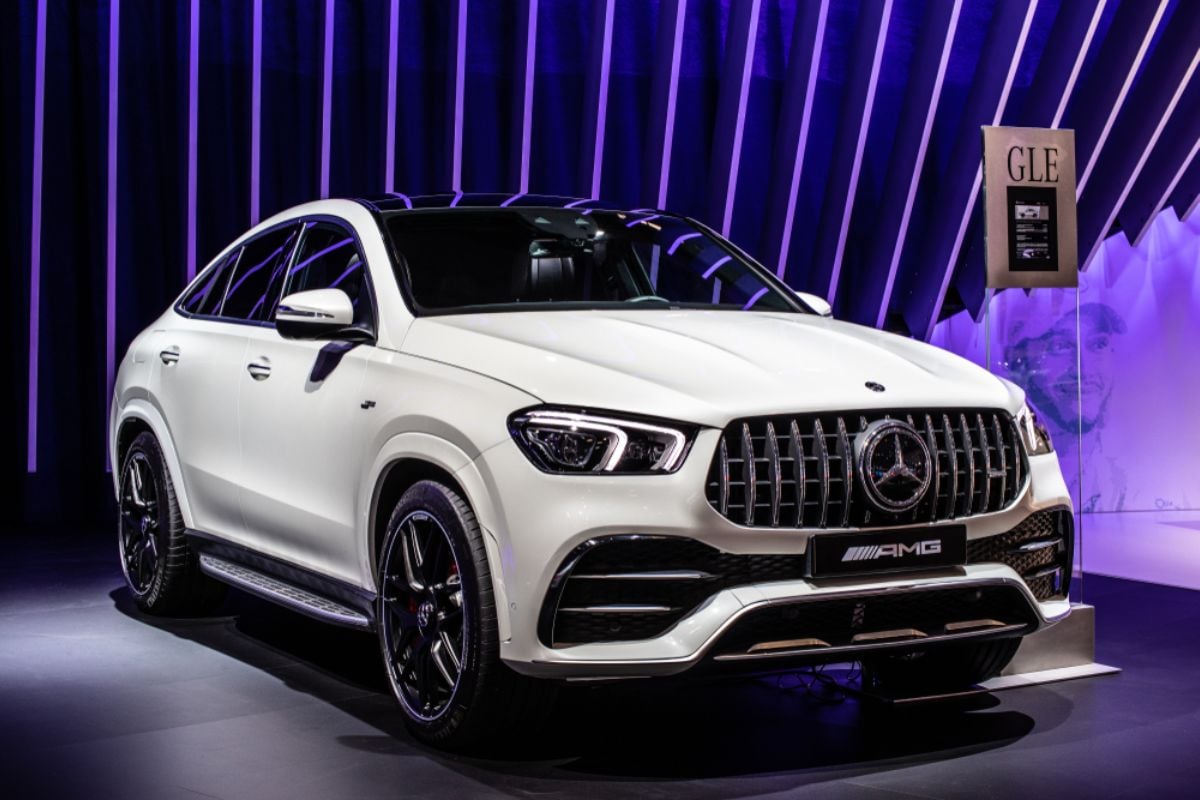 At half the horsepower of the Aviator, the GLE Class has a top speed of 130 mph and can go from 0 to 60 in the same amount of time.

Another point that is the same would be the fuel economy, at 22 mpg combined. However, due to a more bubbly design, there’s only room for five.

Another area where the comparison differs is towing capacity. This Mercedes can pull about 1,000 lbs more. The cost is on par with the Lincoln in question. Pricing for the GLE Class starts at $56,150. 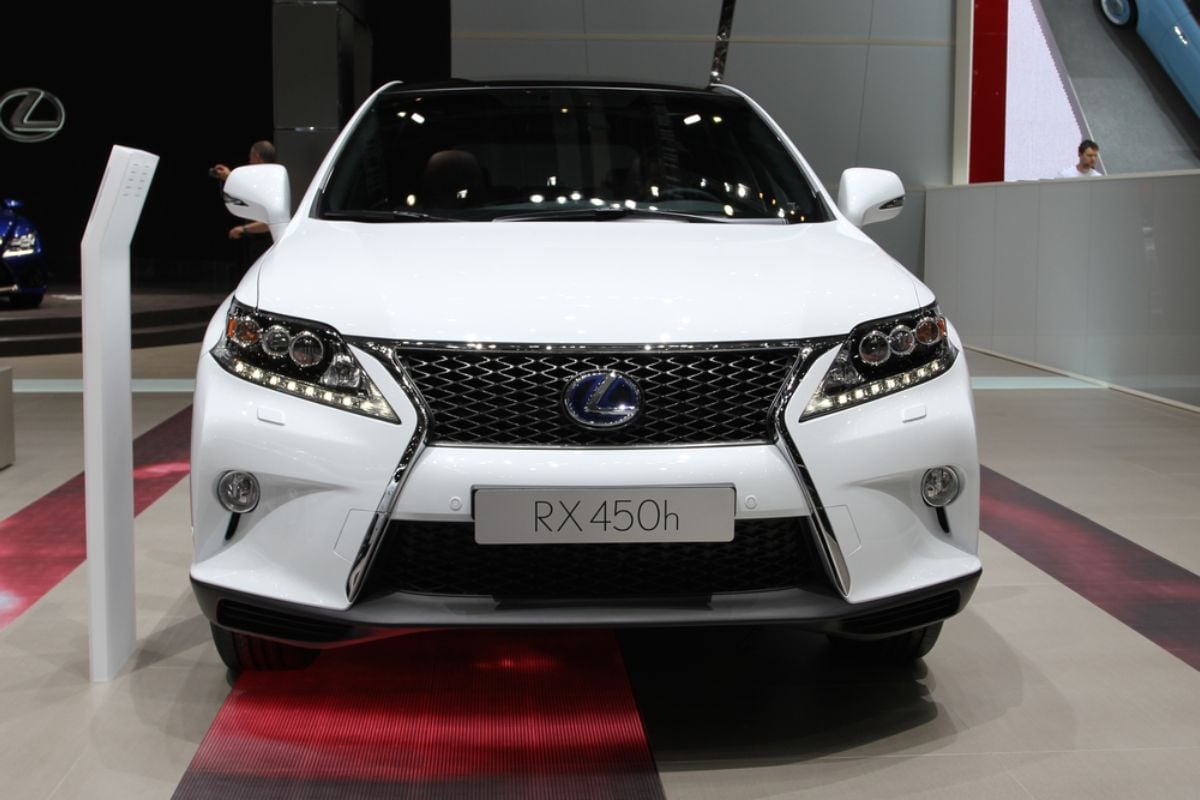 A more edgier SUV, the RX 450h, has the highest fuel economy on the list, coming in at 29 mph in the city and 28 on the highway. In contrast, this Lexus has the slowest 0 to 60 speed, 7.7 seconds with a top speed of 124 mph. But now we’re back to vehicles big enough on the inside for seven people to go for a ride.

Surprisingly, only 3,500 lbs can be towed, the smallest towing capacity we’ve seen so far. The RX isn’t the lowest in horsepower, though. This SUV is above several other selections with 308 hp. The price is actually the same as the Aviator. 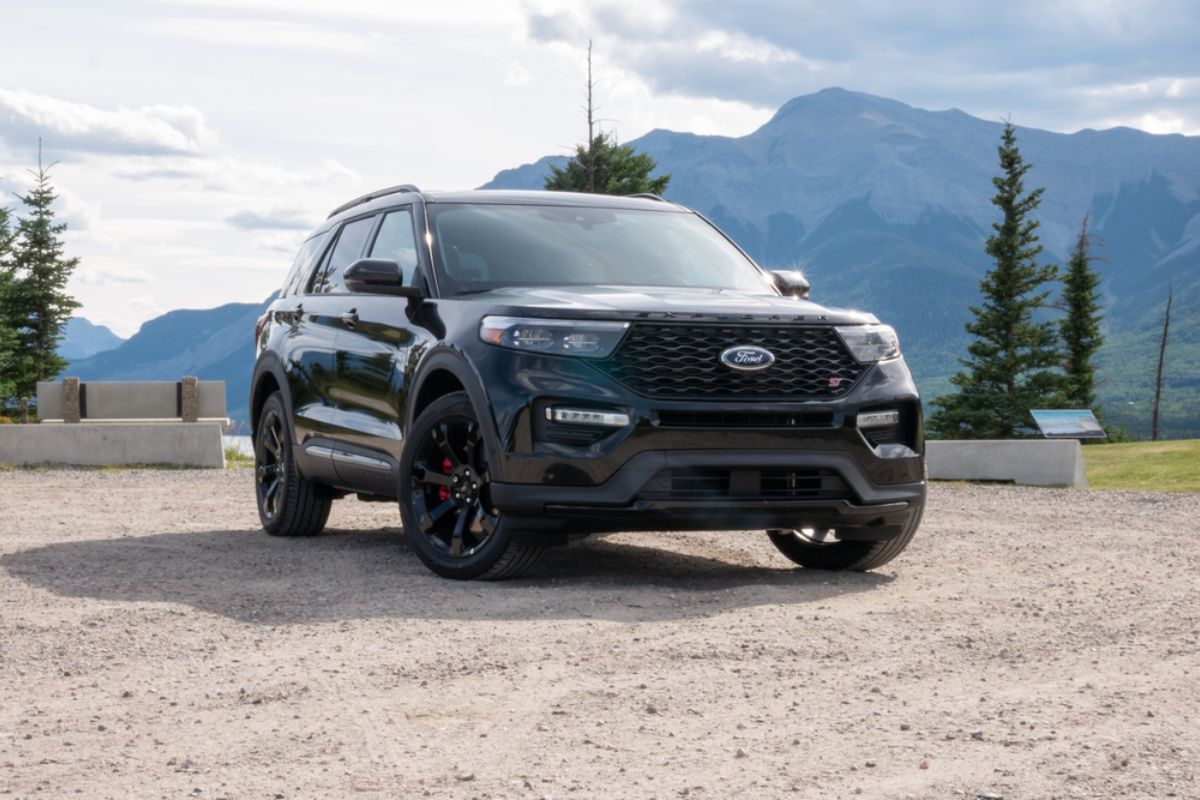 Looks can be deceiving. The bulky Explorer also beats out the Aviator and ties with the RX 450h for best fuel economy. We also continue the trend of seating seven. An Explorer can haul up to 5,600 lbs. Using 400 hp, the Ford can go from 0 to 60 in 6.9 seconds and up to 143 mph.

Similar to Telluride pricing, the Explorer is available for $34,000. 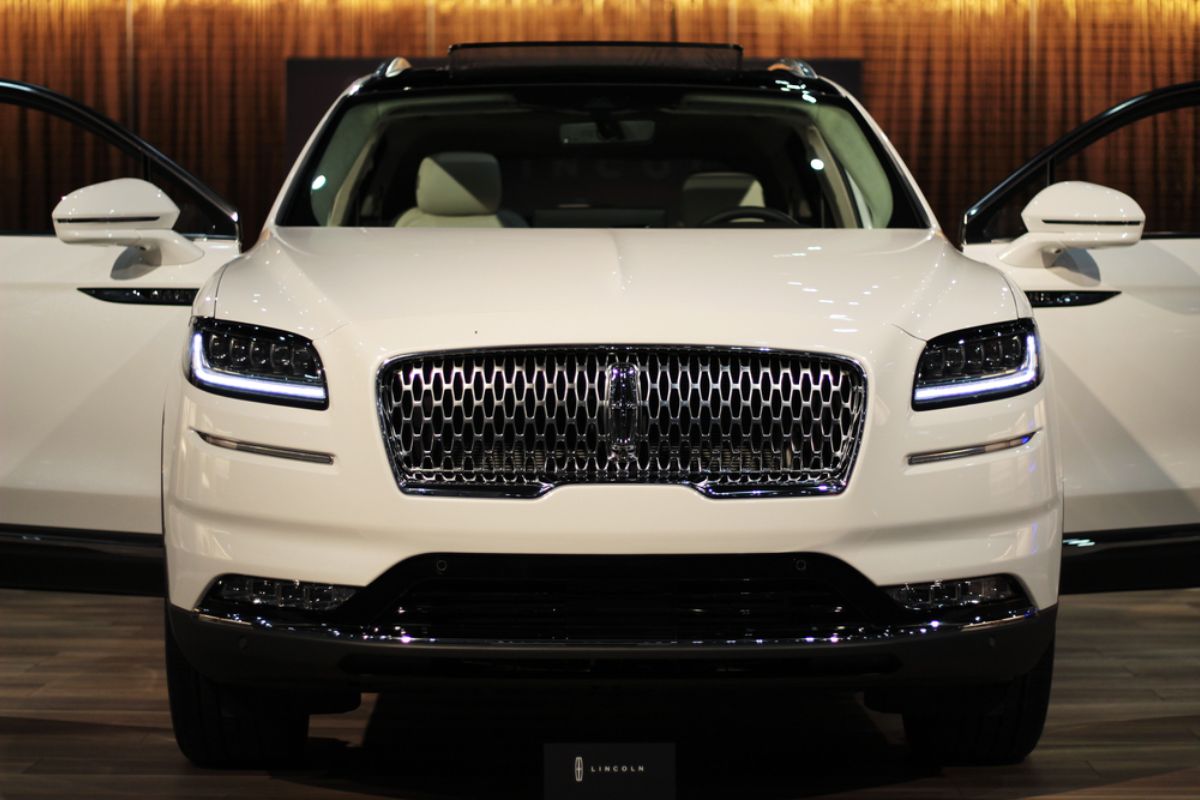 There are some differences here between this SUV and the other Lincoln we’re comparing everything to. First, the towing is almost half as much, around 3,500 lbs. Then, the combined mpg is better at 23.5 mpg.

It takes the Nautilus 7 seconds to hit 60 mph and has a top speed of 138 mph with 335 hp. There’s also only room for five. Basically, this Lincoln is like the Aviator’s little brother.

Despite what isn’t similar, looking at the two from the outside, you can see how they are related.  Both vehicles definitely have that Lincoln feel.

Still, with all the things the two don’t have in common, it’s not surprising that the Nautilus comes in under the Aviator at $44,090. 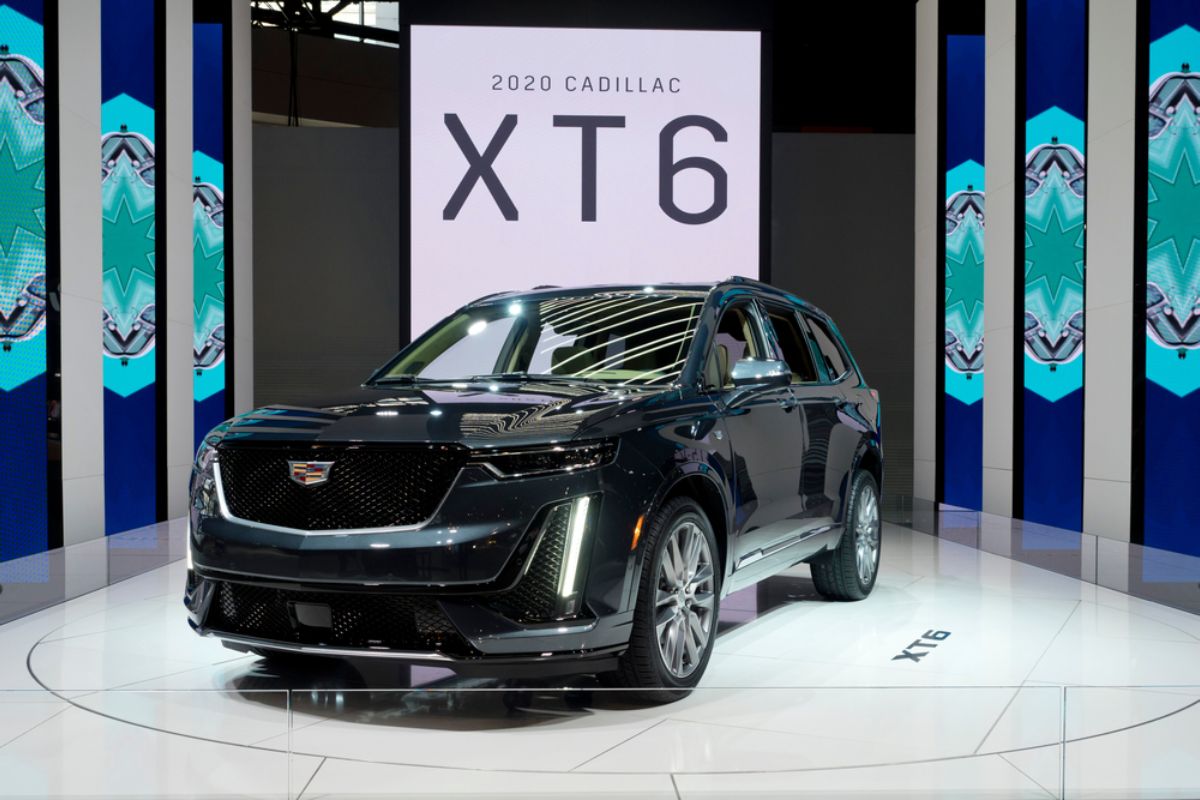 Another midsize SUV with seven seats is a great way to start a comparison. However, the specs vary wildly from here. With that much of a package, there’s only enough giddy up and go to tow around 1,000 lbs. While they have the same highway mpg, the Cadillac gets three more miles to the gallon when driving locally around town. 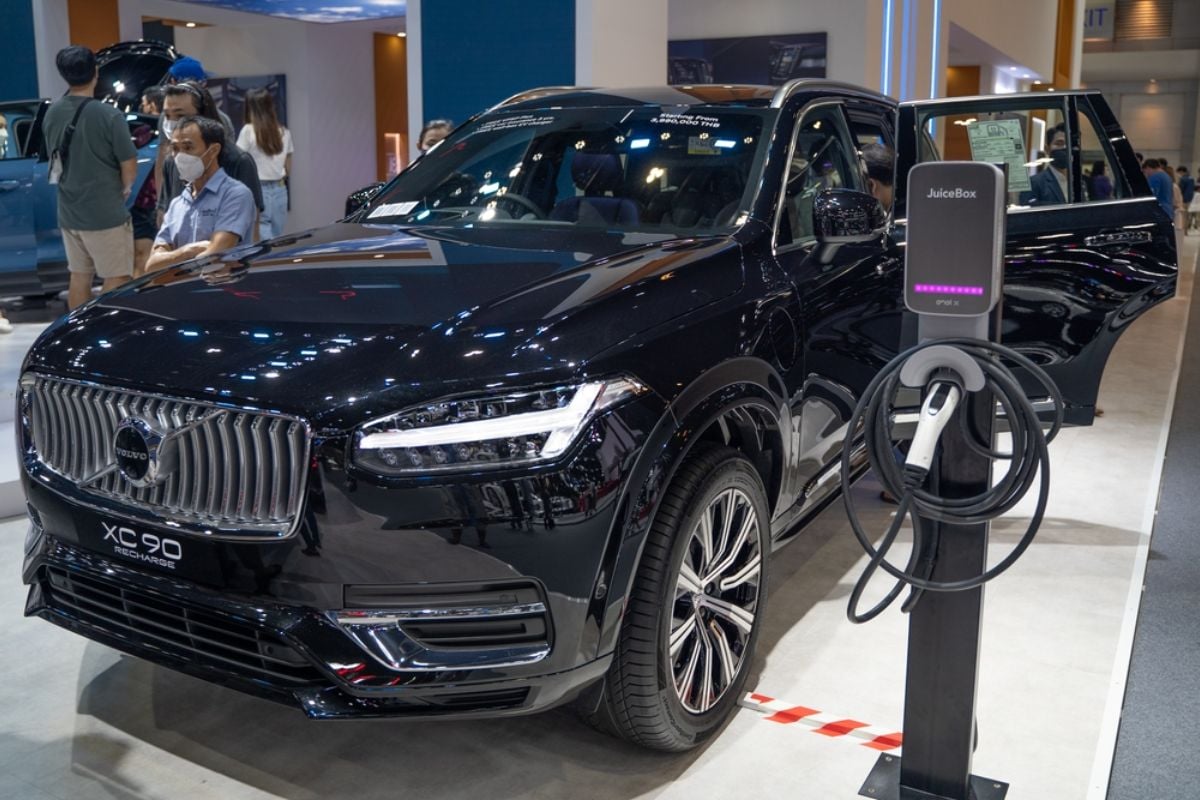 30 mpg is the highest for the highway miles on the list. Unfortunately, the combined drops in comparison to the other two that tied for highest fuel economy because the city drags it down at 21 mpg. It’s still higher than the Aviator, though. On par though, a third row makes way for seven passengers. 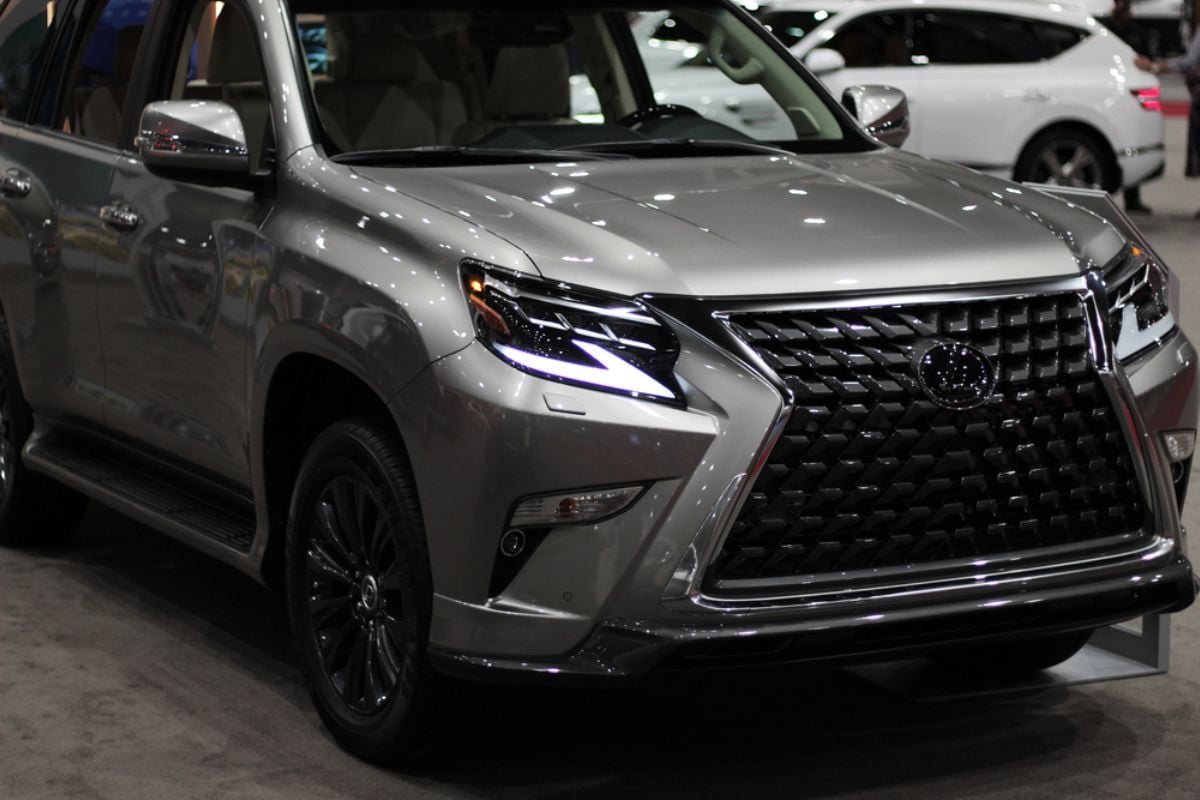 Still, like the Aviator, there’s room for seven. You can take one home for around $56,000.

Is Lincoln going to stop production on the Aviator again?

With improving sales since the relaunch of this model, there are no current plans for putting the breaks on the Aviator any time soon. The only thing that’s stopping is the Slate interior trim has been slated to be discontinued.

Otherwise, there’s nothing but productive changes in store for the SUV. Things such as wireless charging, the head-up display, and phone key function are standard on the Aviator units going forward.

When will the new model year be going into production?

New Lincoln Aviators will start being framed together by the end of May. You can expect to start seeing what the new year has in store and go for a test drive in the fall.

There will be a tad bit of a facelift but many of the things you love about the current Lincoln Aviator will be carried over into the new model year.

An anticipated update will be the introduction of the Jet Package. That basically entails 22 inch black aluminum wheels, door and fender badges, mirror skull caps, roof rails, a black front grille, and several other body details. Be on the lookout for future plans that include all-electric Aviators.

How long are Lincoln Aviators expected to last? 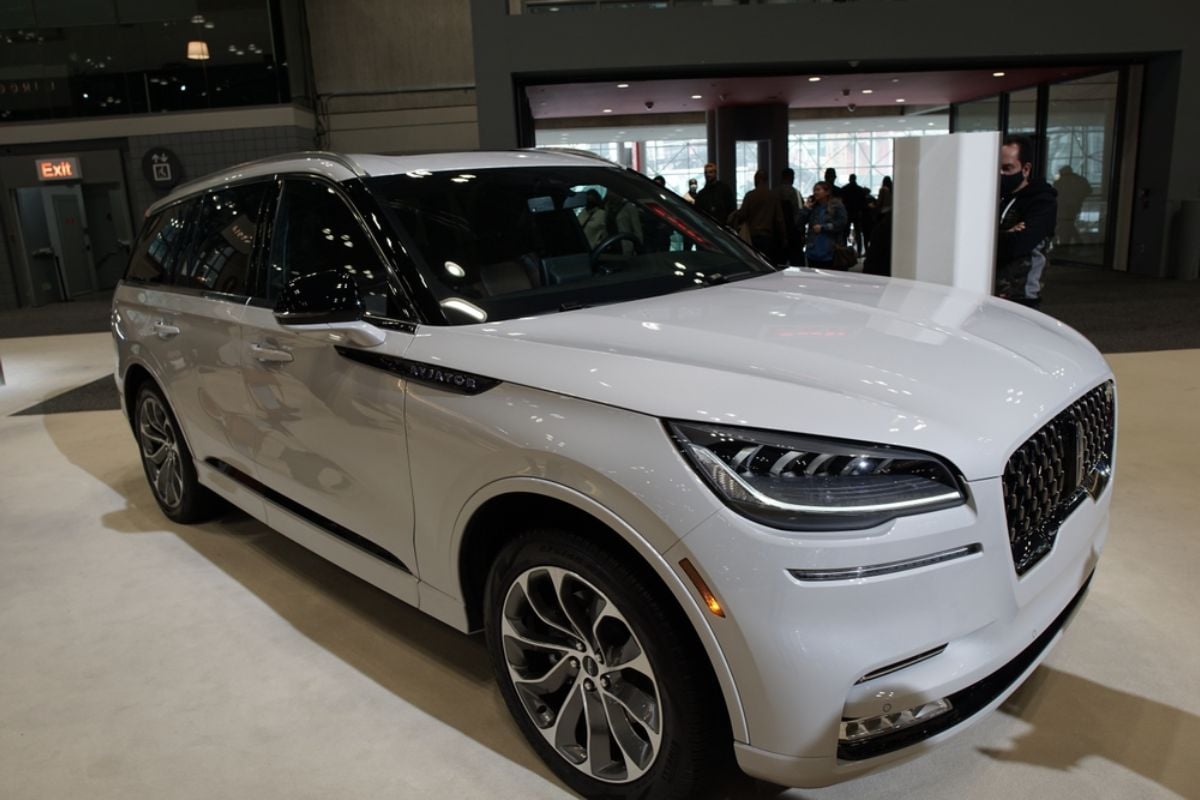 As with any vehicle, the duration has a lot to do with upkeep. If you’re pretty cognizant of maintenance needs and do your best to stay on top of it, you can expect to keep your Aviator running up to 250,000 miles. Depending on driving habits, that could take you an estimated 15 years into the future.

When you buy any car, it’s an investment. As with any investment, you can only hope for the best. You could keep the car in immaculate shape for five years straight but then get in an accident and the car is totaled. You never know for sure but that is what you can look forward to under the best conditions.

Security features such as automatic emergency braking and blind-spot monitors mean that Lincoln is doing what it can to keep everyone aboard safe.

As technology in regards to safety evolves, the Aviator is getting updates implemented. There are a lot of advantages to buying a Lincoln for this reason.

At the dealership, a salesperson can go over the long list of safety features that will empower you to give a sigh of relief when you pack your family inside. Other features include, but are not limited to: