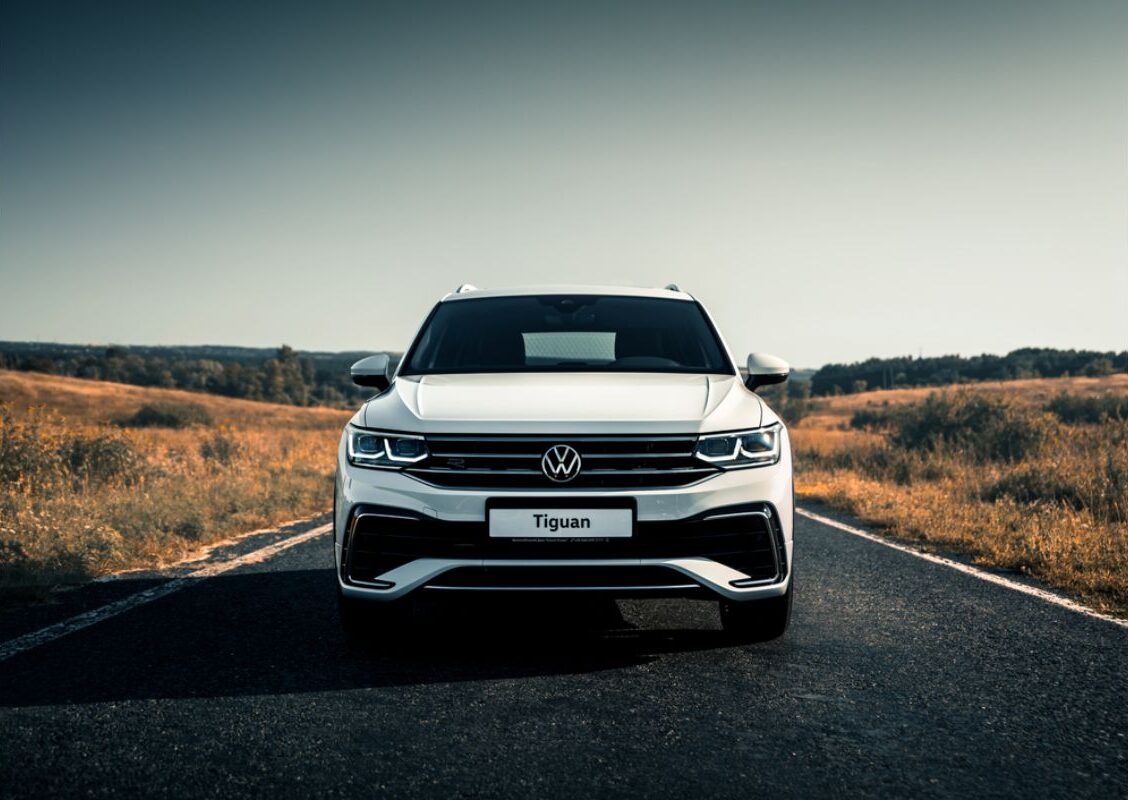 For anyone considering the VW Tiguan, the good news (or maybe bad news if you’re indecisive) is that there are plenty of options for smaller and compact SUVs.

This is a new segment that’s evolved along with crossover cars for single professionals or small families who don’t want a sedan, but aren’t in need of a large or even midsize SUV. Small SUVs are also easier to find in a hybrid or electric option.

From the 13 cars on this list, there are three I’d consider to be my favorite alternatives to the VW Tiguan: The Hyundai Tucson Hybrid, the Bronco Sport, and the Mazda CX-5. You’ll have to keep reading to learn why! 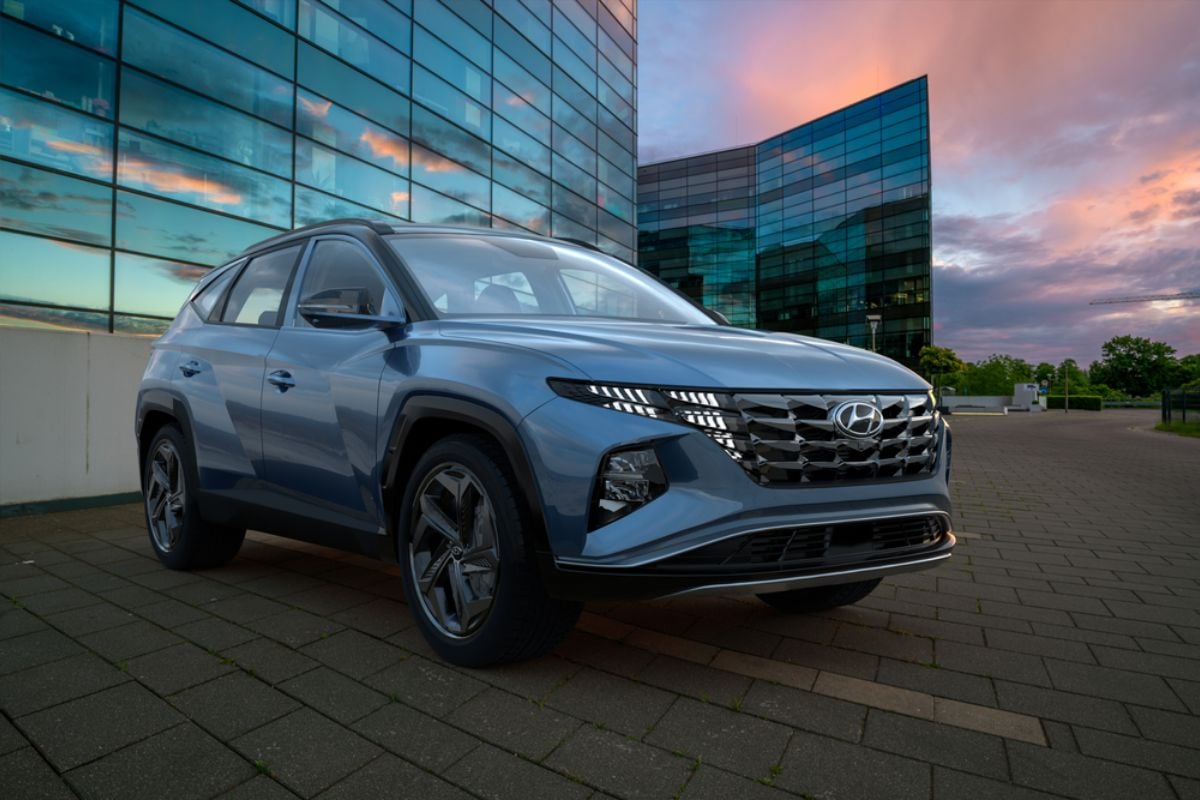 The 2022 Hyundai Tucson Hybrid is completely redesigned, with the hybrid option being a new feature this year. It comes in three trim models, with the most inexpensive one starting at $29,750 MSRP.

The top-of-the-line Limited trim starts at $38,050 MSRP. It is similar to the VW Tiguan because of the 5-passenger configuration and the drive of the car.

I am especially a fan of the gunmetal gray grill option, different from a lot of the chrome designs you see nowadays. It has a super sporty look, and the dramatic lines on the hood make a bold statement.

The combined hybrid system horsepower is 226 and can go 33 miles on a full charge. This isn’t the most efficient hybrid (I mean you’re not getting 50+ MPG), but for a first go at a hybrid midsize SUV, the Tucson is pretty impressive. 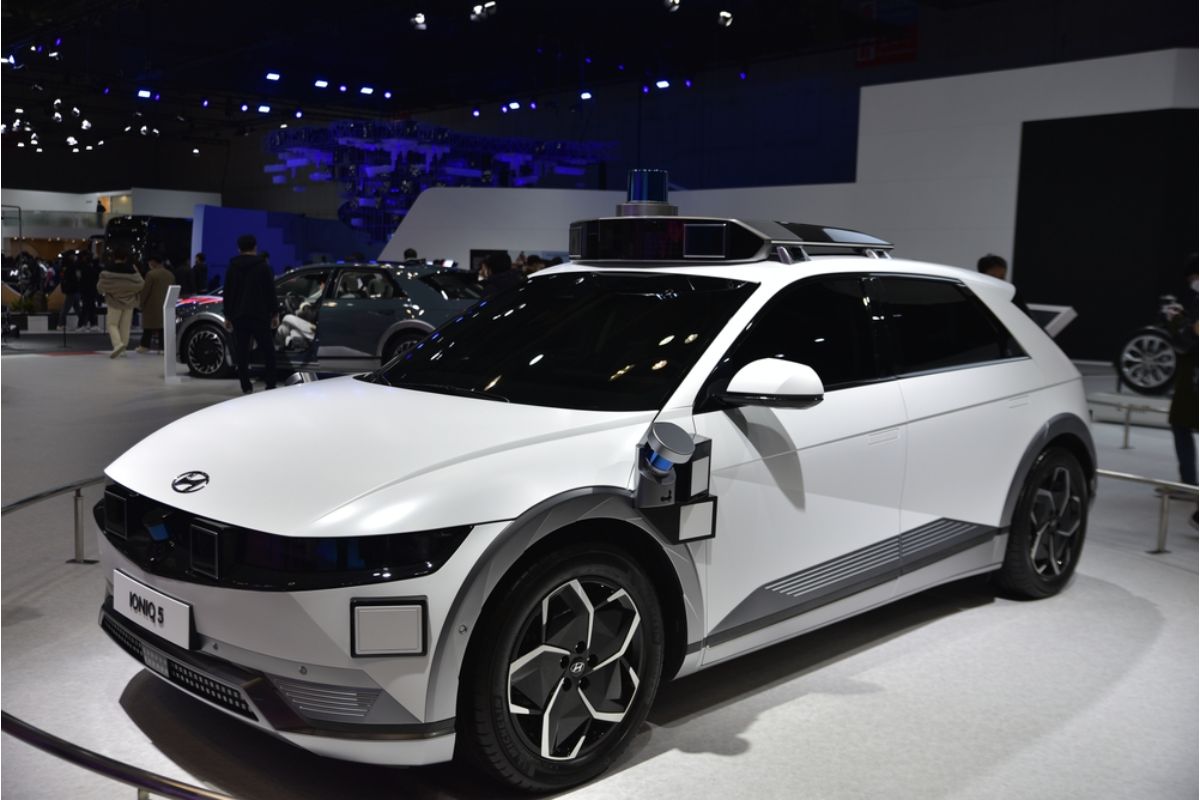 Next on the list is the Hyundai Ioniq 5. It is similar to the Tiguan for the same reasons as the Tucson Hybrid. The only significant difference is that the Ioniq is fully electric. The Ioniq also starts at a higher price point ($43,650+ MSRP). This compact SUV seats five people.

I personally don’t love the style and design of the Ioniq, to be honest. There’s something about it that’s a little too boxy for me. Overall, it reminds me of a more squared-out Audi SUV.

The doors and handles remind me of a Tesla, which is nice. It is very futuristic, so if you’re an early tech adopter, this may be a good option for you. 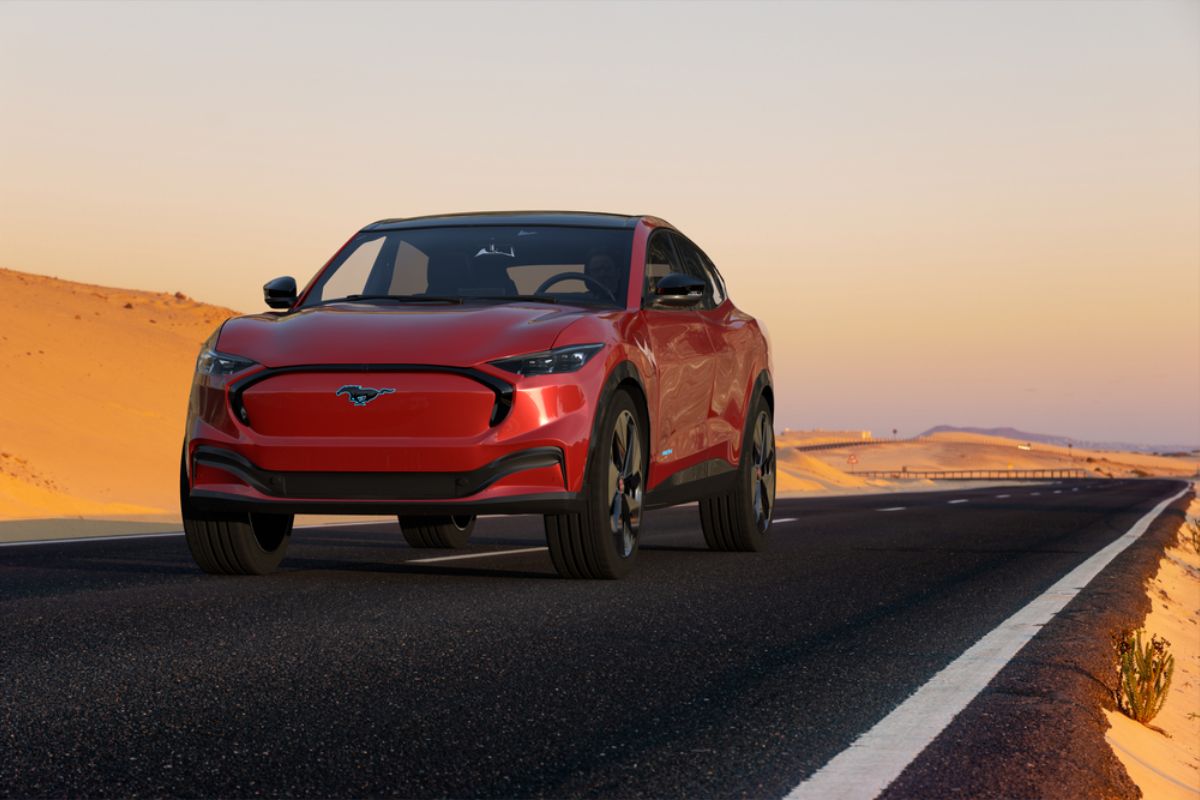 I was recently out to lunch with my sister. We were in the city, and noticed what I knew to be a Mach-E parked on the street. Despite the Mustang logo on the front grill, she was convinced it was a Ferrari (which shows you how much she knows about cars).

When she finally Google-searched a Mach-E, she couldn’t believe her eyes. I realize “Mustang” has a racecar connotation, but the Mach-E model is built more like an SUV. Take a look at its exterior for yourself:

I think this SUV’s design is my favorite of the electric SUVs I’m including on this list. It’s the perfect blend of electric/futuristic and modern/trendy.

Plus, you can’t ignore the fun mustang logo on the trunk. Starting at an MSRP of $43,895, this 5-passenger SUV is more expensive than the Tiguan by a healthy $16,000. So consider yourself warned.

The Ford Mustang Mach-E holds up to its reputation by going from 0 to 60 MPH in just 3.7 seconds, beating the Tesla Y by almost a full second. 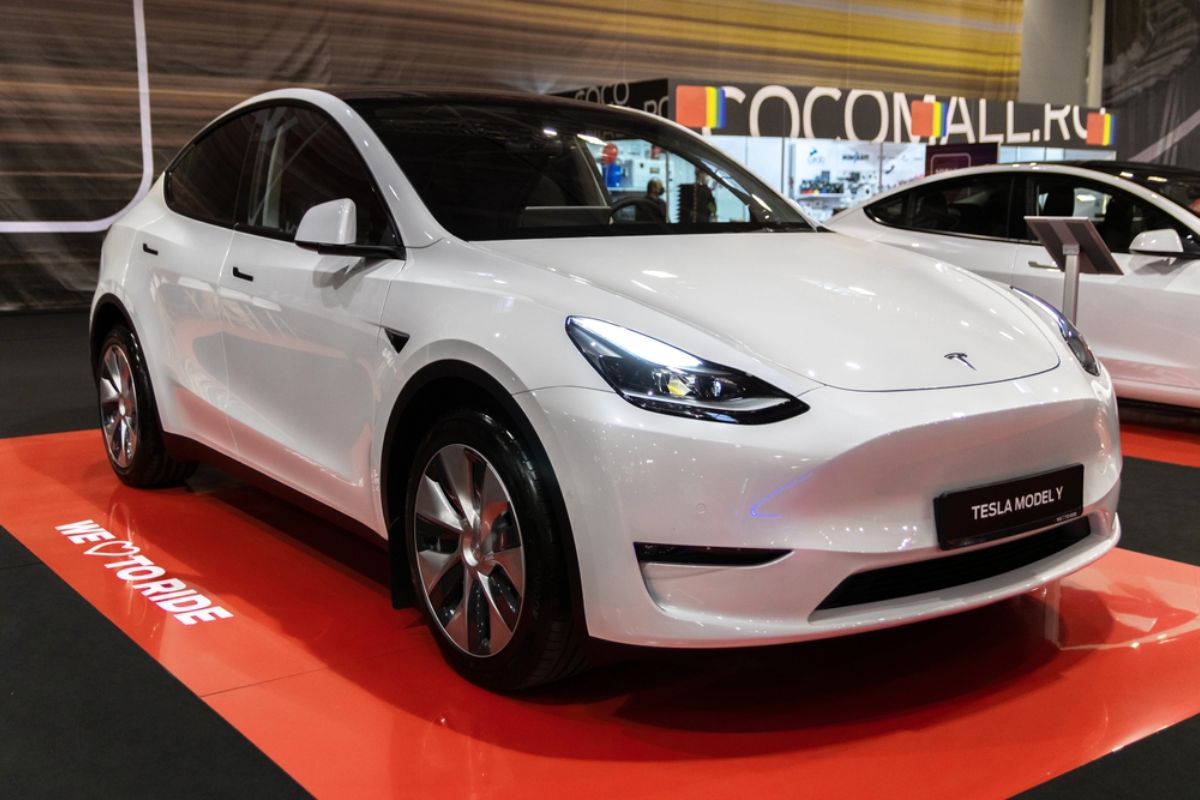 The Tesla Model Y is the SUV option offered by Tesla. The Tesla Y does not look like a Tiguan, but it has three rows and seats 5-7. If you’re looking at a Tesla Y and a Tiguan, you’re probably fine sticking with the 5-passenger configuration in the Tesla.

The Model Y has a charge range of 330 miles and its horsepower is 450. Its entertainment functions are hard to beat, with embedded apps including Hulu, Netflix, and YouTube. It has a substantial towing capacity of 3,500 lbs. 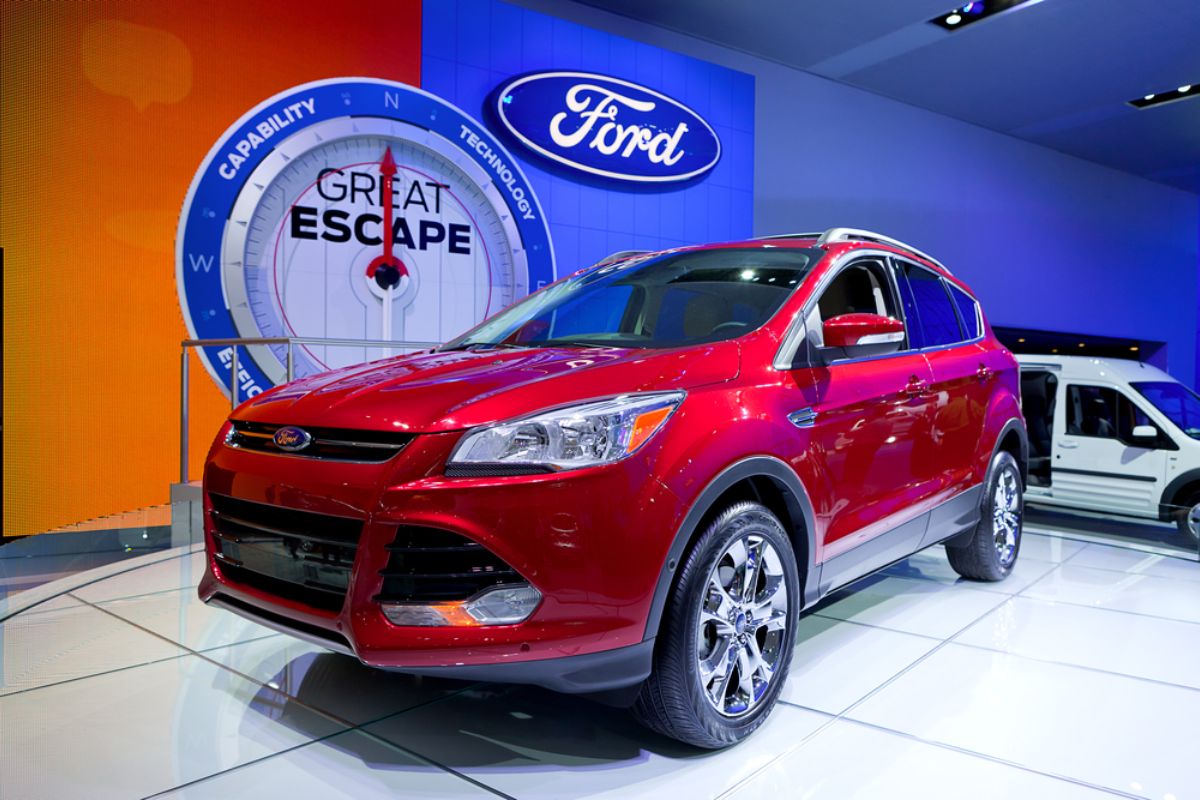 The Ford Escape Hybrid is very similar in size to the Tiguan. It’s slightly more expensive at $30,185 MSRP. Design-wise, from a distance, I’d almost say it has a similar (and obviously less luxurious) look to the Porsche Macan, mostly because of the front and headlights.

The second row’s sliding seats are a fabulous addition, making it easy to reconfigure seating and space as needed, say for a surfing or camping trip. 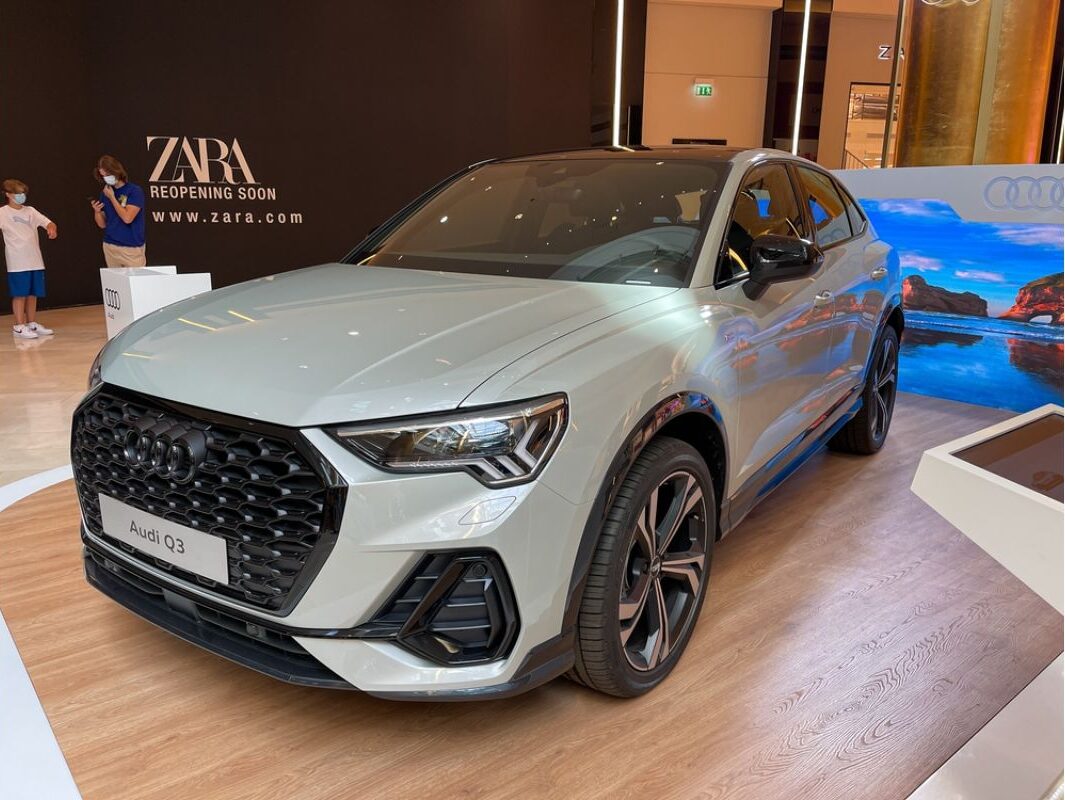 This car is another more luxurious electric/hybrid option (like the Tesla Y). The Audi Q3 starts at $34,900 MSRP, which is surprisingly more affordable than other compact luxury SUVs.

Design-wise, the Q3 is sporty and every bit as sophisticated as other Audi models, and has spacious rear seating. It goes 31 miles on a full charge and gets 30 MPG hwy. It zips to 60 MPH in 8.5 seconds. 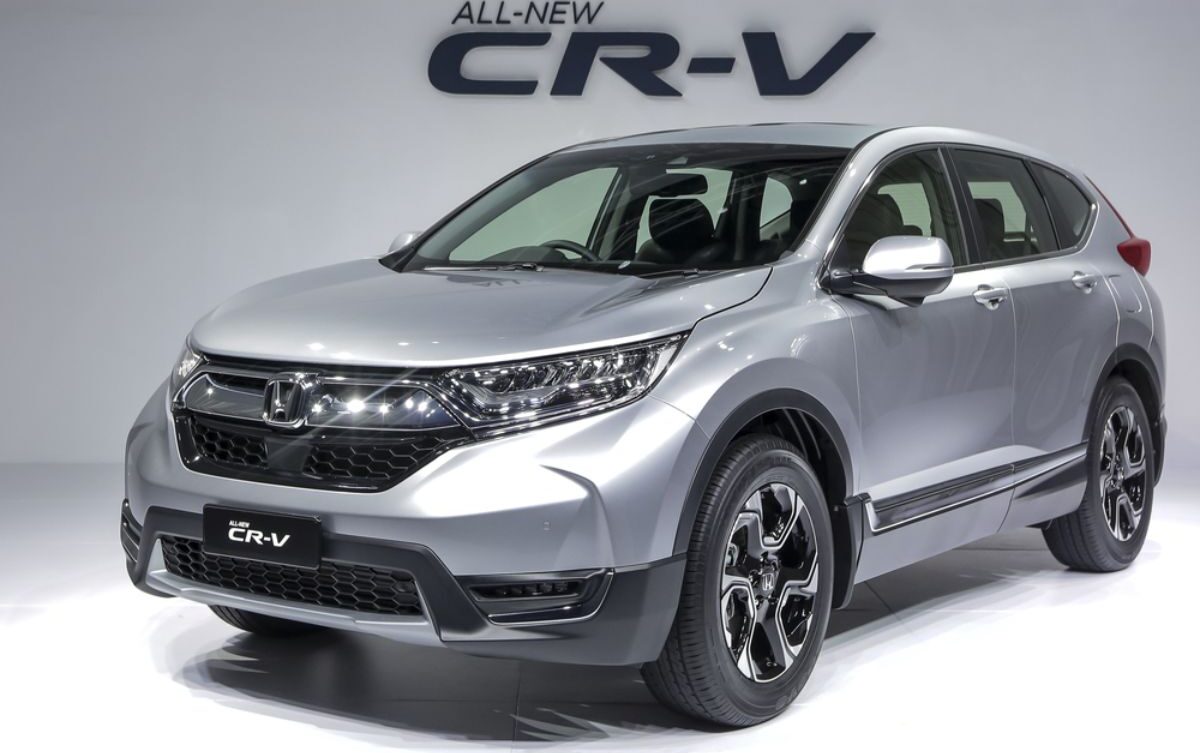 A classic favorite, the Honda CR-V is similar in size to the Tiguan with room for 5 passengers. Many people choose Honda because of its well-known reputation for reliability and durability.

Like the Tiguan, the  interior of the Honda CR-V also features dual/side-by-side cup holders. This seems like a nuance, but it’s actually really convenient for road trips or any time you have a front passenger who also needs a place to put their drink! Or even for you, that extra cup holder gives you somewhere to leave yesterday’s coffee.

Its horsepower is 190 and it claims to get 34 MPG hwy. Its Touring trim gets to 60 MPH in 7.8 seconds, while the front-wheel drive models take a lagging 9.3 seconds. It can tow only 1,500 lbs. This is definitely less powerful than a handful of other SUVs of similar size. 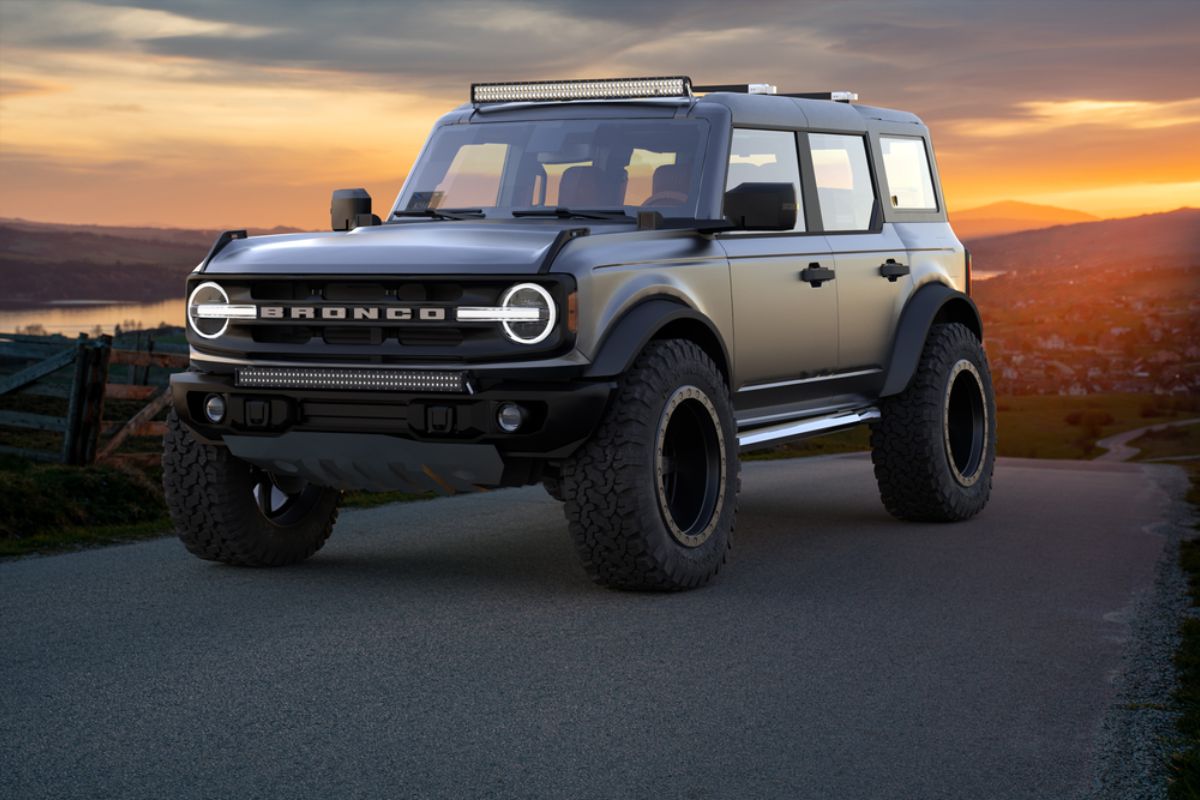 The Bronco is back! I realize it’s been a minute since this was announced, but it seems like it’s just now being driven all over the place now that many people are finally getting their cars they had pre-ordered during Covid-19/the microchip shortage (which is not over, by the way).

The Bronco Sport is the “baby” Bronco, if you will, which makes it perfectly comparable to the small-size Tiguan. The Bronco is boxier and more rugged in style and performance. I personally prefer the regular size Bronco to the Bronco Sport, but we are reviewing small SUVs today, so ignore me! 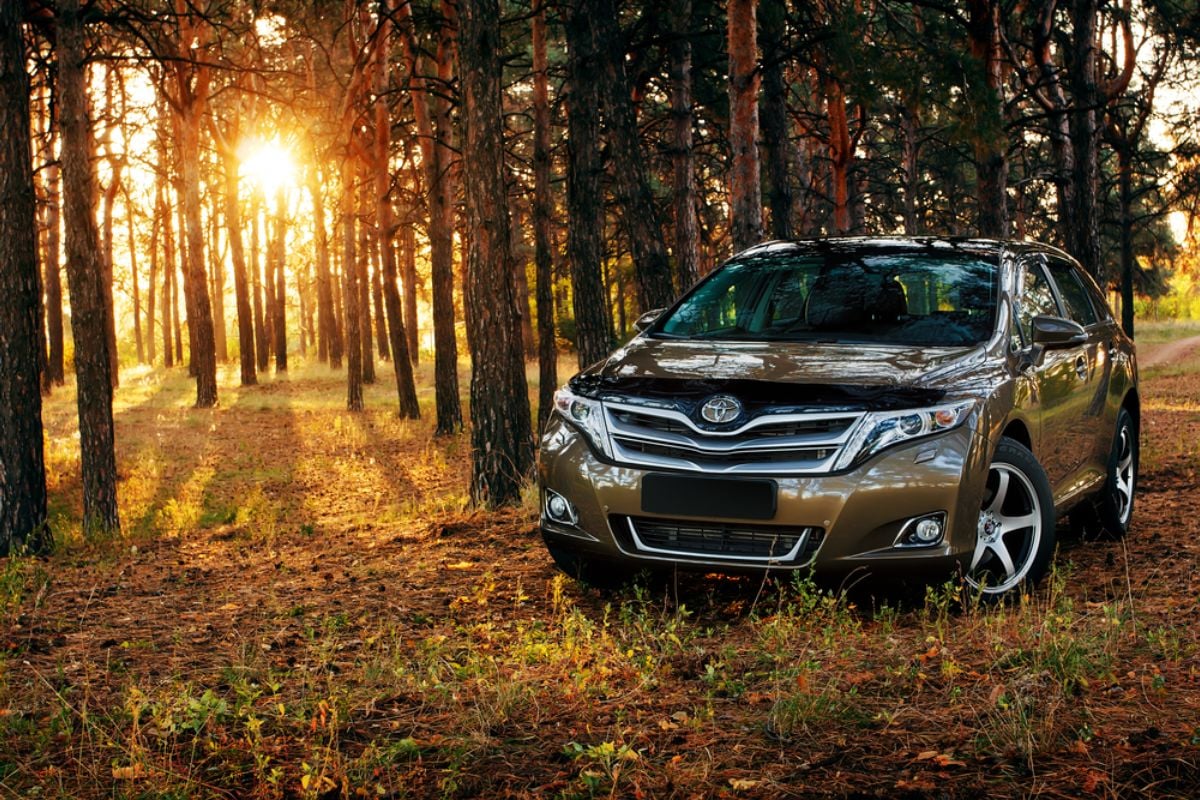 The Toyota Venza starts at $33,240 MSRP, making it slightly pricier than the Tiguan. It also has room for 5 passengers. Its front exterior design is a bit slicker and more elegant than the Tiguan.

It has the same edginess as the Mazda CX-5, in my opinion. Also, its wood trim interior for the console, with the two cup holders side-by-side are again, a win in my book. 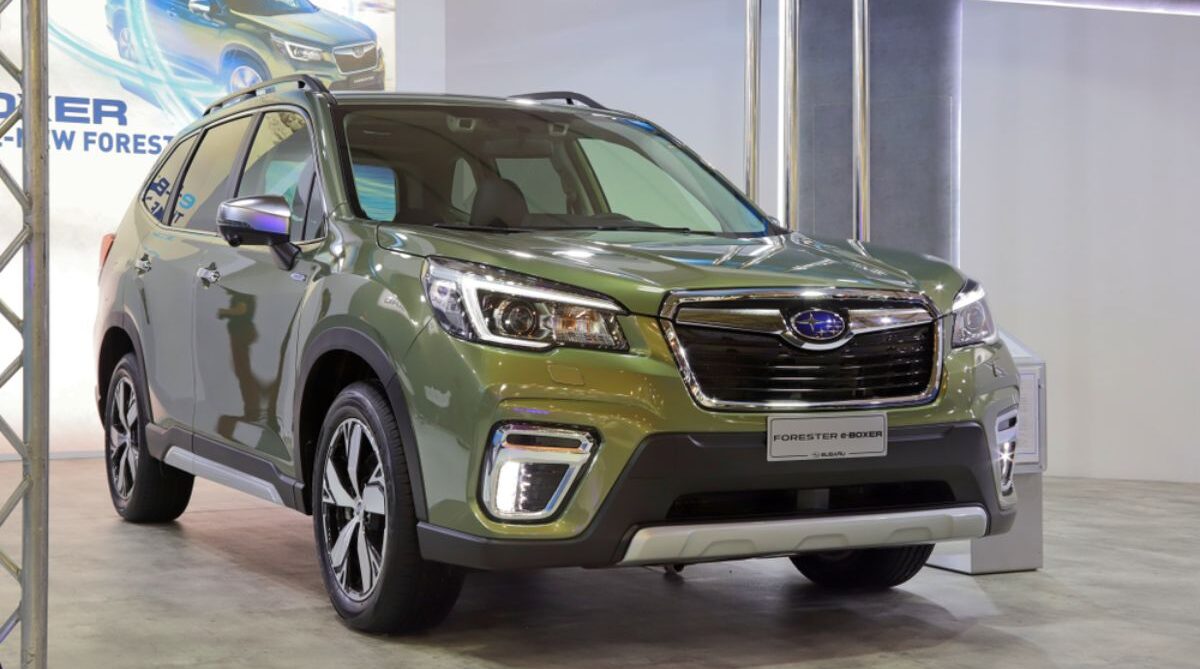 The Subaru Forester is a reliable 5-passenger SUV for outdoor adventure. It is slightly less expensive than the Tiguan in price, with a starting MSRP of $25,195 and a passenger capacity of 5. It is a smaller SUV for Subaru (compared to its Ascent model). The Forester’s interior is very hip and sporty. 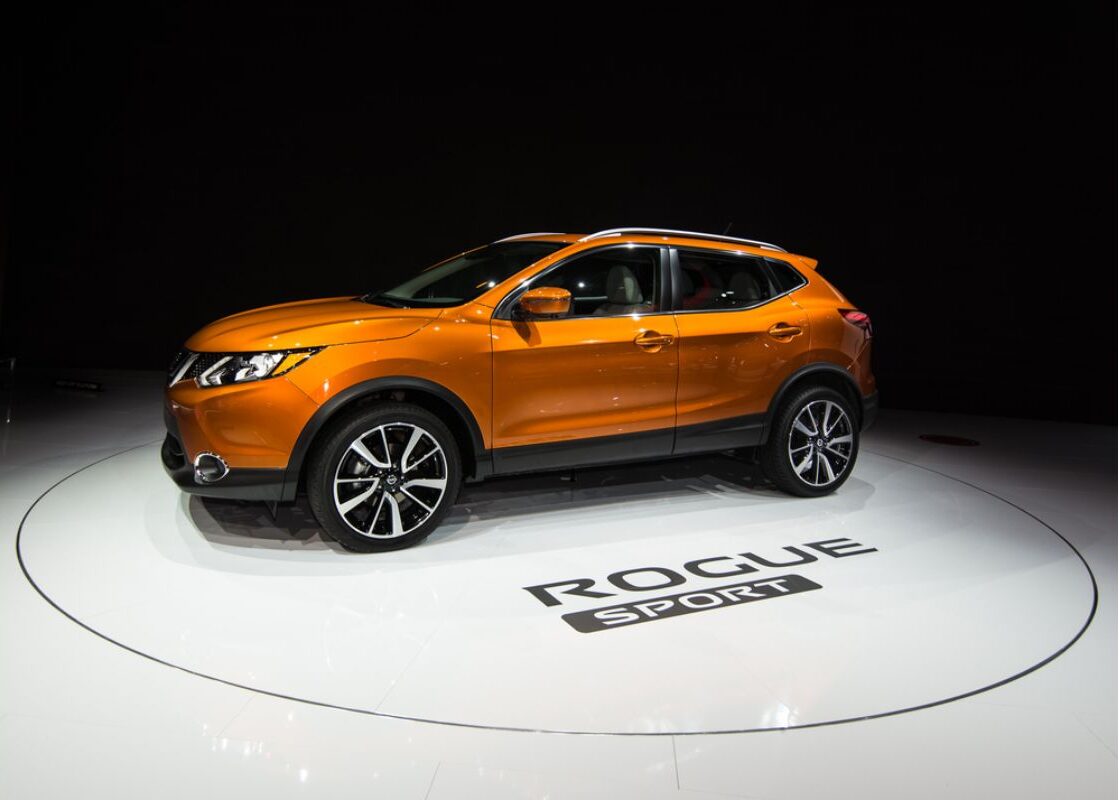 Its interior is cleanly designed, and it has the standard Nissan wheel configuration. The matte colors it comes in look better than the shiny options, in my opinion. 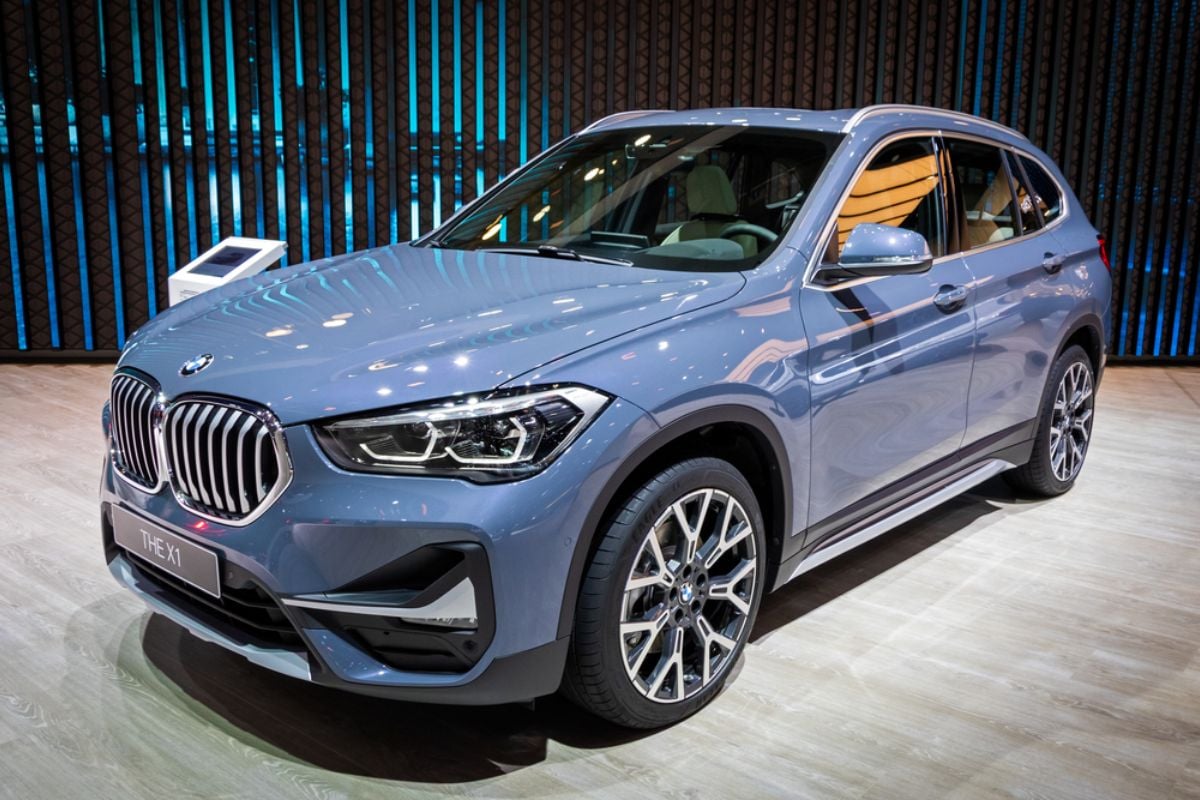 I personally have a hard time with BMW because my mom owned one, and it seemed to be at the mechanic more than it was in our driveway, but I realize the brand is beloved so I wanted to include it on the list. It does have average annual repair costs of $997 according to Repair Pal, so keep that in mind.

Like the Tiguan, the BMW X1 is a small/compact SUV, but it’s more luxurious and high-end. The BMW X1 also has a 9/10 rating from Car and Driver, making it an excellent option as an alternative to the Tiguan. 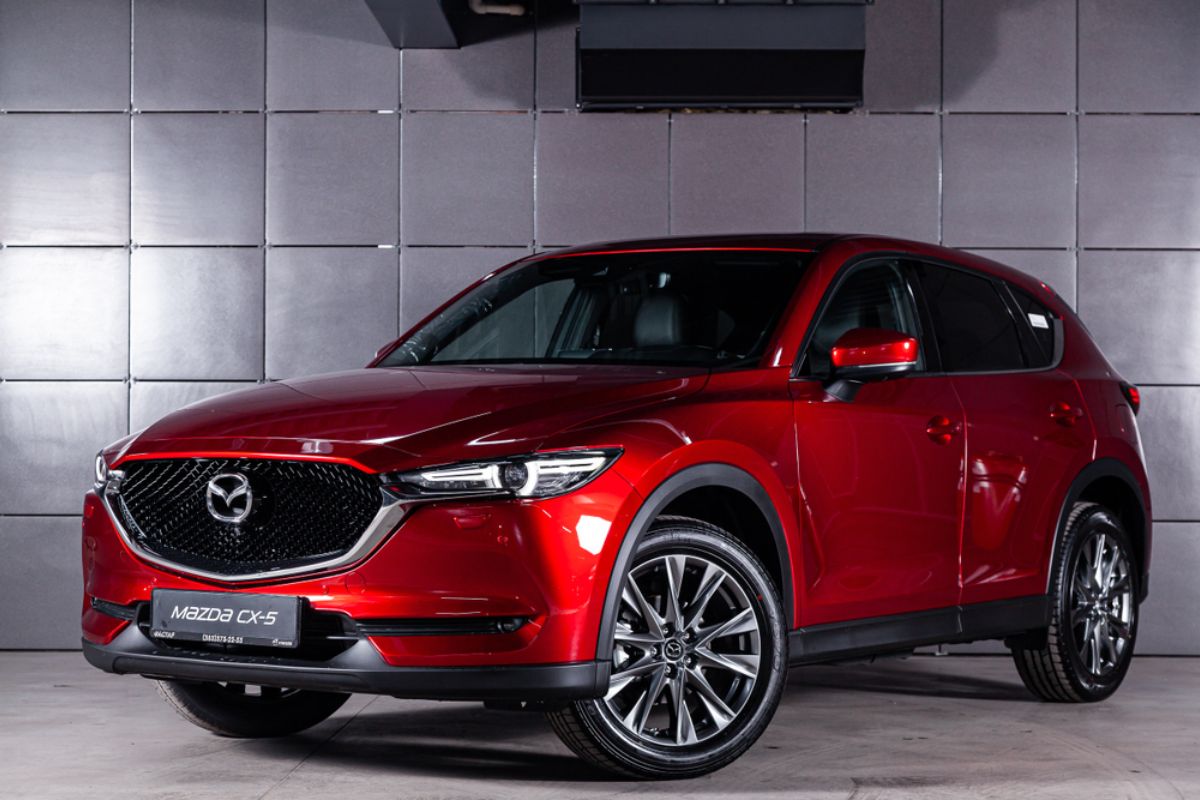 An old roommate of mine drove a Mazda CX-5, and it was so fun! It felt tight and zippy to drive, and was just a really great car from what I experienced.

It can tow up to 2,000 lbs, making it slightly more powerful than the Tiguan. However, I can’t imagine anyone needing a major tow package opting for a small SUV. You’d be better off with a larger SUV or even a truck if towing is a high priority for you.

How reliable is a Tiguan?

The Tiguan is one of the few compact SUVs with a third row seat option. However, JD Power has given it a predicted reliability score of 76, mainly due to its sluggish acceleration and subpar fuel economy.

A score of 76 is good, but not excellent. People also complain that the infotainment system is tricky to configure. When you consider how many other options there are for compact SUVs, you may find something else you like better.

Is the Atlas better than the Tiguan?

This is tricky, because I think you’re comparing apples and oranges here. The Tiguan is a smaller, compact SUV. The Atlas is a full 3-row SUV with much more room and power. In sheer size and space, yes, the Atlas beats the Tiguan.

I will say, if I had to choose between the two, I would go with the Atlas. Among the SUVs similar to the Atlas, I like the Atlas more than its competitors.

Honestly, I don’t know if I can say the same for the Tiguan. When I look at the Tiguan’s competition, there are other options that I like more (like the Tucson and the Mazda CX-5, for starters).

It really just depends on what you are looking for in an SUV, what your budget is, and what your absolute needs/must-haves are. That will tell you how to proceed with your decision.

What trim levels are available for the VW Tiguan?