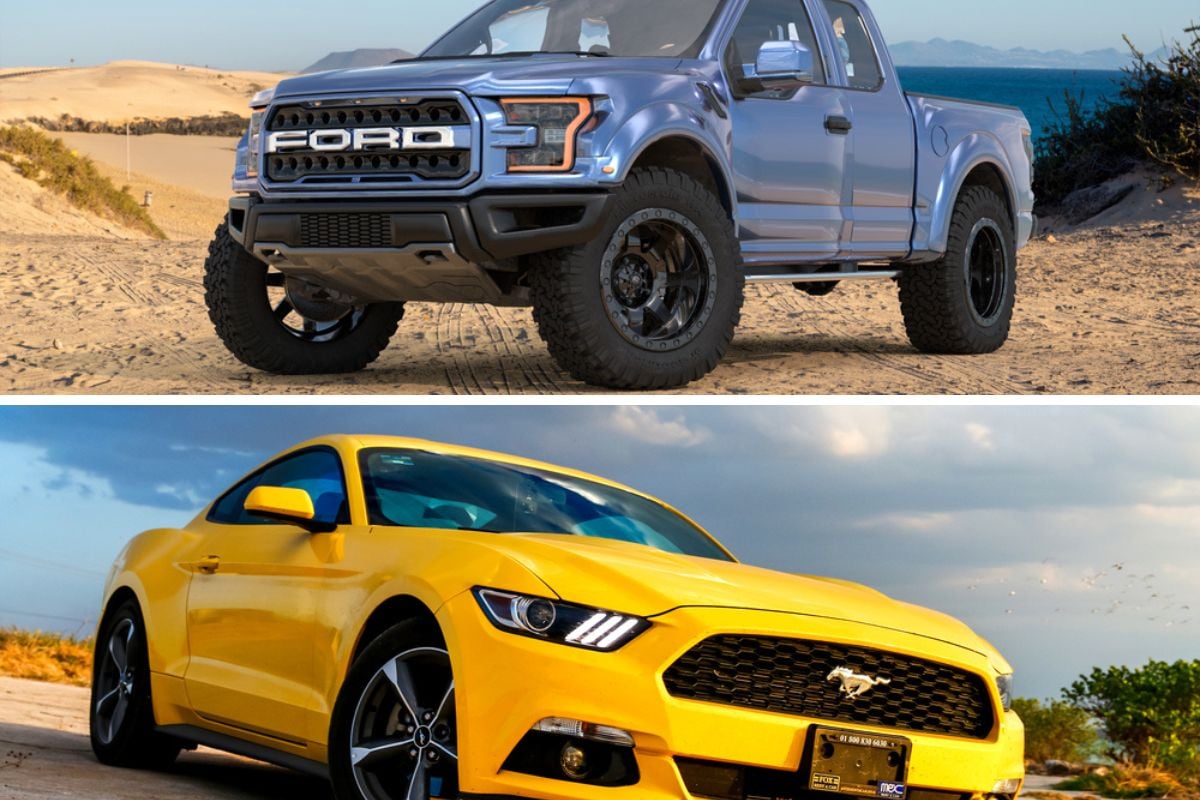 Wifey and I met at a Ford Motor Show back in the day. Ever since, the one thing we have totally agreed on is the Ford brand. So much so that, when it came time to purchase, possibly our last new motor vehicle before knocking on heaven’s door, we knew it would be a Ford-but which make?

Well into my mid-life crisis, I was hell-bent on a Ford sports car, something like a 2022 Ford Mustang. Wifey, on the other hand, was equally determined on us getting a utility vehicle, a Ford pick-up truck, something like a 2022 Ford F-150. While earlier in our marriage, Wifey and I would have argued “until the cows came home”, now, however, after donkey years of marriage and the eternal “Professor Google” and a wealth of sources of information, we are past bickering.

These days we simply consult Prof. Google for mediation-and that’s exactly what we did with our sports car vs. pick-up truck dilemma. Below is what our research revealed and advised, which I am only too happy to share……..

Contents Show
Definition
What is a Ford Mustang?
What is a Ford F-150?
Features
1. Design
2. Durability
3. Cost Differences
Benefits of Each
Brief History of Each
Similarities between the two
Other-Lifestyle, Budget, and Spousal Pressure
Conclusion

What is a Ford Mustang? 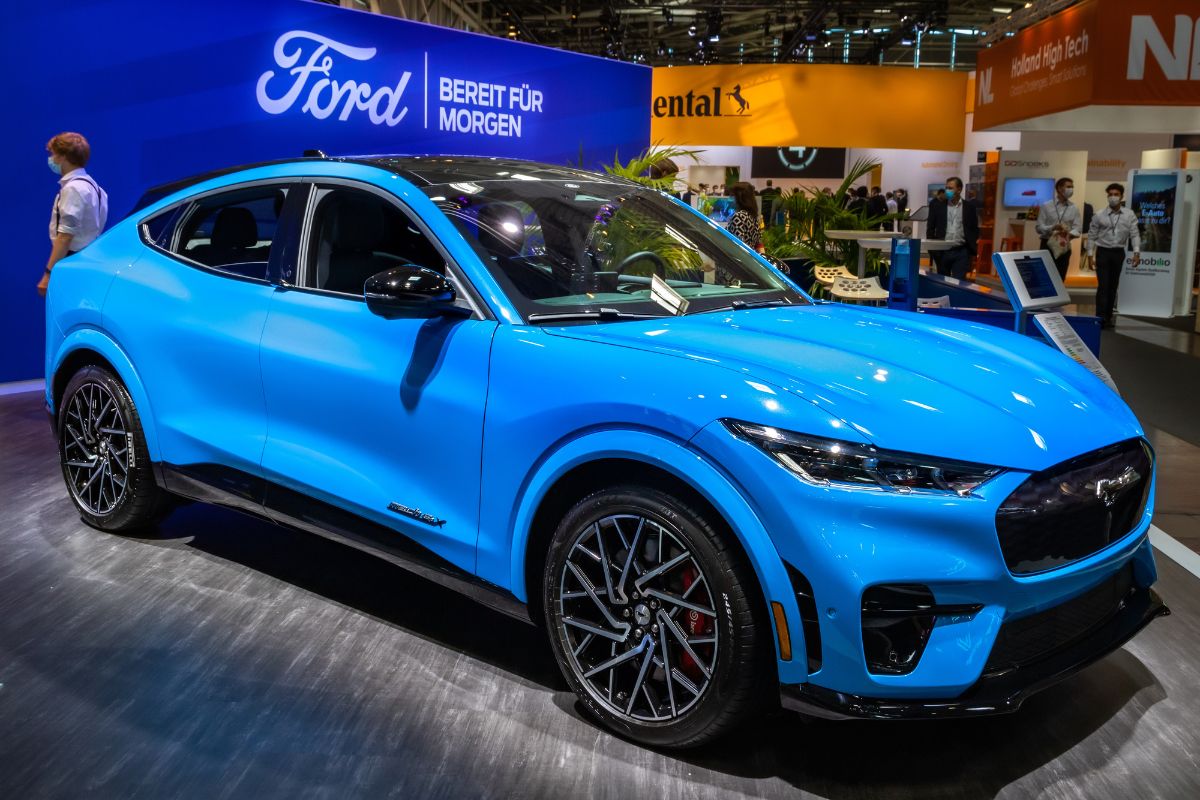 The Ford Mustang is a classic American muscle car. It is a sporty, high-performance, two-door coupe that is a favorite among many car enthusiasts for its fast acceleration and agile handling. For 2022, it comes as either a Hatchback or a Convertible.

Ford has this year given Mustang shoppers a selection of four trim levels of the popular steed. These include the EcoBoost, EcoBoost Premium(Stealth Edition with four-cylinder and 19-inch wheels), V-8-powered GT models-GT, and GT Premium with a unique black grille, a scoop on the rear fender, and other exclusive exterior and interior appointments. Then, last but not least, is the Mustang Mach-E EV.

These are available with a 4.6 to 5.0-liter V8 engine, a six-ten speed manual or automatic transmission, and over 400 horsepower. Judging by its horsepower, the Ford Mustang is not only good-looking, but it is also a muscled powerhouse that puts back the high-in-performance sports car. 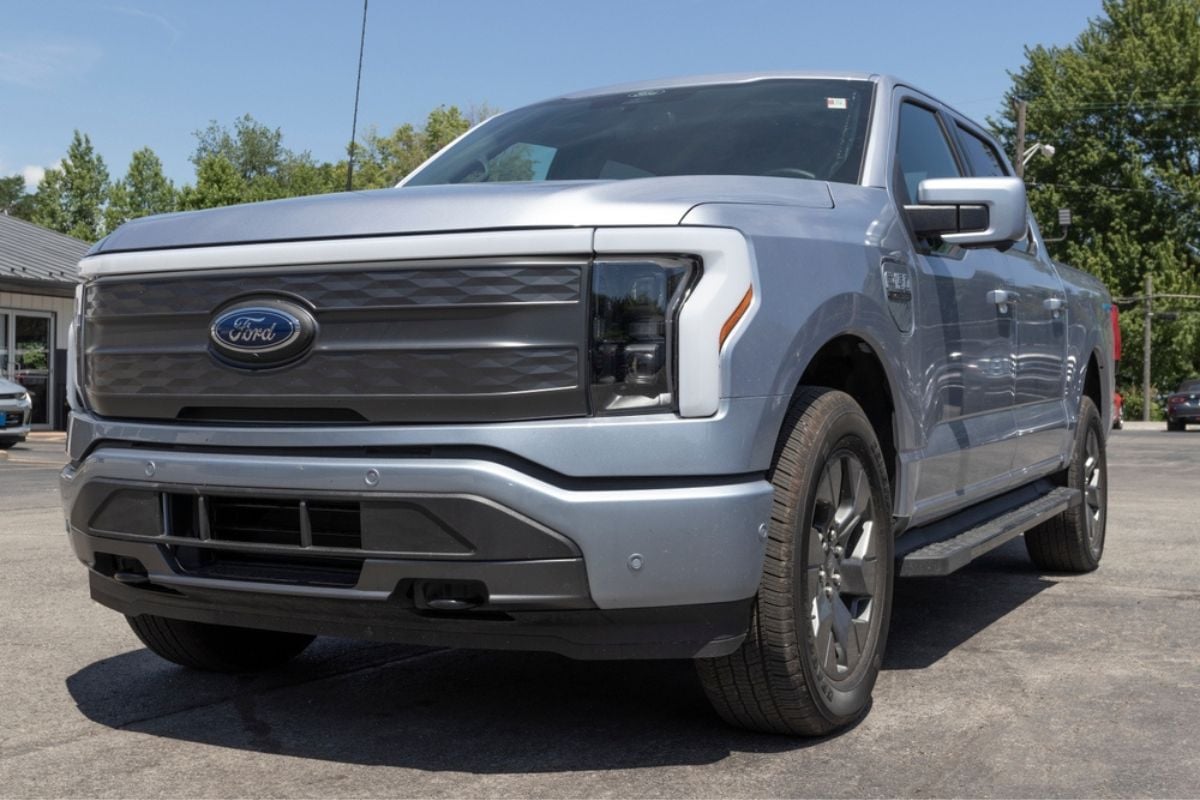 There is also a distinctive rattle-snake-inspired logo in the 2023 design. 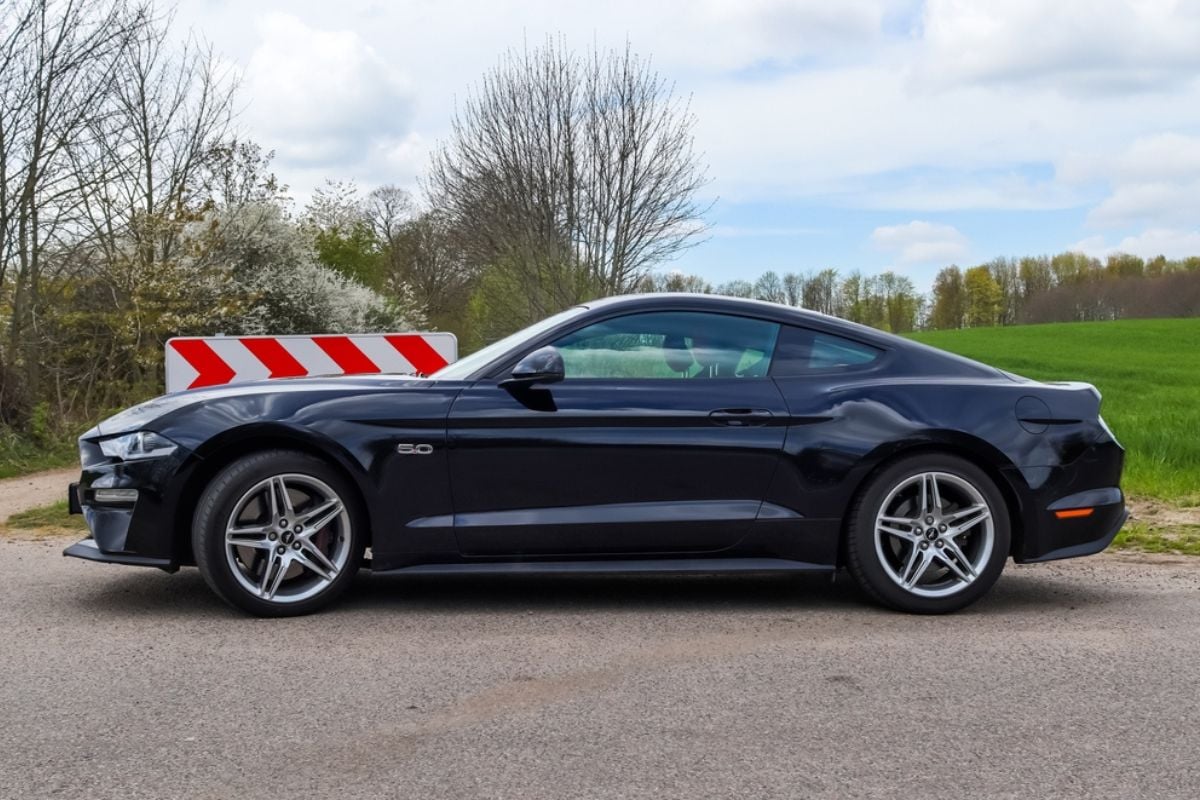 As it has for the past almost 60 years, the 2022 Ford Mustang continues the tradition of a sleek, curvy design and spacious interior. While the interior will not exactly knock you over, Ford has managed to maintain the Mustang’s evolutionary design that has throwbacks to Mustangs of old while managing it to be fully functional and livable. It’s available with premium features such as heated and cooled front seats, Apple CarPlay, Android Auto, a superb sound system, and a Wi-Fi hotspot.

In addition, Ford Sync Connect, which allows users to control and monitor their vehicle through a smartphone app, is included as standard. That said, however, to be totally honest, the 2022 Mustang’s interior quality is not exactly impressive, its optional Recaro seats are uncomfortable, to say the least. Mediocre plastics and cramped Headless Horseman are also demerits. 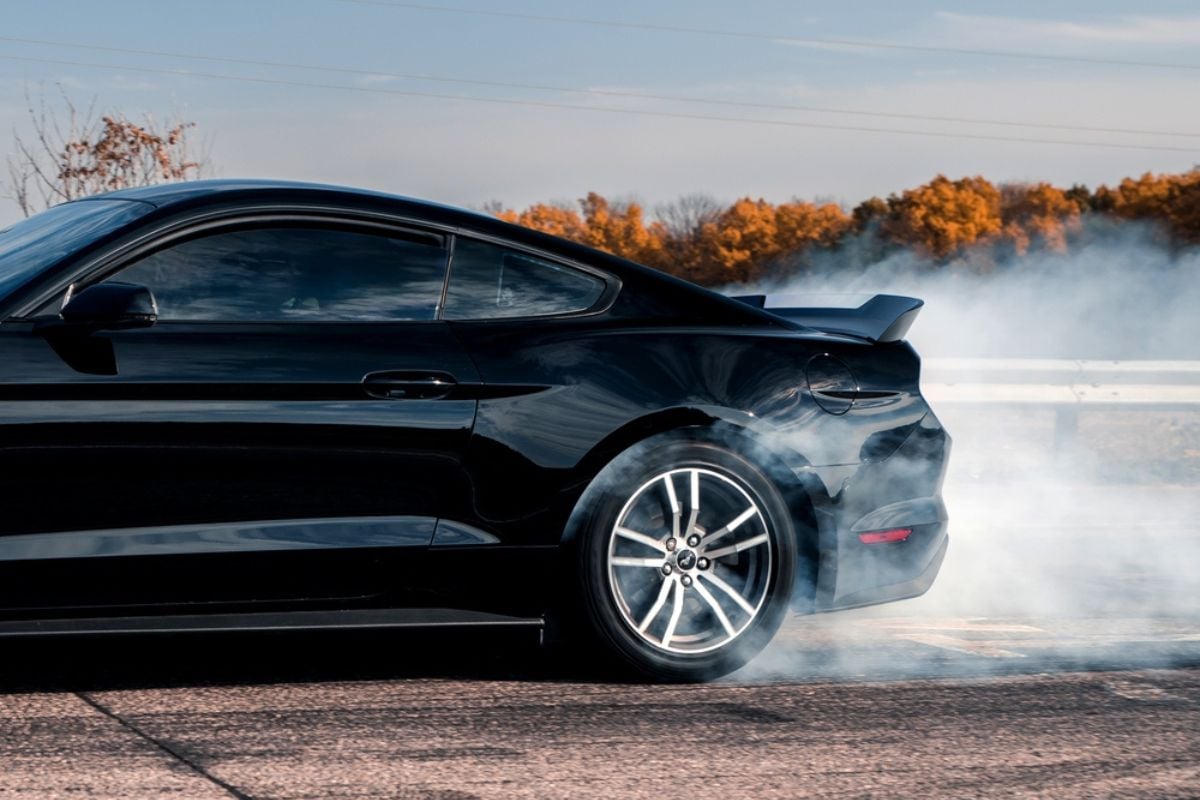 In true Mustang style, this pony giddps from 0 to 60 mph in 4.4 seconds. On the other hand, the Ford F-150 also comes with a lot of interesting and important design features. Like its 2022 offerings, the 2023 F-150 is available with several engines and horsepower. 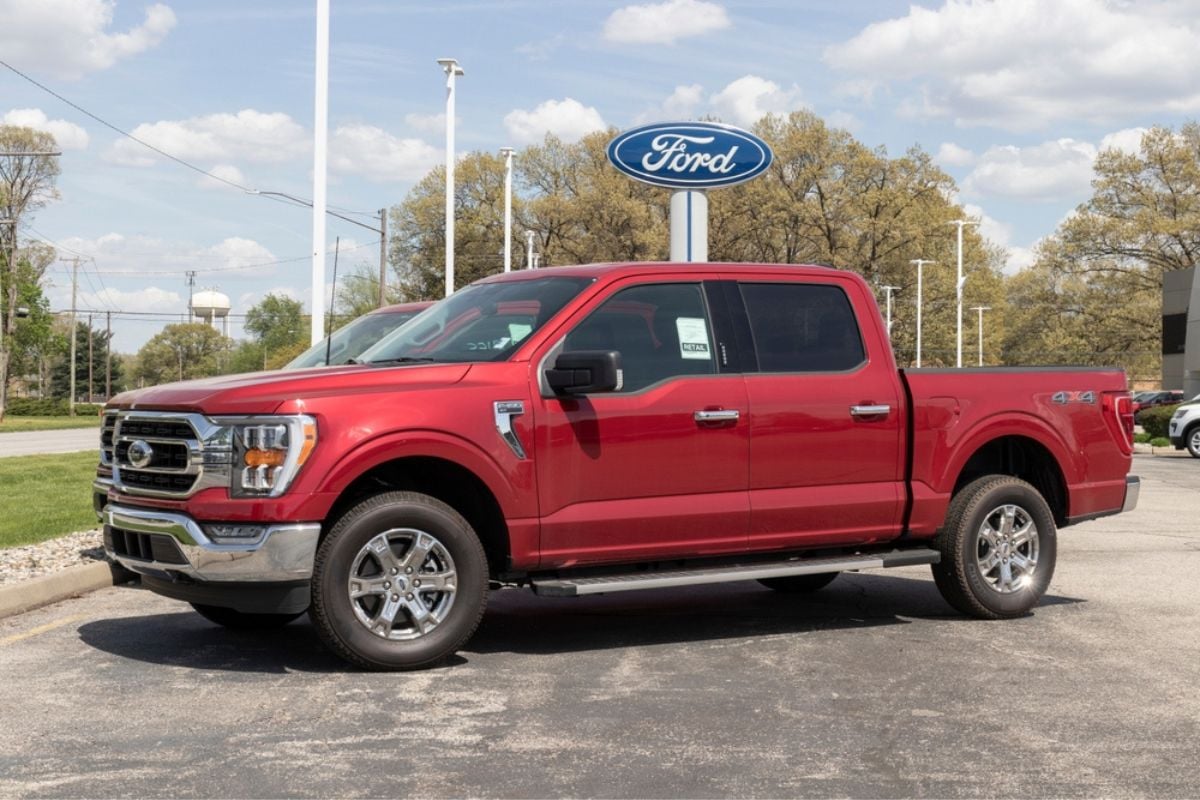 For the first time, the F-150 is also offered with a hybrid powertrain. Ford claims that the new 400-hp hybrid powertrain consists of a 3.5-liter twin-turbo V-6, a 35 kW electric motor, and a 10-speed automatic transmission. Buyers will be able to choose between rear- and four-wheel drive with any of the F-150’s available powertrains.

The Ford F150 can seat five passengers and up to three-quarters of a ton of cargo. However, the Ford F-150 Lariat, XL, and XLT comfortably seat six passengers. The Mustang, on the other hand, seats only four passengers. 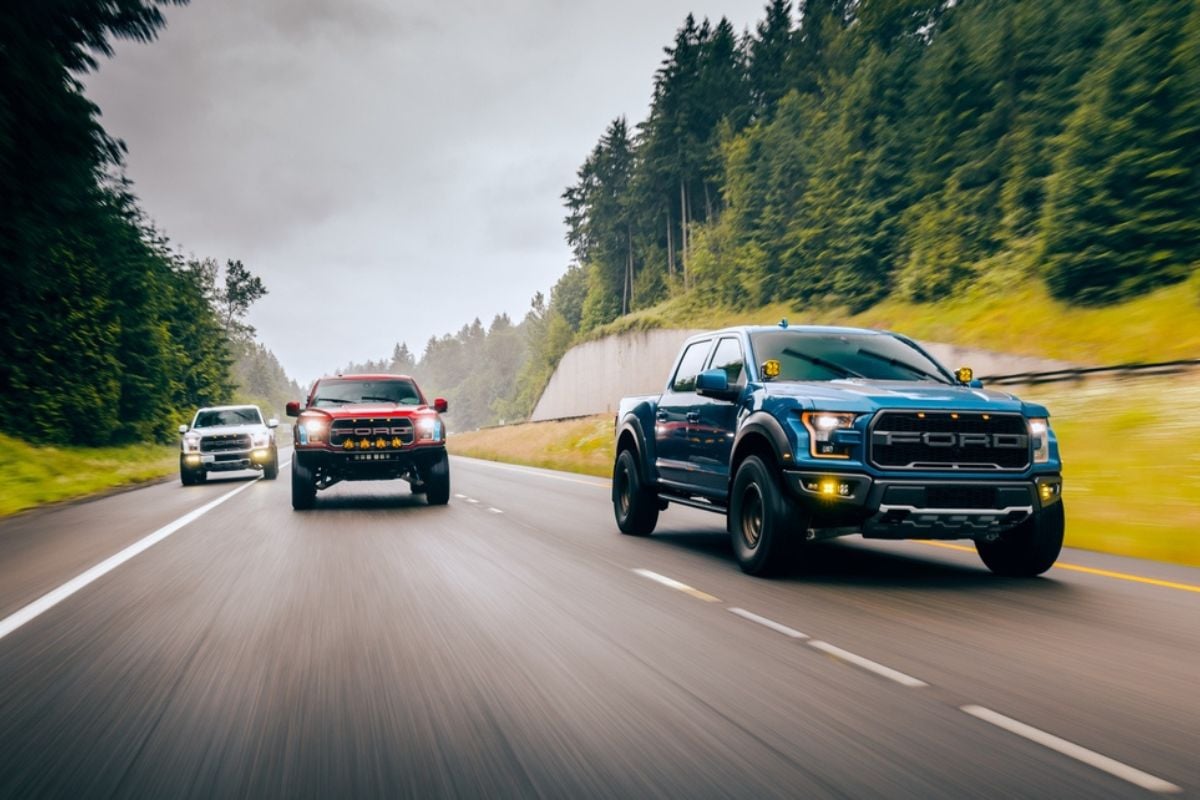 The Ford F150 is a durable, high-quality truck that can carry anything you need to get done. With a bed that can fit anything from hay bales to luggage, the F150 is the perfect vehicle for those looking for a tough, durable truck. Around for close to sixty years, the Ford Mustang’s durability is in so far as it has defied the test of time.

However, how durable it would be if driven off-road, away from the city and highways, is anyone’s guess. 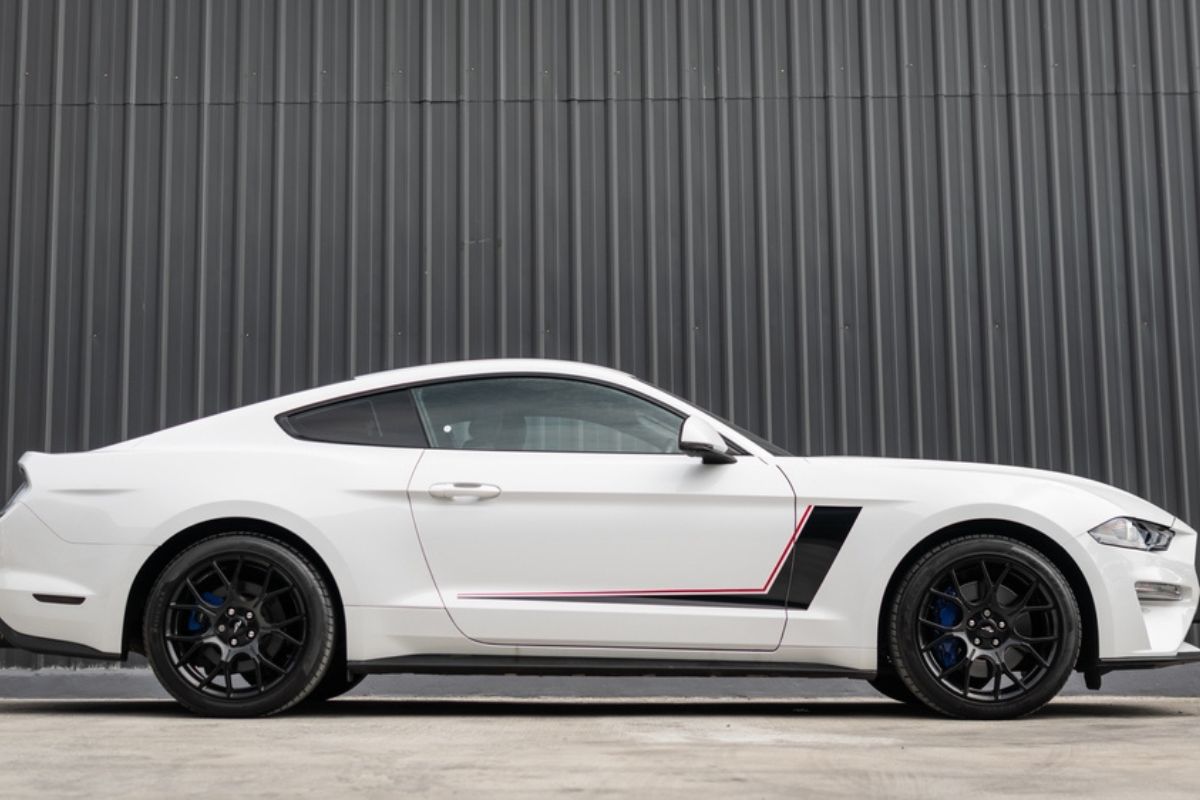 The F-150 is indisputably the more expensive of the two. 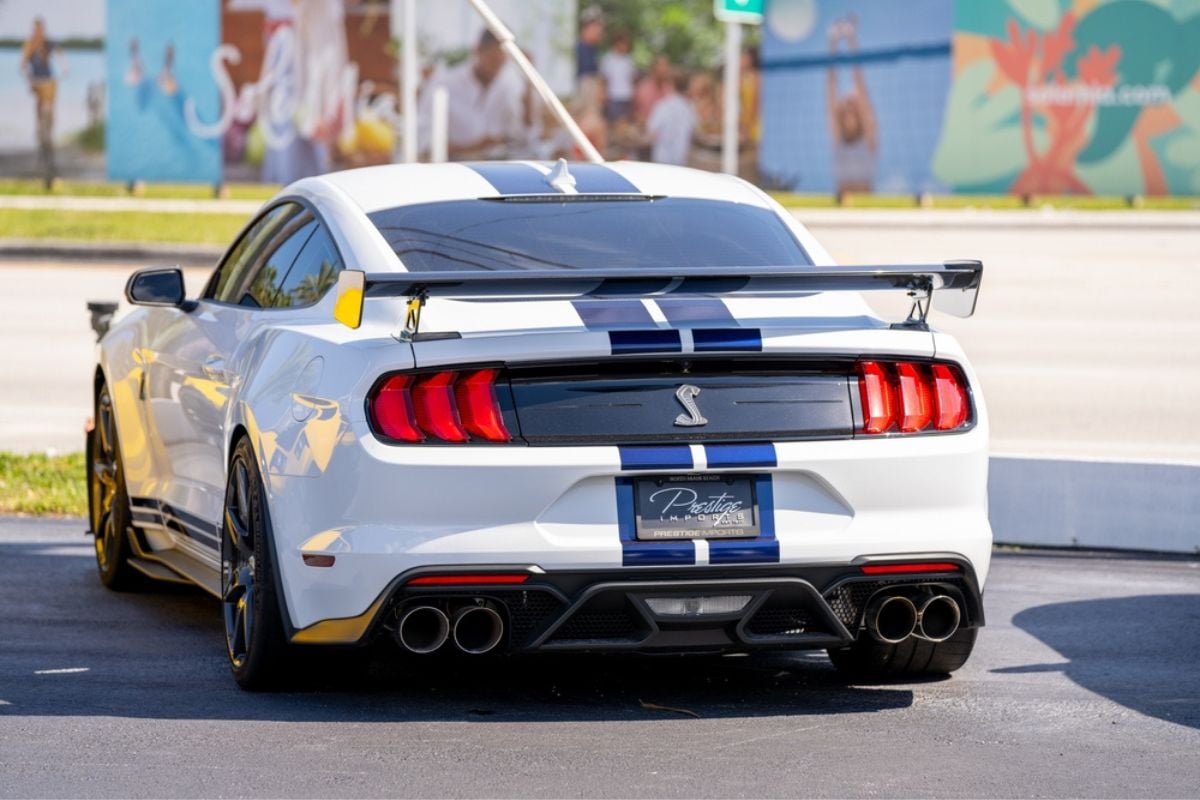 The Mustang’s fuel economy is 15/24 mpg. However, the most efficient Mustang is the one powered by a turbocharged four-cylinder with a 10-speed automatic. This earned EPA ratings of 21 mpg city and 32 mpg highway.

The V-8–powered Mustang earned ratings of 15 mpg city and 24 mpg highway. It is perfect for someone who is looking for a car that’s easy to maintain and has relatively good gas mileage. The Ford Mustang’s fuel economy is slightly comparable to the F-150’s.

When it comes to safety, you do not need to fear. The Mustang comes equipped with more driver-assistance technology than any rival pony car. So feel free to go faster and yet still feel safer.

The Mustang’s back seat stows by pulling a strap and folds easily by hand. So, should you need to transport up to 12 carry-on bags, then the Mustang is your car. However, whilst the Mustang only has a large trunk, the 2022/3 Ford F150 models have towing capacities of between 8,200 and 14,000 pounds depending on the model available.

However, I advise checking with the manufacturer or your vehicle’s handbook before attempting to tow anything-especially on the heavy side. On the safety side, the F150 offers a multitude of driver-assistance features, but few are standard. More features are available as you go through the F-150’s trim levels.

These even include a rear-facing camera for monitoring a trailer while on the go. 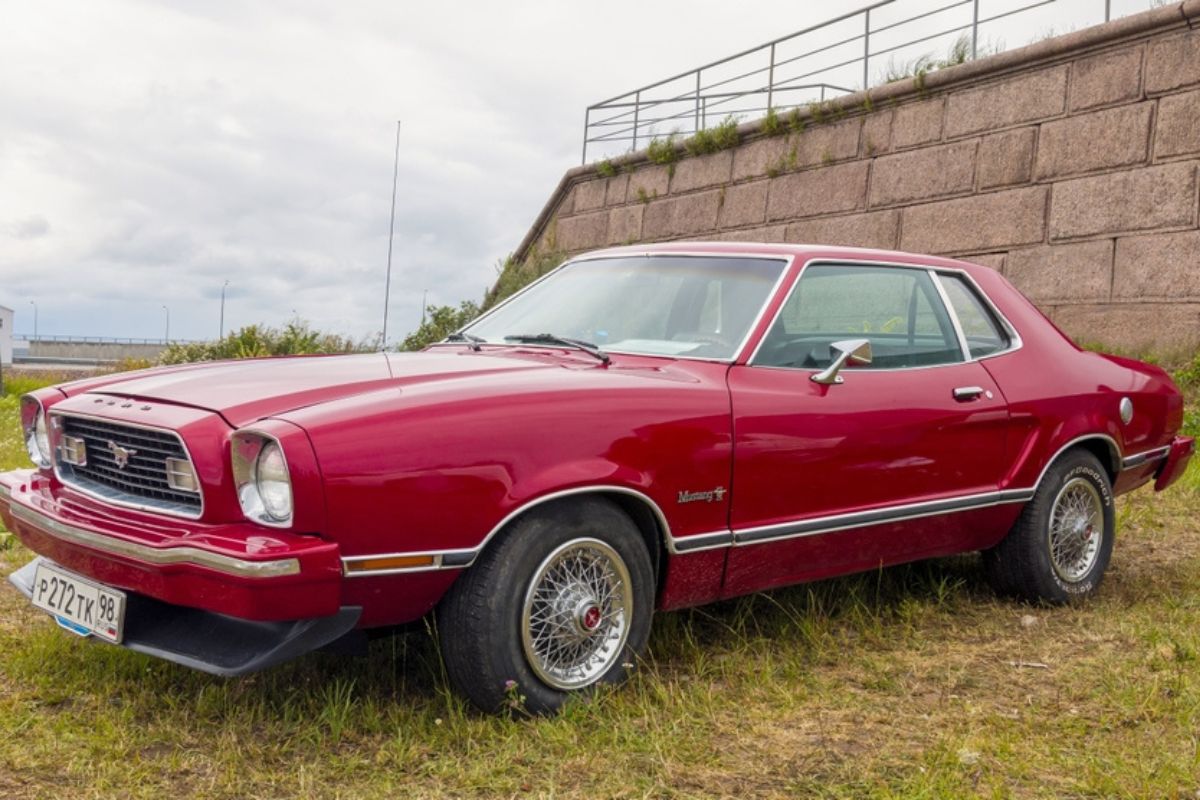 First introduced to the world in 1964, the Mustang was introduced as a two-door coupe with a sporty, agile, and sleek design. The Mustang was an instant success and became one of the most popular cars in the world. Over the years, the Mustang has undergone many design changes to become the modern-day sports car.

Re-launched in December 2015, with its unique, sleek, and aggressive design, the Ford Mustang had more than 20,000 expressions of interest and hundreds of confirmed orders before pricing was even announced. Then, it went on to sell more than 6000 units in its first 18 months on sale. Originally intended to be a competitor to the Chevrolet Corvette, the Mustang has become an iconic symbol of America’s car culture.

Today, the Mustang is a popular choice for both muscle car enthusiasts and drivers who want a sporty and high-performance vehicle. It is also known as the Ford Mustang GT in some markets.  Purpose-built from the ground up, the Ford F150 is part of the Ford F-Series of trucks first marketed and built by the Ford motor company. It has been around since 1948.

Originally known as the Ford Bonus-Built trucks, unlike earlier versions, this series of trucks was the first to be built on a dedicated truck platform. The F-150 has been the best-selling vehicle in the United States for thirty-six years, and it is one of the best-selling trucks in the world.

Similarities between the two 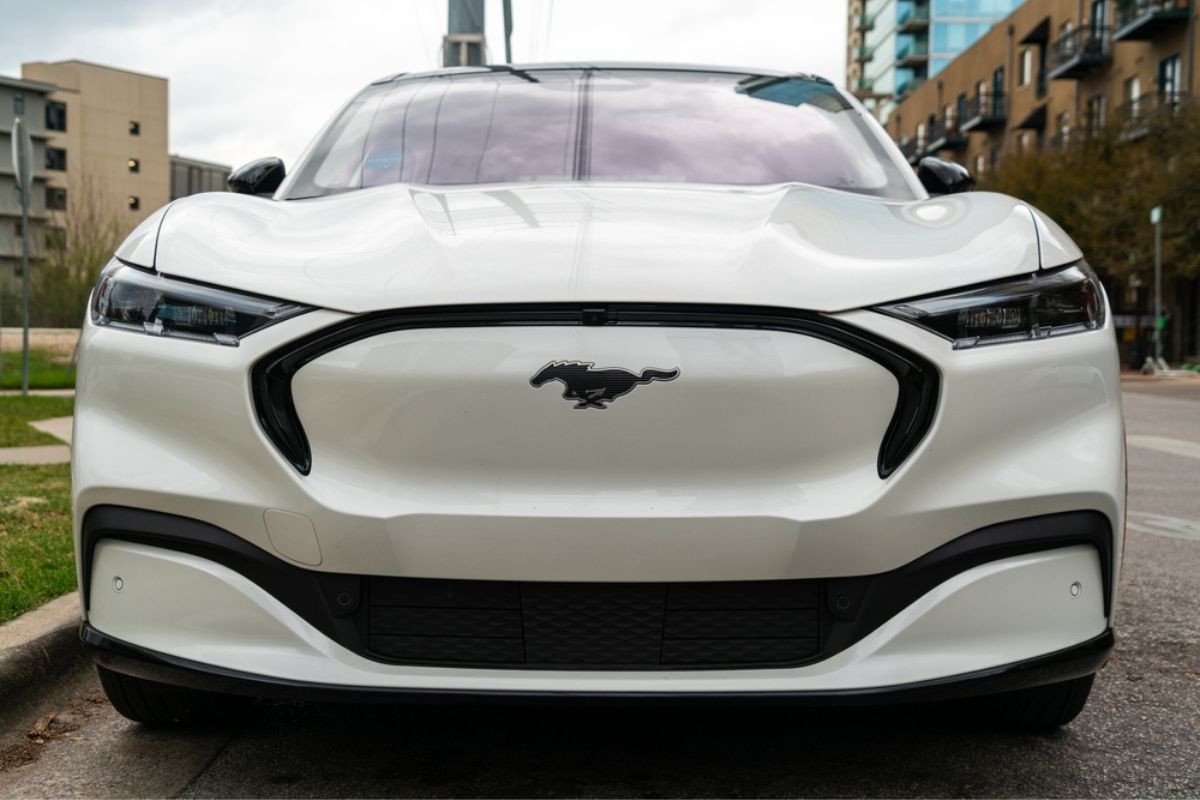 Aside from being iconic American classic car makes manufactured by the Ford stable, the Ford Mustang and Ford F-150 are as similar as a cat and a dog.

Although sports cars have their advantages and disadvantages over trucks, depending on your lifestyle, budget, plans, and need, I say, spousal pressure, all these other factors also have to be taken into consideration.

So, despite successfully arguing that a sports car is often more reliable, cheaper in terms of upfront costs as well as insurance, than a pick-up truck, easier to maneuver and handle, better at fuel efficiency due to the size and weight difference, and would also allow us to save money on our monthly payments, Wifey was adamant. With her “you’re-so-heading-for-the-couch” gleam in her eyes, she instead counter-argued that, being close to retirement as we are, we were not on a strict budget and could splurge on a Ford F-150. Besides, since we planned to retire and move out of the city, we needed the utility and safety benefits and comforts of a truck-dear reader, we bought a Ford F-150.