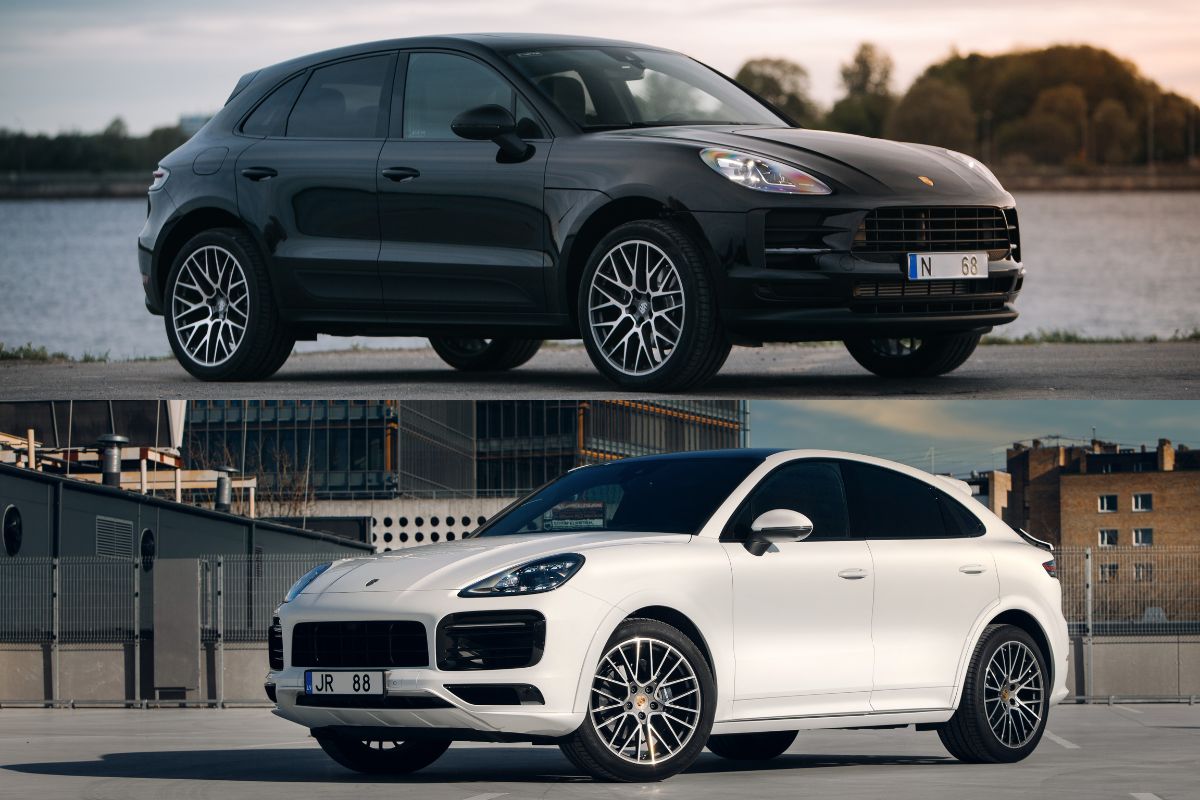 The Macan is touted as a crossover with a sports car attitude. The Cayenne? It’s another SUV with the heart and soul of a sports car, and the performance of both of these German SUVs is stellar.

The Cayenne and Panamera held on to their very obvious Porsche heritage in their designs, and the Macan, which came out a few years after the above two vehicles, kept its Porsche panache.

The history of the Porsche Macan

Designated a high-performance, luxury crossover, the Macan hit the world’s roads in 2014, a few years after the Cayenne had made its debut. Slightly smaller than the Cayenne, the Macan can transport five passengers in a high level of leather-clad comfort.

The Porsche Macan is produced alongside the Panamera and Cayenne. Therefore, they look like them both, except for their size. Moreover, the performance and handling of the Porsche Macan are on an equal level to its larger siblings.

The Macan has seen few changes since its inception. However, in 2019, Porsche gave it a minor facelift, the exterior design it wears today.

The Macan is a solid Porsche; from its 911 nose to its retreating tail lights, its heritage is very identifiable. Available in four trim levels, the base model’s starting MSRP for the Macan is $57,000.

The Macan T has the same inline four-cylinder engine as the Macan. However, its track time is 5.8 seconds, instead of the 6.0 second time of the Macan.

However, if you want to go very fast instead of moderately fast, the Macan GT can be yours for a starting MSRP of $82,900.

What’s the difference? The Macan is the base model powered by Porsche’s turbocharged 2.0-liter inline 4-cylinder, which develops 261 horsepower. The zero to 60 times for this trim level of the Macan is 6.0 seconds, flat.

A 2.9-liter twin-turbo V6 powers the Macan S. This engine develops 375 horsepower. This power lowers the zero to 60 times from the Macan to the Macan S, to 4.6 seconds. Now we’re talking.

When the 2.9-liter V6 is dropped into the Macan GTS, it is tuned to develop 434 horsepower. This power launches the Macan GTS from zero to 60 miles per hour in 4.3 seconds when equipped with the Sport Chrono Package and is the fastest Porsche Macan in the lineup. 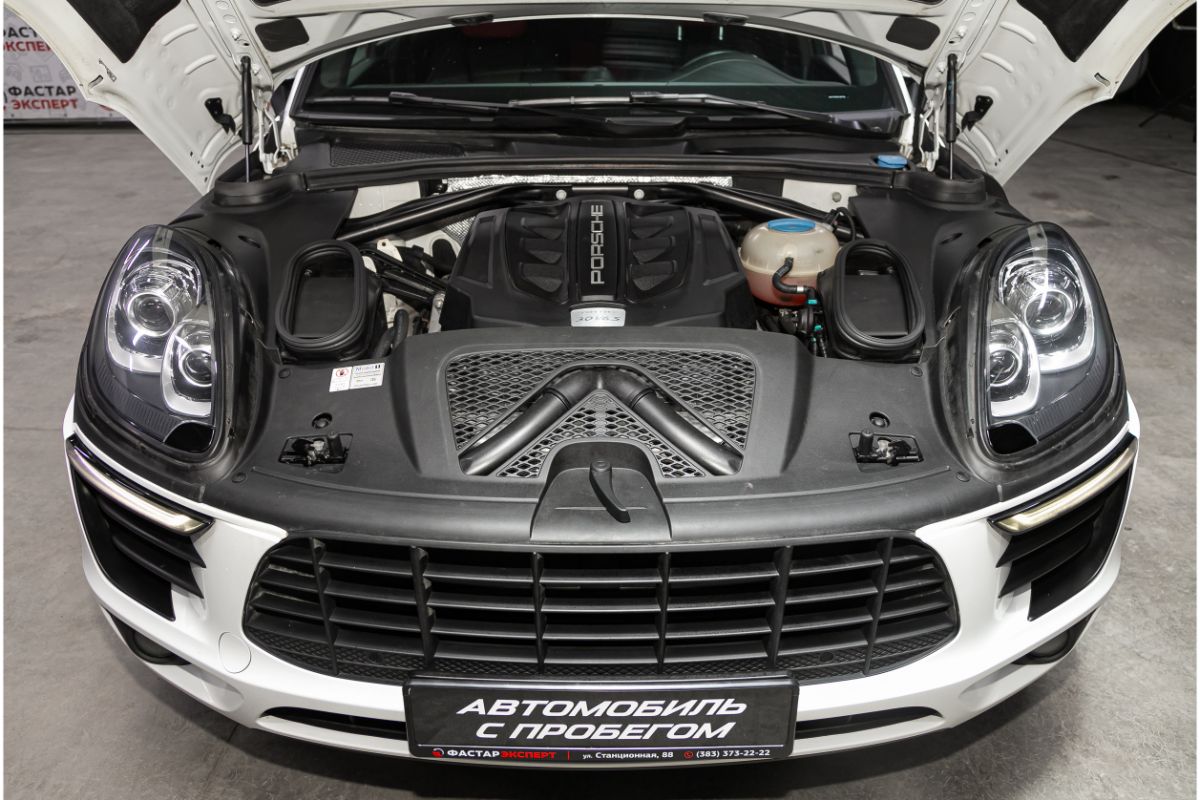 The engine of the Macan models uses a seven-speed Porsche transmission to get the power from the engine to the road. Other drive train features include the Porsche traction management system, which gives you active all-wheel drive.

The Macan is smaller than the Cayenne, and the smaller space doesn’t seat five as well as the larger SUV. However, the Porsche Macan does what they all do best: to give its driver a spirited adventure every time they close the Macan’s door and start its engine.

Cargo space is also smaller for the Macan. However, if you can have the same performance as the bigger Cayenne for several thousand dollars less, rest assured, you are still buying a Porsche with all its attributes and peculiarities.

The electronics suite in the Porsche is as well thought out as the drive train, and the Macan is equipped with sport air suspension that can give your Macan up to 8.9 inches of ground clearance.

When properly equipped, the Porsche Macan can tow up to 4400 pounds, so if you run out of space inside your Macan, you can pull it behind you.

Reliability of the Porsche Macan 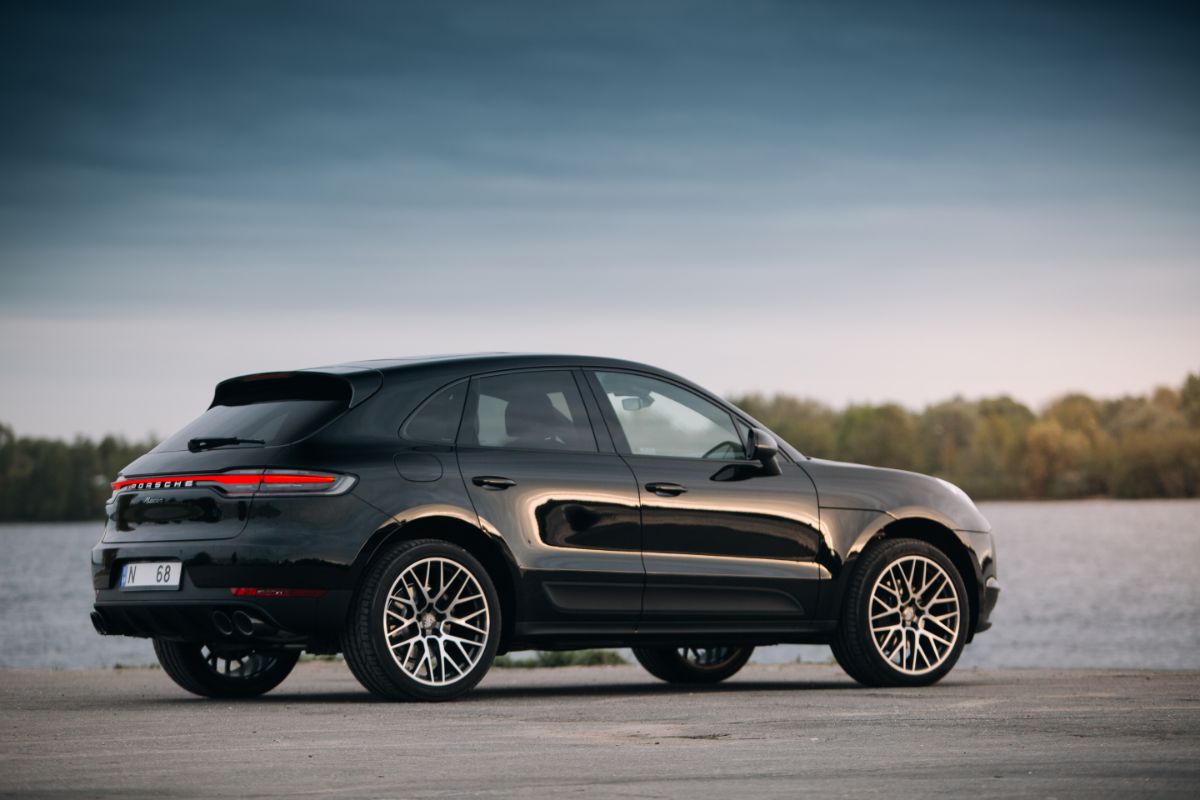 Although there have been a few complaints about the reliability of the Porsche Macan, there are several reports of electrical issues unrelated to the engine.

Cost to own a Porsche Macan, yearly

The average annual cost to maintain a Porsche Macan is about $1,400. However, the highest price to own your Macan will be depreciation, which is so with any vehicle. The good thing is that the Porsche Macan will retain 42 percent of its value after five years.

The history of the Porsche Cayenne

The Porsche Cayenne is a mid-size SUV that began its journeys on the world’s roads in 2002. As the first four-door Porsche ever produced, it offered buyers a V8 when the competition was down-sized to V6 engines.

Initial acceptance of this four-door Porsche with a front-mounted V8 instead of a Boxer engine in the rear was not as warm as expected. However, until enthusiasts got behind the wheel, they then realized that Porsche was on to something, and the Cayenne stayed in the lineup and has fared well against the competition in the SUV segment of the auto world.

In its fifth generation of development, the Cayenne now reveals an aggressiveness to its façade. In addition, in 2015, an E-hybrid variant was added to the mix of models.

In 2020, the most significant change made to the Cayenne was the addition of the Cayenne Coupe. The distinction of the coupe over the standard body of the Porsche Cayenne is its sloped rear fastback lines.

In 2021, several models of the Porsche line, including the Cayenne, got facelifts carried into the current model year. As I noted, the early Cayenne’s had a softer look to their lines. However, the rework of the Cayenne in 2021 took its under-the-radar profile to something racy that looks fast when standing still. 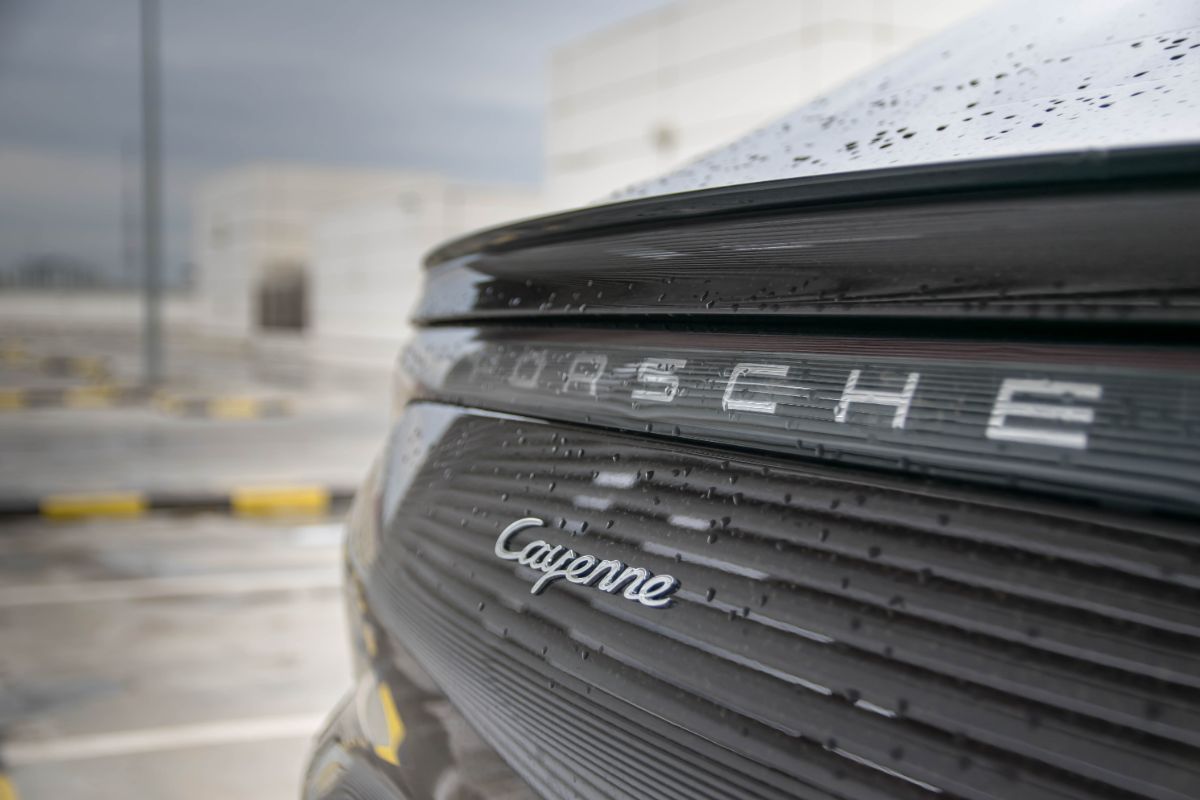 The Porsche Cayenne is available in six gas-powered trim levels. There are also six trims for the Cayenne Coupe and four trim levels that offer hybrid power.

So what’s the difference that commands such a price increase from the base model Cayenne to the Cayenne Turbo GT? Stay with me, and I’ll explain.

The first notable difference is the zero to 60-mile-per-hour times they post. The Cayenne has a time of 5.9 seconds, which isn’t bad for an SUV. However, the Cayenne Turbo GT does the same run in 3.1 seconds. Not half the time, but close.

Power in the Porsche Cayenne base model is derived from a turbocharged 3.0-liter V6 that produces 335 horsepower. Power goes to all four wheels via an eight-speed Tiptronic S transmission that facilitates driving in a manual or automatic mode.

The Cayenne Turbo GT gets a 4.0-liter twin-turbocharged V8, an upgrade from the V6, producing 631 horsepower. As mentioned, it can run from zero to 60 miles per hour in 3.1 seconds and runs the quarter mile in a speedy 11.6 seconds. 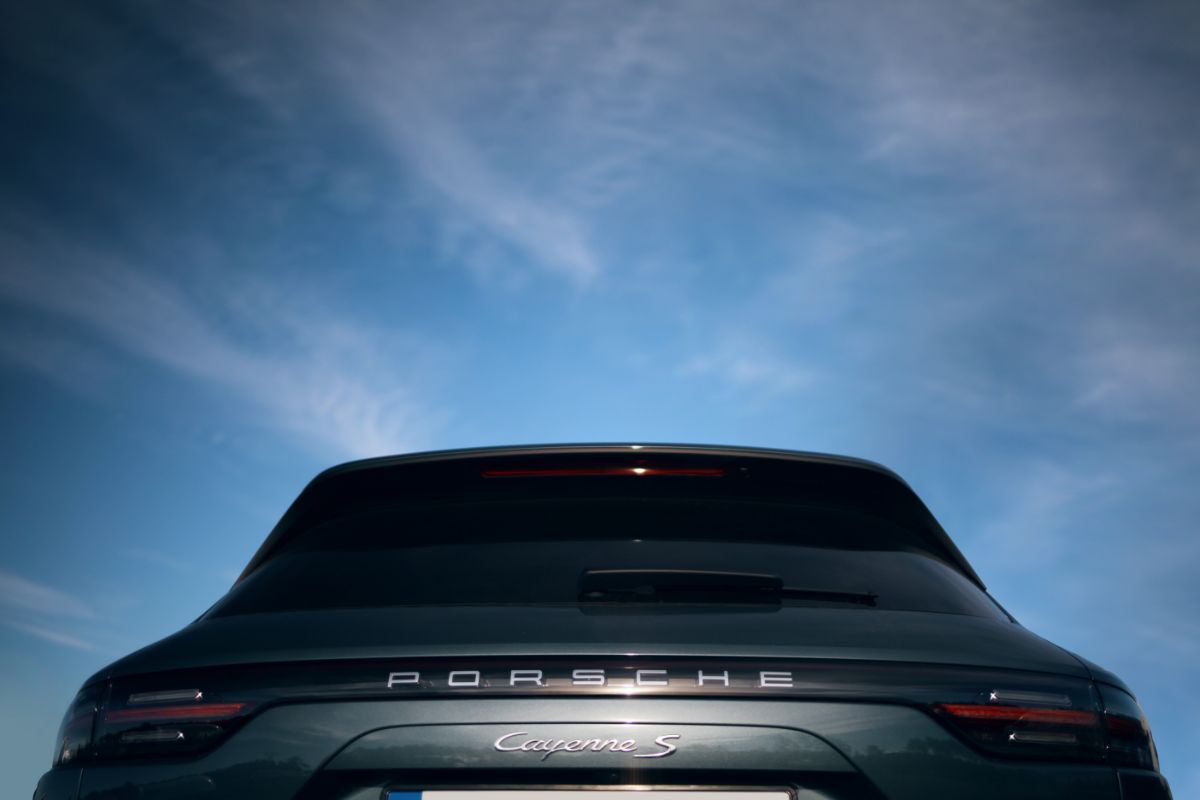 A Porsche of any model is designed for spirited driving. They have racecar DNA that comes through in every model, and the Cayenne is no different, even though it has four doors and ample cargo space.

Like the Macan, the Cayenne is equipped with adaptive all-wheel drive, designed to keep your Porsche on the road unless you take it off the beaten path. Because you can, take it off the road, if you wish. The ground clearance provided by the air ride system, and its natural high stance, give you an SUV that is reasonably competent on the trail.

The Porsche Cayenne powertrains are fantastic; even the slowest model is faster than most other SUVs with which it competes.

Reliability of the Porsche Cayenne 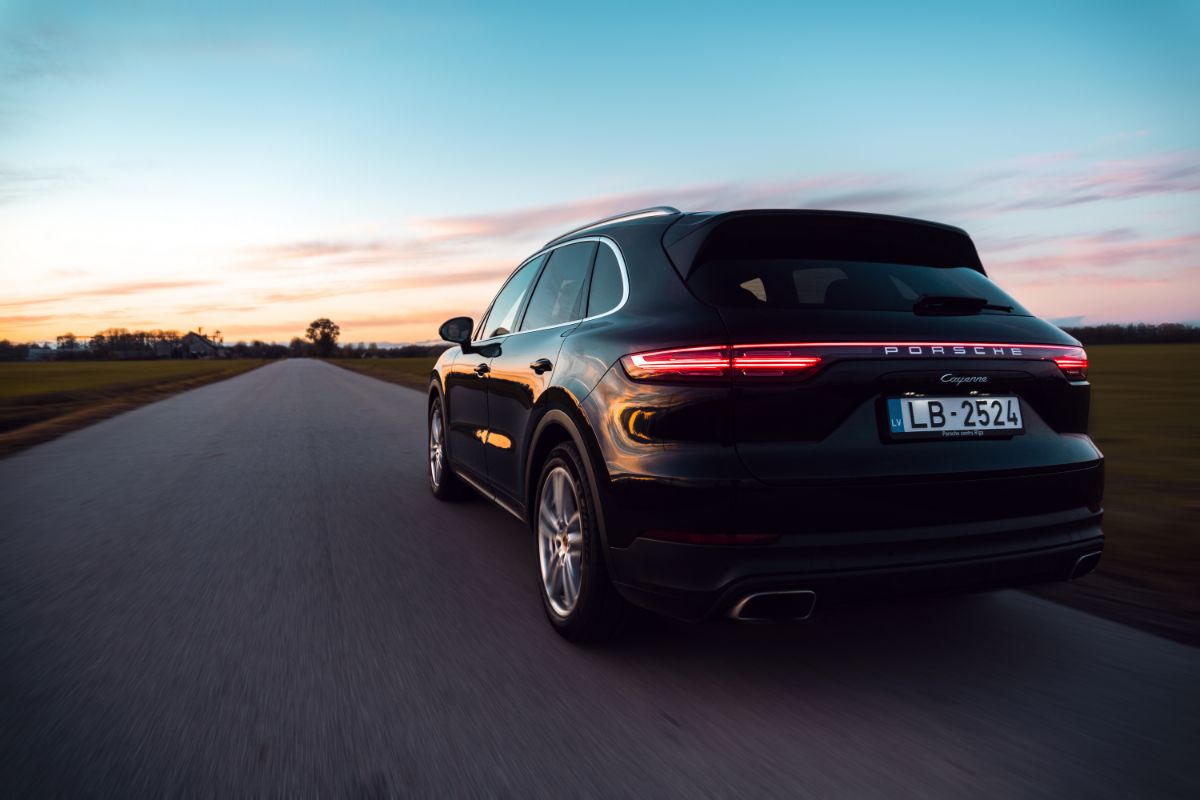 J.D. Powers gives the Porsche Cayenne an excellent score for reliability, with a critic rating of 9.7. Not bad for an SUV that yearns to be a race car.

Cost to own a Porsche Cayenne, yearly

Like its smaller sibling, the Cayenne holds about 47 percent of its original value after five years. That is far greater retention of value than many other SUVs.

Similarities and differences between the Porsche Macan and Cayenne

The most significant similarity between the Porsche Macan and the Cayenne is their apparent relation to the Porsche 911 and Panamera, their four-door sports sedan. However, an essential difference is the price of the Cayenne in comparison to the Macan.

You can buy two Macans for the price of one Cayenne and have twice the fun. Other than that, their similarities are the engines they use, except for the absence of the V8 for the Macan. Their drivetrains are also similar, and all Cayenne’s and Macan’s come standard with Porsches active all-wheel drive.

Safety features, such as lane-change warning, auto-braking, and an extensive array of items in the Porsches suite of electronics, are standard on the Macan and Cayenne.

What is active all-wheel drive on the Porsche Macan and Cayenne? 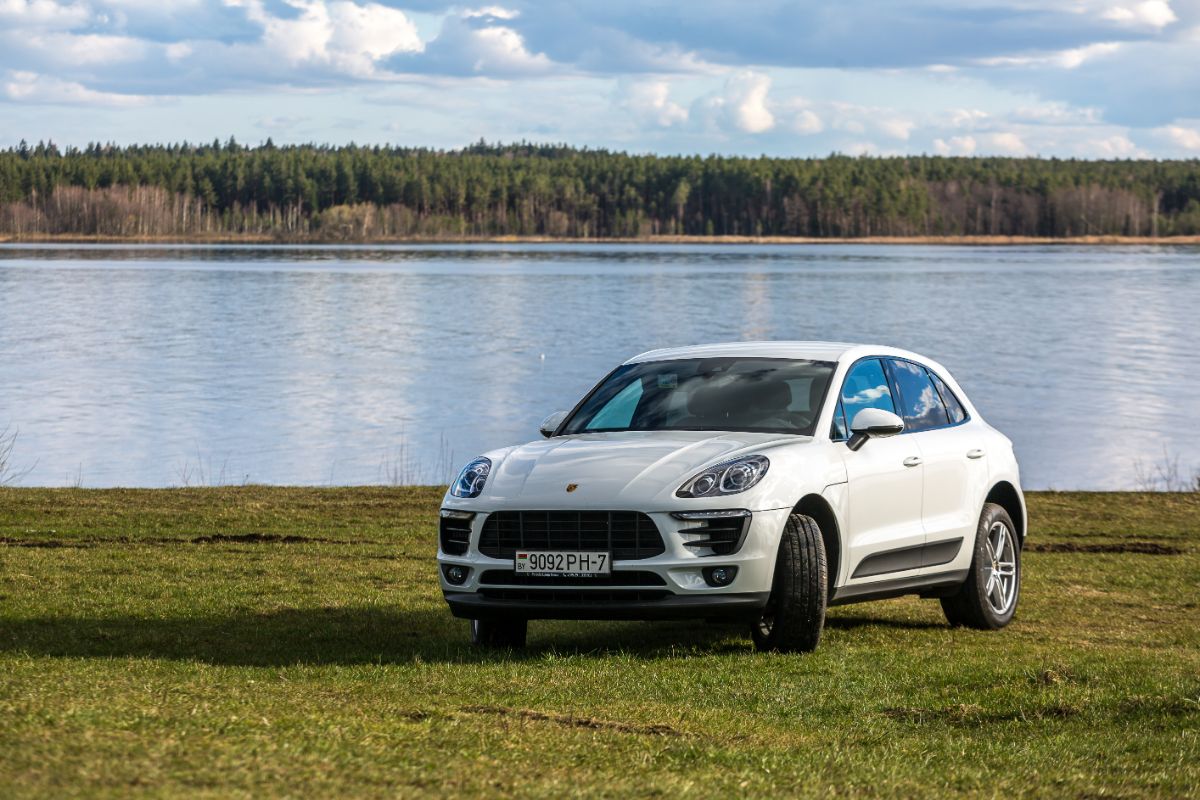 The Active Porsche Traction Management (PTM) is a standard feature on the Macan and the Cayenne. This system is designed to manage your all-wheel-drive system and send power to the wheel that needs it.

This system monitors driving conditions continually and adjusts the drivetrain accordingly. So, although the Cayenne and Macan are great in the city, they have the power and agility to go off-road when necessary.

When you add the offroad package, Porsche will add components to your vehicle to protect your SUV’s underside from rocks and brush. It will also add a tougher persona to your vehicle, making it look more outdoorsy than urban.

Let me put it this way; I would gladly take either model of the Porsche. The Cayenne has more room for passengers and cargo; however, the Macan is easier to park. If you are alone more often than you’re not, or you generally only carry two passengers, the lower cost and smaller size of the Macan may be suitable for you.

However, my favorite is still the Cayenne. Even though  I don’t need an SUV like the Cayenne, or a V8, I have come close to buying one several times because the need has nothing to do with wanting an SUV like the Cayenne. Because I find an SUV with the performance of a sports car and the utility of an SUV to be a very appealing combination, I can understand the appeal to many other drivers.