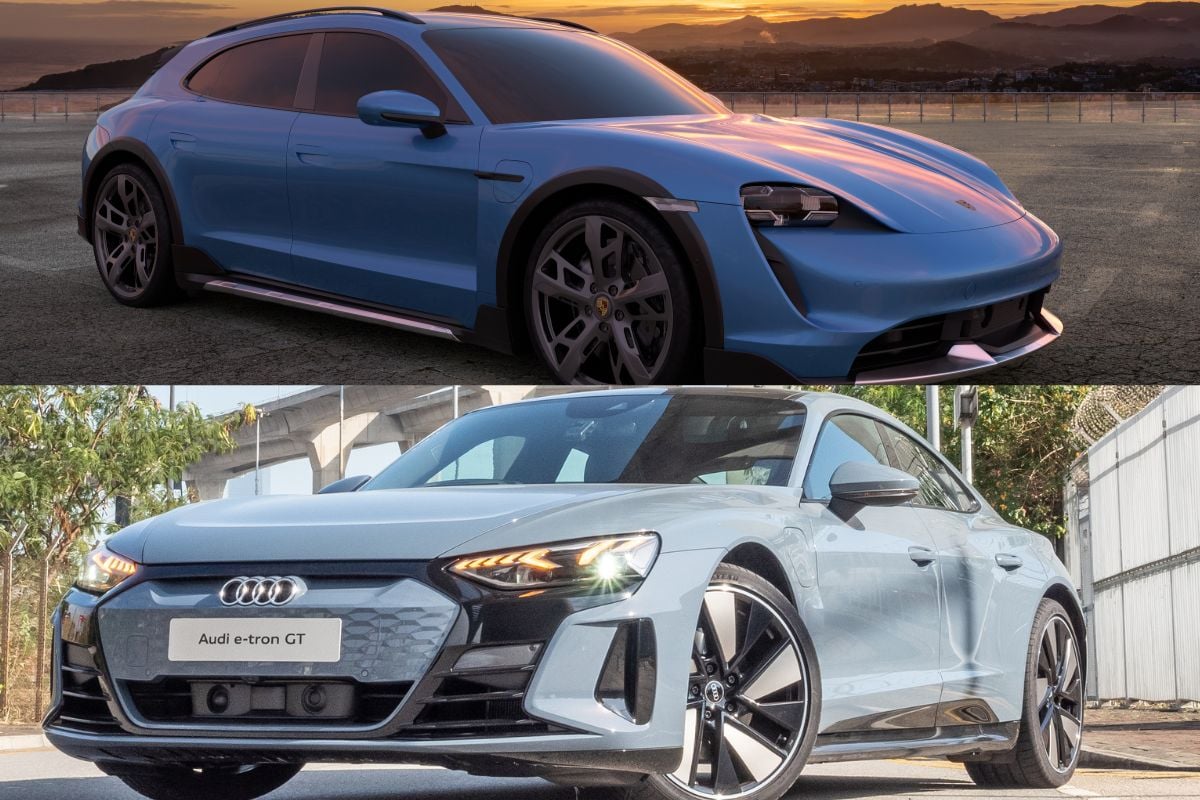 Both the Porsche Taycan and Audi GT are great cars that sports car fanatics go after. However, these all-electric sports cars have their similarities and differences, as well as their pros and cons, which we’ve looked at in-depth for you. Keep reading to help make an informed decision about which car better suits your needs.

The last option is the Porsche Taycan, a fully electric sports car. The automobile is on par with a work of art in significance. Porsche’s first attempt at producing an electric vehicle has been wildly successful.

Stylish and sporty, the Taycan is a dynamically designed vehicle. The vehicle can travel just around 200 miles before needing to refuel. Aside from that, the car is perfect. In all four versions (Taycan, 4S, GTS, Turbo, plus Turbo S), the top speed is 162 mph. It’s a tight squeeze for the four of you.

The 480-horsepower Taycan can reach 60 mph between 2.6 and 5.1 secs, based on the configuration. Porsche’s typical smoothness and beauty, especially in the quickest and most luxurious Turbo S trim, will be available in the all-electric form as well. If you’re in the market for a flashy luxury sedan but don’t mind parking it close to charging stations, the Porsche Taycan is a great option. 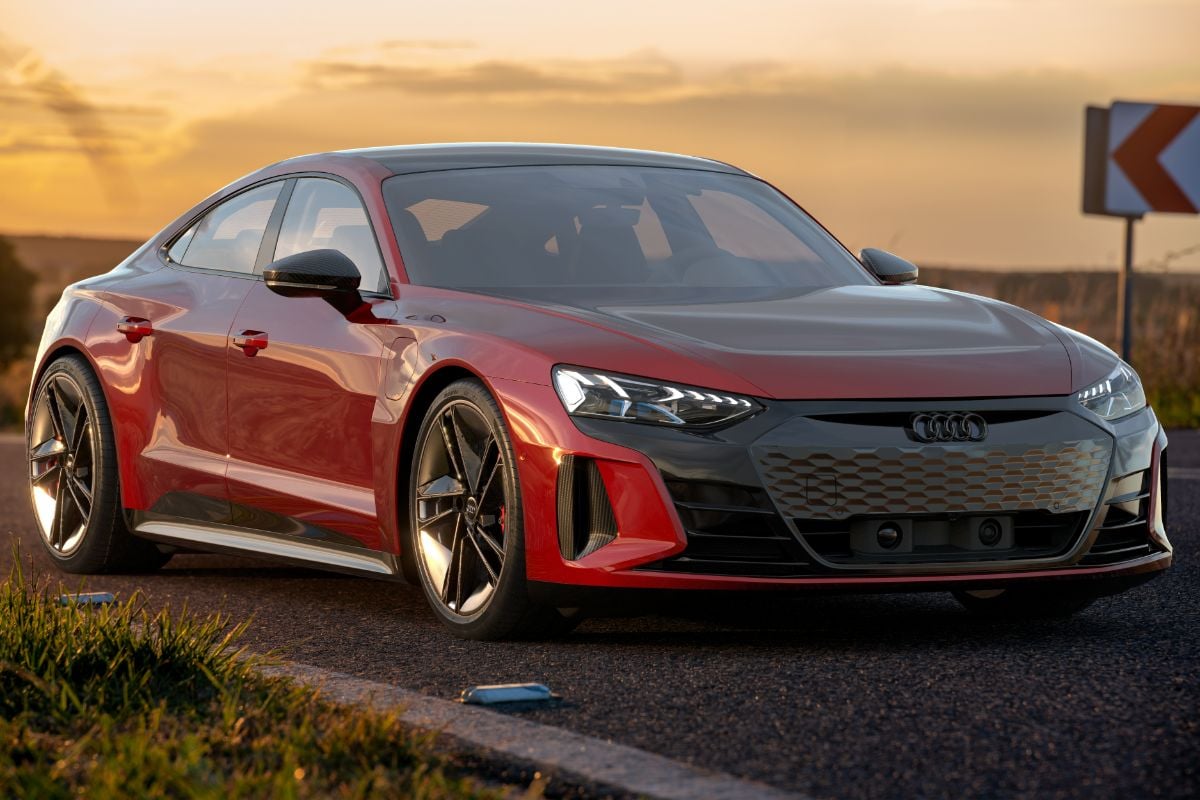 238 miles on a single charge is the EPA rating for the e-Tron GT. 496 horsepower and 464 pound-feet of torque are generated by electric motors on each of the four wheels. 522 and 472 are briefly increased in the vehicle’s Boost Mode.

At $142,400, the RS GT is the most expensive e-Tron model. On a full charge, the EPA estimates a driving distance of 232 miles. 637 hp and 612 lb-ft of torque may be generated by the two electric motors. With the same architecture as its relative, the car can move from 5 percent to 80 percent in 22.5 minutes.

Standard on every e-Tron GT is the blind spot monitoring system, lane departure warning system, and parking alerts, plus Apple, as well as Android audio services, are supported on this just over the 10-inch screen.

The first look is at the battery capacity of both cars, which is 93 kWh. The powerful cars also share a home charging time of approximately 10 hours and require 240V to get them to capacity within that time frame.

The maximum public fast charging power for both the Audi GT and the Porsche Taycan is 270 kW bringing them to 80% in less than 23 minutes. Another major similarity between both vehicles is the BEV warranty offered which is 100 thousand miles or eight years.

In terms of performance, these two beasts can push up to 522 horses when the over boost feature is engaged. They both achieve this on a two-speed transmission. 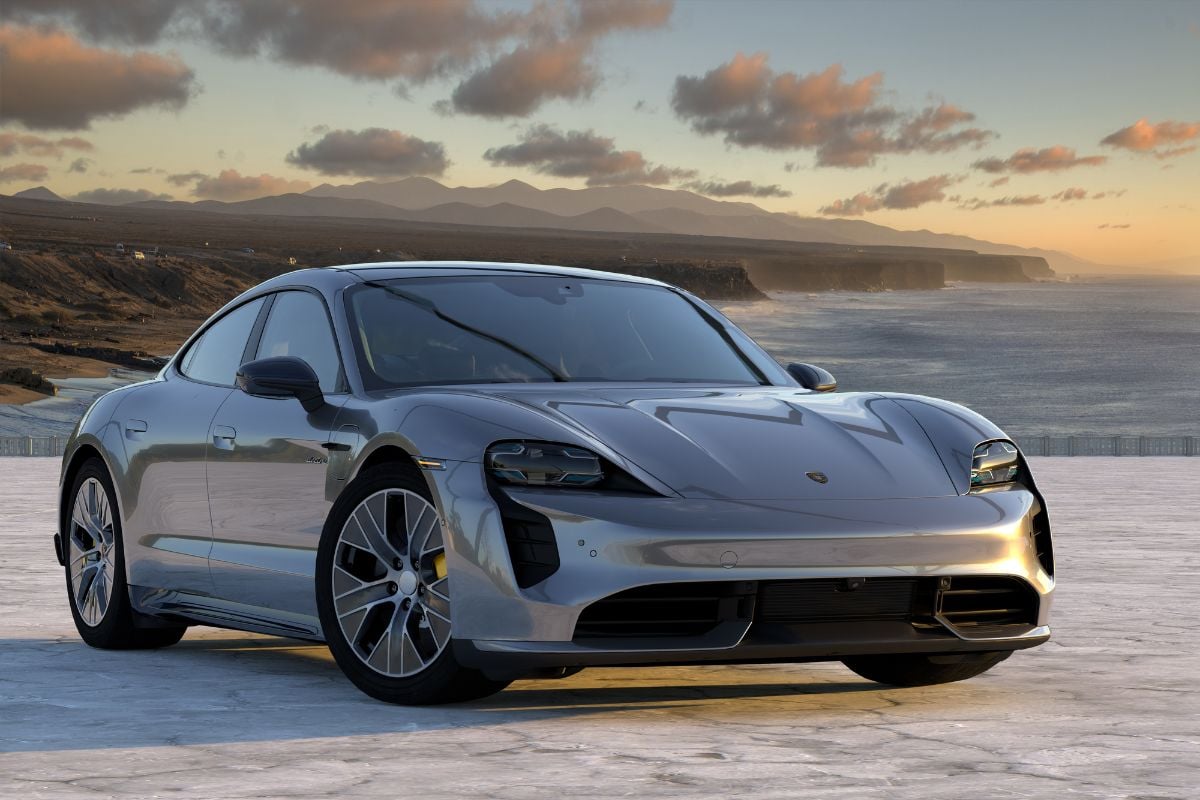 Now here is where things get tricky for these two spectacular cars that may win some and lose other prospective owners. For the Audi GT, the starting price is $102,400 while the sleek Porsche is a little bit steeper at $103, 800 for the basic.

Both utilize different types of motors, with the GT featuring dual permanent magnet e-motors. However, the Taycan employs an AC Permanent Synchronous Motor. While not too far apart in terms of acceleration, the Porsche has an edge from the zero to 60mph stretch. It takes a mere 3.8 seconds compared to Audi GT’s 3.9 seconds. Similarly, in terms of top speed, the

Taycan can take you three miles per hour faster, maxing out at 155mph. The GT takes the cake or rather wins the race with the range as it gets you up to 238 miles. That’s closer to the charging station you might miss with the Taycan’s 227-mile range offering.

When it comes to lighting up the roadway or simply dazzling onlookers, the Audi GT puts on a show with its laser headlights, a feature that the Porsche Taycan doesn’t offer.

Here’s a breakdown of what both vehicles are offering for their high price tags: 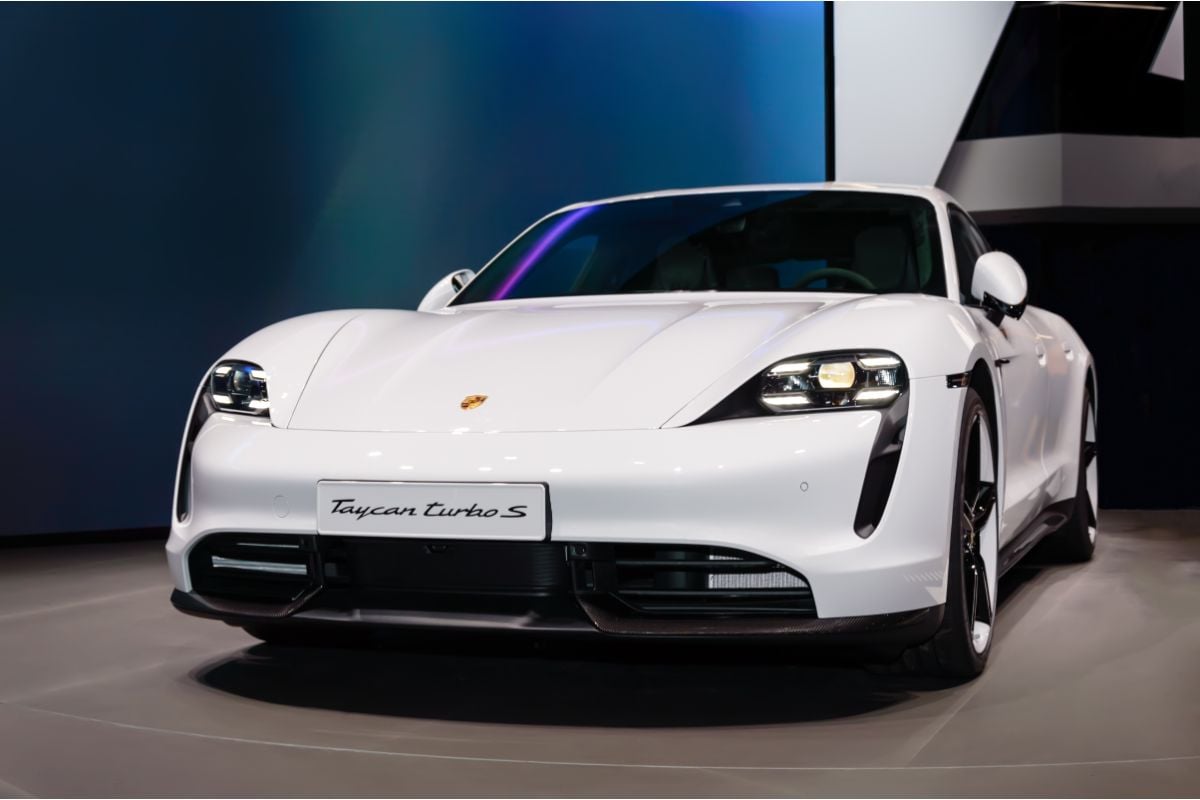 This is an electric vehicle, even though the top models have ridiculous names like Turbo and Turbo S. The front badge tells you exactly what to expect from the product. The Taycan is a high-performance sports car that can reach 750 horsepower in its top trim.

Since the 93.4 kWh Performance Battery Plus is an optional addition, the most a model can travel on a single charge is an approximate 225 miles. The base 79.2 kWh power pack hardly gets most trims to 200 miles.

All other Taycan models are AWD, but the base model, which starts at $82,700, features RWD. However, as you go beyond $100,000, the cost increases dramatically. The top-tier Turbo S begins at about $186,000 before adding any extras. The Taycan’s MSRP exceeds $200,000 with all the bells and whistles. The base price of a Porsche Cross Turismo wagon is around $10,000 more than a standard 911, and the price difference between the two decreases to around $2,500 in the top trim levels.

The cabin is incredibly cutting edge, with numerous digital displays and touchscreens for virtually all of the controls. The car offers supportive front seats, and we can adjust them up to 18 ways with power. The Taycan can accommodate up to four people because of its modest but available center seat. There are 14.3 usable cubic feet in the trunk, and because it has no front engine, an additional 2.8 cubic feet are accessible in its “frunk.”

GPS and Apple CarPlay are standard equipment. In 2022, Android Auto is included in the updates. Lane-keeping assists, frontal collision warning with back and front parking sensors, and automated emergency braking are all included as basic safety aspects. There are a lot of choices, but they soon drive up the price. 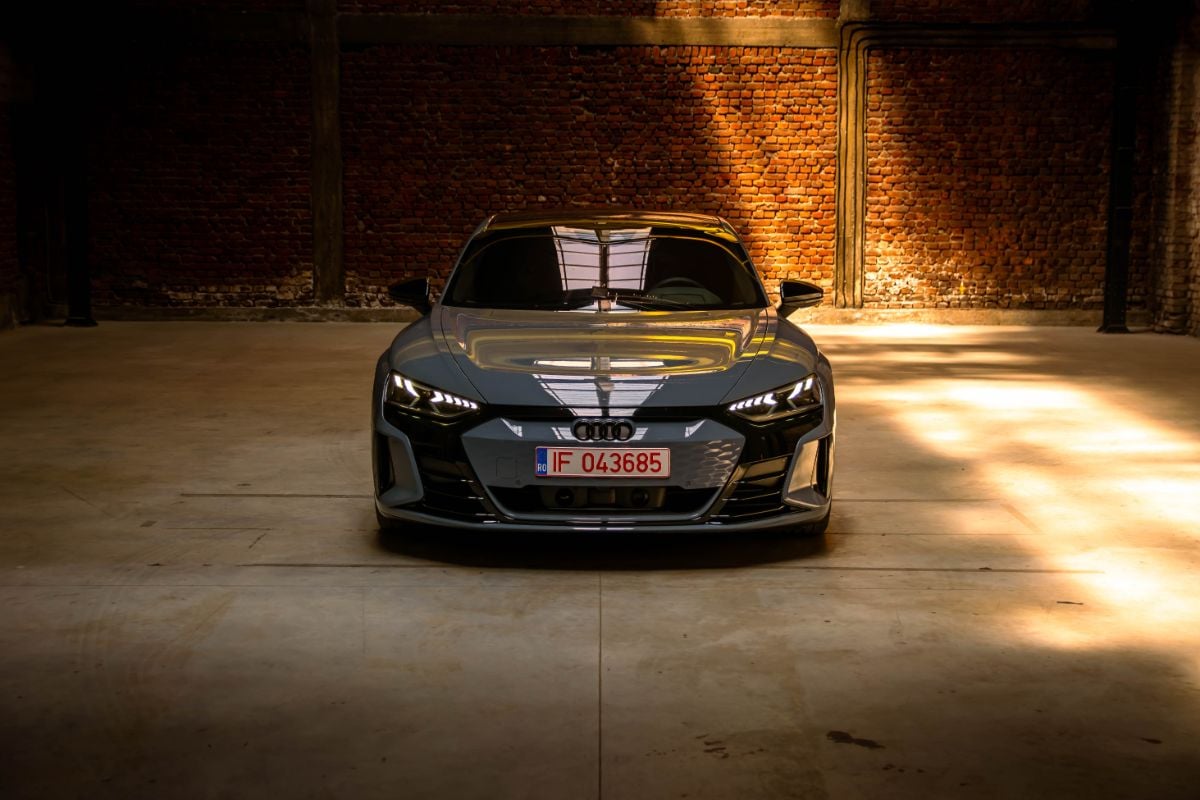 The 2022 Audi e-Tron GT, the latest member of Audi’s fast-growing EV fleet, is both stylish and cutting-edge. The e-Tron GT is not just a sight to behold, but also a speed monster; even the entry-level trim (if we can refer to a $100,000 car as such) generates 522 hp. The RS also produces a hair-blowing 637 lb-ft of torque.

The GT is built on the same platform as the Porsche Taycan, so it’s lower to the ground and handles curve flat thanks to the all-wheel, -drive capability and an adjustable rear suspension. However, the e-Tron GT, like the Taycan, gives up range for performance, with an EPA-estimated 238 miles. That’s fine for the occasional drive, plus a fast charger could get it back up to 80% in around 20 minutes, but several cheaper EVs can match or beat its range and charging speed.

A touchscreen, a digital display, heated front seats, and walnut inlays, make the e-Tron GT’s interior particularly pleasant. The e-Tron GT’s middle seat is fine for a child or an infant, but it’s designed for two adults in the back.

Front seats that are ventilated, as well as Nappa leather and other luxury materials, are available as upgrades. The RS starts at about $140,000, but it has a more powerful engine plus extra carbon fiber for improved execution.

How Durable is the Porsche Taycan? 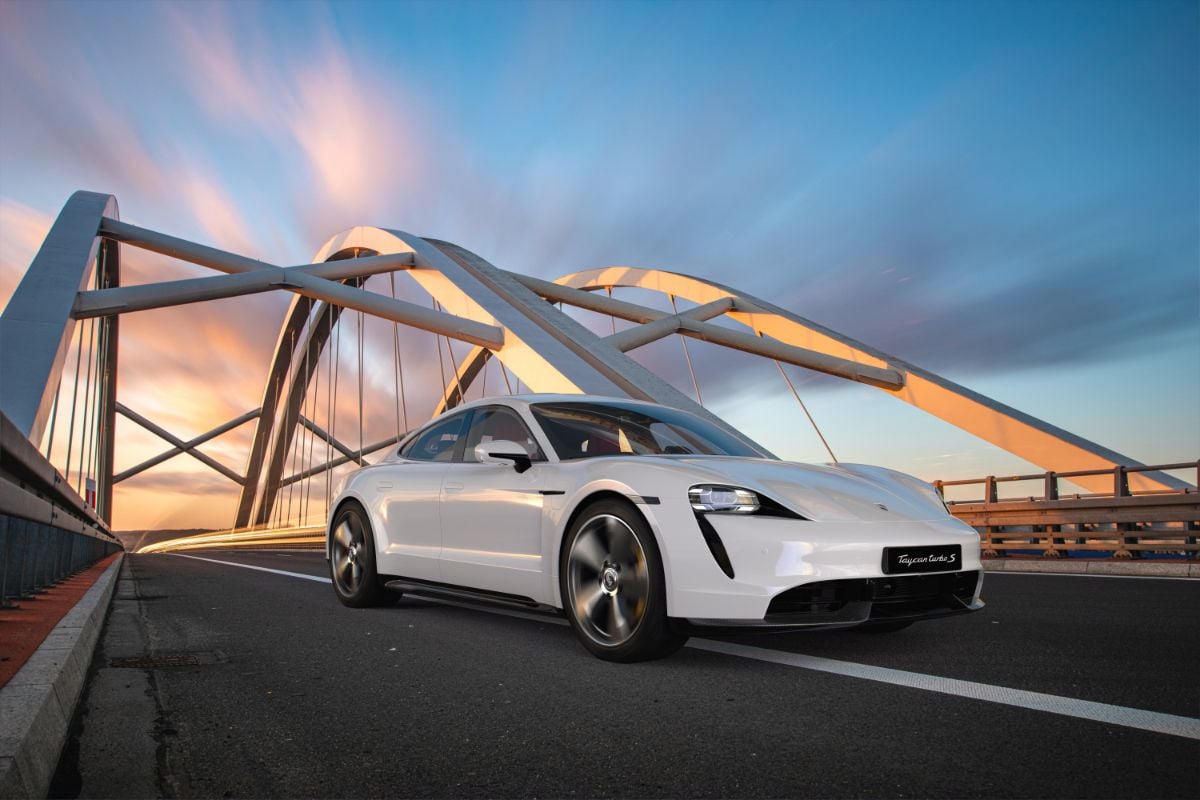 The Porsche Taycan is expected to have a long service life between 300 thousand and 400 thousand kilometers with minimal upkeep. The Taycan’s battery will easily last between 10 and 15 years under regular driving circumstances.

Since its electric engine is substantially simpler as well as needs way less upkeep, the Taycan should live even longer than Porsches with ICEs. The Porsche Taycan’s estimated lifespan is mainly dictated by the battery’s durability, as is the case with all other electric vehicles.

Batteries deteriorate with time and with repeated charging cycles. If you fully charge and discharge a battery once, you will have used up its full capacity. Porsche claims that the Taycan can travel 225 miles on a single charge and that it can recharge its battery 1,500 times before needing to be replaced.

Given that several EV batteries might endure over 4,000 full charges in the research facility and the Taycan could also travel up to 280 miles in the normal world, this is a realistic figure.

How Durable is the Audi E-Tron GT? 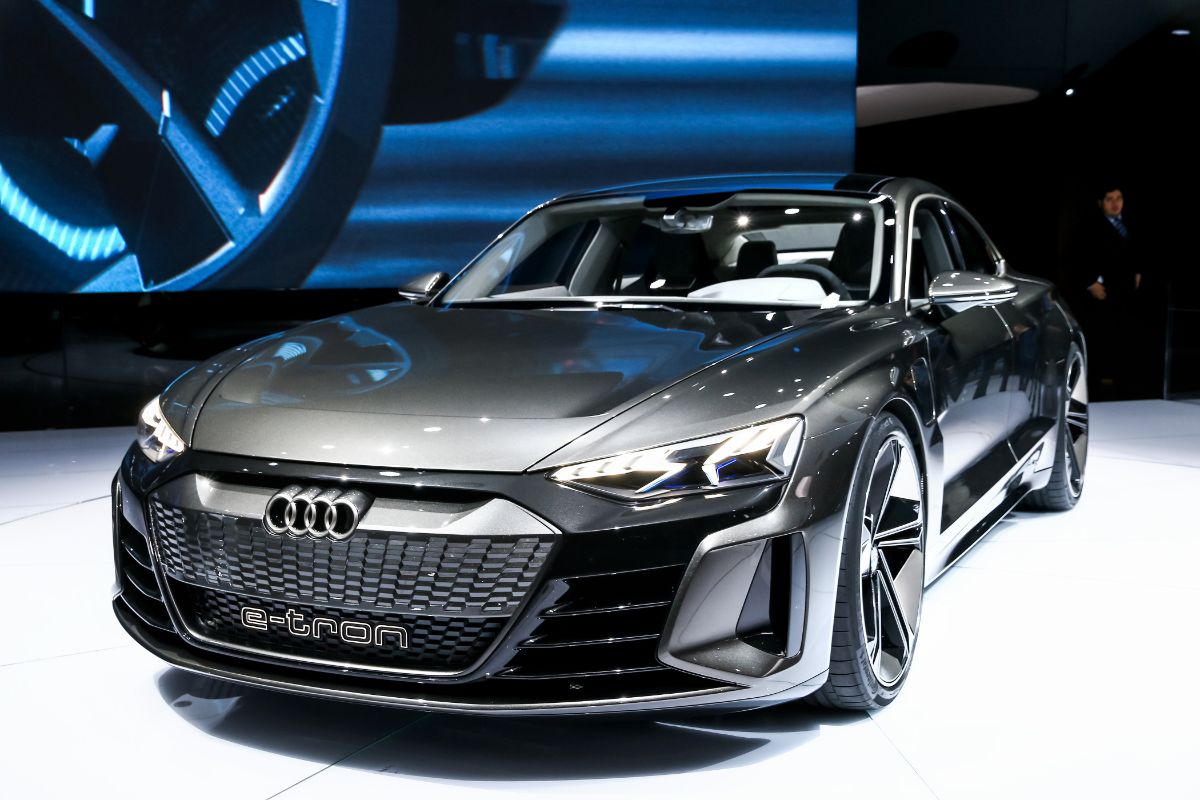 Given its sizable battery and projected range of approximately 220 miles on one charge, the Audi e-Tron is expected to last between 300,000 and 400,000 kilometers. If you drive around 15,000 miles each year on average, your battery should last you between 10 and 15 years before it needs to be replaced.

Since the Audi e-Tron has merely been on the market for a few years, there aren’t many worn-out vehicles just yet. However, many ecstatic owners have logged well over 50,000 miles on their vehicles with no serious complaints, and that includes the electric engine.

Batteries are highly expensive to replace, therefore their useful life duration typically determines how long an EV will last.

The capacity of lithium-ion batteries degrades with time and with repeated charging cycles.

One definition of a charge cycle is the act of properly charging but then discharging a battery.

Each charge cycle is defined as the sum of all charges and discharges that bring the battery to full capacity.

Considering EV batteries are typically guaranteed for no less than 1,500 charge cycles, we may fairly calculate that the Audi e-Tron will last between 300,000 and 400,000 kilometers.

Because batteries made of lithium-ion degrade gradually over time, we should expect the e-Tron battery to last for about 10–15 years until they stop functioning properly.

Audi E-Tron GT vs Porsche Taycan: Which Should I Choose?

It’s no surprise that Porsche’s 2022 Taycan is thrilling, given the brand’s history of producing high-performance vehicles. The Taycan is a terrific sports EV if you can live with its limited range and can’t live without the feel and amazing punch of a Porsche.

A 2022 Audi e-Tron GT, which shares an identical platform, might be a more complete package in terms of both comfort and performance. There is no base model, although the top-tier RS is much faster and cheaper than the premium Taycan.