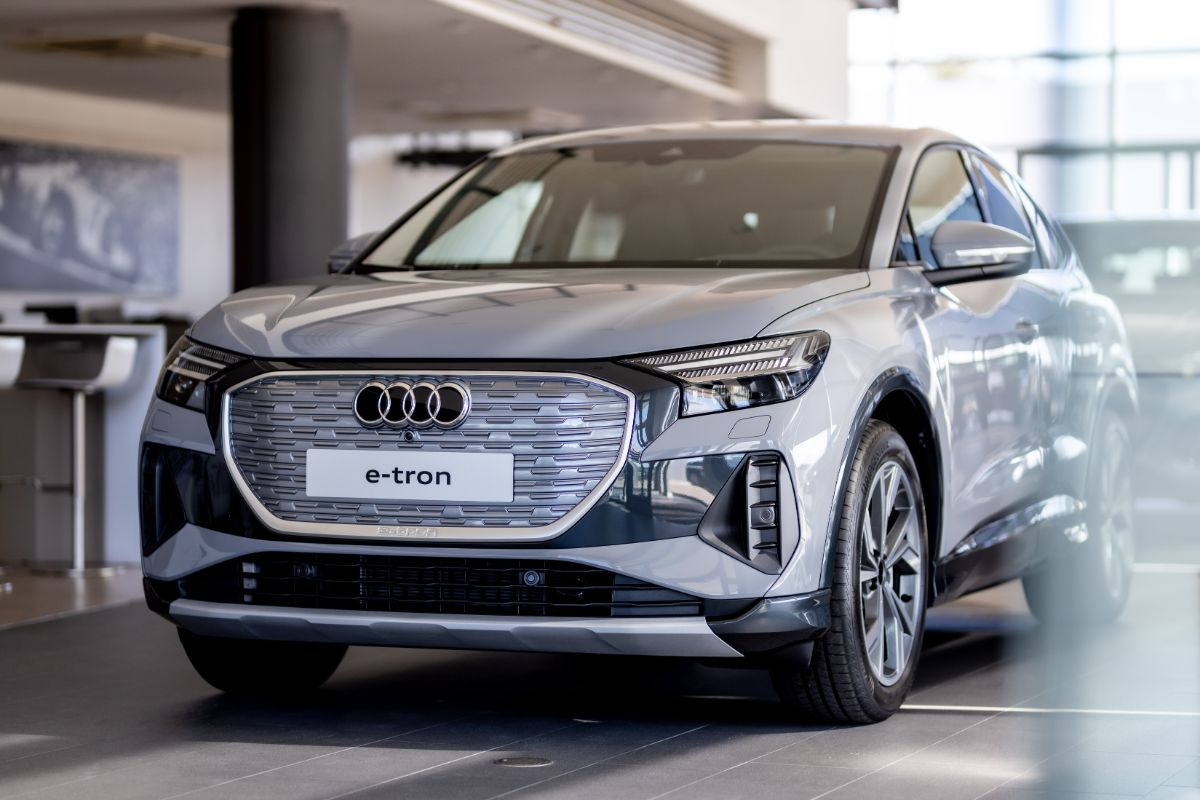 Auto manufacturers can make electric vehicles with manual transmission and have already begun doing so. While not many have jumped at the opportunity, two are already on the market, one has shown a prototype and another is seeking a patent. That means things are looking up for EV stick shifts.

We like to eat our cake and have it as manual drivers. Having an electric car but still being able to handle it the way we desire is not too much to ask for, right? Well, so far, Porsche, Audi, and Ford(somewhat) have agreed.

They’ve made some expensive versions of stick shift electric cars, and that gives us hope that there will be more soon. Continue reading as we explain more from our research, about manual EVs and who is making them. 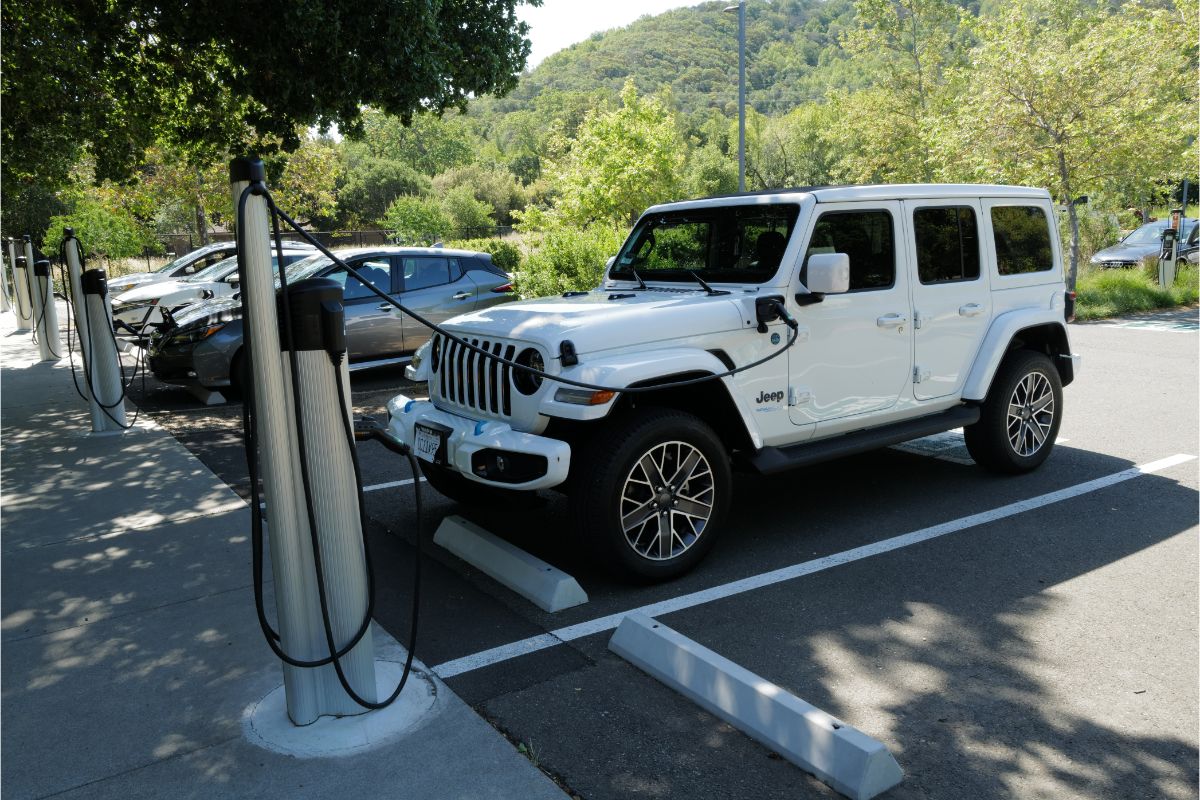 While it is not yet anywhere near popular, some automakers have grasped the idea of making manual versions of their electric vehicles.

The first option cuts deep in the pocket and is only available to the Uber rich for now. That’s the Porsche Taycan Turbo S Cross Turismo which starts at a whopping price tag of $187,600.  It offers a rear axle two-speed transmission.

Meanwhile, over at Audi, the 2022 E-Tron GT starts at 106,395 dollars. The Audi all-electric vehicle comes with a starting price of just over a hundred thousand dollars. What it offers is a two-speed automated manual real axle transmission.

A patent for an all-electric car that mimics the operation of a clutch and gearbox was submitted by Toyota in 2022. The concept Toyota Sports EV mimics the feel of a manual gearbox by including a “clutch,” “stick,” and “three-mode” selection. Industry experts say the electric motor in the concept car will never stall, unlike the gas engine in a regular car.

An electric Jeep Wrangler SUV is awaited by off-road buffs. Kelley Blue Book predicts that in around three years, the future Jeep Magneto with a six-speed manual transmission will roll off manufacturing lines, providing the most genuine feel of any present EV.

Back in 2019 at the Las Vegas Specialty Equipment Market Association (SEMA) trade event, Ford unveiled a prototype electric Mustang equipped with a six-speed manual transmission. Showgoers were wowed by the electric “Mustang Lithium”. It is not yet clear when Ford will hit the ground running with this widely anticipated car, which will hit the others outside of the ballpark.

An electric Jeep Wrangler SUV is also anticipated by off-road fans. Kelley Blue Book predicts that in around three years, the future Jeep Magneto with a six-speed manual transmission will roll off manufacturing lines, providing the most genuine sensation of any EV now available. 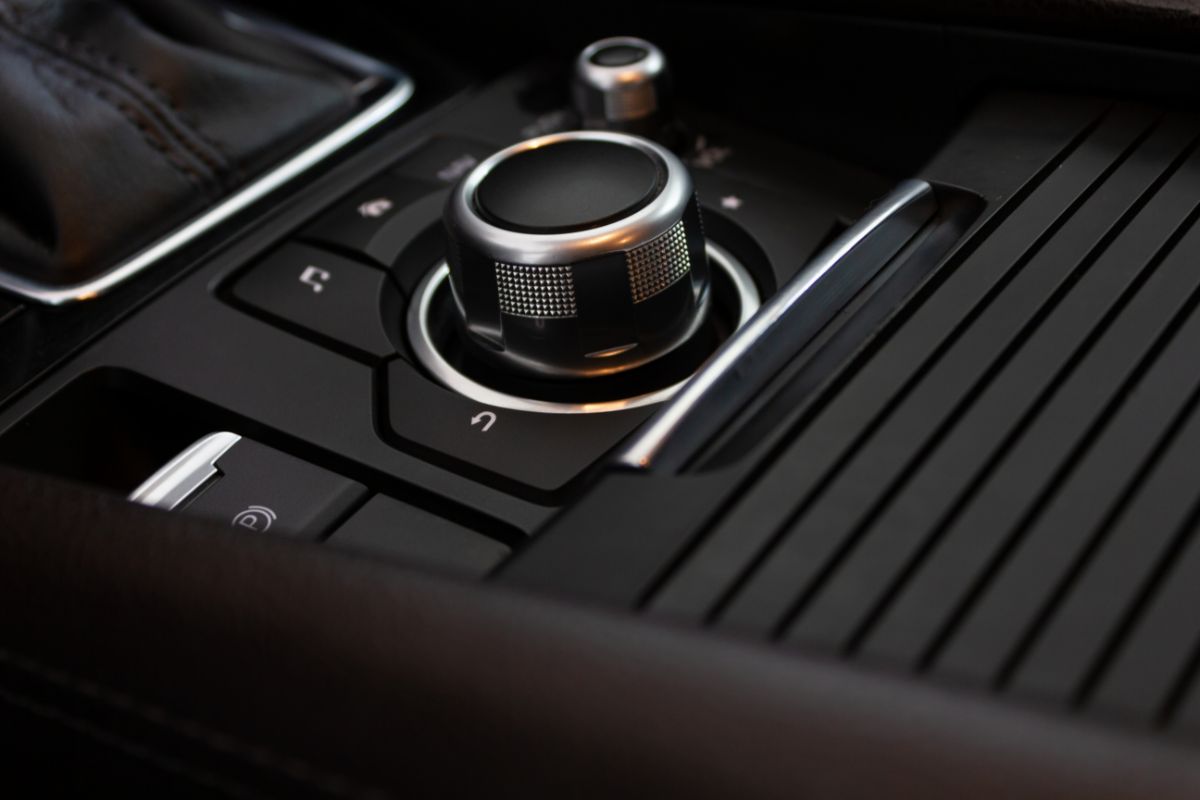 Why are Manual Transmissions Better?

Back in 2017, when internal combustion engines ruled the road, TREMEC, a gearbox manufacturer, listed various advantages of manual transmissions.

First, anyone can get behind the wheel of an automatic. While this may be true of manual transmissions, it is not so with a clutch and gear change. Driving enthusiasts can display their expertise and attention to detail on the road by choosing a manual transmission.

Having the ability to operate a manual transmission opens up a wide variety of vehicle options, from motorcycles to farm tractors. A driver who is proficient with the clutch and gear shifts will be able to operate nearly any vehicle.

Third, vehicles with stick shifts are proven to get stolen less than automatic vehicles. These types of cars are stolen way less since so few people can drive them. Car thieves are “simply not that speedy,” according to research, so they avoid automobiles with a clutch pedal and gear change since they are more difficult to steal. One other advantage of owning a vehicle with a manual gearbox is that it is less likely to get acquired.

The bright future of EVs with stick shifts

Automatic transmissions are often regarded as the standard in modern vehicles. It is yet to be seen if many drivers want the retro experience of a clutch to justify the widespread manufacture of EVs with manual transmissions.

What Kind of Pedals Do Electric Vehicles Have? 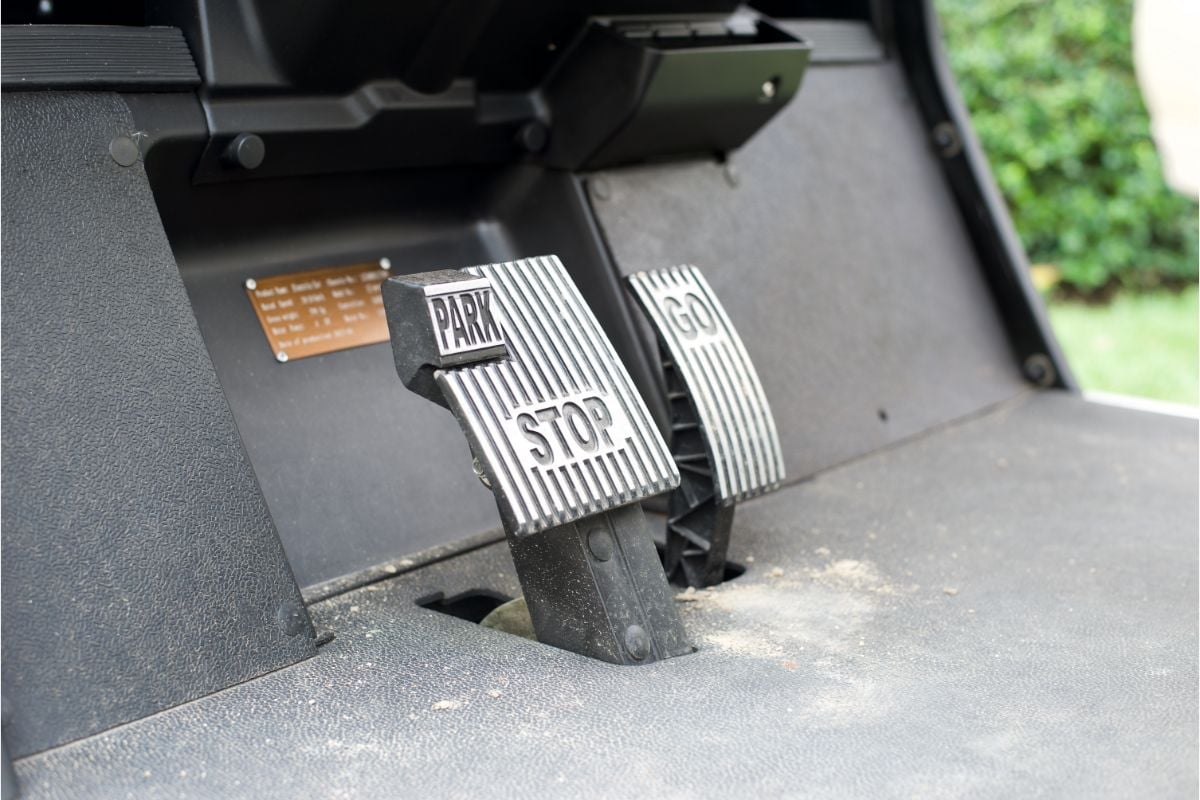 The typical electric vehicle has only the braking and acceleration pedals.

The ability to drive with only one pedal is a significant benefit of EVs. With this, taking your foot off the pedal will cause the vehicle to slow down. The vast majority of plug-in hybrids are operated with a single pedal and rely on regenerative braking (discussed below).

How does it function, then? Let’s check it out.

With the use of only one pedal, drivers can come to a full stop without ever touching the brakes. Taking their foot away from the gas pedal is OK. After that, the EV begins to slow down at a rate of roughly 0.2 g.

The vehicle’s speed is reduced by an amount equivalent to 20% of its entire braking power. After a full collapse, the brakes lock to keep the automobile in place.

It takes some time and practice to drive with only one pedal. Drivers will need to train themselves to ease off the gas gradually. The release of the brake pedal should also be timed for the halting distance.

Do not use the brake pedal only in the event of an emergency. This is merely a practical addition that can be used to power the vehicle when it is parked.

Why is Toyota Pursuing a Sports Electric Manual Transmission Car? 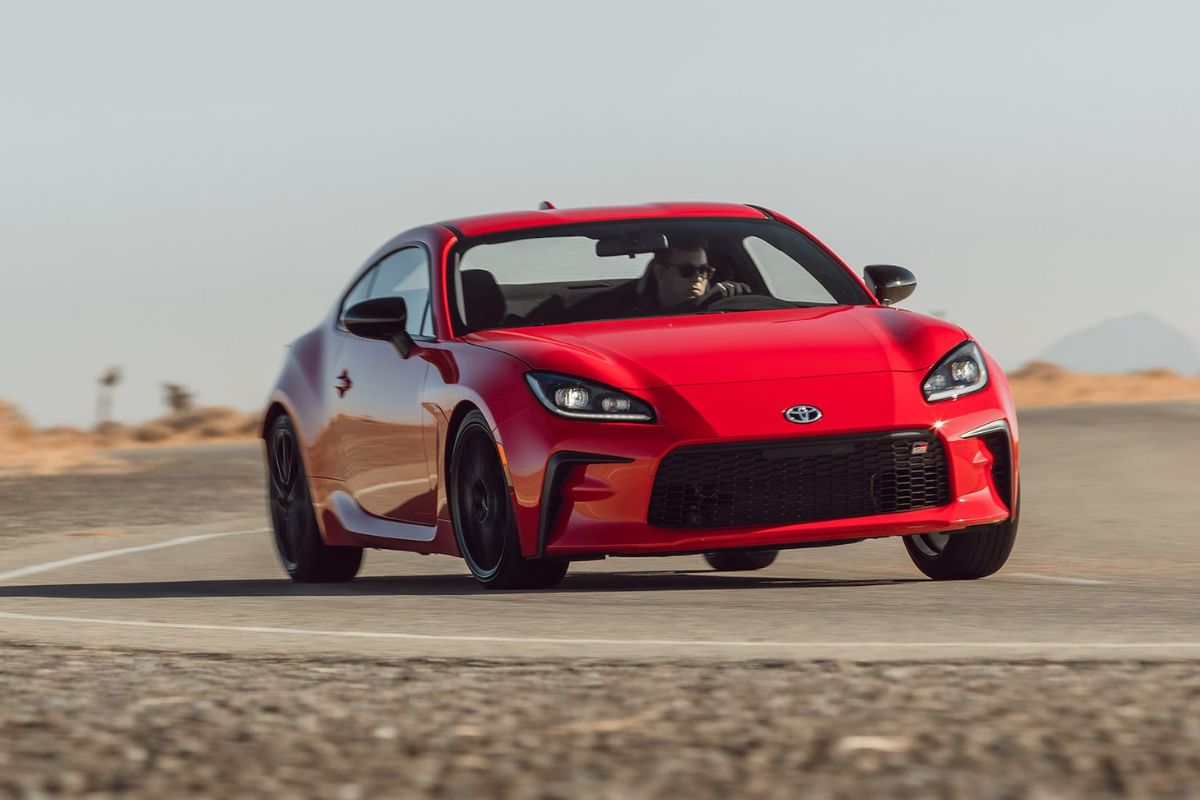 To avoid a stalled gas engine, an EV like Toyota’s forthcoming “Sports EV” does away with the need for a traditional internal combustion engine. To prevent the engine from stalling and, of course, to change gears, this is what the clutch and transmission were originally designed for. Why would Toyota put this on a car that has no gears and likely has instantaneous torque when it’s needed?

A method that utilizes a phony clutch, fake shifter, a three-mode selection, plus setting at the controller to imitate the feel of operating a manual transmission—without the stalling—is described in a patent submitted by the Japanese brand in 2021 and then posted in February 2022.

So, how exactly does it operate, according to the patent? To mimic the torque sensation of each gear, the potential EV’s motor controller will raise or decrease the voltage, affecting the magnetic field driving the motor’s rotor. The patent describes three possible implementations.

That’s how both “clutch”, as well as “no-clutch” settings, work, at least according to the patent filings we’ve seen so far. A clutch is used on some electric vehicles to disengage the permanent-magnet motor and allow it to sit at rest when it is not in use. But that’s not what’s being controlled by this setting. The third mode is fully automatic, functioning like a conventional EV with no need for the driver to touch the clutch pedal or shifter at all.