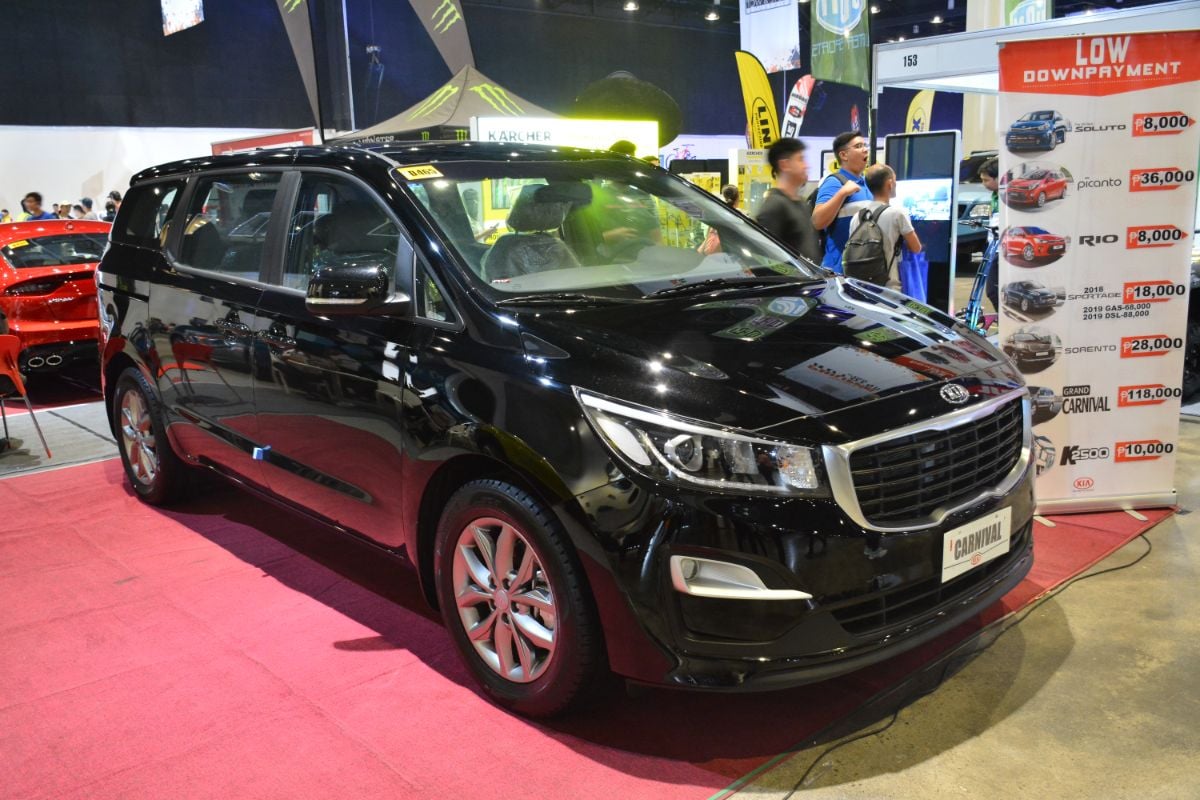 You probably know too many people to count who swore off minivans, only to end up owning a minivan some years later. My favorite sticker I’ve ever seen on a minivan said, “I used to be cool.”

Minivans have come a long way since my mom drove her GM Astro Van in the late 1990s. One of the newest models is the Kia Carnival minivan. I especially love it because it looks more like an SUV.

There are many cars similar to the Kia Carnival, and my three favorites would have to be the Chrysler Pacifica EV, the Toyota Sienna, and the Jeep Grand Wagoneer. The Pacifica EV and the Sienna are two of the best minivans on the market today.

The Pacifica comes in a hybrid option, making it incredibly fuel efficient. The Sienna is a beautiful minivan with plenty of upgrades to make you feel like you’re “momming” in class.

The Grand Wagoneer is not a minivan, but its spacious and sexy; it seems to be the car of the moment––at least according to all the influencers I see driving it on Instagram.

Keep reading to see the full list of cars similar to the Kia Carnival, including more specs and details on my three favorites! 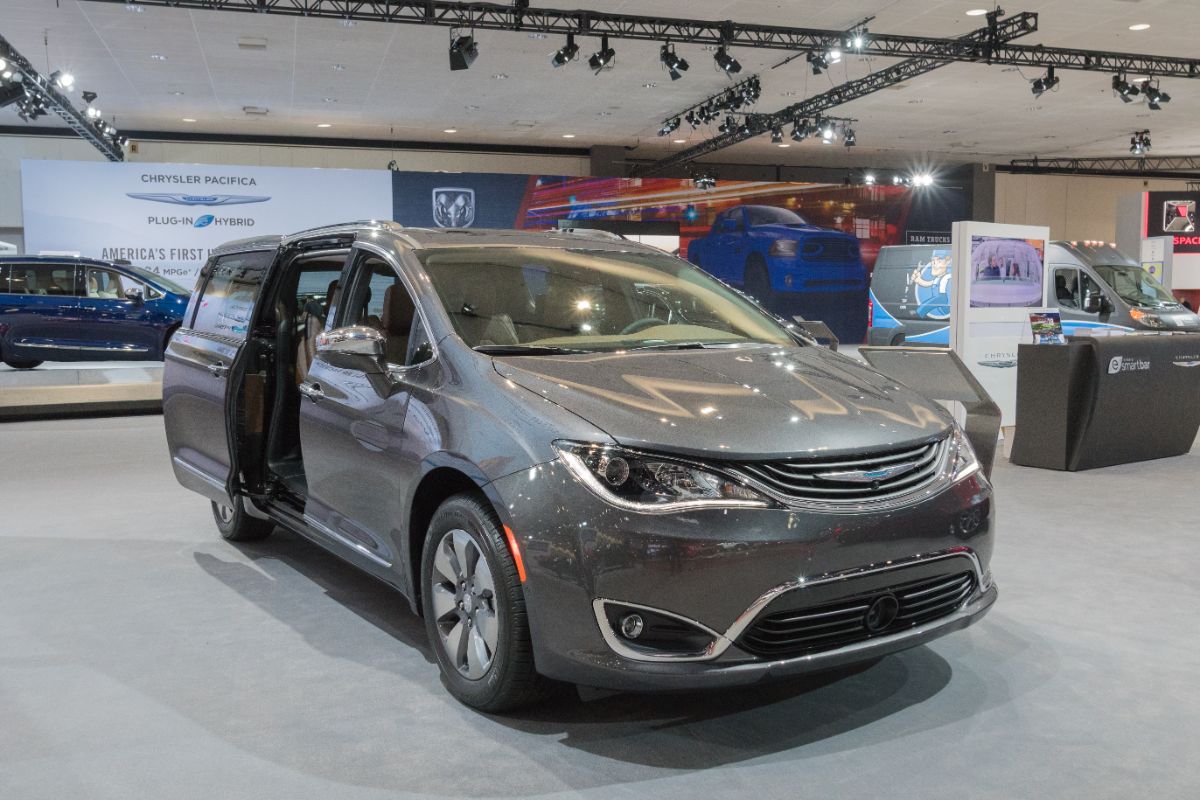 Another minivan option, the Chrysler Pacifica EV is probably the most mainstream minivan that’s available as a hybrid option. Starting at $49,000, its exterior is a bit edgier than previous years’ models.

The interior is beautifully designed with a clean and modern dashboard, and beautiful leather trim options for the 7-passenger seating configuration. 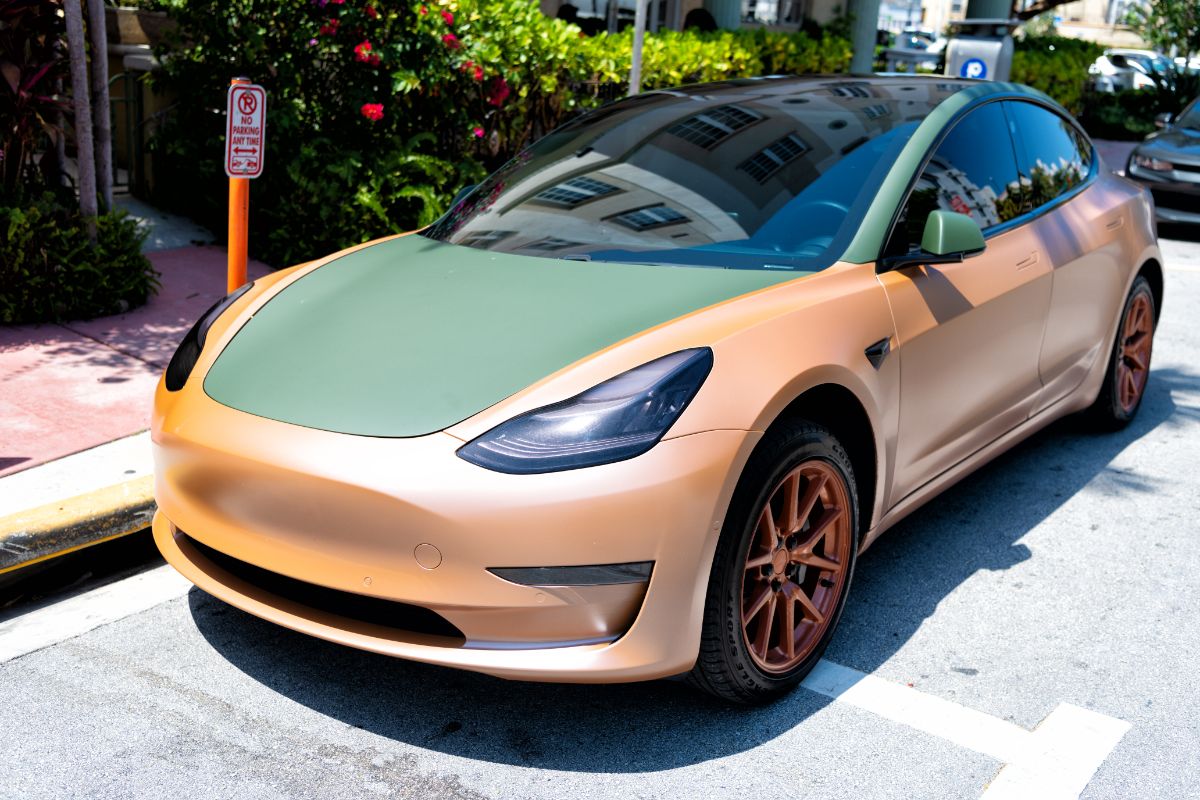 The Tesla Model Y is the SUV option offered by Tesla. The Tesla Y does not look like a minivan, but it has three rows and seats 7, similar to the Kia Carnival (although the carnival has higher seating configurations available).

It starts at $62,990+ MSRP so it is pricier than most of the minivans  I’ve listed here. It zips from 0 to 60 in just 4.4 seconds, which is much faster than the average minivan! 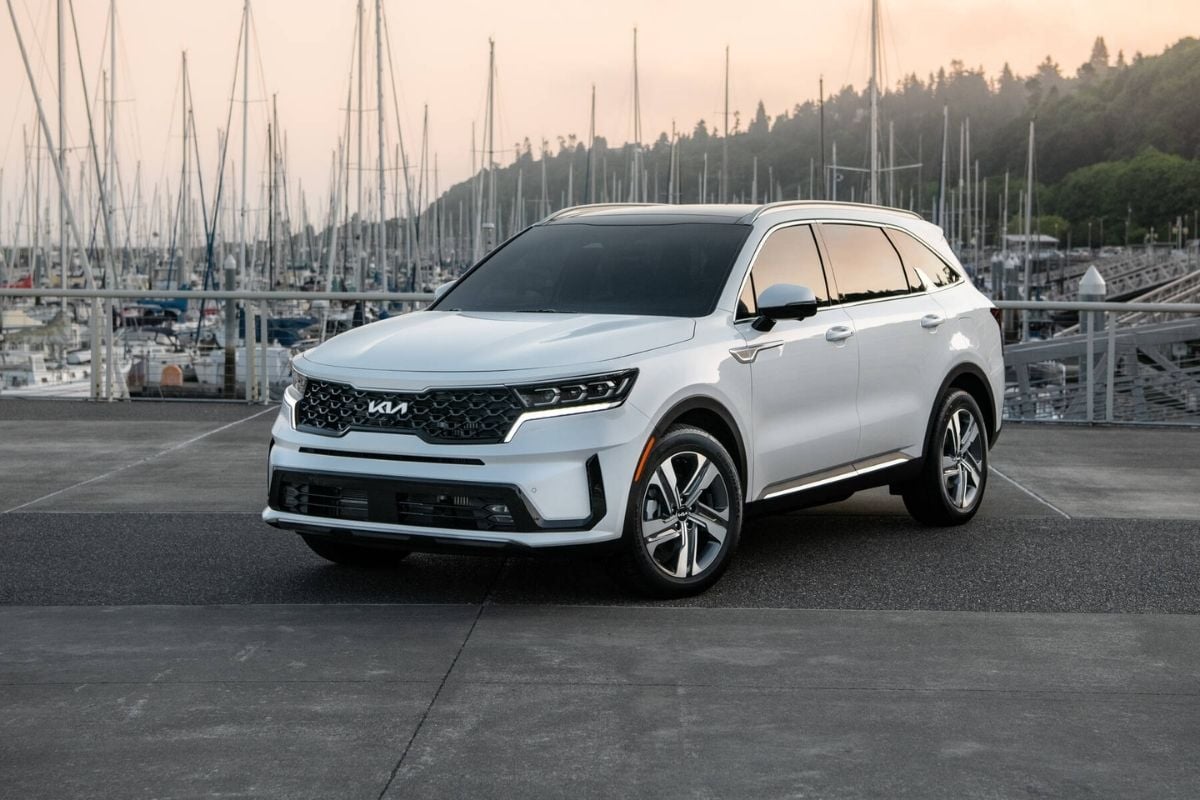 This is another hybrid option that’s not quite a minivan, but it serves the same purpose on most fronts. The Sorento PHEV is the same brand as the Carnival, so you can expect many of the same tech and safety features.

This newcomer seats up to 7 passengers and has that same sporty feel as the Carnival. However, it’s a true SUV and not a minivan. So if sliding doors are important to you, stick with the Carnival or something similar. 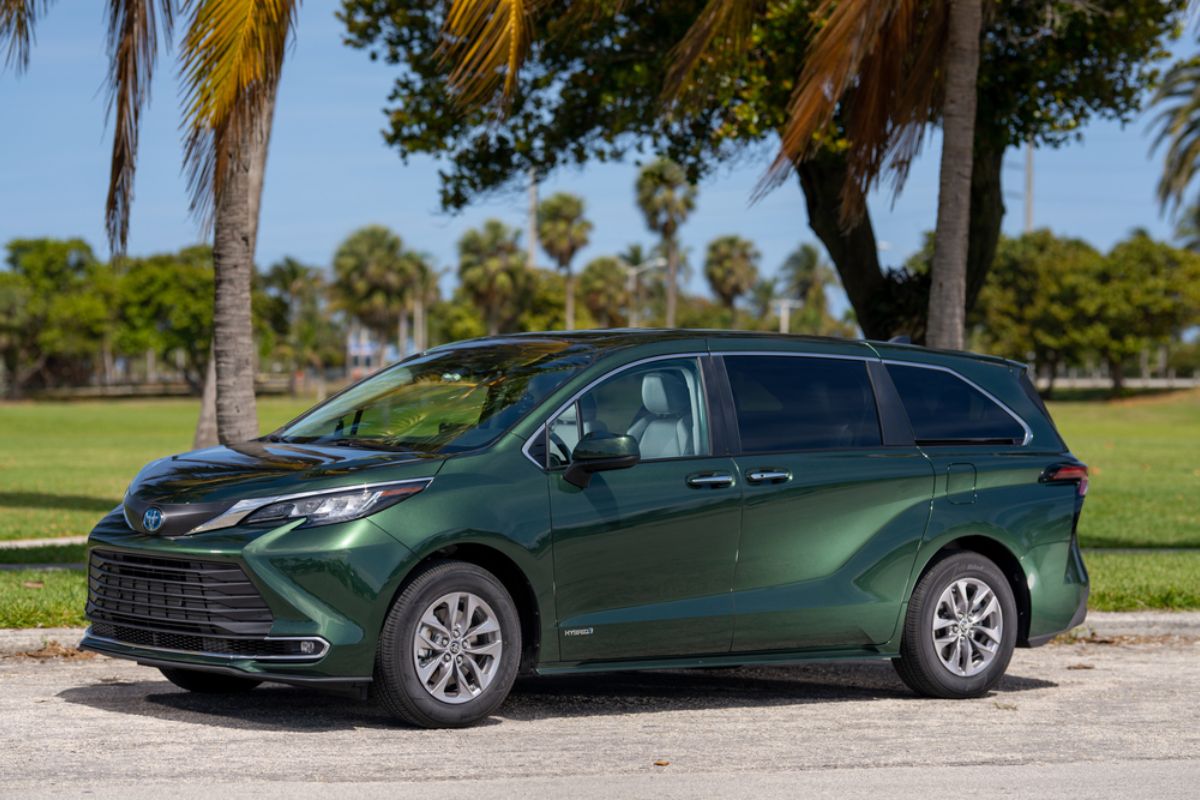 As another favored minivan, the Sienna provides much of the same functionality and space as the Carnival. The Sienna looks a bit more like your classic minivan than the Carnival because it’s not as boxy or sporty. Something about the Sienna’s design just has a bit more classiness to me. It’s a pretty car, for a minivan!

The base model starts at $34,710 MSRP and the high-end platinum model starts at $50,725. It has 245 hp and an impressive towing capacity of 3,500 lbs. It comes as an 8-passenger vehicle standard but can seat 7 if captain’s chairs are put in the second row. It gets 36 MPG city/hwy, which is pretty good for a gas vehicle. 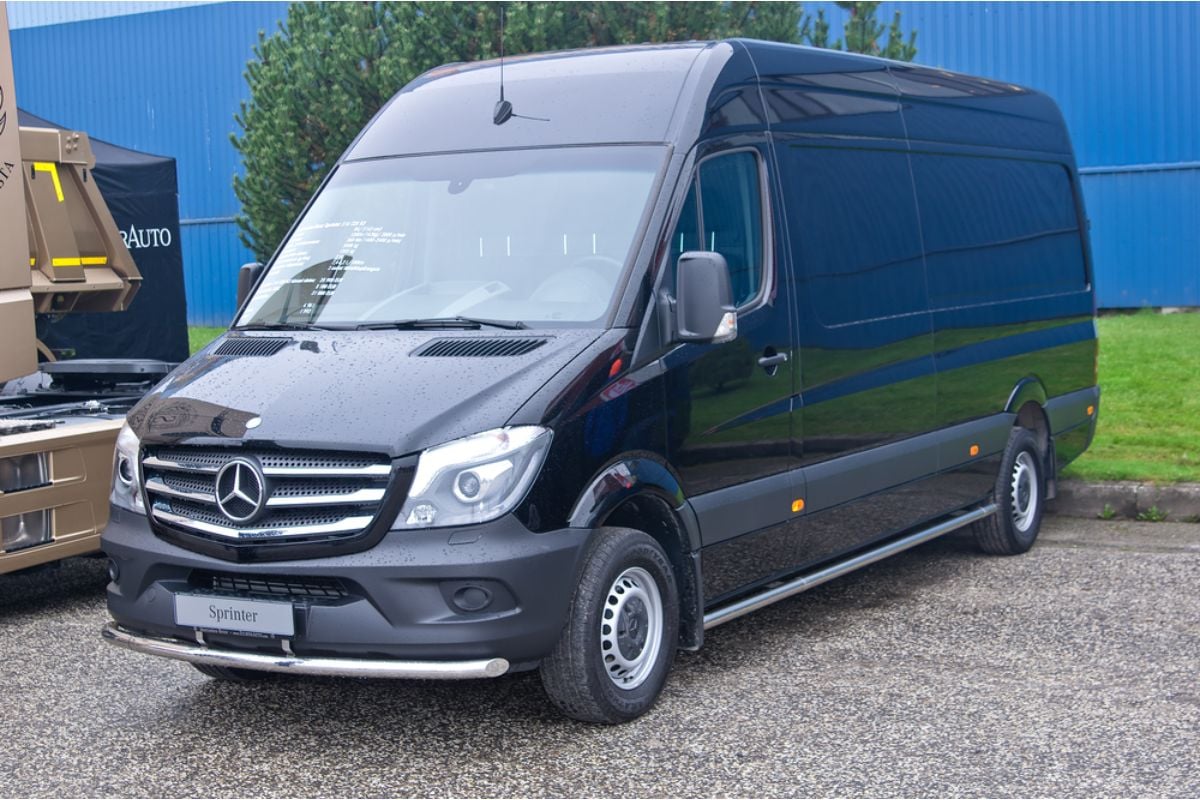 The Mercedes Sprinter Van has been geared traditionally as a commercial vehicle, but in the past few years, it’s become popular among large families who want a car that can double as an adventure vehicle.

While this car is technically a van, it’s not the same as a mini-van. It does have a sliding door like the Carnival, but the sprinter can only open on one side for its 15 passengers. It has much more head space than the Carnival, but still maintains a sporty vibe for a large van-style vehicle.

Unlike other Mercedes vehicles, this one was not built for speed! It is not very fuel-efficient, as it gets about 14-15 MPG. It can tow up to 7,000 lbs, putting its towing capacity well past the average minivan. 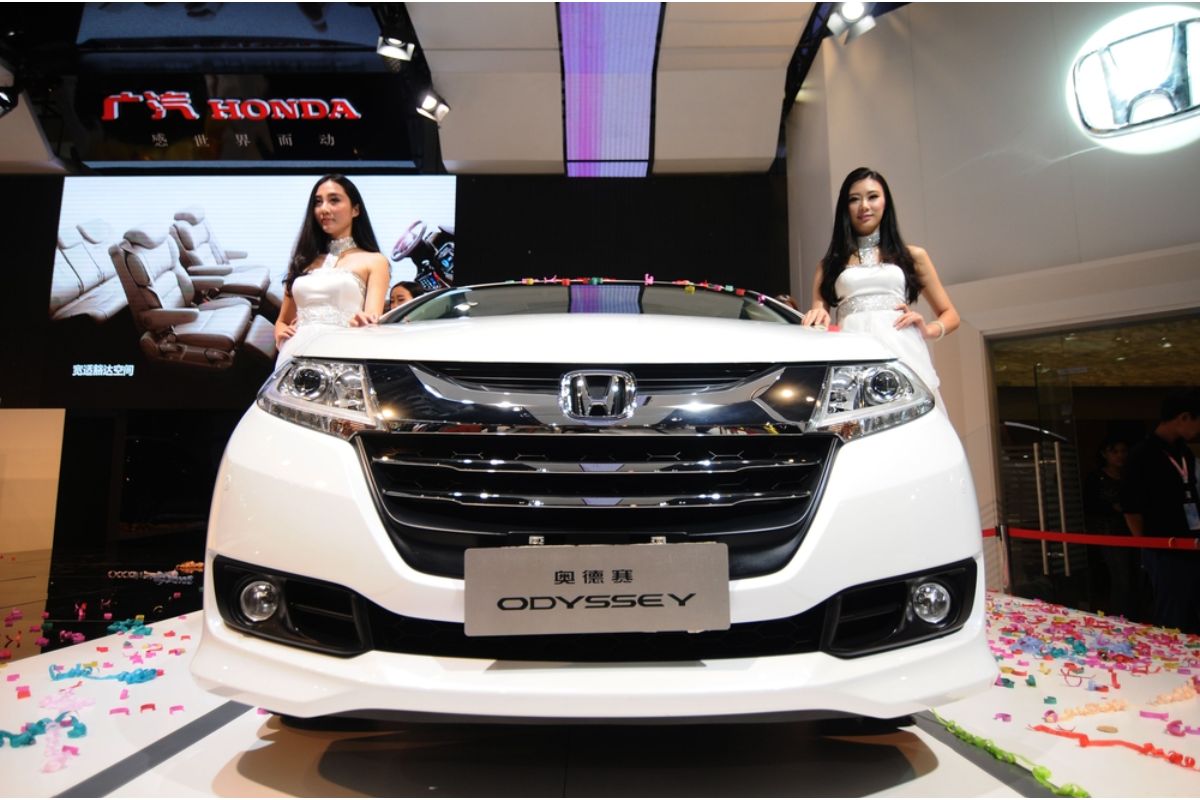 The Odyssey is a classic favorite, known for its longevity and durability. Honda, like Toyota, is a very trusted brand, especially when it comes to minivans. I definitely prefer the exterior of the Carnival, but the Odyssey’s interior has a spacious feel and a clean, simple dashboard. 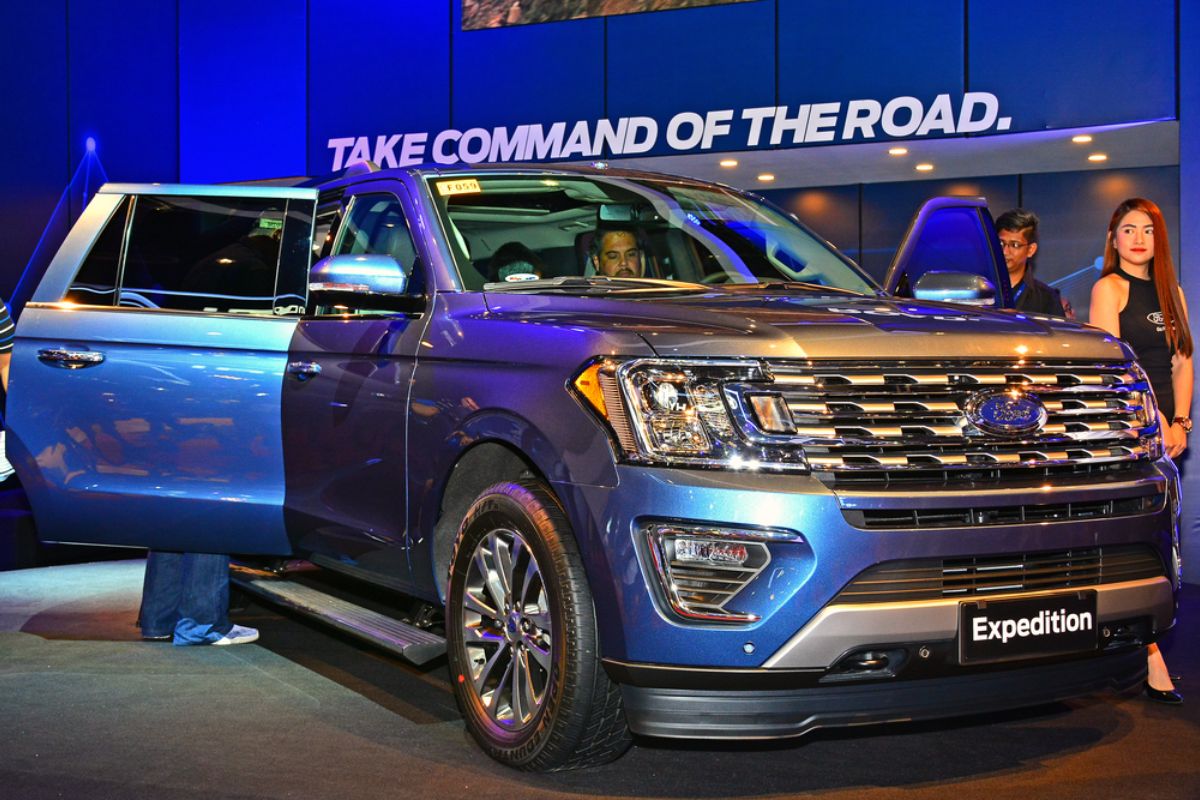 The Ford Expedition recently got a major redesign and in some ways, its sporty, boxier design is comparable to the Carnival, minus the fact that it is an SUV and not a minivan.

With room for up to 8 passengers, this car is incredibly spacious. I love the optional running boards that pop out when you open the doors, and its center console is so deep that it fits a Venti Starbucks inside. 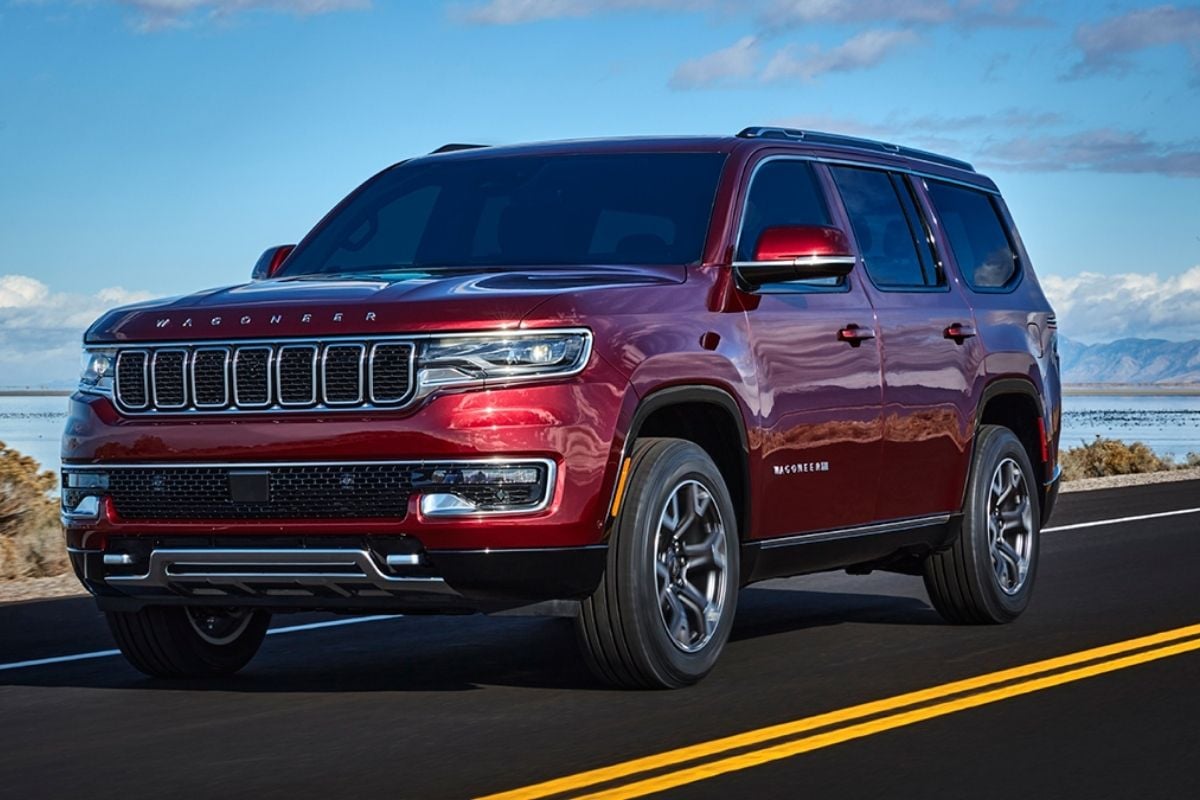 I wanted to include the Wagoneer for some perspective on what’s available for a “family” car. If you’re looking at the Carnival, chances are you’ve considered suburbans as well.

I’ve always liked Jeep cars. I think they can be really sporty and fun. The Grand Wagoneer is Jeep’s take on the suburban, and its interior is really impressive and luxurious. But it’s pricey! Low-end trims start at $58,995 but can surpass $100,000 after additional features and packages are added on. 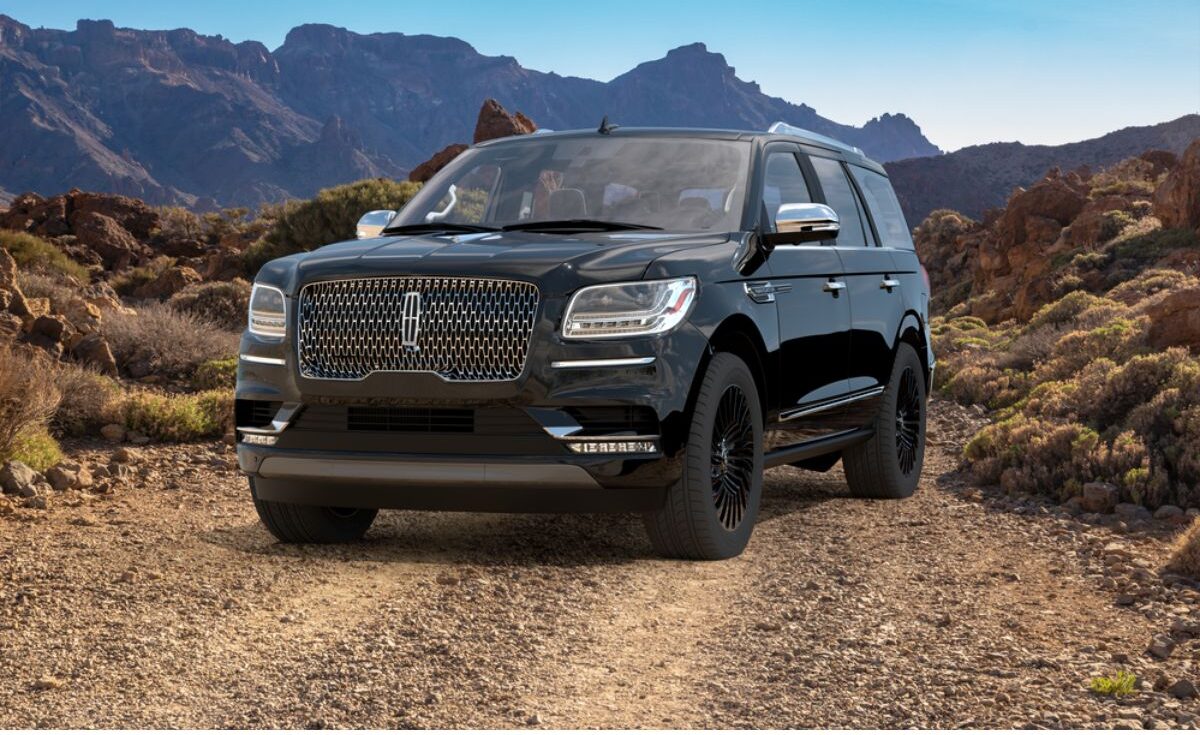 The Lincoln Navigator is another large-capacity vehicle, like the Kia Carnival, that is ideal for families in need of an extra room in their car. The Lincoln Navigator underwent a major redesign in 2018, and it just keeps improving each year. I personally love how luxurious and edgy its exterior looks, and its interior makes you feel like royalty. 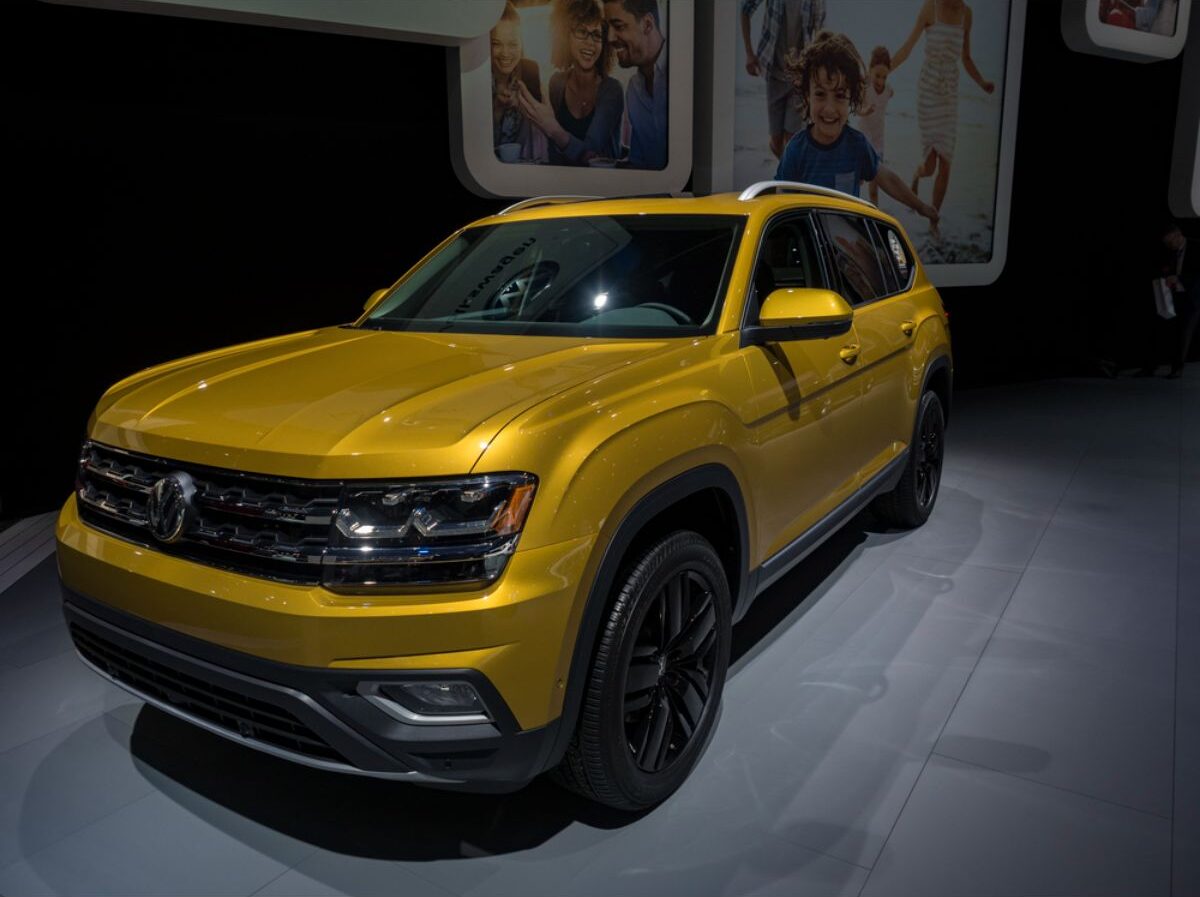 The VW Atlas is a newly popular family car, much like the Kia Carnival. It fits up to 7 passengers, but it’s not quite as long as the Carnival, so you’re going to be a bit more squished in.

However, someone in my extended family recently bought a VW Atlas and she can personally attest to the spacious legroom in the third row.

I love the wide and sporty look of the Atlas, the sharp angles on the trunk, and the headlight design. It’s a very snazzy SUV if you ask me. 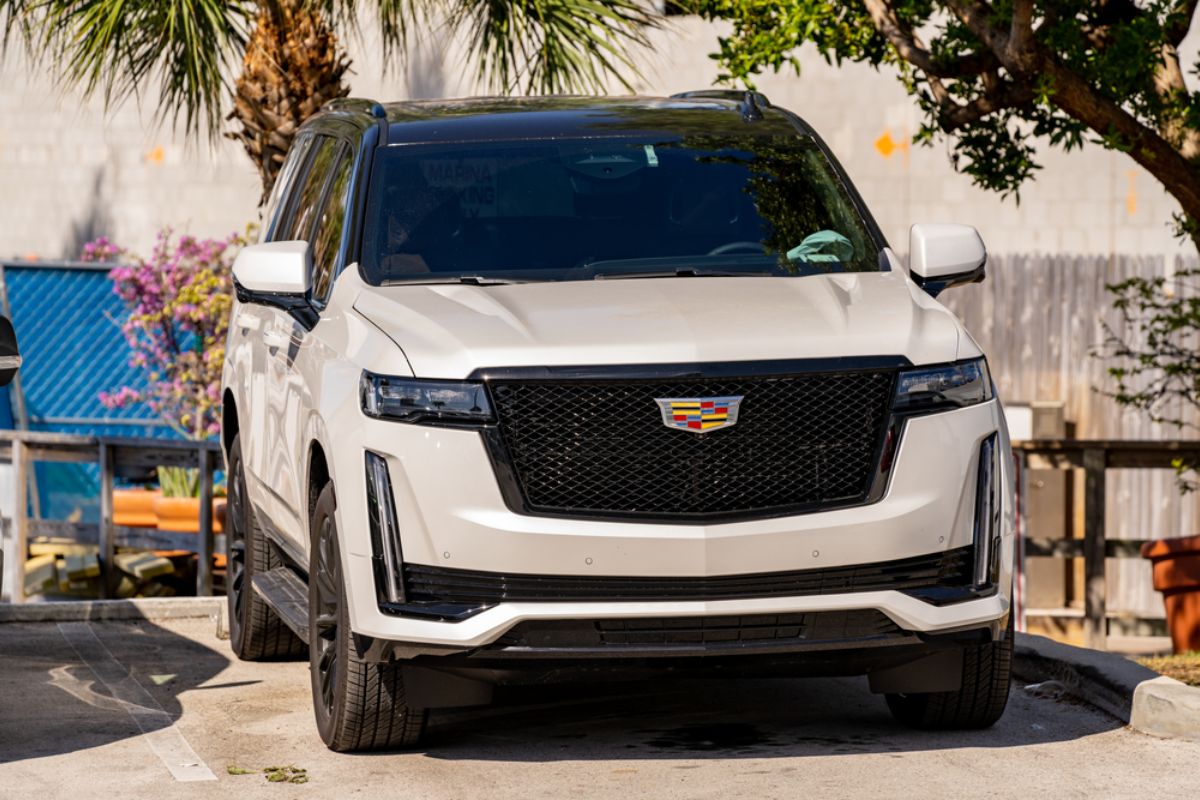 If you’re looking for a luxury alternative to the Kia Carnival, the Cadillac Escalade is a solid option. It seats about the same number of passengers (7) but in an SUV format. It is a fancier, more luxurious design than the Carnival, with an MSRP starting at $76,295.

It tows up to 7,700 lbs, but personally I’d be nervous towing something behind such a beautiful vehicle. But that’s just me! With 420 hp, it gets to 60 seconds in 6.1 seconds, which is a bit faster than the Grand Wagoneer.

It does come in a hybrid version, which is impressive for the luxury SUV segment of the market. The standard gas model gets 21 mpg in the city and 27 mpg on the highway. 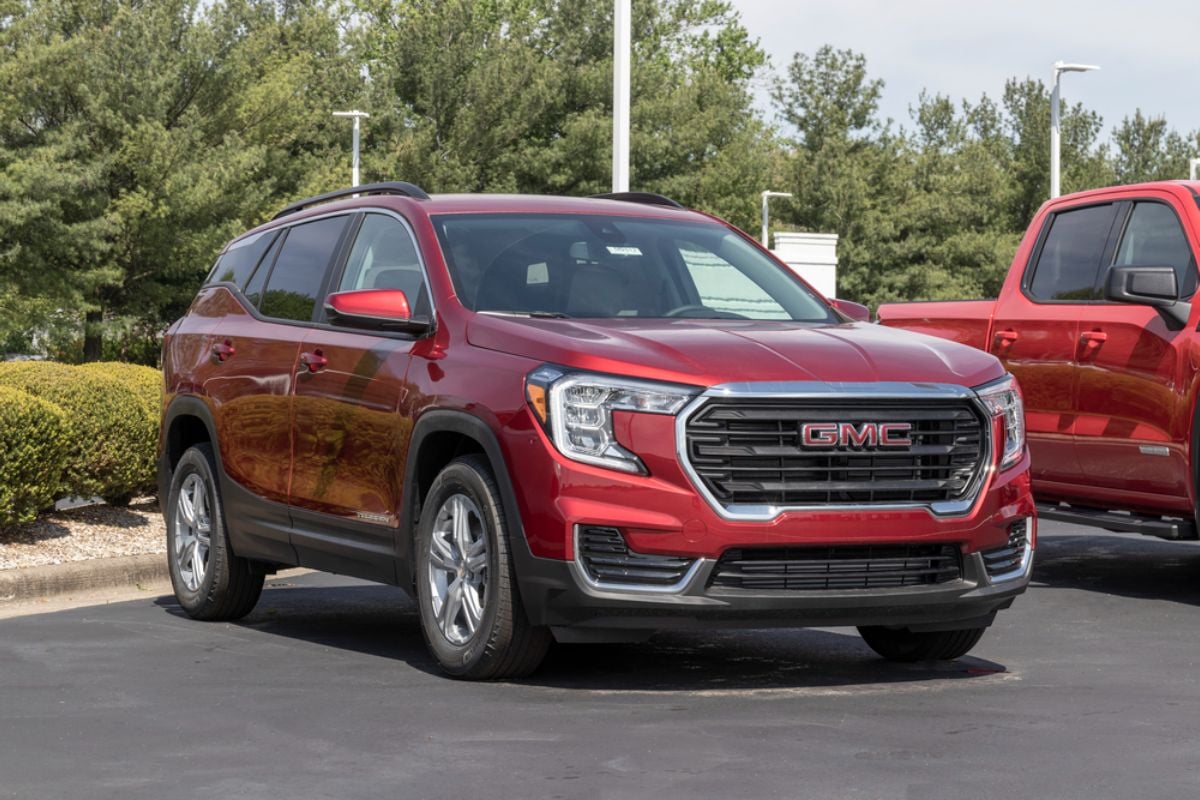 Rounding out the SUV-side of this list of cars similar to the Kia Carnival is the Yukon XL Denali. The sporty side door of the Carnival reminds me of the GMC and Ford-style SUVs. Can you see it? The Denali, like the Carnival, has 3 rows of seating for 7 or 8 passengers, depending on the configuration.

The Yukon XL Denali’s mass does not hinder its power. Its 420 hp propels it to 60 mph in 6.1 seconds. If fuel economy is a priority for you, this vehicle is good, but obviously not great. It gets 21 mpg in the city and 27 mpg on the highway.

Should I get a minivan or an SUV?

If you’re dealing with car seats for your babies and little ones, a minivan is going to beat the SUV for convenience every time. Minivans have automatic sliding doors, and are low to the ground, making it easy for little legs to load themselves into the car.

However, if you’re set on luxury or towing capacity, you’re probably going to find more of that in an SUV, especially if your family goes trailer camping or boating often.

Some families will get a minivan when their family is starting out, and then transition to an SUV once the kids have grown and there’s no longer a need for car seats and stroller storage.

Some families just go with an SUV from the start, as they refuse to be “minivan people.” But consider yourself warned, once you’ve experienced the smooth convenience of a minivan, you may never go back.