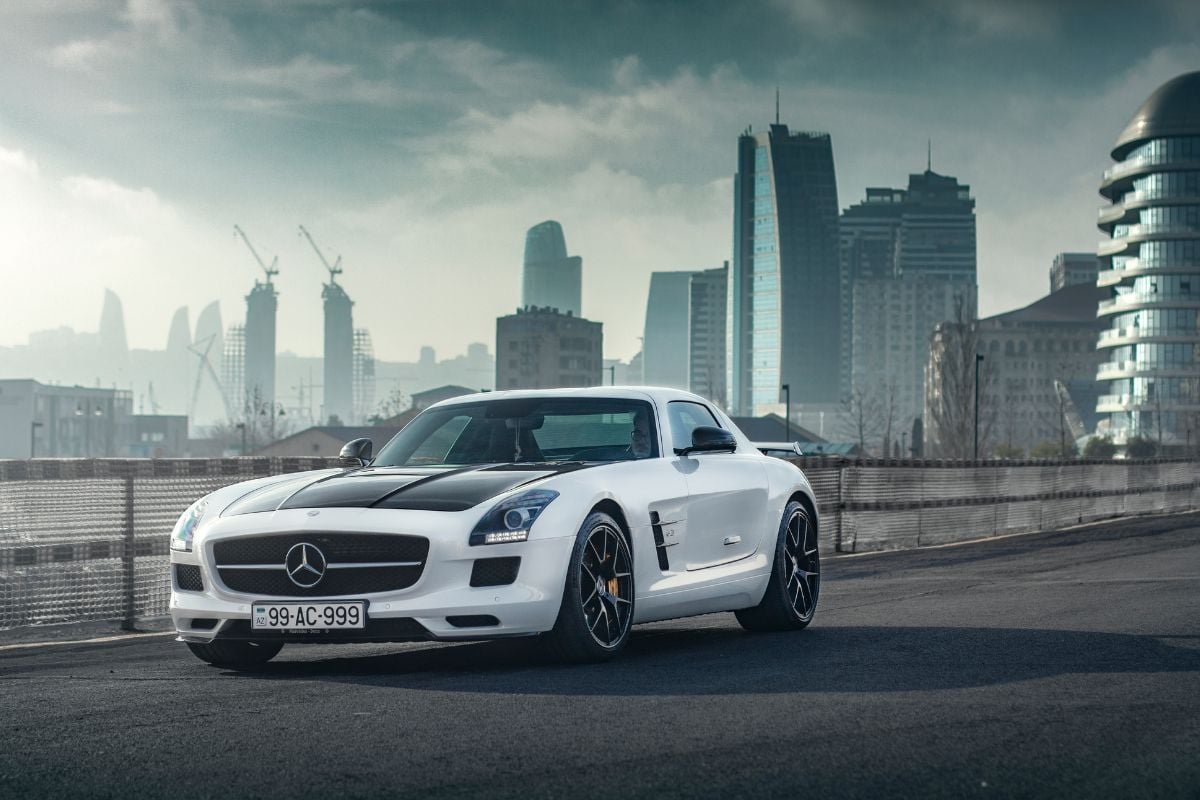 When Mercedes-Benz released the AMG GT, they created a car that was more than just a sports car. They made a car that would show off the amazing engineering that they had been perfecting for years.

Described as ” a rare beast; in the sense that it’s both unattainable and that it makes you feel like a superhero behind the wheel,” the 2021/2 Mercedes-Benz AMG GT is for the go-getters that are adventurous at heart and have a taste for the good life.

Styled to be super-sexy and enticing, the posy Mercedes-Benz GT 2021/2 comes in a Coupe and Convertible. For 2021/2, there are eight different trim levels on offer. Among them, are the AMG-GT C (Coupe), AMG GT C (Convertible), AMG-GT R (Coupe), the AMG GT Night Edition (Coupe), and the GT Black Series. The new Black Series is the apex GT coupe, constructed using lightweight materials and a host of track-focused modifications. It features a flat-plane-crank version of AMG’s twin-turbo V-8.

The interior is designed with both the driver and passenger in mind. The stylishly comfortable, high-quality leather seats are designed to hold the driver in place during fast turns and to provide maximum comfort during long rides. The front seats come ventilated. It also has adjustable lumbar support and adjustable thigh support. Passive hands-free entry and a 10-speaker Burmester sound system are also available.

The dashboard is terrifically designed. On display is a fabulous 12.3-inch fully digital gauge cluster. Similar to the Porsche, the GT’s drive-mode selector dial is accessible on the steering wheel. Roadsters have a power-operated top that drops in seconds. With all of these features, it is no wonder that the Mercedes-Benz AMG GT is one of the most sought-after cars on the market today.

The Mercedes-Benz AMG GT has a 4.0-liter twin-turbo V8 engine. All the versions of the AMG GT come with an automatic gearbox set-up and a dual-clutch 7-speed transmission, and a 4MATIC all-wheel drive. However, depending on which model you select, the hand-built engine will deliver a different output level.

The base GT produces 523 horsepower. It comes standard with adaptive dampers and a limited-slip rear differential. As for the GT C and GT R engines, they respectively make 550 and 577 horsepower. Featuring a flat-plane-crank version of AMG’s twin-turbo V-8, the Black Series is a legalized street race car that churns out 720 horses. This combination of the Mercedes-Benz AMG GT’s trim levels makes them perfect vehicles for cruising on the highway, winding on mountain roads, or legally racing on the streets. 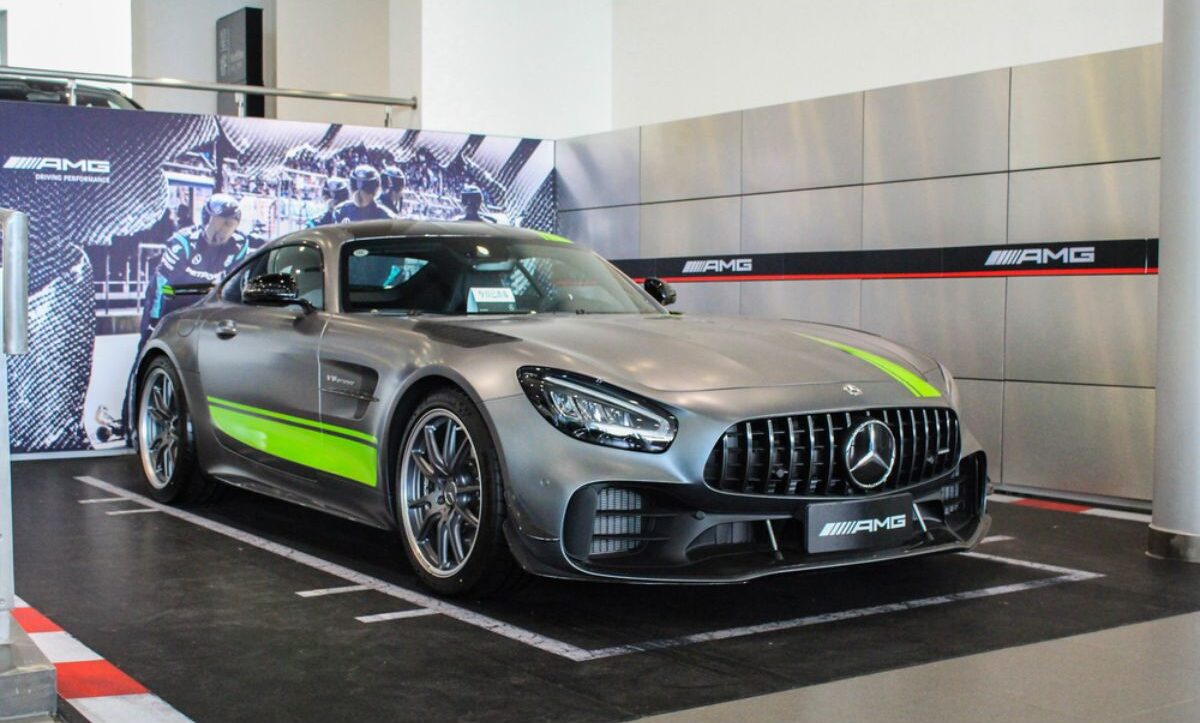 The Mercedes-Benz AMG GT can reach speeds of up to 198 mph. It has a claimed takeoff speed of 0-60mph in some 3.7 seconds.

As you can imagine, the 2021/2 Mercedes-Benz GT super-speed range of sexy configurations comes at a premium. Starting at $120, 000 for the AMG GT Coupe, it climbs almost threefold to $326,000 for the AMG GT Black Series.

Conventionally, the sporty AMG is a two-door, two-seater intimately designed for two.  Though the 2020 models had a four-door, five-seater.

Should you be thinking about boot space, with 10 cubic feet of cargo space, the GT’s trunk is twice as large as that of its competitors.

Speaking of the competition, find below some rivals of the AMG GT.

The 2021/2 Mercedes-Benz AMG GT’s features and specs put it in comparative competition with its key rivals of…….. 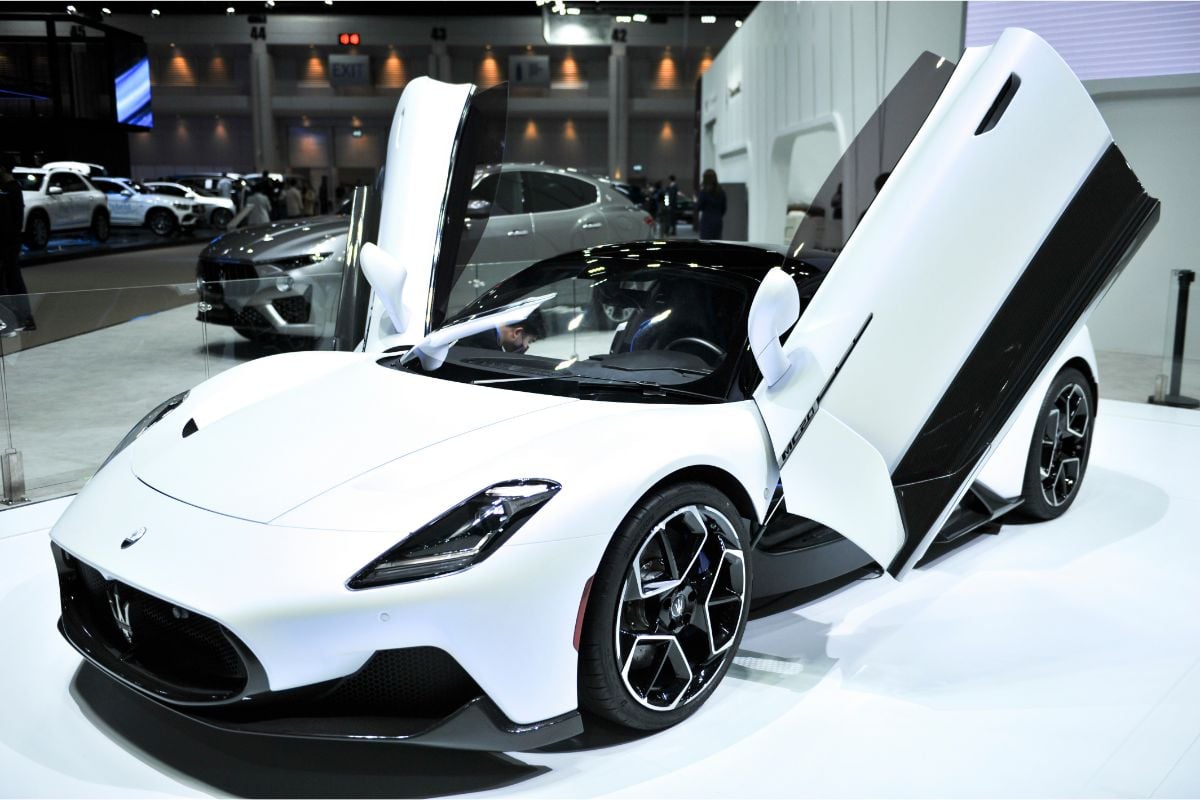 Similar to the AMG GT, the Maserati MC 20 is also a luxurious sports car that is designed to provide its owner with a high-performance vehicle. Other than this obvious fact, however, the engine and fuel type, fuel efficiency, and seating are also most similar.

Just as sexually angular and sinewy as the AMG GT, the MC 20 is comparatively just as beautiful.  Akin to the AMG GT, the MC20’s exterior has also been designed to look sleek and sophisticated, with tasteful luxury touches. However, whereas the AMG GT can be found as both a coupe and a convertible, the MC 20 comes only as a coupe.

The interior of the car is arguably a little more spacious, but not as comfortable and endowed as the AMG GT’s. Upward-opening ‘butterfly’ doors give you access to a two-seat cabin and the MC20’s quaint and clean interior design. The center console has only the essential controls dotting it. Black leather seats with dark blue contrast stitching, aluminum pedals, and carbon fiber trim cover the cabin. A digital rear-view mirror equipped with a rear-facing camera assists with rear visibility.

See also  Why are Jeeps so Popular?

When it comes to what’s under the hood, the MC20’s all-new twin-turbocharged V-6 engine is more powerful than that of the AMG GT. This is understandable considering that the MC20’s new engine utilizes a unique twin-combustion system borrowed from Formula 1 race cars and is paired to an eight-speed automatic transmission. Called Nettuno, the MC20’s engine pumps out 621 hp, compared to the GT C and R’s best 550 horses.

Given its powerful engine, the MC 20 is capable of going from 0-60 in 3.2 seconds-some 0.3 seconds faster than the AMG GT. However, both have quick acceleration and their handling is race-car sharp. Despite this, they handle well enough for daily driving and for taking on road trips.

Similar to the AMG GT, the 2022 Maserati M20 also fires on Premium Unleaded Petrol. Equally, at 11.5L per 100km, its fuel efficiency matches that of the AMG GT. Both high-powered sports cars’ fuel economy isn’t anything commendable. The MC20 coupe model is rated for 15 mpg city and 25 mpg highway. That’s a little better than the Mercedes-AMG GT’s ratings, which are rated at a highway fuel economy of 22 mpg in its most efficient arrangement.

Similar to the AMG GT, the MC20 is a two-seater coupe that’s focused on the driver and his/her sole passenger.

Both cars’ trunks are large enough to hold seven days’ worth of luggage. 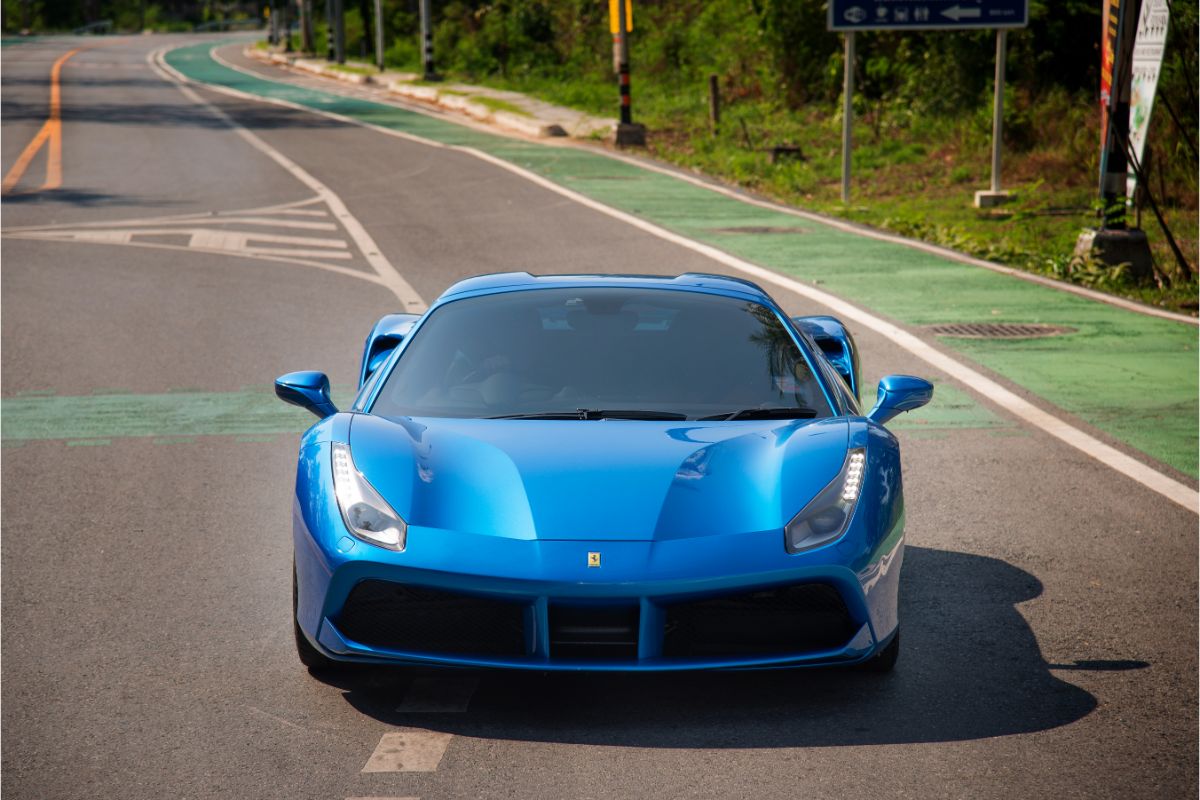 In another classic case of Germany meeting Italy, the Ferrari 488 almost also “Speaks German”. Its exterior, engine, and fuel types, as well as fuel efficiency, are more or less that of the AMG GT.  Like the former, the equally curvaceous 488 Pista offers almost the same if not better handling, rocket-speed acceleration, and a comfortable cabin.

Crafted by the legendary Ferrari nameplate, this sleek, broad-shouldered, bulging-fender supercar with an arching roof is the stuff of dreams- the exterior is ideally embellished with a jaunty racing stripe. Other standard exterior amenities include heated, power-folding side-view mirrors; LED taillights; rear fog lamps; and rain-sensing windshield wipers.

Inside, for a  two-door sports car, its cabin is surprisingly spacious. Similar to the AMG GT, the cabin features standard equipment such as one-piece racing carbon-fiber seats, a manually adjustable tilt-and-telescoping steering column, dual-zone automatic climate control, and keyless entry and ignition.

Almost similar to the AMG GT’s twin-turbocharged 4.0-liter engine, the 488 comes with a 3.9-liter V-8. This engine generates a monstrous 711 horsepower and 567 lb-ft of torque. As with the AMG GTs, a seven-speed automatic gearbox also governs the proceedings, sending power to the car’s rear wheels.

As you can expect, this macho Italian rockets from a standstill to 60 mph in less than three seconds- to be exact, it makes the sprint from zero to 60 mph in a mere 2.7 seconds.

When it comes to the price range, buyers beware; the 488’s power and speed come at a cost. Found in only two trim levels, the Pista Coupe demands $331,000, while the Pista will set you back not less than $351,000-closer to the GT Black Series than any other of the AMG GTs.

Both cars are sports cars, they come with twin doors and seating for two.

Unlike the AMG GT, the 488, typical of cars in this category, there’s hardly a lot of cargo space. The 488 Pista offers a mere six cubic feet of room for luggage. 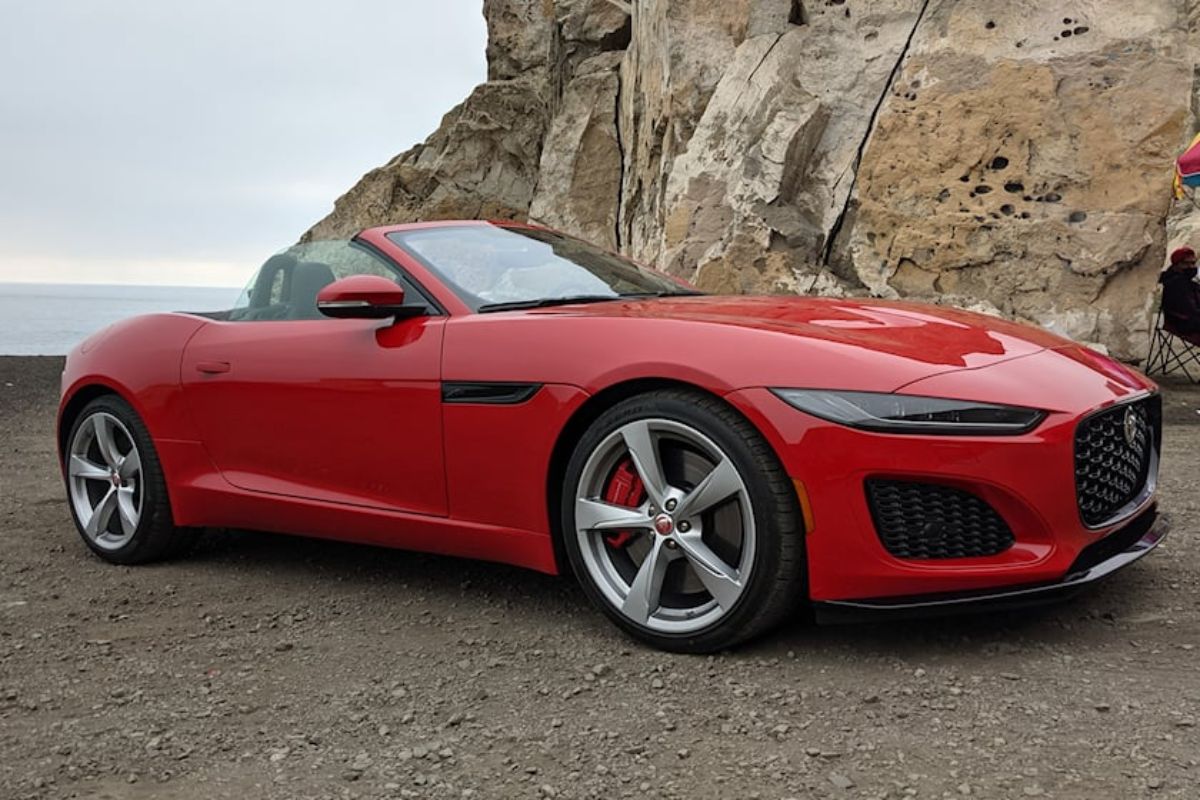 Coming with just the right amount of Jag heritage, the F-Type speaks some of the AMG GT’s German in terms of its convertible shape, engine, fuel type, and efficiency. Folded into a high-tech package, with a simple choice of supercharged V6 and V8 engines, in supremely sleek convertible bodies, the F-Type shares quite a range of similarities with the AMG GT.

Over time, the F-Type has become even more complex, as it too, like the AMG GT, has seen the arrival of a coupe version, powerhouse R.  As with the AMG GTs, both the F-Type’s coupe and convertible are exciting and entertaining to drive.

The cabin is arguably tinier than that of the AMG GT. However, like the AMG GT, it comes standard with leather and microsuede seats, a power-adjustable steering column, a Meridian stereo system, and front and rear parking sensors.

Although supercharged with a 5.0-liter V-8, like the AMG GT, but, similar to the AMG GT, it too makes between 444 and 575 horses. For 2022, similar to the AMG GT, the F-type is now only available with a V-8 engine under the hood. It, however, drops the previously standard turbo four-liter. Almost like the AMG GT’s Black Series, it’s essentially a detuned version of the 575-hp V-8 that motivates the higher-performance R variant. Both are offered with all-wheel drive, although the F-Type’s new P450 comes standard with rear-wheel drive.

With standard all-wheel drive and the same eight-speed automatic as the P450, the R coupe roared to 60 mph in 3.5 seconds. Not that much faster than the AMG GT.

Akin to the AMG GT, the F-Type also uses PULP. Its fuel efficiency stands at 11,3 per 100km. The 575-hp all-wheel-drive F-type R has an estimated rating of 16 mpg in the city and 24 mpg on the highway, closer to the base GT than other trim levels.

Seating is sports car conventional at two. However, an option for 12-way power seats with heated and cooled surfaces as well as memory settings for the F-Type’s seats is available.

Given the F-Type “convertible’s hilariously small trunk”, the AMG GT trumps it on cargo. 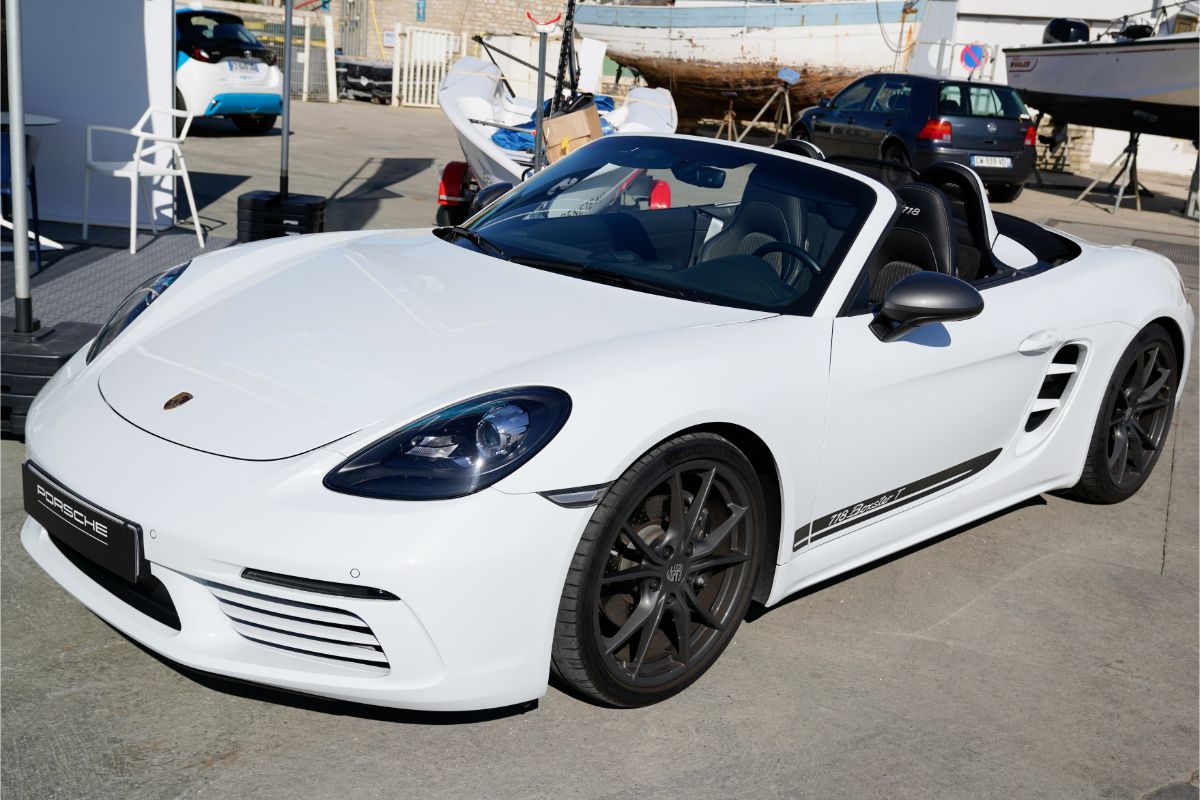 Like the Mercedes-Benz brand, since 1963, the Porsche 718 has been one of the most iconic sports cars on the market. Both are famous for their elegant and distinctive shape, long hood, and prominent headlights. They are also known for their power and speed.

However, the vehicle is a four-seat, two-door coupe with a rear-mounted engine. With the classic design and power, the Porsche 718, like the AMG GT, is a great choice for someone looking for an affordable, yet still a stylish sports car.

While most believe that the iconic 911 is the Porsche to buy, in reality, the Porsche 718 Boxster is actually the better sports car to drive around corners and it’s also a lot less expensive. Coming with a power-operated fabric roof that can be put down or up to 50km/h in a reasonable amount of time, the Boxster typifies the “wind in your hair” sports car.

Given its smaller powertrains, the Boxster is slower to the 0 to 60 miles per hour mark. It reaches 60 in 4.3 seconds.

Like the AMG GT, the Boxster’s fuel efficiency is 9.7L/100km on PULP. Similar to both the GT C and the GT, the base Boxster, with a turbo 2.0-liter flat-four and six-speed manual, earns 20 mpg in the city and 26 mpg on the highway. According to the EPA, choosing the seven-speed dual-clutch automatic will earn you 1 mpg more in each category.

Both sports cars come with two seats-though the Boxster’s cabin is far from roomy.

Neither can the Boxster compare with the AMG GT in truly useful storage space. Other than a front and rear cargo compartment, the best the Boxster can do is one carry-on suitcase in the back and two in the trunk.

In case the list above is still not exhaustive enough for you, you might also investigate the following non-electric vehicles similar to the Mercedes-Benz AMG GT, that time permitting, I would have loved to discuss:

In the meantime, below are some frequently asked questions relating to the Mercedes-Benz you might be interested in too.

Q: What does AMG GT stand for?

Q: What is the ground clearance of the Mercedes-Benz AMG GT?

Q: How many airbags are there in the Mercedes-Benz AMG GT?

A: The Mercedes-Benz AMG GT comes with 8 airbags as a passive safety precaution. Apart from this it also has some amazing safety features.